Annual Ice Out Down The Brule
by Sloth

Trip Type: Paddling Canoe
Entry Date: 04/09/2011
Entry Point: Other
Exit Point: Other
Number of Days: 1
Group Size: 4
Trip Introduction:
A few years ago I read a story in one of Sam Cook's books about an ice out paddle he enjoyed down the Brule River in Wisconsin. That spring we decided to try it for ourselves, and invited another couple to join us. Needless to say, it's a great time, and has become our annual ice out/first paddle of the season for the four of us. Last weekend we kept that tradition alive, and had just as much fun as we always do.
Discuss Trip: View Discussion Thread (7 messages)
Report
We left the cabin around 8:00, knowing that we were to meet our outfitter in Brule, WI at 9:30. The weather could not have been better. Mostly sunny, a little breeze and a forecasted high in the 50’s.  Being our annual first paddle of the season, we never know what we’re going to get.  As we drove we spoke about past trips, especially the one that we got snowed on. It was definitely something new, and an experience we still talk about fondly. It didn’t look like we’d have to worry about snow on this day.

We arrived at Brule River Canoe Rental and were quickly checked in and on our way. Side note: The section of the Brule that we paddle is a very rocky and log-ridden stretch of water and, although we both have canoes of our own; we choose to rent the royalex “tanks” available at the outfitter. They also provide a shuttle to the put-in, which is an added bonus.

After dropping our car off at the Winneboujou landing (our take-out spot), we climbed into the van and enjoyed to ride up to the Stone’s Bridge landing. We immediately noticed that the spring runoff was in full force and that the river was running high and faster than usual. We commented that our normal 4- 5 hour trip may be a little quicker this year. We unloaded and were in the water in a matter of minutes. 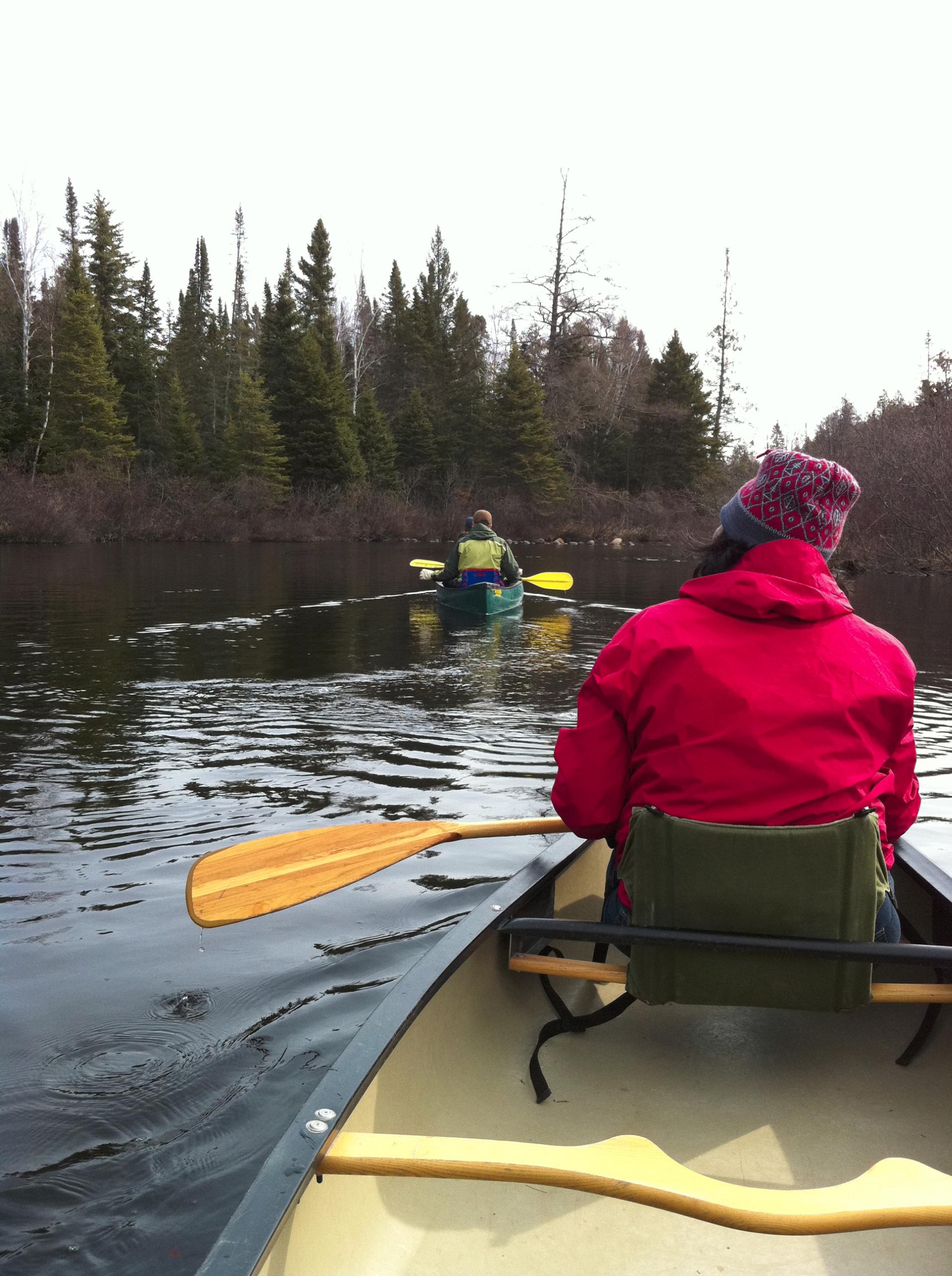 Within five minutes we were completely alone. Nothing but the sound of little creeks joining the larger river, the wind through the cedars and white pine lining the banks, the occasional honk of a goose and our own paddles in the water. 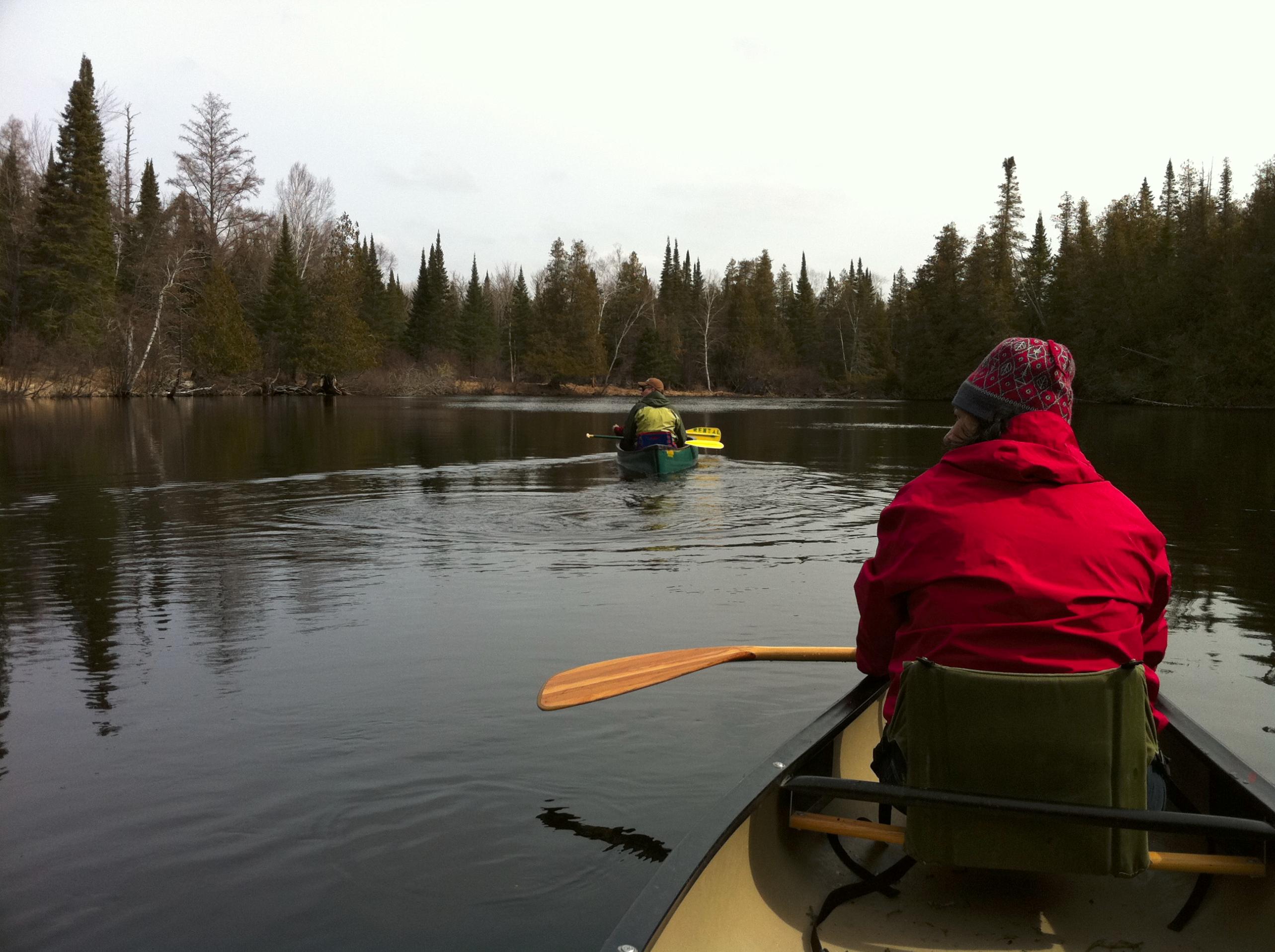 For the next three hours we saw everything this area has to offer: a wide variety of ducks geese, and too many eagles to count. A couple of them launched from their perches and flew directly us, quite a sight! 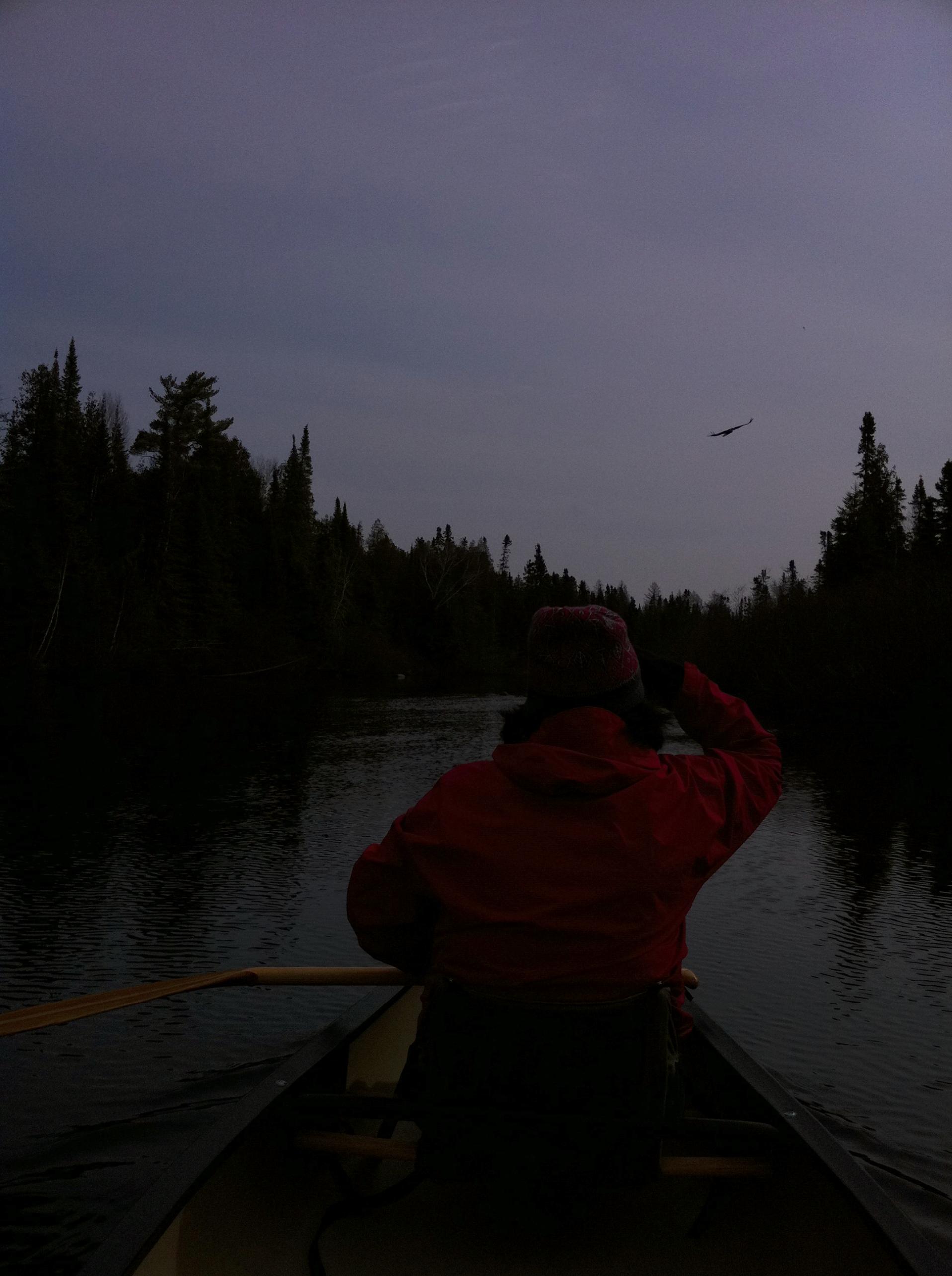 About ½ way down, we started passing the familiar private residences, with their boathouses perched along the riverbanks; harkening back to a bygone era. The largest estate on our route is Cedar Island, which was a presidential getaway in it’s heyday. 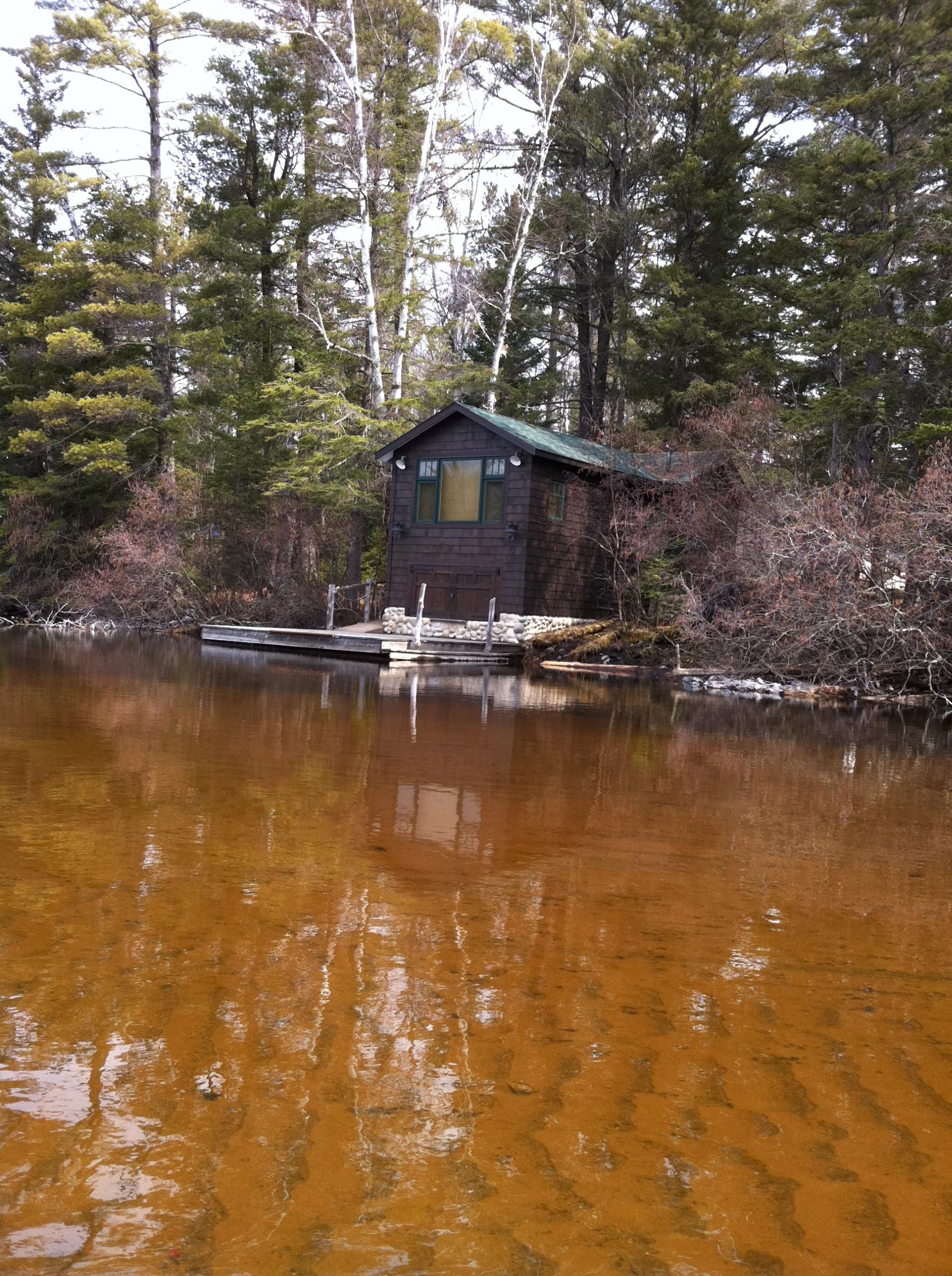 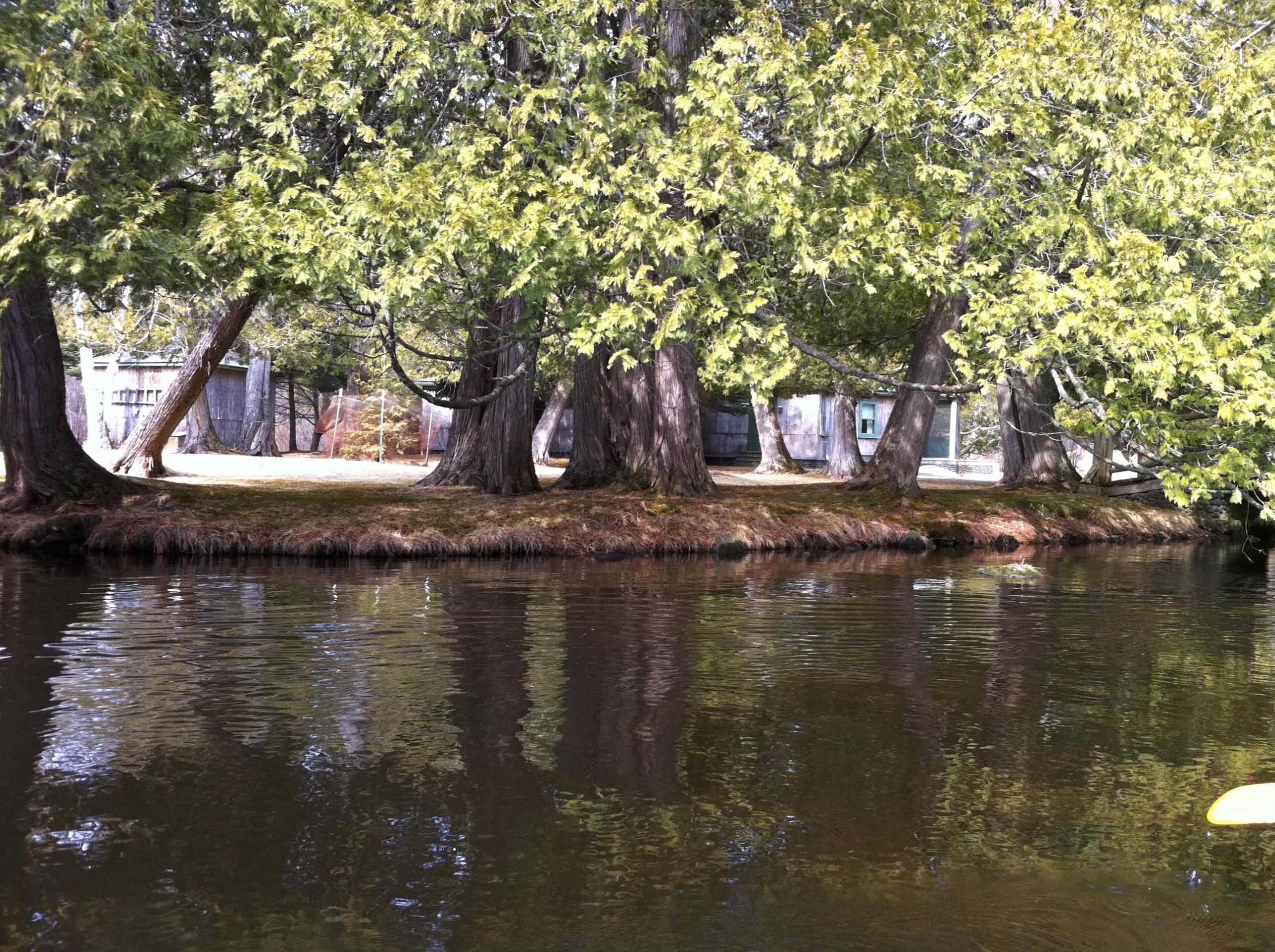 From this point on, the river begins its slow drop to its eventual end at Lake Superior. Small Class I rapids pop up, adding a bit of excitement to the paddle. In between, we stop and enjoy some snacks and beverages, basking in the sunshine. We knew that the increased current this year, our paddle would be over sooner, so we wanted to make it last as long as possible. 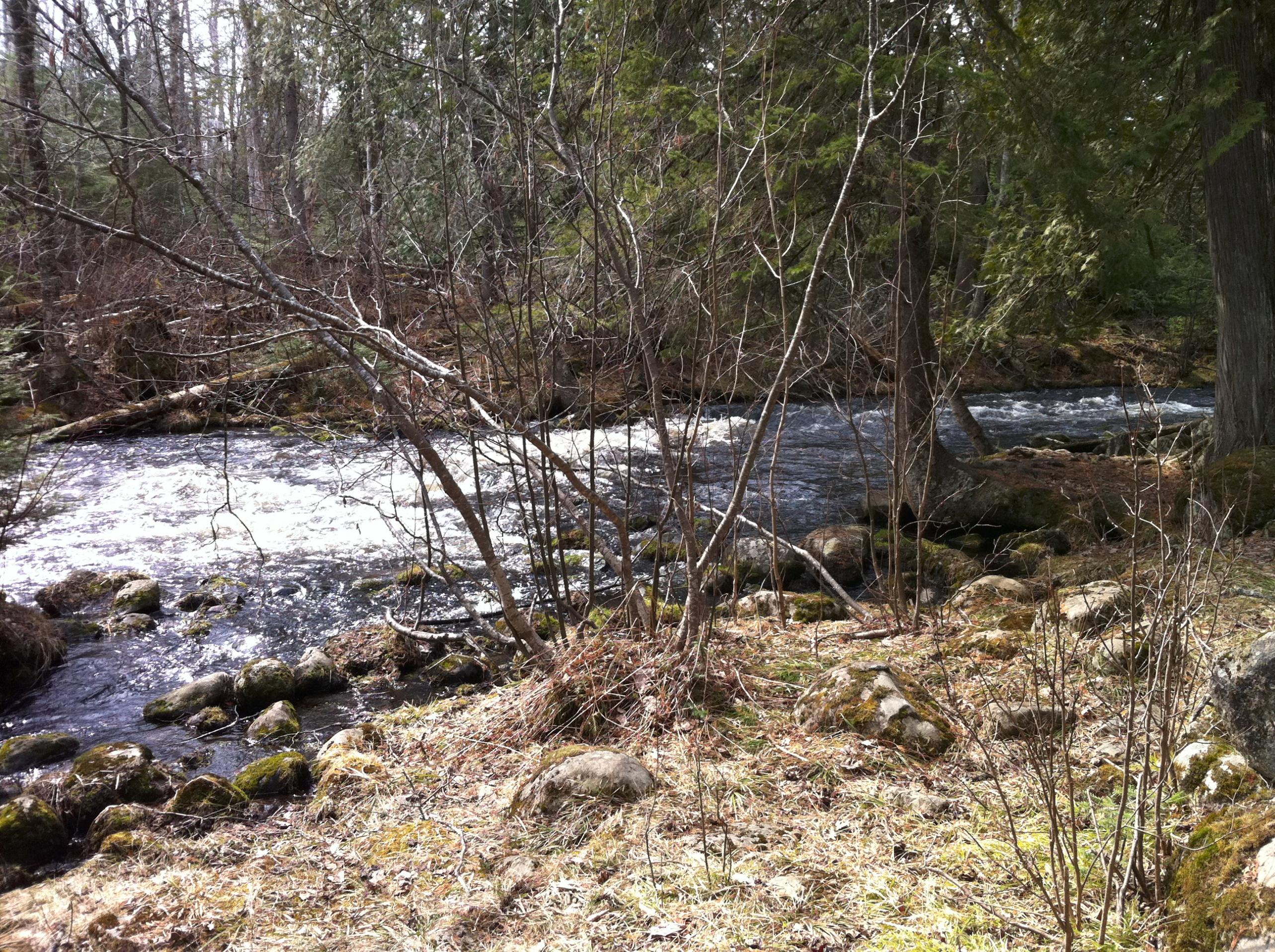 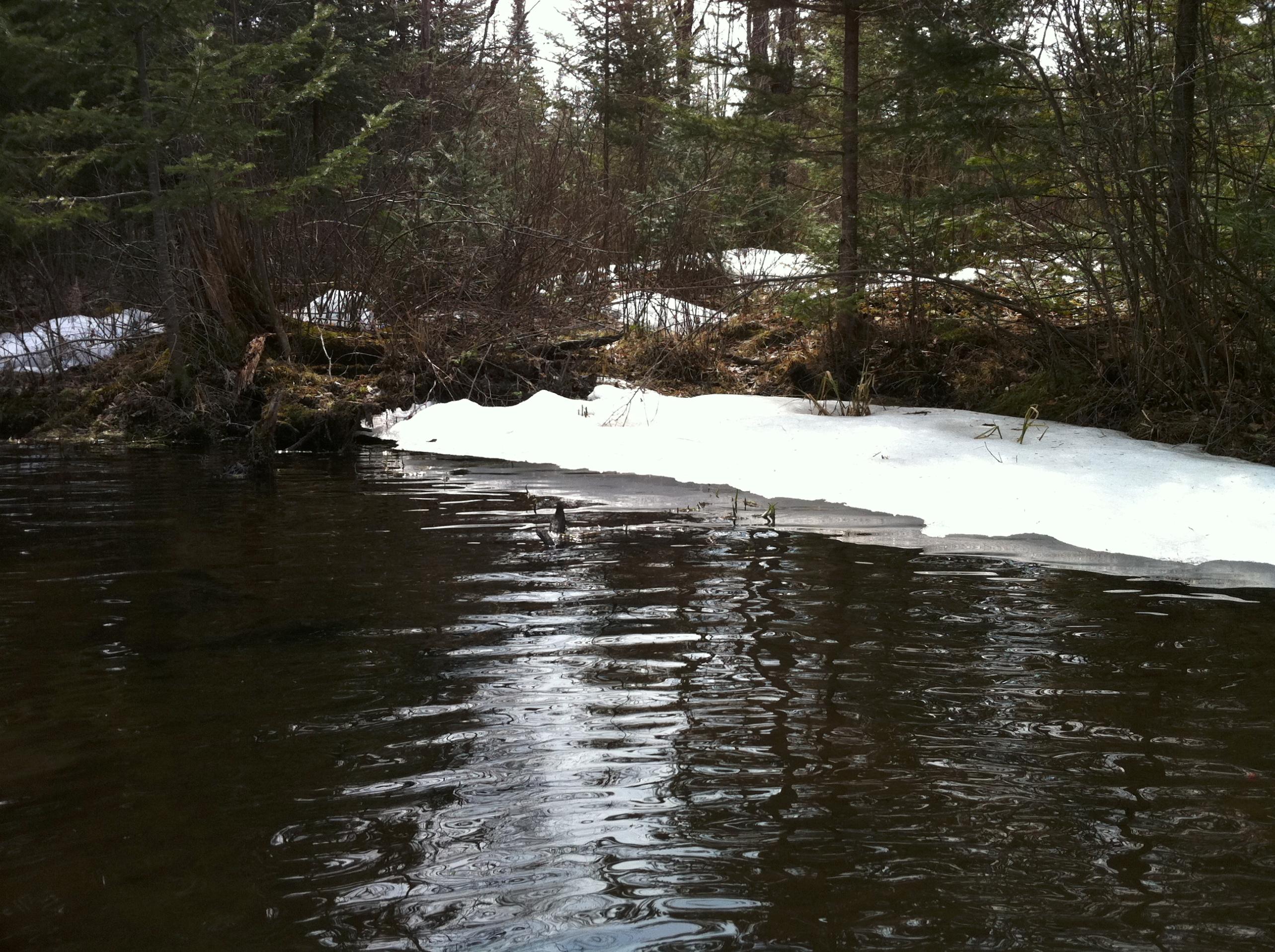 It’s also at this point that we usually start seeing spawning steelhead running under our canoes. We began keeping our eyes open and it wasn’t long before someone shouted “there’s one!”. For the remainder of the trip, we’d see an occasional flash under our canoes.

Before long we were in the final stretch of our route, recognizable by the increased current and small, but constant ripple-rapids. Around the last bend we spot the take-out, visible far too quickly for this day.

The car is loaded up in no time, and we make the short jaunt into Brule for our traditional lunch at Dee’s Twin Gables Café. Nothing better than homemade food after a few hours on the river.  Back in the car, we had back to the cabin to enjoy the rest of a weekend that began better than we could have imagined.