Back to Quetico
by timatkn

Trip Type: Paddling Canoe
Entry Date: 07/30/2011
Entry & Exit Point: Quetico
Number of Days: 7
Group Size: 2
Trip Introduction:
After having our second child right in the middle of the summer last year and missing any type of trip (well worth it) my wife and I make it back to Quetico. We chose Sarah lake entry since that is my wife's namesake.

We actually thought we might not be able to go on this trip since both our children had been under the weather. One had an ear infection, the other a stomach virus. The grandparents said they would be fine with them, but Sara and I did not think it was right to drop off sick kids for the grandparents to watch. We plan for not going but then by Wednesday they mostly recover. Sara drops the kids off at the grandparents on Thursday ---they are now recovered but both of us have a sore throat and just feel run down. We give up packing early as both of us feel exhausted. With plans to wak up early Friday and head up to Ely to the Blueberry festival.
Discuss Trip: View Discussion Thread (19 messages)
Day 1 of 7
Friday, July 29, 2011.
Sleep did not help out illness. We don't feel terrible just liek we need a couple of days of sleep and terribly sore throat. We sleep in--move slow. We end up not getting to ELy until 9:30 PM, but we are here. If we feel up to it we will head in with a tow from Canoe Country. We are supposed to stop into their Ely sho p int he AM to set up the tow. Have dinner at the Ely Steakhouse sharing a broasted chicken meal that we couldn't finish. In bed by 10:30.
Saturday, July 30, 2011


Needed an alarm to get up out of bed by 7:30 and still feel exhausted. I usually need about 6 hours of sleepso I should not feel so bad after 9. We decide though we are up for the trip---eat some granola bars as neither of us have a much for an appetite.

Head over to canoe country---then out to their Moose Lake base. HIt Prairie Portage by 10:15. Portage all of our gear across get in line. There is only one group ahead of us but they have the max number and are takign forever. About 10-15 minutes later a family comes in and buys their fishing licenses. We bought ours ahead of time to apparently save time. Then the main ranger kicks everyone outside due to it is getting noisy with many groups talking to each other. When the big group leaves it is our turn my wife and I enter to get our permits--as we get to the desk the father of the group behind us says we are budging in line. The ranger asks who bought their fishing licenses first, I reply we got ours a month ago--we bought them a head of time? He says he doesn't know who was first, but they go by who buys their fishing licenses first. He says he isn't used to people getting licenses a head of time. "It is the only system we have". Grudgingly we get out of line and let the family a head of us, I am not going to make a scene over a hold up of 15 minutes. Besides apparantly I am wrong even though Sara and I stood in line for 10-15 minutes with NO ONE in front of us. When we get back into the office the Rangers apologize profusly. The female explains that apparantly the father ran across the portage bought his fishing license and then got out of line and fisnihed portaging his gear. That's why it looked like their was no one in line a head of us for so long. She explained that apparantly the family knew the license process and she said, "rudely used it to their advantage by having the father get his license first before he was finished portaging". She said "I wondered why he was gone for so long--then when the rest of the famliy came in later and got their licenses before you--it never occured to me you already had your license". She said, "If I would of figured out what they were doing I would have made them wait behind you." I thanked them for the apology and said it was no big deal 10 extra minutes is not goign to change anything on our trip. I understand it is confusing with so many groups coming into the station they have to have some method of keeping people straight and no proces can be perfect.
We shove off at Prairie. Dark clouds and lightning are in the distance but look like we will be on the edge. We push hard to get to the "yellow Brick road" before lightning is close. As we cross Burke we get a very light rain and th edark cloads just passed to the south takign the lightning with them. That woudl be the last clouds we see the rest of the trip :)
Coupole of easy portages we are on North Bay. We stop at an Island camp for lunch. We still don't have any energy. The heat, 85 degrees and sun beating down on us is sapping what little we have left so I suggest we just cmap on the island. What's the hurry, a few days ago we weren't sure we would even be in ELy. THat sort of became the Mantra for the trip.
S L O W L Y we set up camp. Relax, swim to cool off. Eventually have dinner, grill a steak with spinach salad. WIth a glass of Merlot. Black box merlot isn't too bad in the canoe country. 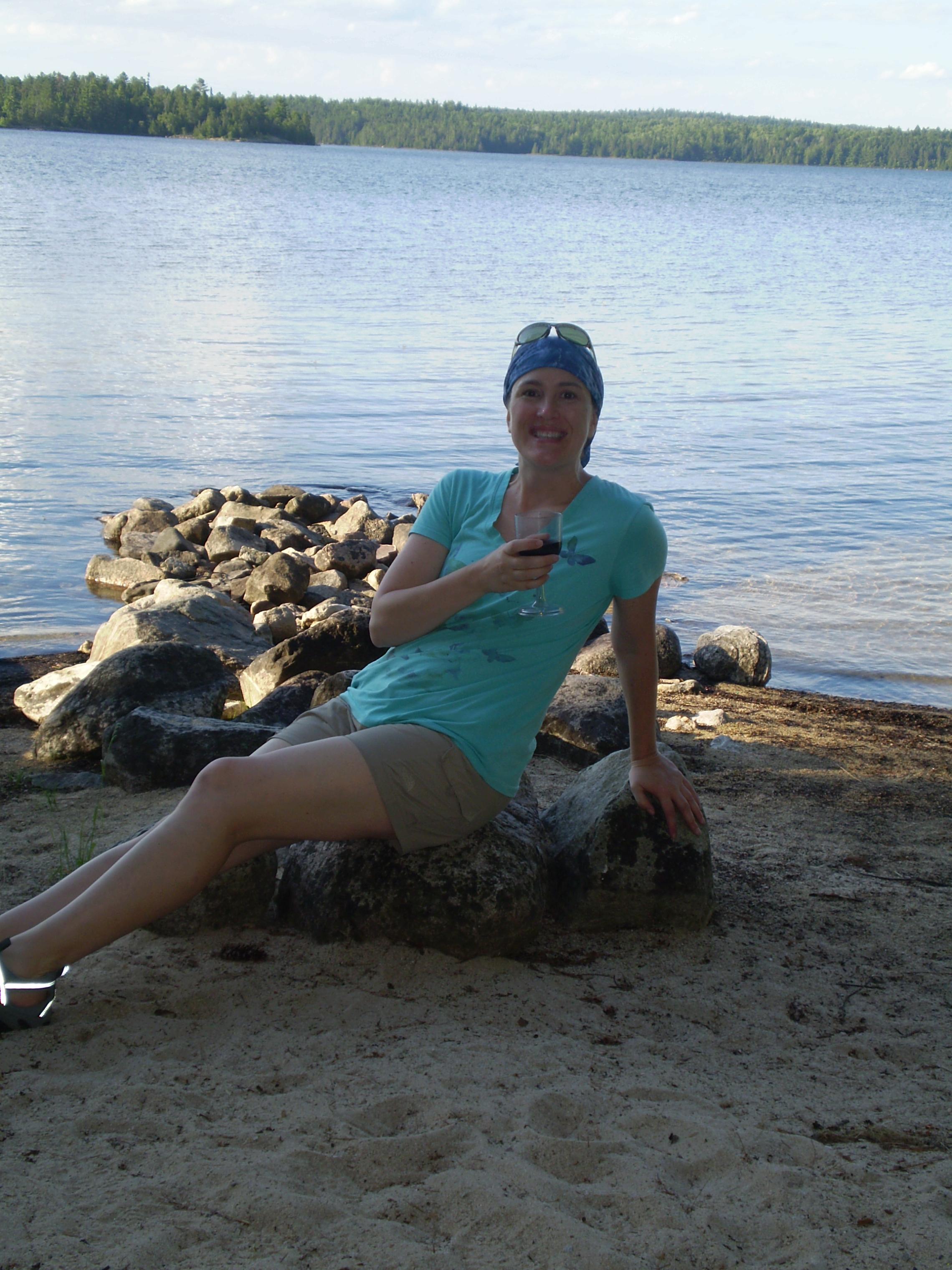 We paddle around the island and Sara catches a 21" walleye on a Berkely Fliscer shad I got for $1.99 while my $8 rapala catches a bunch of tiny smallmouth :) Hmmmmm.....