A Week With My Brother
by hopalonghowie

Trip Type: Paddling Canoe
Entry Date: 09/07/2011
Entry Point: Seagull Lake (EP 54)
Exit Point: Saganaga Lake (EP 55)
Number of Days: 7
Group Size: 2
Trip Introduction:
I don’t remember when exactly the idea for a Boundary Waters trip came into my head. Growing up in Minnesota I had often heard of people’s trips and listened with awe. I have always had an appreciation for the outdoors, the most uninterrupted quality time with my dad growing up and today has been spent in the boat, but my own experiences with the great outdoors has been limited to a week up north at a resort cabin and the occasional car camping trip. I mentioned the idea to my brother who agreed to go with me and I began researching. I read several great books though the one from which I took the most advice was “Canoe Country Camping” by Michael Furtman. I found a route that sounded like it would give us exactly what we were looking for. We would enter at Seagull Lake (EP#54) and make a loop around Thunder Point on Knife Lake and exit on big Sag. It’s roughly 45 miles but by giving ourselves 6 days I figured we’d be alright despite my lack of being in good shape. We talked about the trip a lot, we both enjoyed researching the gear we’d need and decided that we’d be best off just buying it all, knowing that we would both be hooked after our first trip. Of course my brother is tight with cash to say the least so when we discussed when we should go his answer was always about 3 years away. Then I lost my job and was unemployed, which lead to my taking a job overseas. One day on the phone with my brother he said that now that I was gone he regretted not taking the trip with me when we had the chance, by the time we got off the phone we had a date set and the serious trip planning began. Duluth packs were bought. September 6th 2011 we were heading to the BWCA. The Gear: We sent emails back and forth for the nearly 2 years leading up to the trip, mostly about what gear would be best and what things were essential and what could be left at home. We decided that our boat would be a Souris River Quetico 17 (we ended up with a 16’ because of a good deal on craigslist), traditional Duluth Packs, 3 total a #4, #3 cruiser combo, and a wanderer (which also made a great carry-on for me on my visits home). We thought about having our seamstress mother make us a CCS lean style tent but decided that we would be better off waiting on that one (don’t want to ruin our first trip with our lack of tent-building experience), but we found a good deal on a Marmot Limelight 3P. For comfort we both got a ENO hammock. Other gear included 1 Exped Synmat, 1 Big Agnes Air Core pad, 2 Lafuma down sleeping bags, Coleman Peak1 stove, Vittle vault for in the food pack, Sven Saw, Estwing Hatchet, MSR Miniworks filter and a whole bunch more small items.
Discuss Trip: View Discussion Thread (16 messages)
Day 1 of 7
Tuesday, September 06, 2011

Fast forward to the day before our trip; I had a new job so could only take off as little time from work as possible so I would have to work the night before our entry date. Unfortunately I was working evenings, but I did leave early. We didn’t get out of St. Cloud until after midnight mostly because my brother (who since he had ordered the permit listed himself as the “Trip Leader” and now was referring to himself in the third person as “Trip Leader”) decided that it would be easier to cram all of our stuff into his car than my SUV (which has a rack). When his car wouldn’t start with its 9+ year old battery, I talked him out of going to walmart to replace it and just get in my truck so we could get going. On the way up I tried to sleep without much success until after Duluth. We stopped for our last meal before the BW which at that time in the morning meant 24hr McDonald’s. I woke up and Royce said we were 40 miles up the Gunflint. No Mooses. Just deer. Everywhere. He was tired and I think nervous that he was going to cream a deer in my truck. I stayed awake the rest of the way to Seagull Outfitters to get our permit. It was chilly so we got our long johns on thinking we were going to need it. Drove to Trail’s End campground. 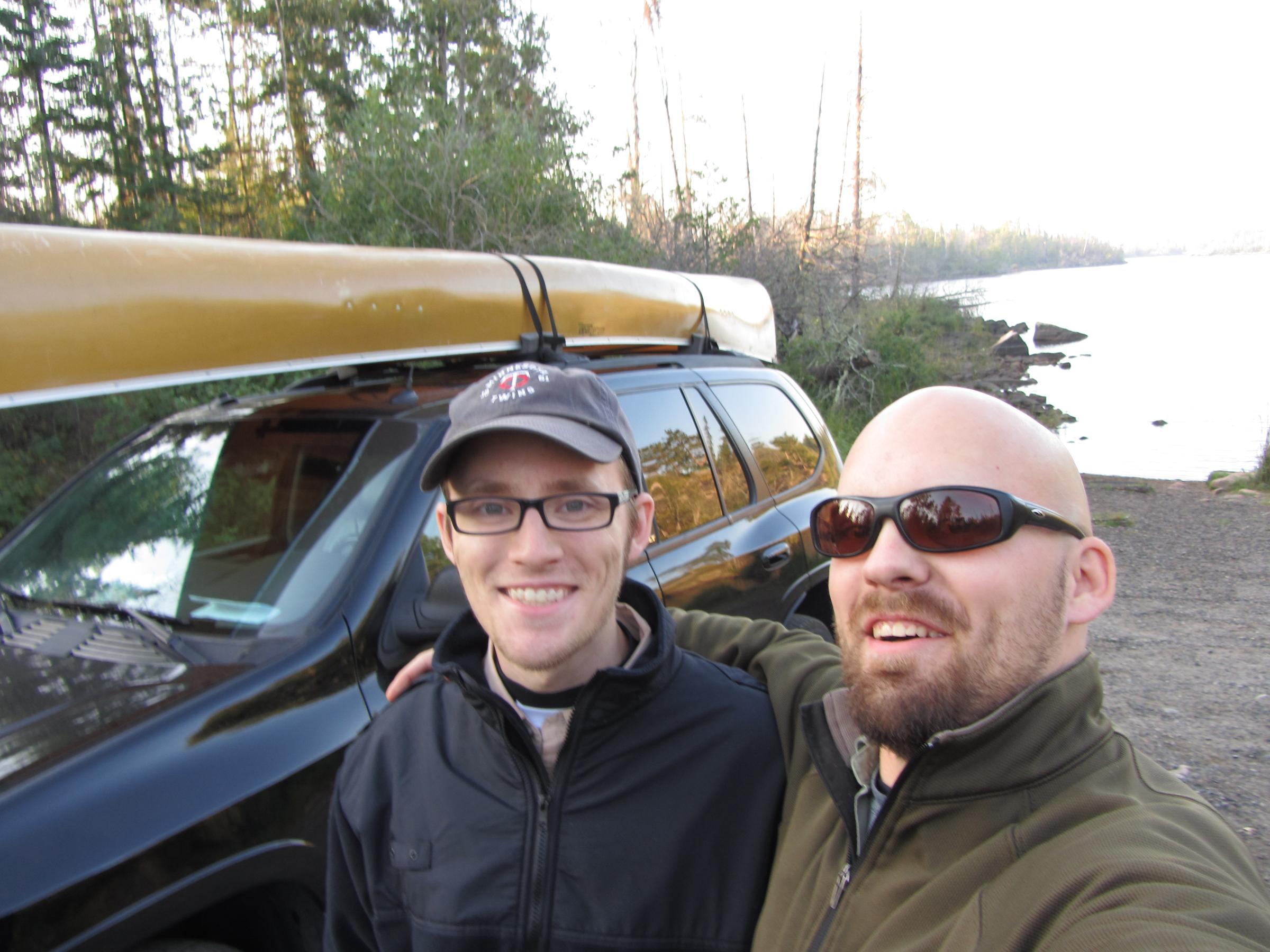