Trip Type: Paddling Canoe
Entry Date: 05/25/2012
Entry & Exit Point: Crab Lake and Cummings from Burntside Lake (EP 4)
Number of Days: 3
Group Size: 6
Trip Introduction:
This trip was initiated in spur of the moment style late this winter. A friend of mine had stumbled across a deal on outfitting in the BWCA and sent it to me to plan and complete the logistics. What started as a 2 person trip morphed into a 6 person affair. The group consisted of 4 men and 2 women, all of us fostering a competitive streak and above average fitness (collegiate and post collegiate athletes, military, etc.). Most of the group has back country and on the water experience, although generally of the Whitewater variety. Needless to say we felt up to the task of 3 days of canoeing. We would have 3.5 months to gather any necessary gear and claim time off for the trip. Our route consisted of a tow across Burntside, the smaller southern chain of lakes (Saca, Hassel, Battle, etc), back up through the Crabs, Cummings, back down, out Crab Creek, and a paddle across Burntside.
Discuss Trip: View Discussion Thread (16 messages)
Day 1 of 3
Friday, May 25, 2012

The group arrived in 2 cars at Voyageur North outfitters just past 1 AM. 15.5 hours of driving had left everyone well spent and ready for sleep. Even leaving 2 hours later than expected we made excellent time, almost too good. 4 hours of car napping awaited.

Promptly at 5 the lights flickered inside the outfitter store. The six of us, groggy yet full of anticipation, spilled out of the 2 cars and sauntered towards the gas stations/convenience store next door. I like Clif bars a lot, but this morning the chocolate chip variety hit the spot particularly well.

Partially satiated I signed our permits and release forms as the rest of the group milled about the store. We all sat down and watched the 'leave it as you found it' video, planned out our route, and stared begrudgingly at the overly large pile of packs arranged in front of us. 20 minutes later we piled into the VN suburban, boats and gear in tow, and headed for Burntside Lake.

It had been windy since we arrived in Ely. Despite our plans to the contrary, we payed for a tow across the big lake to our entry point. Our driver/tow operator split our gear and group in half and completed his task in 2 parts. Arriving at EP 4 first with the girls (Erika and Brittany) I pulled on a green Duluth Pack and awkwardly heaved one of the kevlar Minnesota II canoes on my shoulders. A mile of unknown portage awaited.

A mere two or three hundred yards in the relatively light weight of the canoe was making its presence known on my shoulders. I eased off to the side and rolled the canoe to the ground. Adjustment to the shoulder pads would be key the rest of the way. Now steadied I found my groove and ground out the rest of the portage, slogging through the low places and powering up the hills and rocks. I had made good time and was feeling good. I decided to run back to meet up with the rest of the guys (Aaron, Jon, and Kyle). I passed the girls as they crested their last hill and let them know they were almost there. Finally 2/3 of the way back to Burntside I found the guys. They were well saddled with one canoe and a handful of packs. Kyle looked like an overworked sherpa, mounted up with 2 personal packs and a large grey Duluth pack. I took 2 off his hands and started back to Crab.

10 minutes later the whole group was together on the Crab end of the long portage. Myself (Alex) and Kyle would take one vessel (from now on known as Team Water Buffalo). Aaron and John (Rhino), and Erika and Brittany (Gazelle) would take the other 2. Nearly immediately upon setting off into the windswept water it became apparent that we were dealing with a different scale than we were used to back in Ohio. Outside of Erie most of the inland lakes are man made, the largest aren't that much bigger than Crab if at all, and then they are dominated by motor boats. This was a different ball game. What looked like a short distance on our maps and in our minds was suddenly a half a mile or more.

Once our bearings and our sense of scale found us we began to make headway. After battling the wind we found our way to our first portage to Saca Lake at the southwest portion of Crab. It was immediately apparent that venturing to the smaller lakes of this entry point was taking us off the beaten path. The portage was much less traveled than the main one from Burntside. Downed trees abound. We trudged our way across to Saca, loaded back up and made the short paddle across to the Hassel Lake portage. Slightly shorter than the previous one at 80 rods things weren't quite as rugged, moss and wet places, one downed tree.

A quick jaunt across Hassel left us looking at what we were pretty sure was our portage. It was a mess relatively speaking. Rocky, downed trees, wet holes, and longer at 140 rods. By this point I was feeling just what my adrenaline fueled first portage speediness had left me; next to nothing. We were now two tripping and lining in the canoes. 140 rough rods 4 times over. The best part of this particular experience was witnessing our only evidence of moose we'd see the whole trip. Many unweathered tracks marked the trail.

Finally, we'd reached the day's destination; Battle Lake. A decent sized lake of seclusion. One well placed campsite was perched on a rocky point a short paddle from the portage. We found the latrine, set camp, took in the view and relaxed. 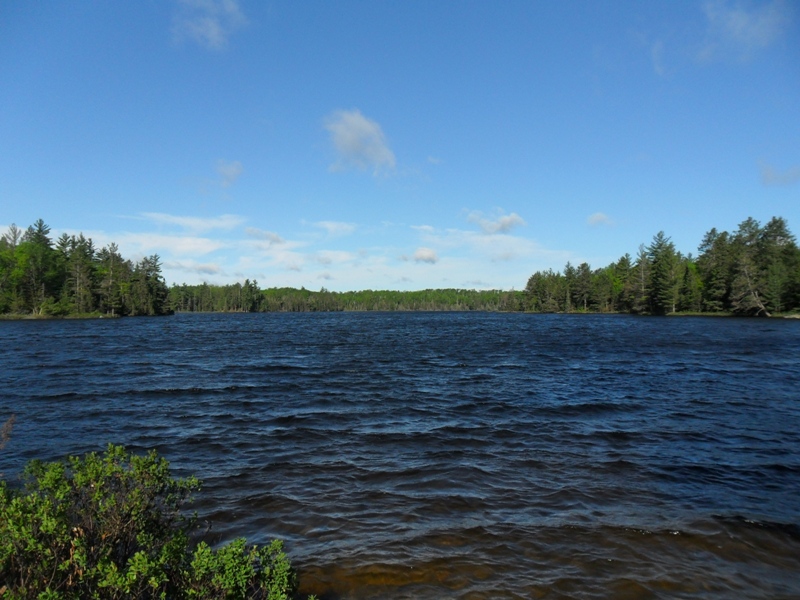 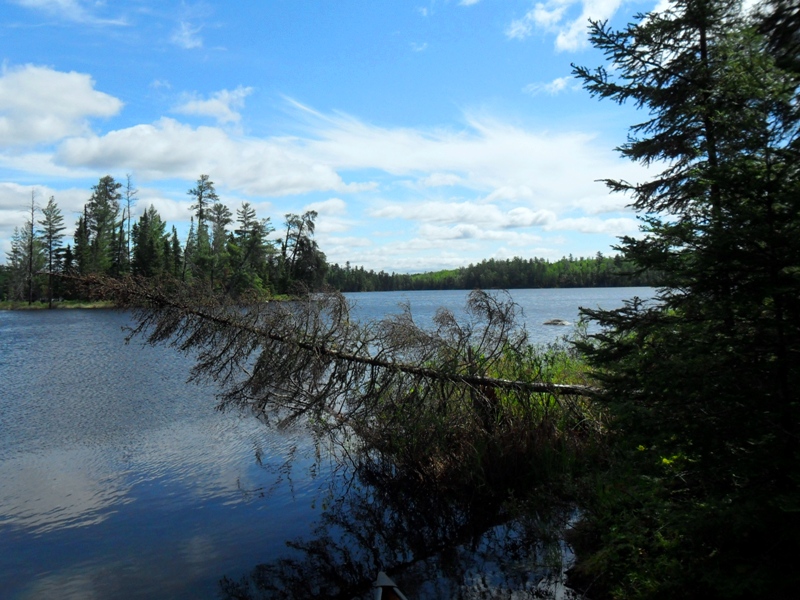 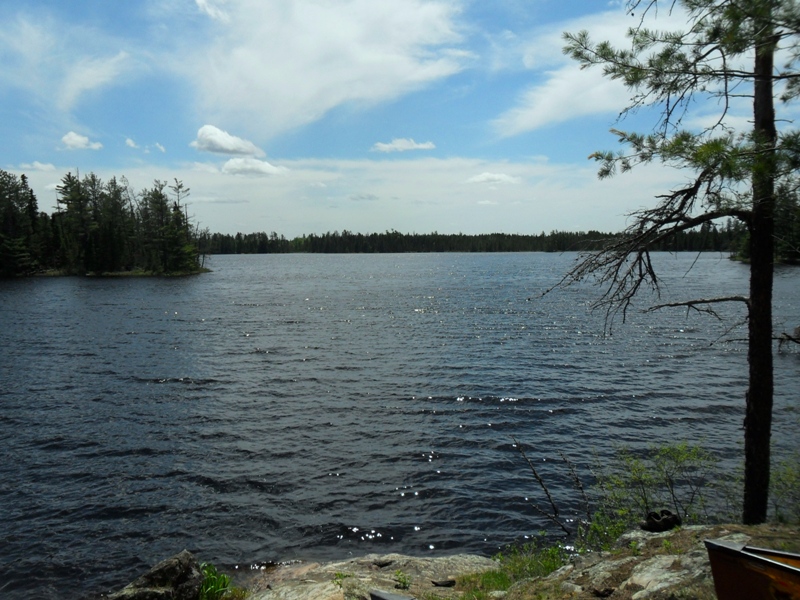 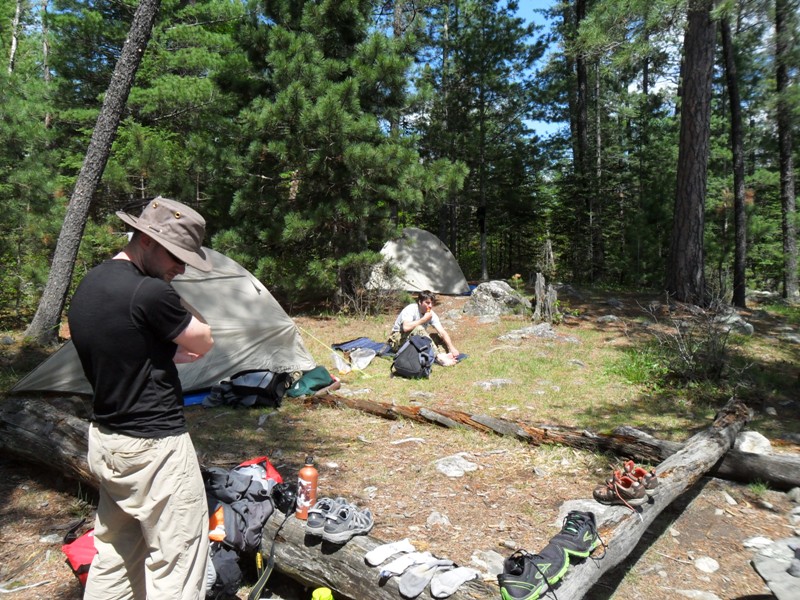