Overview: I left Morgantown, WV, Saturday, September 22nd, and returned Saturday, October 6th, traveling through Pennsylvania, Ohio, Michigan, and Wisconsin on the way to Minnesota for my 8-day, 7-night BW solo. It was a 2,550 mile round trip journey.

Route: Cross Bay Lake to Long Island Lake to Omega Lake to Horseshoe Lake to Lizz Lake to Poplar Lake. I stayed at Rockwood Outfitters the night before and they shuttled me to the entry point on Tuesday, September 25th. I exited through Lizz Lake and paddled across Poplar Lake to Rockwood Outfitters on Tuesday, October 2nd. You can follow this route on Voyageur Maps 6 and 9 at their website. 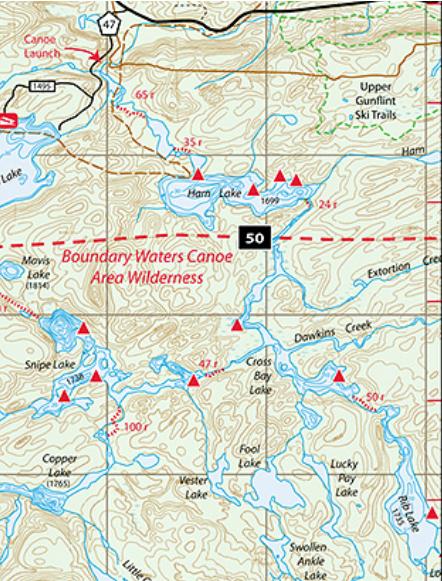 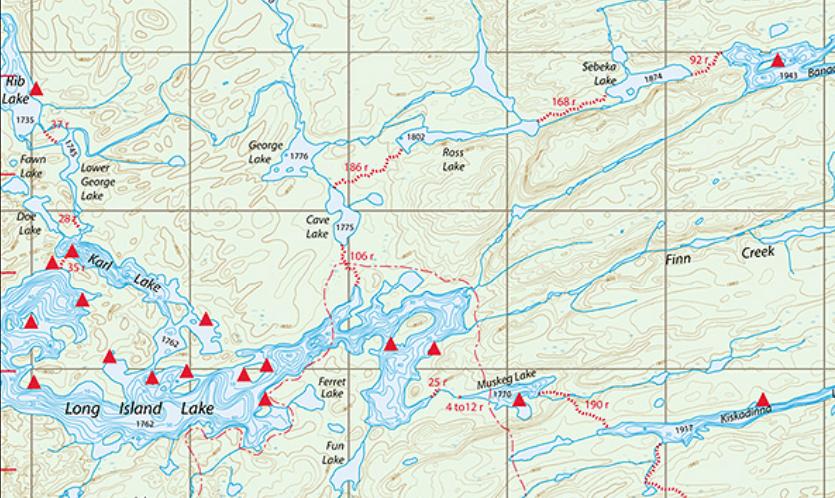 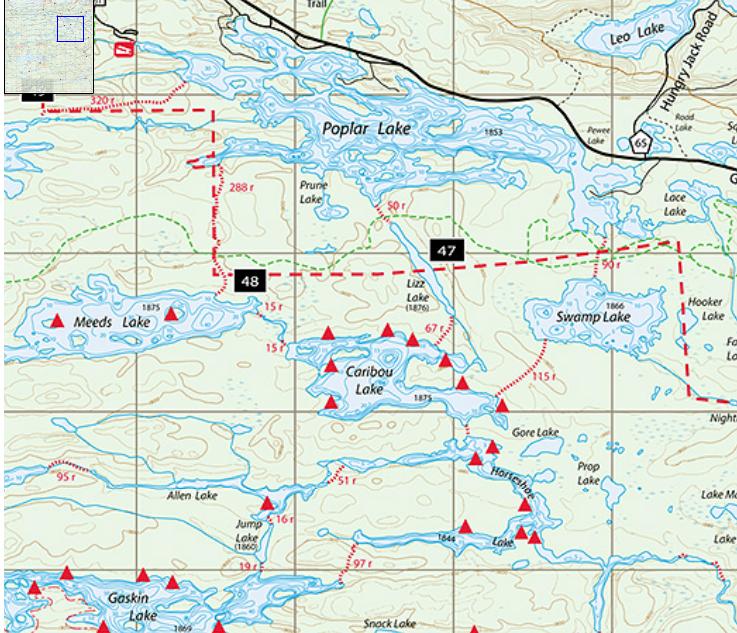 Fire Restrictions: Fires were only allowed between 7:00 PM and midnight.

New Equipment: Jetboil Sol stove: This stove is a light, compact, efficient stove for boiling water. One small canister, which stores inside the pot, lasted from Tuesday through Monday afternoon coffee – 5 breakfasts, 5 dinners, and about 20 mugs of coffee. The stove lit easily and operated without problem in temperatures down into the 20’s. The wind did not seem to have any significant effect on it, although it was not exceptionally windy for that time of year.

Wenonah Prism canoe: Generally the canoe worked well for me – about the same as most solo canoes I can rent from outfitters up there. I did not have much wind on this trip though so it’s hard to make a comparison. It was a little hard to turn and control on the windiest days, especially unloaded. Not as hard as a Souris River solo, but maybe a little more so than a Bell Magic. It was better tracking than the Bell Rockstar from last year, but not as maneuverable. Extra-long double-blade paddle: I rented this from Rockwood Outfitters and don’t know exactly how long it was, but it was longer than any I have used before. I’d guess at least 260cm, maybe 280. It was significantly longer than the one I got last year from Sawtooth Outfitters. It worked well for me. I was able to get into a nice steady rhythm and just cruise along with a low stroke. If I paddled hard with the low angle, the bow tended to move back and forth. I could remedy that with a higher stroke, but that was harder on my shoulders.

New Food: MIO (and Great Value) drink mixes, both energy and regular: This replaced Gatorade and tasted good. It packs a lot smaller, which allowed me to get everything in a BearVault, but lacks the calories of Gatorade.

Hawk Vittles: I bought several dinners from Hawk, partly to test the gluten-free products since my sister has celiac disease, partly because they seemed like they would be more compactly packaged and easier to fit in the BearVault. This was true. The meals are not vacuum-packed and the bag material is not as thick as others, does not have a gusseted bottom, or the zip-lock closure. This makes it more awkward to rehydrate and eat them out of the bag. I used a couple of spring clips to hold the top of the bag closed while it rehydrated in the cozy, which I kept upright between the seating logs, rocks, and equipment. About halfway through the trip I started using the clips to hold the bag sides to the sides of the cozy while eating them. The instructions don’t give the amount of water needed for rehydration, but just instruct you to add boiling water to one inch above the food. I like to boil just the amount of water I need, so it was a little bit of a guessing game.

I had four different dinners: Beef Stew, Salmon Stir-Fry, Bacon Baked Beans, and Shrimp Jambalaya. The ones which are not normally gluten-free were made that way by substituting quinoa, so I don’t know how that might affect the taste and texture compared to the usual. Quinoa does have the advantage of being quite high in fiber :).

The Beef Stew and Bacon Baked Beans were my favorites, the Shrimp Jambalaya was OK, and the Salmon Stir-Fry was the least liked. I wasn’t very hungry that night and maybe that affected my perception of it. Or it may be better without the quinoa substitution. I couldn’t quite eat all of it.

I will order more of these from Hawk. They were generally quite tasty, although not highly seasoned. I may consider repackaging into some zip lock bags with a gusset.

Other food notes: I also used a couple of items from Pack-It-Gourmet which I had first tried last year – their smoothies and the Jamaican Peanut Porridge. I like both of these. The smoothies just require the addition of water to the bag and a good shake. They provide 400+ calories and plenty of protein. The Jamaican Peanut Porridge provides a little over 200 calories, so you need 2 of them or one and a smoothie. I expected the Porridge to be thick like oatmeal, but it’s really more like a smoothie even after drastically reducing the amount of water. I finally just drank the last one right out of the bag like a warm smoothie.

I came out with one small packet of peanut porridge, some drink mix, and a food bar and small amount of trail mix. The food bar and trail mix was my lunch and snacks for the final day which I had not yet eaten. I had made a conscious effort to cut my food back to just what I would eat so I could fit it all in my BearVault. I managed to get the 8 days in there, but it was really crammed full. The dinners from Hawk Vittles took up less space and were easier to pack than the Mountain House and Enertia dinners. I substituted MIO for Gatorade which reduced the bulk and weight considerably, but I also lost some calories there. I divided my nuts/trail mix into daily portions and ate one each day. I did have a lot of extra room in the waist of my jeans when I got out.

Synopsis: Great trip, great weather, beautiful scenery, peak fall foliage, wildlife sightings, rugged portages, remote country, and one exhausting day. I went from mid-morning Tuesday to mid-morning Saturday without seeing anyone. The day from Long Island Lake to Omega Lake through Muskeg Lake and Kiskadinna Lake was a difficult day. Omega Lake is a beautiful Lake – my new favorite Boundary Waters lake. Horseshoe Lake is also a beautiful lake – a close second to Omega Lake. Many of the lakes were long, narrow, river-like lakes, which I really liked. There was a lot of beautiful fall color - the golden leaves of birch and aspen, and golden tamaracks.

I left Morgantown, WV, shortly after 7:00 AM and arrived in Gaylord, MI, about 6 PM. It rained off and on today, but nothing too bad. The fall colors were starting to show as I traveled north.

I left Gaylord before daylight and drove north across the Mackinac Bridge into the Upper Peninsula, west along Lake Michigan, up past Seney National Wildlife Refuge, west along Lake Superior, across northern WI to Superior, and on into Duluth. There was some good fall color, but it was a cold, windy, rainy drive across the U.P. of MI and WI, with temperatures varying between 38 and 46 degrees. I was glad that I wasn’t in the BW today and that the forecast for my trip dates was much better weather.

I had arranged to meet GeorgeLesley for lunch in Grand Marais around noon, so I had plenty of time to take a little side trip. It was a nice morning as I drove up The North Shore. I took Route 1 out of Illgen City to Finland. A road there took me out by the back side of George Crosby Manitou State Park. Another right turn brought me back to The North Shore. I called George when I got to Grand Marais and in 15 minutes he met me at Blue Water Café to get acquainted over lunch.

A couple of hours later I was on my way out the Gunflint Trail to Rockwood Outfitters. I crossed the Brule River and remembered that sunnybear was planning to exit that way from Horseshoe Lake today. I wondered if he had made it out that way and how it went for him since I had not heard good things about coming out the Brule River.

At Rockwood I arranged for tomorrow morning’s shuttle to EP #50, got my bunkhouse assignment, and headed up the hill for some last-minute gear organizing and packing before heading off to Trail Center for dinner. I was unloading gear from the car when a voice asked, “Would you be Steve”? I was pleasantly surprised to meet sunnybear. Earlier in the trip planning forum, we had discovered that he’d be coming out from his trip the day I was arriving at Rockwood. He had said he might stop by Rockwood in the afternoon, but I really didn’t expect that to happen so I was quite surprised. We had a very nice, but way too short meeting as he still had miles to travel. It sounds like he had quite an adventure and I’m looking forward to his trip report detailing it all. Shortly after that, I was off to Trail Center for dinner and then back to the bunkhouse for final preparations.