Trip Type: Paddling Canoe
Entry Date: 06/13/2012
Entry & Exit Point: Little Indian Sioux River (north) (EP 14)
Number of Days: 5
Group Size: 4
Trip Introduction:
This trip started in December of 2011 with planning. My son Rob and I share rabid affection for the outdoors for almost any purpose but bow hunting and fishing are tops on the list. The tippy top of the outdoors food chain for us are our annual trips to the BW. Like many of you, I make them an all year event by planning, acquiring supplies, testing recipes, etc. By preparing bit by bit through the year I can be ready in June without stress or panic. I do not like last minute decisions or unplanned trips. The plan this year is to enter at EP14 spend one night in Snow Bay, Two nights on Takcumich, scoot around the top of Lac La Croix to Pocket Creek to Finger Lake for two nights then back to EP14 through Little Loon. Rob and I like to take a couple of newbies every year and this year we would be accompanied by Rob's friend Joe and my old high school buddy Alan. Both love to fish and are can do guys. It was a good crew but the weather would be rough.
Discuss Trip: View Discussion Thread (8 messages)
Day 1 of 5
Wednesday, June 13, 2012

Our first morning was a beauty. Clear skies and still. We had bunked at VNO upstairs. Nice rooms with fridge and eating area. I awoke first as usual before 4am. By 4:45 everybody had showered and we were ready to go because we had subs left from night and with that we had coffee from next door. We waited for the guys from VNO to open up so we could get our leeches and hand over our wallets for safekeeping. Next time I will get the leeches the night before and keep them in the fridge so we can just go. As it turned out there was a fully outfitted group going out at the same time and we were delayed even further because of that convergence.

Still, it was just barely light when we set out for EP 14 and we arrived while the day was still being born. We were halfway through the process of offloading our gear when the group from VNO showed up. That was a surprise because I had not known we were going out the same EP. They were very good about letting us get our stuff unloaded and down to the river without getting tangled. Our target for the day was Snow Bay with a plan to move on the next to Takucmich. That was not going to happen.

By 12:00 we were at the Beatty Portage which was an interesting place because it is a monument to the ingenuity and determination of man to make a nickle by filling a need. We had some trouble finding it because I did not trust my map and because it is tucked in around a point at the end of the bay. While we were having lunch a USFS boat came through so we watched the rail system work while we ate lunch. That boat is one impressive hunk of aluminum for sure. I was also interested to note that the USFS seems to prefer the SR17. Hmmm. After checking out the nearby pictographs the paddle to Snow Bay went pretty quickly due to a strong tail wind. Once at the start of the Bay we took a break at the first campsite on the point. While there a barge went past carrying a truck. That was the second hint that we were still in a pretty well traveled area with the first being the portage itself. We considered moving on past the bay but decided we were ready to stop. We were the only campers in the bay itself. After hearing of the “table” site on the island I wanted to see it and we all decided it would make a nice place to camp. Dinner was steak, potatoes, coleslaw, and Cache Lake lemon pudding. All very good. Once we cleaned up after dinner we fished until dark and caught a mishmash of mediocre fish and then we went to bed very tired. 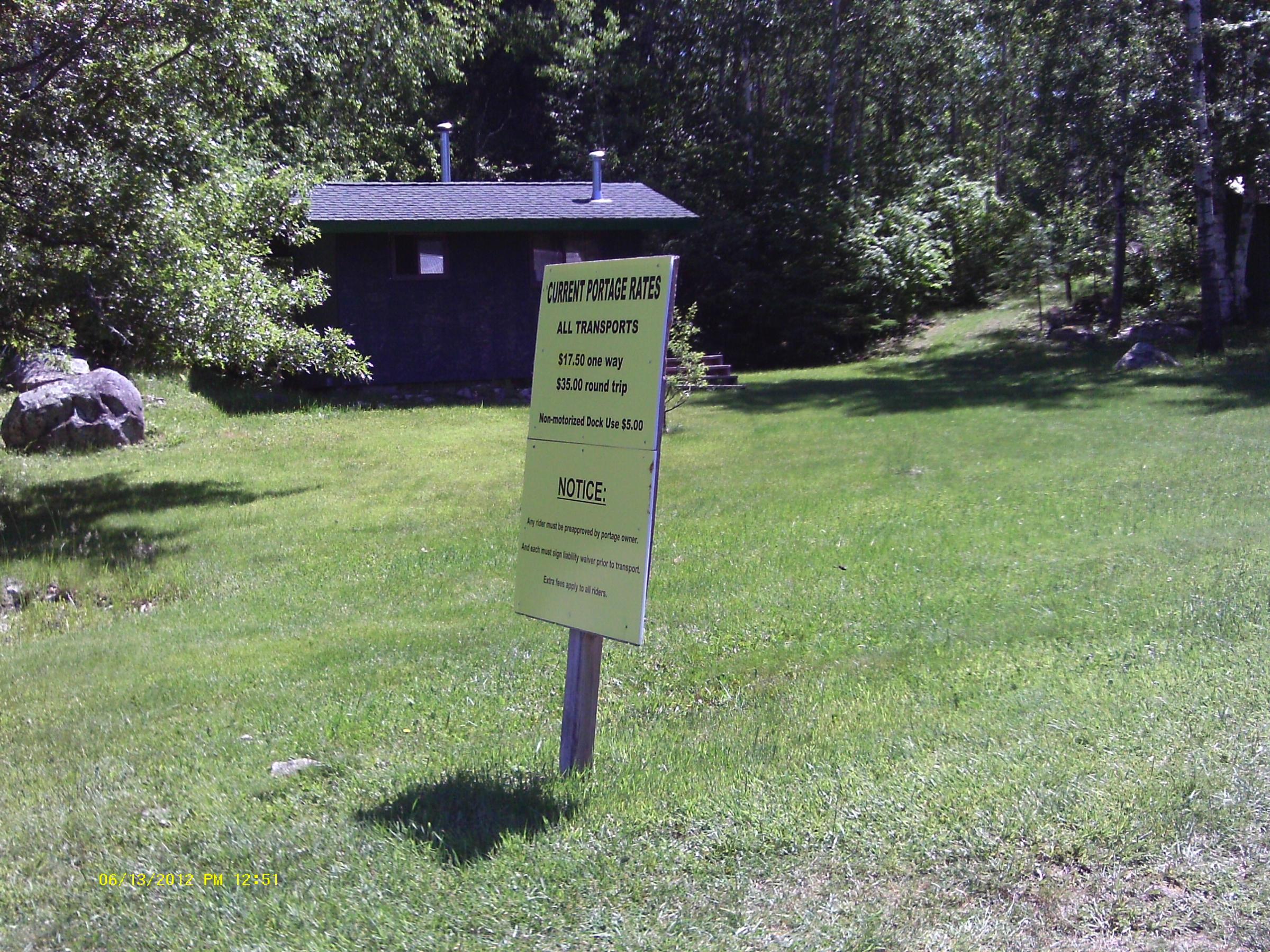 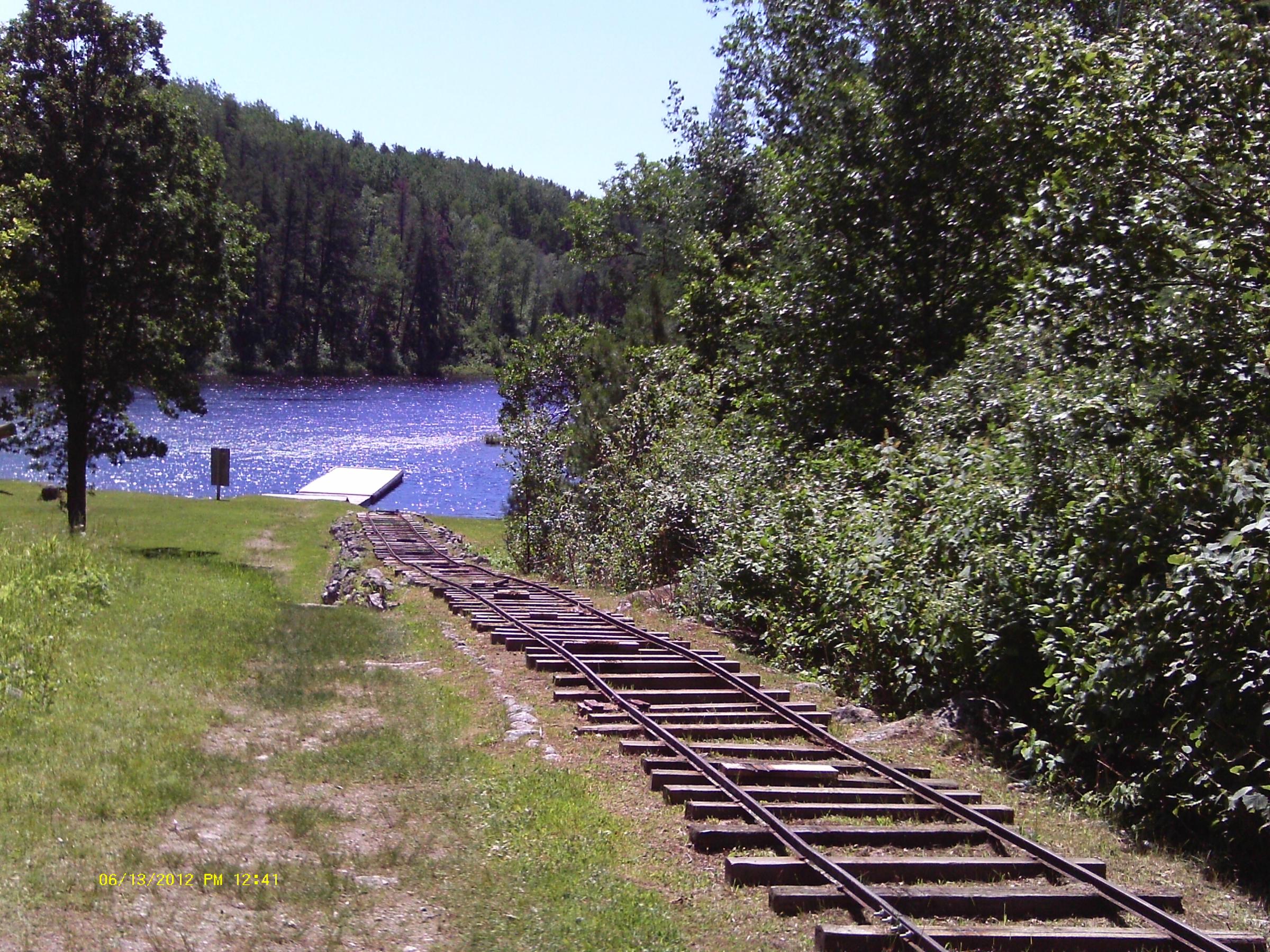 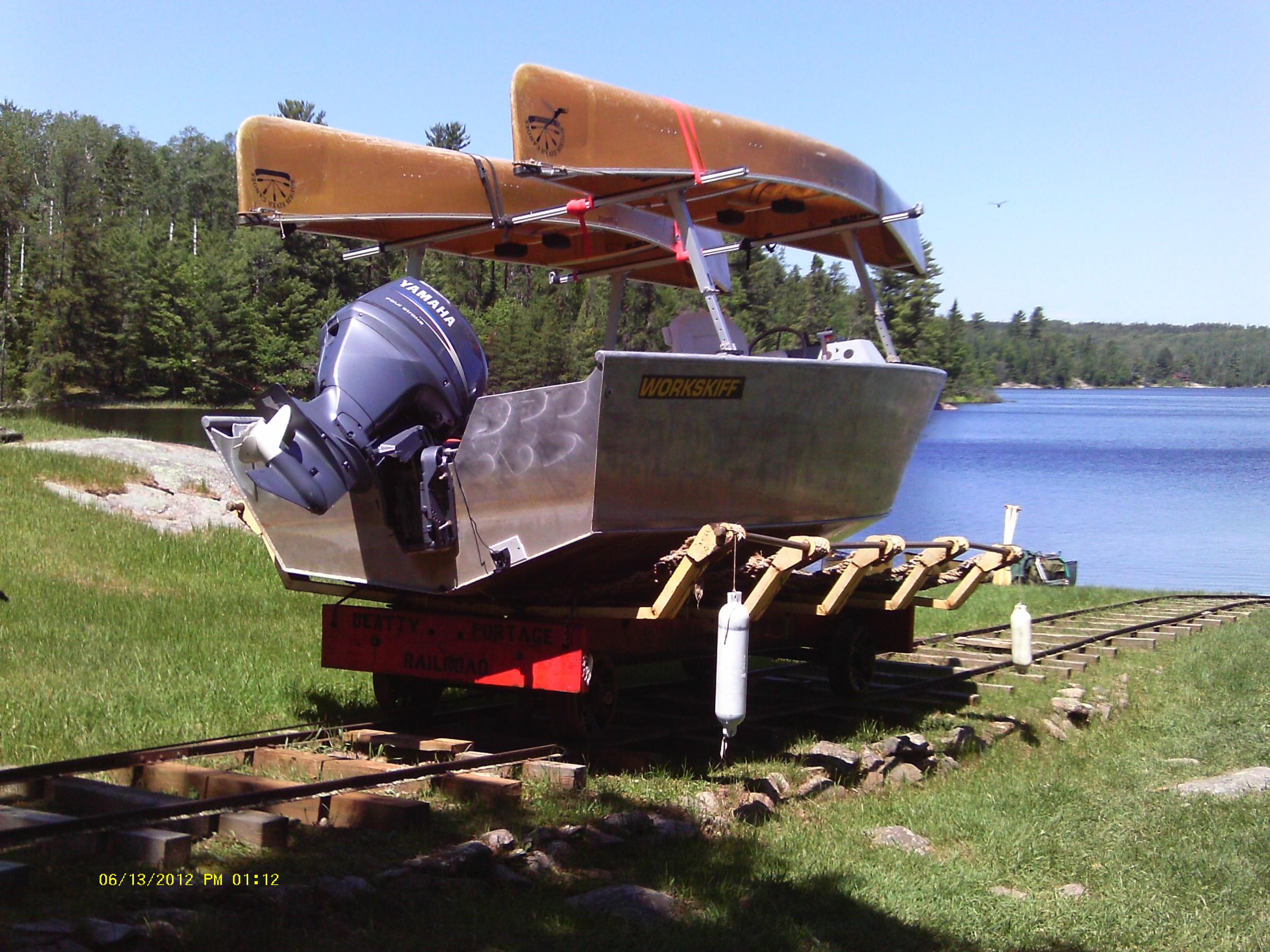 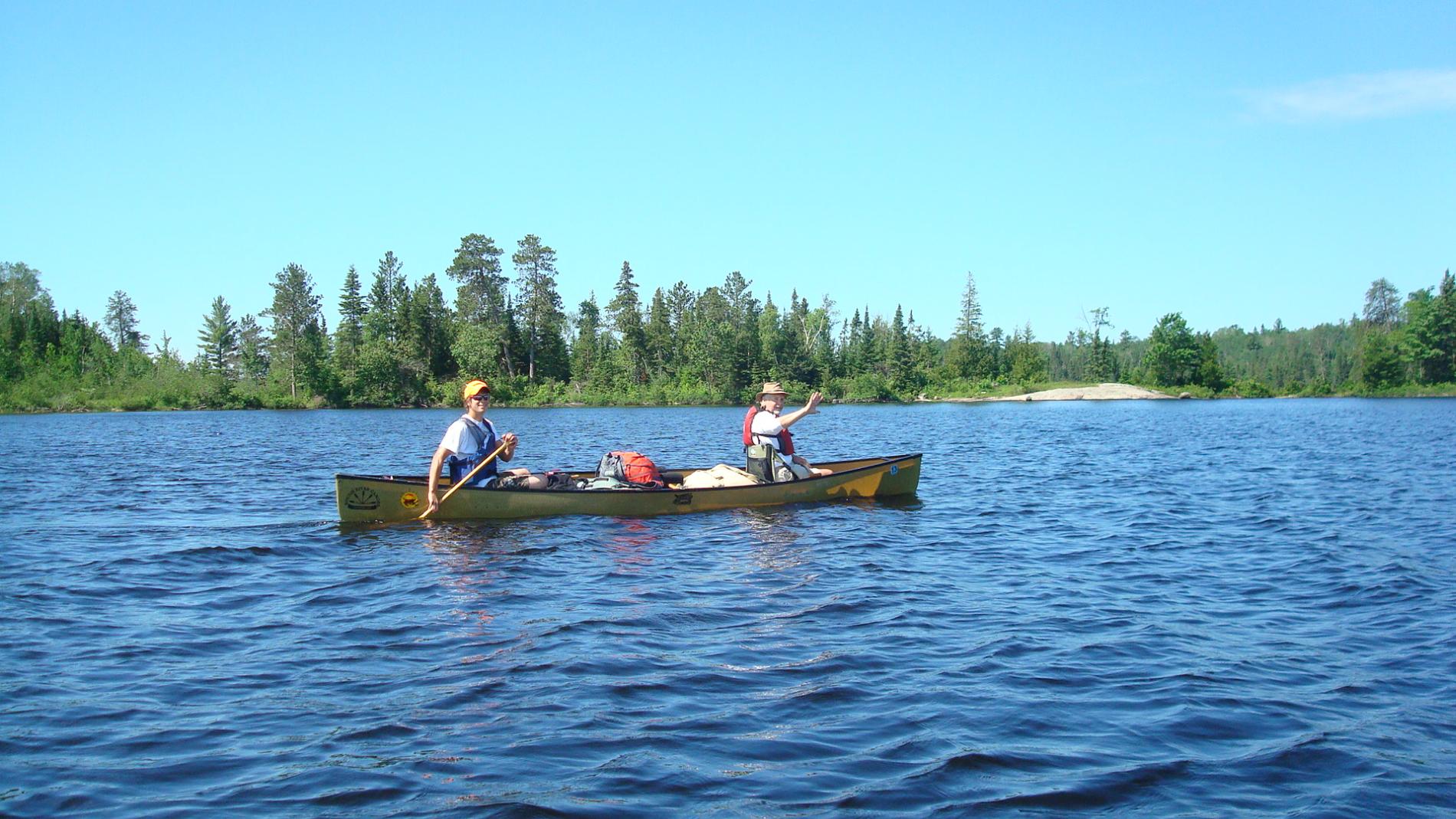 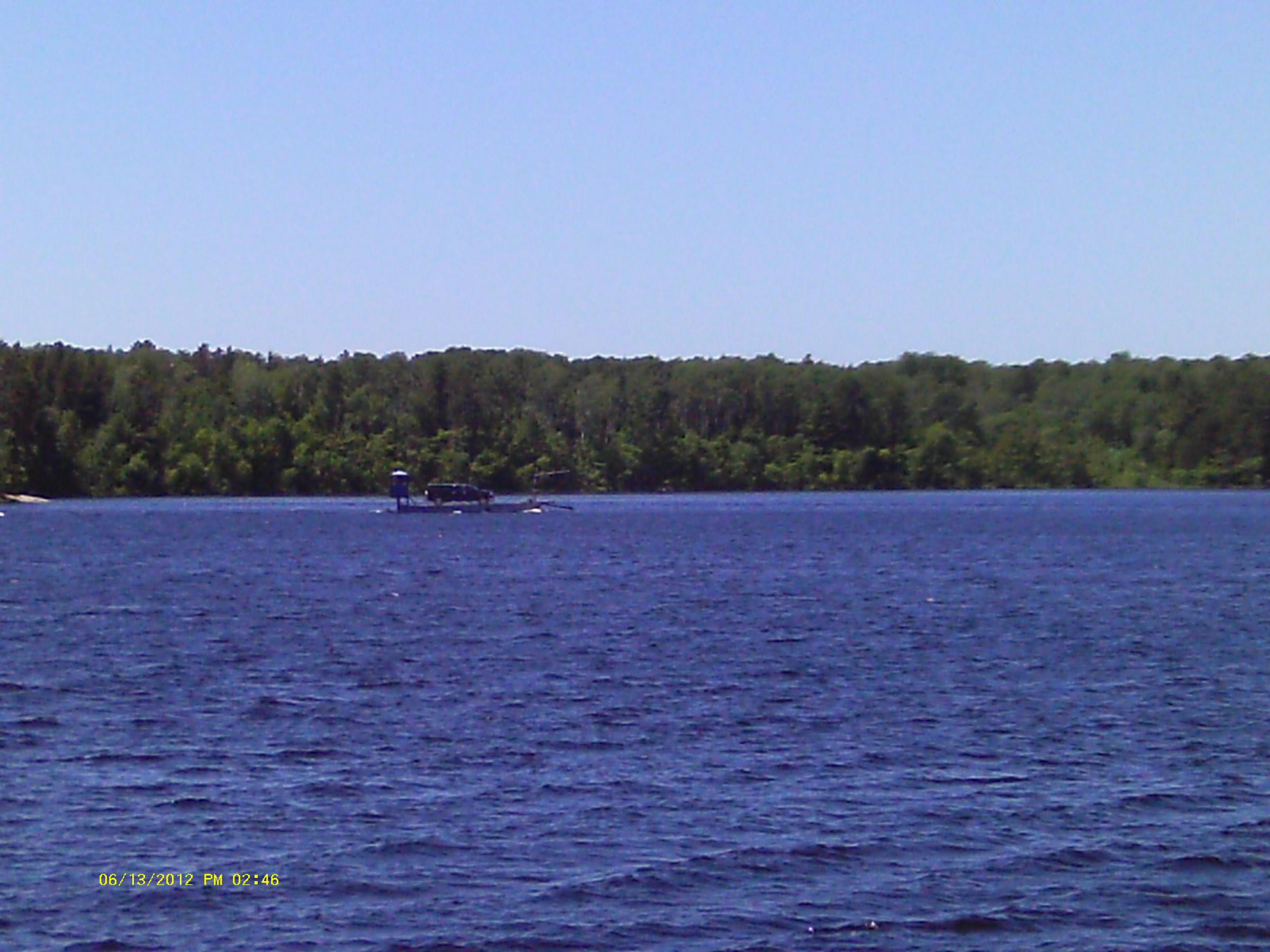