I have been drawn to do a winter camping trip for a few years now. Our family has done several summer BWCA trips and plan on doing many more. Winter camping interested me since it would be an entirely different experience and I was excited to tackle the new adventure. So upon reading and watching GreatBigCubsFan’s report on his trip to Wind Lake I was hooked. Since we have a cabin on Moose Lake already Wind Lake was on my radar before reading and watching his trip report. My decision was made.

To get ready I needed to do some homework. No winter tent…..Solved by renting a 3 person tent from Mike Keller in Ely. Mike is an experienced winter camper and along with his wife gave me some good advice. They also let me use a sled (Mike Keller 218-235-7190)

No winter sleeping bags….Solved by Piragis in Ely. Michelle was very helpful and supplied me with North Face Inferno Dark Star -40 sleeping bags and pads ($20/bag per night) I would grade these bags an A as they worked great and kept us plenty warm.

Bought a new Gransfor axe from Midwest Mountaineering (around $120) and saw (Irwin course cut $20 at Ace hardware) I grade both an A as well. I did my homework by reading many BWCA forms and took other members advice on these purchases.

I had built two sleds from Otter ice fishing sleds I bought at Fleet Farm. I attached two plastic electrical conduit to backpack belts. They worked well for lighter loads and going downhill but seemed to plow more a lot more snow then the sled I rented from Mike Keller. The kids and wife took turns pulling them with lighter loads and seemed to do fine.

I am sure I bought a few more items I can’t remember, but to me some of the fun is having an excuse to add to our camping stockpile.

So I announced to my wife and twin daughters my intentions of going winter camping for a few days. All I got was disbelief that they were not on the guest list. I had thought this would be an unwinding experience from my daily job as well as a new adventure I wanted to figure out before subjecting them to whatever mistakes I would likely make on my first trip. After some tough negotiations I felt compelled (overpowered by three females) to split the trip. I would venture in by myself and get set up and meet the rest of the expedition team the next day at the half way point on Moose Lake.

So early the first morning I headed out over Moose Lake pulling the borrowed sled. The Lake had a good amount of very fluffy powder, roughly 10 inches. The sled and snow shoes sunk into the snow a good 8 inches. The going was very rough and I actually was questioning if I could do nearly 4 miles at this effort. Half way through Moose Lake I found a path where someone else had pulled a sled and the snow was packed solid. I felt like the sled suddenly had wheels.

The portage from Moose to Wind isn’t and easy portage in the summer. In the winter pulling a sled in snow shoes is a very challenging experience.

I set up camp on an island on Wind Lake. Luckily somebody had been to the site recently and left me a bit of wood and an igloo full of pine boughs. I understand you’re not supposed to put pine boughs down in the BWCA but I figured they are dead now and therefore can use them for my tent rather than the plastic floor that came with it. Loved the pine bow smell and they let the snow from your boots fall through to the ground. I had left the cabin around 8:30 am and arrived around noon to the campsite. After getting the Snowtrekker set up I began looking for more wood.

Next was drilling a hole in the ice for some tip up fishing and another hole for drinking water. I used an 8” niles auger since the handle folds up and can be backed on the sled. The Niles also cuts through the ice much better than other models I have used. I caught one nice pike and called it a day. The weather really cooperated and the day time temp was in the mid 20’s. The silence and views were very calming and needed. That evening I made steak and potatoes on the Snowtrekkers stove and read a book.

I slept well, although you need to feed the stove about every 20-30 minutes. I used dead smaller trees and a birch that had been cut down by a beaver along shore some time ago. The birch wasn’t completely dry and even when split didn’t burn very well. The temp that night dropped to -21 degrees. The North Face inferno dark star kept me plenty warm sleeping only on a foam pad and pine boughs. I had breakfast and was going to head back to the portage on the Moose Lake side to meet my wife and daughters when a very curious river otter began his trip straight to the island and to my camp. I waited until he was close and made some noise to get him away from the camp. Last thing I wanted was to come back to find him into everything.

Met the girls at the portage and I was somewhat surprised they seemed in good spirits despite the hard work pulling the two sleds with their gear the 1.5 miles to the portage. To be fair my wife is an experienced camper and isn’t afraid of hard work. Her helpers, my twin 12 year old girls are year around gymnasts who are in much better shape than their parents. They too are very experienced BWCA campers and hunger for adventure and a good challenge.

With my newly assembled team we headed back to the camp site on Wind Lake. It was nice having help finding, splitting wood and sharing the beauty God has made for us to enjoy. We found a nice sledding area. The girls took the sleds they pulled and had a ball sliding and crashing down the hill. We all slept good with my wife attending the fire all night since our cocker spaniels also made the trip with the girls and didn’t have sleeping bags. We were CRAMMED into the tent but this probably made it a bit warmer. The second night the temp made its way down to -15 degrees. The good wife made a great breakfast and after a cup of coffee we relaxed and began the tear down of the camp. We trekked back and made it back to our cabin around 2pm.

All had a great time. Moose Lake, Wind Lake 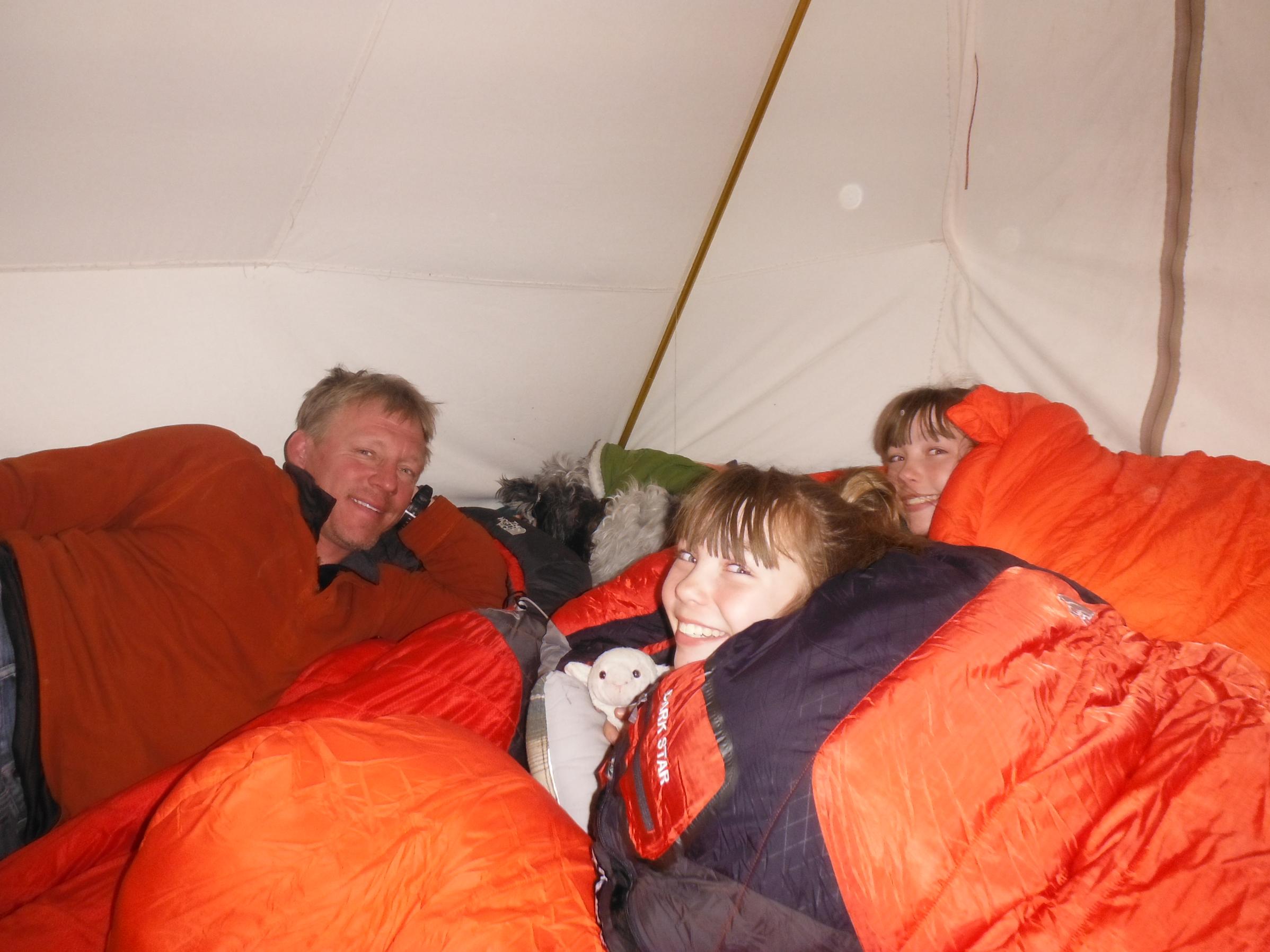 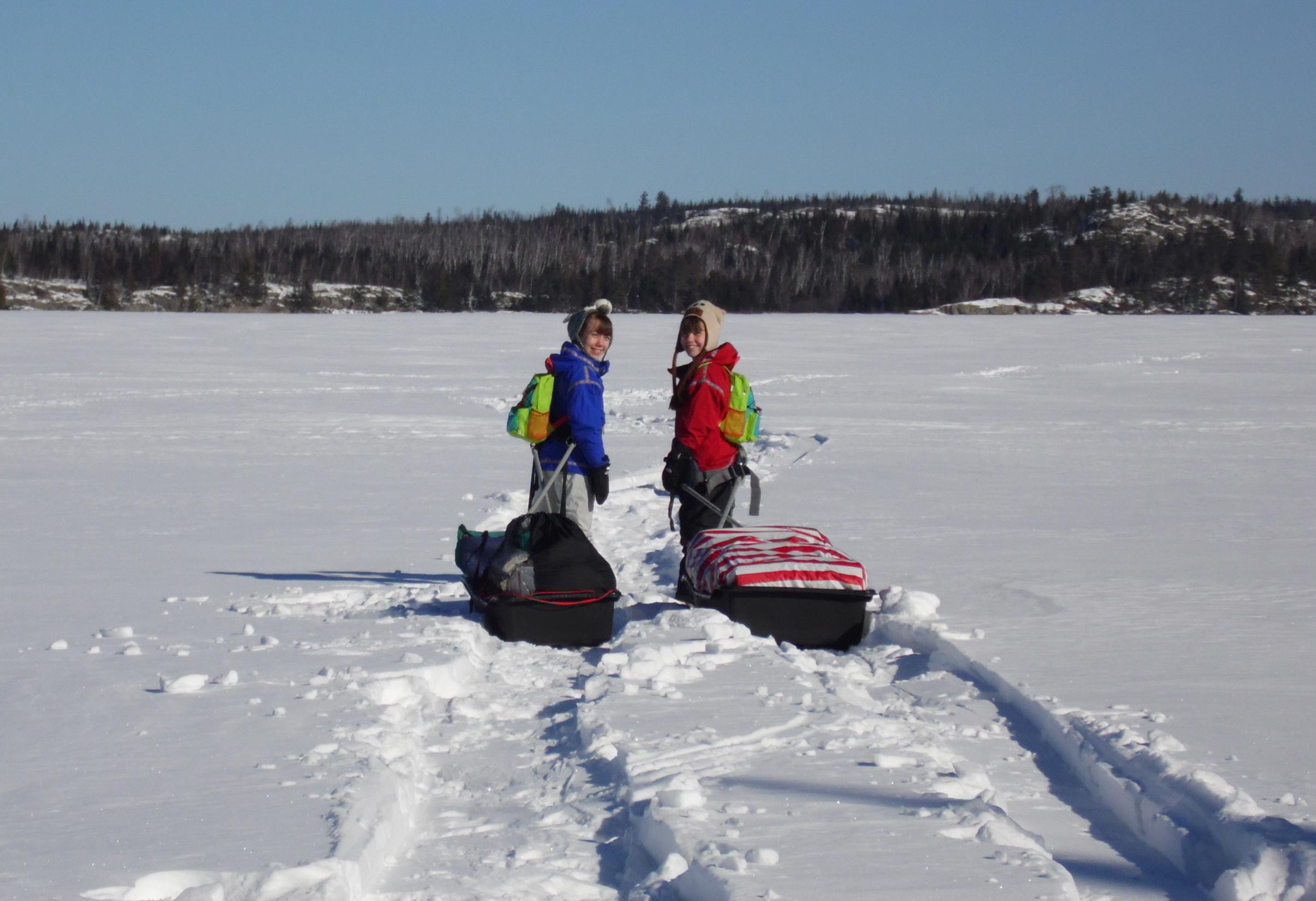 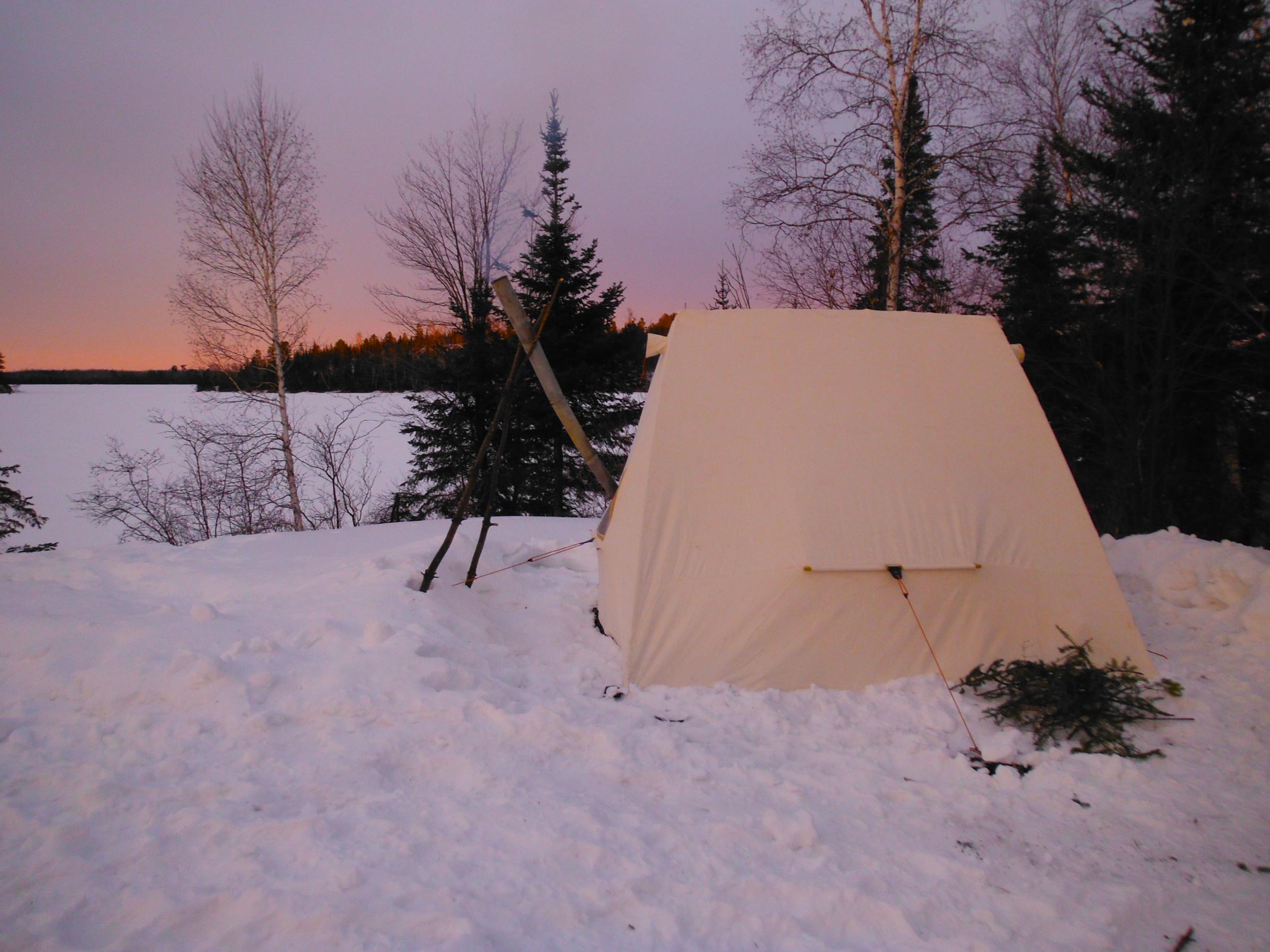 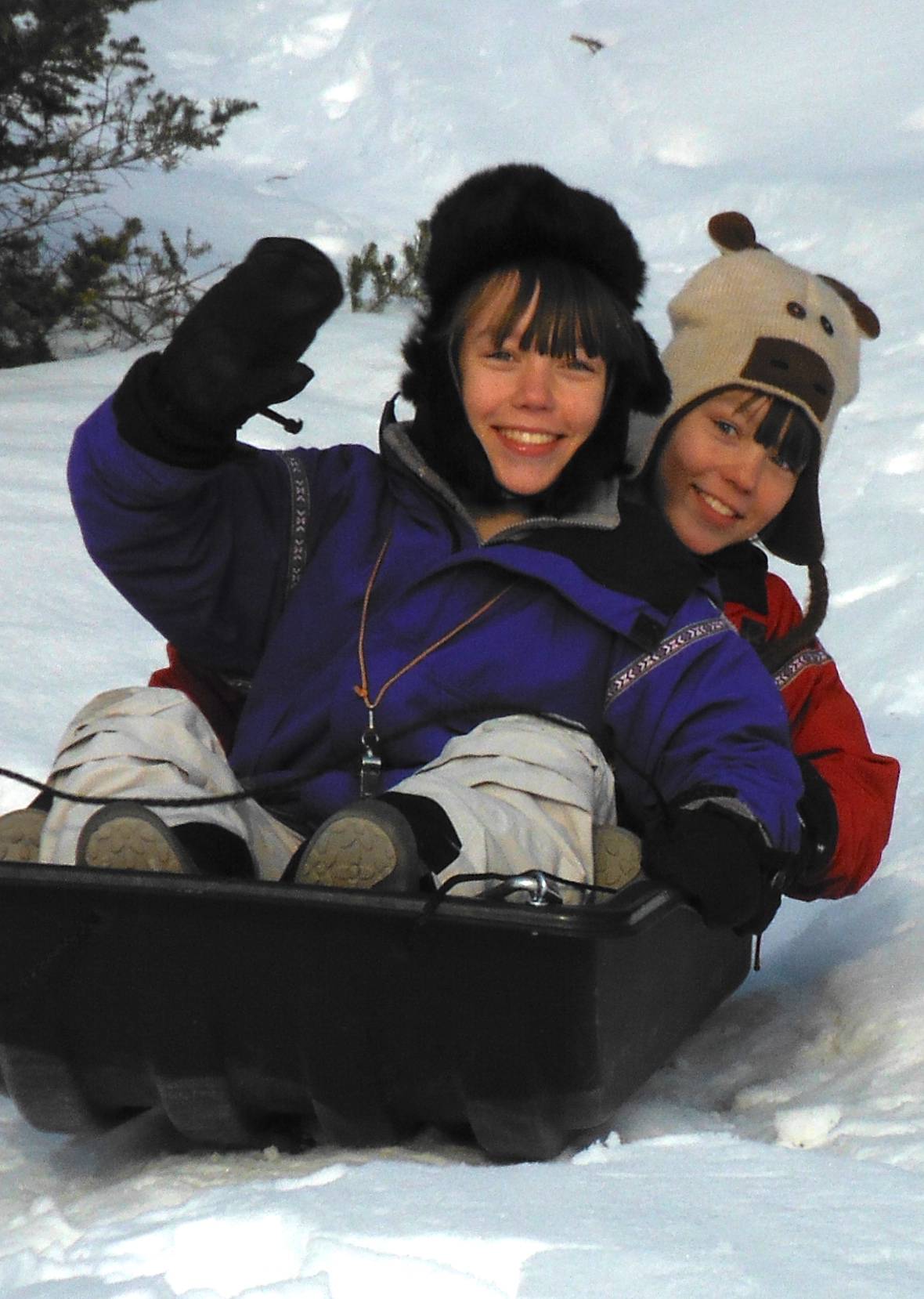 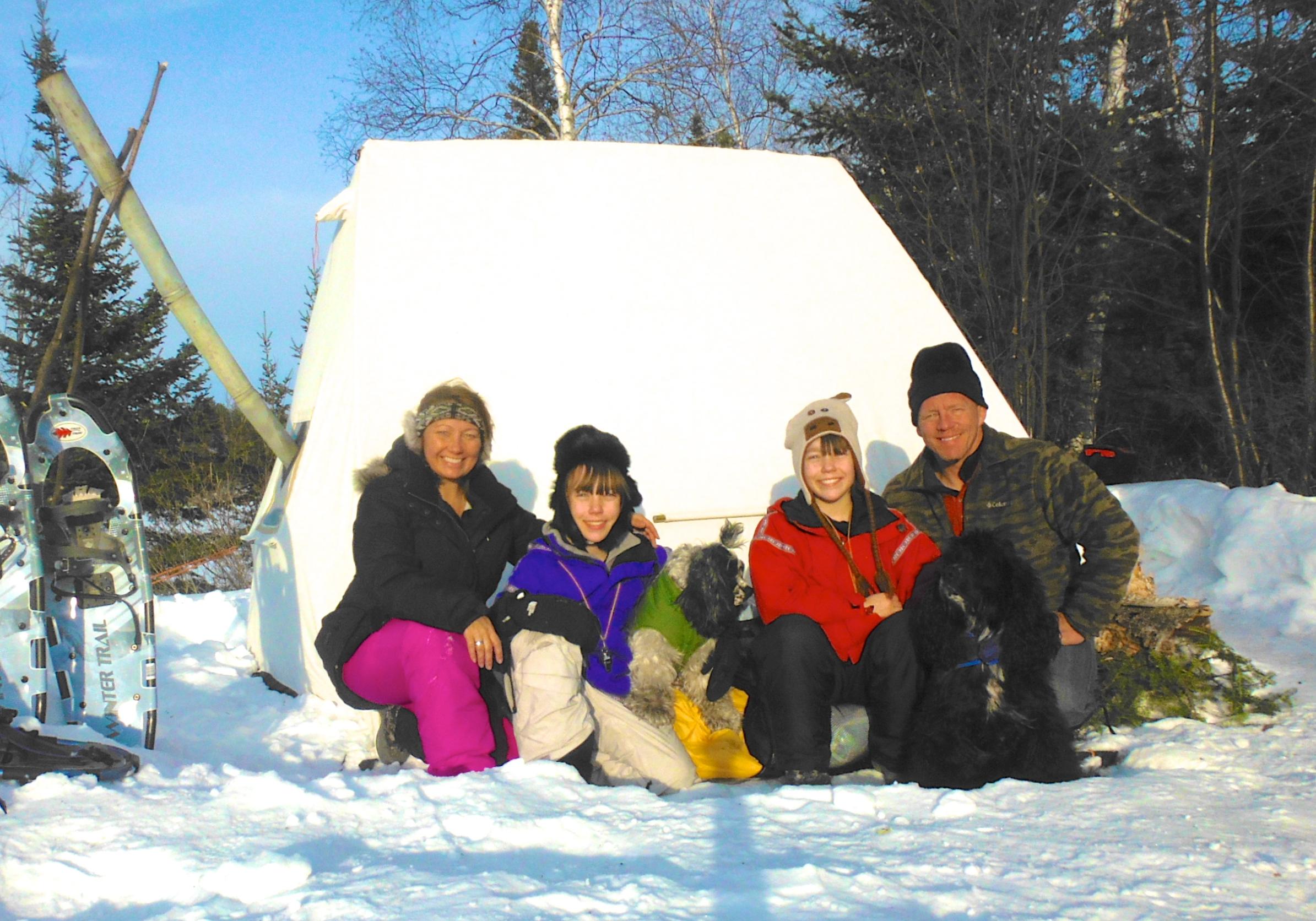 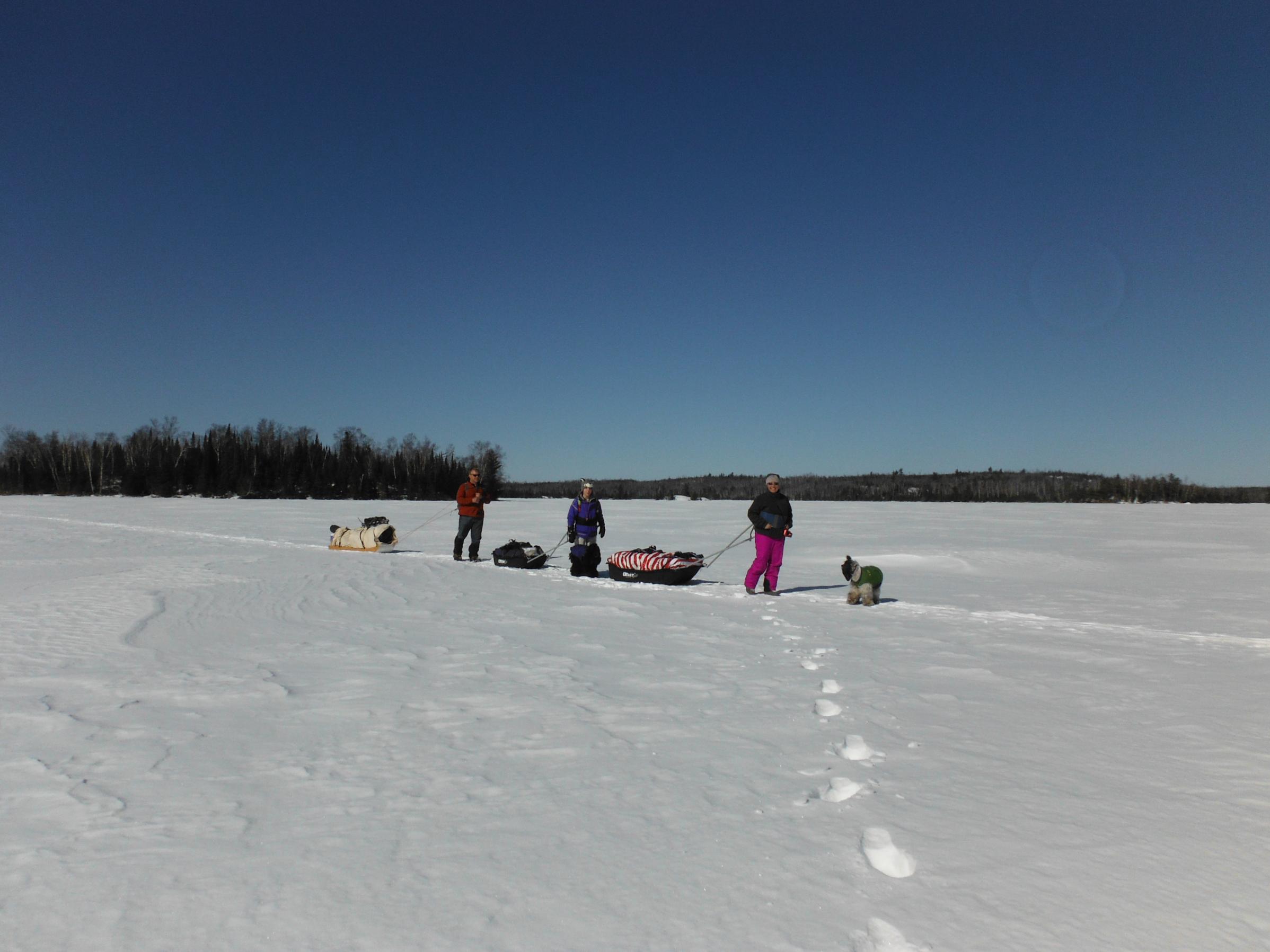 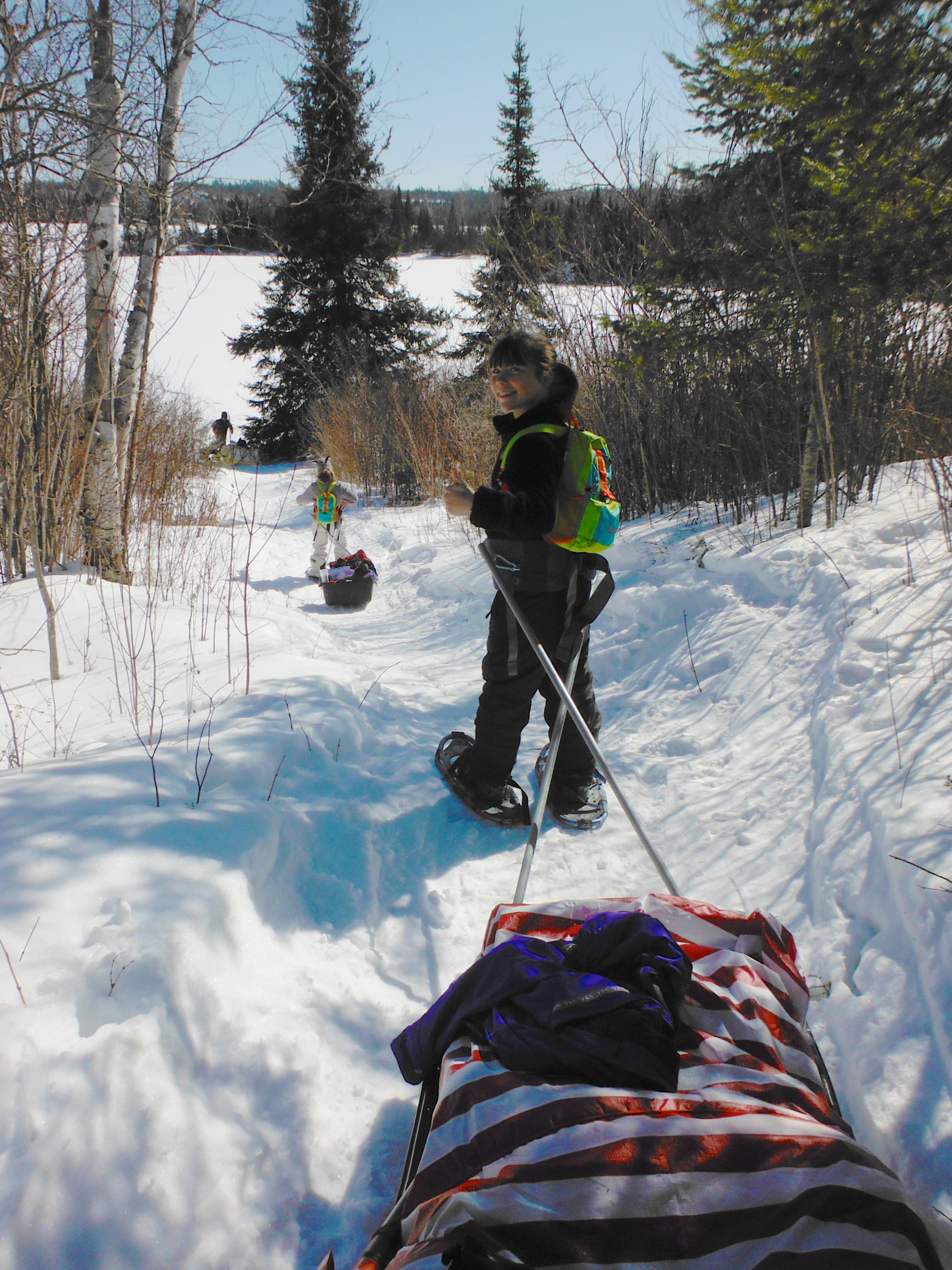 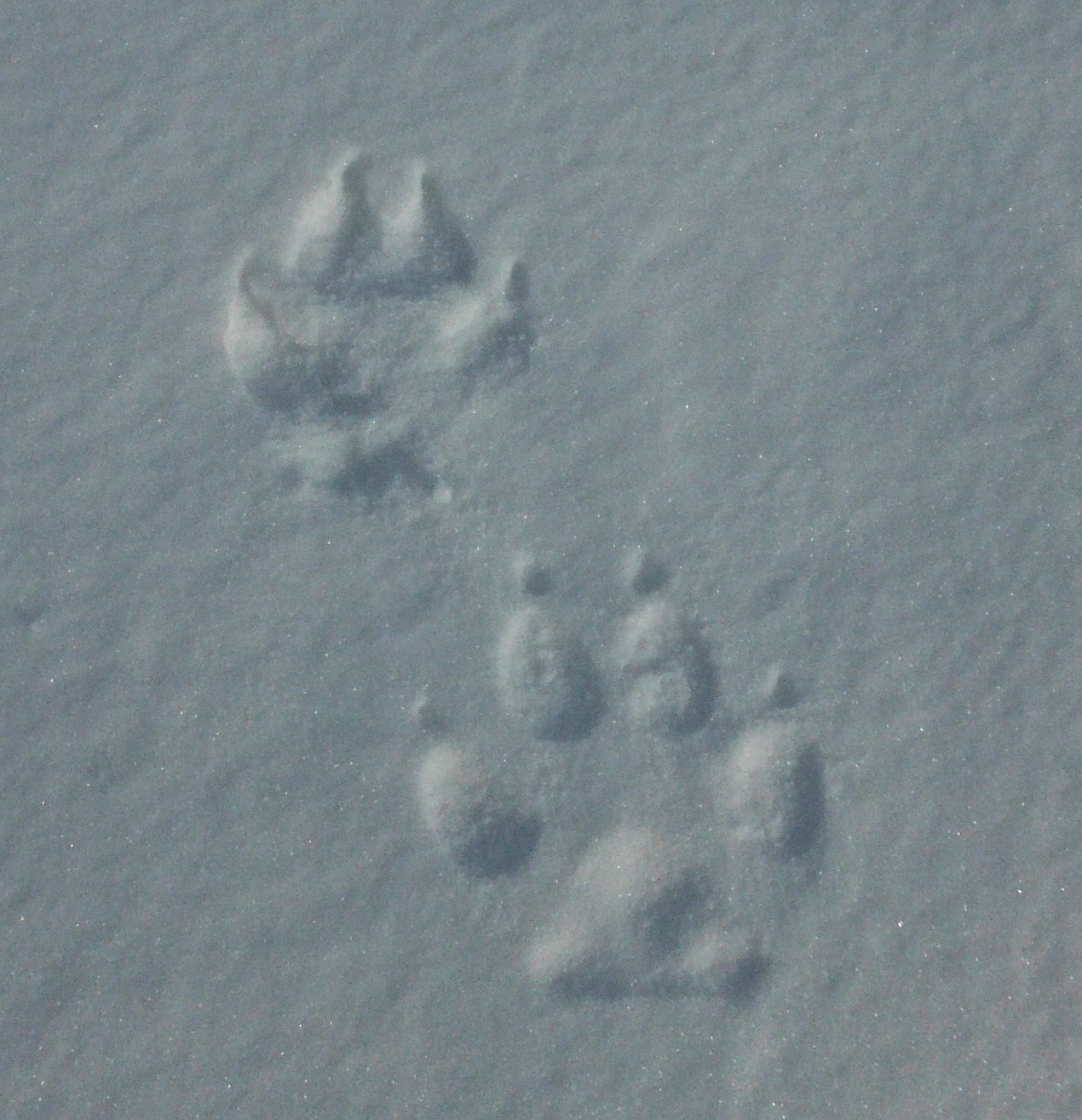 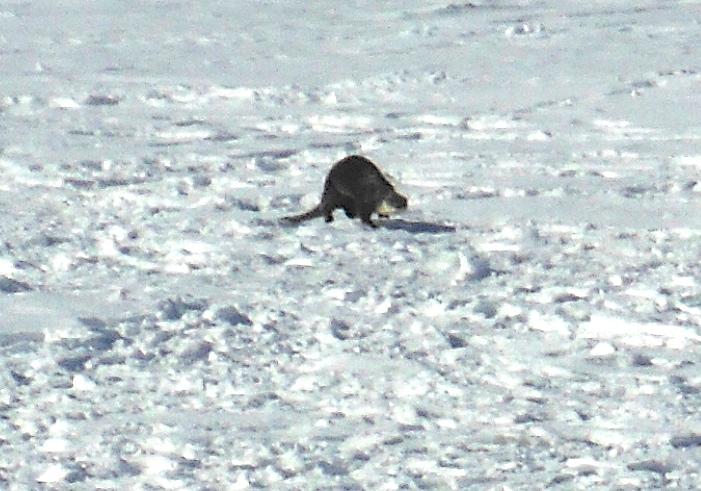 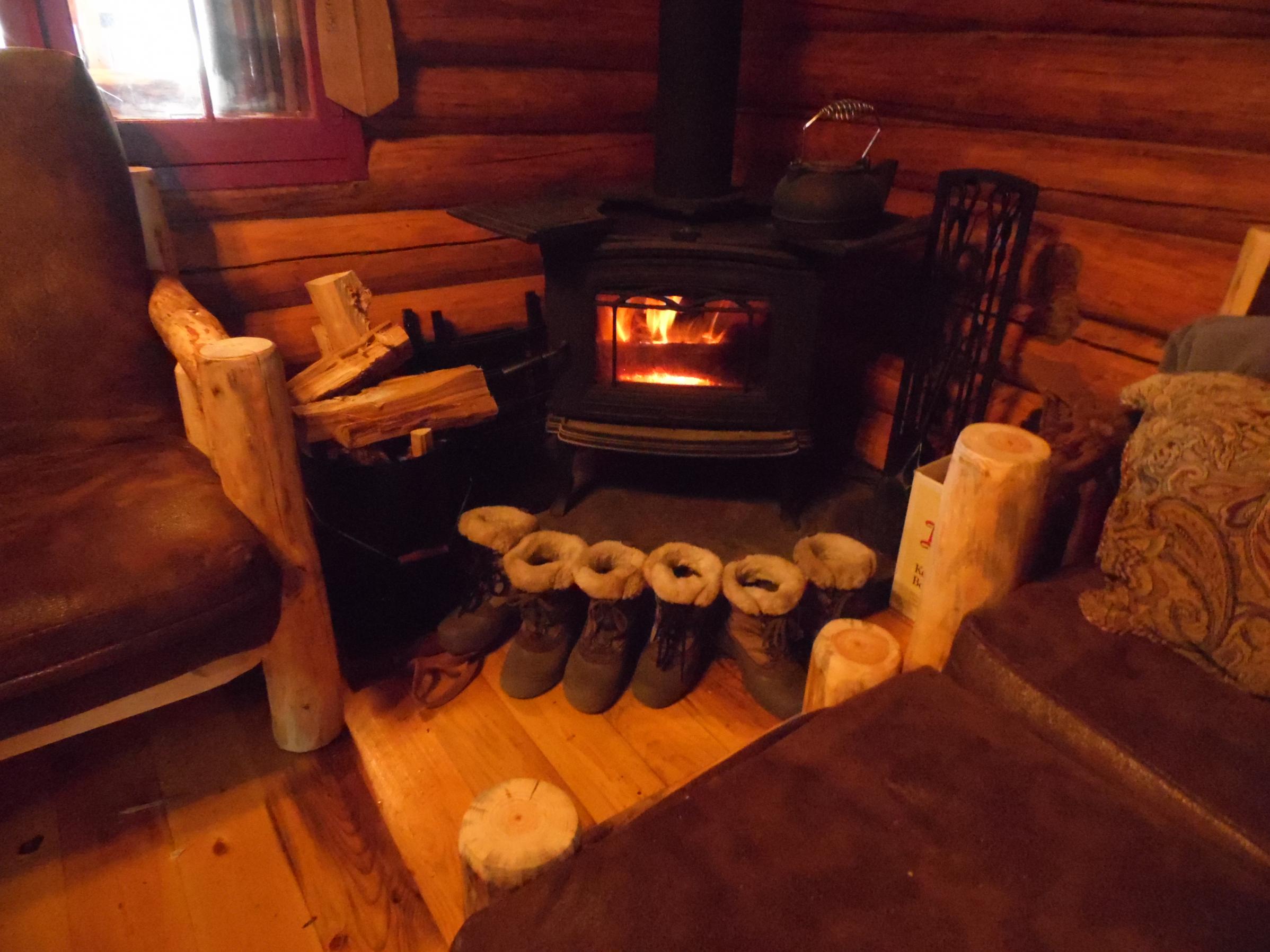 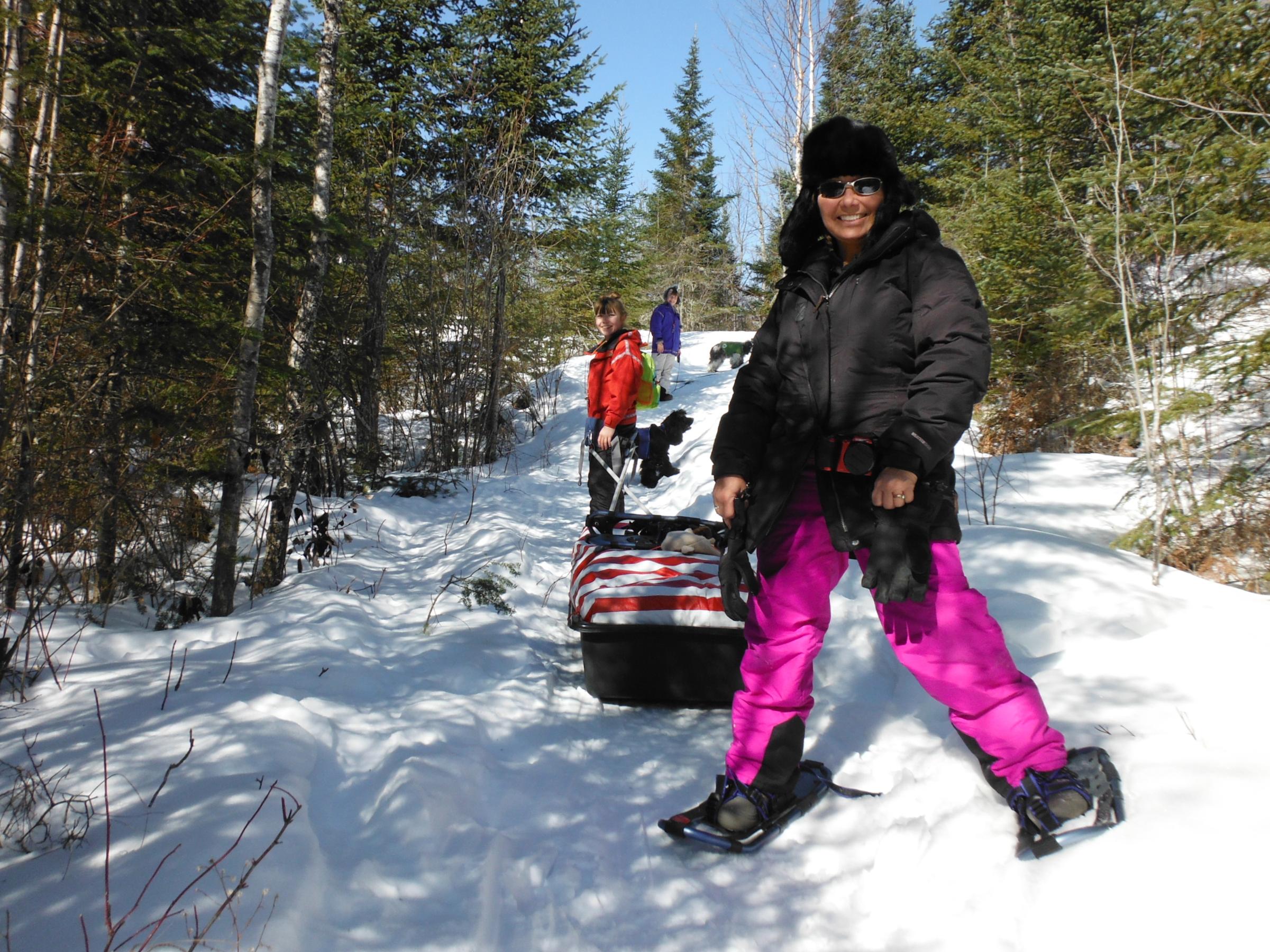 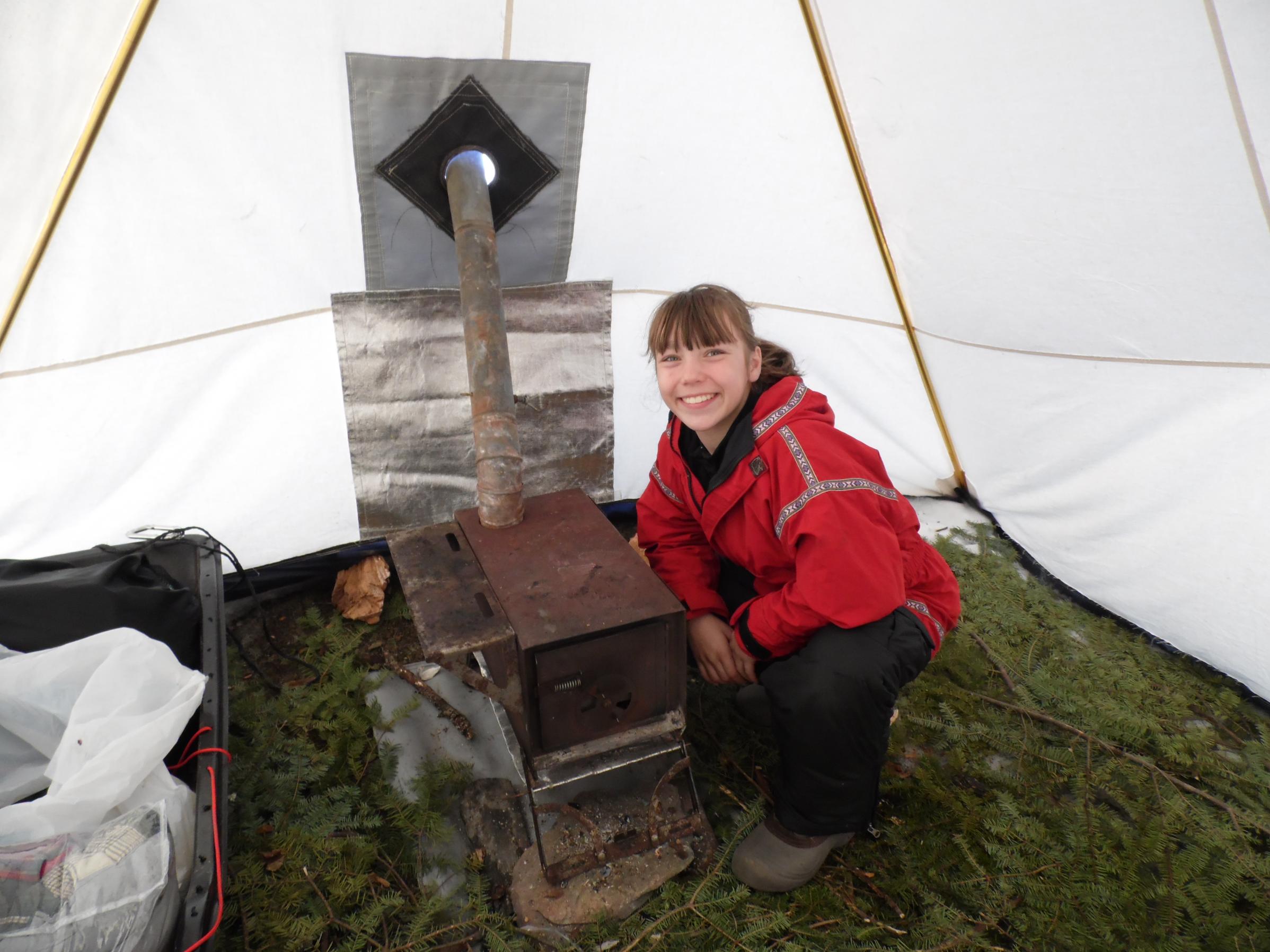 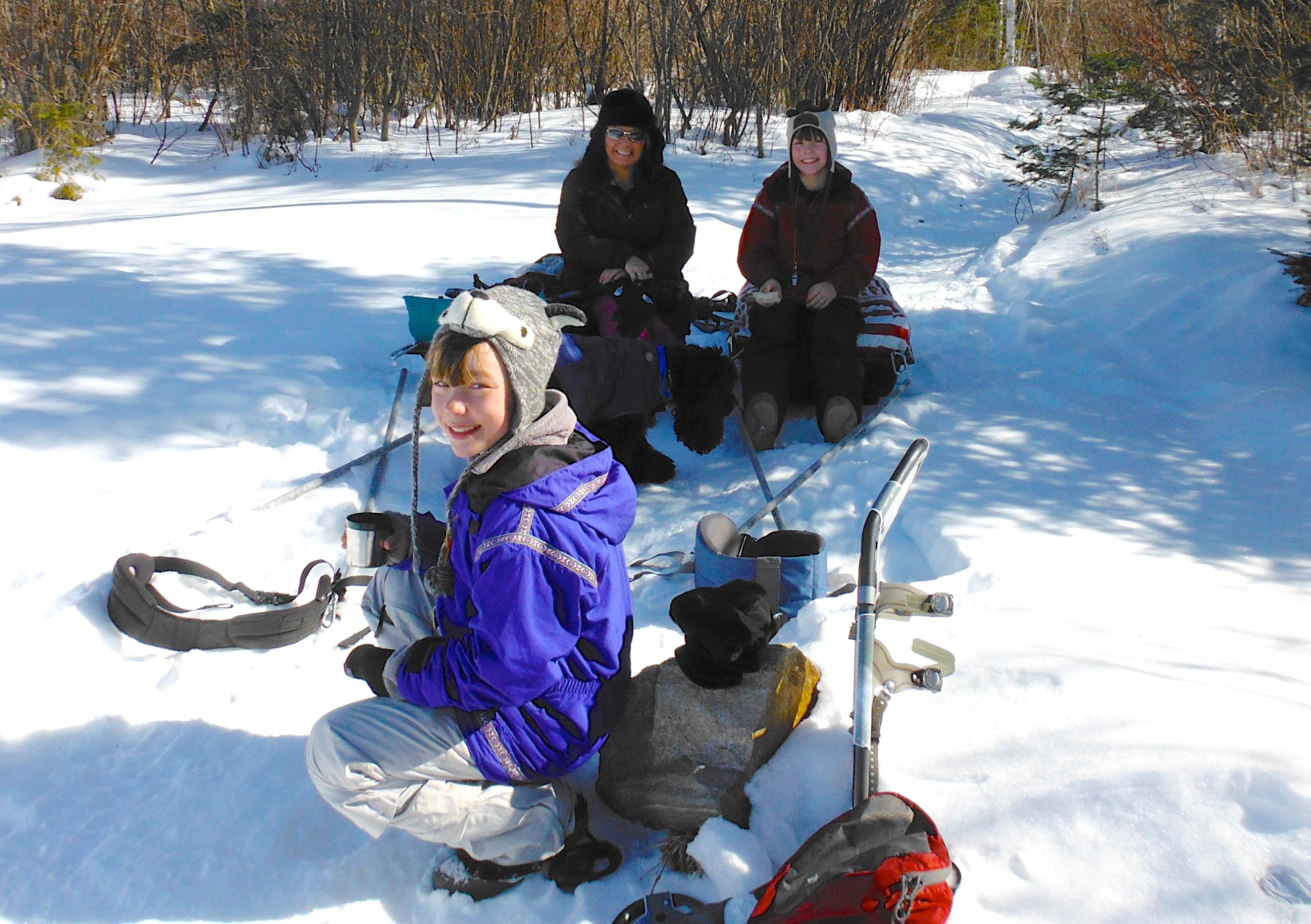 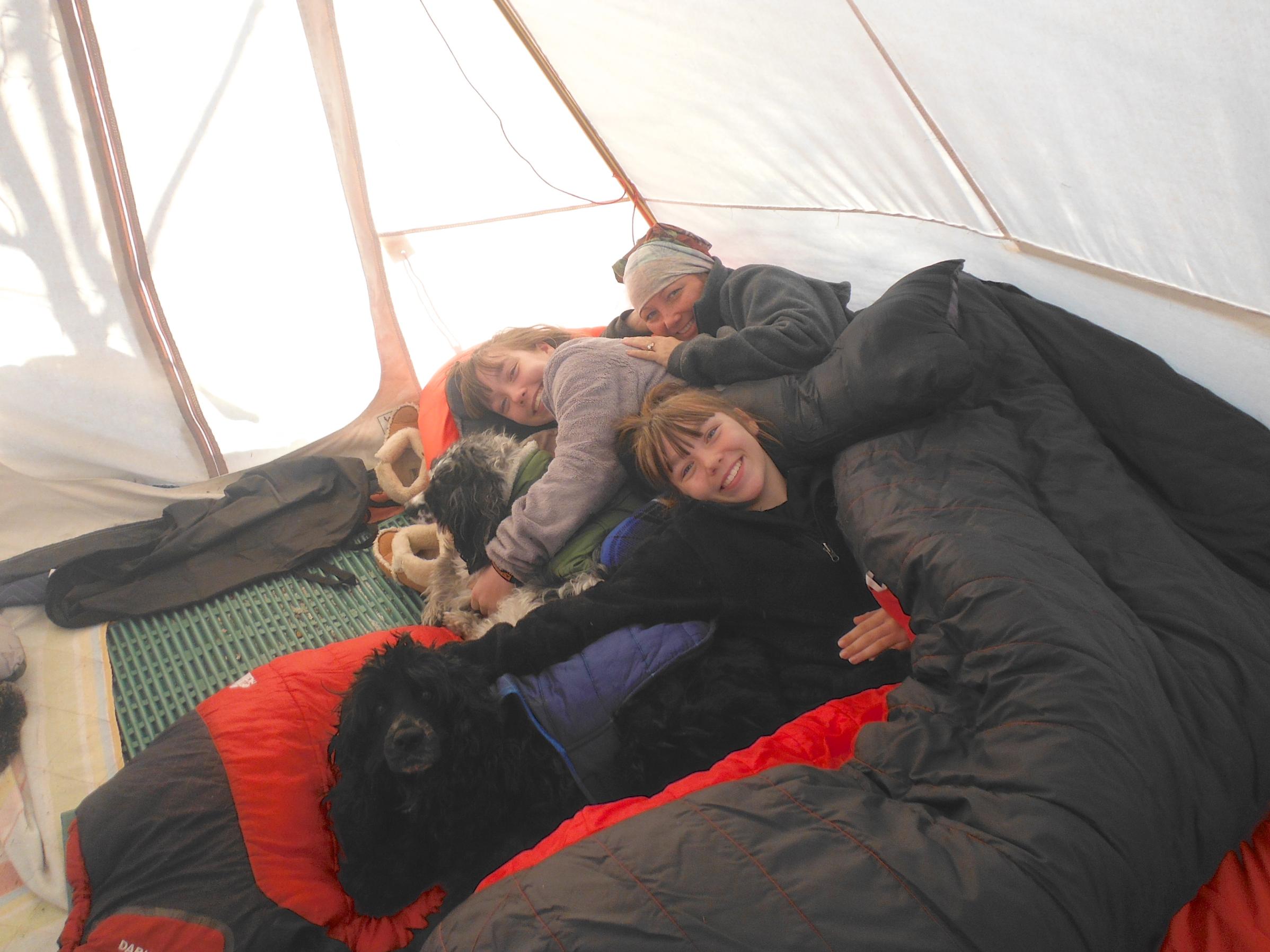