Trip Type: Paddling Canoe
Entry Date: 10/05/2013
Entry Point: Daniels Lake (EP 61)
Exit Point: Clearwater Lake (EP 62)
Number of Days: 8
Group Size: 2
Trip Introduction:
We have been blessed with knowing many willing & capable trip partners. And, in their own way, they all add something positive to the trips we share with them. But, it had been approximately 2 years since Vickie & I had been able to enjoy a trip where it was just us. So this trip was dedicated to that premise. Although there were some tough portages, we moved at a very deliberate pace to maximize our enjoyment of this wonderful area & each others company.
Discuss Trip: View Discussion Thread (8 messages)
Day 1 of 8
Saturday, October 05, 2013

Even though we had burdened ourselves with a late arrival at Clearwater outfitters, our bunkhouse was blessed with its’ own private bathroom, which aided us in getting an early start this morning. After a leisurely breakfast, we double checked our packs while we waited for the outfitters to open for the day. Vickie then gratefully grabbed one last mug of fresh hot coffee before we drove off to the West Bearskin landing to drop off the Black Pearl & our gear. Soon afterwards, we headed back to Clearwater Outfitters - they then followed us to the Clearwater Lake landing to drop off our van, & shuttled us back to West Bearskin to begin our adventure. Unfortunately, rain had started up at some point in the over night. There was also a noticeable wind that briskly accentuated the cool, misty morning temperature. Still, at the time, we didn’t think the paddling was the least bit troubling or uncomfortable. Later, when looking back at our pictures, we were somewhat shocked when they seemed to show considerably worse conditions than what we remembered. I guess we must’ve been somewhat blinded in our excitement to finally start this trip? 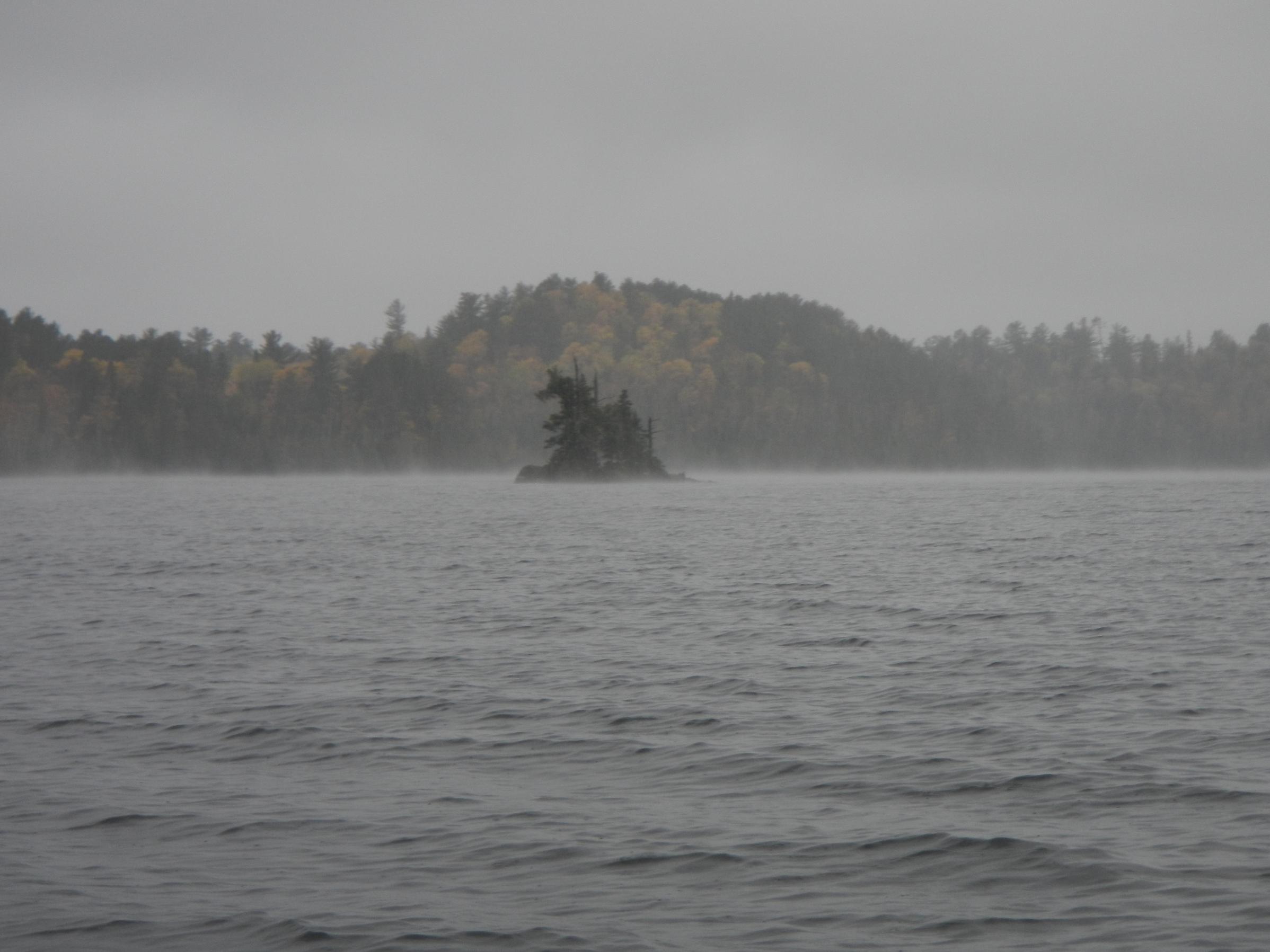 As expected, the fall colors were in full swing. But, to a certain degree, the current conditions (gray gloomy clouds coupled with rain & fog) muted the usual brilliant color explosion. Still, we were treated to having a bald eagle & loon greet us as we paddled across West Bearskin to the Daniels lake portage.

The Daniels portage was easy to locate and, (as one might expect for a portage to an EP lake) was a very well worn path. The only discernible impediment was the short climb out of Daniels, which only comes into play if heading towards West Bearskin. Per usual, my Icebreaker merino wool mid-layer performed excellently. Besides being warm & comfortable, the thumb loop holes are another aspect I really appreciate while portaging. These prevent my sleeves from rolling up when throwing a heavy pack on my back. (a particular peeve of mine.) It wasn’t even necessary for Vickie to come back across the portage a second time (although she did). We were able to get everything across in a portage and a half. It had been awhile since we could claim to have done so, and it was gratifying to see that we were still able to easily accomplish that task. The fact that the packs were at their fullest/heaviest while doing so, only added to the level of satisfaction. 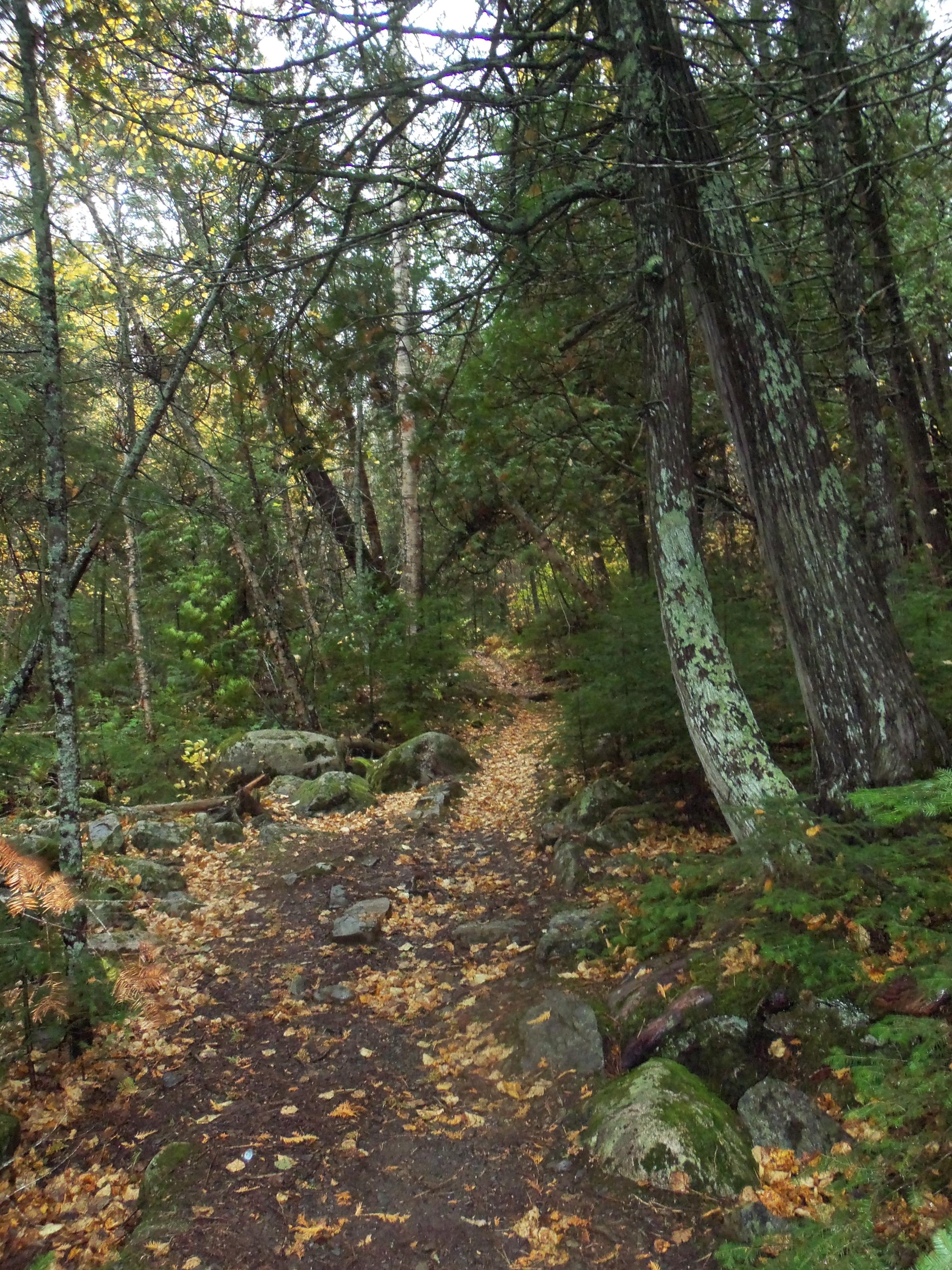 By the time we finished the portage the rain had stopped, but, the wind was beginning to intensify. Since we wanted to avoid the 2 sites situated along the Daniels Lake hiking trail, we hastily paddled our way north across Daniels, quartering the waves that were rolling down the lake from out of the east. After a successful crossing, we pulled into (what we thought was) the first campsite. It was certainly nothing special. A mediocre landing, subpar fire grate, not much of a view & no really flat tent pads or good tarp options. Our initial mutual assessment was to check out the other site along the northern shoreline before fully committing to a camp. But, during our inspection of the site, Vickie had poked her head out by the shoreline and noticed a real froth whipping up further down the lake. So, for better or worse, the decision was made to call this site home. (We did search for the next/other site along the north shore later in the trip & never found it. Also, looking at the map more closely back home after the trip, we determined that this was actually the 2nd site to the east from the West Bearskin landing. This also might explain why we had so much trouble locating the other site. ) 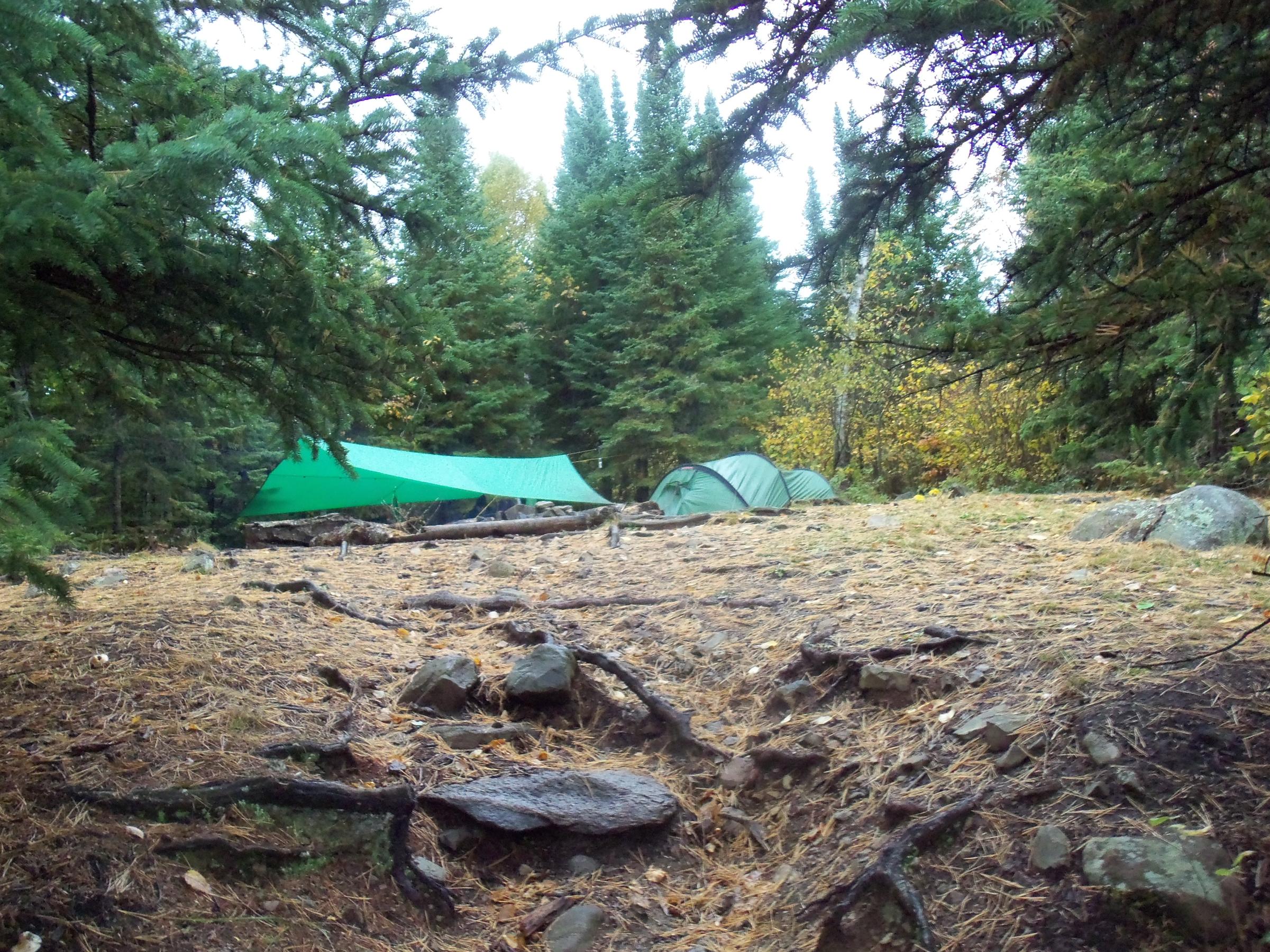 So we proceeded to get camp set up, and not a moment too soon. A misty rain had returned & intermittingly persisted for the duration of the evening. Afterwards, thankful for the decision of claiming this camp, rib eyes & cheesy potatoes were savored while wind, waves and rain absolutely wreaked havoc out on the lake. In his book “The Singing Wilderness”, Sigurd Olson has a chapter dealing with pine knots & the intrinsic value they possess as a natural accelerant to help get a strong fire going. I didn’t walk around the woods to gather mine (I cheated & just knocked loose ones out of pallets at work) but, they proved to be just as effective and helped us carry on that fascinating tradition. A few late night games of cribbage were played under the dry sanctuary of the CCS tarp before eventually retiring to our cozy, warm sleeping bags for the night.