Trip Type: Snowshoeing
Entry Date: 02/14/2014
Entry & Exit Point: Other
Number of Days: 4
Group Size: 1
Trip Introduction:
While I have had a few short winter cold camps, this was my inaugural trip for my new Snowtrekker tent I call the "Canvas Palace". I used a double pulk system to haul gear into Whale Lake from Eagle Mountain Trail entry point #79, which does not appear on the trip report drop down for some reason. I think some people think of winter camping as a hardship, but this was an absolute joy. The peacefulness and solitude so many of us seek in the BWCA is amplified in winter. This is my first trip report, and i am amazed at how much I ended up writing.
Discuss Trip: View Discussion Thread (7 messages)
Day 1 of 4
Friday, February 14, 2014

I woke up early in Princeton MN at my sister’s where my dog would be spending the next several days. I’m on the road by 7am, and into Duluth by 9am and Tofte at 11am where I loaded up on carbs from the bakery and reloaded my coffee. Then it was on up the Caribou Trail and just a little before noon I pulled into the parking lot for Eagle Mountain Trail, BWCA entry point #79. 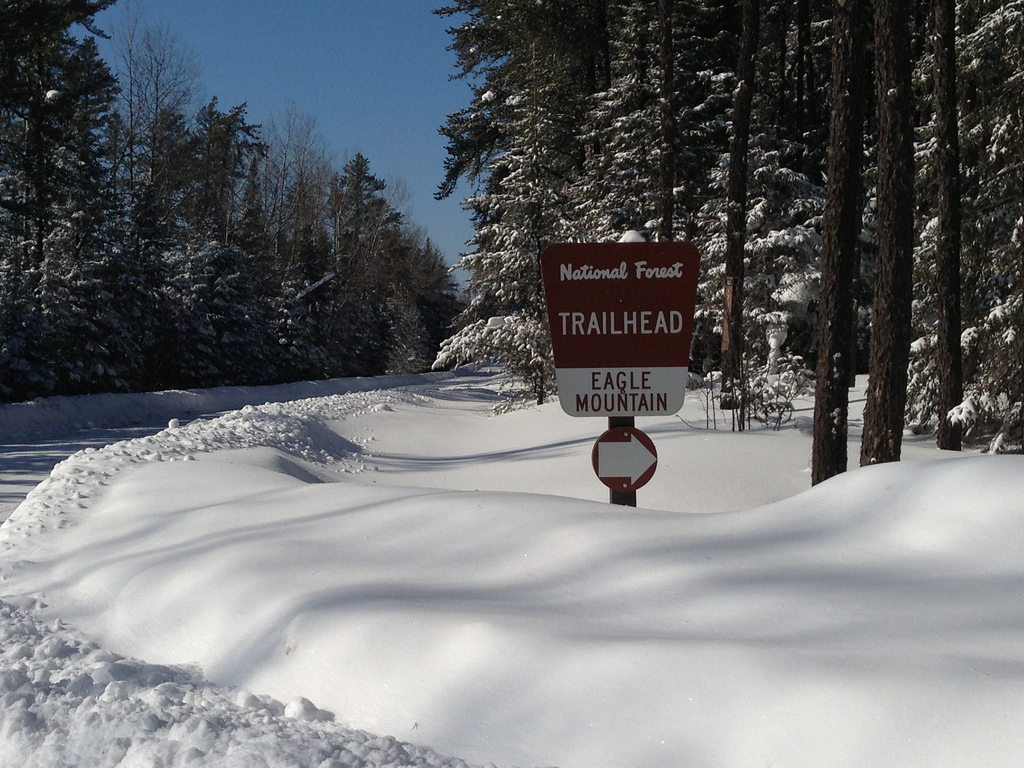 My gear was loaded onto two sleds - a black Paris Expedition in the lead and a trailing blue kids sled. Summer or winter, anyone who solo’s realizes you have to carry 100% of the community gear. I’ve managed with my Paris Expedition on a short cold camp trip, but with the new hot tent and stove there was just no way to fit it all in there. And it didn’t help that I chose a bigger Snowtrekker, the 9.5 x 11 foot Basecamp with a medium sized stove. A smaller 8 x 8 would have been convenient for this trip, but I have other trips in mind for which by big basecamp will serve me well. 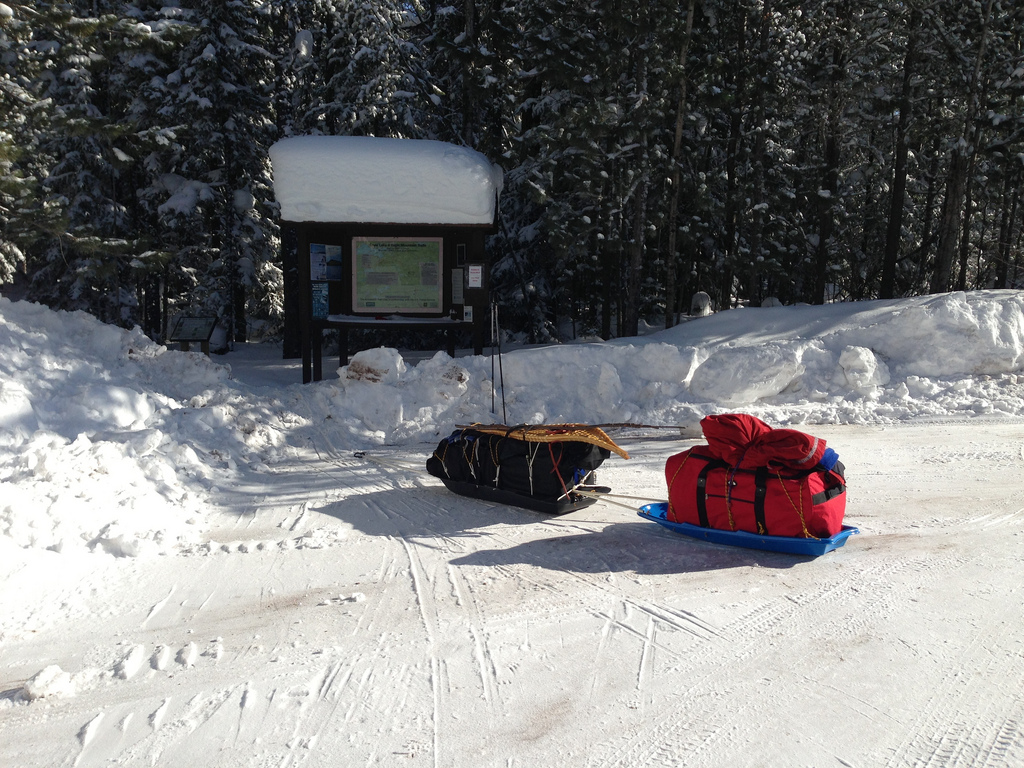 I had read posts on this forum and on wintertrekking.com that suggested a double sled system should work, but showed up at the trail head with mine untested. I had used two pvc pipes with ropes fed through to attach me to my Expedition on my last trip, and I decided to try using a similar approach for the blue trailer sled. I had snowshoed this trail before and knew it was hilly and twisty, so went for a connection design that would corner well. I ended up using two 30 inch or so pvc pipes attached to the blue trailer sled, and used a single point connection to the back of the Expedition. I thought it would be like a trailer following a truck, and long story short, it worked great. The single point connection allowed one sled to turn before the other, and the pvc pipes kept the tail sled from ramming into the lead one going down hill. 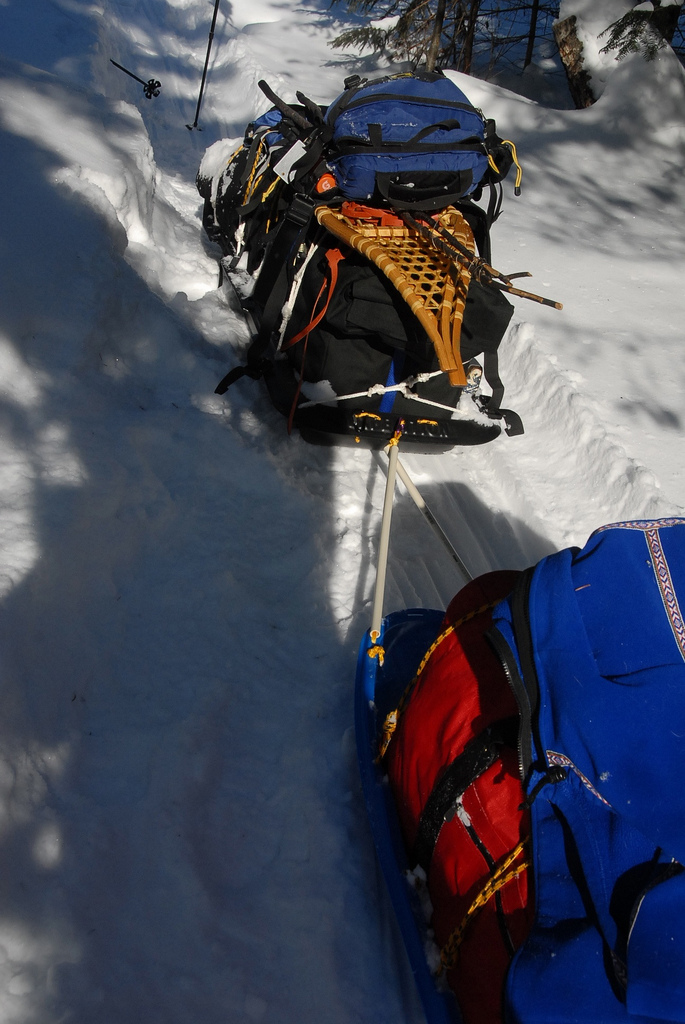 By 12:30 I had my sleds in position, my trekking gear on, and my car tucked away beside two others. I issued myself a permit, and checked the trail. There had obviously been another group through that morning so the trail was narrow but well packed. I chose to leave my snowshoes on my pulk and go with boots, which worked well at least at the start. It was certainly an effort to pull the sleds up the many short hills, but overall it pulled very well and was quite easy on any flat terrain, and ran downhill like a freight train. I didn’t posthole through the path in my boots until I got to the first swamp where the BWCA Wilderness border sign is, and only occasionally after that. Except a couple of times when the freight train was running downhill, I stopped to repair my postholes.

Short stops were common, in part to rest and in part to try not to overheat. It was about +8-10°F / - 12-13°C, and the wind was pretty strong from the north though I did not feel much in the dense part of the woods.

One of the things I love about the area in winter is the tracks show the history of the animals. On past trips I have seen plenty of prints telling interesting stories, but sadly on the trip in I saw only one set of faded prints - probably a deer - crossing the trail the entire way in.

About 3:00pm I got to the south end of Whale Lake, which is about 3 miles / 5k in. At this point the snow got deeper and softer, and the snowshoes had to go to work. The tracks of the group in front of me veered off the trail and onto the lake, heading directly toward the campsite on the northwest side. I had no interest in the other campsite on the south side which would be pasted by wind, so headed out onto the lake and broke a trail for a bay on the north end. Having to break trail was tough work, but I was very motivated to get out of the strong wind that was right on my nose. I was very glad that I had recently added a good ruff to my anorak. My hands, however, were really cold. My liners and thin shell outers were wet from sweat and snow from the trip in, and now out in the wind it was tough. The only way to solve this problem was to just push on through and set up camp. I put my head down and went as straight as I could. Before long I was getting near trees and the winds were not as fierce. I dropped my pulks near the shore and checked out possible tent spaces tucked in the woods. Nothing was flat and large enough, so I chose to set up the tent just a little further north in the bay out about 30 feet from shore. Snowshoes on, I tamped down my tent pad and then went to look for firewood while the tent pad set hard. 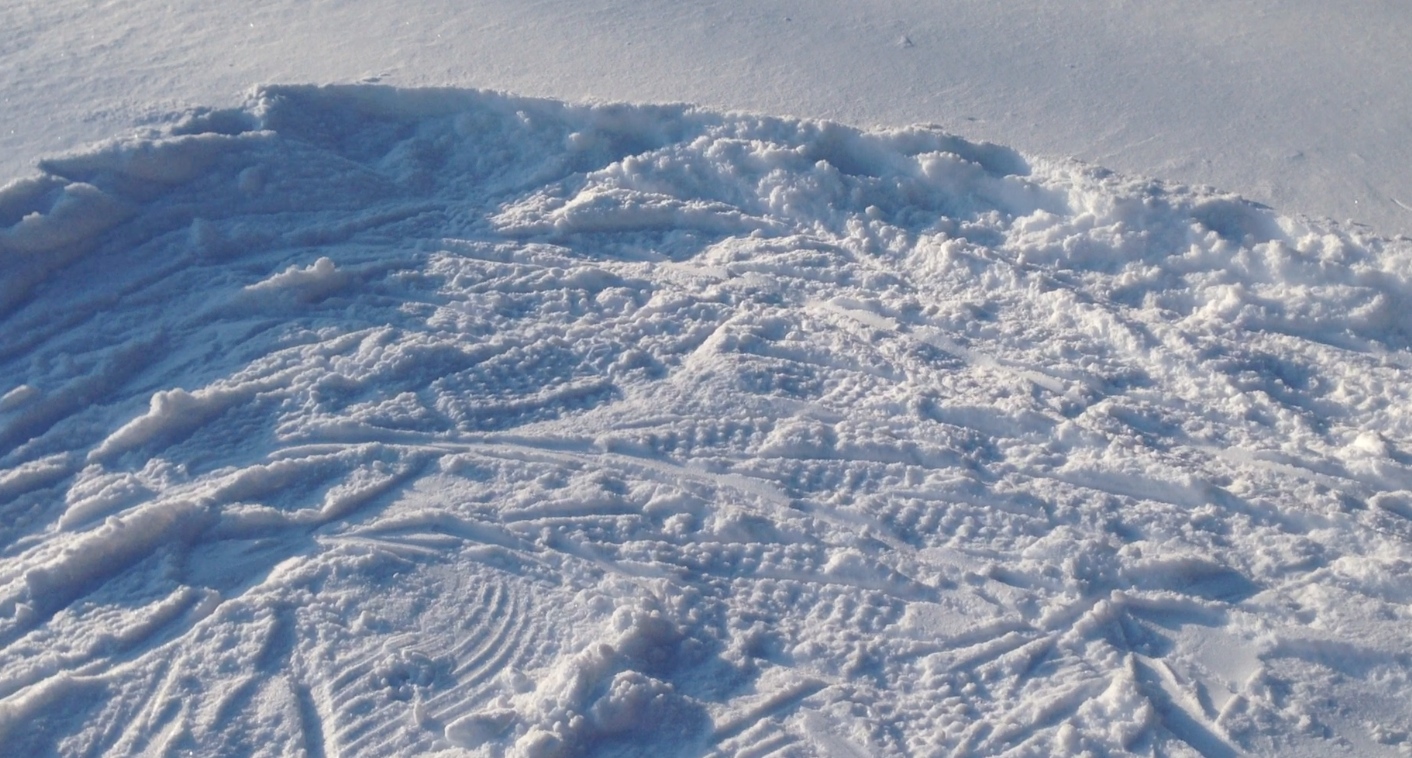 There were several good, small trees down just into the woods far enough that no one from the lake could see them. I sawed them into sections and hauled them back to where my tent would be, and sawed and split just enough for an hour or two of burn in the stove. I usually like to do all the chores at once, but was too cold and tired to load up on fire wood at this point - I would be willing to head back out and cut and split more later. I set up the tent facing south which would protect the door and allow me to watch anything that might cross the lake. I left the guy lines loose while sticks to anchor them set firmly in the snow, and went out away from shore to drill a hole for water. It was almost 5:30, and the sun was quite low, but all I had left now was to tighten the guy lines and light the fire.

By 6:00 the gear was all stowed away, the stove was cranking out the heat, and my fleece pants were putting out visible steam. Layers came off one by one and hung in the higher warmer part of the tent. The temperature outside dropped quickly to -5°F / -21°C, and inside was topping 50°F / +10°C and rising. I enjoyed the internal tent heat for a while, then started by Camp Chow Pasta Alfredo while having some trail mix as an hors d’oeuvre along with a touch of whiskey, just enough to serve a ceremonial function to celebrate the establishment of basecamp in my Canvas Palace. Winter camp is on!

After dinner cutting enough firewood for morning was no problem. By about 9pm, I stoked the fire for the last time, turned down damper, and was out. 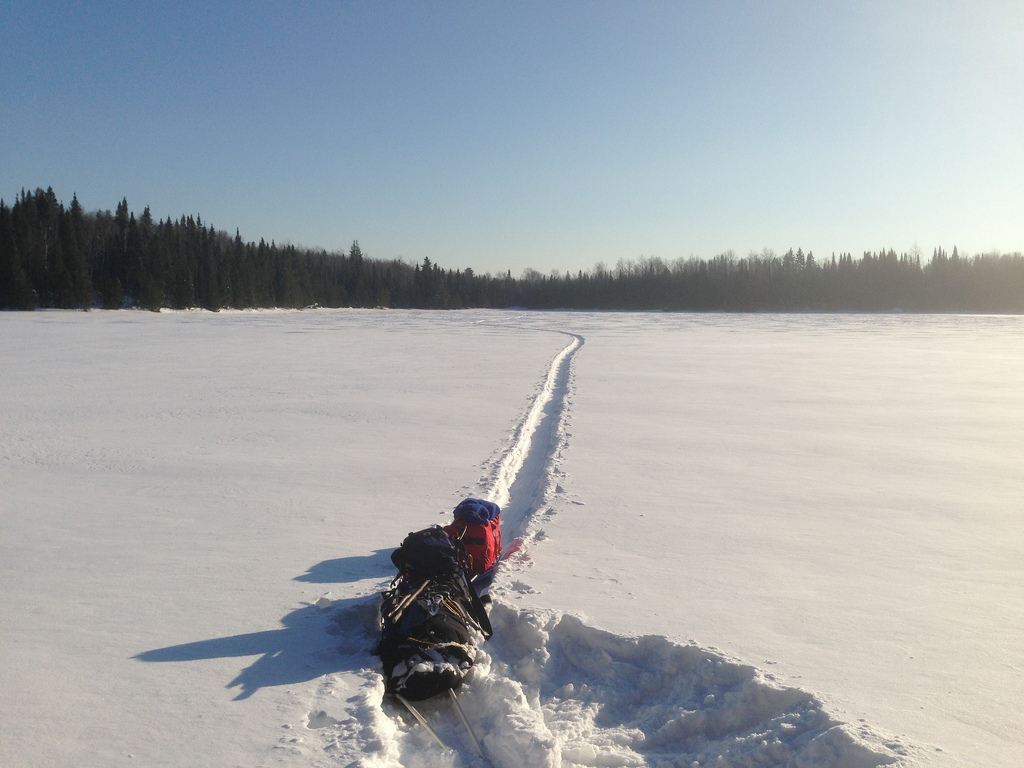 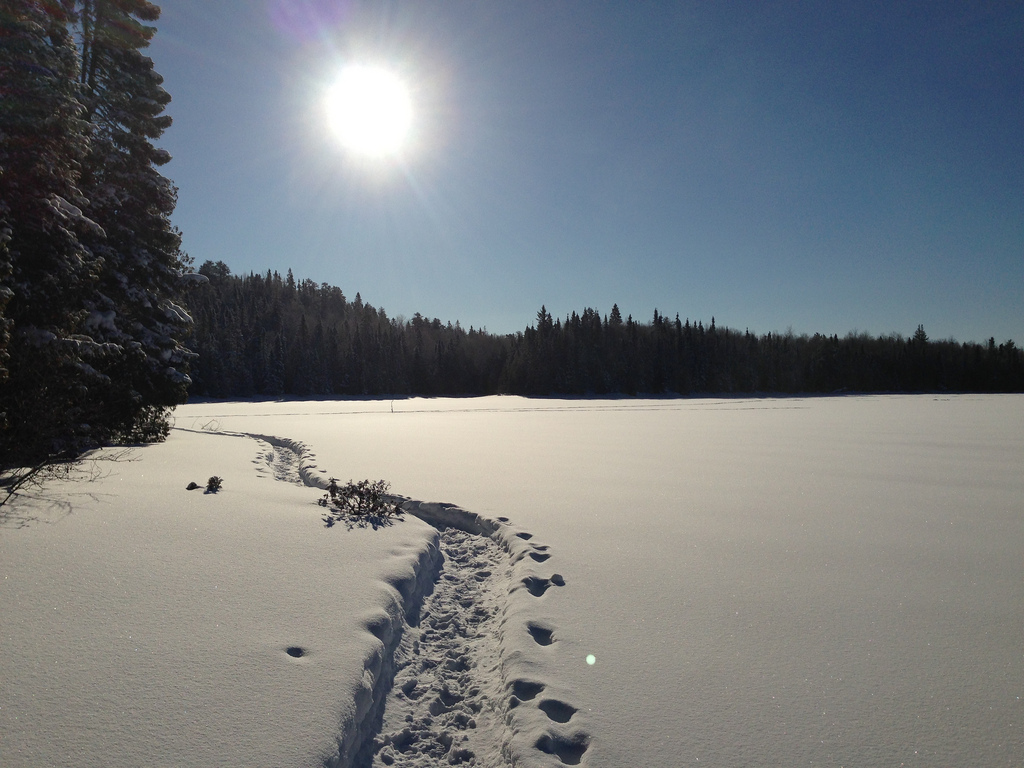 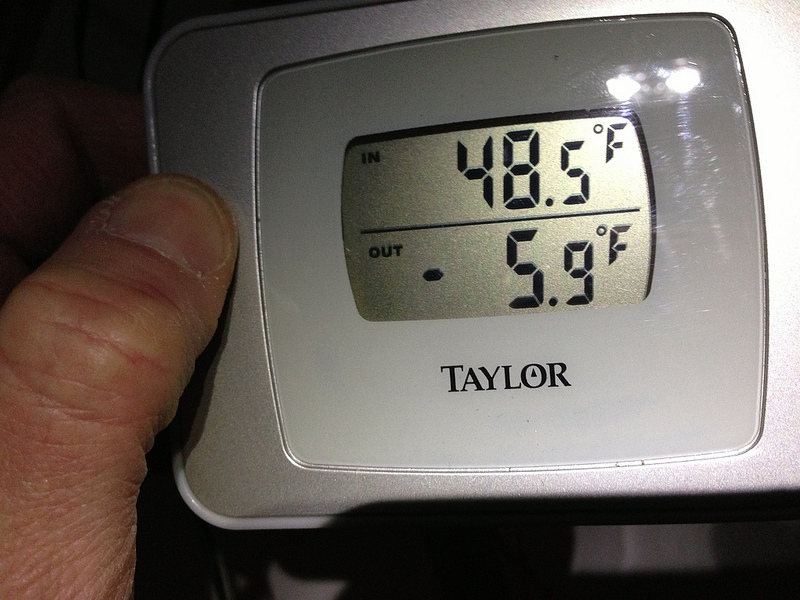 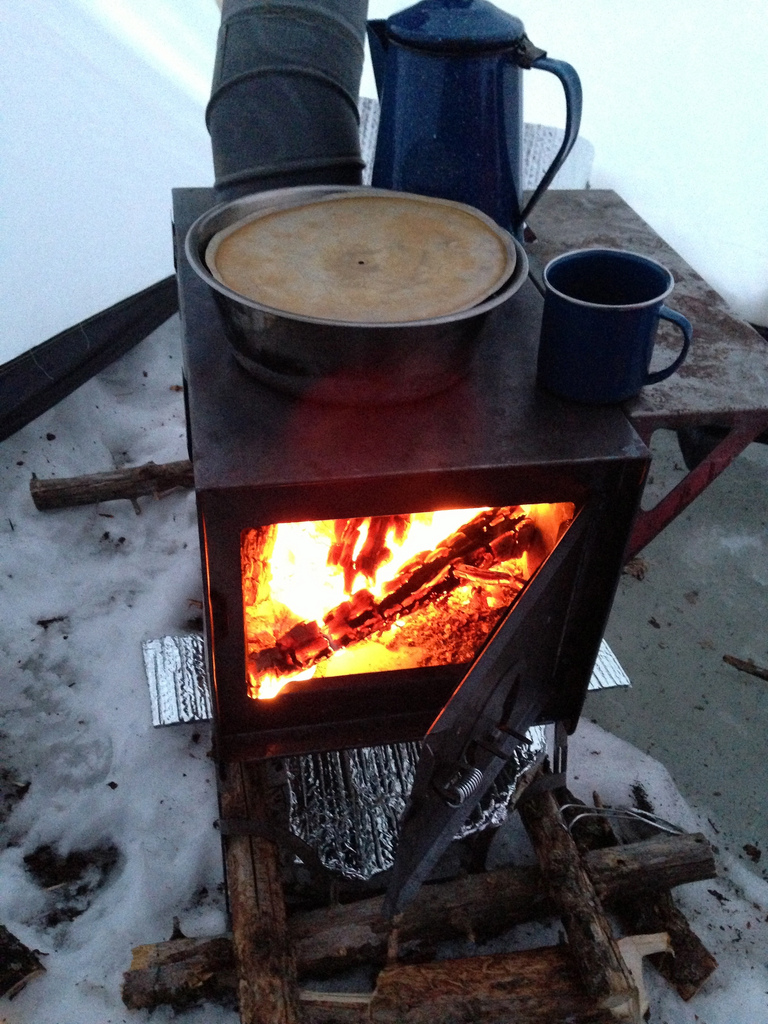