Trip Type: Paddling Canoe
Entry Date: 08/06/2014
Entry Point: Other
Exit Point: Other
Number of Days: 9
Group Size: 1
Trip Introduction:
This was my 38th trip into the Woodland Caribou. This time I paddled solo with our young lab/Birch. It was Birch's fourth time into the Woodland Caribou but the first time that he was without his boss/my wife/Carol.
Discuss Trip: View Discussion Thread (10 messages)
Report
The calendar said August and tradition said paddle solo in the Woodland Caribou. Since 2002 when I paddled with our lab/Rugs I've had the good fortune to dash into the WCCP for a week to ten days and meander through the park.

So I brought our young dog Birch, turned the Wenonah Spirit II "backwards" and looped from Leano into Kilburn, ignored the 1000 meter portage, and headed through the Middle Kilburn to Talon Lake. This is old country for us, as my wife Carol and I first paddled here in 1990. Middle Kilburn became Six Loon as they followed every move. This year, from Six Loon, Birch and I headed west towards Dragon Lake. In 2011, I did this route with Zip/a hobbling 11 year old lab and was pleasantly surprised as the beavers flooded most of the area covering the first portage. This year the beavers are gone, and the there is enough water to pull the canoe through and over a floating bog, then into a pond, and then to the start of 550 meter trail. The game was pull the canoe onto the bog, let the bog sink, then pull/float until we needed more water. Birch, a hyper three year old lab, hung tough in the canoe, stared as I sank on the bog occasionally, and leapt out when we reached the west shore. The portage into Dragon was clear of "snowfalls" of 2012 and the small, biting flies were in prime condition along the way...The portage was blocked by numerous blueberries which caused the route to slow down to a crawl.

On Dragon, I paddled to the sandy beach on the south shore where a portage leaves to Boomerang. Huge drops of rain hit us before the beach, which made the swim, time for retrieves, and the just hanging out on the shore special. The trail south isn't used except for moose, the beach is covered with numerous tracks, scat, and stories about life in the Woodland. Dragon is unique as over time the beaver dams have raised/and lower the lake and creeks flow out of the lake in two different directions.

Birch and I paddled west of Dragon through a 50, 300, and 100 meter series of portages. Each is clear of down falls, each is not used, and each is somewhat woody of new undergrowth. It is a wonderful route, close to Leano that is ignored by many people. We camped on Crow Lake: because an island on the west end of the lake has crows always crying at me. During this paddle west of Dragon, thunder boomed off the rock, lightning put us ashore, and one felt the spirit of the land.

From Crow Lake, I struggled to get to Talon. A new trail system in the northwest corner was blocked by windfalls at the take out and up the hill. Thinking, maybe the old, 400 plus portage was still useable, I paddled south, wandered down it and wondered what the heck I was doing in a series of windfalls, tangles, and snares of tipped over trees. I returned to the new trail, cut my way up the hill, found the down side cleared of any trees. Good thing it was hot, muggy, and buggy.

The next trail is horrible: clear, old growth, and full of blueberries...it took Birch, a master at eating off the plant and I a long time to cover this route. But, the last portage into Talon/375 meters was full of tangles...in the heat, I made the cuts very slowly, puffed down the trail to Talon, and soaked in this cool water lake...and Birch: he worked under a downfall, with cool moss under him, and branches above to help fight the flies.

We stayed the night on Talon, felt the cool breeze, enjoyed the bugless views of the moon, and headed north the next day...

...a good trip in a series of small lakes between Talon and Paull. We repeated two portages, dropped into a small, flat rocked lake, bathed, ate berries, and then worked four more portages. The last being 375 meters that starts in a bog, then runs up a ridge before dropping into a wonderful lake. The last 100 meters had recent blow downs to skirt around. We camped on a peninsula in an eastern arm of the lake...on a slope that had a long flat rock for a kitchen.

From here, we watched the moon rise, listened to thunder build, enjoyed the rumble across the rock, smiled as a storm went north. Our paddle in the morning into Paull was cool,less flies, through a lake filled with flat rock, potential camps, and rocky points to fish. It was a short day to paddle, we camped at Paull Lake which is slowly seeing more people and more litter come to its shore. We found a partially burned fishing reg magazine, a clothes line, and the way too often litter of tin foil in the fire pit...

From Paull, we turned south towards Upper Kilburn: six small portages, across some old beaver ponds, the divide between the Bird/Oiseau River and the Sturgeon River. I love this route...hallway is a lake called Confusion. Confusion to me as it is split on the topographic map. So in 1990, when we were hauling an 17 foot Blue Hole canoe through here, the trails were small, the canoe didn't fit between the trees, and we got spun around linking the topos together. Now, the trails are well used, the route has a great rhythm of portage, portage, portage, paddle, portage, portage, portage, Upper Kilburn. Confusion is a wonderful lake: sum jack pine, lots of black spuce, with sloping hills coming quickly to the water. A good camp on the north side of the lake exists.

Birch and I battled the last, short, rocky portages into Upper Kilburn. Take outs blocked by exposed rock in this low water...but the descent to Upper Kilburn is quick to make.

Upper Kilburn is North Brule Lake to wife Carol and myself...it just seems like Brule Lake in the BWCA. Birch and I camped on a long rock point, he retrieved for what seemed lake hours and we talked about turning south to paddle Six Loon and Kilburn or taking the 1000 meter trail east. The old lady, the wind, decided for us. It turned northwest, which meant a free ride for the long Kilburn paddle until we turned north. We choose the trail. A great walk in the woods...large jack pines, popple larger than anyone will ever see in Wisconsin, quiet in the middle of the woods. We did the whole thing/canoe/two Duluth packs, and dog with human in an hour and half...it was cool, few bugs, no flies!!! and lots of berry plants. It is nice to pass through and old growth mixed forest.

We finished after two nights: one on Kilburn, one on Leano. Spent most of the time studying the stars, figuring out the constellations, and watching a few metors pass by.

The Leano Creek is getting low...enjoy the ride...it is a great place. 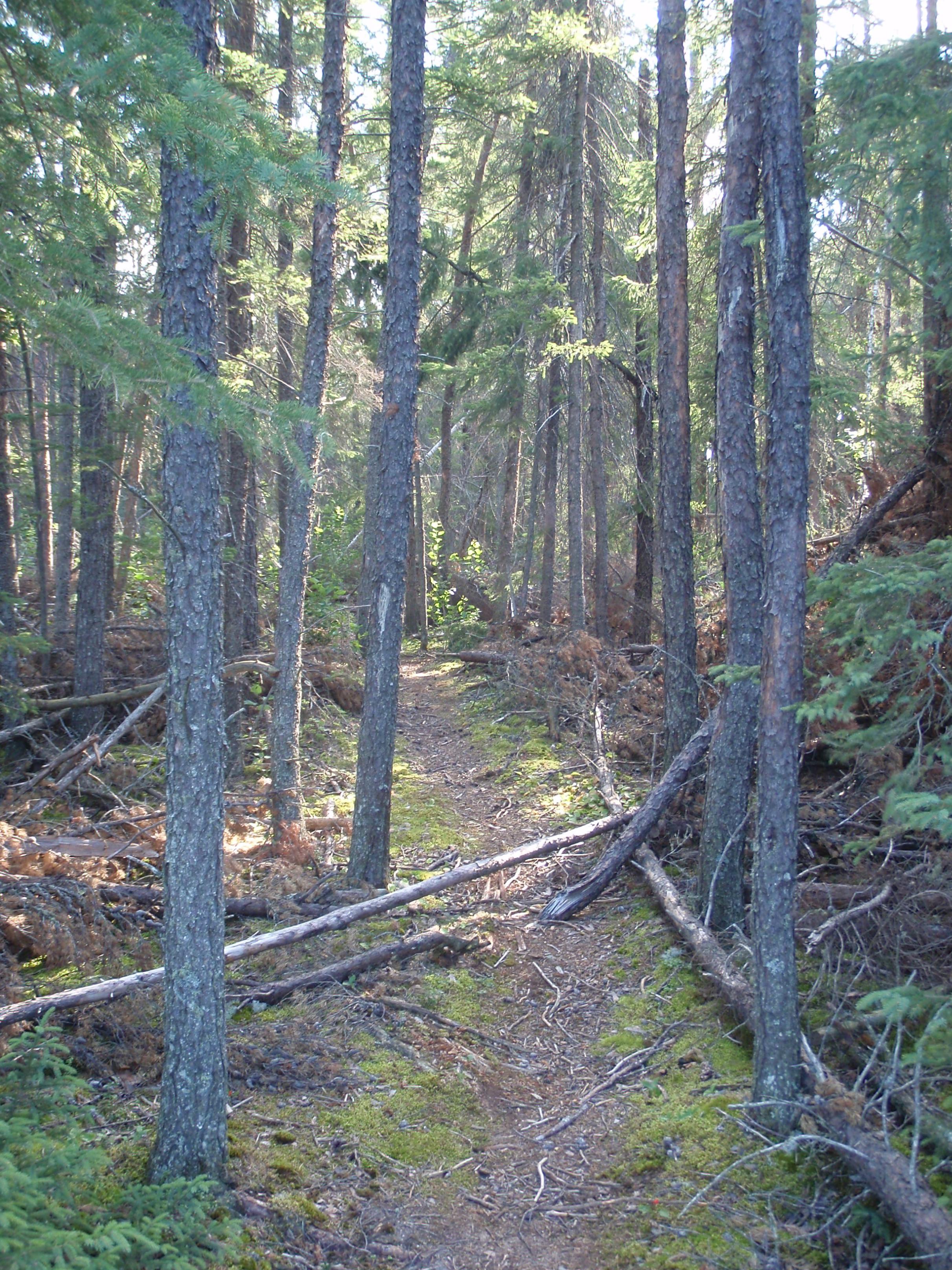 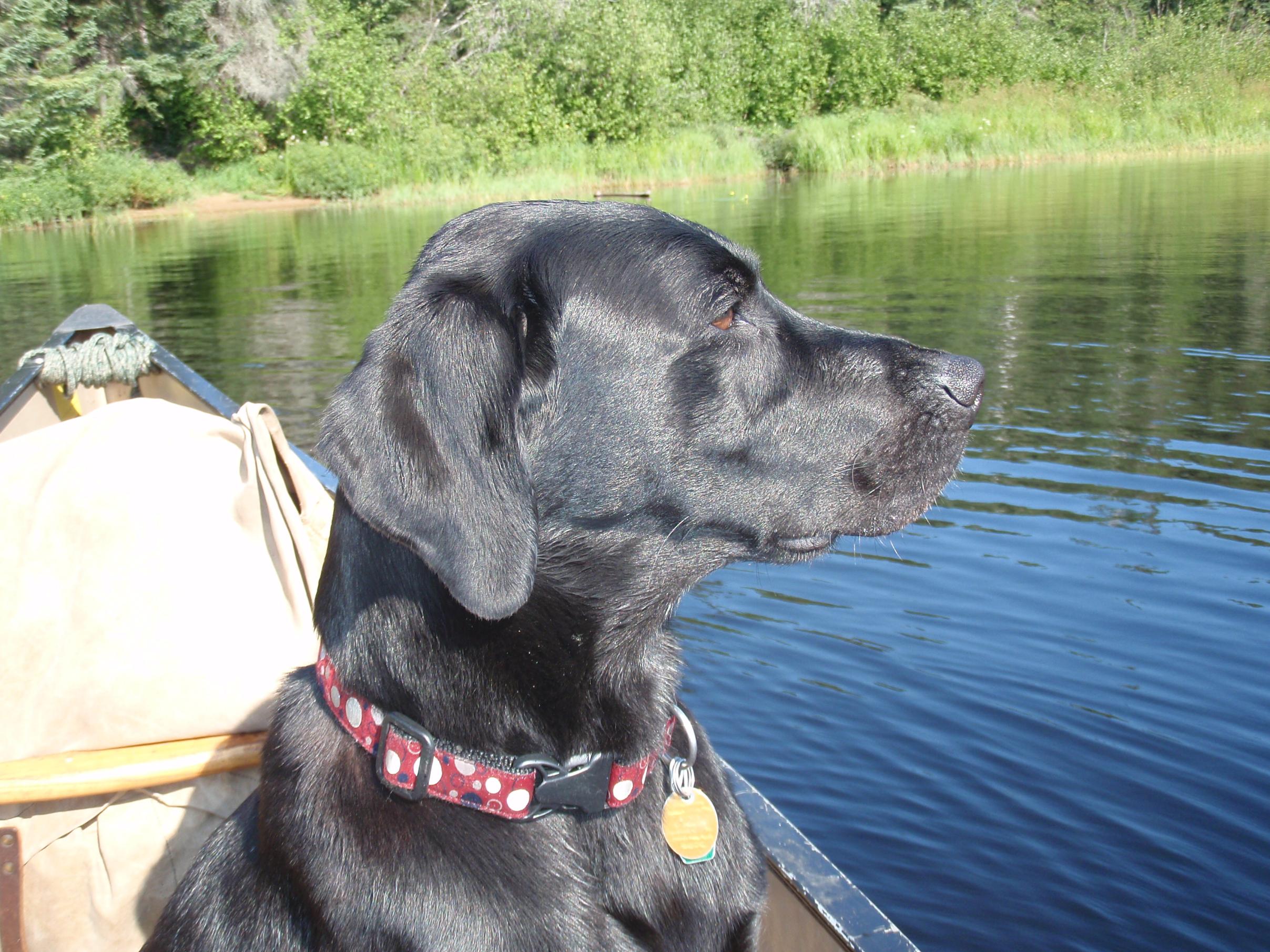