The drive up Friday was picture perfect and fairly uneventful. I received a lot of looks from passing motorists and people when stopped about the beauty of my stripper canoe. It really did look nice and shiny up on the top of my truck and its perfect arches and considerable tumblehome look nice on an elevated mount. Many hours of work were put into this boat and I have been thinking about this trip since I first studied the drawing of the stations. Road construction on 61 along the shore was quite backed up (is it me or are they always working on that road?) With the detour up Hwy 1 to Finland I was getting nervous about missing the 4:30 closing of the Ranger Station in Grand Marais. Not wanting to chance it any more, I swung into the station at Tofte and made up my mind that I should always pick this as my pickup location. The employees there are very nice and I love the small personal atmosphere of the place. I also had the great fortune of talking with a couple moose researchers for the U of M who were there getting a permit to study aquatic vegetation near Poplar Lake. They are a couple guys in a large army who are studying every angle of the moose decline and these guys knew their stuff!

Permit in hand I headed for Grand Marais and stopped at My Sister’s Place for a moose burger before heading up the trail. I had just received my food when in drives a couple with a flying moose on their roof mounted canoe. It was Retired55 (I may have this wrong, please correct me if so) and they had tried to get onto Seagull that day but the high winds were keeping everyone off the lake. We had a nice discussion and the guy even offered to give me the leeches he wouldn’t be using! I hope he and his wife still had a great vacation. Next I headed up to Trails End campground for the night to allow me an early start the next day. About 10:00 PM the wind just died, wow was I ever happy. All fears of the wind melted away and I slept well.

Saturday morning hardly a cloud in the sky and it was blowing again, a steady 5 -10 mph breeze from the west, not bad I thought. My plan was to simply skirt up the west side of the lake, stay out of the wind, no problem. 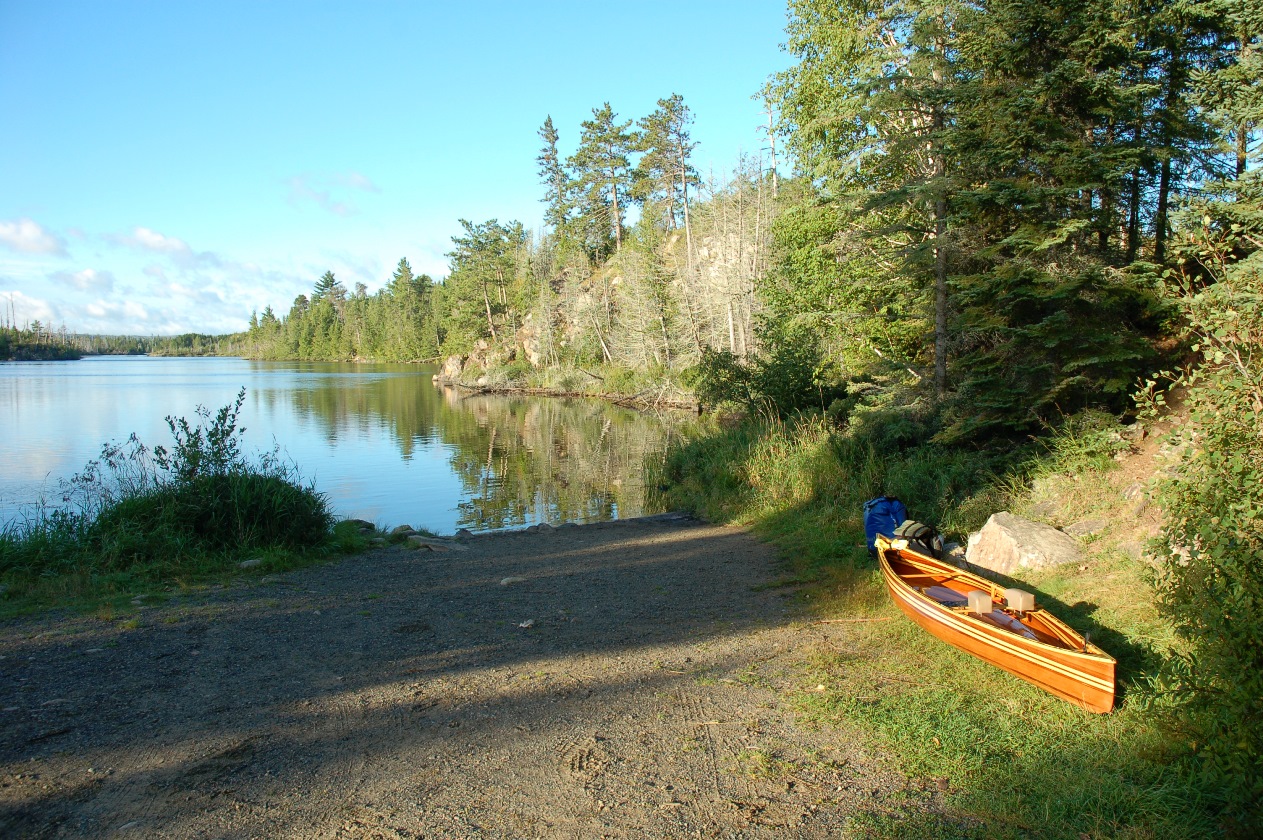 Headed out about 8:00, I didn’t see a single other person moving in the campground, at the landing or at the beginning of the lake. Weird since 6 permits were reserved for that day, once again I wonder if many of these “reserved” permits are held by outfitters in case of a last minute customer. Lining the rapids coming into the landing channel went well, although I did put the first small ½” scratch on the hull when I sat too long admiring my great job of lining and re-entering like a pro, no big deal either way, it was going to happen.

It was a bit breezy out in the lake and even though I stayed close to shore it was rough at times. I had messed around with trimming the canoe and almost had it where I wanted it. The canoe is 15 feet long and has 2” rocker bow and 1” stern. I ended up with my one big pack (38 lb.) all the way in the front, day and camera bag (12 lb.) slightly in front of center and my adjustable seat in its full rear position against the rear thwart. It was trimmed slightly too heavy front but there wasn’t an easier way except to put the day bag behind the seat which made access to it difficult. Either way, it tracked well but still turned easily, although too easily in my final thoughts.

I headed down the lake only really struggled when rounding the point at the palisades. It wasn’t too bad, just hard work to get to the west shore again. Solo tripping lesson 1 sank in at this point, it is WAY more work than in a tandem canoe. Stop to rest, take a picture, look at the map, take a drink whatever, you have no one else to keep you going. Simple concept I know but for me I didn’t appreciate it until I was in the moment. Once the glide is over it is over and you are at the mercy of the wind. About half of the campsites on the west side were occupied, I thought this was September, way more people there than I thought. They were probably trapped there by the wind the day before and were taking a well deserved rest.

After about 2 and a half hours I was at the portage to Alpine. I had stopped to check out a couple of campsites and didn’t really hurry at all. First trip over the sidewalk to Alpine with big pack, paddle and life jacket was done and on the return trip I met a group standing and admiring my canoe. They were a nice bunch of guys including a father-son team and relative from upstate New York. Alpine was a mess, probably 15 mph steady west wind hammering right into the portage. OK new plan, I am probably not crossing this lake today and will stop the first nice site I see. This happened to be the 5-star island site right by the portage. Due to the wind I had to land on the SE corner, kind of a tough deal. 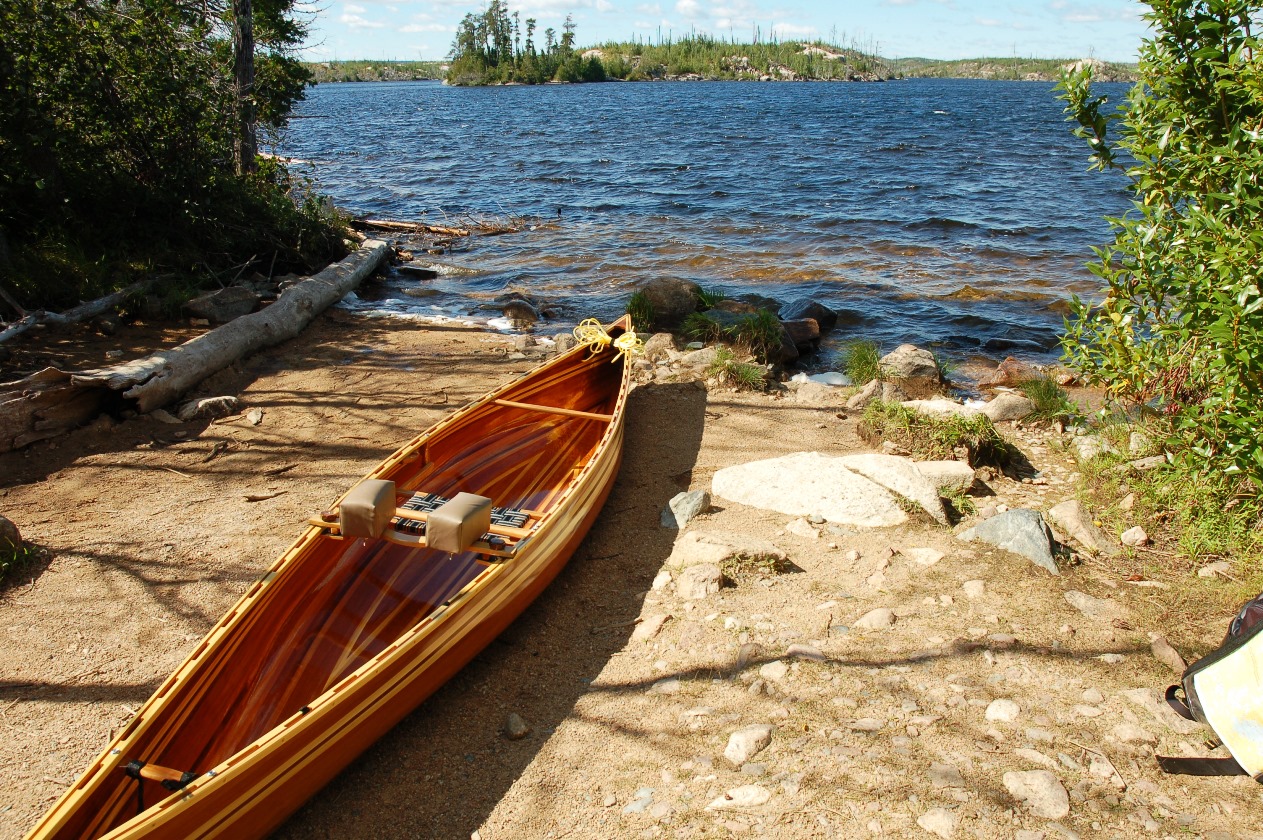 This is a good point to mention one of the challenges in solo tripping (if you are trying to avoid excessively scratching your canoe). There is no one to hold the canoe and if you are a wet footer like me who loads and unloads in the water, you will be short some hands. Unloading wasn’t bad, pull up, hop out in the water, pull close to shore holding boat with one hand and putting light stuff on shore with other. The big pack takes two hands but the canoe is close and was able to unload pretty fast. Loading is a whole different deal but accomplished much the same way. A couple times I cheated and laid a stick down in the water and sat the front end of the canoe up on top of it to keep it in place while I loaded. To each his own, I prefer to minimize scratches, others rent or don’t care and let ‘em grind. This site is huge, not really a lot of good tent pads, just lots of space and places to sit etc. Ate a PB&J sandwich (using dehydrated PB, try it, it is awesome) and set up camp. Next solo experience really set in here, you need to do everything. Pump water, set up tent, plan and execute meals, do dishes… However, the flip side also really sunk in, no debate about where to put the tent, what to eat, when to eat... like someone said, no talking required. Funny, I sat for a while after doing all the chores and started to wonder if I have been talking to myself. I don’t think so, just thinking it out in my head but not really saying the words. Time to go get firewood…

Now the first interesting part of the story. No matter how careful or experienced one is, stuff happens. I was walking around back on the exposed rocks of the island picking up wonderful sun bleached dry cedar trees left from the fire (for those that don’t know, Alpine completely burned in 2005). Walking briskly down the rock through the head high aspen regrowth and WHAM I walk right into a black burned log about as pointed as your elbow. It hit me right in the chest off to one side about three inches and knocked me to the ground. I couldn’t breathe at all and it seemed like minutes before I could. Well, I was carrying my InReach and wasn’t sure if I would need to press the SOS button. A few minutes went by and I felt OK but totally disappointed with myself. I was so very lucky and my chest was sore but didn’t feel like anything was broken.

Back in camp I started making a pizza to cheer myself up. It turned out perfect, my first time making one this nice. It tasted good too although too much to eat the way I felt. A little later quite a crew came sailing by, note there are three canoes jammed in there, wow what a deal. A little later the super moon showed itself and was quite bright in the tent all night. The wind also quit and it was crazy quiet. Many of the sounds of the night came out but I kept all my coaching in mind and had no issues with anxiety, I have never been afraid of the dark but was prepared to deal with it just in case. 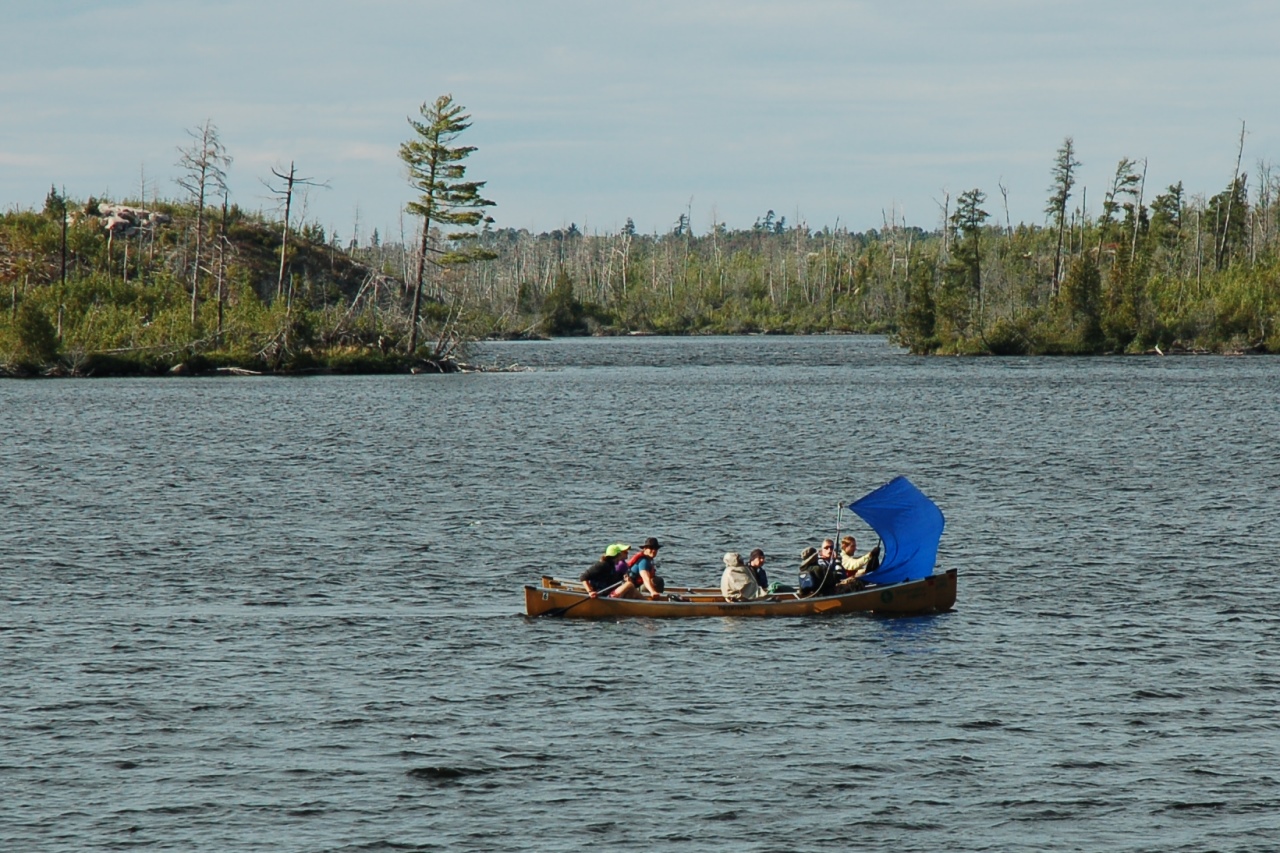 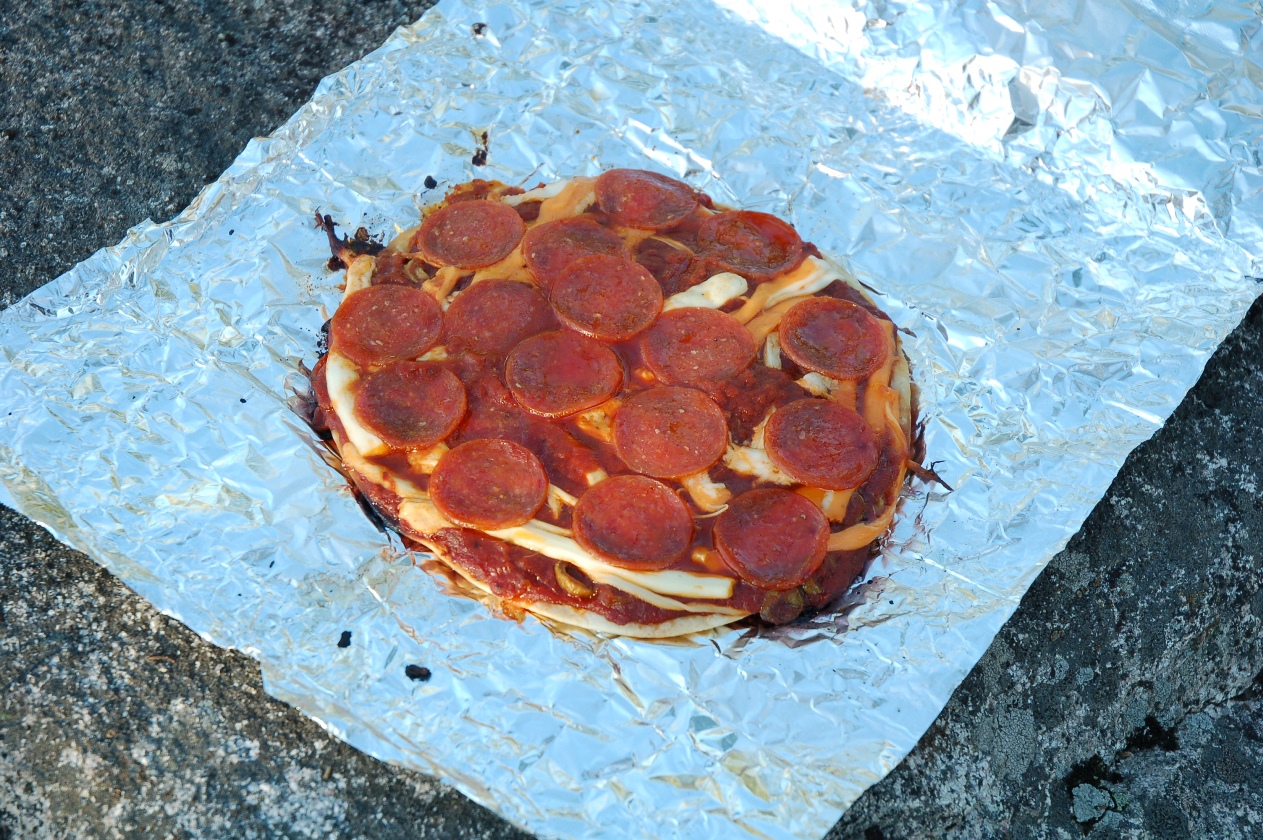 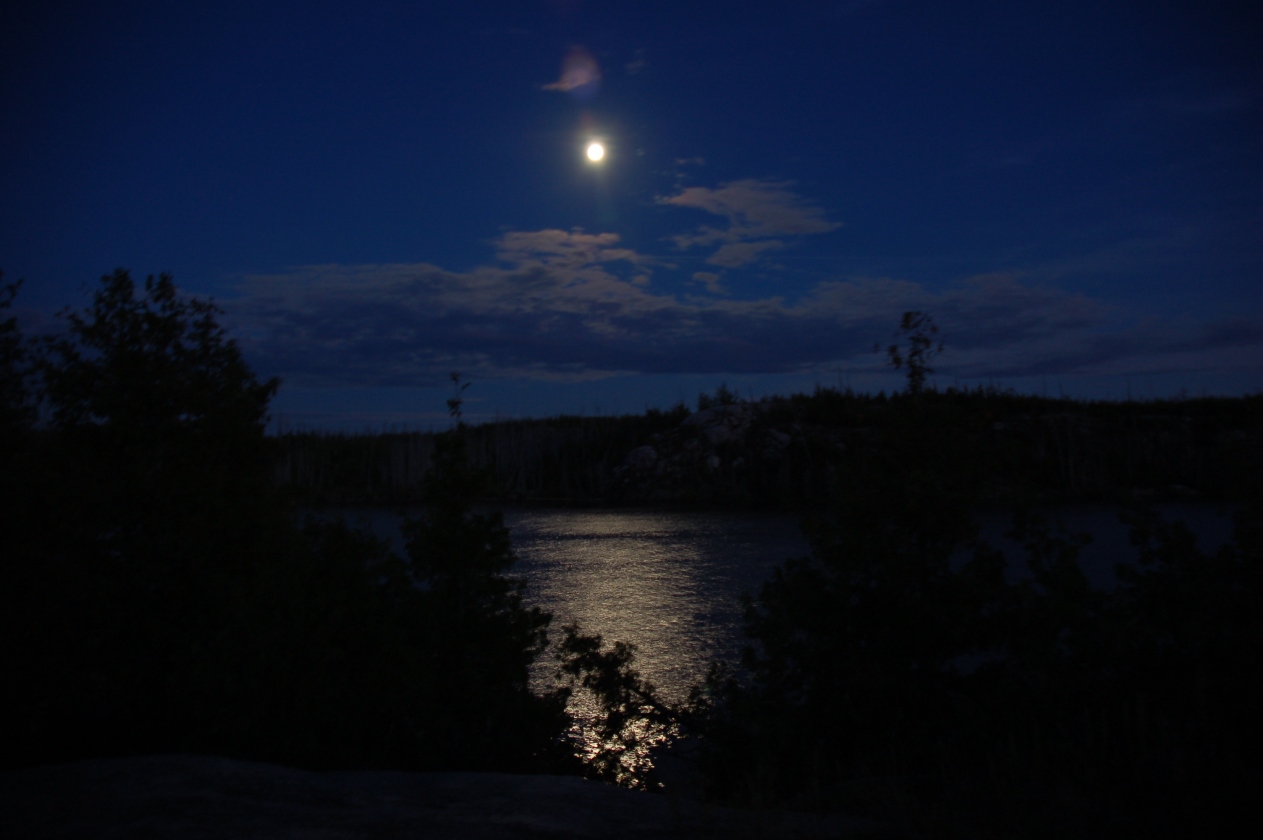