The historic pictograph route
by TuscaroraBorealis

Trip Type: Paddling Canoe
Entry Date: 09/27/2014
Entry Point: South Hegman Lake (EP 77)
Exit Point: Wood Lake (EP 26)
Number of Days: 8
Group Size: 2
Trip Introduction:
For our annual fall trip, a course was charted through some very popular areas with hopes that traveling during the shoulder season would provide a reprieve from the usual “crowds” that would normally be found throughout much of our planned route.
Discuss Trip: View Discussion Thread (13 messages)
Day 1 of 8
Saturday, September 27, 2014

Finding our bunkhouse last night proved to be a bit confusing. Still, we incurred no major setbacks, sitting out and enjoying the wondrous Milky Way & star filled sky before turning in for a good night sleep.

A quick hearty breakfast & we were off to Spirit of the Wilderness Outfitters to pick up our permit, then shuttle our vehicle to the Wood Lake (EP #26) parking lot. From there, our driver Nick shuttled us to our entry point, South Hegman Lake (EP #77). After unloading, we took a couple of photos beside the kiosk in the parking lot before officially embarking on our adventure.

As expected, the trail was in great shape and easily traversed. The only discernible impediment along the way was the stairway leading down to the shores of South Hegman Lake. Don’t get me wrong, the stairs were preferable to the alternative. It’s just that the steps were built for someone with size 48 feet. It required a step and a half on each stair, which, for me, proved to be an unnatural - uncomfortable stride. Vickie told me my legs were just too long.

It was shaping up to be an absolutely gorgeous day, as temperatures would approach the eighties later in the day. There was a tranquil cooling breeze easing across the lake as we worked our way towards our first portage.

Although the portage into North Hegman Lake wasn’t too much more than a pullover, it provided a scenic backdrop while we quickly accomplished the task. Indeed, we would rate both Hegmans as eye-catching lakes.

For most people, as well as us, the undeniable attraction of North Hegman Lake is the excellent pictographs that are located along the western shore. In fact, they were the major reason why we chose this entry point. Situated in a narrow arm of the lake, we had no difficulties locating these pictographs. We took pause - marveling & reflecting on their possible meaning; wondering who may have created them, and why? 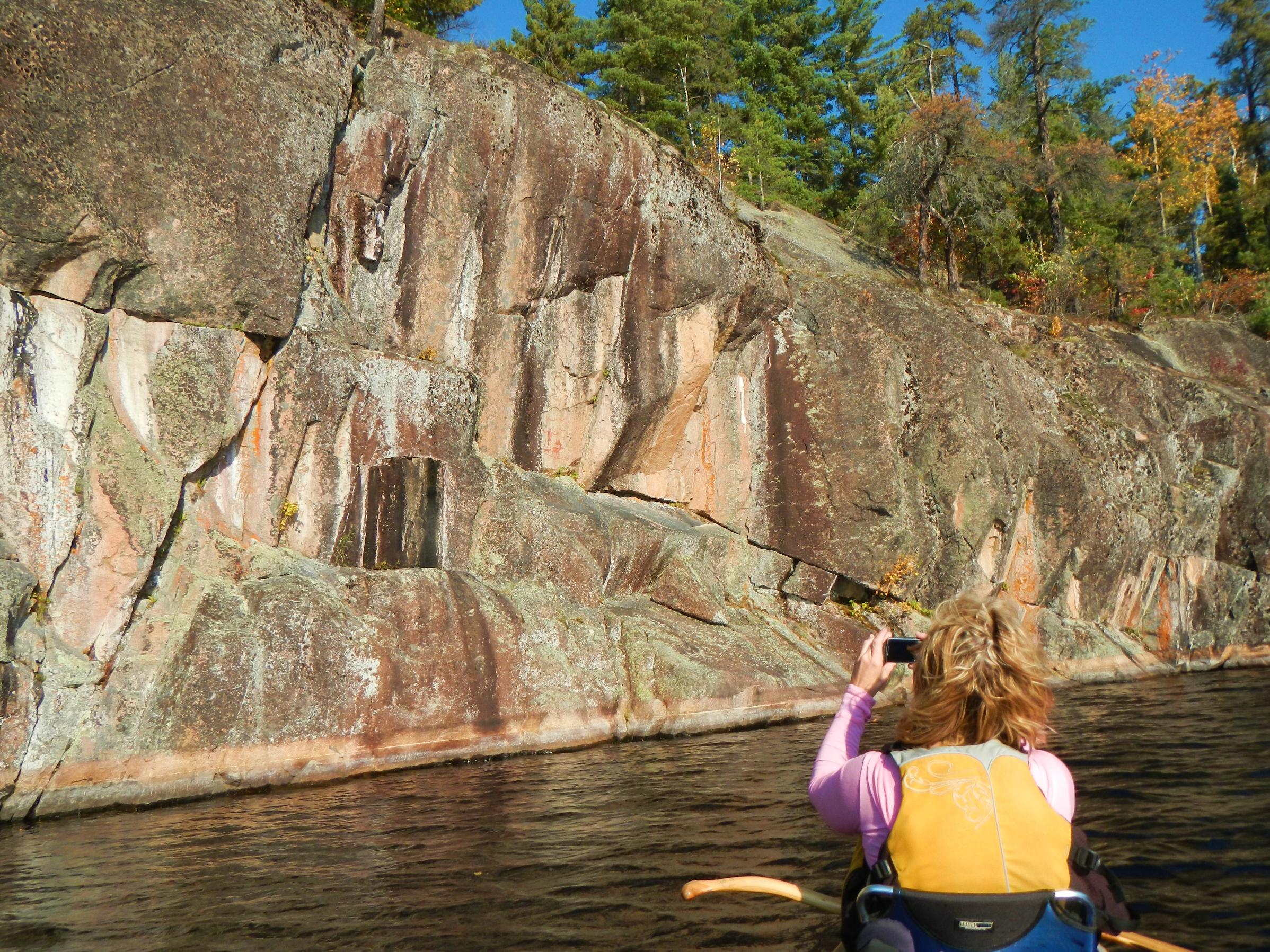 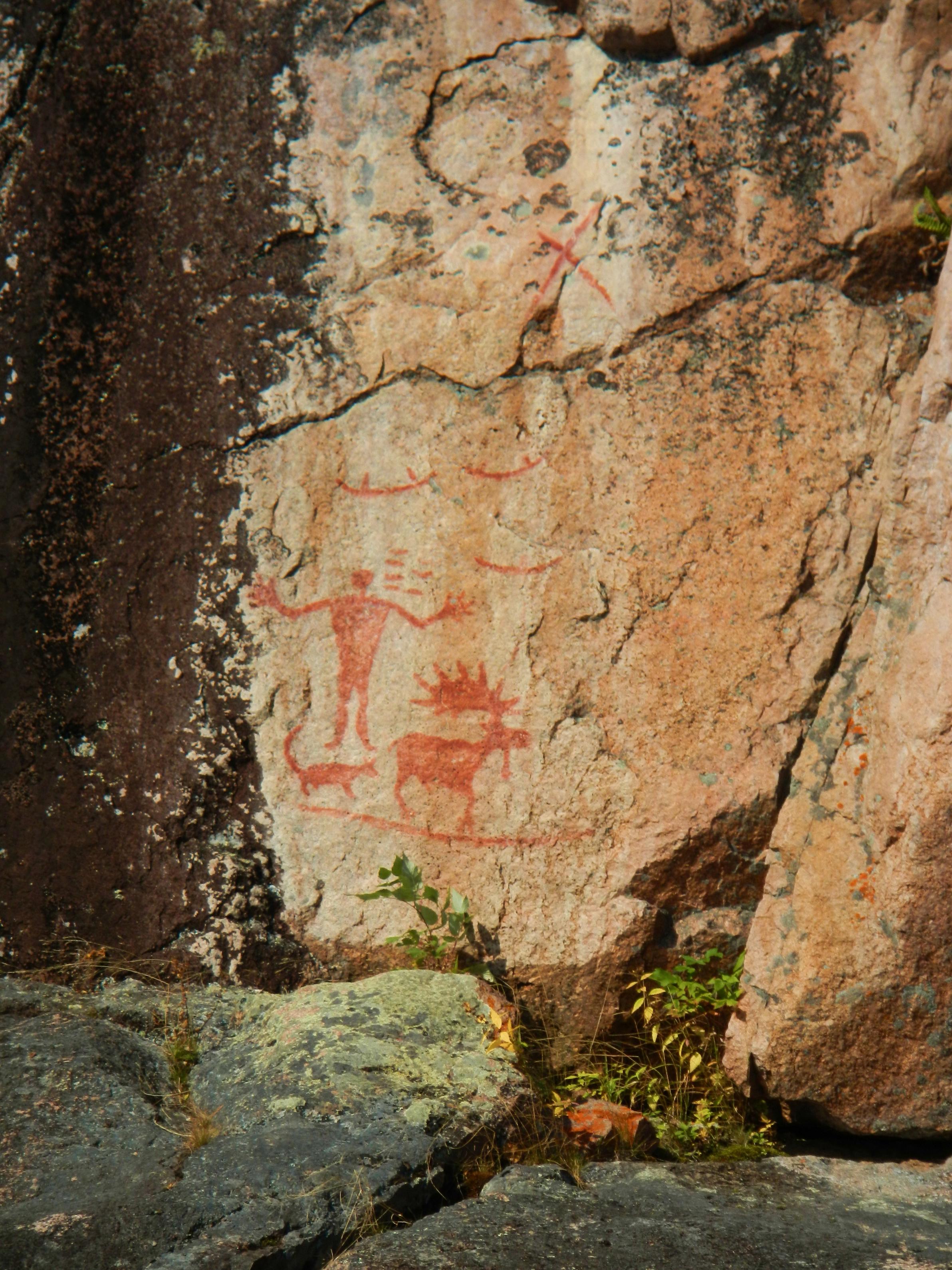 There was an interesting article in The Boundary Waters Journal awhile back. In it, the authors’ theory about these pictographs was that they represented some familiar constellations. I can offer nothing to either, confirm, nor deny the wisdom of that logic, but it is a fascinating explanation.

Soon, the wood was back in the water as we paddled; still fueled by first day adrenaline, up through tiny Trease Lake on to our next portage.

Initially we erroneously pulled up to an alternate landing just west of the actual (more convenient) landing. There was a short trail connecting the two landings. But, once we discovered the error of our ways, we paddled over to the proper landing. We certainly didn’t want to add any more length to this already formidable portage.

Somewhat surprisingly, the trail was well worn & open. I surmised several people hiking the Angleworm loop must also traverse this spur trail to add some variety, thus keeping the trail packed down in the process. For us, our game plan was to leap frog this long portage. About ¼ of the way through, we encountered the foreboding mud hole. Fortunately, for us, it had been relatively dry recently. Still, getting the canoe through this section proved to be incredibly taxing; since it was difficult, if not impossible, (because of the overhanging trees & brush) to skirt the edges where there was significantly better footing. So, while carrying the canoe, I wound up plodding right through the middle of the ankle to calf deep mud. Crossing through this corridor of muck & mire warranted our first ‘pose’.

With a little less spring in our step, we continued on.

Just past what we presumed to be the half way point, returning for my second load, I was TOTALLY flabbergasted to run across a mother & daughter following behind us. They too were doing the portage, and their husband/father was just behind with the canoe. Though I never asked, the scant amount of gear they were carrying clearly indicated to me that either they were just on a day trip, or were the most accomplished, Spartan campers I’ve ever run across.

At first, I must admit, I was a little discouraged by having to share the portage with another group. But, they were an extremely friendly family and inadvertently provided some comic relief; helping to take our minds off the drudgery of the task remaining.

Each time, returning for my other load, when I’d cross paths with them, they’d enthusiastically ask, “Did you see the lake yet?!?” Believe me, I didn’t want to have to let the air out of their balloon, but, reluctantly, I had to say “no” multiple times. However, in a sad twisted way, this recurrent scenario would eventually bring a smile to my face.

Although this was one of the tougher trails I’ve done in the BWCAW, one of the aspects I always enjoy about doing longer portages is the opportunity to see multiple facets of the forest ecology. And, much like most other longer portages, this one didn’t disappoint. As we passed through the varied rolling terrain, most of the deciduous trees were sporting their fall plumage, and the beams of sunlight perpetually penetrating the forest canopy highlighted those displays in spectacular fashion.

Autumn is absolutely my favorite season for canoe country travel for just that reason. While summer travel has its charms, the greens of the plants and trees seem to meld everything together. In fall, there’s more of a sense of individuality in the woods. For example, above and beyond the inherent beauty they exude; the bright red glow of a maple tree, or the golden shimmer of birch leaves make them instantly recognizable – even from across a lake.

By the time we reached the Angleworm trail junction, the family we were sharing the portage with had over taken us. Shortly afterwards, each having taken a different fork, they temporarily became separated. We intermittingly ran across each of them and advised them to return to the junction and just stay put. Happily, they were soon reunited.

Angleworm is a lake that requires substantially more work to get to than virtually any other BWCAW entry point. Consequently, the logical perception would be that people would shy away for just that reason. Well…..today wasn’t one of those days. Besides the family we shared the portage with, there were no less than 3 other separate hiking groups on the Angleworm Trail. And, those were just the ones that we seen! Undoubtedly people were taking full advantage of the beautiful weekend weather.

Exhausted, we put in on Angleworm Lake shortly after the family & continued our journey northwards, hoping that a greater sense of solitude would be achieved.

Perhaps biased by the effort it took to get here, both of us agreed Angleworm was an exceptionally scenic lake. All along the lake were conifer capped cliffs with knobby granite precipices & fingers running down to the water. At one time there was a fire tower, sawmill, and even an old railroad line running to this lake. It would’ve been fun to check out what was left of those old spots, but we needed to keep paddling on. 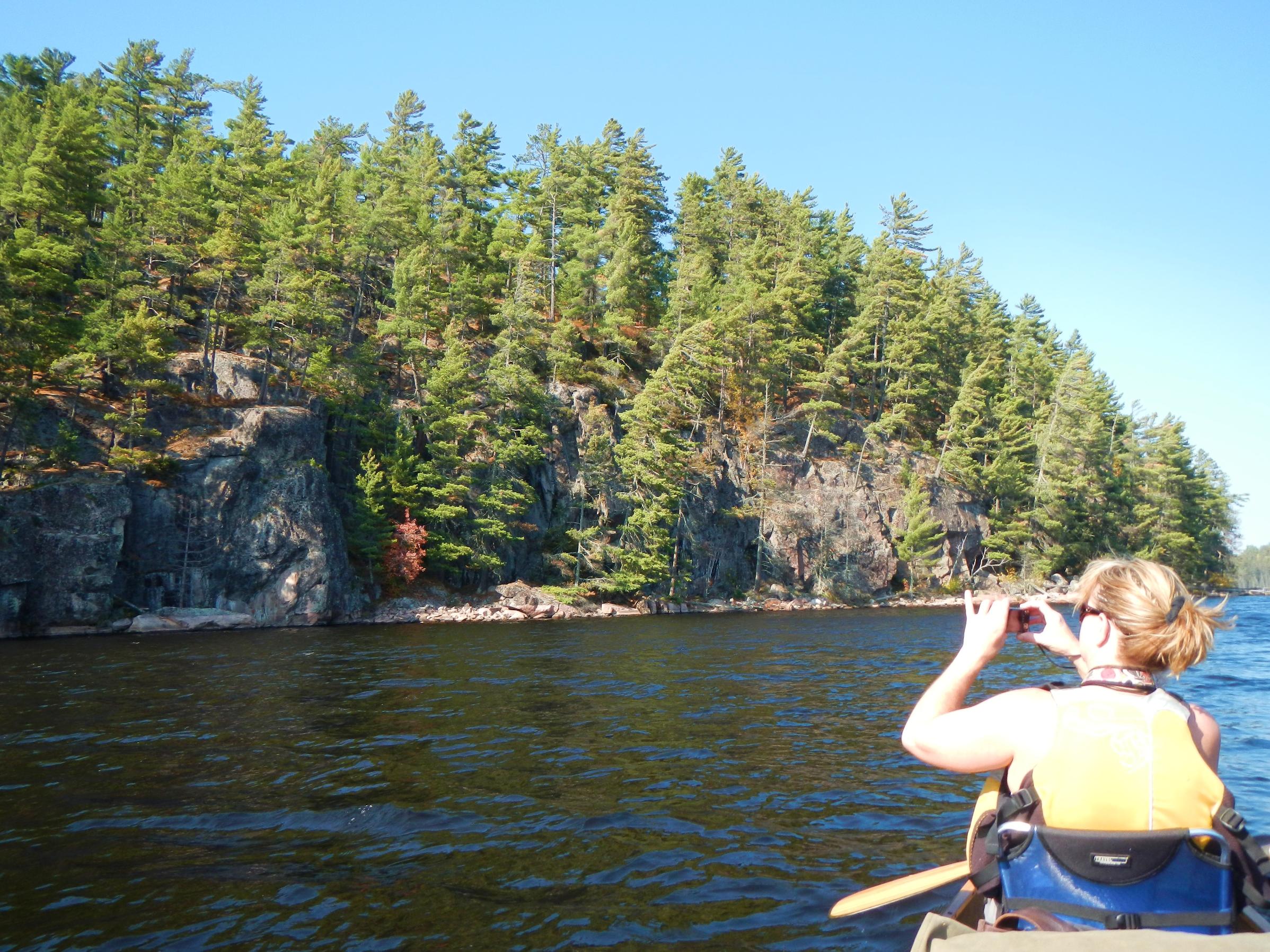 Angleworm Lake eventually morphs into more of a river-esque paddle on the north end. In slightly higher water, I believe we would’ve been able to paddle through the first beaver dam & rocks we encountered. As it was, we had to take the short portage (5 rods??).

A quick snack break & we were back on the water, but not for long. Here we came to the portage into Home Lake. It starts, at the base of a long standing beaver dam, with a short climb & some minor twists and turns before eventually straightening out and dropping us on Home Lake. Looking back, it may have been wiser to just do this whole section in one long portage. 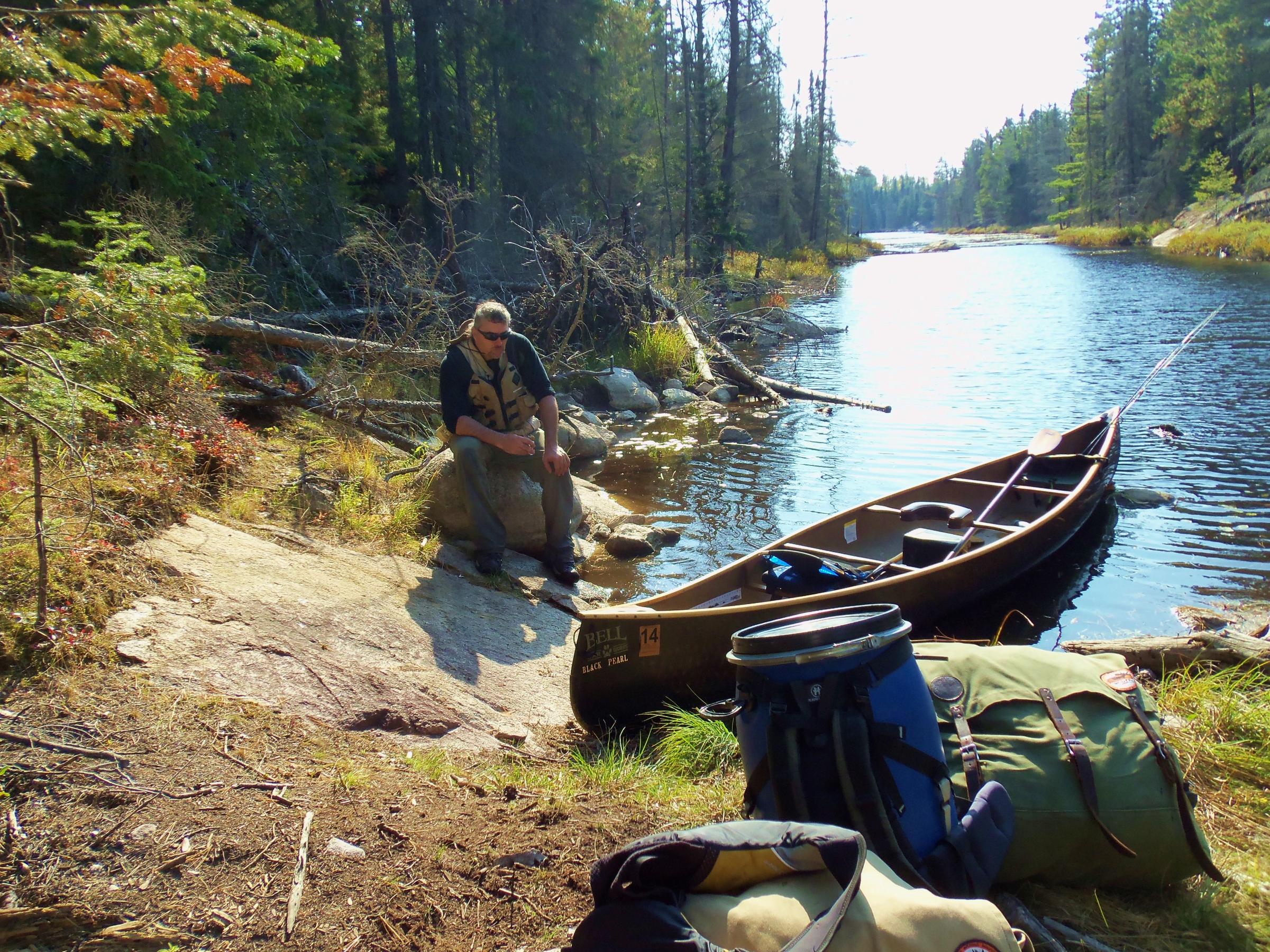 From a distance, the eastern campsite on Home Lake (which was open) looked attractive and quite enticing as we wearily paddled by. Though both of us were tired, a unanimous decision was made to push on to Gull Lake as planned.

It was getting late…. The hiking trail intersection added some temporary confusion but, we managed to get everything across without serious incident or delay. For a ¾ mile portage, I thought this one was relatively decent. As I recall, only one rocky, gradual downhill (going towards Gull) section that even warrants mentioning. Considering how long a day it’d been for us already, I’d say that equates this portage to a walk in the park.

We lingered on the granite knob at the Gull Lake landing to collectively catch our breath; and, since there wasn’t going to be much daylight left once we got to camp, establish the immediate game plan for when we landed. By the way, this landing wasn’t the most user friendly!

When we pulled into camp, the sun was just dropping over the horizon. Captain William Clark’s famous quote; “O! The joy!” succinctly summed up our collective sentiment. 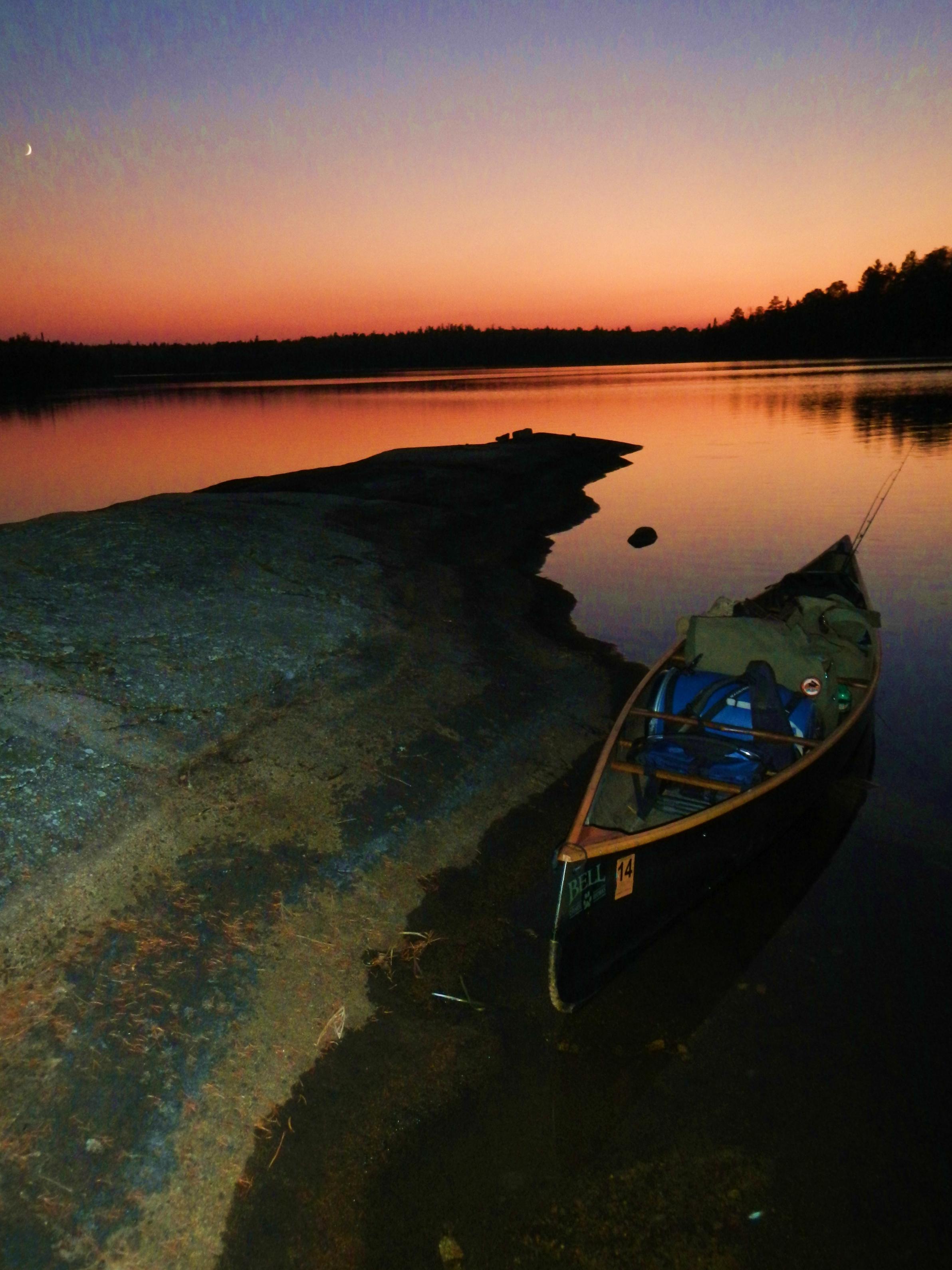 Both of us were completely whipped! Originally we had planned to have fresh pork chops for supper. Fortunately they were still frozen solid, and besides, I was in no mood to search for firewood, much less process it and get a proper cooking fire going. So, Vickie set about making some Alfredo noodles & foil pouch chicken (the quickest pot to plate meal we had along) while I got the tent & our sleeping bags/pads setup.

We ate our lantern light supper under a dazzling star filled sky. With no bugs out, we stayed up a short while reveling in the days adventures, equally proud as thankful in our accomplishment of having reached Gull Lake today. I would’ve thought if sleep was ever going to come easy, this would be the night. Ironically, we both complained how hot & humid it was in the tent. While we enjoyed the unseasonably warm weather of the day, it took awhile for it to cool down inside our Hilleberg tent. But, in the end, we both succumbed into a well deserved deep sleep without too much tossing & turning.