Lake One to Alice - 4 days of sunshine
by muddyfeet

Trip Type: Paddling Canoe
Entry Date: 06/15/2015
Entry & Exit Point: Lake One (EP 30)
Number of Days: 4
Group Size: 4
Trip Introduction:
Four friends left the kids behind to enjoy adventure, fishing, food, and sore muscles in the wilderness.
Discuss Trip: View Discussion Thread (9 messages)
Day 1 of 4
Monday, June 15, 2015 My wife picked up her mother at the airport (who had agreed to watch our young children) and we enjoyed a dinner and some last-minute packing before leaving home in the rain Sunday night. We drove straight to EP30 and slept in the car from 1am-5am. Our friends had spent the night in Ely and met us at 5am. None of us had been to this entry before. Breakfast was juice and doughnuts and as we loaded the canoes we could hear the howling of wolves seemingly welcoming us to the wilderness. They sounded close. We pushed off into Lake One and took the north channel past Kawashiwi lodge. The early mist was beautiful with the rising sun, but it did make navigating the meandering channels of Lake One a little difficult. 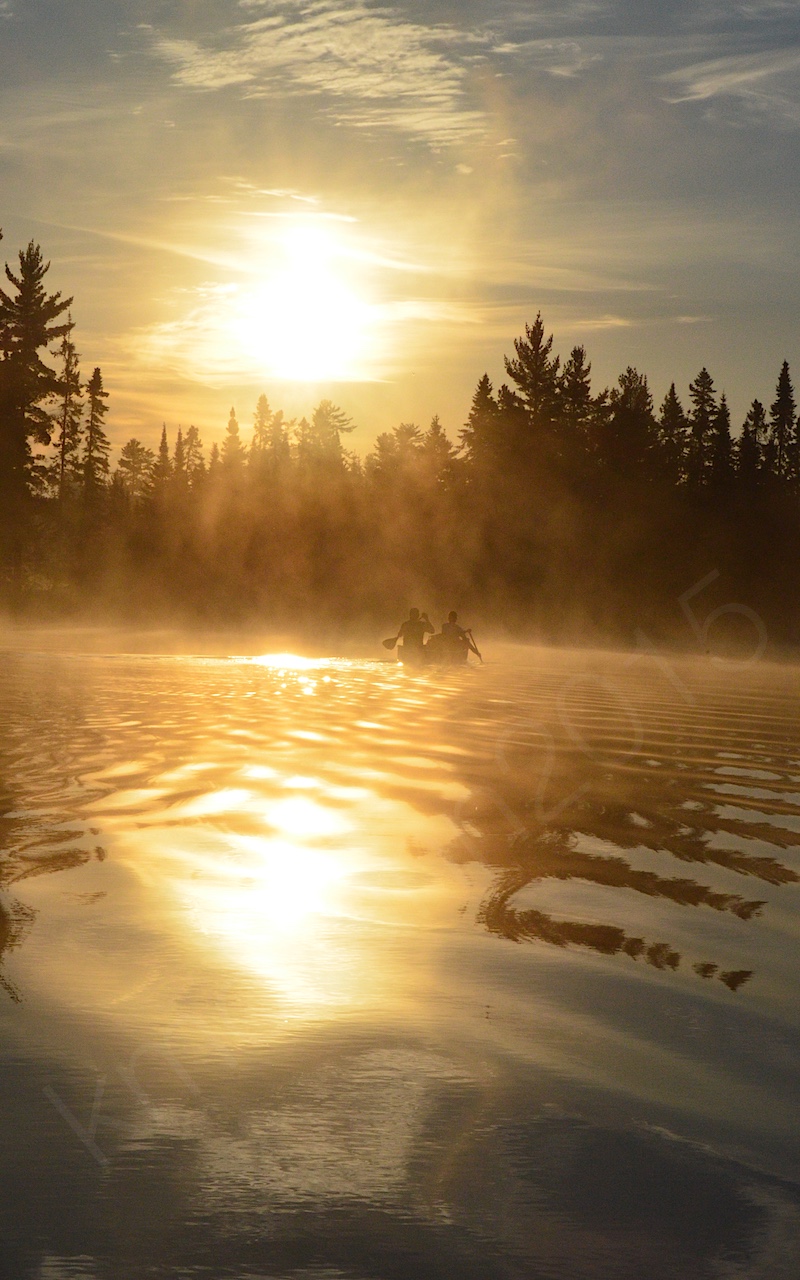 Two quick portages into Lake two and I realized that I no longer had my map. It was in the mesh pocket of my seat during the portages in a clear case and it simply wasn’t there upon entering Lake Two. I went back to check all the portage landings and there was no sign of it. I still have no idea where it went. It was a good thing the other canoe had a set of maps as well, and I am reminded to next time print some copies to stash in the bottom of my pack. I am not a fisherman by any means and have never really enjoyed fishing, but had decided I was excited to fish the boundry waters on this trip, and read a bunch of the fishing forum here before we left to guide me in what gear to bring, etc. I had clamped a rod holder on the thwart to troll with and it worked extremely well. I trolled a large spoon on Lake One, but with no hits I suspect it never got deep enough. (again, not really sure what I was doing). On lake Two I swapped it out for an original J-19 rappala (4-14’ depth) in black and gold; and with the 15lb braided line, the rod tip gave a nice visual indicator of a the swimming action as we paddled. I’m not sure if it was luck, but this proved to be the winning lure of the whole trip. Right away I caught a little hammer handle pike and a very ambitious little 9” walleye. On Lake Three there was a fast hit from a monster fish that fought its way of the hook before I could get it in. This was easy: it was just trolling as we paddled! The hardest part was that the other canoe would have to wait for us every time I reeled in a fish., but I was having fun and was no longer mad at myself for losing the map.

The portages were all well-traveled and easy to find, but we had a mishap on one of the short portages from Lake Four into Hudson. These were along the shore to avoid the rapids of the kawashiwi as it flowed from Husdon to Lake Four. At the end of the portage there was a good landing for boats, but we weren’t sure if it was the end or not as it was clear you would have to paddle upstream through a little rapid of faster water. There might have been an additional section to the trail leading around it, but it didn’t look good enough to explore further, and we didn’t bother. My wife and I went first and paddled hard and topped the riffle without a problem; there really weren’t any rocks to navigate around. We are experienced enough to know the difference that a carbon paddle can make in a day’s fatigue and were all using Wenonah blacklight’s. The canoe behind us came up next and right after topping the fast water the stern paddler cracked the paddle blade during a stroke. The canoe started moving backwards for a second heading back down river, but he quickly freed the spare paddle and stayed in safe water. The paddle broke across one side of the blade only, about 3 inches below where the blade meets the shaft. The other side was intact and there were no rock chips or other damage evident: I think it was just a hard dig and a weak spot in the composite layup. Lesson Two: when swinging carbon, every canoe should have their own spare paddle- we had three days left with no other spares, and if it were my paddle that broke, my spare-less canoe would have probably floated backwards down into the rapids. (two days later we met some boyscouts who were complaining about all the mud on that particular portage….that we didn’t know was there because we had unintentionally skipped it[and broken a paddle]). On Husdon Lake we had a little bit of a wind chop, and got blown off course quite a bit when I landed a big bike. Well, bigger than any fish I’d ever caught before. Our canoe was 31 inches across at the beam and the fish had that beat by a little. I had brought a small trout net but never used it: The best landing tools ended up being a needle-nose pliers to remove the hook and a glove to grip the fish and keep the slime off of your hand. 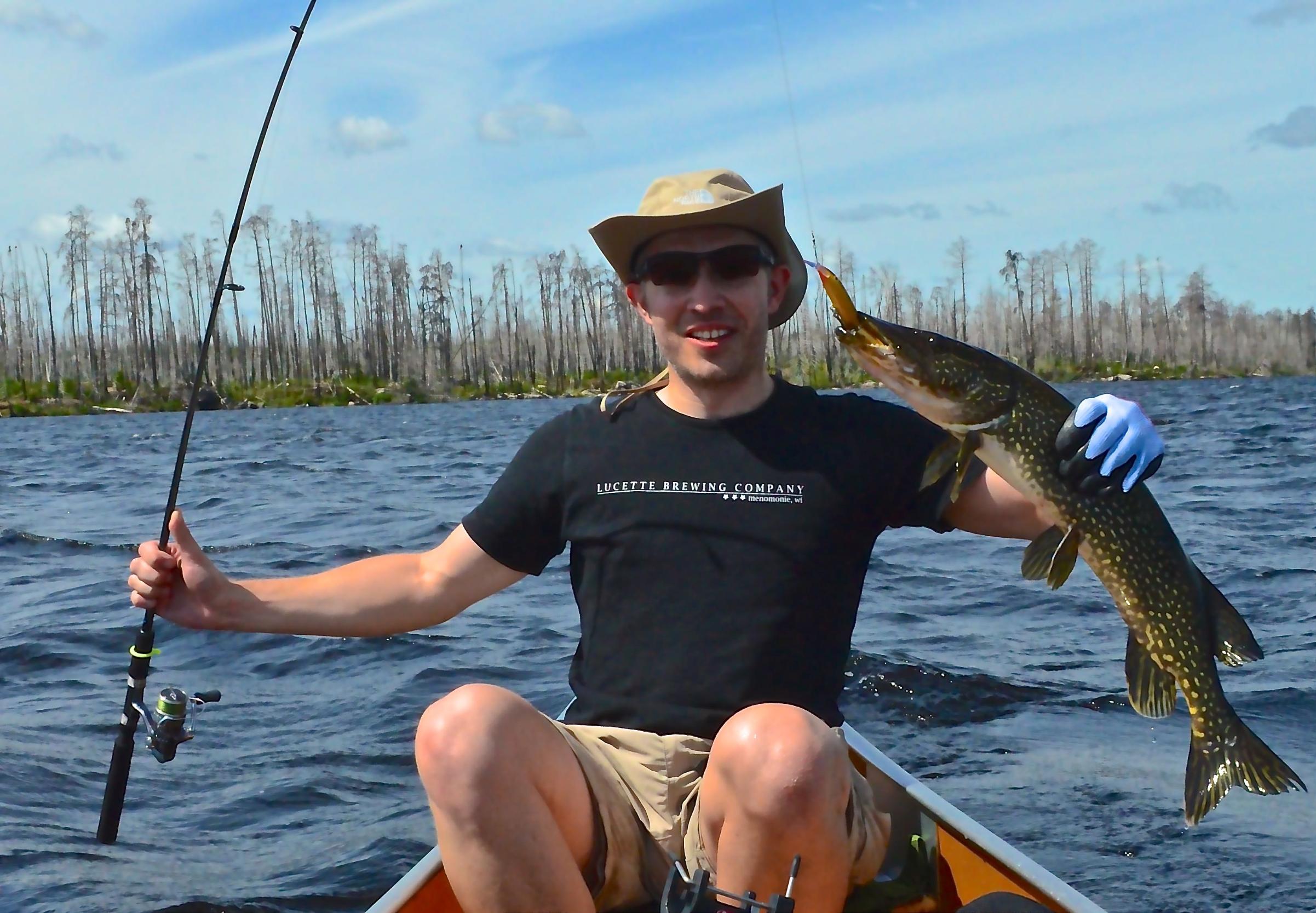 The 105rd from Hudson to Insula was a little bit of a climb, but it was a pretty hike- along the river canyon. I can only imagine what it was like before the burn- or what it might be in 100 years. Insula was a tricky navigation, with all the islands and long skinny bays. The wind was with us for most of the lake until we got up out of the burn area into the northern end where we started fighting a tough headwind coming from the bigger parts of the lake. If you have ever wondered what “The Rock” is that is marked on all the maps of Insula, it is…well…a rock. It serves as a good landmark, but there’s nothing really special about it. You get a bunch of sean connery/ Nicholas cage and Dwayne Johnson jokes, but it’s otherwise unremarkable from any other rock in the BWCA. We were all tired from a long day and ended up stopping at site #1335 on the eastern shore at about 1:30pm. After a good 14 miles of paddling, It was quickly decided that this was home for the night. Hammocks were out and we were napping in the breeze soon after arriving. It was hard to fish from shore as we had an offshore wind coming at us about all afternoon. Dinner was steaks and mashed potatoes and grilled asparagus and cabernet. The wilderness feast is a good reason for picking a First-day route with little portaging! The wind settled overnight and we stayed up late enjoying company of good friends around the campfire, with a little good whiskey as an after-dinner digestif. 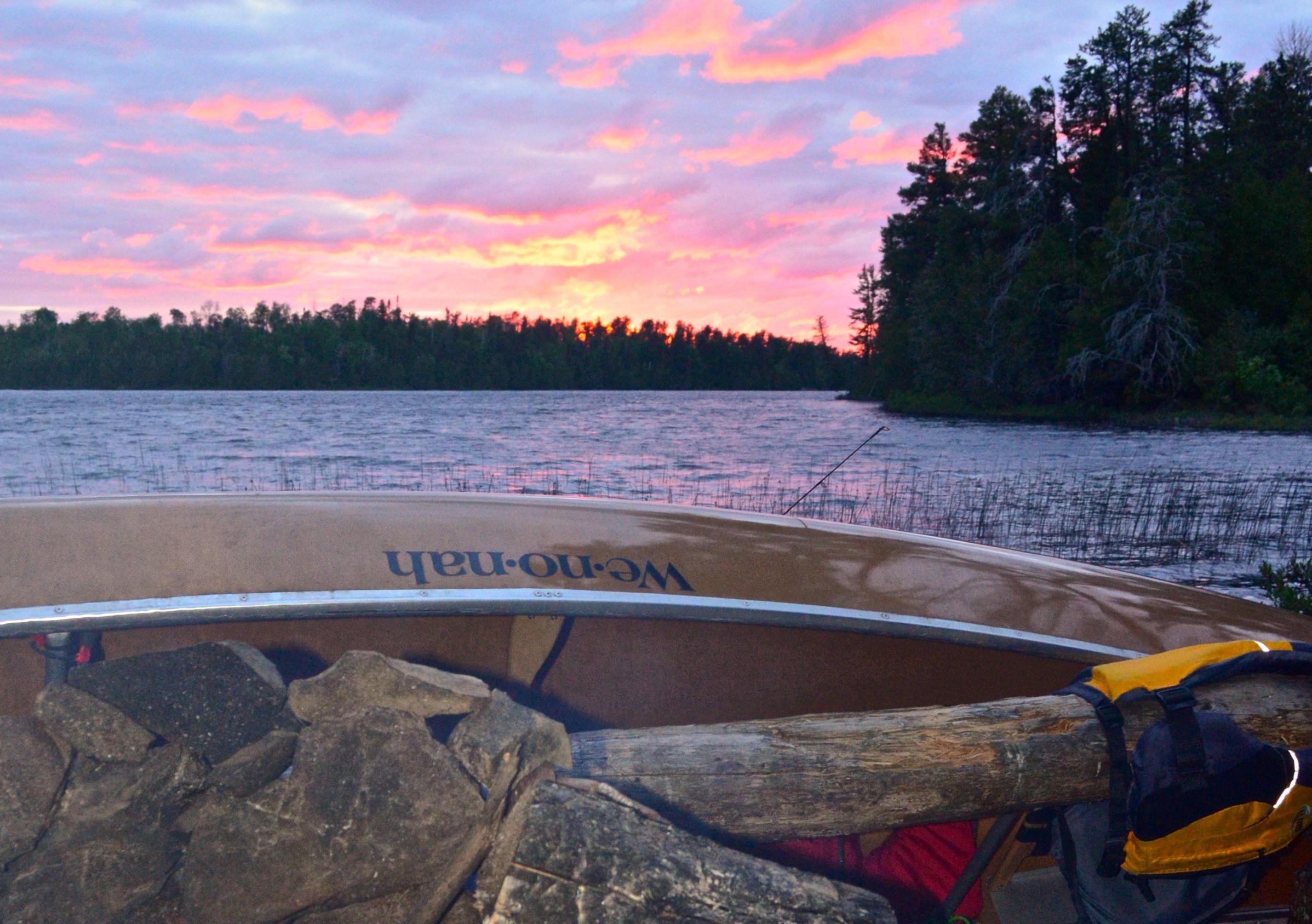