Trip Type: Paddling Canoe
Entry Date: 09/21/2015
Entry & Exit Point: Crab Lake and Cummings from Burntside Lake (EP 4)
Number of Days: 8
Group Size: 3
Trip Introduction:
Our annual fall trip would take us to the little disconnected (from the rest of the BWCA) block of lakes just NE of Lake Vermilion. We had penetrated this area via EP #8 Moose River south on a September trip 4 years prior, and the lingering vivid memories of that short adventure served to fuel our desire to return for a more comprehensive visit. This time we would enter/exit at Crab Lake EP #4 and traverse across many of the long portages this area is known for. Fall is both (my wife) Vickie & my favorite season for canoe country travel. Consequently, the past couple of years we had been reserving our fall trips for just us; leaving our daughter Aurora behind with relatives while we enjoyed the splendor of autumn sans parental responsibility. Now being 4 years old, she has really grown leaps and bounds in her appreciation and understanding of the various aspects of canoe camping, and witnessing her unspeakable joy when totally immersing herself in this environment on our trips earlier in the year compelled us to bring her along on this one as well.
Discuss Trip: View Discussion Thread (10 messages)
Day 1 of 8
Monday, September 21, 2015

Having spent the previous afternoon in Ely, (besides enjoying a leisurely day), we took the necessary steps to ensure an early departure today. Spirit of the Wilderness outfitters would be towing us across beautiful Burntside Lake this morning and they already had our canoe loaded and ready to travel, so it was just a matter of eating a quick breakfast before departure.

Only a modest ripple broke across the watery surface of Burntside Lake on this sunny, though cool, morning. Of course, when planning a trip, a person never knows what Mother Nature will dish up; and since we were hopeful of reaching Cummings Lake today, the tow had seemed a prudent option regardless of paddling conditions.

A spacious landing greeted us as we pulled ashore ready to embark on our 8 day adventure. We would soon discover that this mile long portage could be broken down into 3 stages. The first section was the most technically challenging leg of the trail, being rocky and occasionally undulating until it reached the swampy mid-section where a couple of diminutive bridges aided in the traverse. Finally the trail opened up (minus the mud & rocks of the previous sections) and straightened out over an elongated gradual climb before concluding at a luxurious sandy beach. 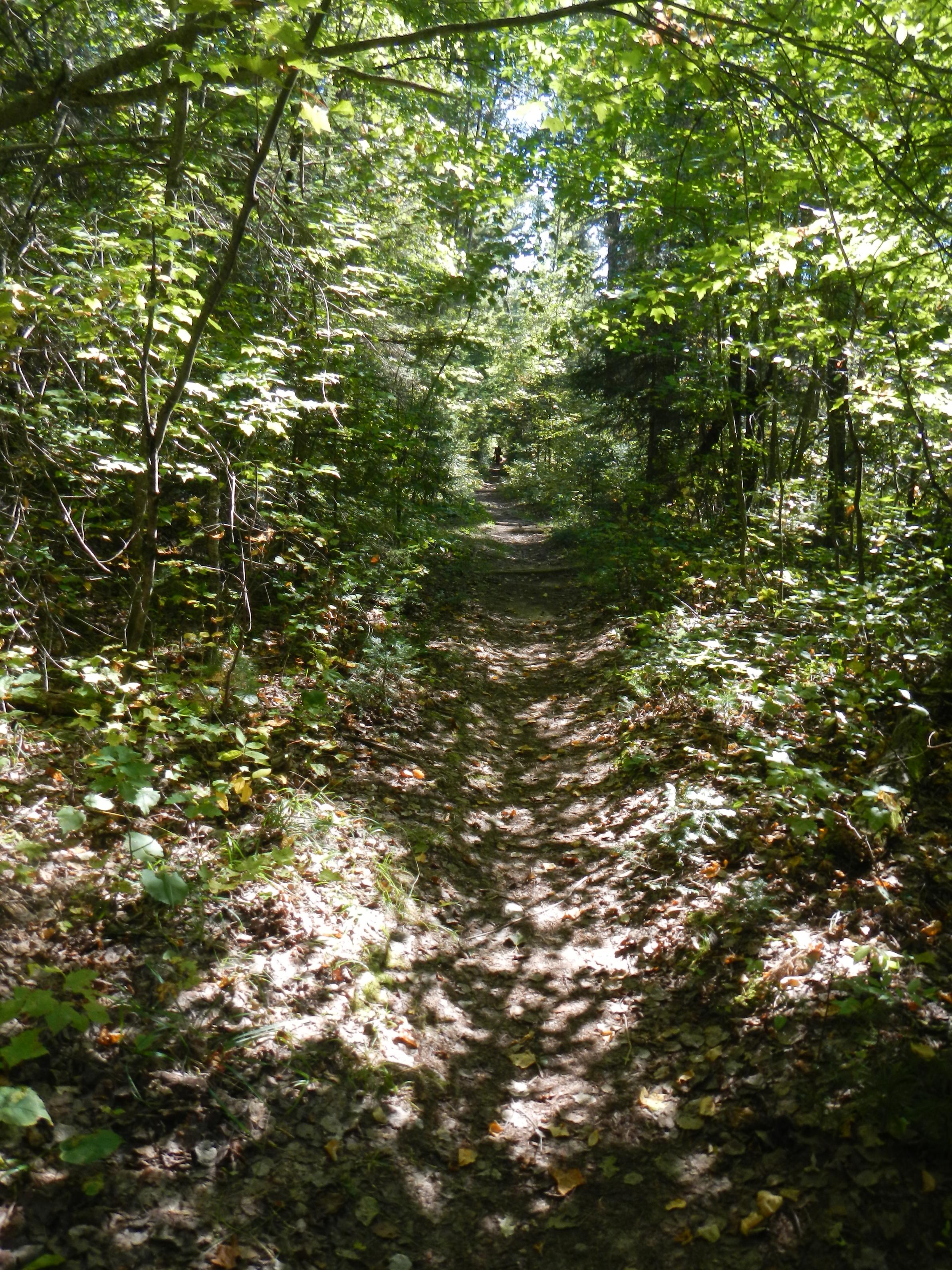 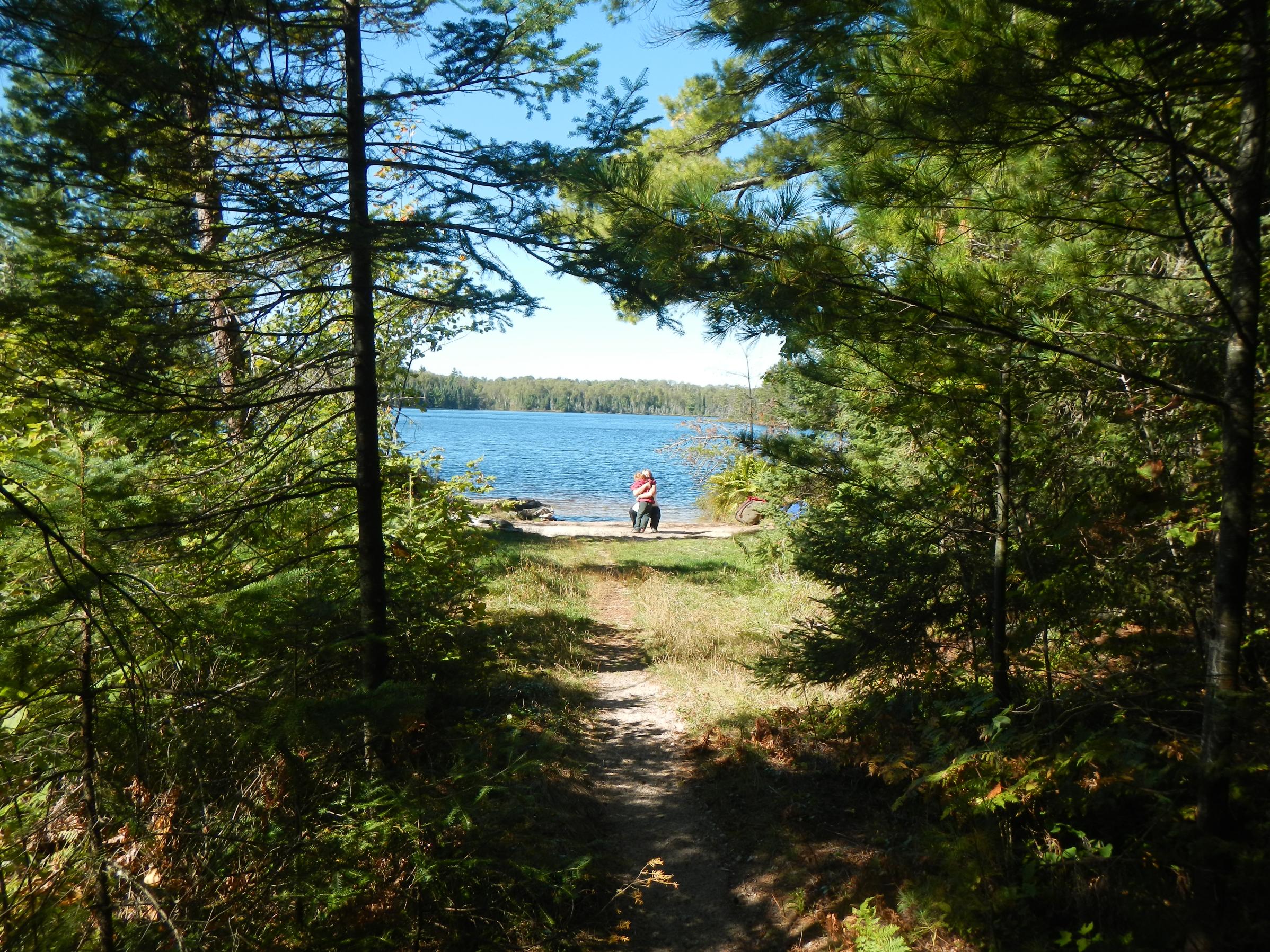 Crab Lake proved to be slightly confusing but, in spite of the ever escalating waves washing ashore, we eventually navigated our way to the Little Crab portage. Fortunately Little Crab Lake offered tamer paddling conditions, and we would soon enter the relative sanctuary of the Korb River.

Initially we had planned on taking the 70 rod portage (on the west end of Korb Lake) to Cummings Lake. But, with the way the wind had been wreaking havoc out on Crab Lake, we decided to take the Korb River to the 35 rod portage and trace the eastern shoreline of Cummings up to one of the 5 star sites near the elbow of that sizable lake. Voyager maps indicate a very short portage prior to reaching Korb Lake. But, we were able to paddle without interruption (including no beaver dams) through the entire course of the weedy Korb River.

Of course once we reached Korb Lake the wind had receded. Unconvinced, we stuck to our revised plan. Upon arrival at the 35 rod portage, we find a long standing beaver dam acting as part of the landing. Large troublesome boulders constitute the more permanent portion of this landing. Thankfully the lion's share of the trail is along a reasonably decent path that shoulders the creek to where it washes out into Cummings Lake. 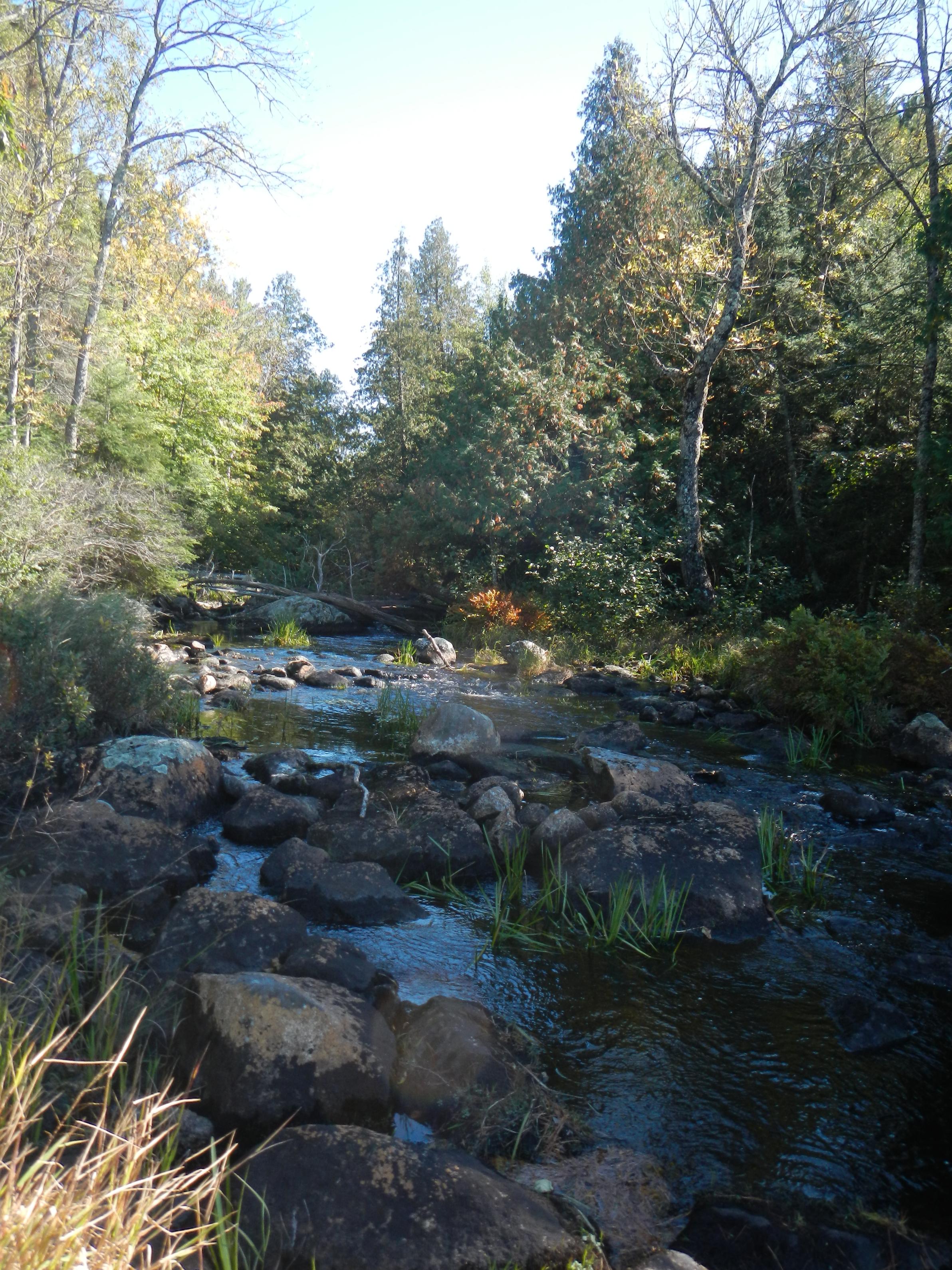 As we push off, conditions are invitingly placid. Working our way northward, a steady escalation of both the wind and waves creates some tenuous paddling circumstances as we approach our hopeful destination. Per usual, our Souris River 18.5 canoe is rock steady and we pull up to a vacant 5 star island abode dry as a bone but, none the less, still appreciative to be off the tumultuous waters.

We had previously visited this site 4 years ago with Aurora when she was just a few months old. So, even though there is also a 5 star site directly east of this island site; for sentimental reasons, we chose this island site as our primary target and we’re grateful it was available. The site was pretty much as we remembered it. An immense kitchen area complete with its own large rock table highlighted this open and expansive site. A bountiful canopy of large red pines offered all the usual trappings associated with such an envious allotment of these campsite sentinels, and there were even a couple of unique trees just outside of camp that provided some diversity. 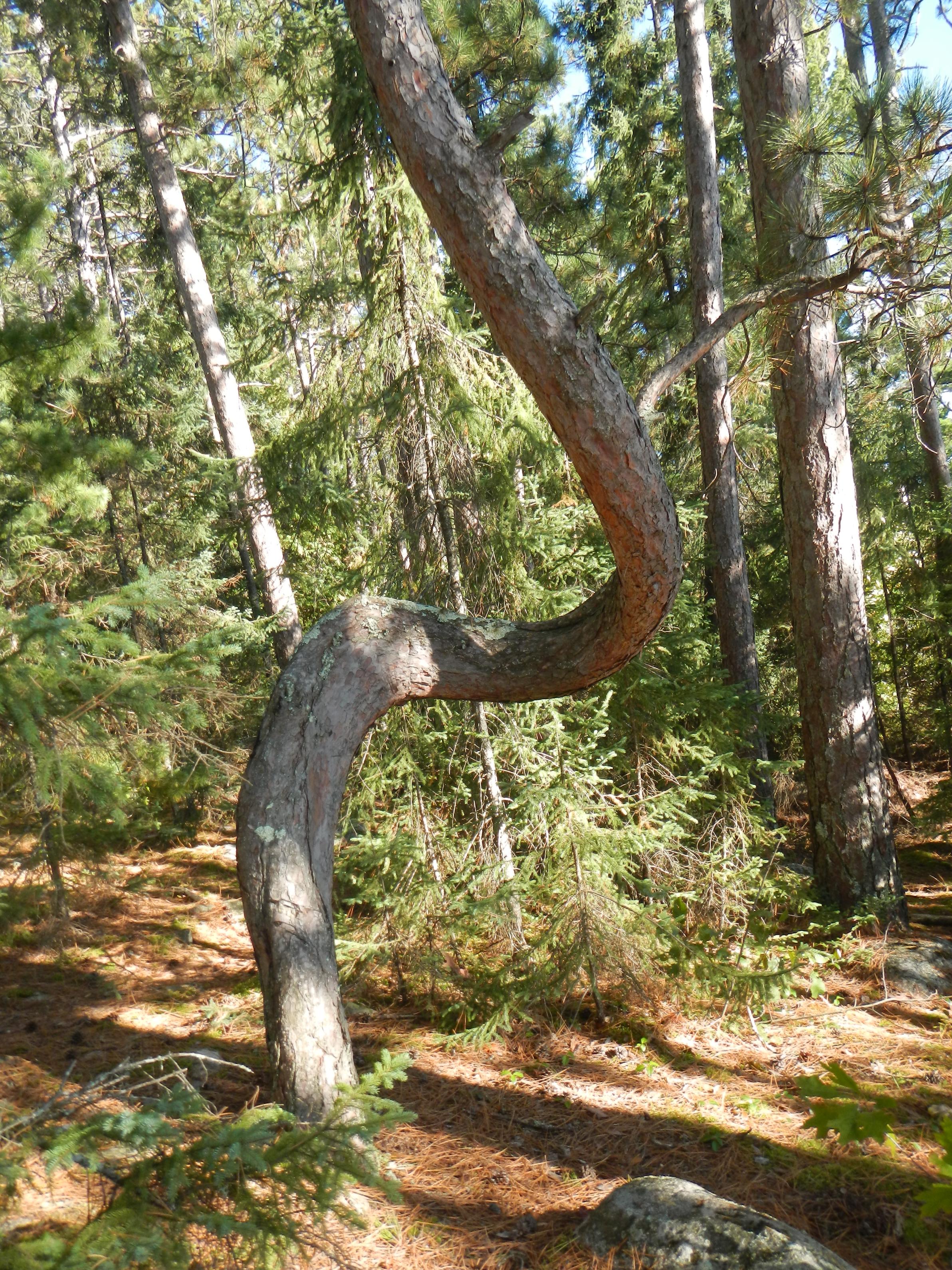 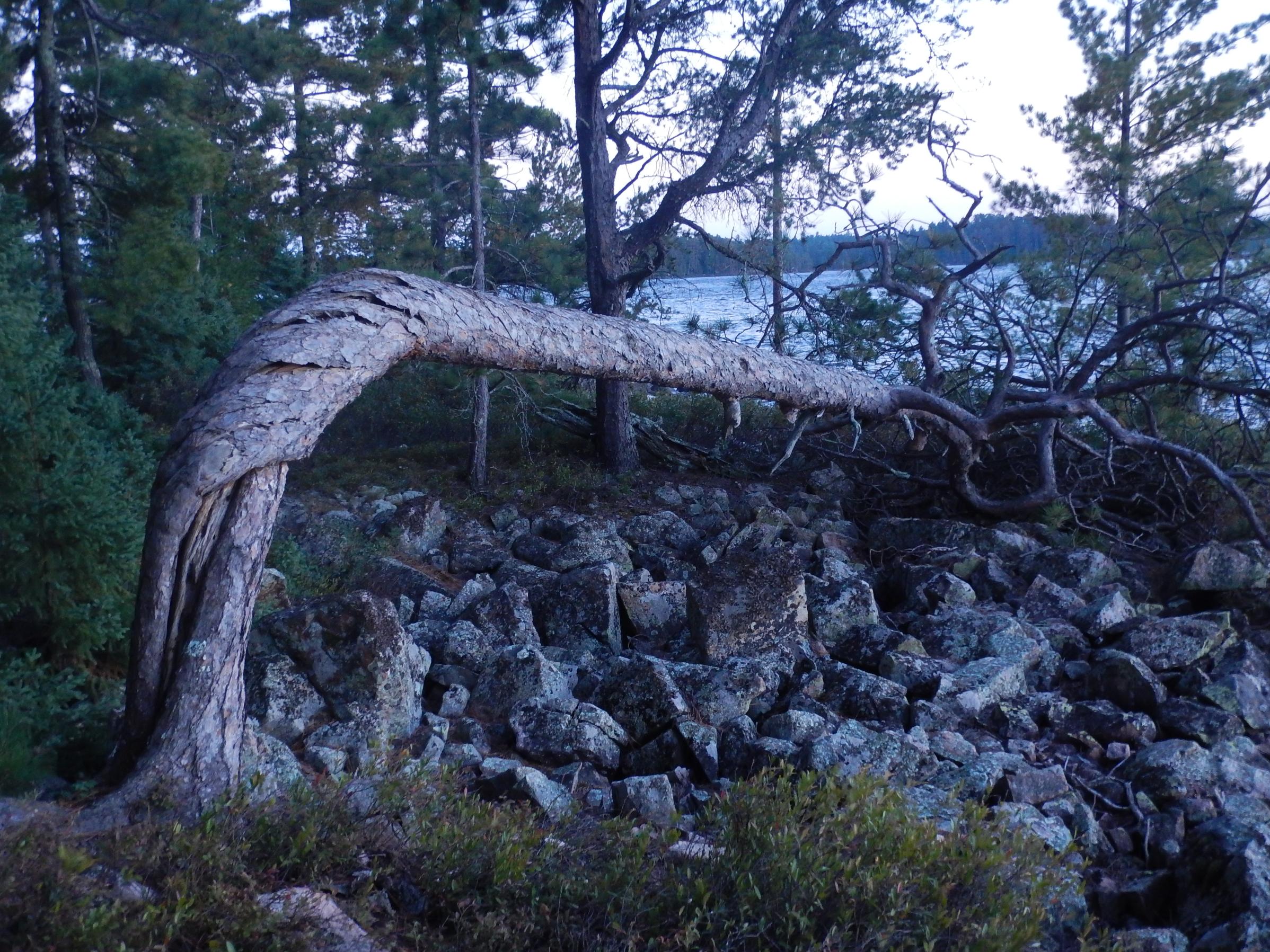 The incessant howling of the intensifying wind served as a raucous backdrop while we got camp setup. Supper was our traditional rib eyes with potatoes. Although, we delectably complimented our usual fare with some green beans from our own garden and some freshly grated asiago cheese melted over both the beans & potatoes.

In her explorations of camp, Aurora found and marveled at various large fungi that were peppered in & around the perimeter of camp. Of course the resident squirrels also provided free entertainment as they busily made their winter preparations. So, even though she brought some toys from home, there were still plenty of natural wonders that kept her mind occupied as well.

The wind persisted well into the evening as we sat ensconced in our red pine sheltered sanctuary enjoying the fruits of our labors and a frosty growler of blueberry blonde from The Boathouse. 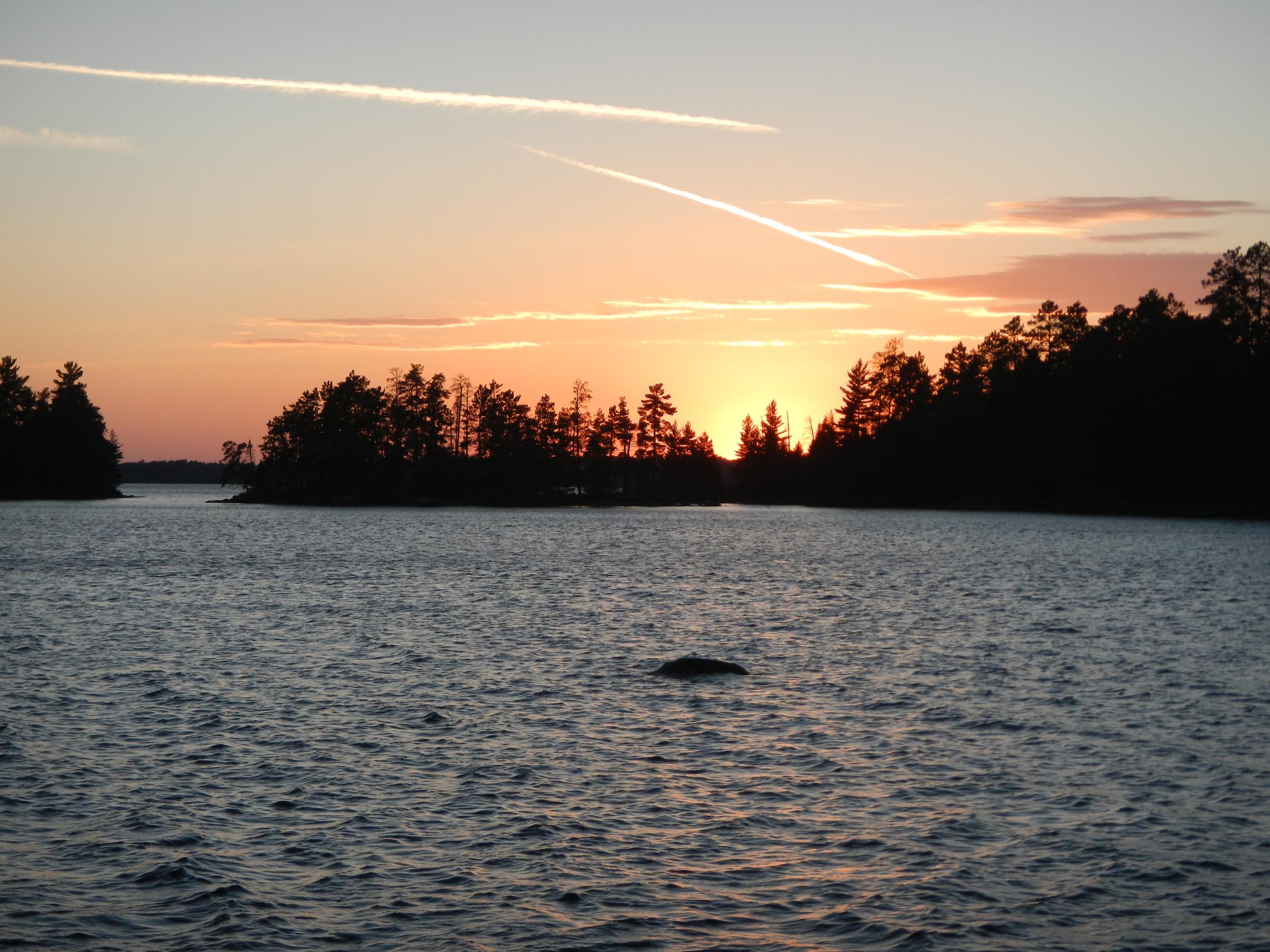