We wake early & do a little packing up before heading over to the Lodge for breakfast. We walk in to the restaurant and are literally the first customers for breakfast. About an hour later we're fed and headed back to the outfitter side of the road to get issued the boat, paddles, and PFDs for Matt & Grace. We decide to get a bait bucket and bring along some leeches, too.

Once we have all our gear portaged to GNO's dock we start loading up the canoes and apply some sunscreen before one last photo of us before leaving civilization behind for the next week. 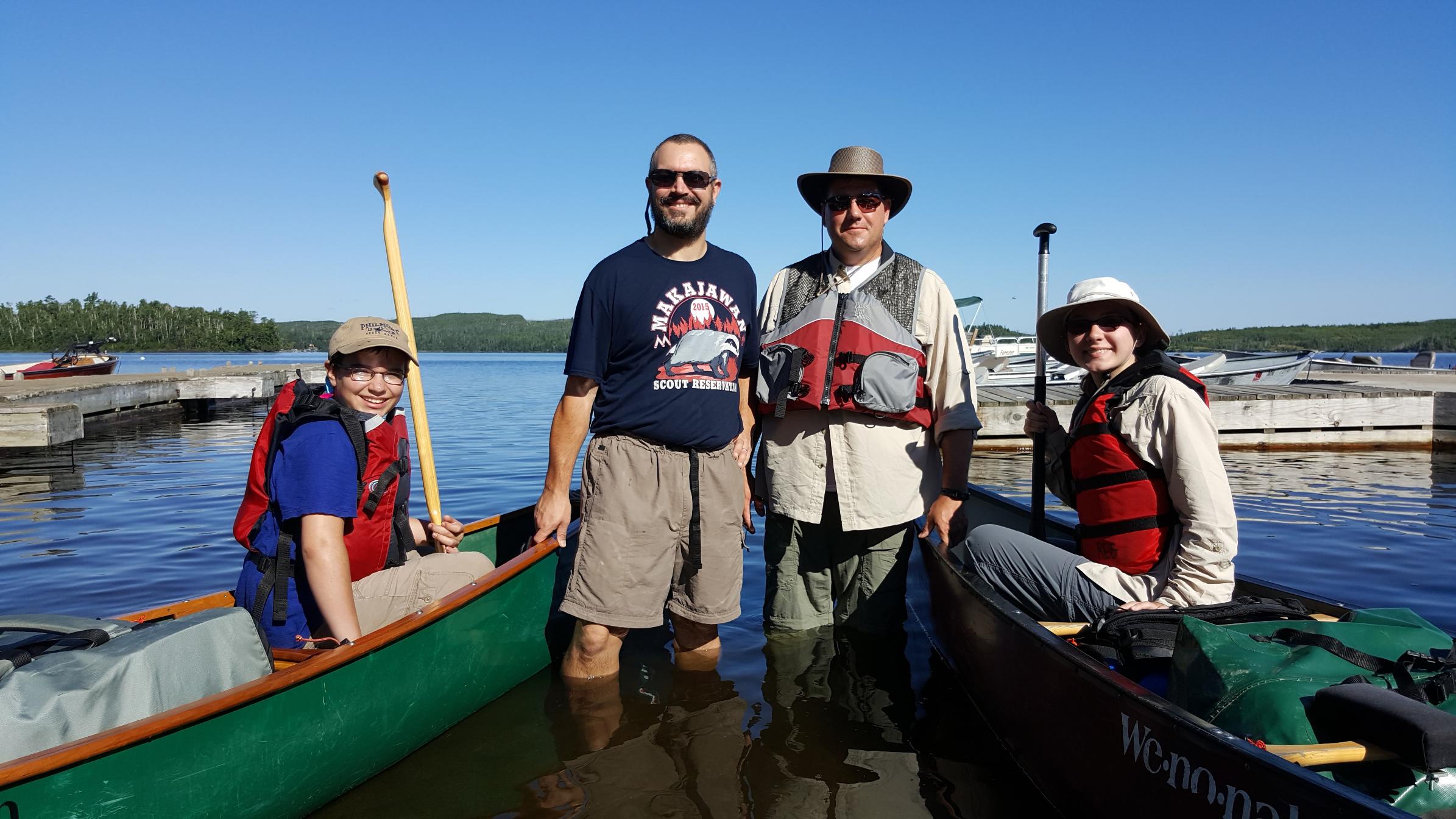 Its sunny & winds are calm, its wonderful to be paddling into canoe country again! Before too long we're across Gunflint & entering Magnetic. 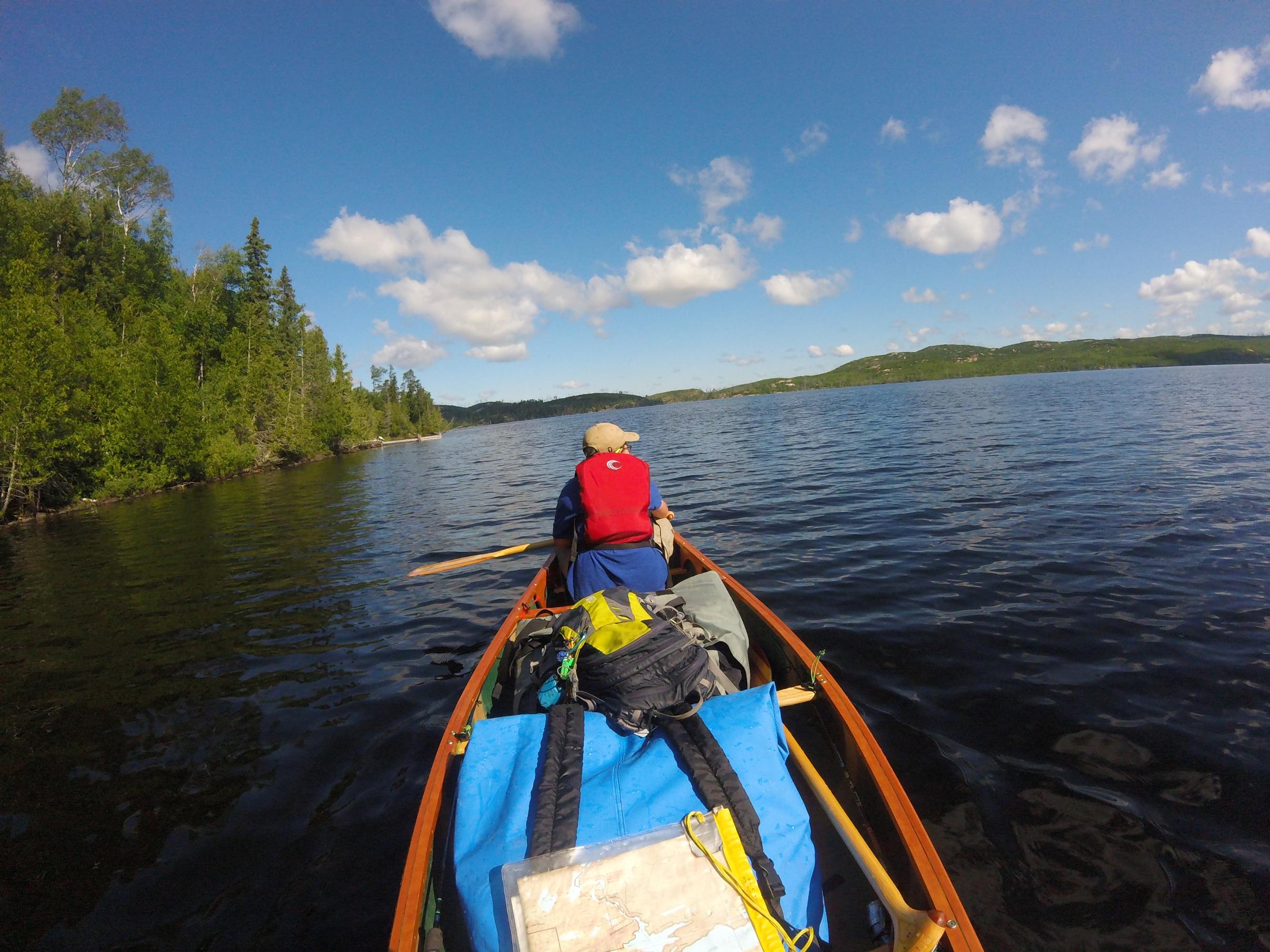 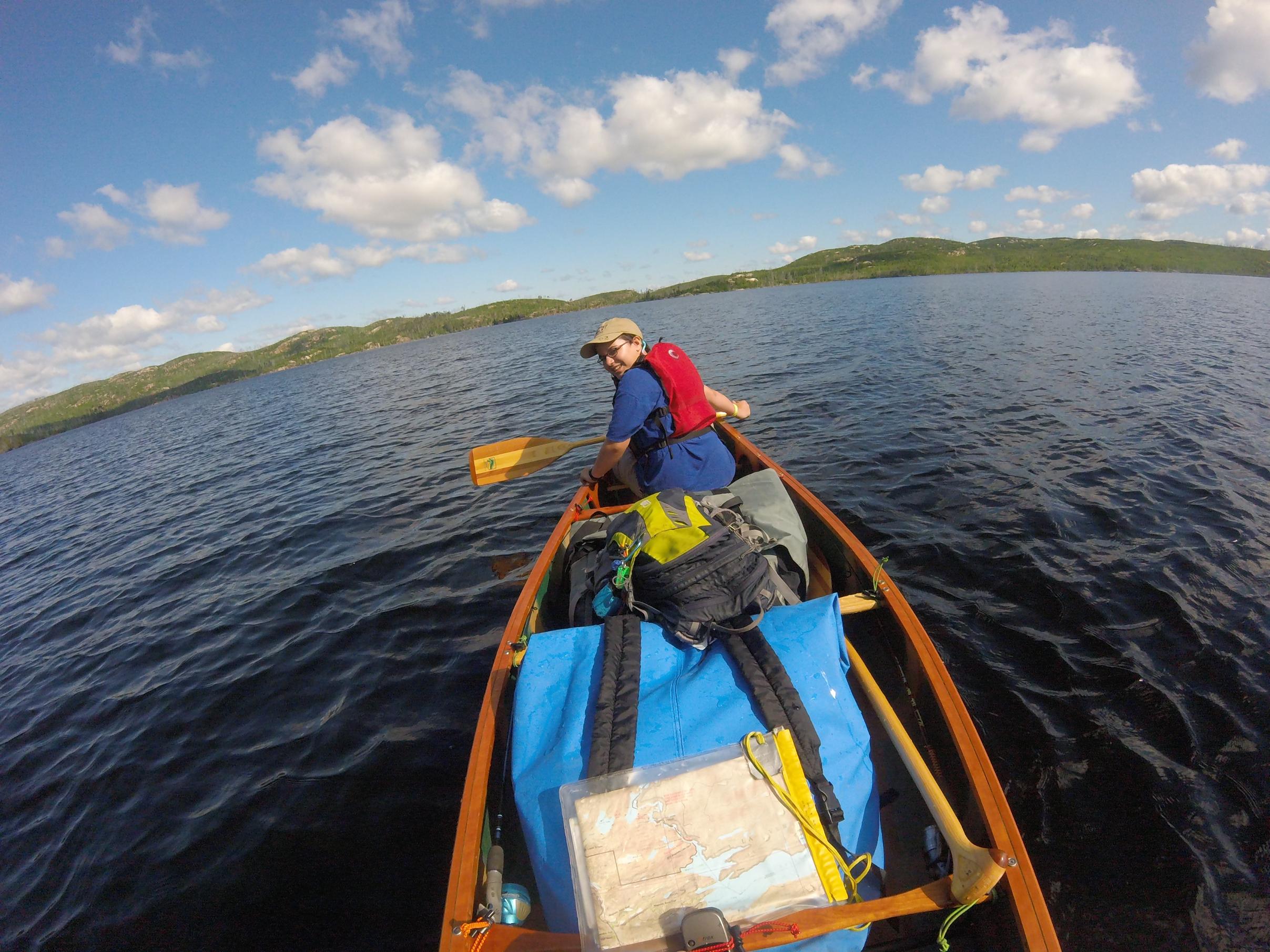 I don't know who was at that last cabin on the island on Magnetic before officially entering the wilderness but they were absolutely blasting some 80s music for everyone to hear. We had a laugh about it and kept going. Before long we encountered the rapids ahead of Little Rock Falls that Mocha had told us about, and knew it was safe to run. So, after pausing for a couple minutes to scope them out and tell Evie what the plan was, we let the current pull us in. 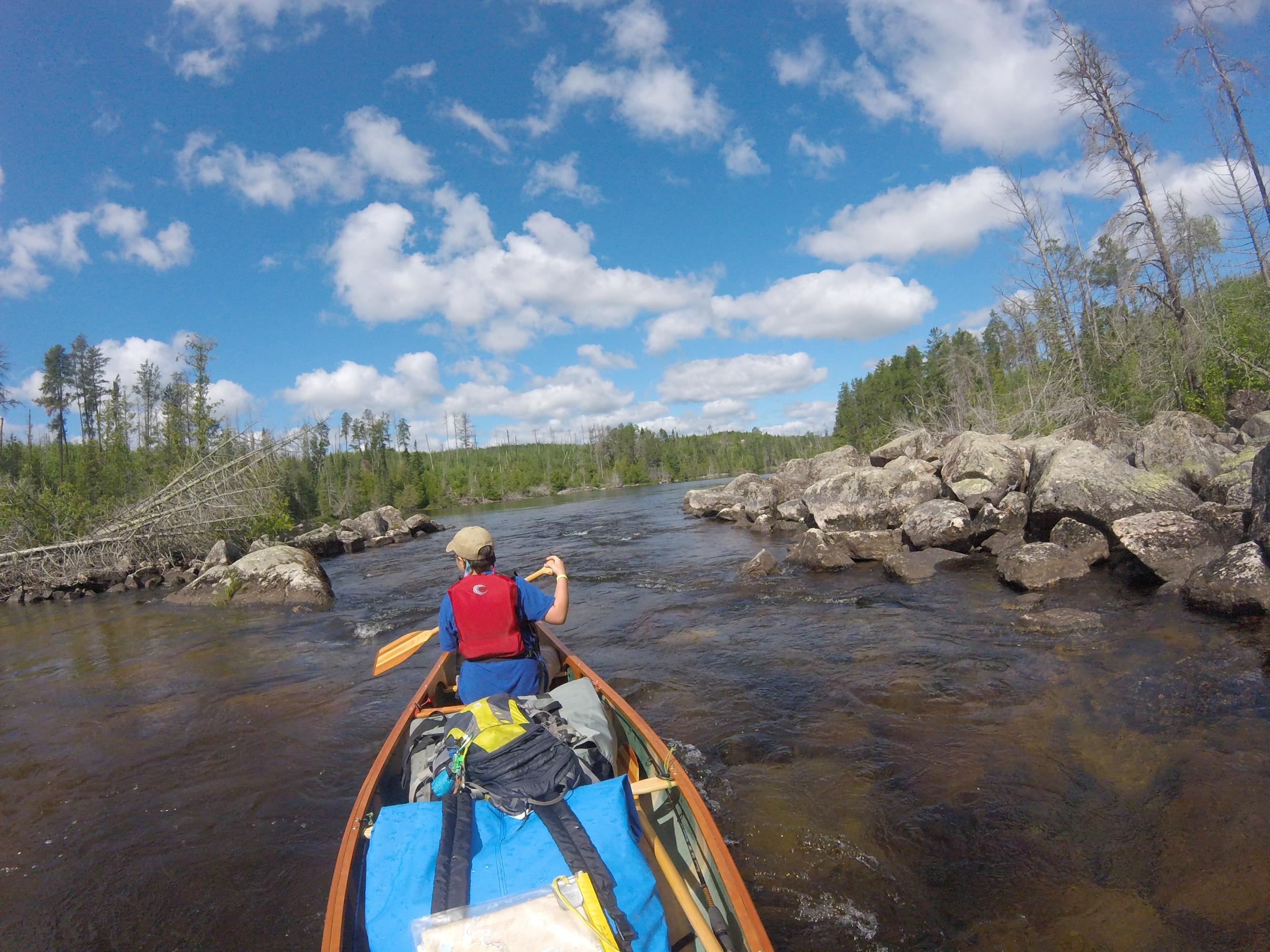 A few seconds later we got spit out the other side & Matt and Grace followed.

Minutes later we approached Little Rock Falls & true to Sheryl's advice the portage landing is practically at the precipice of the falls. I would hate to get sucked over them, especially with a boat full of gear!

This being our first portage of the trip, and 3/4 of our group's first portage ever, we were a little slow and disorganized. It was alright though since there was only a husband/wife on a daytrip following us to the falls to take photos. I showed Matt & the girls to look for blueberries and about immediately everyone was rewarded with a treat. 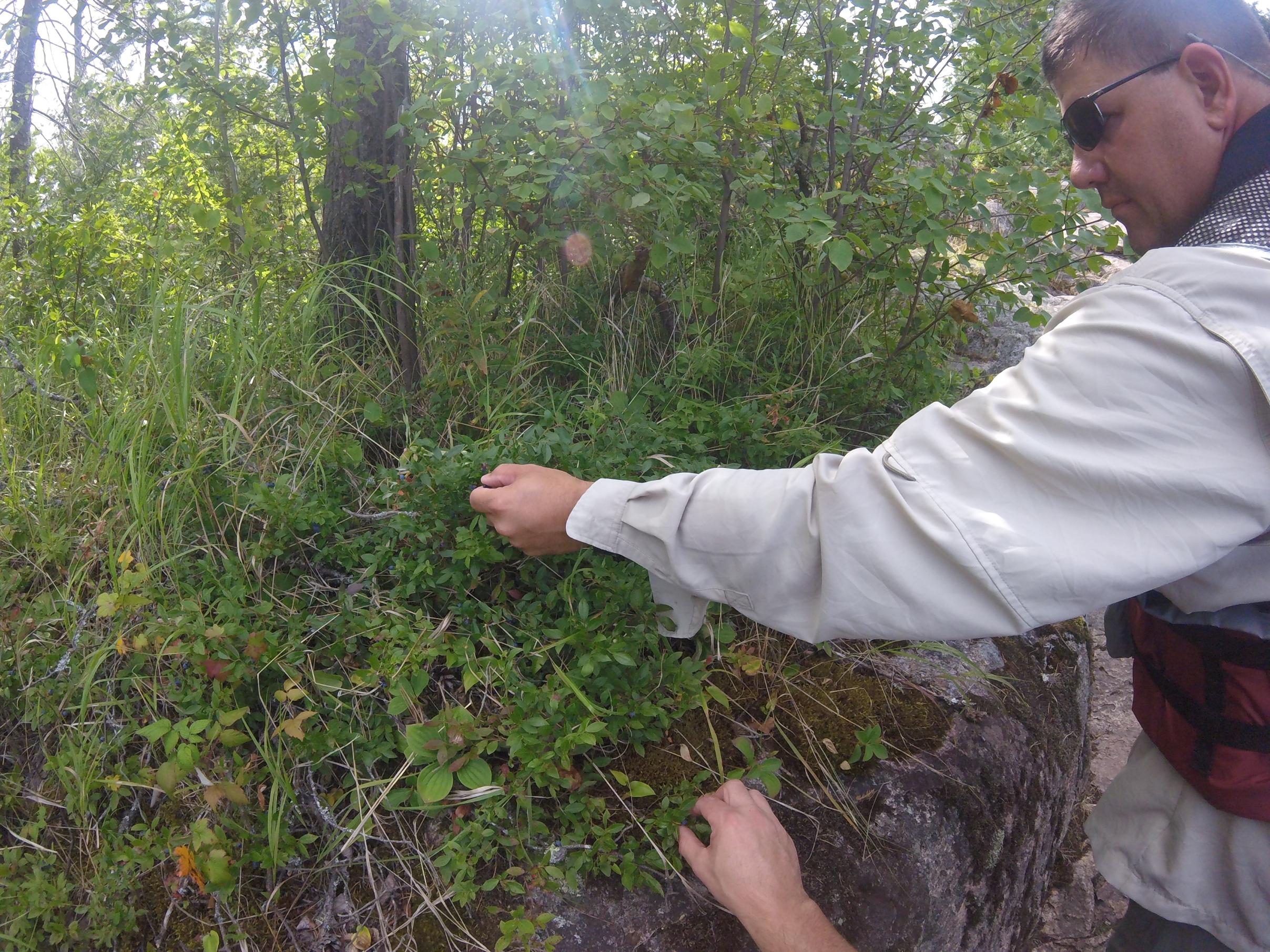 All in all it took us 3 trips to completely portage our gear. By the end of the week we would have figured out a system to get us done in 2 trips. 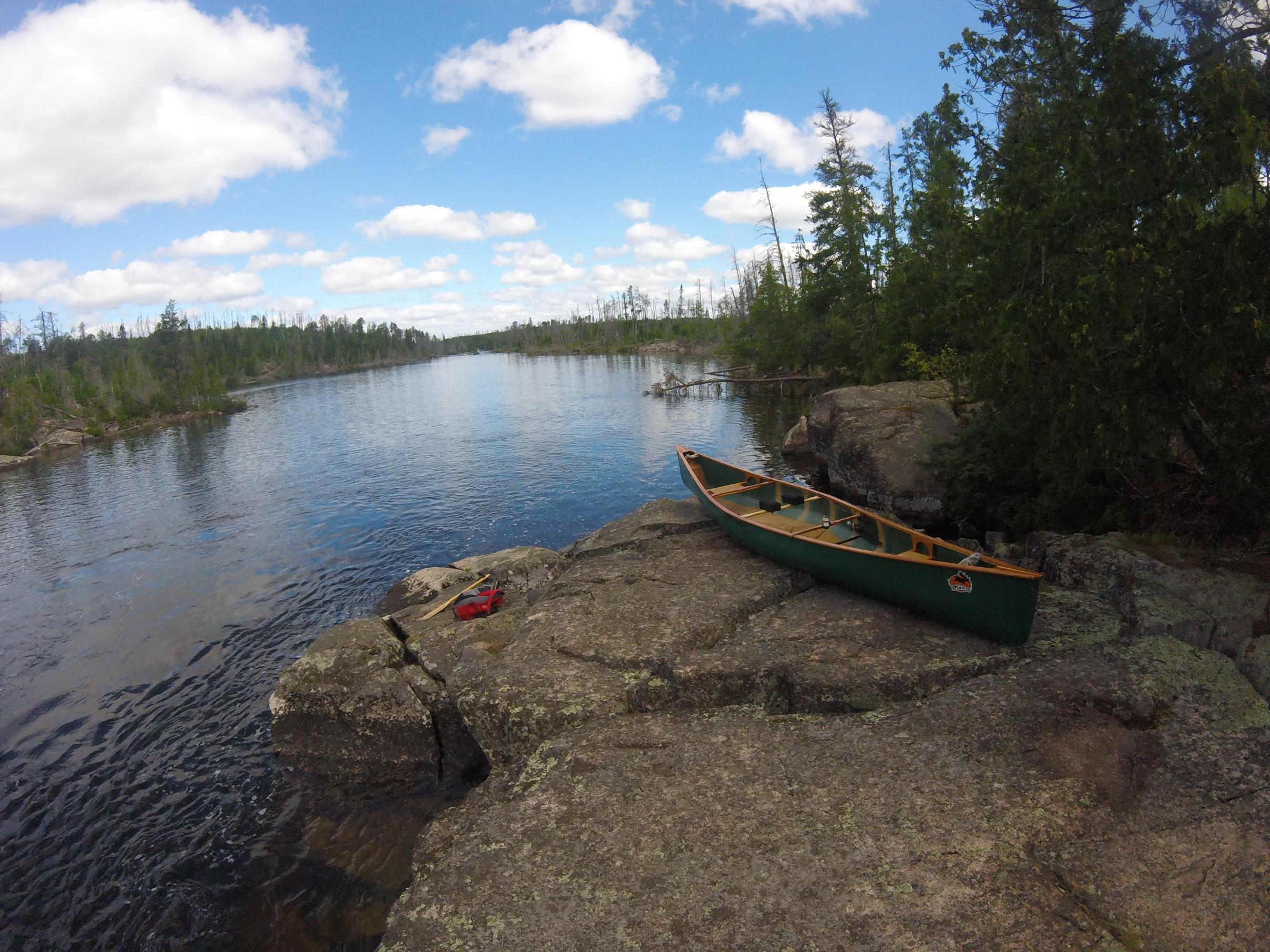 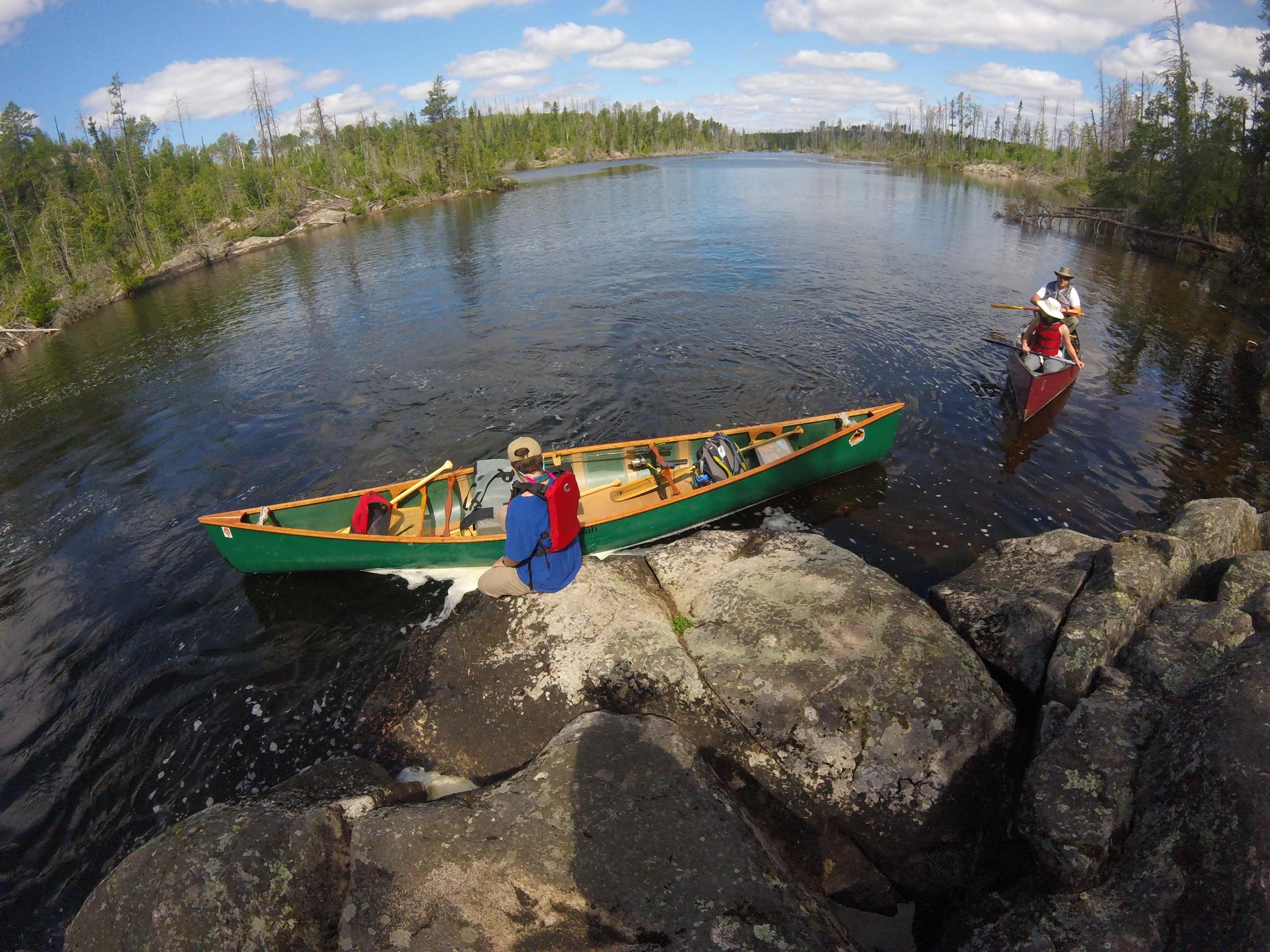 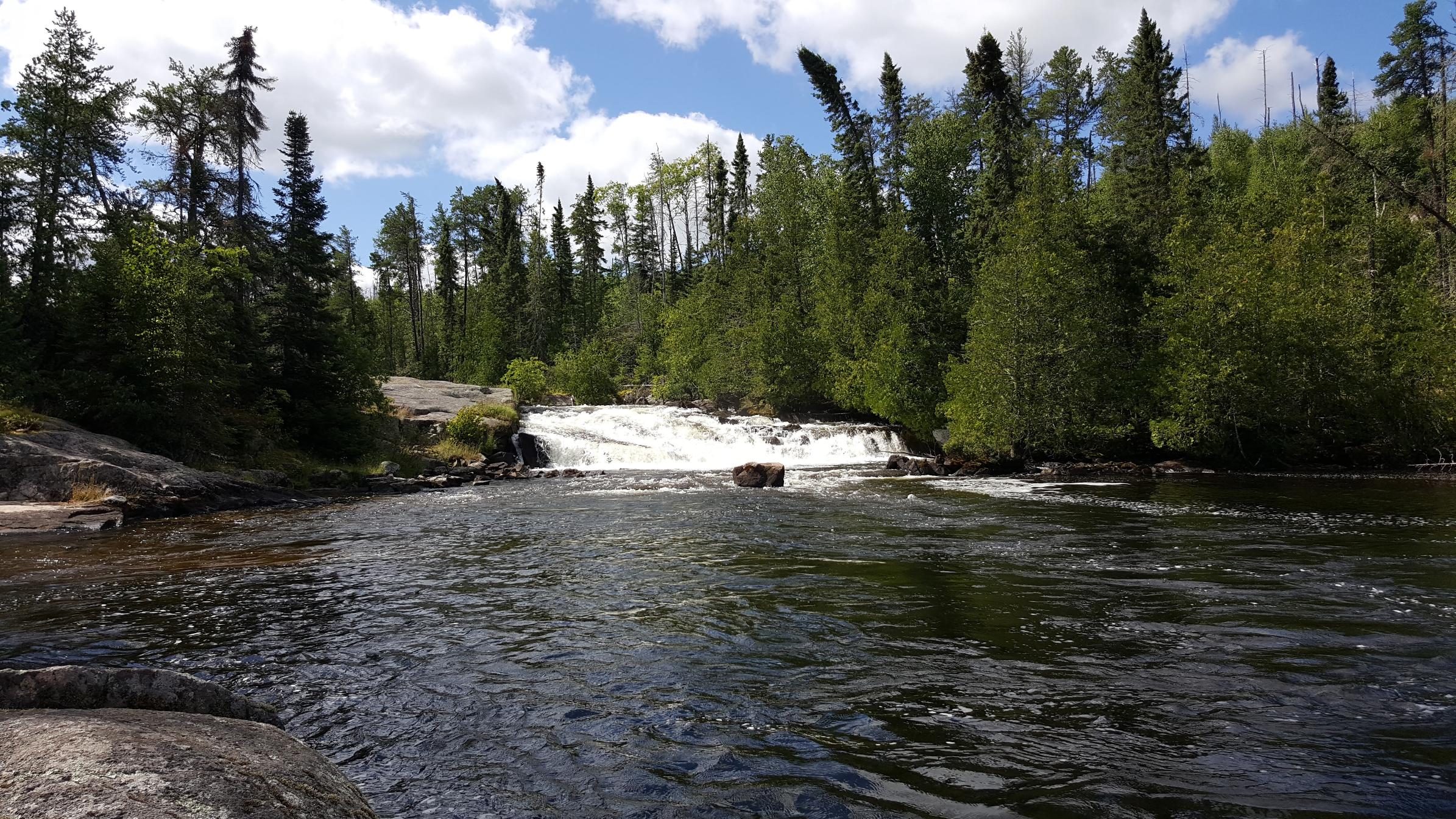 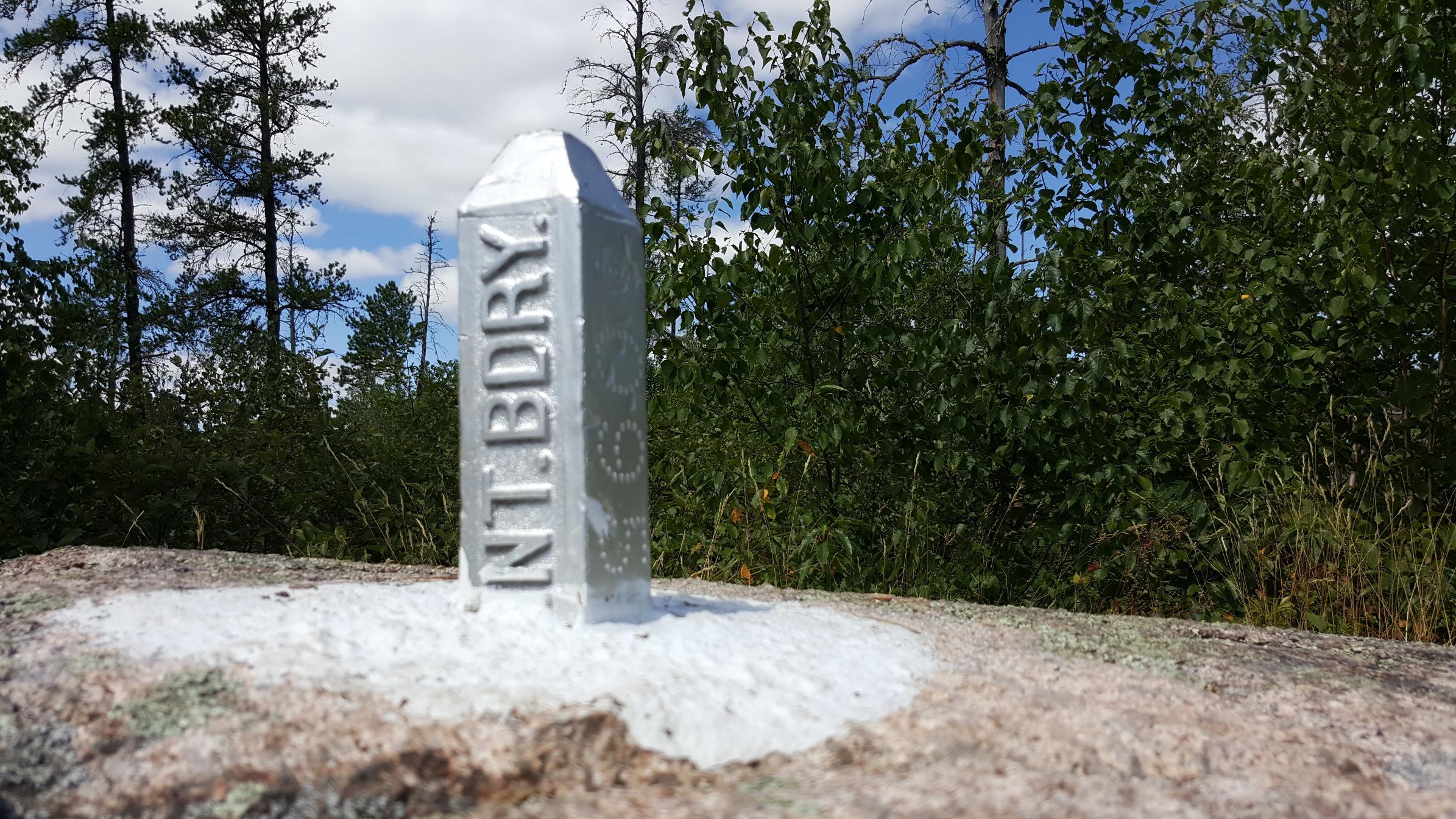 I had learned of a blueberry hotspot via the forums while planning the trip, so I had a waypoint marked on my GPS. The tip paid off and after a short break to pick we were on our way towards the Blueberry Portage. 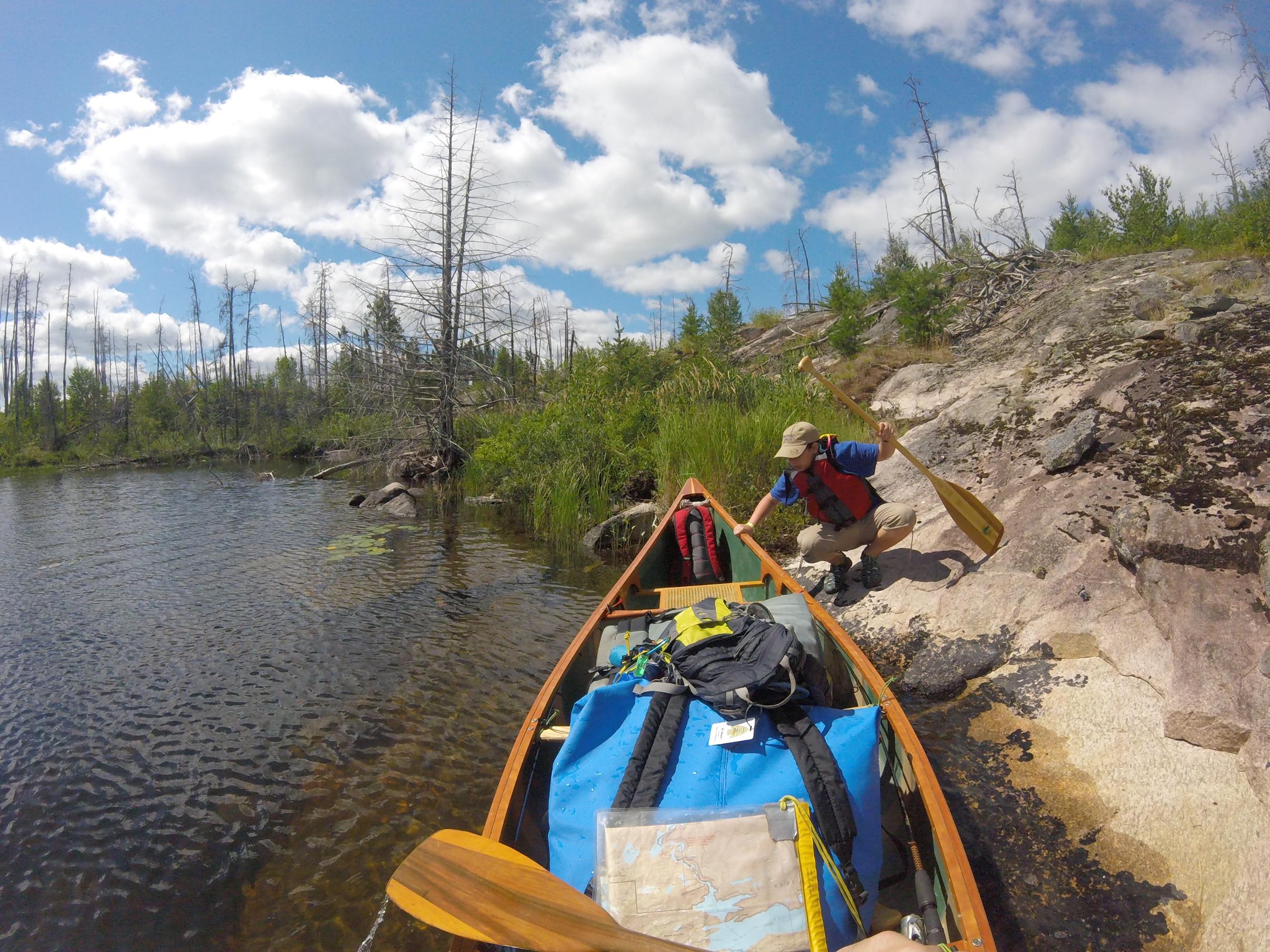 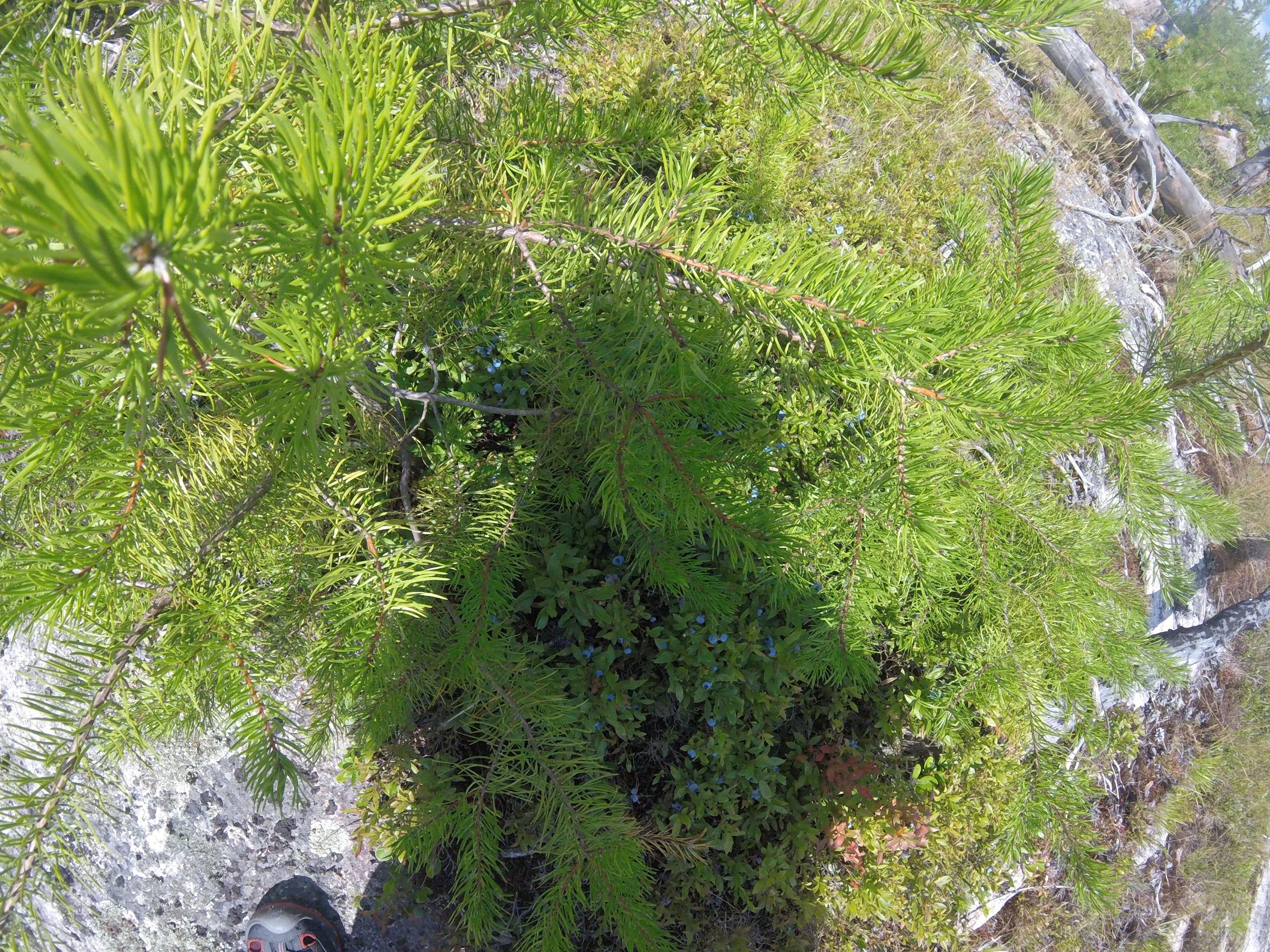 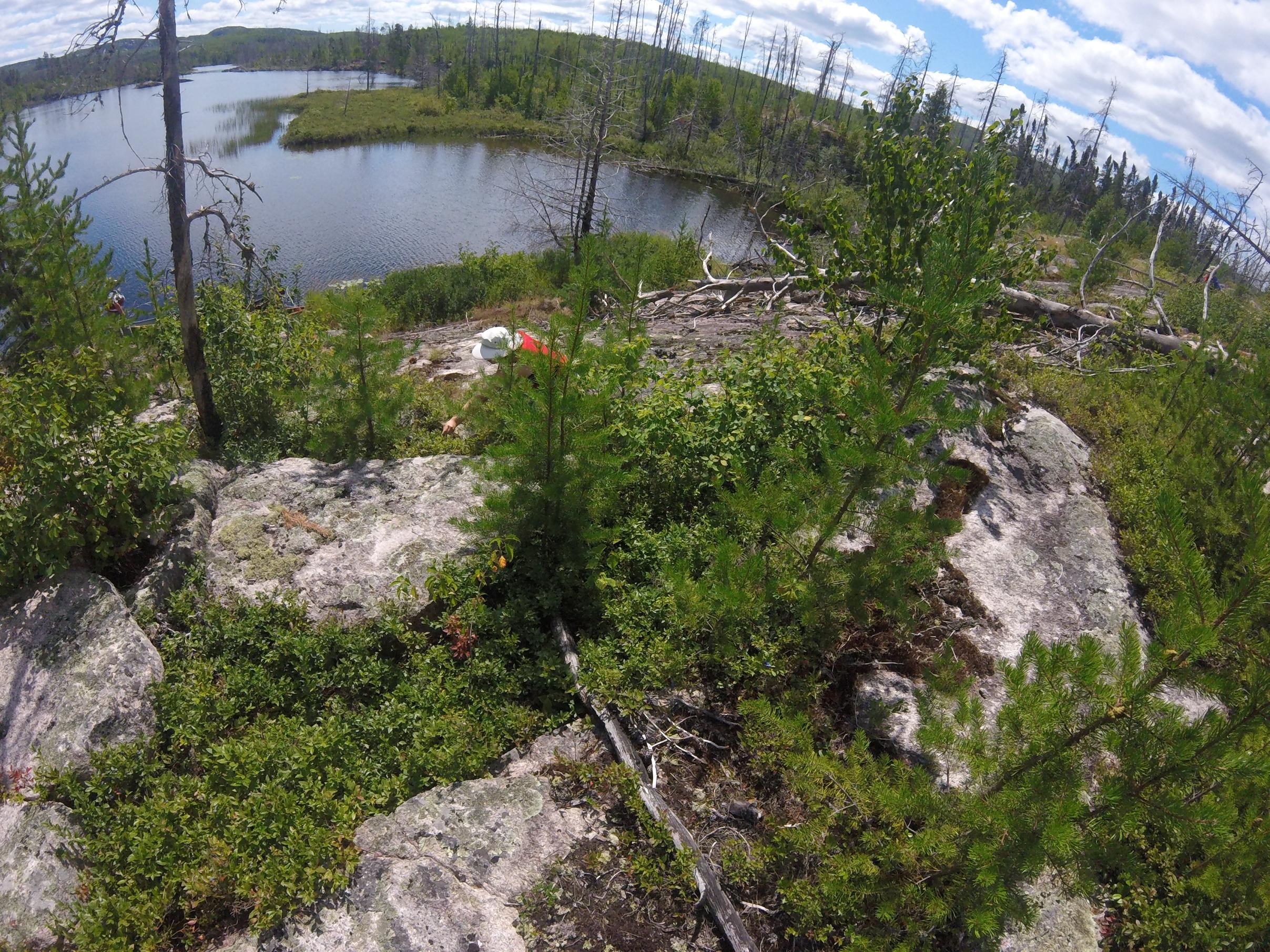 Approaching the Blueberry Portage we got a little turned around and ended up following the right channel into an opening, when we should have actually taken the left. 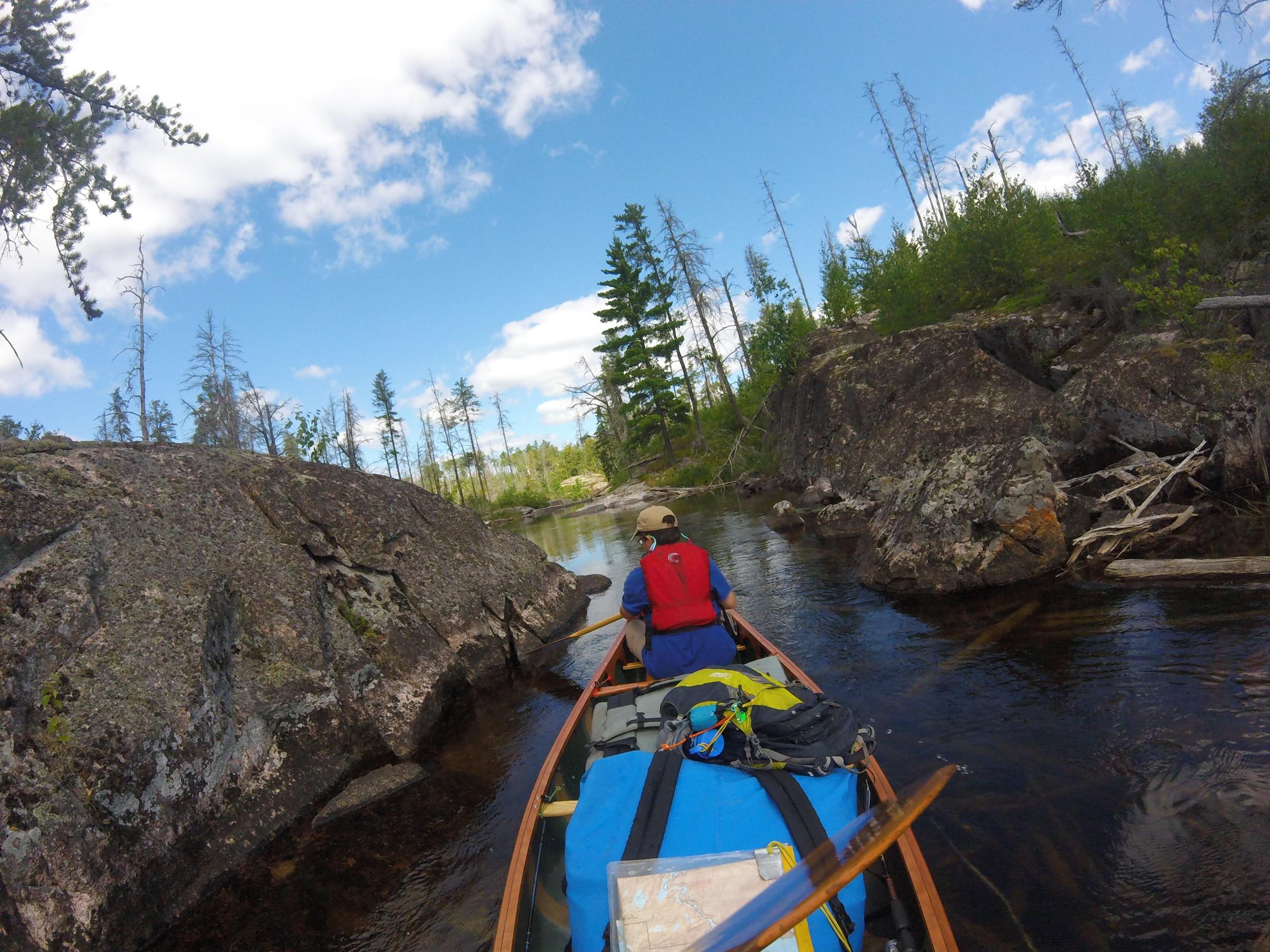 I'll take the blame for misleading us on that one, I had the portage marked in the wrong spot on my GPS. A couple minutes of searching with no result had us paddling back out and around, where the portage landing became pretty apparent. This portage wasn't terribly long but I'd say it was somewhat technical, especially on the Southern side where one has to descend 6' in short time. I don't think either of our canoes escaped getting banged on their sterns by this notch. 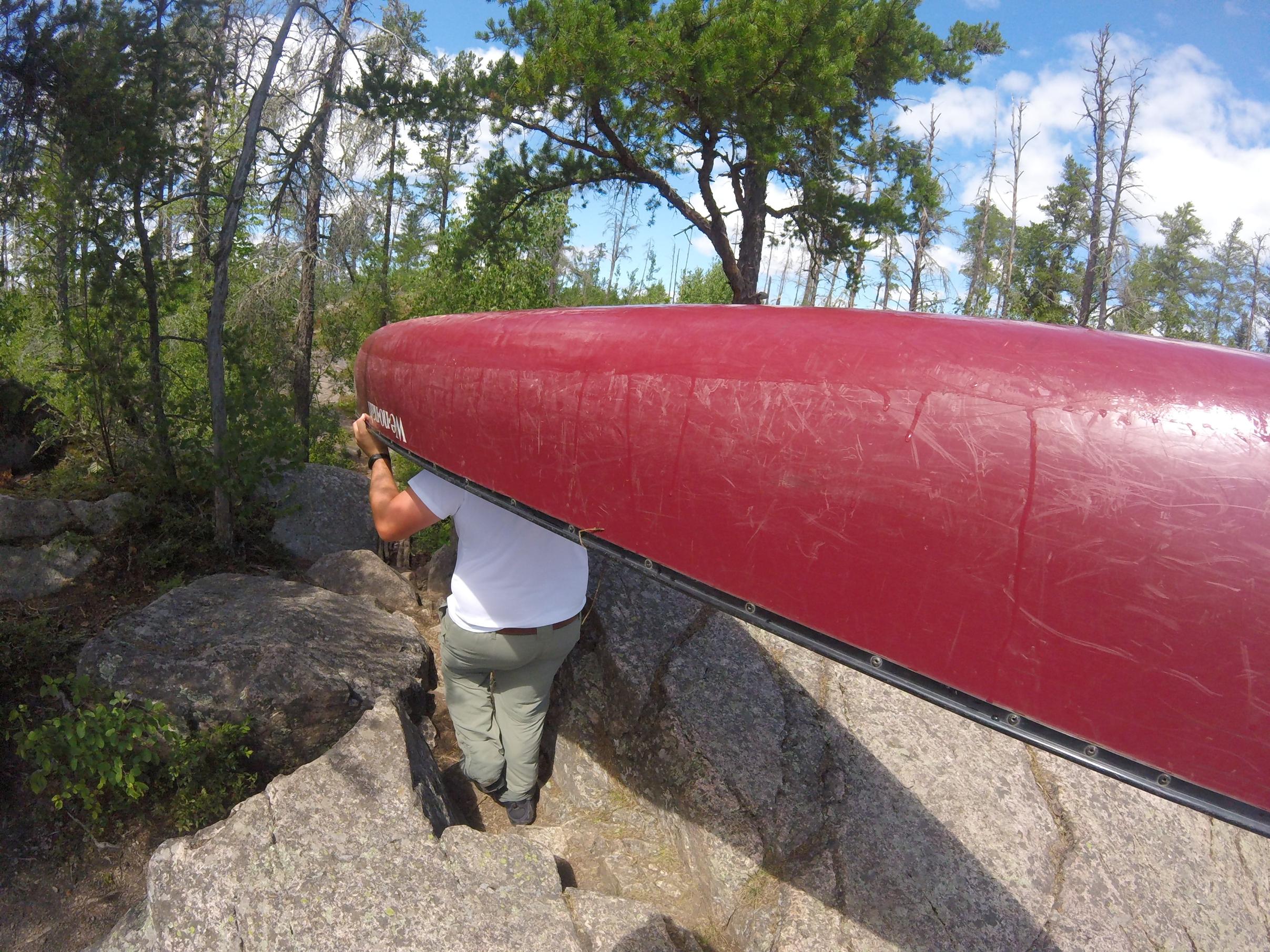 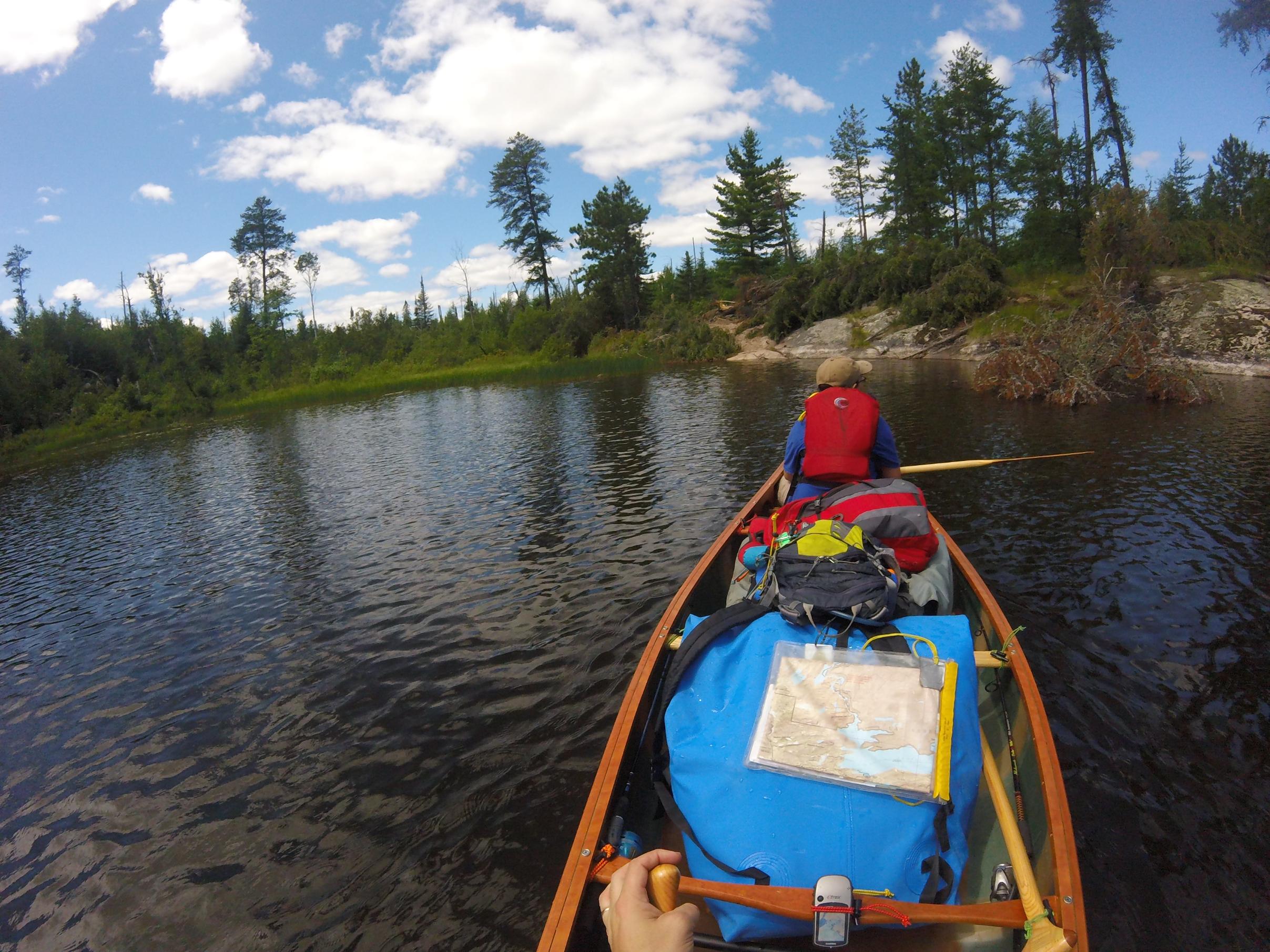 Matt decided to try out carrying two items on this portage. Here he is modeling for all of you: 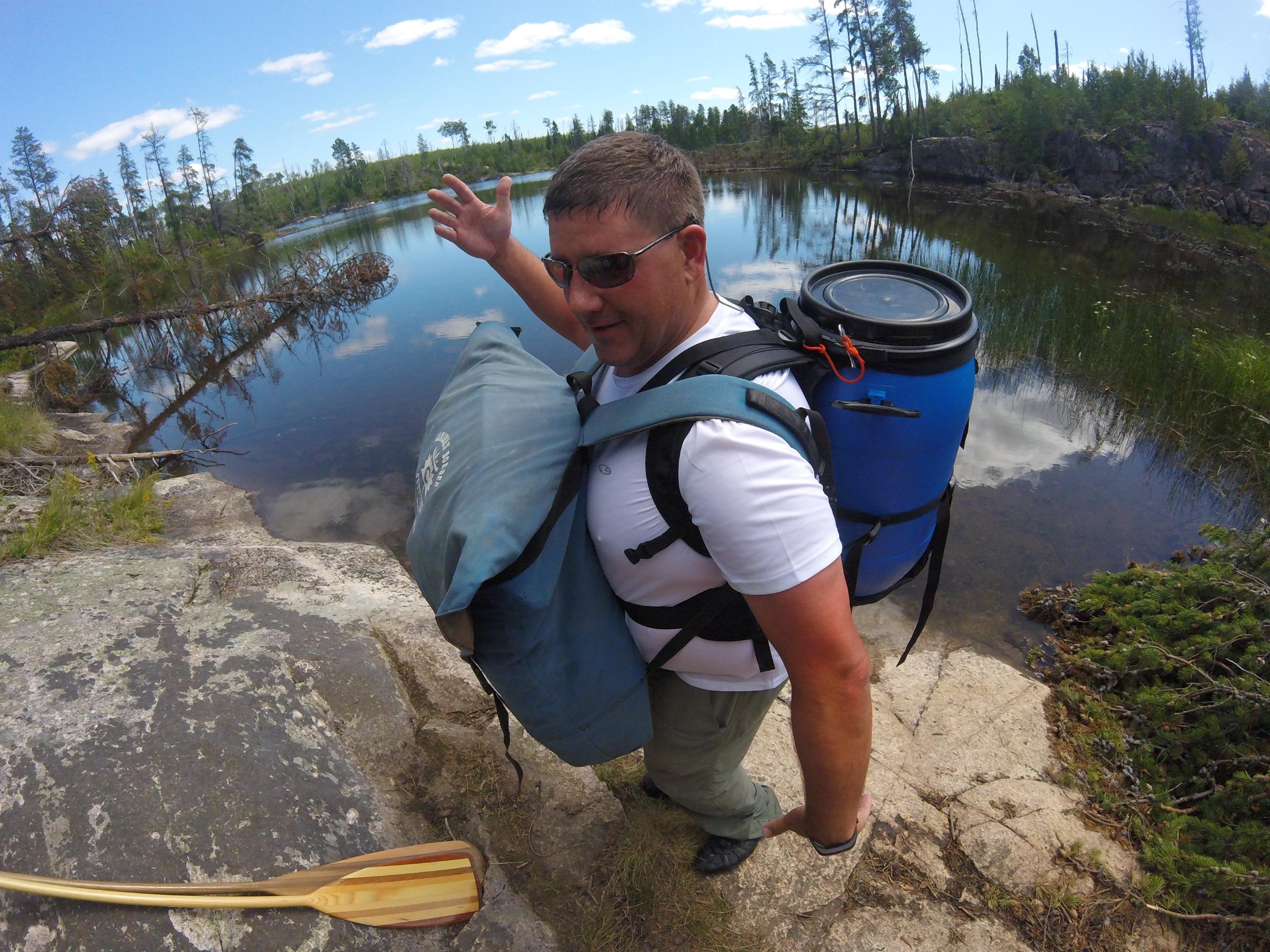 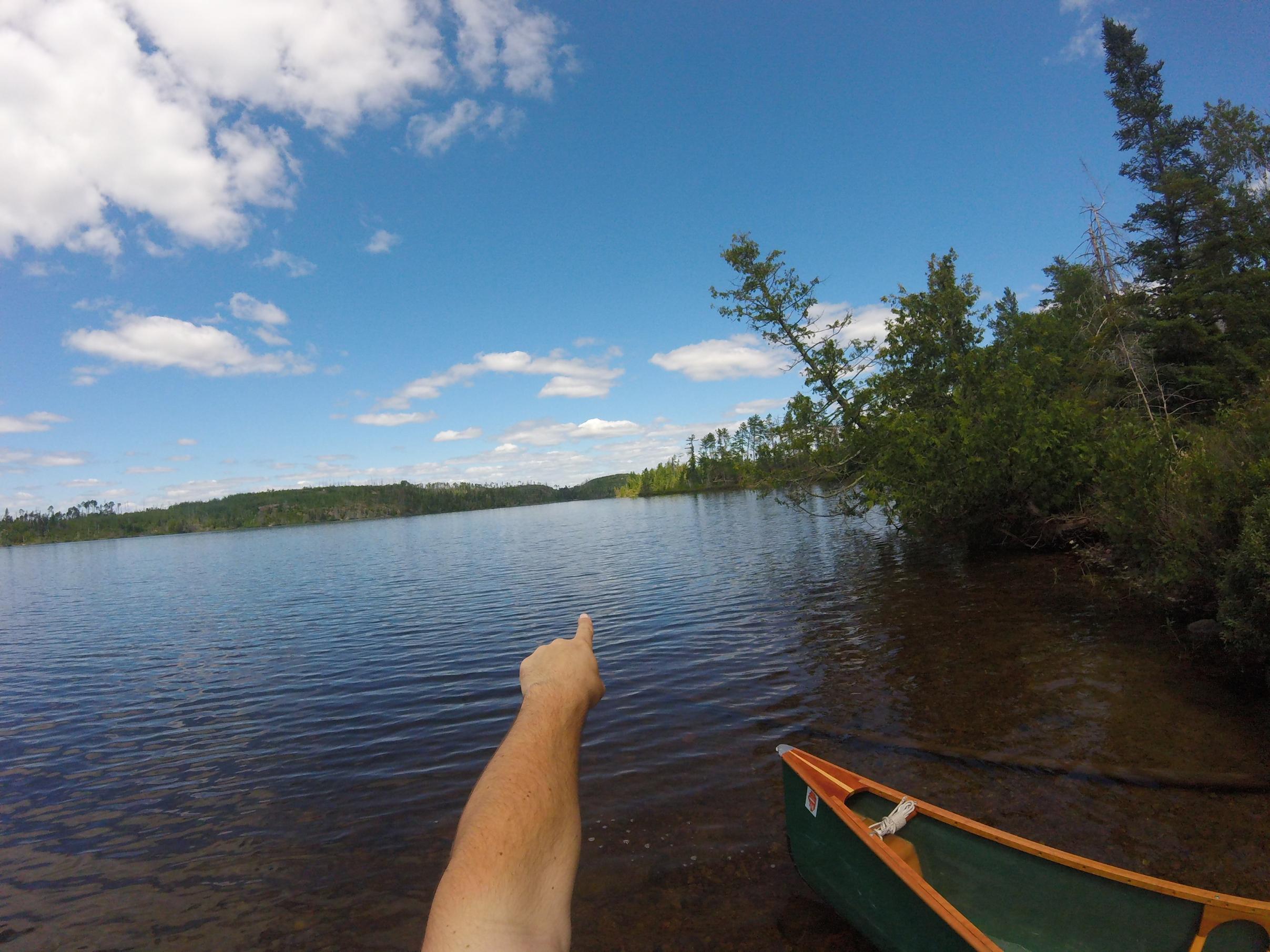 Way off in the distance here I'm pointing at our desired campsite for the next two nights - the Northern site on Clove, the one with the sandy beach. Mocha at GNO had another customer group planning on Clove as well, and she suggested the West site to them as they were hoping to do lots of fishing. I think she might have also suggested that site to them because she knew we were hoping for this site. Anyhow, we couldn't be for sure from the portage but it sure looked like it was open.... Only way to tell was to get there and find out. If it was taken, all the other sites on Clove were taken so then we'd have to decide between portaging to Larch or pressing on towards the Devil's Elbow.

We paddled quickly up the lake and happily found the site unoccupied and perfectly sized for two tents. We got unloaded, set up camp, then relaxed some. The previous occupant of the site had left some welcome wood for us, but we decided to head out for more as we were going to need a nice supply for dinner plus breakfast in the morning. 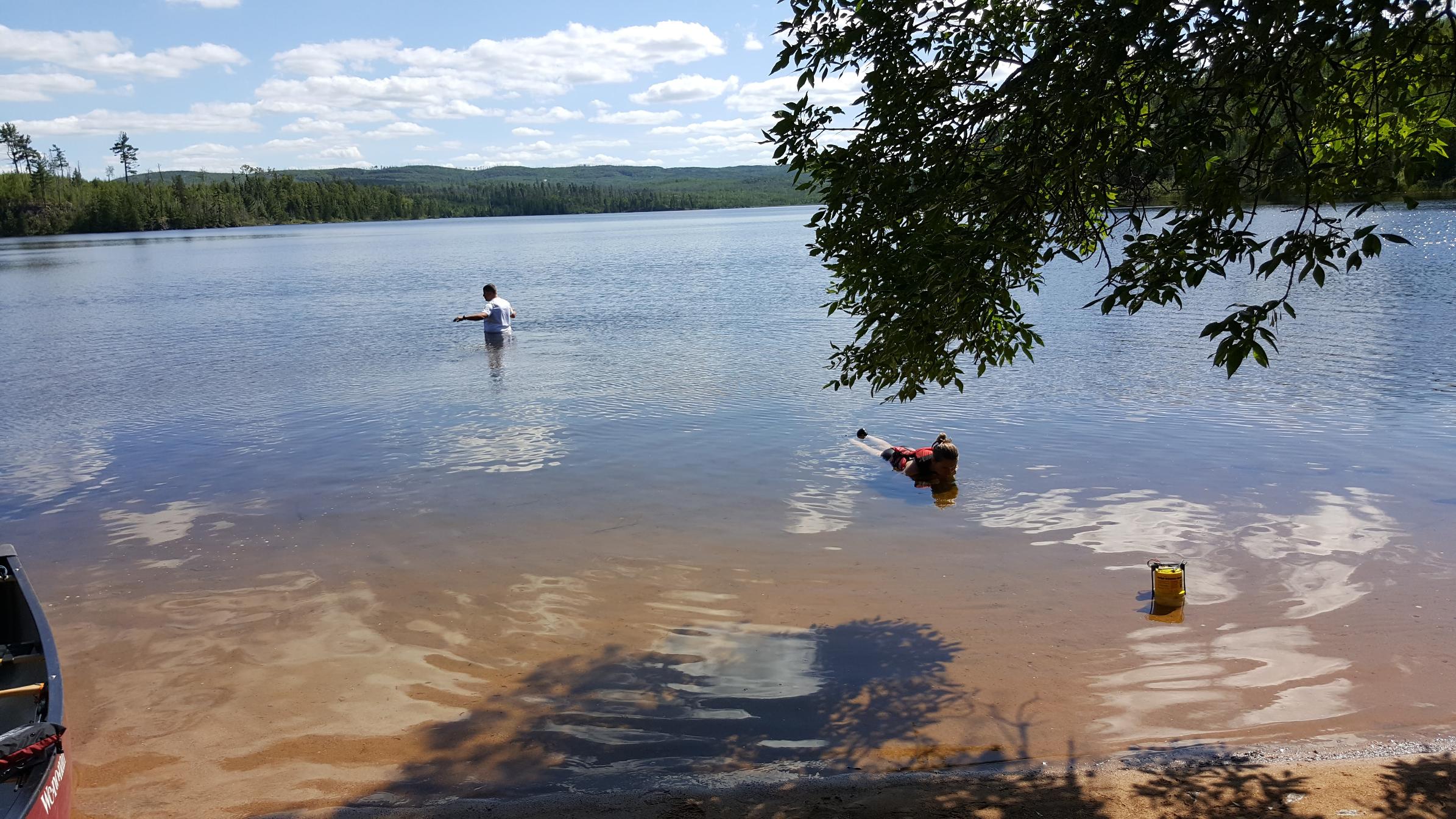 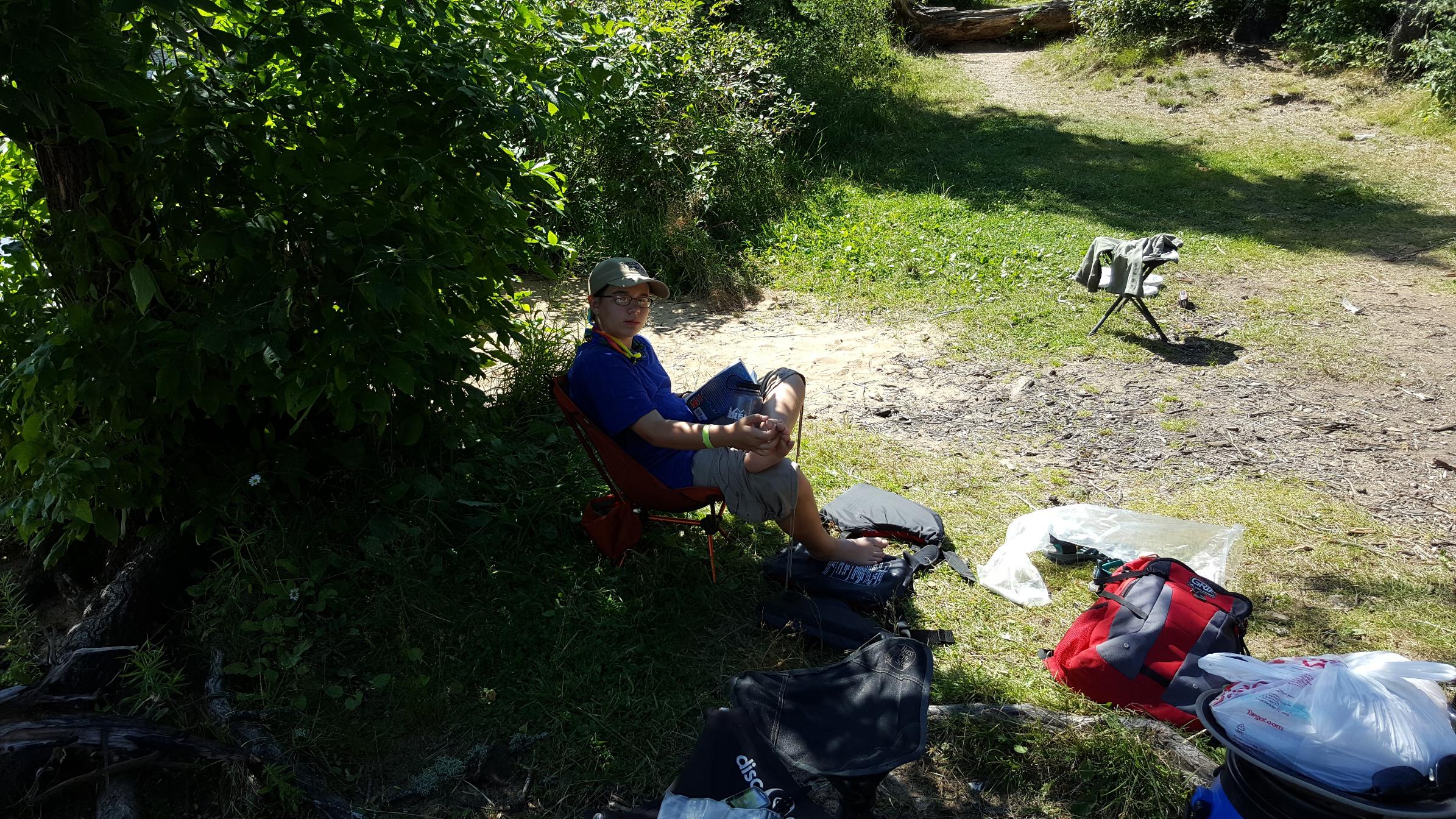 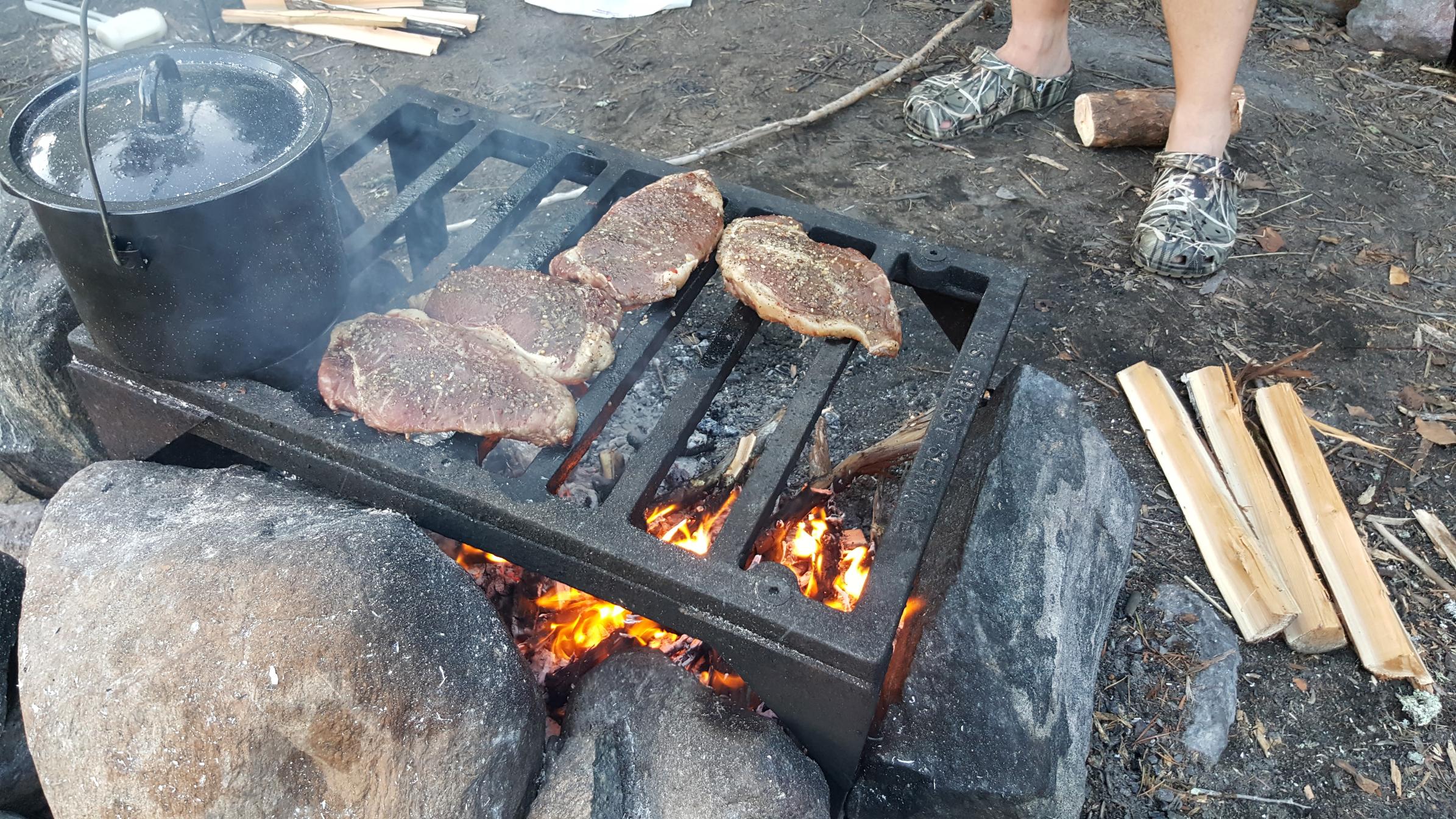 No photos, but Evie jumped out to an early lead for fish caught. After dinner I set her up with a lit bobber, split shot, and a hook tipped with a leech. She caught 3 bass before getting the bobber caught up in a tree. Sadly, the bobber contained my only Thill LED and it would be long dead before any hope of getting the bobber back in the morning.