England to Prairie Portage via Beaverhouse.
by woody066

Trip Type: Paddling Canoe
Entry Date: 09/15/2016
Entry Point: Quetico
Exit Point: Moose Lake (EP 25)
Number of Days: 8
Group Size: 4
Trip Introduction:
Hello everybody, my name is Woody. This is the tale of my fiftieth birthday trip with three friends from England to Quetico.
Discuss Trip: View Discussion Thread (10 messages)
Part 1 of 5
About nine years ago I started reading trip reports concerning the BWCA and Quetico on this website and a few on Songofthepaddle in the U.K. Over the following years I accumulated and read the books of Cliff Jacobson guide books by Robert Beymer and any other related publications, bought the maps and watched endless YouTube videos. I became a virtual expert. Unfortunately none of my friends were up for a trip mainly due to time, money or fear of bears. But a few months before my fiftieth birthday my friend Gary who I have done loads of fishing trips as well as lake district and Wales adventures with asked me what midlife crisis adventure I wanted to do. Well the wheels were set in motion and along with another fellow adventurer Mat and Garys friend Nick the trip of a lifetime was on. I contacted Adam Macht at Piragis Northwoods In Ely Minnesota about a loop route through the BWCA and into Quetico but this was not possible due to our not being able to cross the Canadian border remotely we had to go through customs. Adam came up with some alternatives one of which was a route from Beaverhouse Lake to Moose Lake of approximately seventy seven miles, easy! With the help of the PaddlePlaner website I transferred the route to our large and small scale maps as well as the Gaia GPS app?on my iPhone? Between us we purchased two canoes to practice on our local rivers, the Medway and Stour in Kent as well as the Swale Estuary clocking up about eighty mile in total. Each person also started a personal fitness regime, mine entailed walking my dog while carrying a heavy rucksack, not as heavy as the packs we ended up with though! In the run up to the trip I was in touch with Adam at the outfitters on a regular basis and he was extremely helpful with his knowledge and good advice. He even came to work on his day off just to meet us in person, excellent service. So after an eight hour flight, four hour drive a nights sleep and a hangover we were standing in the outfitters ready to pick up our rented gear. At this point I feel I must point out that I repeatedly told my friends to pack as light as possible. Looking at their packs it was obvious we had massively different concepts of lightweight. This was a worry. Then when I saw the mountain of food, cooking kit and extra camping kit we agreed to take I got proper worried. I had done all the route planing on the premiss of doing single portages well that wasn’t going to happen now! We all got into the outfitters minibus for our four to five hour shuttle into Canada to Beaverhouse Lake. Seeing as we all had jet lag Canadian customs kindly let us sit in their offices for nearly an hour to check our passports, according to Vidmar our American driver this was very unusual. After what seemed like the longest road in the world we turned off onto a gravel road which again went on for ever, the scale of the country was massive compared to little old Kent. First wildlife sighting was a young bull moose on the track near the carpark for Beaverhouse, they are huge much bigger than our cows. First portage was from the parking lot to Beaverhouse Lake, a taste of things to come. Looking out over Beaverhouse I got a bit nervous about the size of the water we had to cross but it was dead flat calm. So onwards to pay our camping fees at the ranger station. As time was getting on and we were knackered [plumb tuckered out] a camp was found just around the corner. I had fully intended to keep a daily journal but didn’t so some of the details may be a bit vague but you will get the general idea. First camp was very comfortable with steaks and potatoes cooked over the fire. 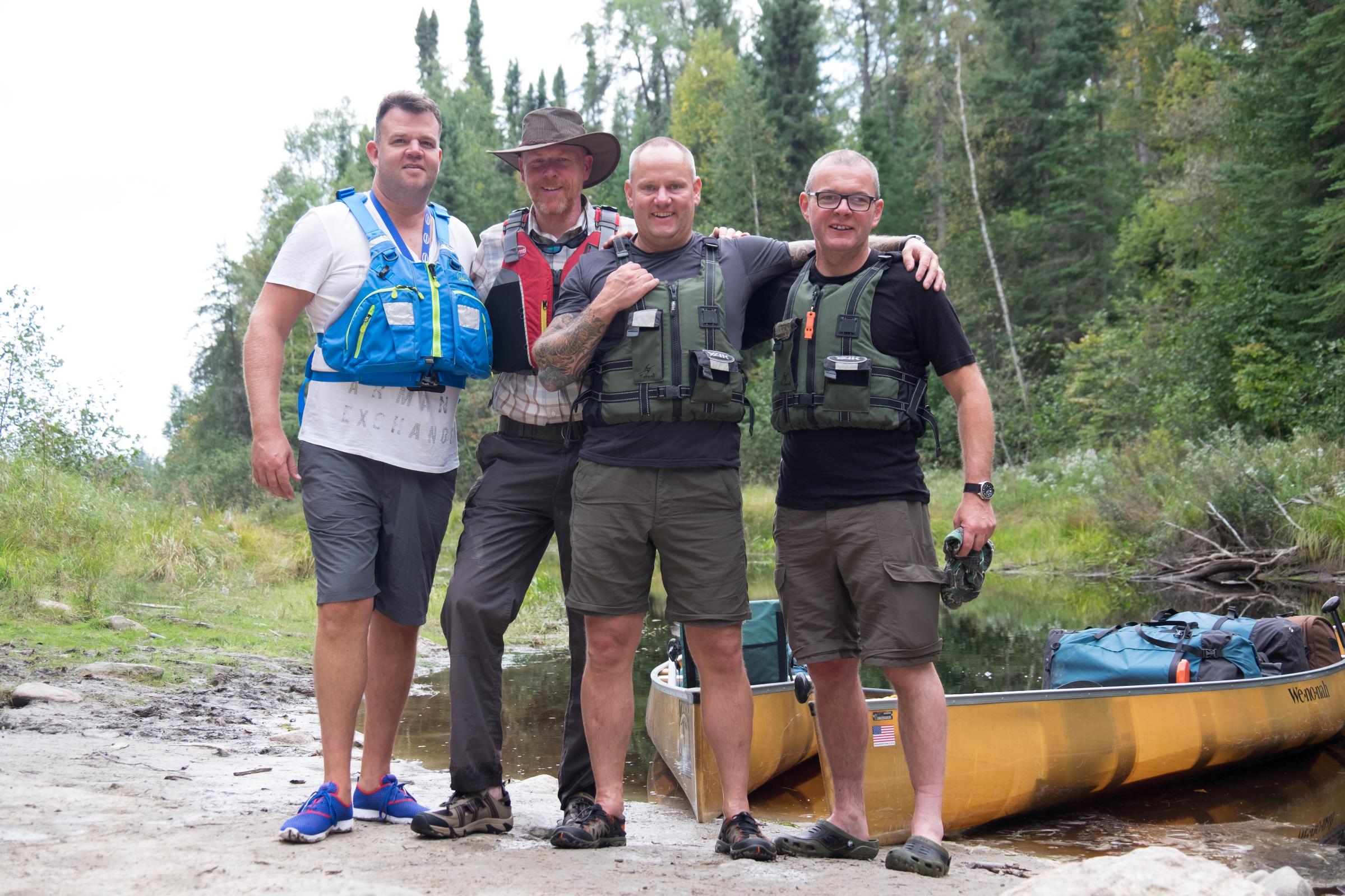 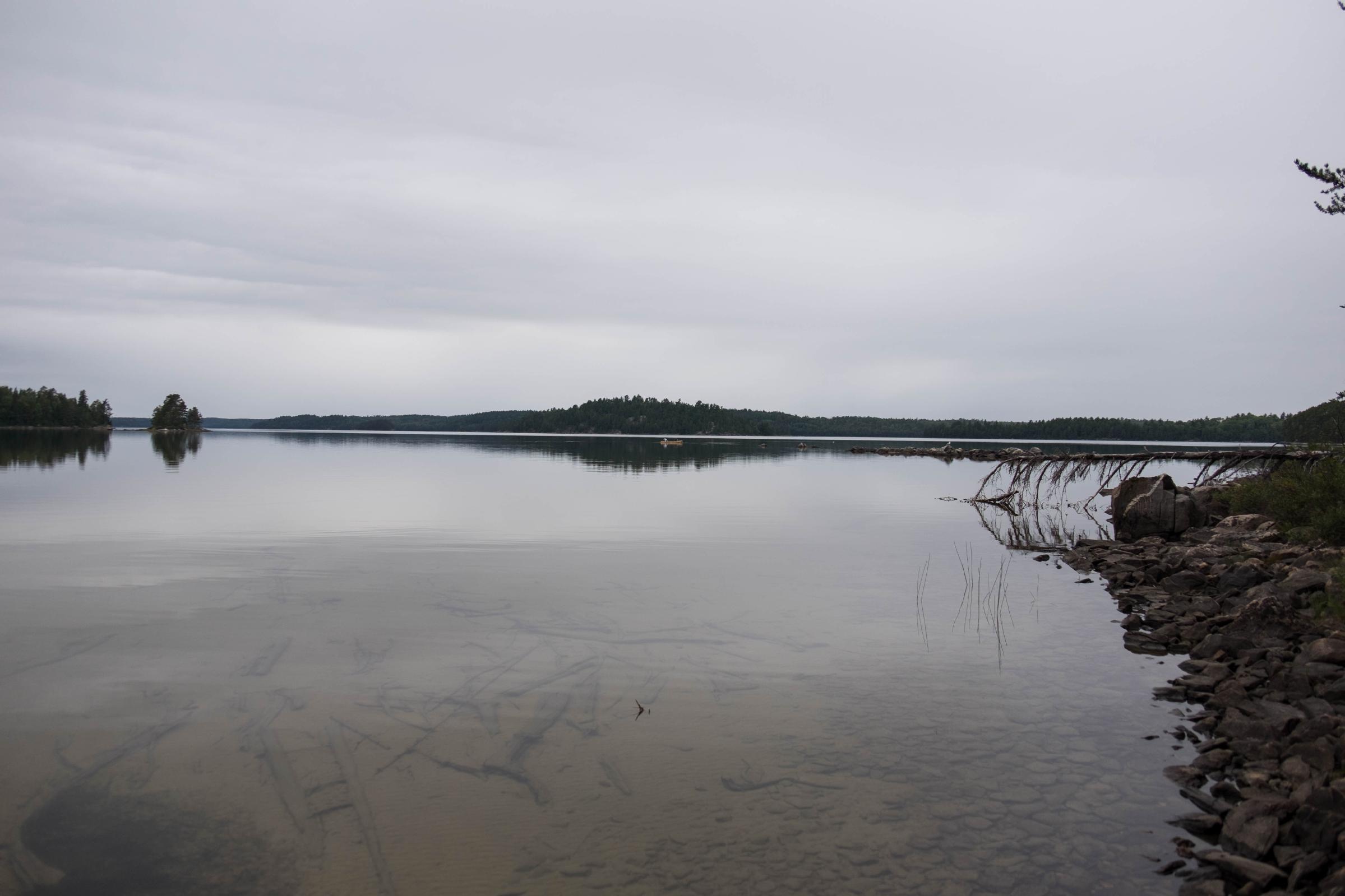 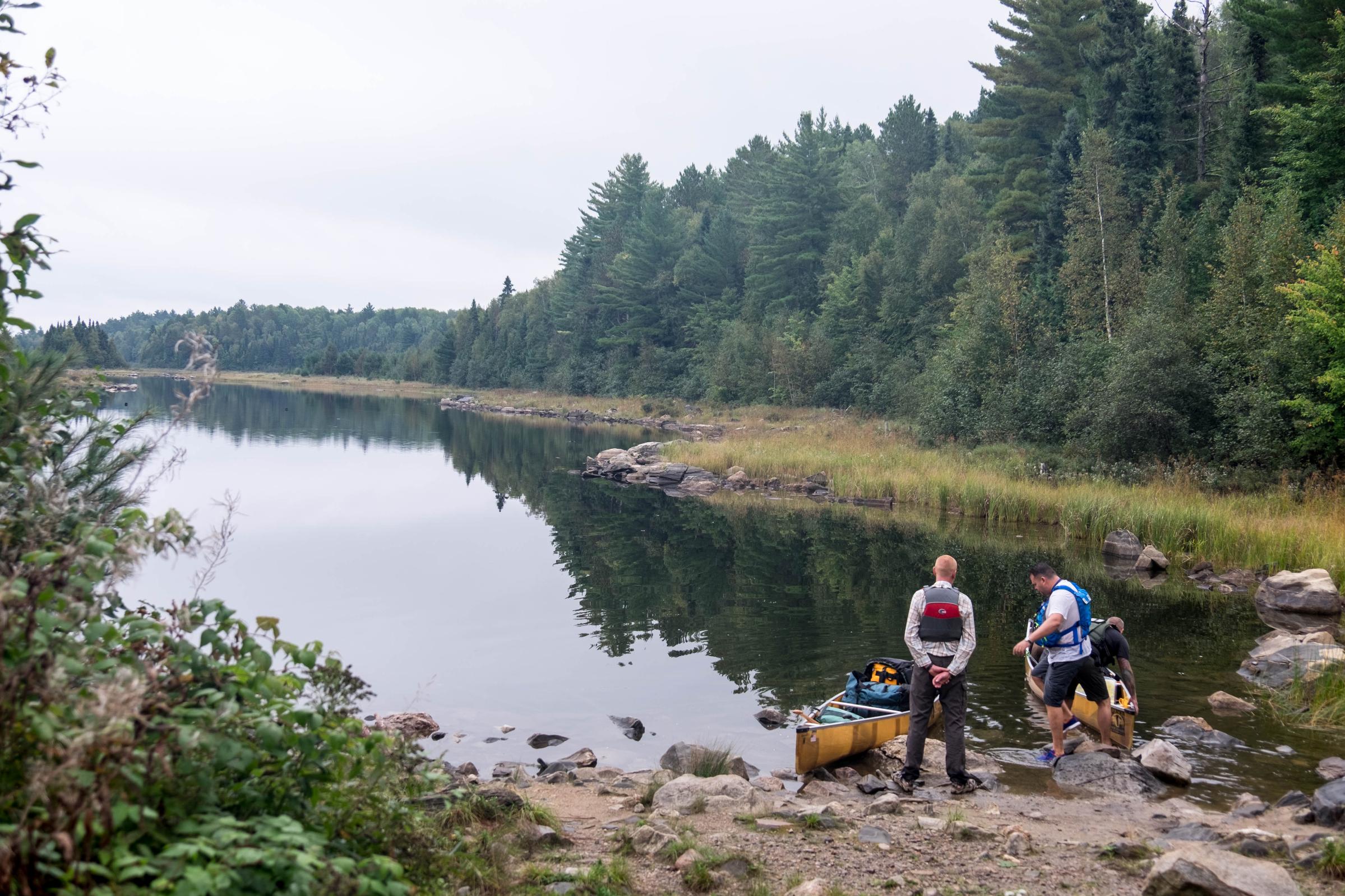 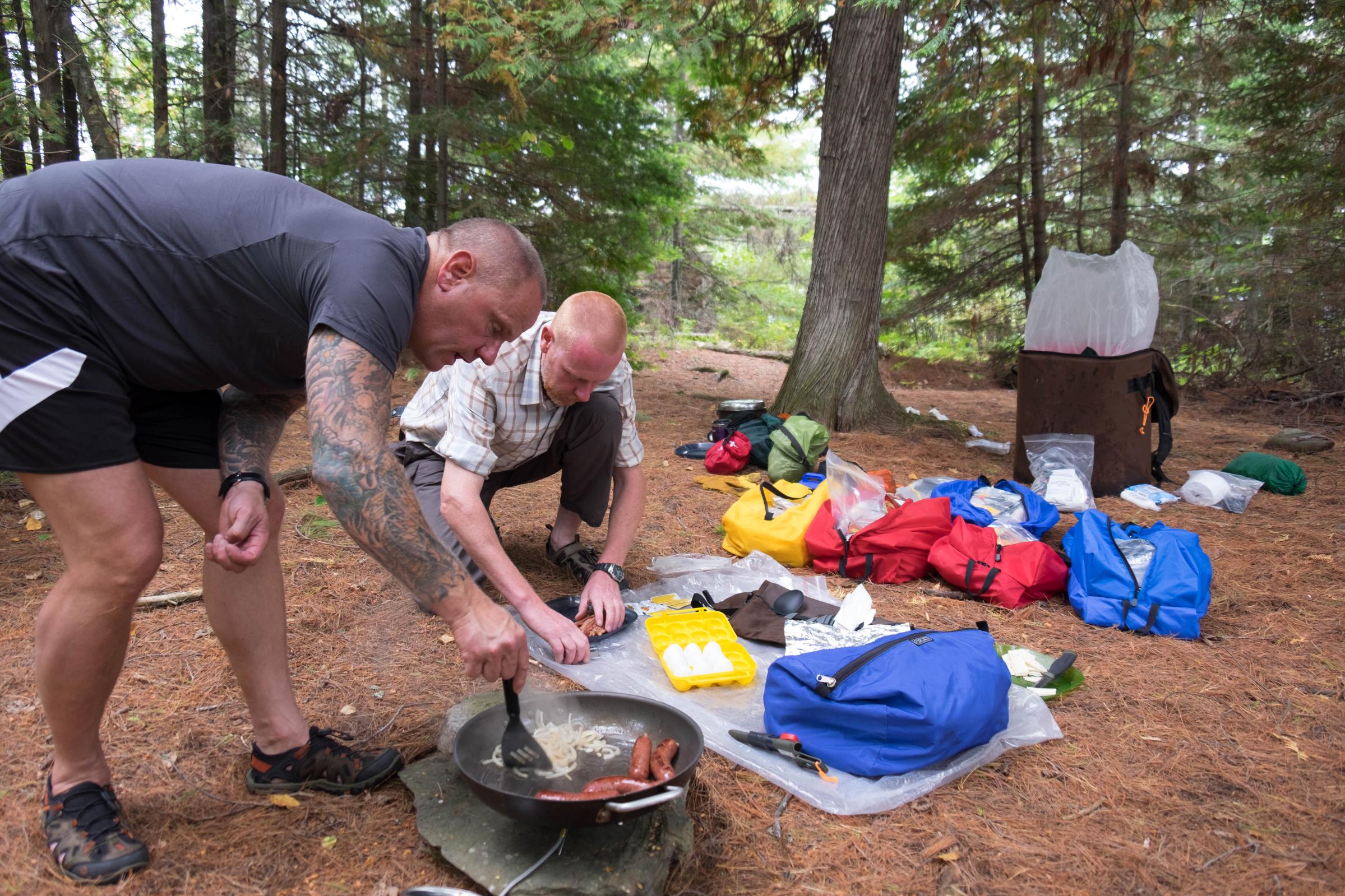 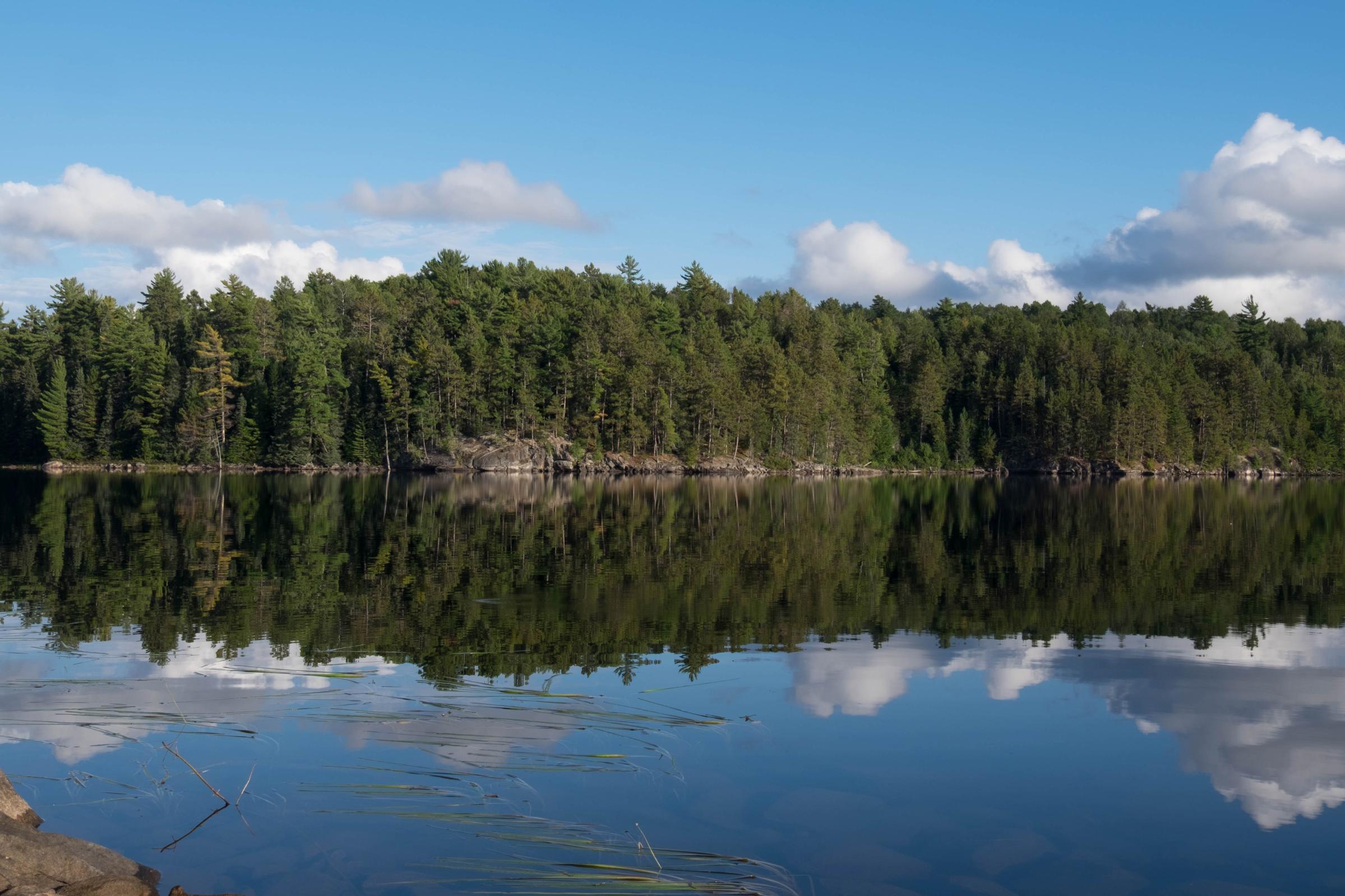 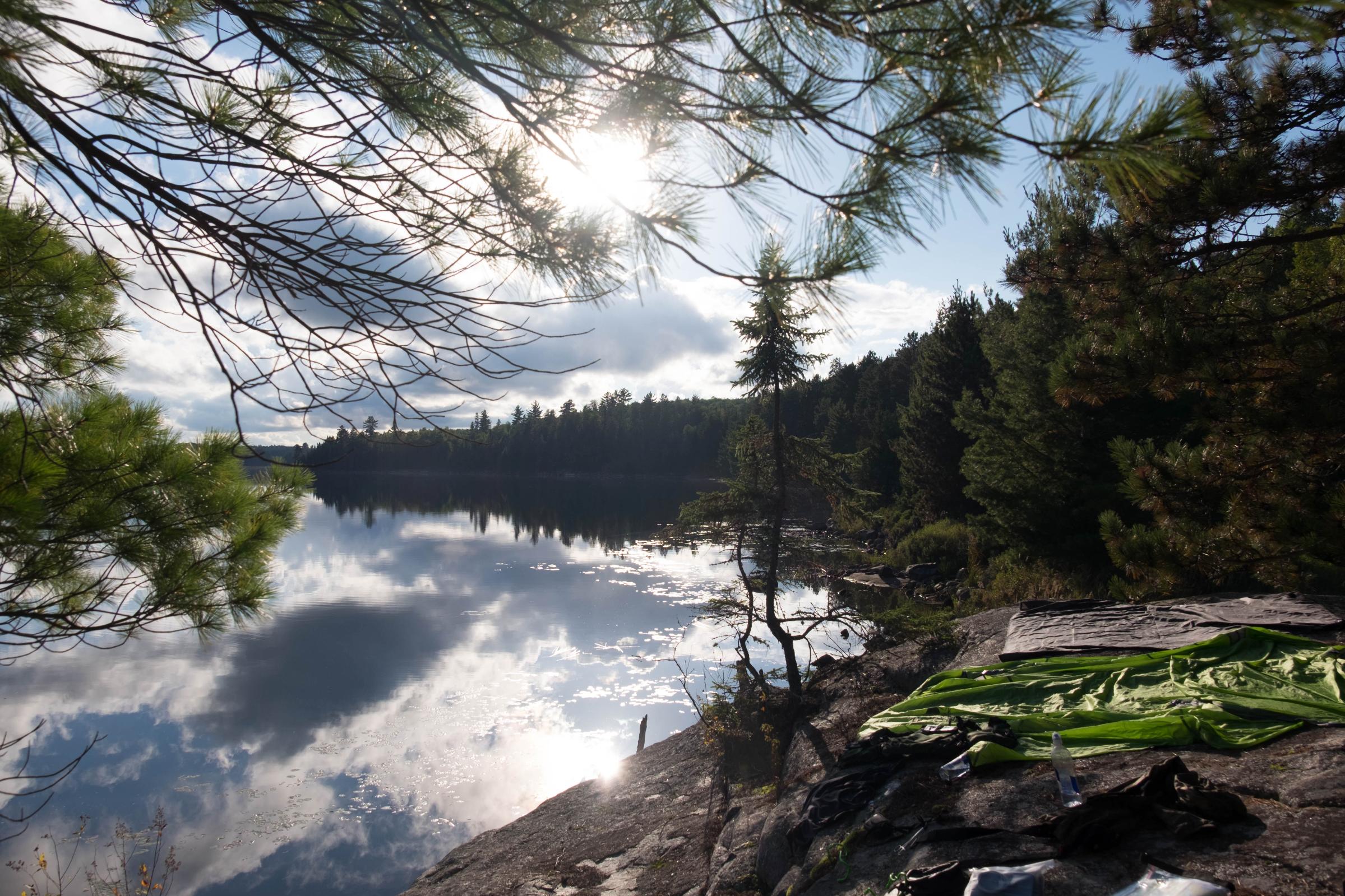 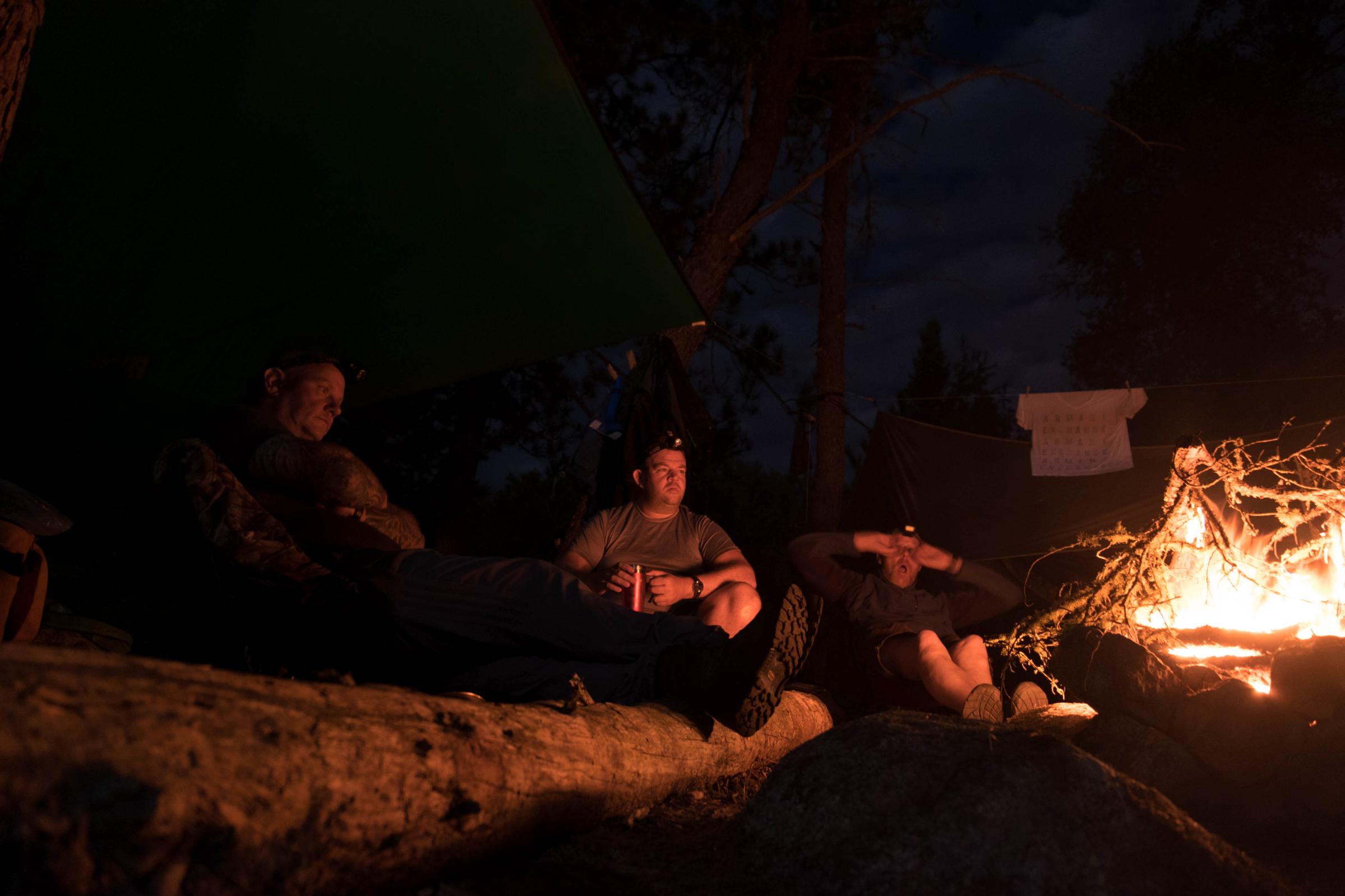 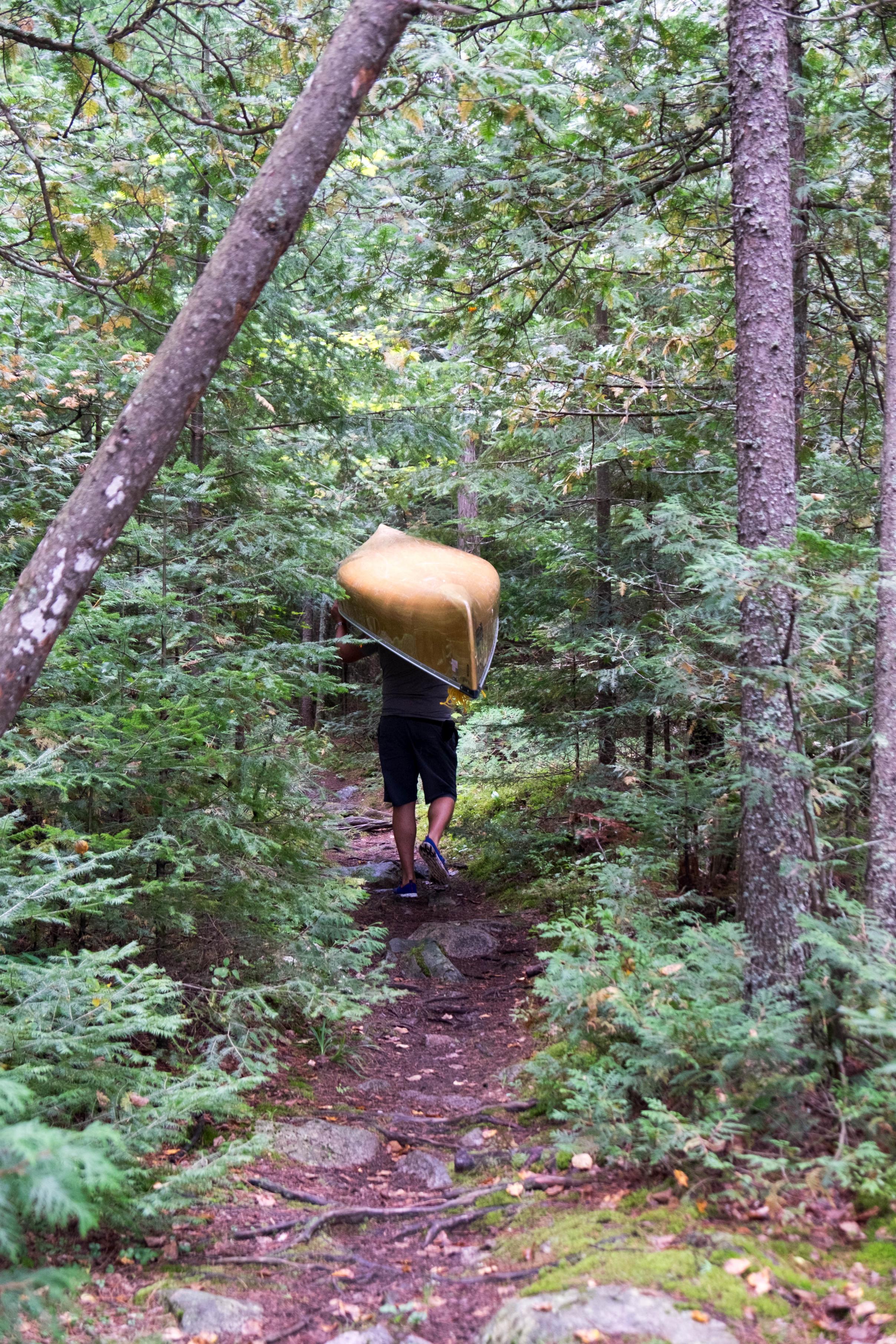 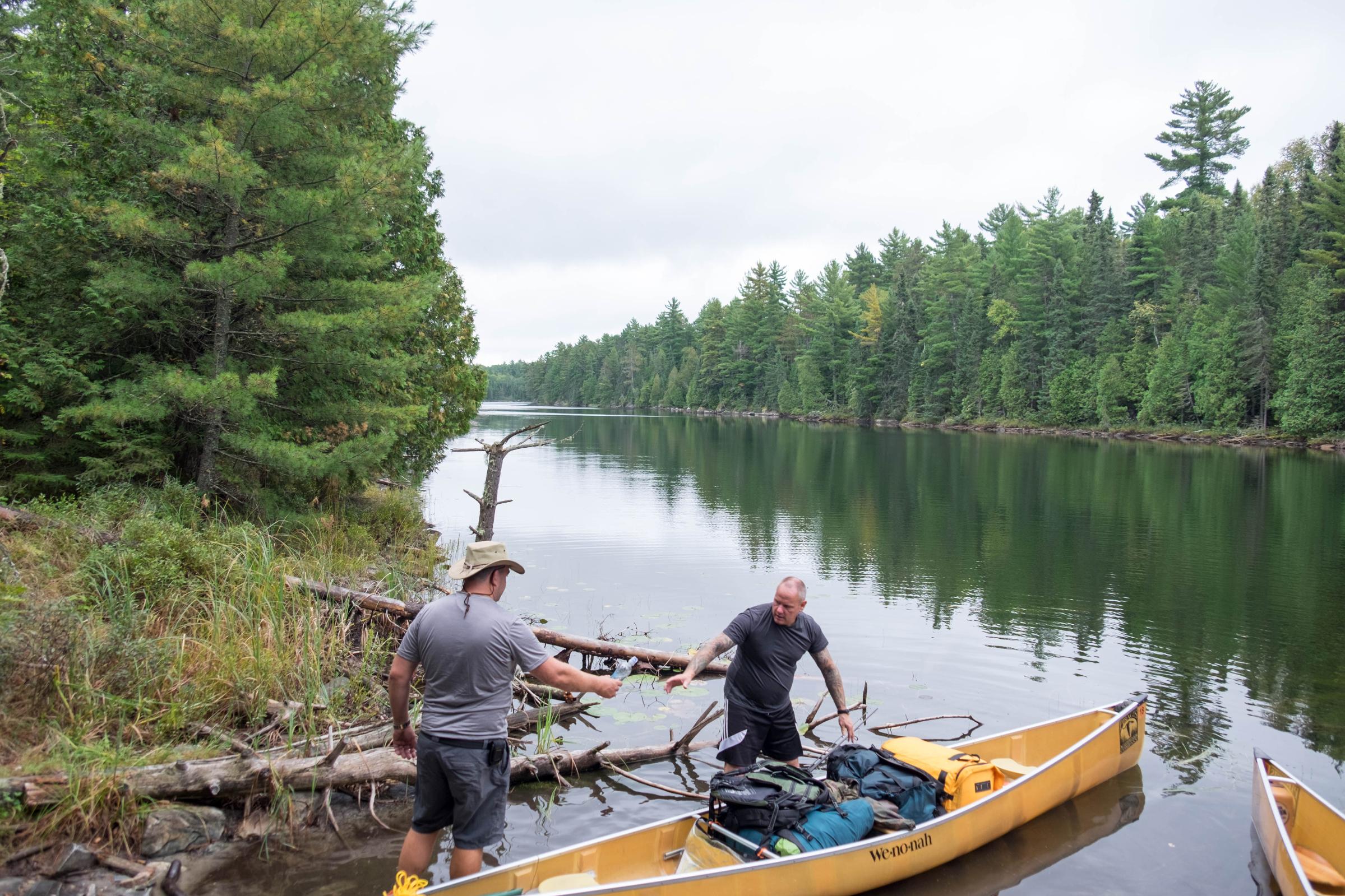 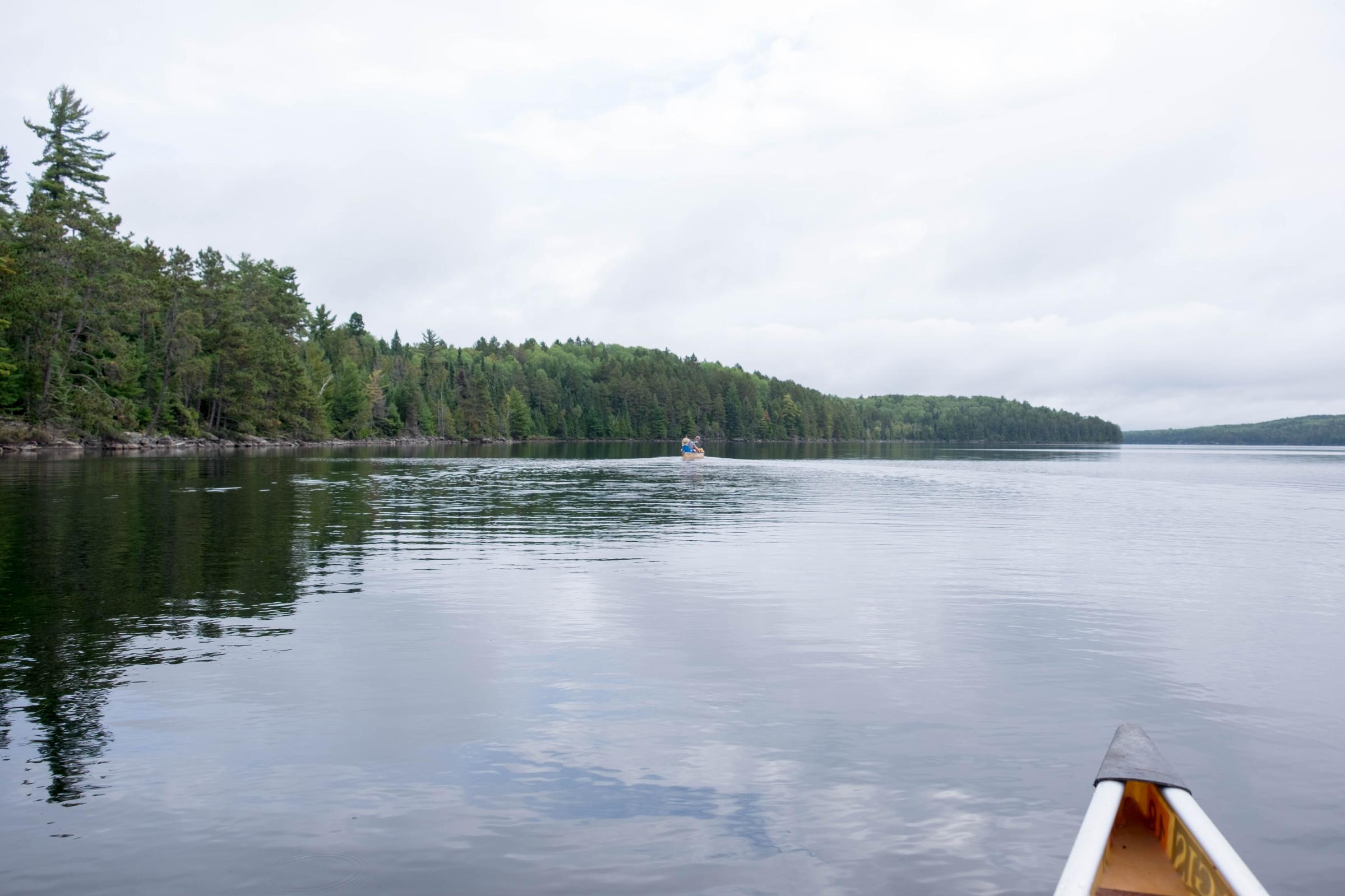 Yeh to Lonely Lake portage 1380mtrs through the swamp, 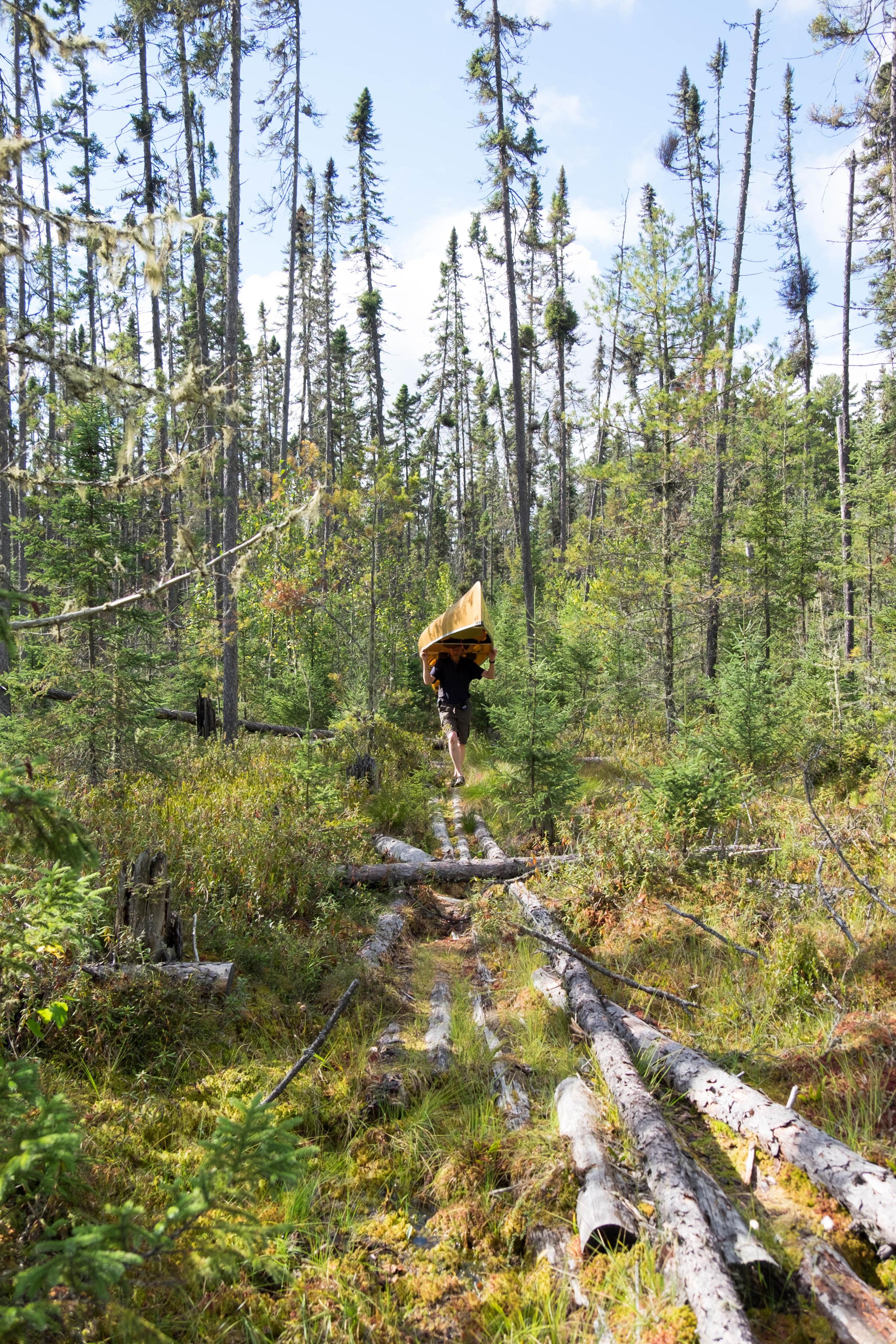 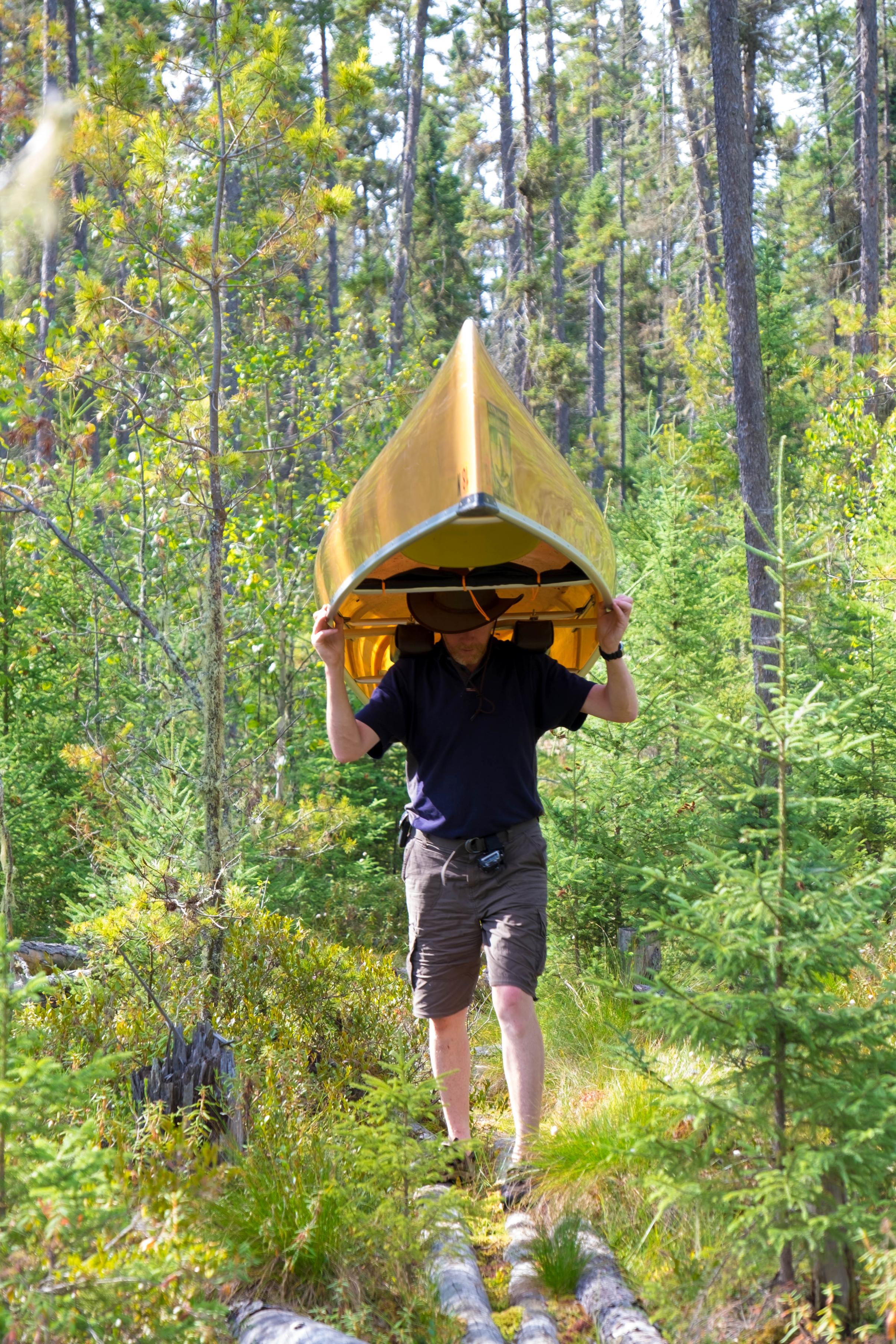 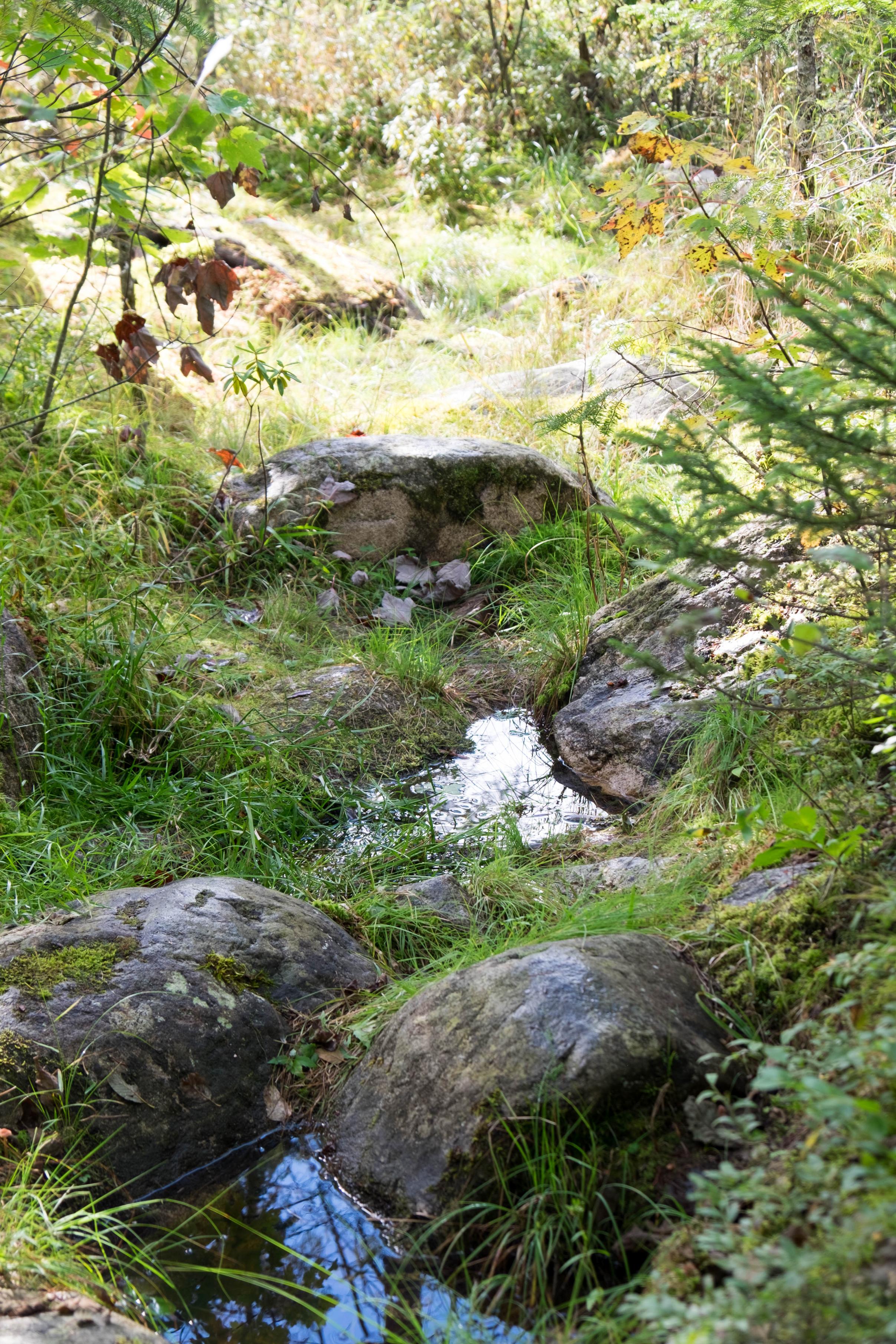