Ottertrack, Knife, and everything in between.
by Trapper7

Trip Type: Paddling Canoe
Entry Date: 09/19/2016
Entry & Exit Point: Moose Lake (EP 25)
Number of Days: 9
Group Size: 3
Trip Introduction:
Here it goes, my first trip report. My 2016 BWCA trip was many years in the making. To really grasp the significance of my trip, we have to go back to the early 70's on Knife Lake where my grandfather was one of Dorthoy's "angels". He helped her in the winter to construct and move the ice chunks that she used to keep her root beer cold throughout the summer months. (He is even in the video that you watch when you visit the Dorothy Molter museum) My dad talked about the few times he was with my grandpa at Dorothy's cabin drinking coffee on Knife Lake. I heard some of these stories throughout the years, but never showed much interest until more recently. My dad's last trip to Knife Lake was actually in 1978 when he took my pregnant mother up there. So technically, I had actually been to Knife Lake prior to my recent trip. They made the trip in an alumacraft with with a 3hp Evinrude on a homemade mounting bracket. 20 years later, I moved to Ely for college and used the same canoe for many trips to various parts of the BWCA, but never to Knife Lake. The closest I ever got to that area was when I worked a summer job pulling boats across the Prairie Portage by hand. I have had a lot of physically strenuous jobs throughout my life but this one took the cake. Fast Forward another 16 years and it was the August of 2014. My college buddy Luke P, two of his friends from Indiana, and I had just gotten back from a trip to Stuart Lake. That is when Luke P and I began making the plans for our Knife Lake trip. Those plans became reality when we purchased the permit in early 2015. The excitement of the trip consumed us. We spent countless hours researching maps, reading blogs, and gathering information from forums. I bought the Dorothy Molters books and read them. I read about Benny Ambrose and have come to admire him. (It would actually become the recurring theme of our eventual trip; "What would Benny do?" "Benny Ambrose wouldn't need salt and pepper on his fish" " Benny Ambrose didn't have a radio" I bet Benny didn't have a gravity water filtration system" You get the point.) July 6 was our scheduled entry date and we would exit on about July 14. As you all know, the anticipation of these trips is almost unbearable. Everything was going to plan until June 30 when a mailman pulled out in front of me in central MN as I was coming home from work. I broadsided him doing 65 mph. I didn't have any time to react. Thank goodness he survived. I had a severely broken femur. Luckily, they were able to save my leg. It took 4 surgeries and 17 months (Oct 2016) until they declared the bone fully healed. This of course ruined the 2015 Knife Lake trip and almost ruined the 2016 trip as well. When we rescheduled the 2016 trip, we purposely decided on a fall trip in order to give me more time to heal. We settled on Sept 19-27, 2016; over 2 years since the original planning of the trip. Had I consulted with my doctor and/or lawyer about the trip, I am certain they would have advised against it since my femur was not yet healed. There was an easy way to avoid this possibility. I didn't ask them. This leg wasn't stopping me again. Ottertrack or bust!
Discuss Trip: View Discussion Thread (6 messages)
Day 1 of 9
Monday, September 19, 2016 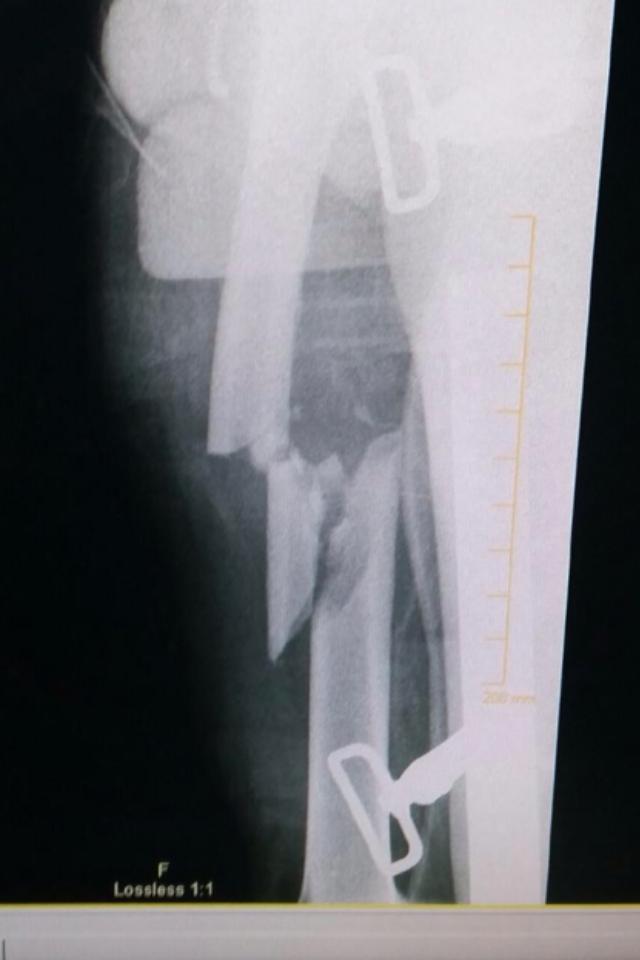 The broken leg wasn't going to prevent me from my long awaited Ottertrack/Knife trip 2 years in a row!

We met up at my cabin on Garden Lake the day before our entry date in order to make sure we had everything laid out and organized to fit in our 3 bags. One food bag, one gear bag, and one personal bag. We picked up a rented Wenonah Prism to go with Luke P's Souris River duralight since another college buddy, Luke S, got added to the roster. We got everything packed and loaded for an early departure. Stuffed hashbrowns at Britton's cafe started our Monday. We didn't even take the time to chew our food (I am sure we looked like rabid animals) as we had one thing on our mind for the day. We were going to make it to Ottertrack! We headed up the Fernberg Trail and were a little disappointed that the fall colors were just barely starting, but we were hopeful that they would progress throughout our trip (which they did not). We made it to Vosburgh's for our 7:30 tow. Ironically, our tow driver was the daughter of the owners of Wintergreen's in Ely. I trap beavers each fall in the Ely area and give my carcasses to the owners to feed to their sled dogs. Small world. It wasn't long and we were on the the other side of the Birch Lake portage getting our paddles wet. We had a map with but we had spent the past 2 years looking at our route, so we already knew every bay, portage and campsite location along the route. Maps, pfff, who needs maps. (I am just kidding of course. I would never go anywhere without a map) It was a beautiful sunny day but the wind was certainly picking up. Once we got to the less protected Knife Lake, that became very apparent as we watched the white caps roll. It didn't seem that bad when we pushed off the west shoreline of Knife Lake. We headed towards the Isle of Pines. I was in the solo, just a little bit ahead of the Lukes and as I was kind of looking for a spot that would be good to land, I nonchalantly turned my canoe in order to talk to talk to the guys and just like that, I was now swimming in Knife Lake. My initial reaction was to try to push the canoe back upright but when I did that it did nothing but push me under. I had my rubber boots on and my instinct was to kick them off. I kicked one off and then realized that they were not weighting me down so I just grabbed onto the capsized canoe and rode the waves to the nearby shore. Since we had everything bungee'd to the canoe and had waterproof packs, I only lost one boot and my camera didn't work for a few days. It was mostly it was my pride that was affected by the swamping. I believe the swamping was a good thing because it gave me a little more respect for the solo canoe. I have paddling 100's of hours in a tandem but only a few other times in a solo. I was definitely not prepared for the instability of a loaded solo. One would think that at this point we had learned our lesson, right? No. We were going to Ottertrack. I kind of felt that each of us was thinking we should hold up because of the wind, but nobody wanted to be the one to make the call. Especially not me at this point. After a little exploring and a quick sandwich, we were on our way. As we flew across Knife with the wind to our backs we saw other canoe parties landed on shore. We couldn't see their faces, and if they were yelling at us, we couldn't hear them through the howling wind and crashing waves, but I heard their thoughts loud and clear; "What the hell are you guys doing out there?!?!" There was times I would ride the wave, going so fast that the stroke of the paddle was basically going as fast as I was! We should NOT have been out there! (I looked back at the weather for that day and they recorded 40 mph gusts) We pressed on, making sure to stay as close to shore as possible in case of another swamping. When we got to the narrows past Thunder Point we stopped for a well deserved break at campsite 1998. It wasn't the greatest campsite but kind of neat because it was mostly small cedar trees there. We rested for about an hour and then decided to push on. At 4:00 pm we were on Ottertrack! We stayed at campsite 2002. It was a nice site and the 3 of us had no problem finding a spot to set camp. Luke S and I had hammocks, while Luke P had a rain fly and sleeping pad. Sitting by the campfire after our wild day was absolutely incredible. I had waited over 2 years for this moment. We watched the northern lights in awe and listened to the grumbling of bears across the lake on the Canada side. 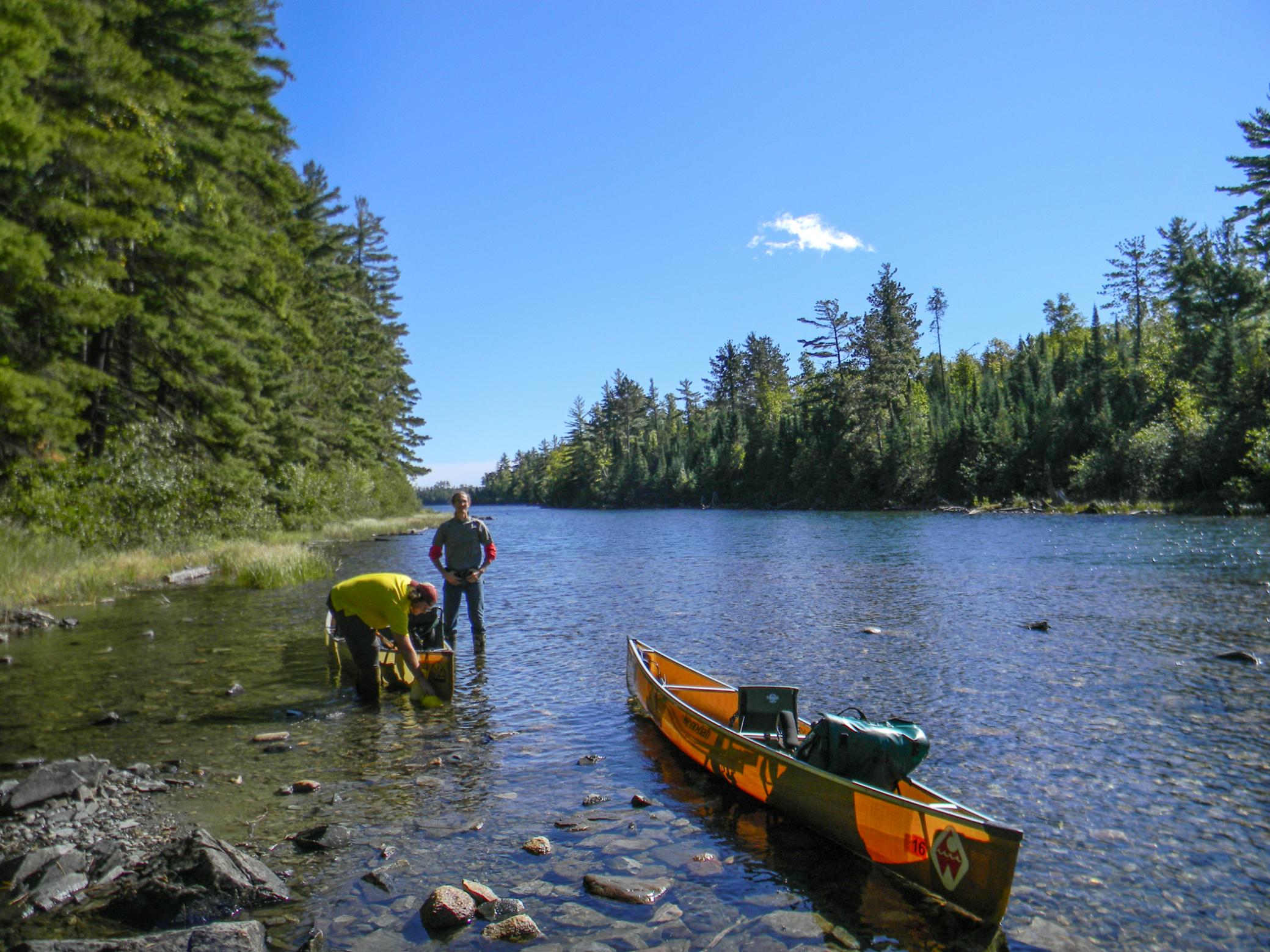 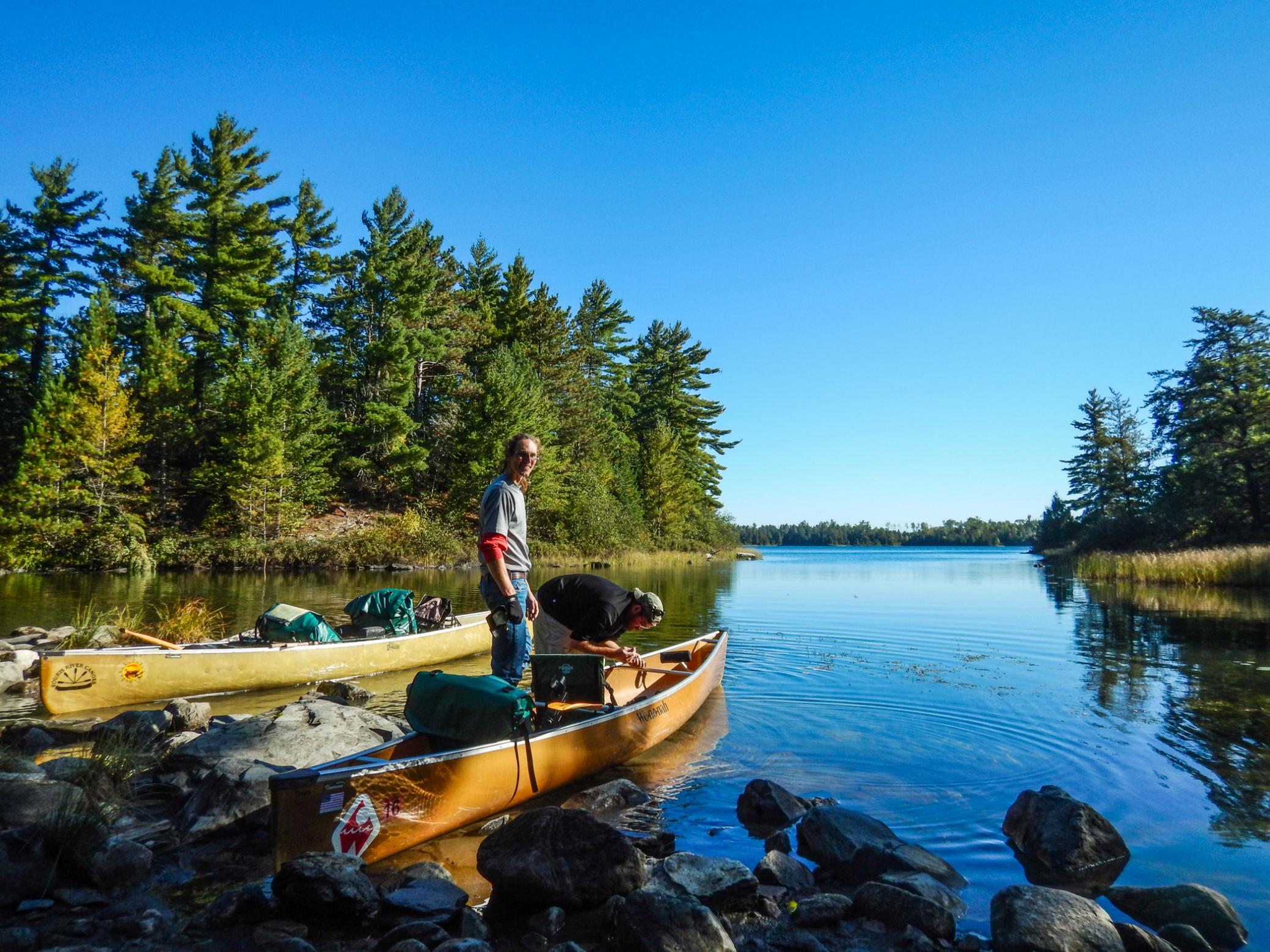 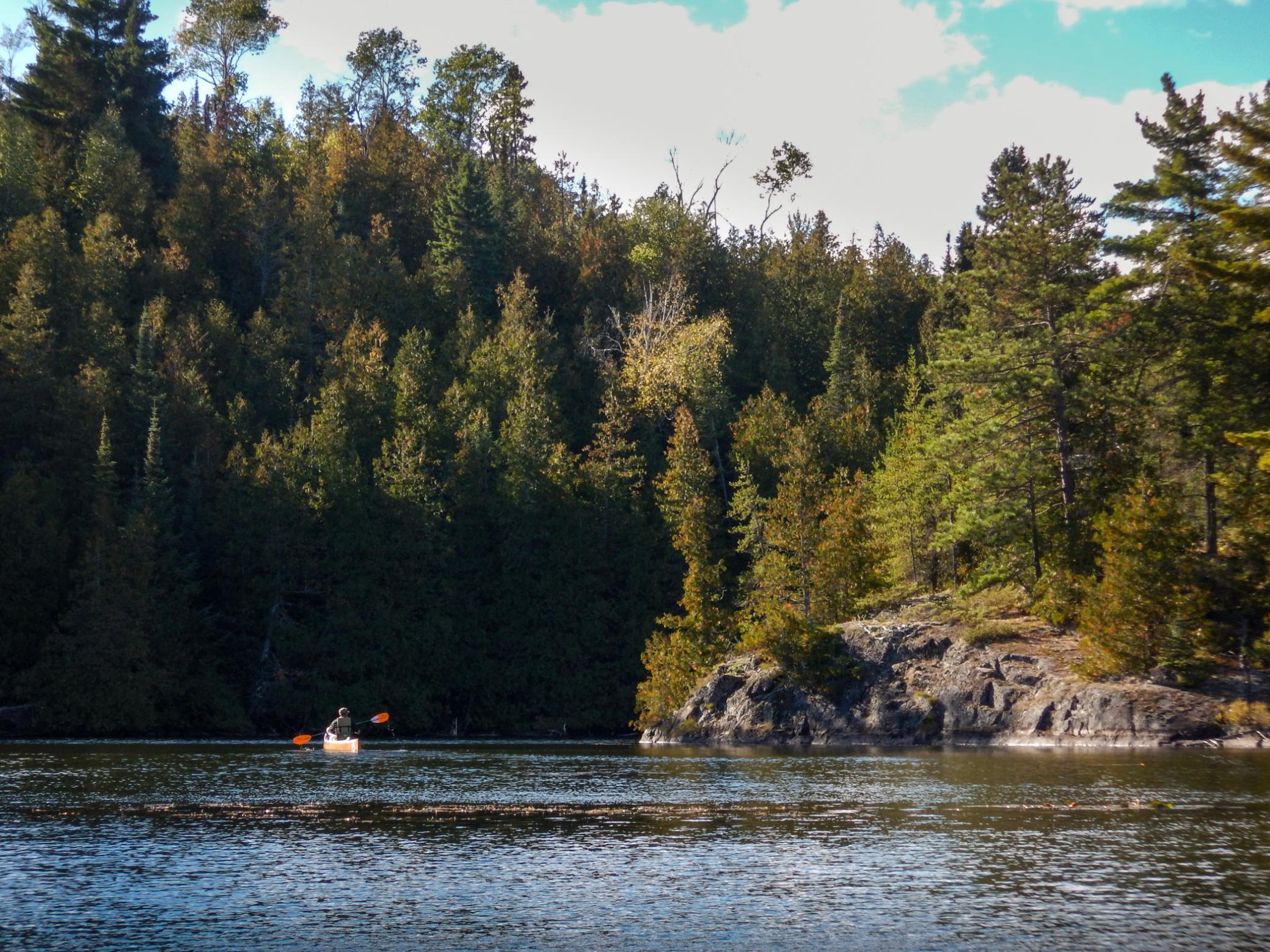