Stuart River Loop June 2017- me and my wife
by GopherAdventure

Trip Type: Paddling Canoe
Entry Date: 06/14/2017
Entry Point: Stuart River (EP 19)
Exit Point: Moose/Portage River (north) (EP 16)
Number of Days: 4
Group Size: 2
Trip Introduction:
My wife of 9 years and I wanted a vacation just the two of us, no kids, so we marked the calendar and decided on a Boundary Waters trip up the Stuart River. Our goals for the trip included some relaxation time, sightseeing some waterfalls and wildlife , stargazing, and fishing. We stopped in Duluth to pickup the permit, then headed up to Ely to visit Insula for dinner, VNO for bait and then on to the Echo Trail. I will also be attaching a video report of the trip here and on YouTube (under username "anthonyp007") once I've completed it. Thanks for reading.
Discuss Trip: View Discussion Thread (16 messages)
Day 1 of 4
Wednesday, June 14, 2017

We slept in the truck on a couple of the kids sleeping pads the night before our entry so that we can get an early start. It's something I like to do since I rarely sleep much the night before a trip, but it was a first for my wife and she seemed to get more sleep than I did, so it worked out well. With that said, a huge storm barreled through in the middle of the night in multiple waves of torrential rainfall, lightning and thunder. I was really happy not to be out in a tent for that one.

The storm from last night left us with a wet morning. We woke, pulled the canoe and gear off/out of the truck and Sara took the truck and drove over to the Moose River EP to drop it off and bike back. While she did that I started the 480 rod portage with the gear hoping to be almost done by the time she got back. Well, the trail was really sloppy from all the rain, but nothing too bad at all until I got down to where you cross the stream that's located just below a beaver pond. In all the trip reports I've read, this stream is supposed to be something you can easily cross when the water's low and one that you can walk across some downed birch trees when the water's high, but today this stream was a raging rapids. I stared at it for a few minutes looking left and right to see if there was another way around because the stream was running so hard that the two small trees laid across were practically under the rushing water. I'm not sure if the pond above this area had a beaver dam that gave way from all of the rain from last night, or if it was just raging from the rainfall and high water levels in general, but I didn't know how we would get across. I looked for spots to maybe float the canoe across with gear, but there was only one possible spot for that and we'd still need someone on the other side to make it happen.

I started back for the last packs and about a 1/4 mile up the trail I ran into my wife, double packing it with the food pack and small backpack. This was the first of many indicators I had on this trip of how much of a badass my wife is in the wilderness. I took that backpack from her and explained the predicament ahead and we hiked to the "raging creek" together. Once we got there, she assessed the situation like I did and came to the same conclusion... someone has to get across. So she threw on her pfd and proceeded to cross the downed trees through the raging rapids. I watched with a degree of nervousness as her boots dipped below the strong current as the trees tried to support her and the current at the same time, but she kept on moving and made it across without incident and said, "it's not bad at all". So I through on the food pack and started across, but with my weight and the weight of the pack the branches sank down deeper in the rapids, I made it across, but going back would be even tougher. Sara decided she'd do it again, but this time the current got her and she fell about halfway in, soaked, but not pinned or anything, she climbed out and we decided to float the canoe across with the resort of the gear a few feet upstream away from the rocks. We angled the Northstar so the bow was pointing at an angle and I stood upstream farther from Sara and she was able to shove the boat across to me and we got everything across. Now Sara had to cross the rapids for the third time and she made it without incident. The rest of the portage was a walk in the park and we were able to put in early at Swamp Creek because the water was so high. This cut out the last 30-40 rods of portaging. The Stuart River is gorgeous. It's wide open immediately and you can see for quite a ways around you, which is much different than the Moose River EP and I appreciated it immensely. We were so excited to be on the river heading towards Stuart Lake. Even though the "raging creek" set us back about an hour, it was still only 8ish by the time were were paddling so I knew we had lots of the day left to enjoy ourselves. The rest of the portages along the way were easy and we only had to carrry down one beaver dam before we got the the last portage into Stuart Lake. The time was only 11:30 and we were almost to our destination for the day. We crossed the portage into Stuart and it is a thing of beauty, paddling a river all day and being greeted by a vast lake, with a majestic waterfall at your side is my idea of a vacation. We hung around the bottom of the falls taking some pics and resting a bit before we headed out to find a campsite. Note: there was a nice looking medium action spinning combo just sitting at the bottom of the portage that someone must have left there, we left it thinking that person would be back. Hopefully they came back for their gear. I had read great stuff about the NW campsite so we started paddling and planned on checking the island site on our way by because I'd heard good stuff about that site too. The island was empty, but we paddled on and the NW site was occupied so we headed back to the island. Sara loved this site and so did I, the bugs weren't bad because we had a strange easterly wind today blowing right into camp. We lounged around and I fished from shore for the rest of the afternoon and we had campfire pizza for dinner. It was awesome. A great end to a great day. 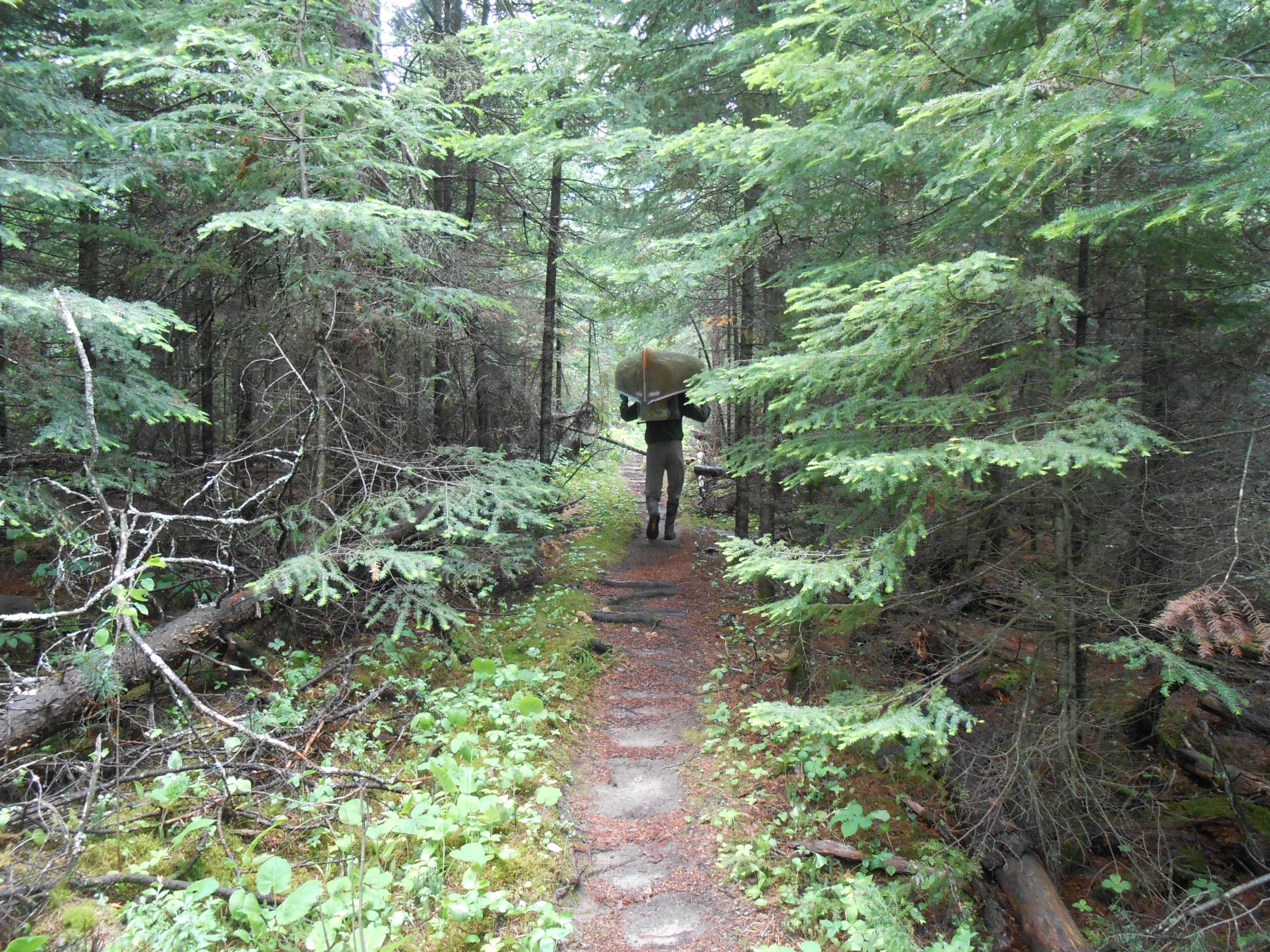 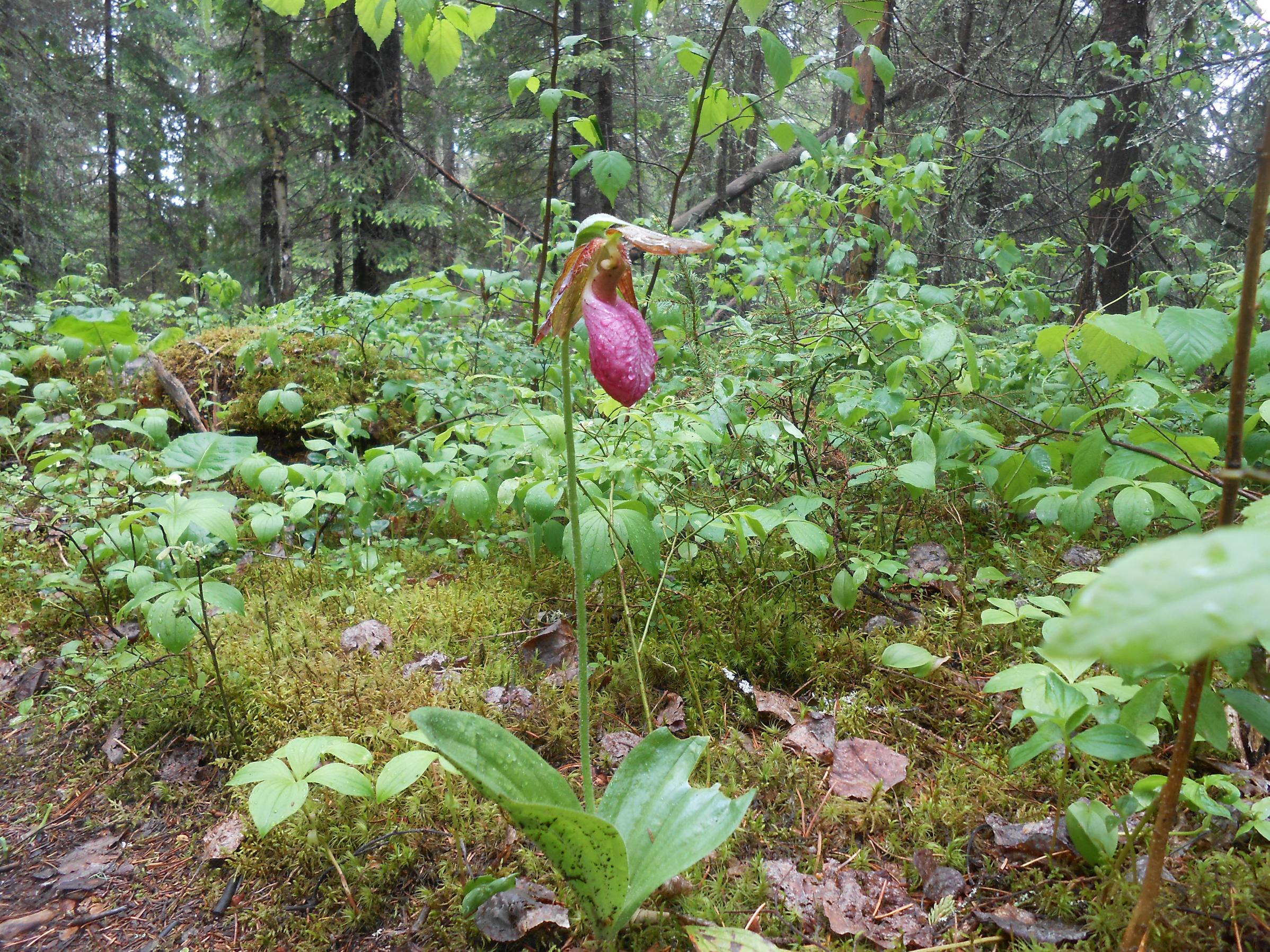 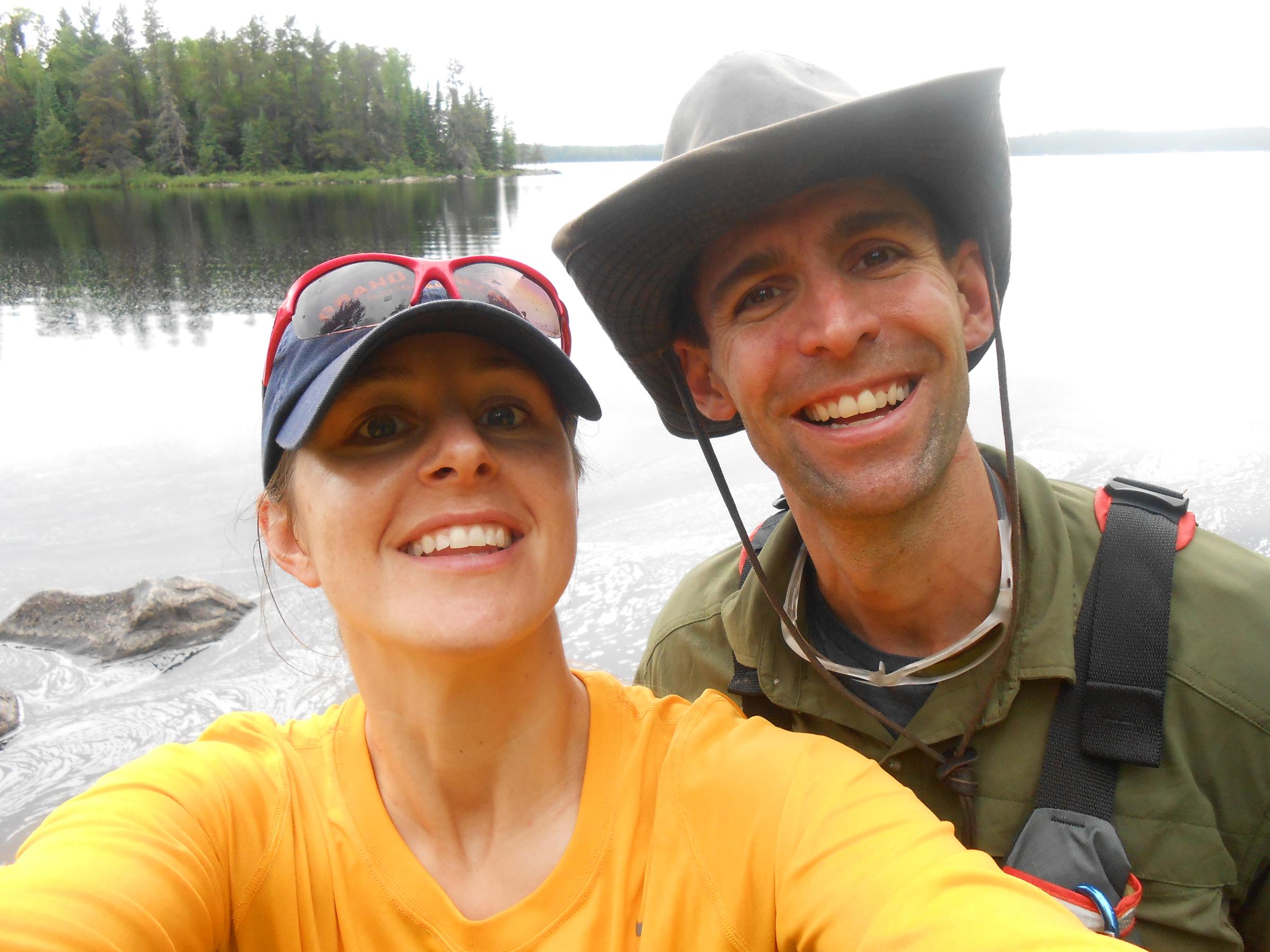 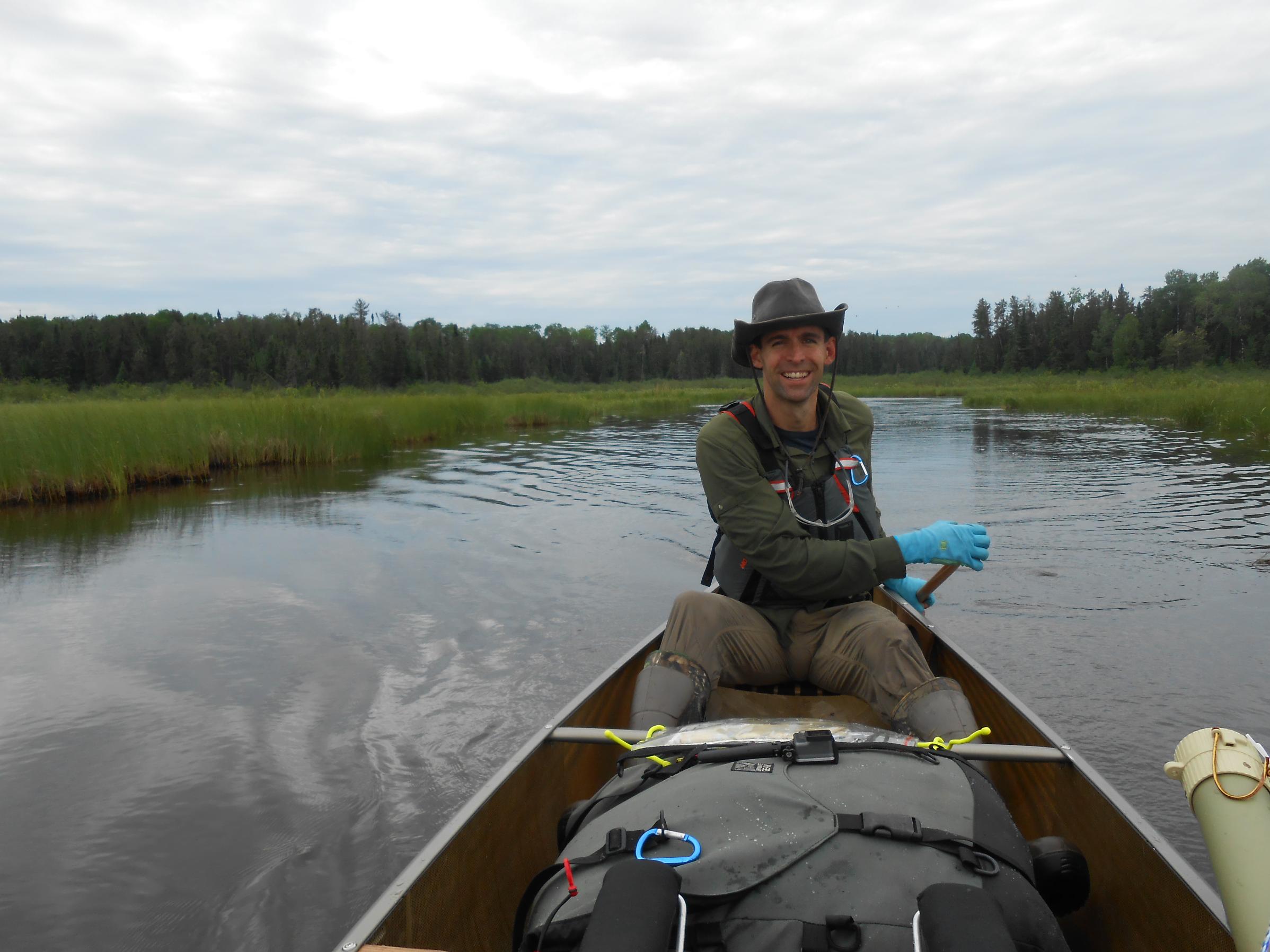 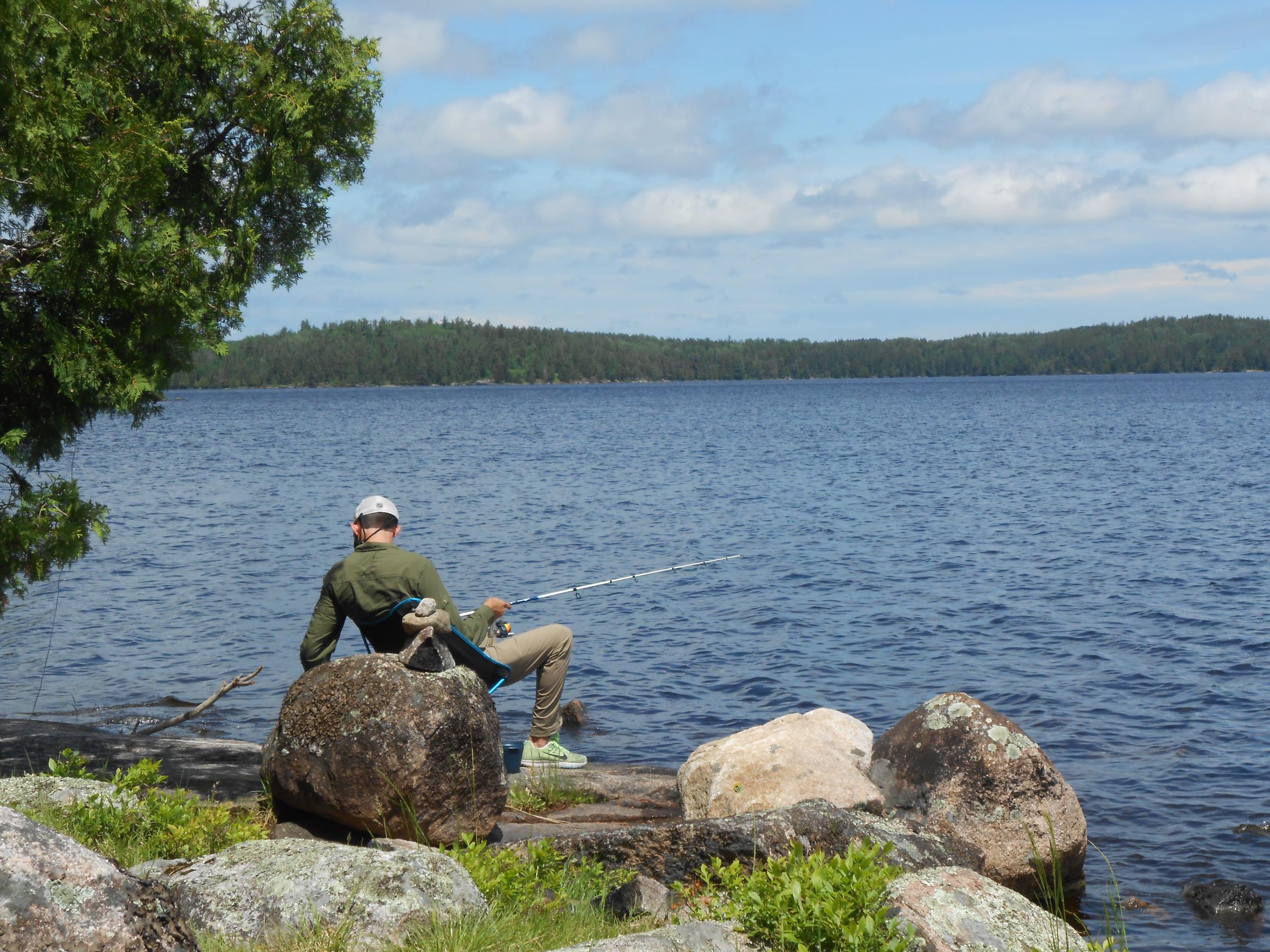 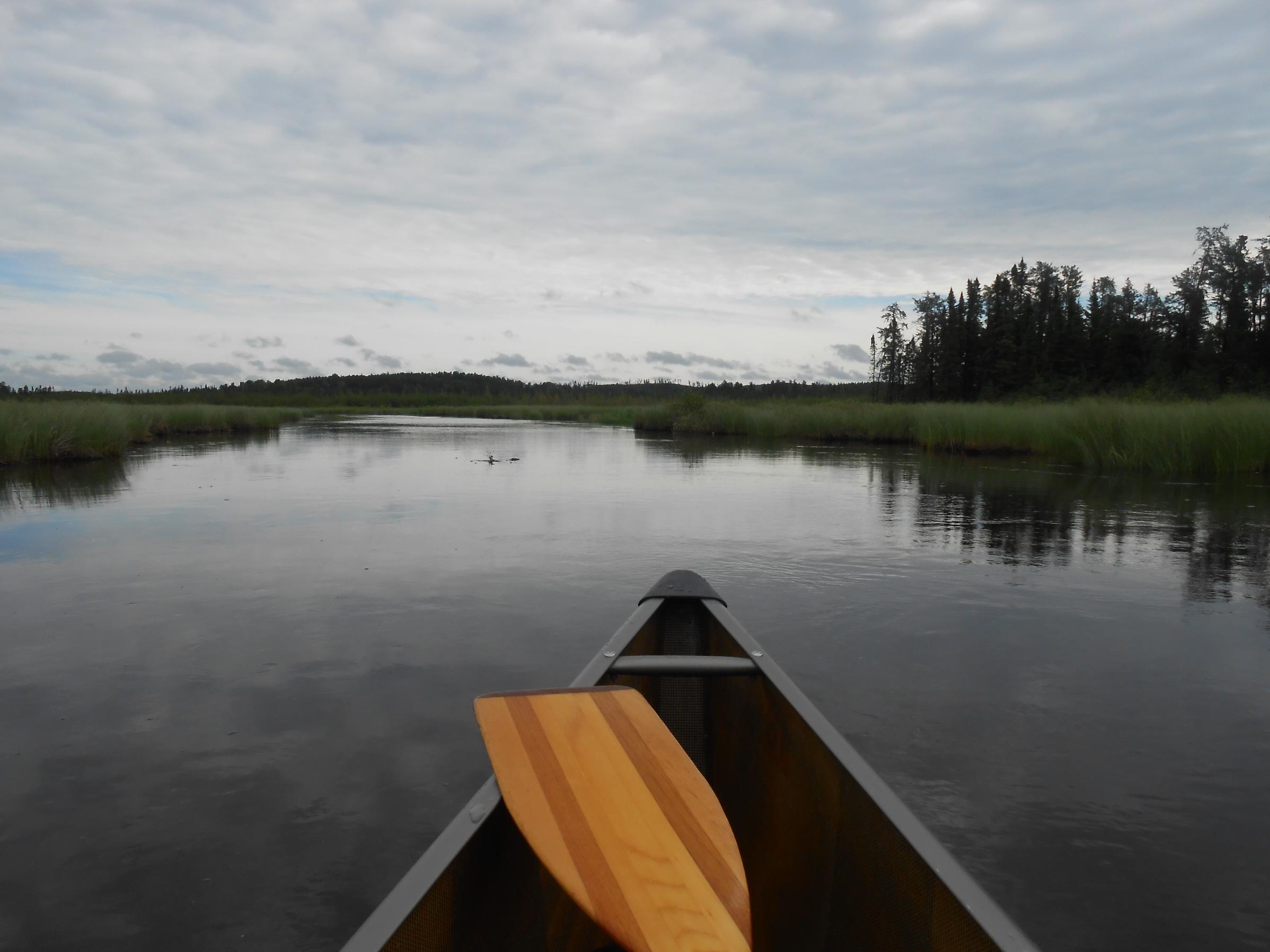