May 13, 2006. Breakfast was at Brittans – “potion sizes out of control… with an offer for donuts to go”. Our waitress sounded like Marge from “Fargo”.

We drove to the tow service at Moose Lake. There was a literal cloud of flying mosquitoes at the landing – none of which were biting. This hardly seemed fair since the snow ended only hours earlier!

Another couple of guys were loading up at the same time – their gear kit resembled a Northwoods garage sale. There may have been a couple of packs buried in there, but all I could see was loose stuff in their tow boat. They were planning to base camp on Ensign (Thank heavens – they were looking at at least four trips over a portage!)

Our outboard stumbled in the cold morning weather as we floated back from the floating dock. I clicked on my GPS. After a few minutes of fumbling the motor caught and we were bouncing our way quickly up to Birch Lake and our jumping off point.

Thirty minutes or so later we glided into shore and I encountered my first problem of note. Gena absolutely would not get his feet wet – it was like watching the Russian Ballet whenever he got out of or into a canoe. In his mind no sane person would EVER, EVER, EVER get their boots wet deliberately. The only redeeming factor is that he was pretty graceful in his maneuverings. I was wearing my wet footing Quetico Trekker boots with the Brookie liners and was well insulated against the icy cold, so I wound up in the water much of the time at portages.

Gena’s aversion to wet feet was more than offset by his prowess as a bow man and his ability to portage. After a few minutes instruction on form he was quickly leaving me in his wake as we paddled into the misty morning. 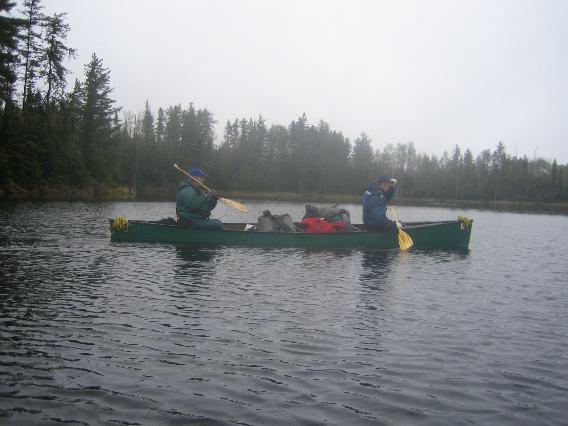 The temps struggled up into the low 50’s by the time we worked our way thru the portages to Knife. The new GPS I purchased sat with Steve in the stern seat of the tandem, while I paddled my stripper solo – and produced hilarious results whenever we ventured into Canadian waters (I haven’t purchased the Canadian software yet) – we kinda entered a twilight zone of a featureless cross hatched grid. Add to this Steve’s unfamiliarity with this new device and we did take a few serious wrong turns in the first miles.

A series of portages later, we finally arrived at Knife and grabbed a campsite close to Dorothy’s Isle of Pines island.

Gena observed that he’d forgotten how “clean air made him smile”.

Spring is busting out with a vengeance – bushes are abloom – the bull frogs are in full throat – and the Loons are on their shoreline nests. And there were virtually no bugs this Saturday afternoon.

Camp was set under cloudy skies and stable temps. We grabbed a late lunch and rigged our poles. Steve and Gena set out in the tandem – with Steve gently teaching Gena the nuances of trolling, casting and lures. It turns out the Russian idea of fishing consists of finding worms under bushes and setting out a bobber. Steve had an interesting job, which started with explaining that a spinning reel goes on the bottom, not the top of the rod.

Their initial foray was unsuccessful, by the time they returned, I had a fire built and beef filets ready to go with sides of mashed potatoes and corn.

The post meal stupor was offset by generous servings of Russian tea, which would wake anyone up! Gena and I went out in the gathering dusk after I lit my shoreline candle. I was planning on showing him how to catch a Smallie – American style with a noisy buzz bait ripped across the calm surface.. I didn’t even get a strike in 90 minutes of shoreline paddling. We paddled back in pitch darkness, our path illuminated by the glow of my candle on shore.

A disappointing, but not unusual, opening day!