October Adventures in Paradise
by hawleycanoeguy

Trip Type: Paddling Canoe
Entry Date: 10/20/2010
Entry & Exit Point: Mudro Lake (EP 23)
Number of Days: 5
Group Size: 6
Trip Introduction:
This is a few YEARS late, but I'd posted this on the Canoe Country Bulletin Board years ago, not really knowing much about this one. In anticipation of my next trip coming up in a couple of weeks through the same entry point, I wanted to go down memory lane, read by report, and share it with you all.
Discuss Trip: View Discussion Thread (5 messages)
Day 1 of 5
Wednesday, October 20, 2010

There was much anticipation for this venture to the BWCA. Since I'm a teacher, I wanted to plan a trip during the MEA weekend to take advantage of my "extra" days off. Finding people to go considering the time of the year proved to be easier than I thought. When it was all said and done, we had a group of six sharing three canoes. With ages in parenthesis, the party included my dad (56), brother Ben (35), brother Jacob (21), nephew Chris (12), a family friend named Jeff (52), and myself (30).

I kind of felt a lot of pressure, because it was me who decided when and where we were going (I was honored to have this responsibility). We decided to enter through the Mudro Lake EP, a new area for all of us. After doing much reading in Pauly's book and the Breymer books, the Mudro-Horse Lake area sounded like a great place to visit. After looking on the CCBB boards and getting great advice, I knew this is where I wanted to go!

The week earlier, my dad and Jacob hit up the Dilworth, MN, Wal-Mart to buy food/misc. supplies for the trip. We thought it'd be fun to buy as many "Great Value" branded items as possible (I know...we're easily entertained). We were just curious if the store-brand stuff is as good as the name-brand stuff. We had a blast planning our meals, figuring out how much we needed, and getting it all packed up.

My dad packed all the food/clothes/tents/sleeping bags/etc all on his own the weekend before we left! (Thanks, Dad). He has collected a potpurri of packs over the years, but it's all been tried and true in the BWCA. We've never had issues with anything he's packed up!

We all live in Hawley, MN, which is 20 miles east of Fargo, ND. We packed everything up at 5 PM on Wednesday, the 20th, and left for Ely! Ben drove his Tahoe and Jeff took his Suburban. Jeff carried 2 canoes, while Ben had 1 strapped to the top. We went through the Taco John's drive-thru in Detroit Lakes for a quick supper. Everything went well until we got to the Tower area. Following Jeff, he took a right off of 169 onto some other road because of a detour, but we ended up in Babbitt! Both vehicles even had GPS...we were listening to music in the Tahoe and got sidetracked--never did find out why Jeff/Dad took their wrong turn. Ooops....we regrouped and managed to arrive in Ely through the east side of town shortly after 10:30 PM.

We rented a big room at the Adventure Inn (4 double beds). It was nice to get out of the rigs after a long drive. We all visited until about 12:30 before we finally called it a night, as the Weather Channel on the TV was left on through the night. I like how the Weather Channel in Ely still uses the really old graphics/radar for the Locals on the 8s !!! LOL!!!....we heard that snow was a possibility Thursday morning....would the ground be white in the morning?? 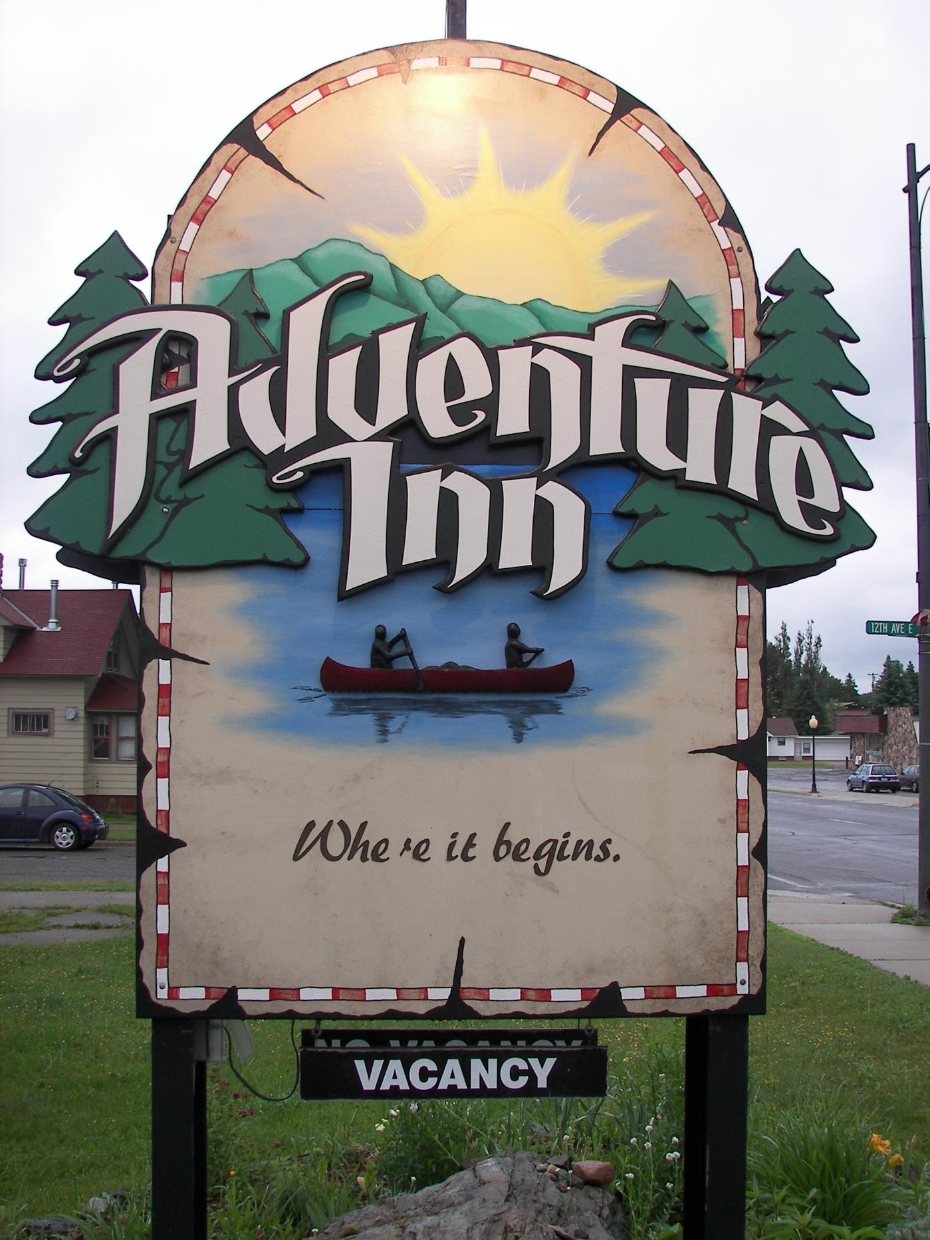