I apologize, but this report is not written for you. I wanted to get my thoughts and experiences recorded before the details faded. Every night of this trip, I dictated a one-minute summary of the day’s events as an iphone memo. This is the expansion of that summary combined with my real-time and retrospective thoughts. It was a lot of fun to write; to be forced to replay the details in my head as the lakes outside begin to freeze over. So it is a personal project that ended up being quite lengthy- not at all my preferred trip-reporting style, a length of which I have not written since grad school. I have no photos of my own- only annotated maps and a few photos from others. While the intended audience is me, the few people I have shared it with have convinced me it should be made public in the places where I find inspiration for such things. It is true that I enjoy reading the reports of others, which often provides fodder for dreaming of my own adventures. With that, here is an account -from my sole perspective- of the 2017 Kruger Challenge.
Discuss Trip: View Discussion Thread (23 messages)
Part 1 of 10
I had read about this route a few years ago, and have since had it on the ‘maybe sometime’ list: the historic border route from International Falls through Voyageurs National Park, the BWCA, and the Pigeon River/Grand Portage to finish at Lake Superior. This was the route the French Voyageurs and natives traveled to the North American interior during the fur trade of the 1700’s. It is mostly water travel connected by portages, and was important enough to eventually define the international border between Minnesota and Ontario. Today, it is a classic route that many canoeists have paddled. The trip takes a couple weeks though, and would be difficult for anyone like me with a job and a family to find time for. I read a report, however, from one guy had pushed to do it solo in 9 days and that seemed much more manageable- the solo aspect is something I enjoy too. 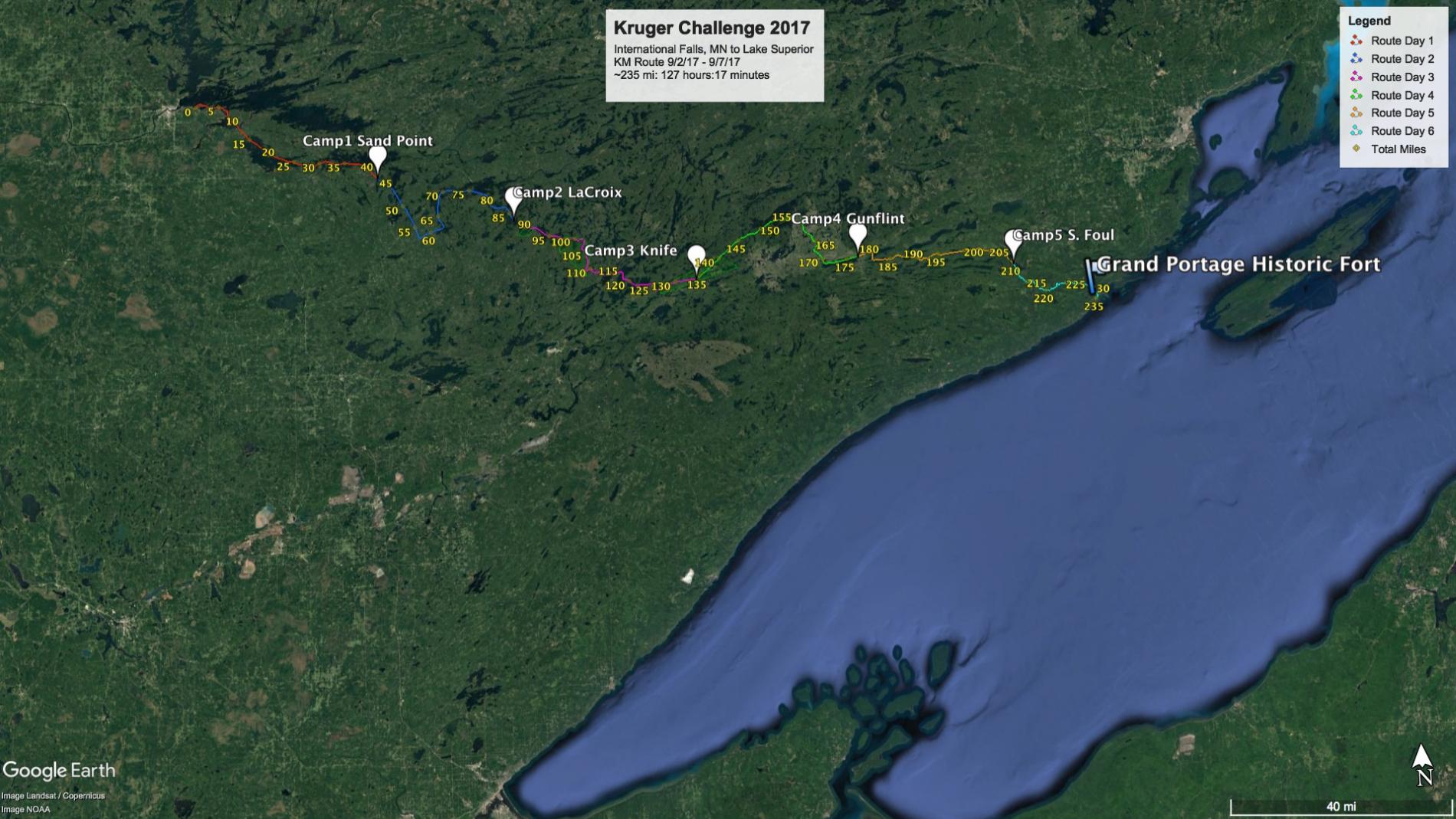 The past two years an endurance paddle sports organization called Watertribe had put together a 1-week challenge to do the route: They are best known for a few big 300 mile events in Florida. The idea is that the time limit of 1 week makes it less of a paddle-tour and more of a challenging endurance event. The guy who puts it together runs it as a small business and single-handedly collects all the fees and makes all the decisions about the course, rules, entry criteria, required equipment, and so on. (mostly necessary steps to protect safety and liability of the great number of people involved, i imagine). Lurking on their website, the events looked like fun, but with very strict rules that seemed to change at the whim of the one guy. I trolled along- following the first two Voyageurs’ Challenges in 2015 and ‘16 that went 200mi from Crane Lake on the Western edge of the BWCA to Lake Superior. Participation was paltry compared to the Florida events, and the frequent portaging common to northern canoe travel seemed to be something that most of the saltwater competitors weren’t used to. Over the two years, 4 teams and 3 soloists had attempted the challenge. Only 3 teams and no soloists had ever finished. So yeah, I guess it is pretty tough.

This past winter, they had again announced a 2017 challenge. I was interested, and considered joining the group to give it a shot. Alas, I balked at the required equipment lists and rules and entry fees of the Watertribe. My stubbornness (and maybe a little bit of a subversive attitude) got in the way and I reasoned that I could just go do the route on my own terms whenever I wanted. The strictly organized event just wasn’t my cup of tea.

Now, my main athletic passion is XC skiing in the winter; and in late February my favorite ski marathon was canceled due to lack of snow. I had trained very hard the past year and would have by far bested a personal record for the race. So while I was in excellent shape, I may have been a bit depressed going into the spring months without an athletic goal.

Around that time, I saw a post on a canoe-enthusiast internet message board from a guy by the screen name BeaV. [Now BeaV is somewhat of a legend around the North-American canoe-world: The biggest trip on his resume is an 8 month, 5000 mile paddle up the inside passage to, through, and around Alaska. This was all solo, without sponsors- just because he wanted to do it. Also, BeaV is a Watertribe member and was on one of the finishing teams in each of the first two years of the BWCA Voyageurs challenge. ]   Anyway, the post was an open invitation to join the fall 2017 Voyageurs Challenge. The leader of Watertribe had decided to cancel the event this year and instead BeaV was going to try and scrap it together himself to see if anybody else wanted to share rides and do it anyway. In addition, he would add 62 miles to the 200 mile route and make the start on the west side of Voyageurs National Park in International Falls. No formal rules, no formal route, no entry fee, no liability waivers. Just paddle from Int’l Falls to Lake Superior, without outside assistance. If you finish in less than 8 days, BeaV would buy you a beer. If not, the shuttle would leave and your adventure would continue by having to find your own way home. Suddenly, this challenge had a wild and underground appeal that was calling my name. I had to do it: I was in.

I think the part I secretly enjoyed the most was the uncertainty as to whether or not I would actually be able to finish in 8 days. I honestly didn’t know if I could- and would thus have to battle insidious thoughts of self-doubt from February all the way to Lake Superior. The stats were against me: No soloist had ever finished the 200mile; and this was even further. The most I had ever paddled in a day was about 16 miles. The longest I had ever been out solo was 4 days. I have never been on 97% of this route, and did not have experience paddling big open water crossings. I know nutrition planning for a 5-hour endurance race, but not 8 consecutive days of race-recovery. Many facets of this challenge were unknown territory for me, and the doubt was all around. While it certainly comes with some fear and anxiety, my secret superpower that this kind of thing can sometimes drive my motivation better than anything else. It seems a little cliché, but a true personal challenge really does bring out the best in me.

I have to credit my wife: the next hurdle was asking her if I could take this on, and I was nervous it might be a hard sell. Not only would she get to worry about me, but she would also be relegated to her own challenge of singlehandedly managing our preschoolers the week while I was gone. I remember telling her of the organizational change and how my interest in the event had suddenly become serious. I have forgotten her exact words, but it was something like, “Well you’d better start training”. Sometimes I wonder how exactly my crazy plans are perceived by others, but she knows me well, and understands my needs more than anyone else. Even if she had her own doubts, her outward support was 100%. 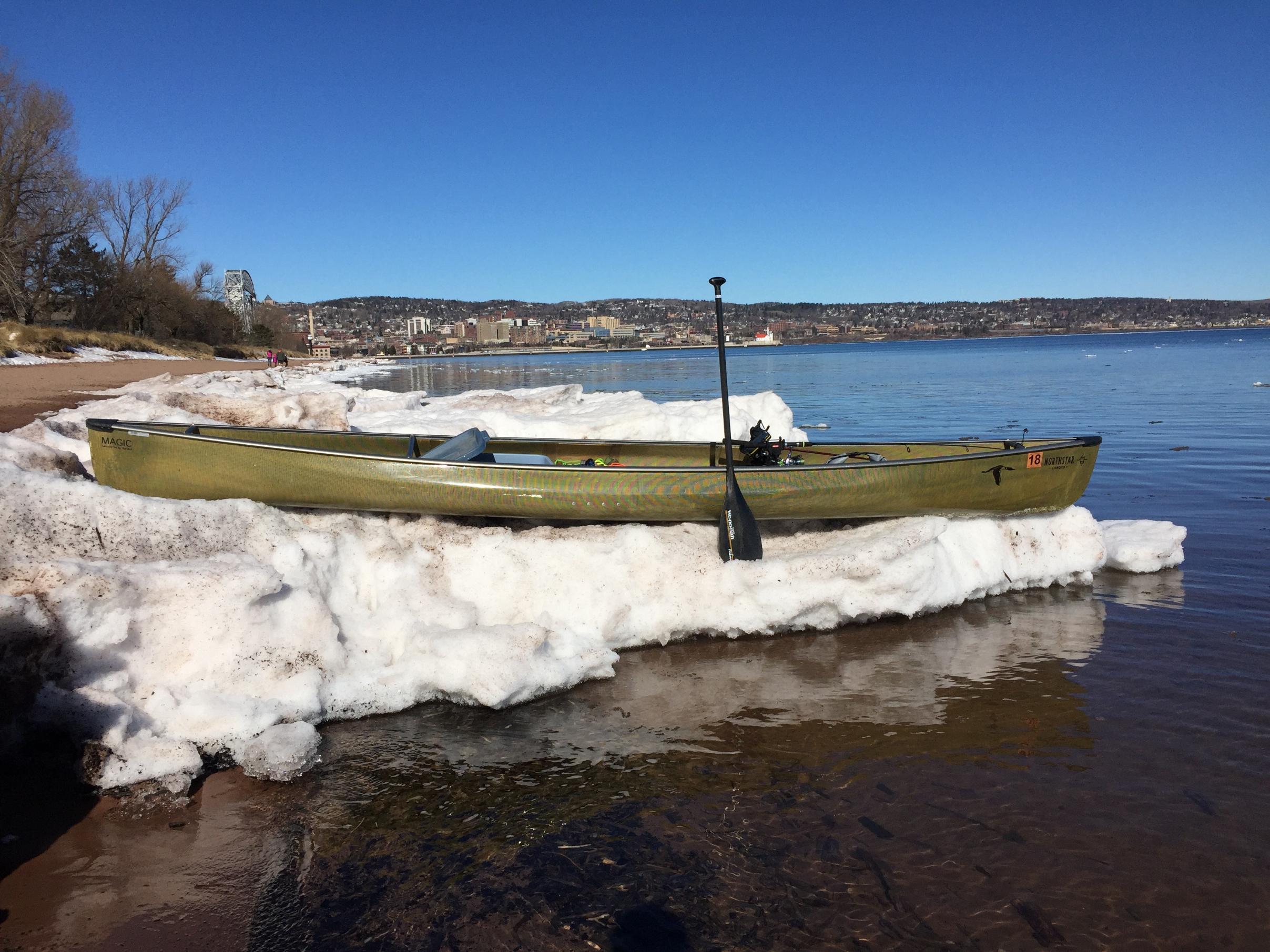 Even before the local lakes melted their ice, I was out paddling- driving early morning to the cold (but ice-free) water of Lake Superior to paddle calm sunrises and fish for salmon. I kept my conditioning from the stunted ski season through the spring and summer with daily workouts, including 2-3 paddles each week. I live .6mi (200 rods) from the Mississippi, and the neighbors all got used to seeing “canoe guy” portaging the boat to and from the river. 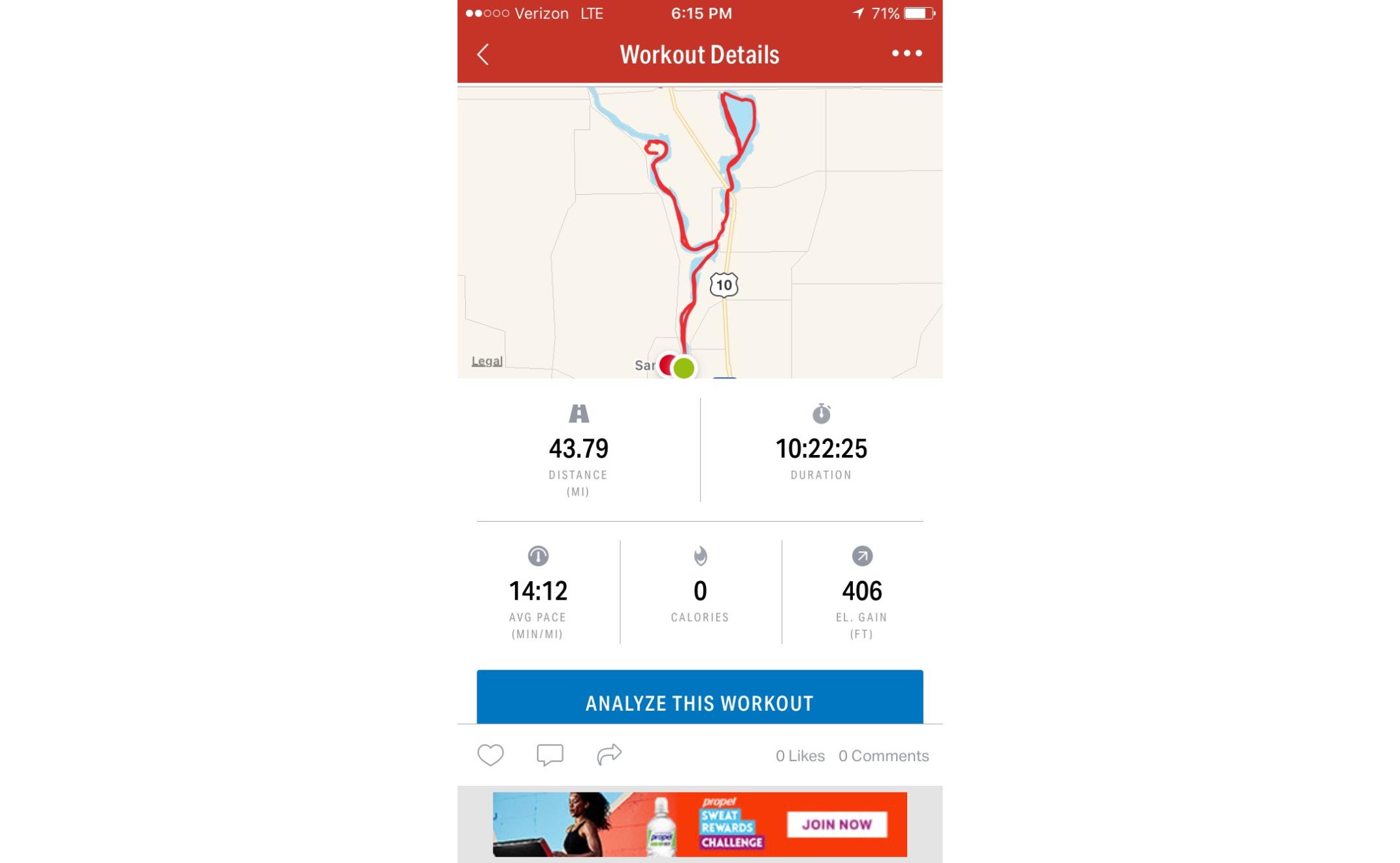 I kept besting my personal record for most miles paddled in a day, all the way up to some long days of 45+ miles. I also included multi-day back-to-back-to-back distance workouts to practice managing fatigue and recovery, while working out the riddles of nutrition, portage logistics, and preferred gear. 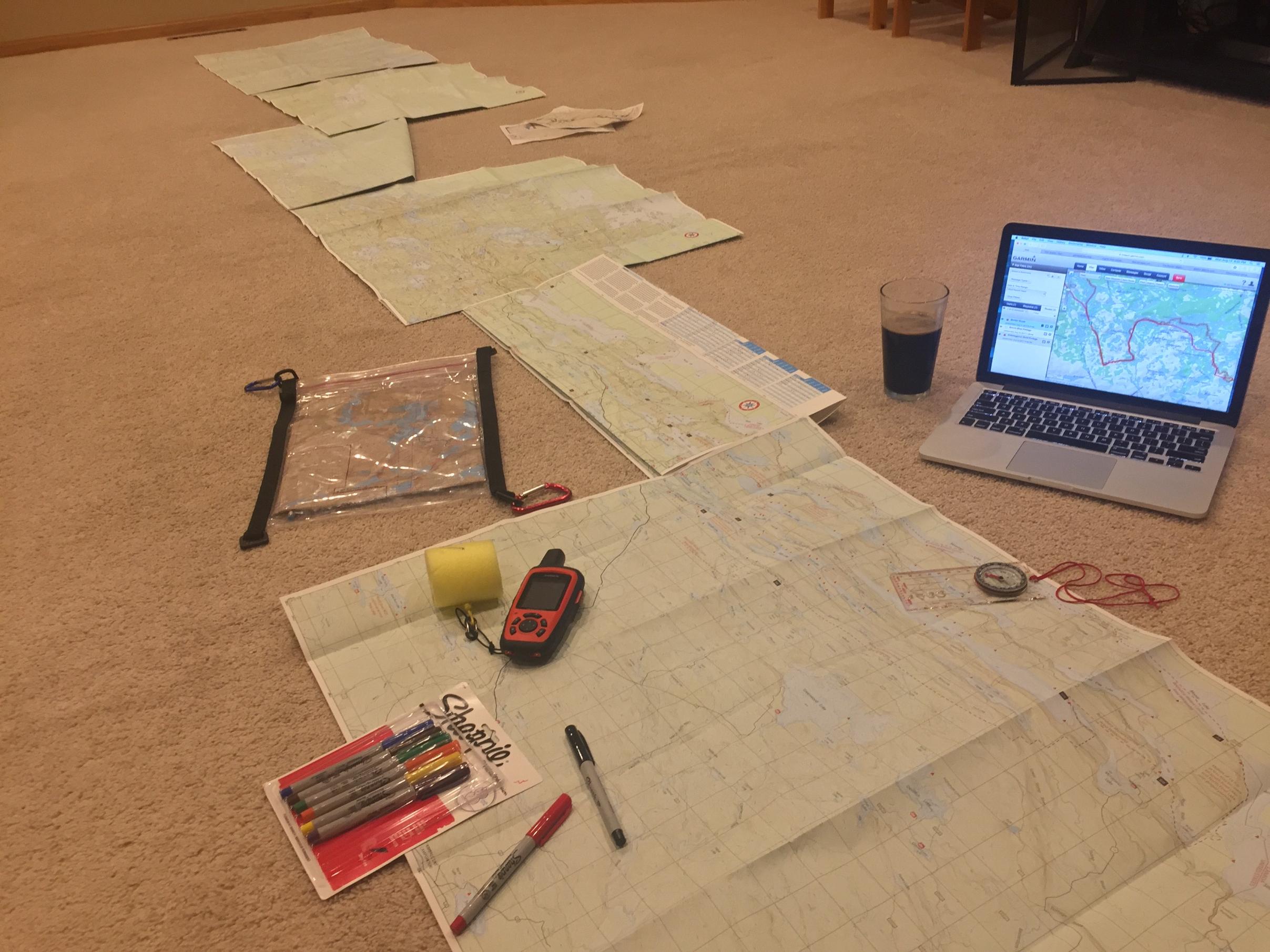 I talked and laughed about my goal of meeting this challenge all summer long, but it wasn’t until the middle of August when it suddenly became serious, and I began to really think about the enormity of what was looming ahead. The doubt was there. I made backup plans in case I couldn’t finish and had to bail. Two weeks before the Challenge I entered a 50mile race downriver on the Mississippi. I got up early the morning of the race and started in the dark at my house, paddling 12 extra miles before even getting to the starting line. It was meant to be a final test of my nutrition plan, which went well. The race itself, however, didn’t build my confidence like I thought it would. While I finished the 62 miles with a respectable time, I was the only solo canoe entry in the race- so while I won the division, I also finished the race dead last and felt like a slug. Going downriver and trying to keep up with tandem racing teams had me paddling a much faster pace than I was comfortable with, and I was tired. I thought about having to camp and then repeat this every day for a week and it didn’t sound good at all.


The week prior to the challenge, I planned packing of gear, and got all my food together: for 8 days it was a lot more than I thought. 3 days to go and I made the call that I couldn’t practically fit everything in the lightweight backpack I had planned to take. I somewhat begrudgingly went in the basement and dug out my larger, much older, heavier pack. Not ideal, but it would have to do.