Trip Type: Paddling Canoe
Entry Date: 07/25/2017
Entry Point: Fall Lake (EP 24)
Exit Point: Mudro Lake (EP 23)
Number of Days: 5
Group Size: 2
Trip Introduction:
This was going to be my second trip to the BWCA. I had spent every day since my last trip thinking about this trip. Ron and I had a busy summer and couldn't commit to a date until a month beforehand. We knew we wanted to get to Crooked Lake after hearing about the fishing up there. We called up Ryan at Cliff Wold's and got everything set up. Ryan, as usual was super helpful and accommodating. We planned on being on the water on 7-25. Ron and I have a tradition on leaving two days before we enter the BWCA. We left on 7-23, drove until dark, and stayed at our usual Super 8 in Rice Lake, WI. We woke up about 5 a.m. and drove up to Cotton, MN where we ate our traditional breakfast at Wilbert's Cafe. Anyone coming up 53 I would advise eating breakfast here. It is pretty dang good! Back on the road and headed to Ely. Since there was construction on 169 we decided to take 21 around and turn at Babbitt. Once in Ely, we went straight to Cliff Wold's and checked in. We shopped afterwards and went to the Wolf and Bear Centers, per the usual. We later ate dinner and packed. Off to bed anxiously awaiting this trip.
Discuss Trip: View Discussion Thread (10 messages)
Day 1 of 5
Tuesday, July 25, 2017 We were up shortly before 6 a.m. and off to the shower to get ready for today's big adventure. I checked over my gear several times and cleaned up the bunkhouse we were in. Finally I was ready for our 7 a.m. pickup. We were picked up by one of Ryan's guys he took us the few miles to the Fall Lake entry point, took our picture and sent us on our way at about 7:30. Ron and I motored right along across Fall. We did almost get swamped by a motor boat that flew by us about 30ft away. We got to the portage and checked out the Newton Falls a little. They were really cool especially since this was my first time seeing any type of falls in the BWCA. Since we quickly moved across Newton and the portage into Pipestone Bay I decided it was time to make a few casts. Ron and I cast around the base of the Pipestone Falls for a bit then decided to fish our way north through Pipestone. We caught nothing through here but we didn't really spend much time trying to fish. We made it into Jackfish Bay and then into Basswood at a pretty steady pace. Our goal was to make it into the Basswood River and find a campsite but that didn't happen. Ron and I were both sore but I wanted to continue to push onto the river but Ron persuaded me to stop for the day at the west campsite on the whale shaped island on Basswood near the Upper Basswood Falls. I agreed that pushing through the one mile portage was bit much after paddling as far as we had. We started setting up camp at 1:30. 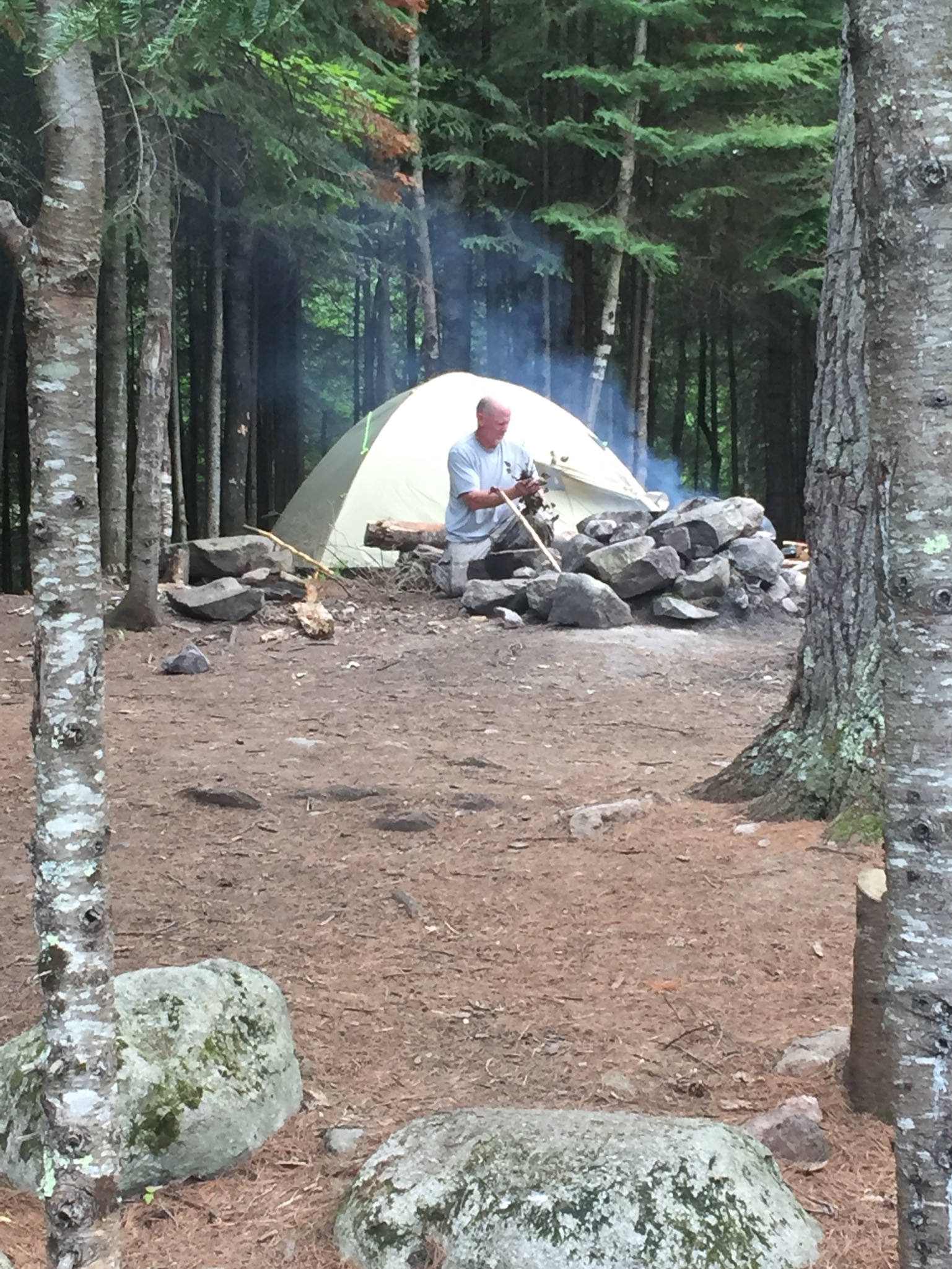 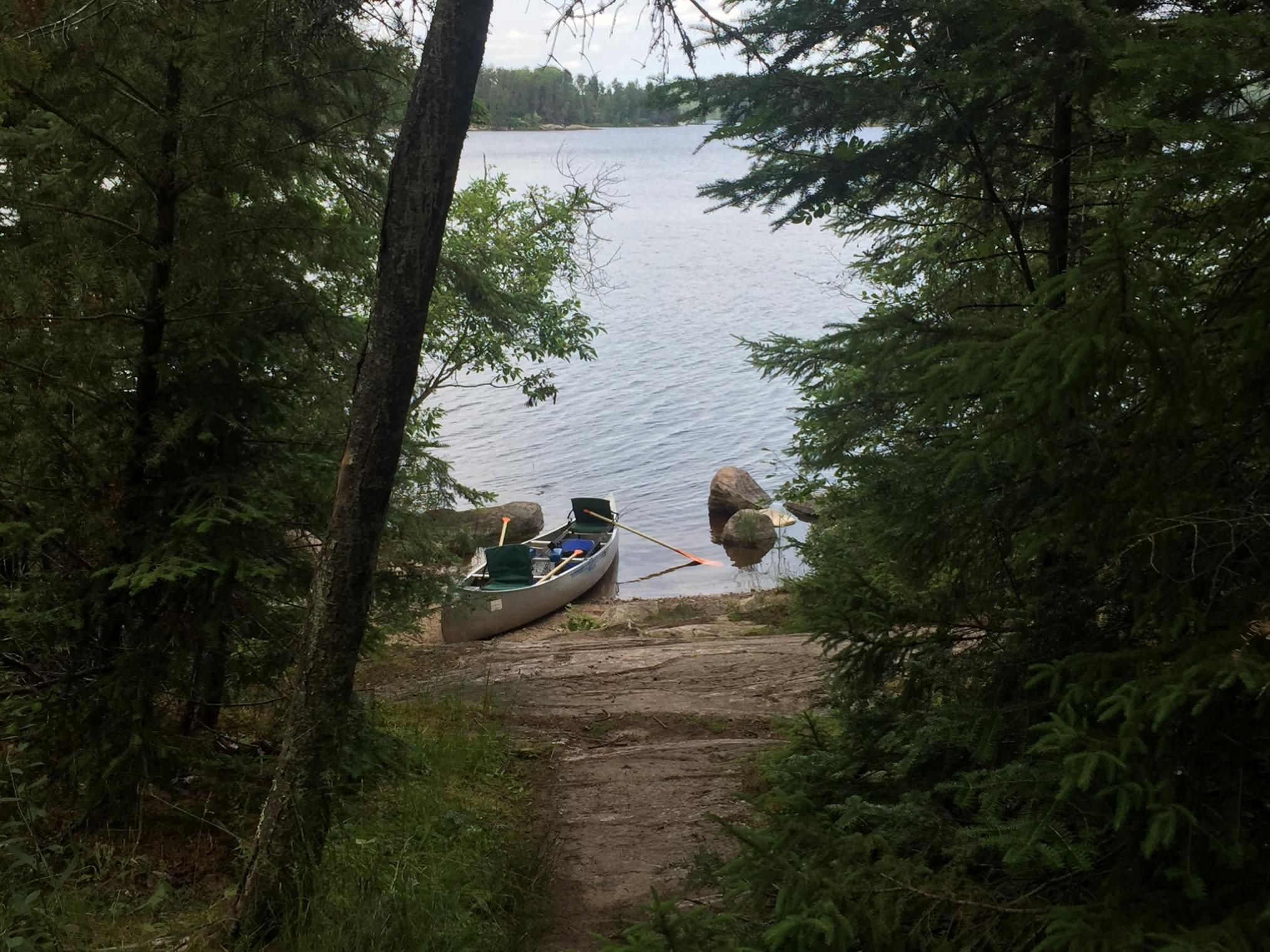 Now I really enjoyed this campsite. I liked that it was up away from the water and felt very secluded. We started cooking our "dinner" at 3 p.m. because we were starved from pushing so far that day. We ate our great meal of steak and hashbrowns, then decided to go do some fishing 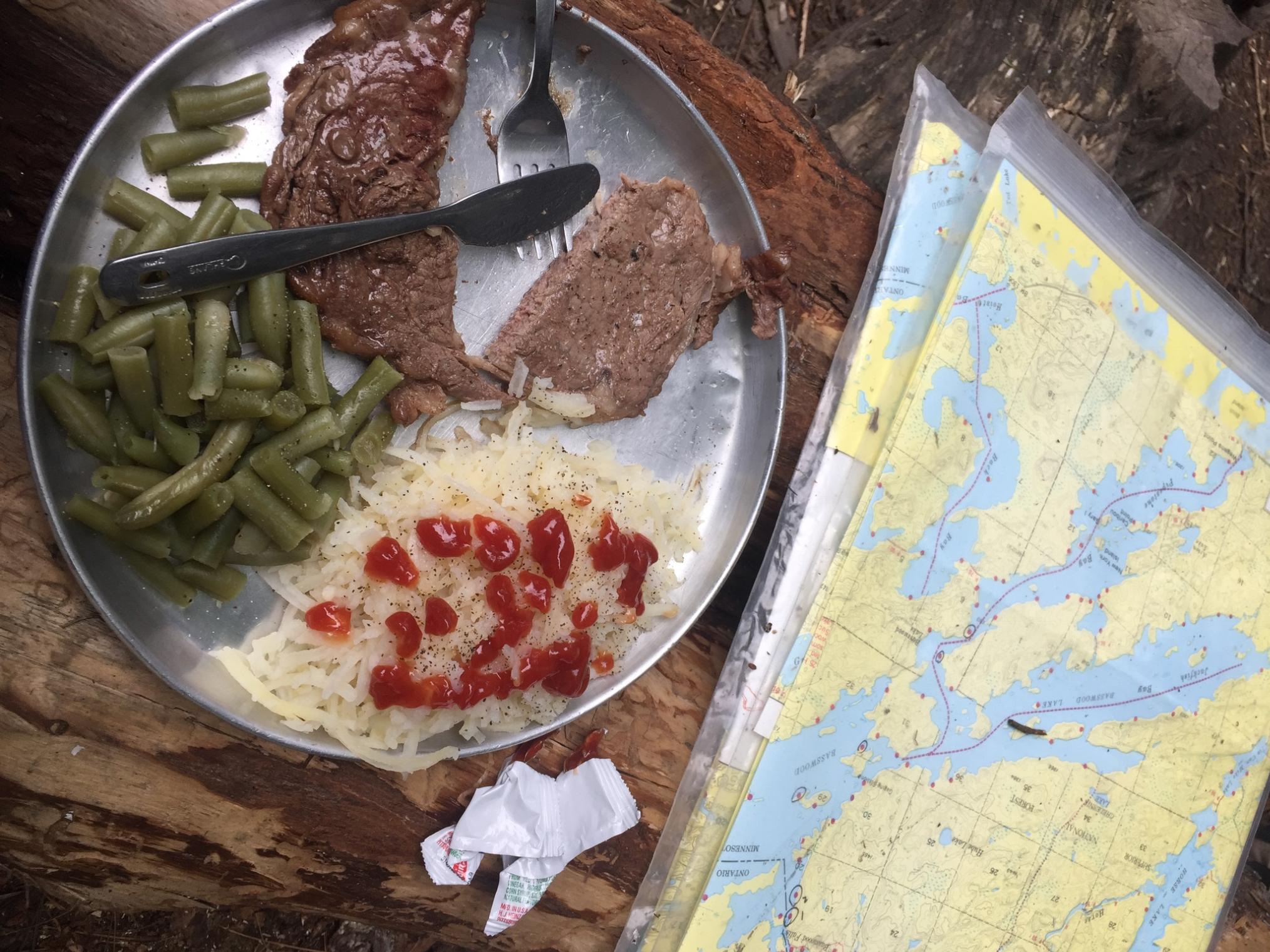 We fished until about 6 with no luck. We were marking a ton of fish in 40+ ft. of water. I'm not sure if the fish finder was acting up or if there was fish and they just weren't hungry. Ron and I went back to camp and played some cards for a while. We both ended up dozing off about 7:30 til 9. We both woke up and laughed at how pathetic it was that we were that tired and that we caught no fish the whole day. We buttoned up camp for the night and went to sleep around 9:30.