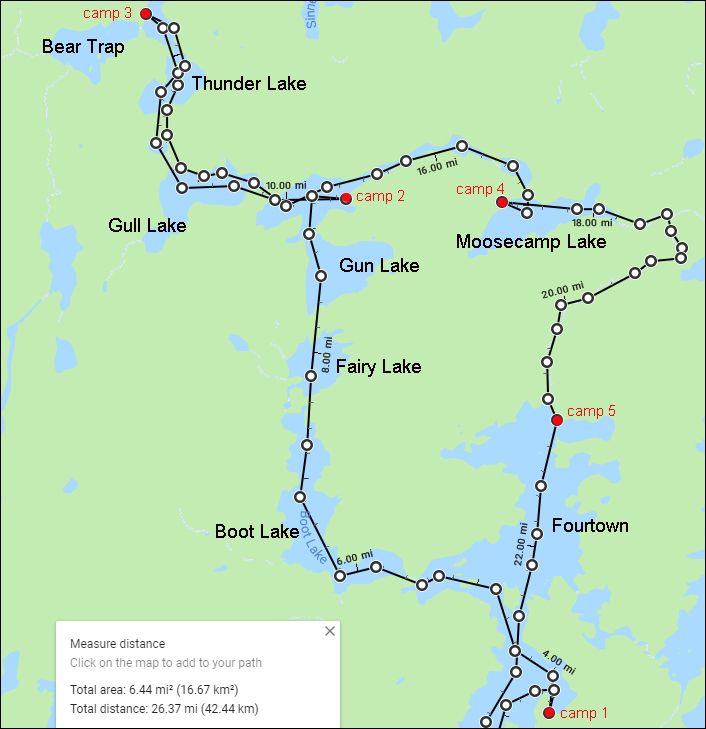 We slept late the morning of our entry because two of our party drove through the night from Wisconsin and arrived at my cabin at 2:30am. The first 30 rod portage into Mudro Creek is a breeze, but the 3 portages from Mudro into Fourtown prove to be quite difficult, as many have reported. Luckily, the camp site I wanted was open – the one on the west side of the small bay on the south end of Fourtown. 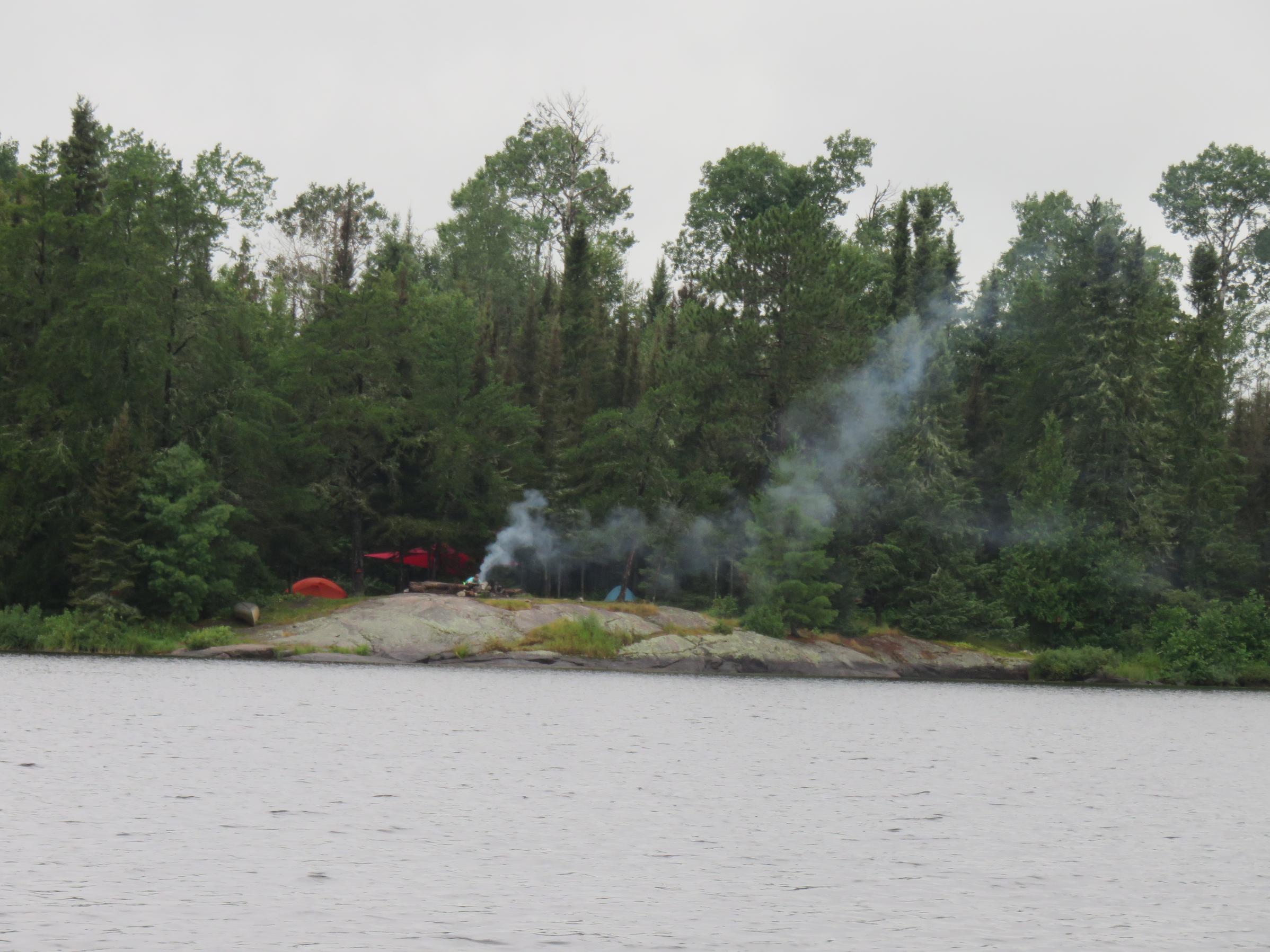 Thunderstorms were predicted, and the system hit us the moment after we ate grilled steaks. We had our 15’x15’ Cooke Custom Sewing Tundra tarp up – which was a good size for the 6 of us and worked very well – but we had placed it in a low area that flooded quickly. The winds were not dangerous, but the lightning strikes were close, which is always a bit unnerving.

We huddled under the tarp with our rain suits on and the storm passed after about an hour. We had stashed our portage packs under the tarp with us, and they were all laying in 4-5 inches of water by the end of the deluge. Our packs were lined with heavy duty plastic liners, so the contents stayed dry. But we had to dig trenches to drain the pools drowning our tents. 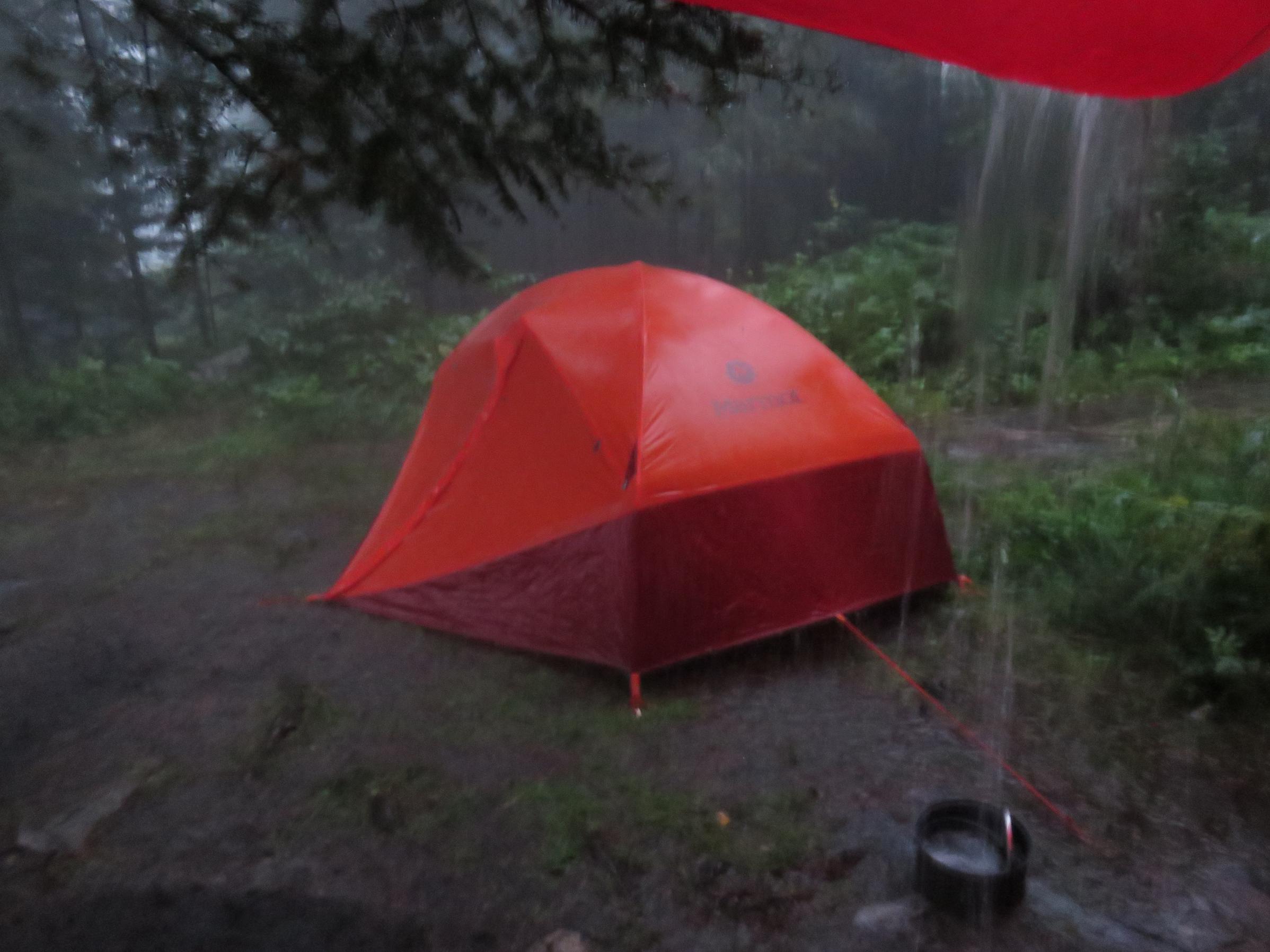 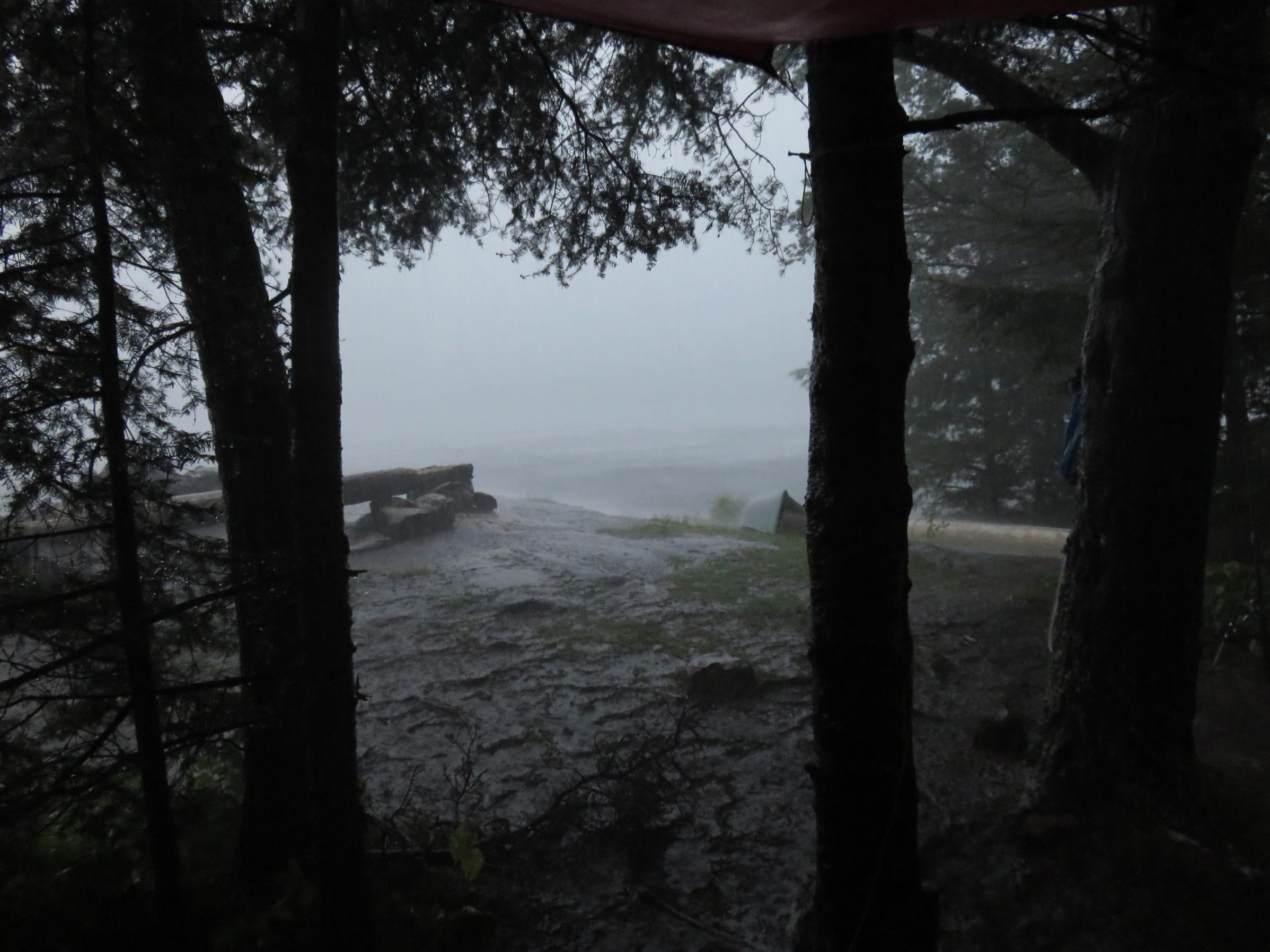 Safe and un-electrocuted, we fished in the bay and caught some smallies one small walleye.

This site, and several others in the area, have old garbage, and other cryptic remnants of logging camps strewn on shore and in the woods. Lots of tin cans, tin sheeting, iron cables, and chains. I personally find the logging artifacts charming, but they do take away from the pure wilderness experience. I wonder what the official stance is on removing these antiques. There’s certainly tons of this stuff under water as well. Best to wear sandals when swimming!

At night in the tents, we heard one or two wolves howling, not far in the distance…

Another late start to the day. We dried our tents and other odds and ends in the sun before packing. It was sunny and clear. Traffic emerged to and from the Mudro portage.

Fourtown is a relatively large lake – it took around an hour to paddle from our campsite to the portage into Boot. Both Boot and Fairy are very picturesque, and my one regret on this trip is that we didn’t camp on either of them. But the positive side is that we made it all the way to Gun. There were only two sites left open on the lake. The first one we checked is the site to the west of Camp 2 – it’s a tad small for 6 people and three 2-person tents. The site at Camp 2 is very nice – one of the nicest we stayed at. Lots of flat ground, airy and open feeling, and a long rock point juts out into the lake. The wind turned up to about 15-20 mph, so paddling was difficult, and we stuck close to camp and didn’t catch much. 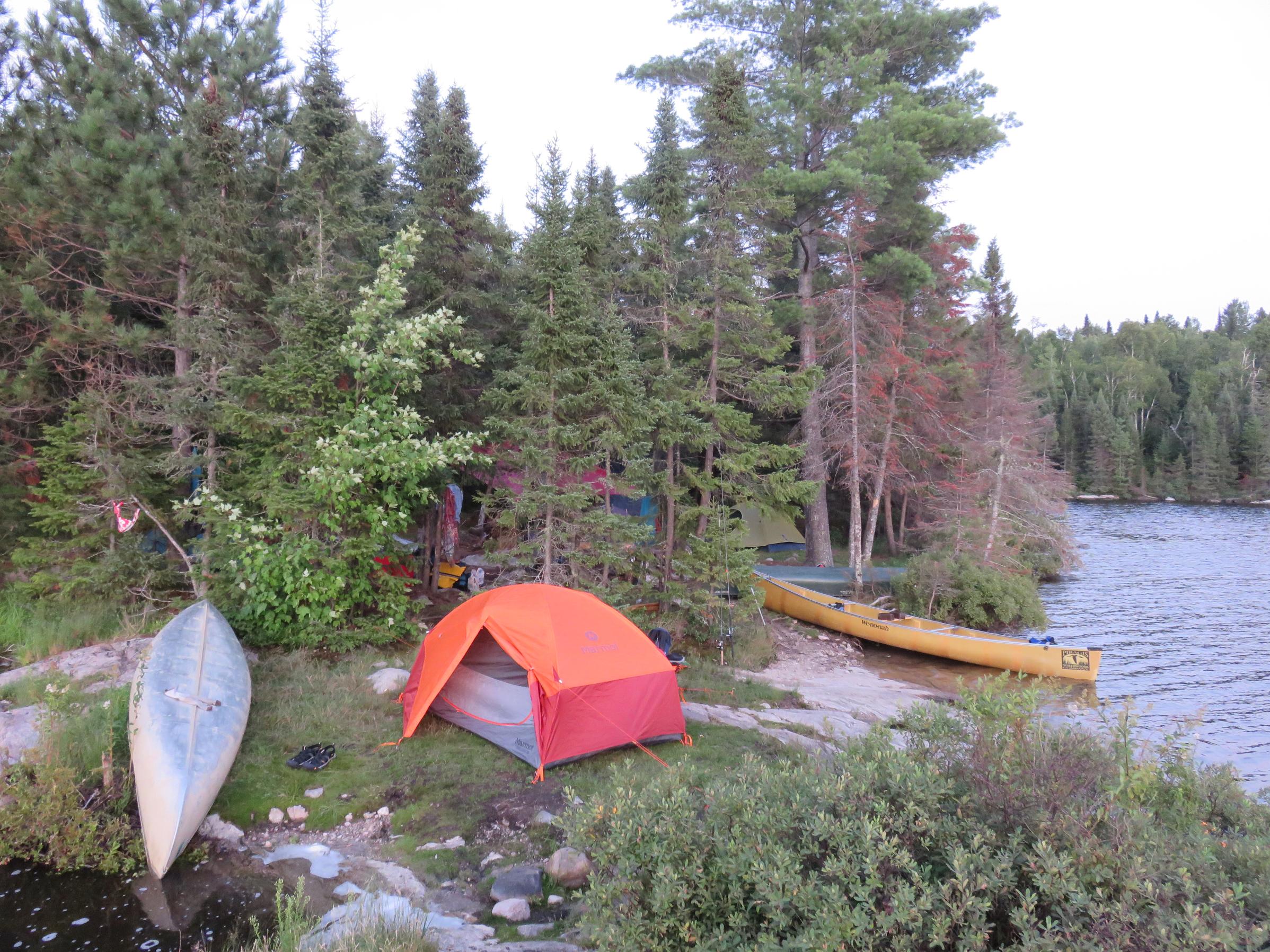 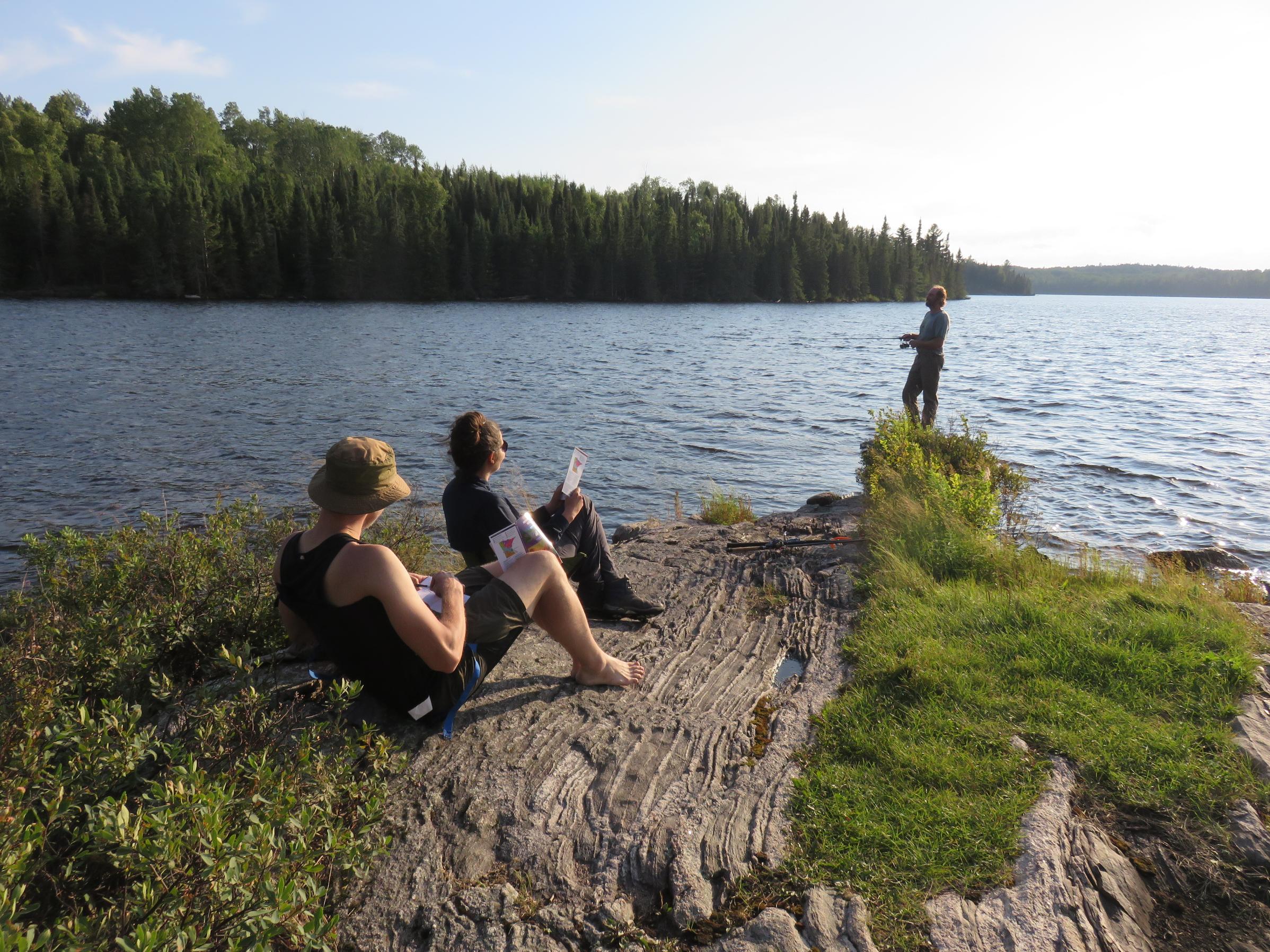 Our mission this day was to get to the one-and-only campsite on Beartrap. I’d heard it was good walleye fishing, and it’s always nice to have a lake to yourself. Unfortunately, the site was taken, but we lucked out and the site on Thunder by the 5 rod into Beartrap was open. The site has a nice high view, but it’s a steep hill down to the shore – not the easiest terrain for water access.

One awesome find at this site was on the path to the latrine, in the woods there is a huge popple tree that has been felled by beavers. I’ve never seen a tree truck that large be taken down by beavers – it was close to three feet in diameter – and the bite marks left an artistic design.

We caught a good amount of walleye in the narrow channel on Thunder that day, and had our first walleye dinner of the trip – you can’t beat straight out of the lake into the pan! I’ve stopped bringing Shore Lunch because it requires a lot of oil and is very messy. For this catch we just seasoned the filets and put a small amount of oil in the pan. Delicious! 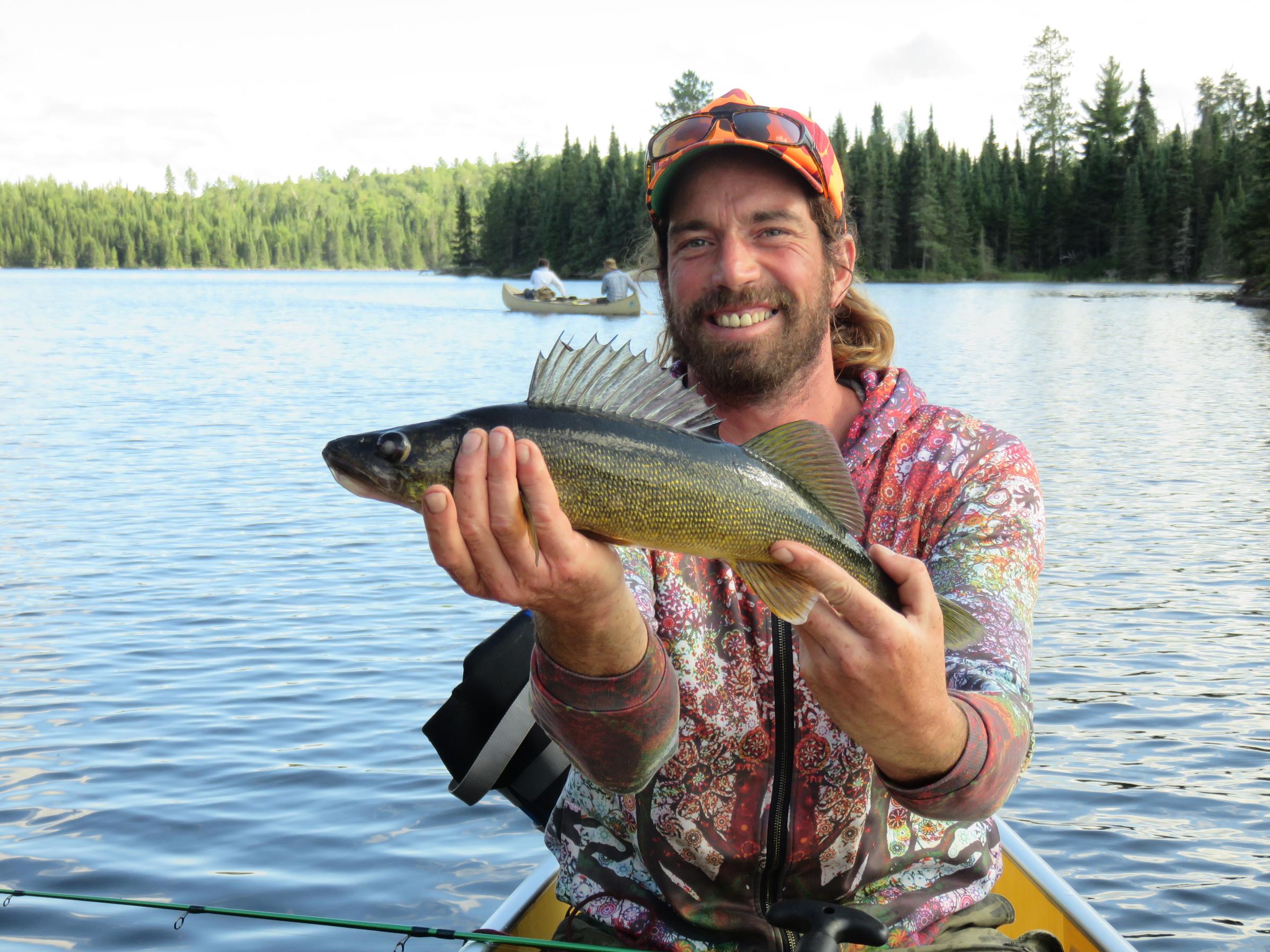 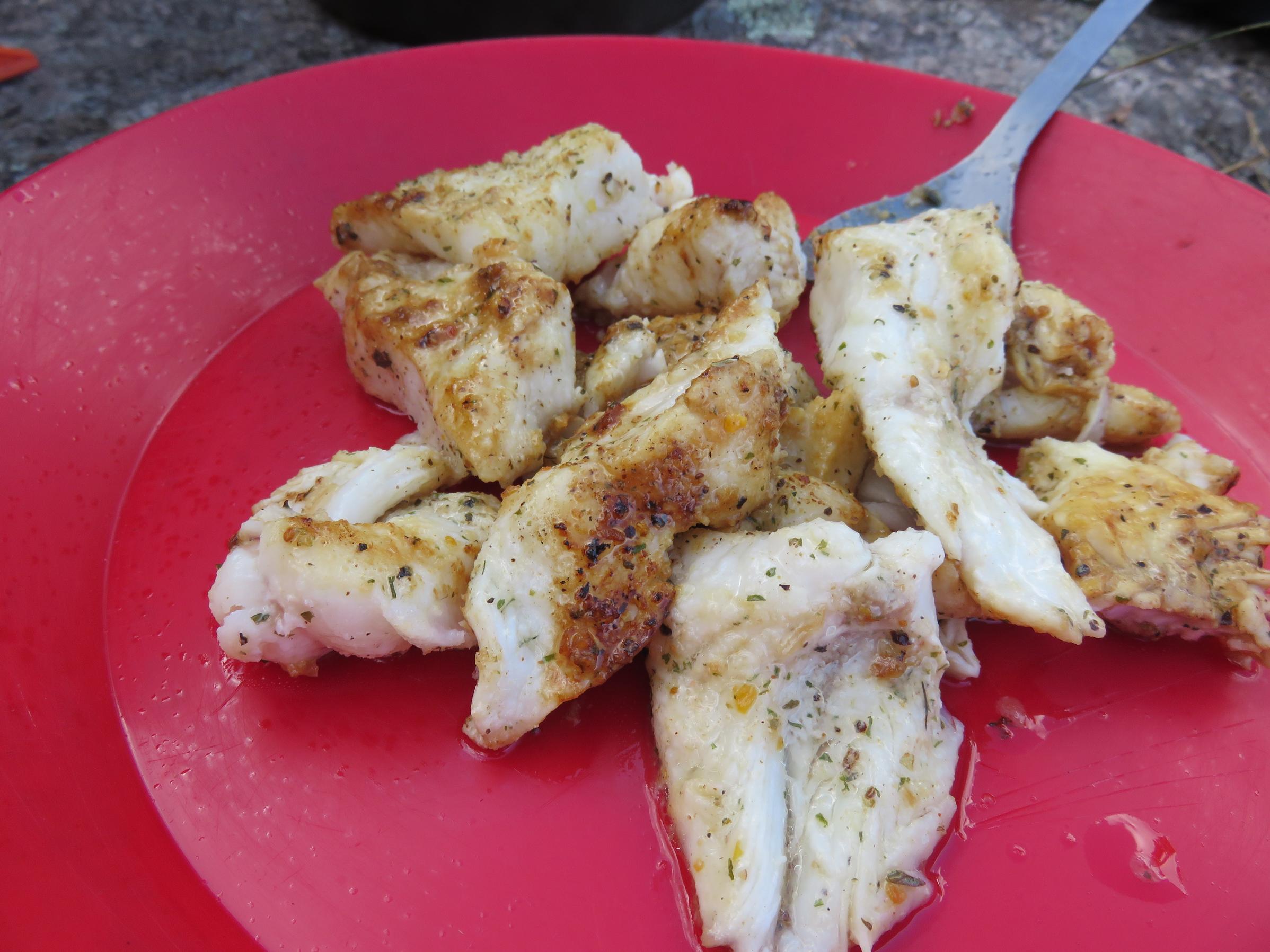 At night at the fire, we heard a pack of wolves howling and screaming together several times. We estimated they were on the shore across the lake from us. No one in our group had heard wolves howl like that. It was an amazing experience I won’t soon forget.

We stayed another full day and night on Thunder. Figured it was a good place for a layover since it was the furthest into the BWCA our trip took us. We also wanted to give Beartrap a good try for walleye.

On my McKenzie map, the only portage going into Beartrap is the small 5 rod from Thunder - so we were very confused to see traffic go into Beartrap and not return. There must be another portage that is not on my map. Does anyone know about this? We did find a path next to a creek (either Beartrap Creek or Home Creek – I can’t remember), but we didn’t hike the entire thing.

We fished under the hot sun for 3 or 4 hours on Beartrap and only snagged a small pike or two. We finally started catching walleye in the bay on the south side of the island by the camp site. It is interesting to note that the walleye were 5-10 feet deep – much shallower that I expect in August. We worked hard for our catch and were glad to have another walleye dinner.

We headed out on Day 5 to retrace our steps back to Gun, and head further to Moosecamp Lake. It was overcast and hazy from the forest fires in California and Canada. It showered lightly and then slowly cleared as we paddled and portaged. The portages between Beartrap and Gun are short, flat, and have good trails.

It appeared all the sites were open on Moosecamp. We floated over to the northern most site next to the portage from Bullet and found a wonderful fire area and plenty of space for tents. The camp is on the top of a ~10ft cliff that tapers off into the water to the east, which creates prefect landing spots for canoes and easy access into the water for swimming. This site and the one on Gun on Day 2 were my favorite on our trip.

Another thing that makes this site special is an old historical marker from 1923. It's a metal pole driven into the ground with a cap on it that says, "U.S. General Land Office Survey - 1923 - Penalty $250 for Removal". Imagine surveying the land in the BWCA area in 1923! Does any one have any info on this marker? 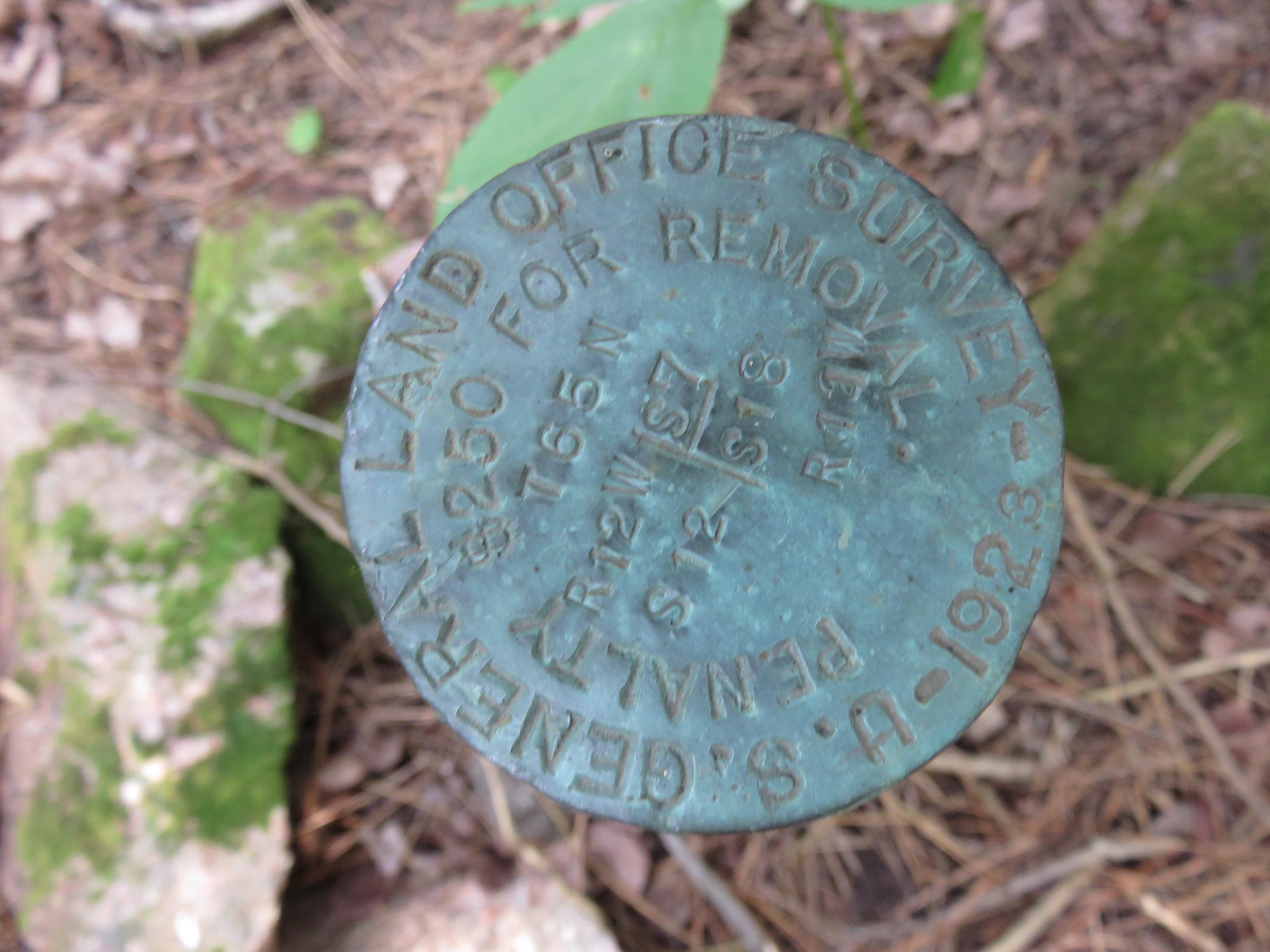 We saw a couple groups pass while we were setting up camp, but no one stayed and we had the lake to ourselves. Moosecamp is small and shallow, probably about 10’ deep from shore to shore. We canoed along shore and fished the entire circumference of the lake. We hit several pike, so I suggested to the group that we pick a couple 20-30 inchers for dinner. I caught my record size smallie as well, which I released - an epic fight! 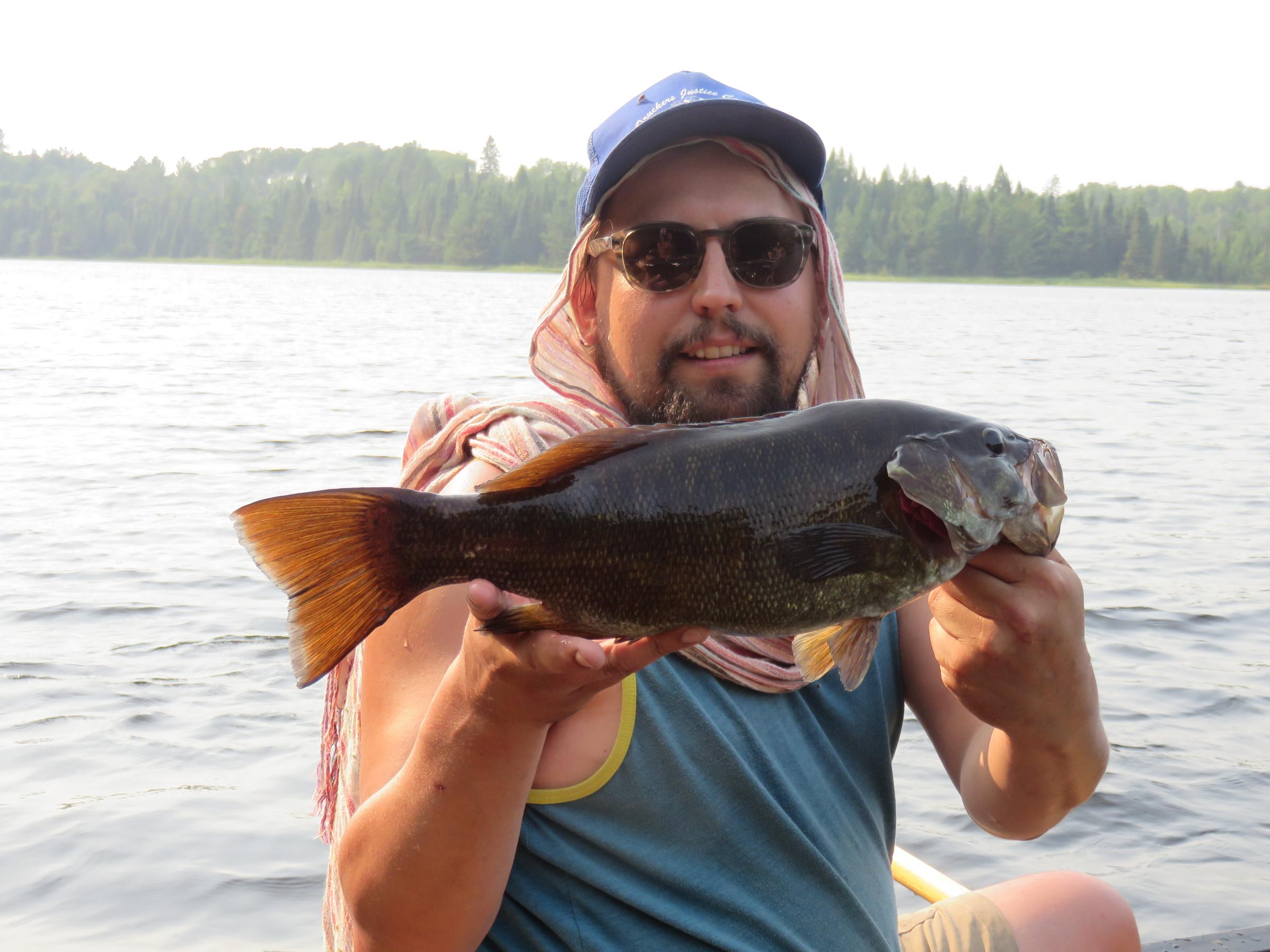 Instead of fileting the pike and taking out the Y bones, we decided to gut them, then stuff them with herbs and spices, and put them on the fire wrapped in tin-foil. It was a big hit. You have to pick through the bones, but the meat is delicious, and it cooks very evenly in the tin-foil. One of our campers also found a bunch of chanterelle and a couple bolete mushrooms that we fried up to go with the pike. The woods behind this site are flush with all kinds of fungi, which makes the forest even more magical. 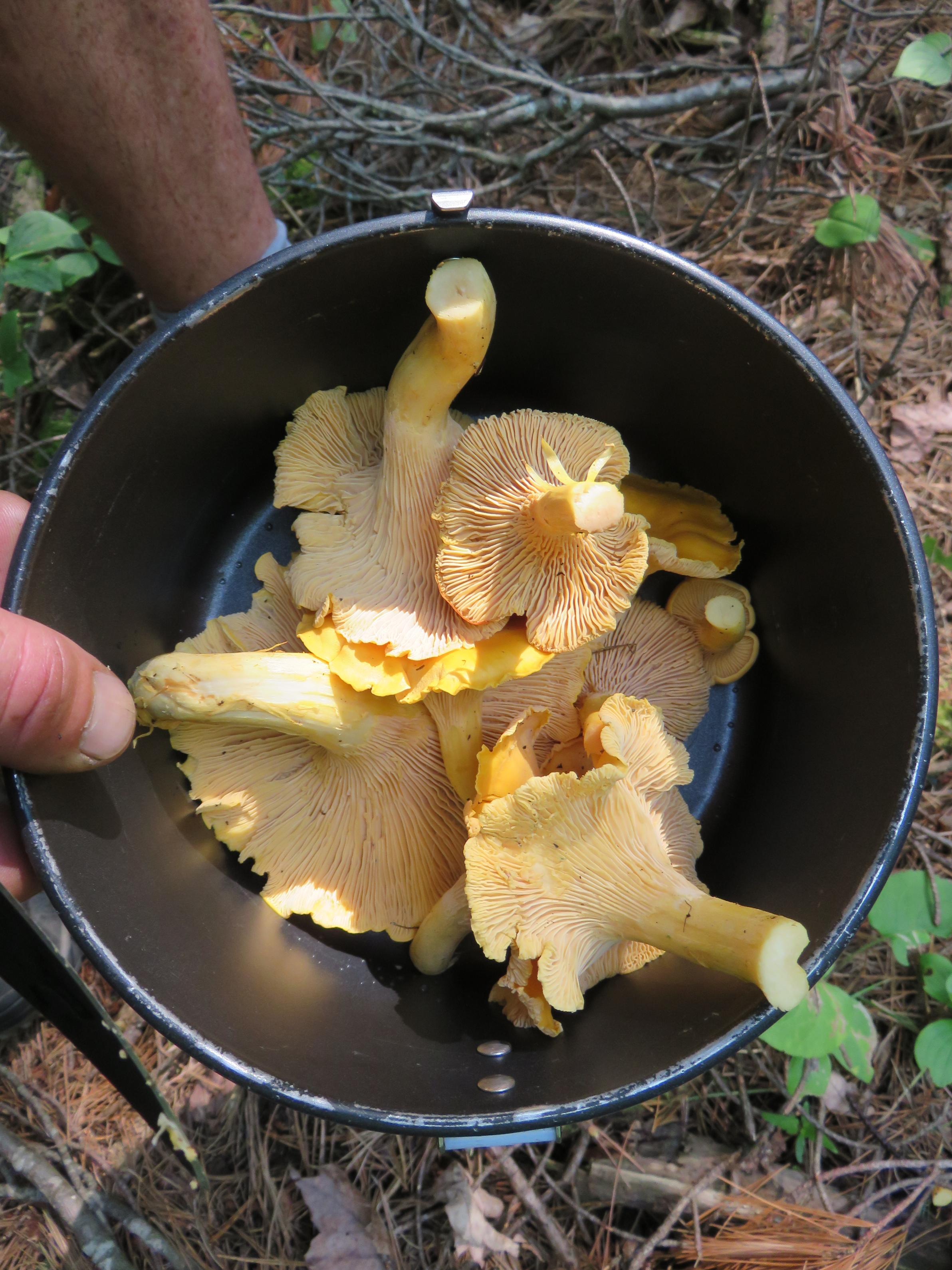 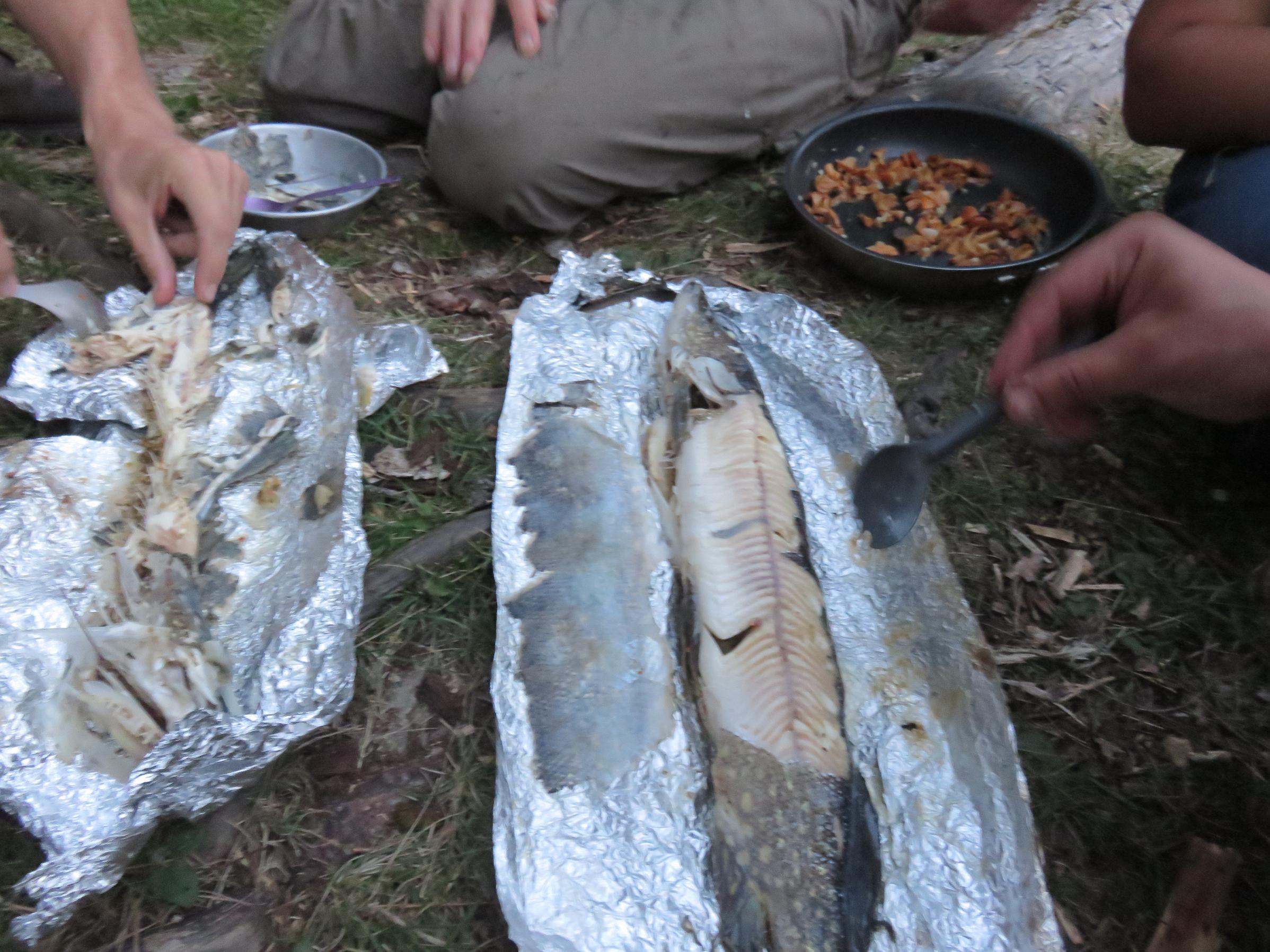 I wish we had taken the Moosecamp River earlier in the morning. There was a blistering sun, even through the Canadian fire haze, and no shade along the weedy, winding route.

I’d heard on the forum an estimate of 2-3 hours to take the river, but it only took about 1 hour. Still, we were beaten by the high noon sun, and it was hard work to rudder around the tight bends and push through the lily pads. 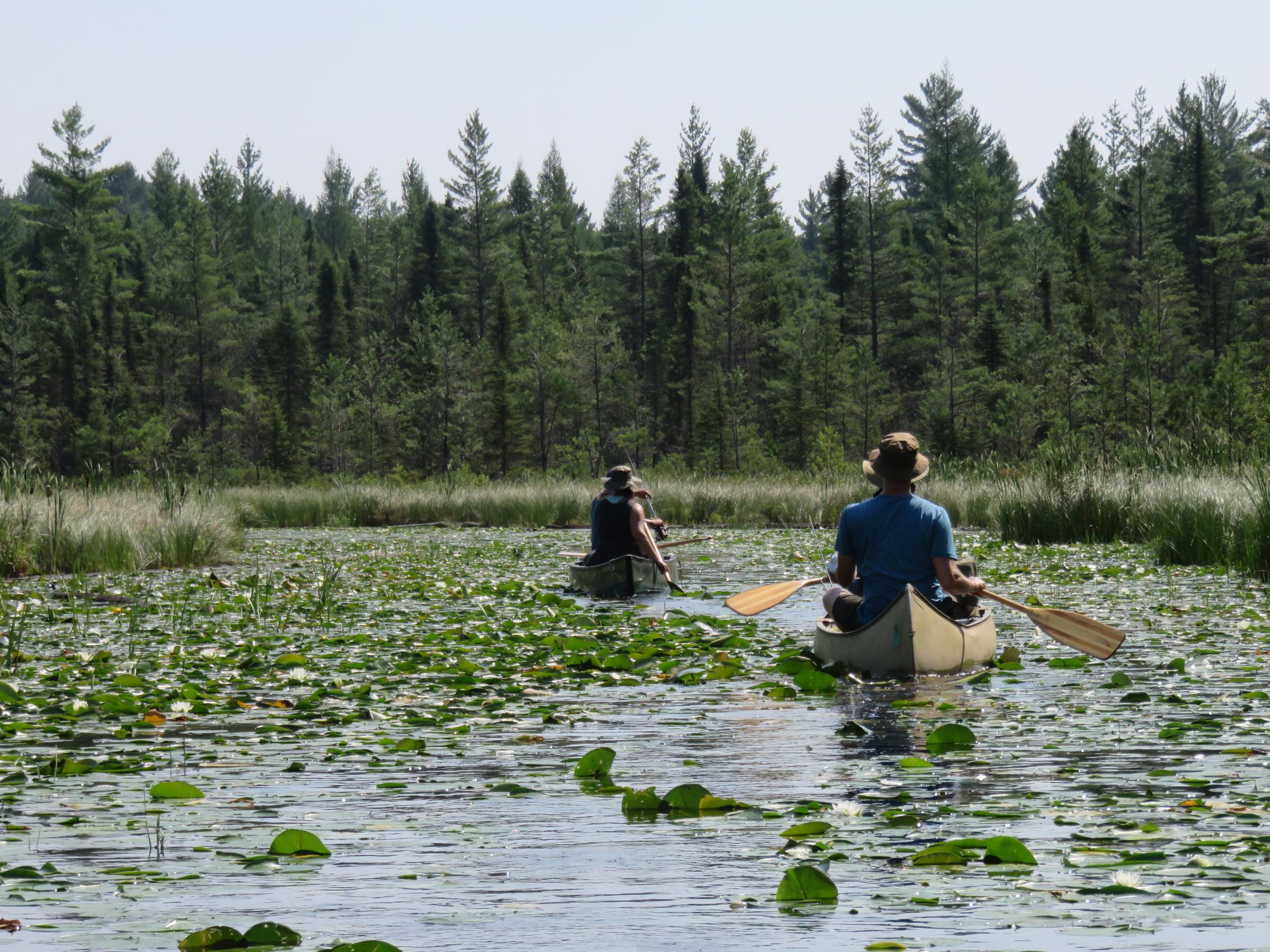 We saw that the campsite to the east of the mouth of the river on Fourtown was open, but decided to look for something closer to the portage into Mudro. The paddle to the eastern strip of campsites was easy with a tail wind, but all of the sites were taken. So we had to paddle back a 1.5-2 miles back to the site by the river. All together it was a tough day. We all went to bed early.

The site we ended up at has a great view of the lake and the small, bare islands that polka dot the north arm. It also has plenty of flat space for tents, and a nicely placed fire grate with some log benches. The outfitter at Piragis had mentioned it was a nice site, and he wasn't lying! 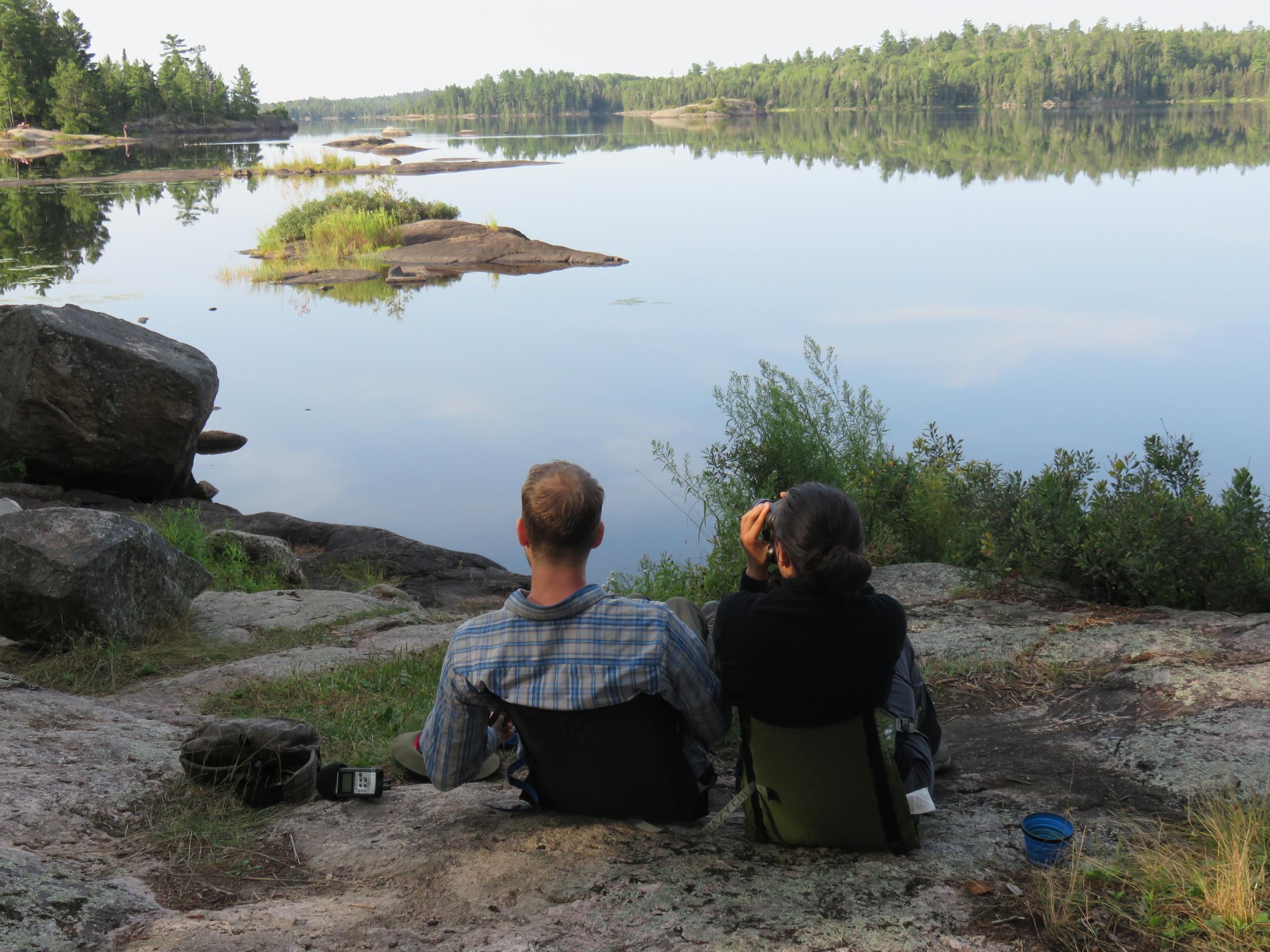 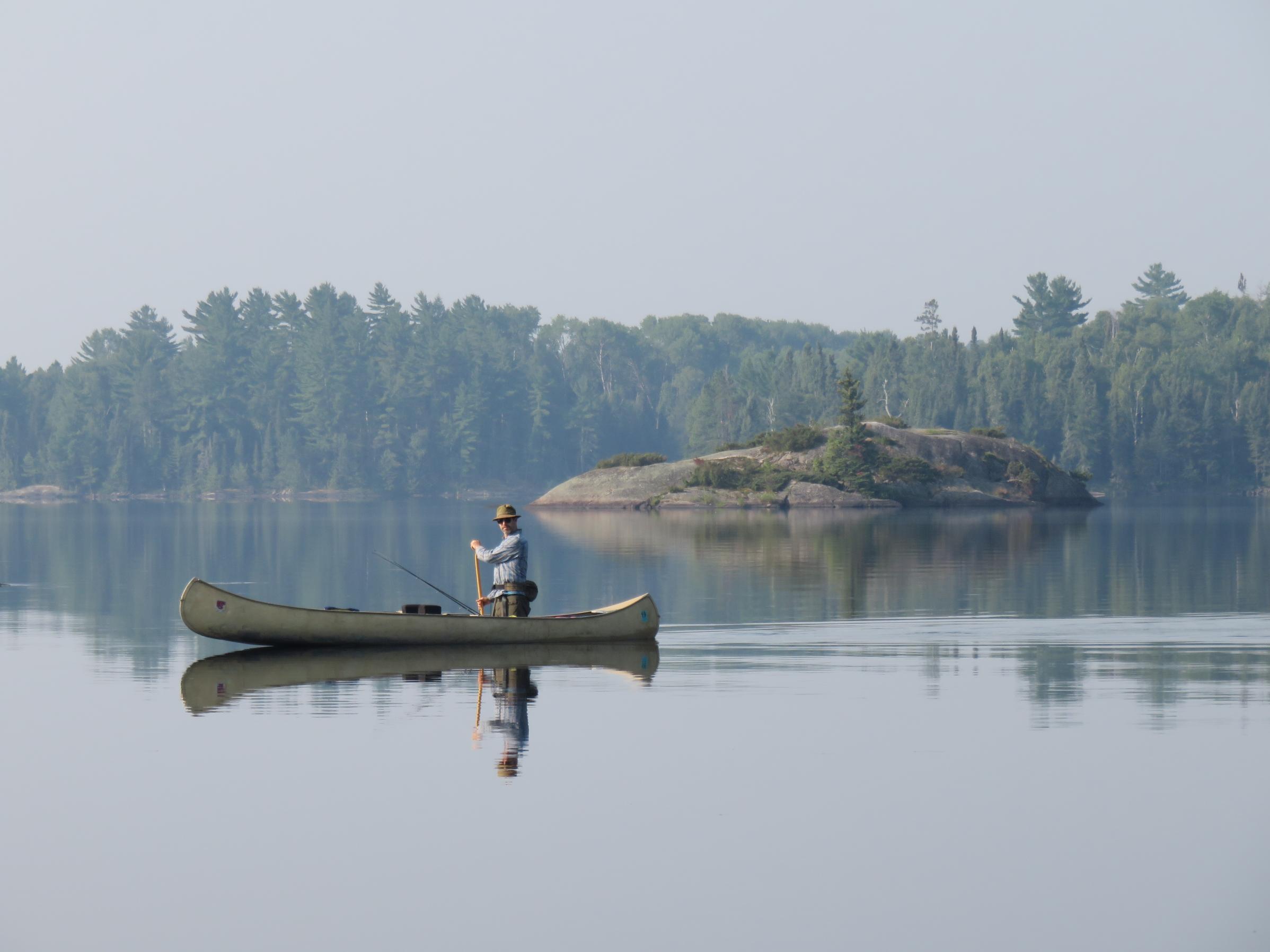 The next day was our layover on Fourtown. We were hoping the fishing would be good on a bigger, deeper lake and lots of structure. The bites were still slow, but we found a couple spots with feisty smallies. As we were headed back to camp for lunch, I caught a nice sized walleye, so we tried the area a bit longer but didn’t have any luck. The wind was up, and it was impossible to target one spot for long.

I put the walleye on a stringer at camp, and we went back out after lunch. We had the typical pike hits here and there, and I caught one huge sunny, which I kept. It was a treat that our last dinner in the BWCA was a spread of walleye, pike, and bluegill.

The paddle across Fourtown in the morning was over calm, glassy waters. The sky was clear, and the sun was gearing up for another hot day. The 140 rod into Mudro was still a beast, naturally – up and down and difficult to find footing on the rocky trail. I think the trip from the north end of Fourtown to the Entry Point landing took 3 to 3.5 hours. We drove straight to Piragis to return the one canoe and the tarp and then ate a late lunch and Rockwood (across the street from Zup’s). Rockwood is pretty new so I’d never been there, but the food was really good and it was 2 for 1 happy hour – can’t beat that!

Thanks for reading. I hope this can be helpful to those who are planning a trip in the area. Feel free to comment and I will reply.

The photos in this report were all taken by our fellow camper, Eva! Here are some other favorite shots of the trip. 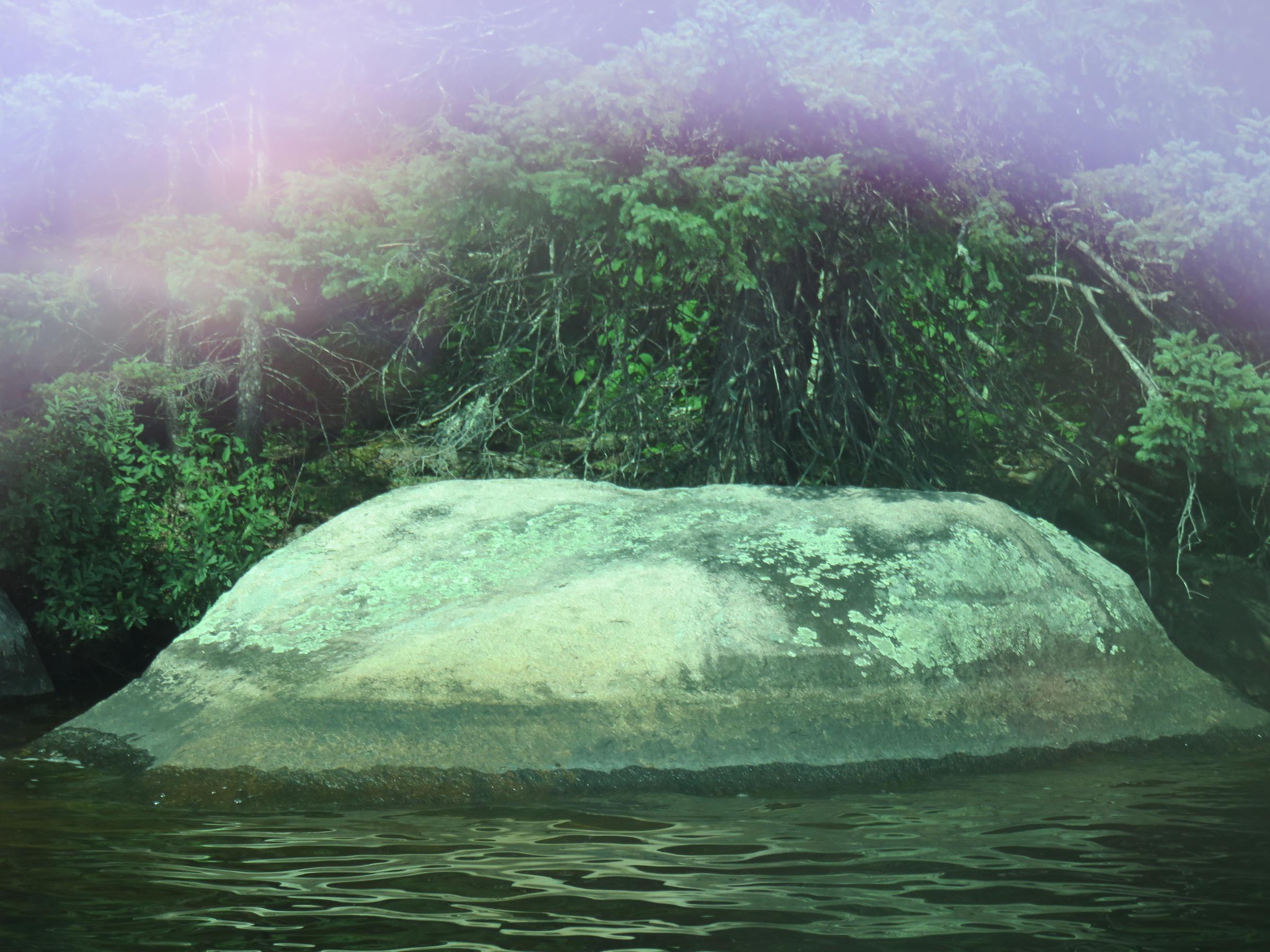 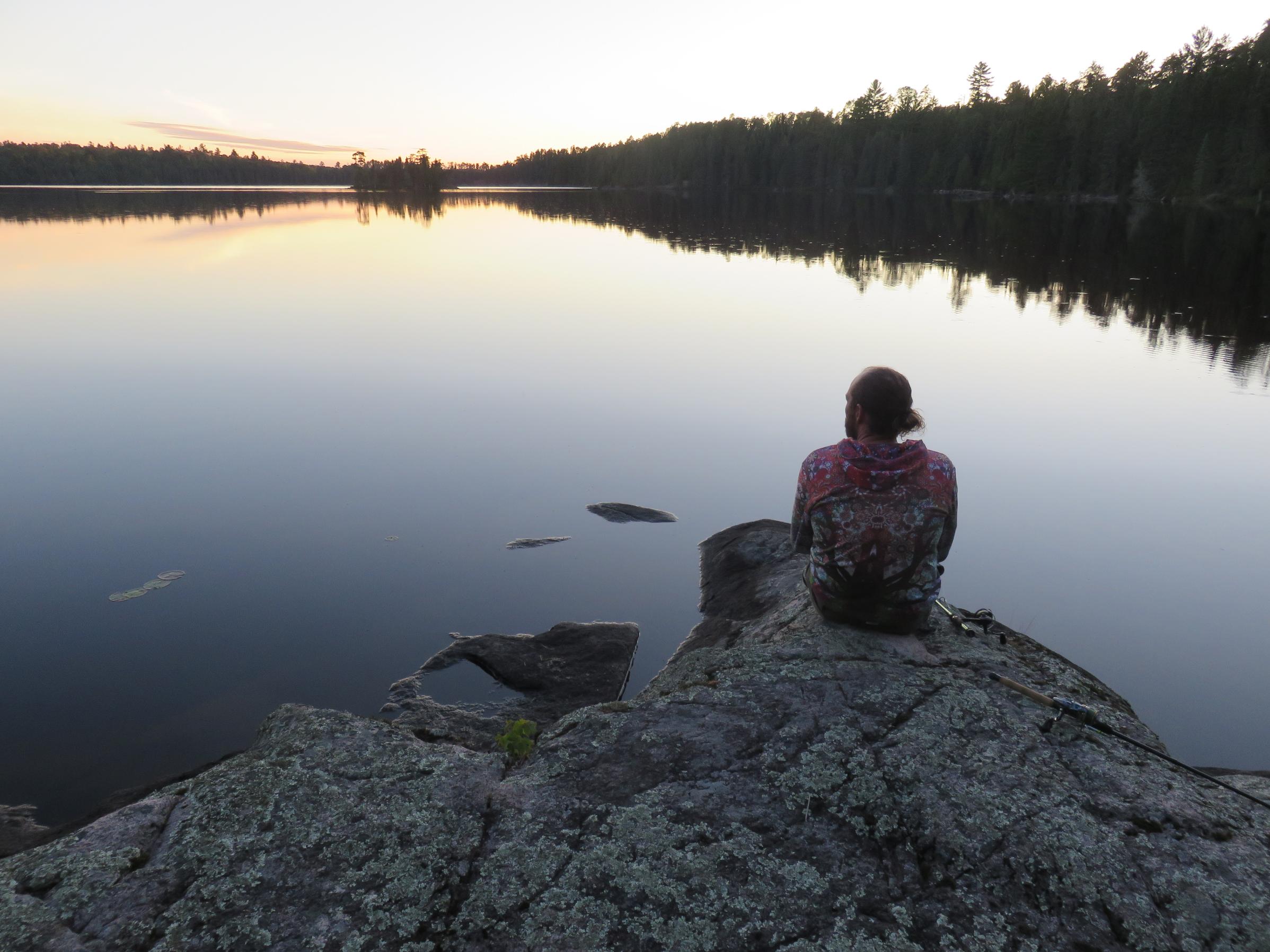 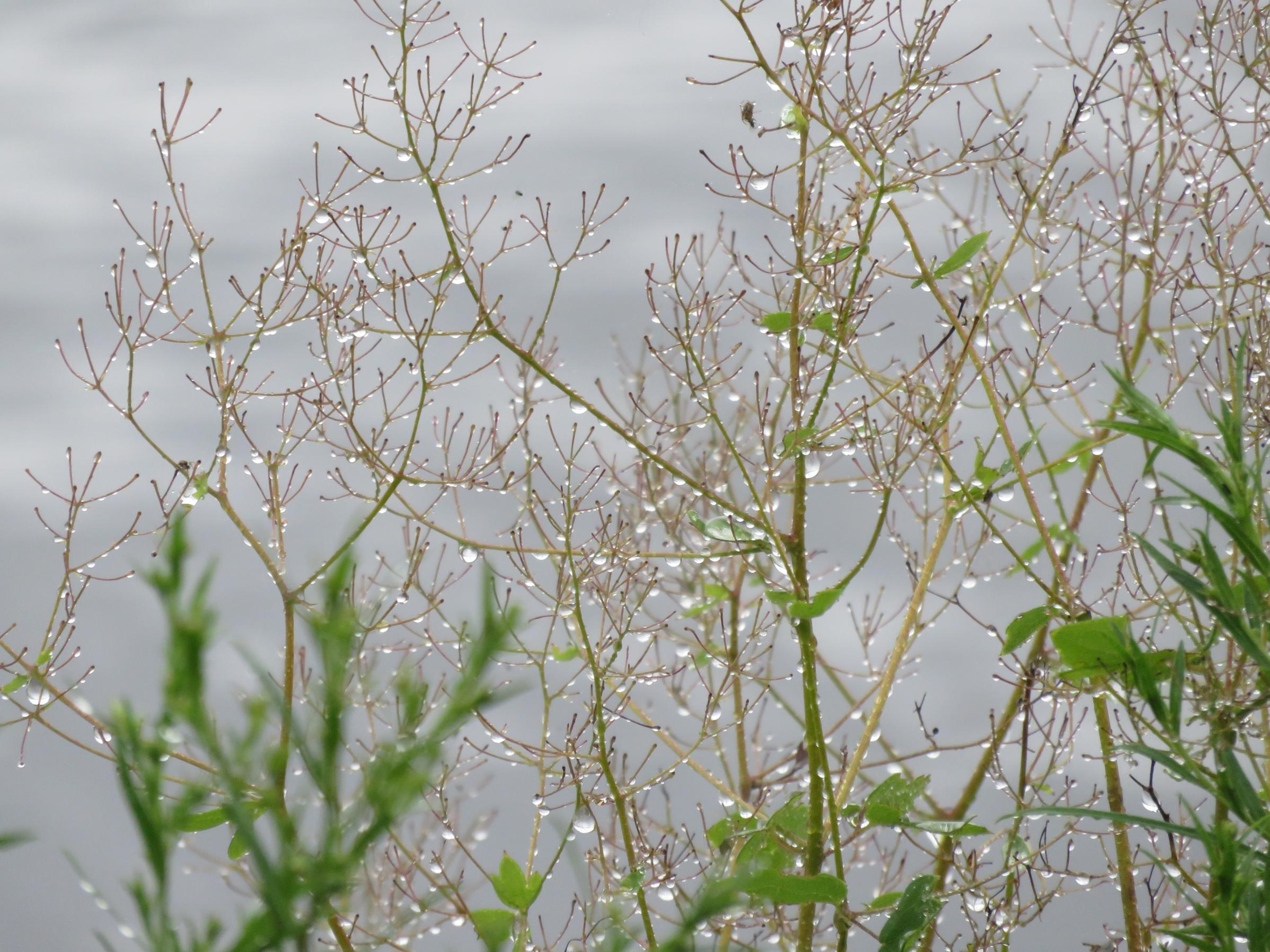 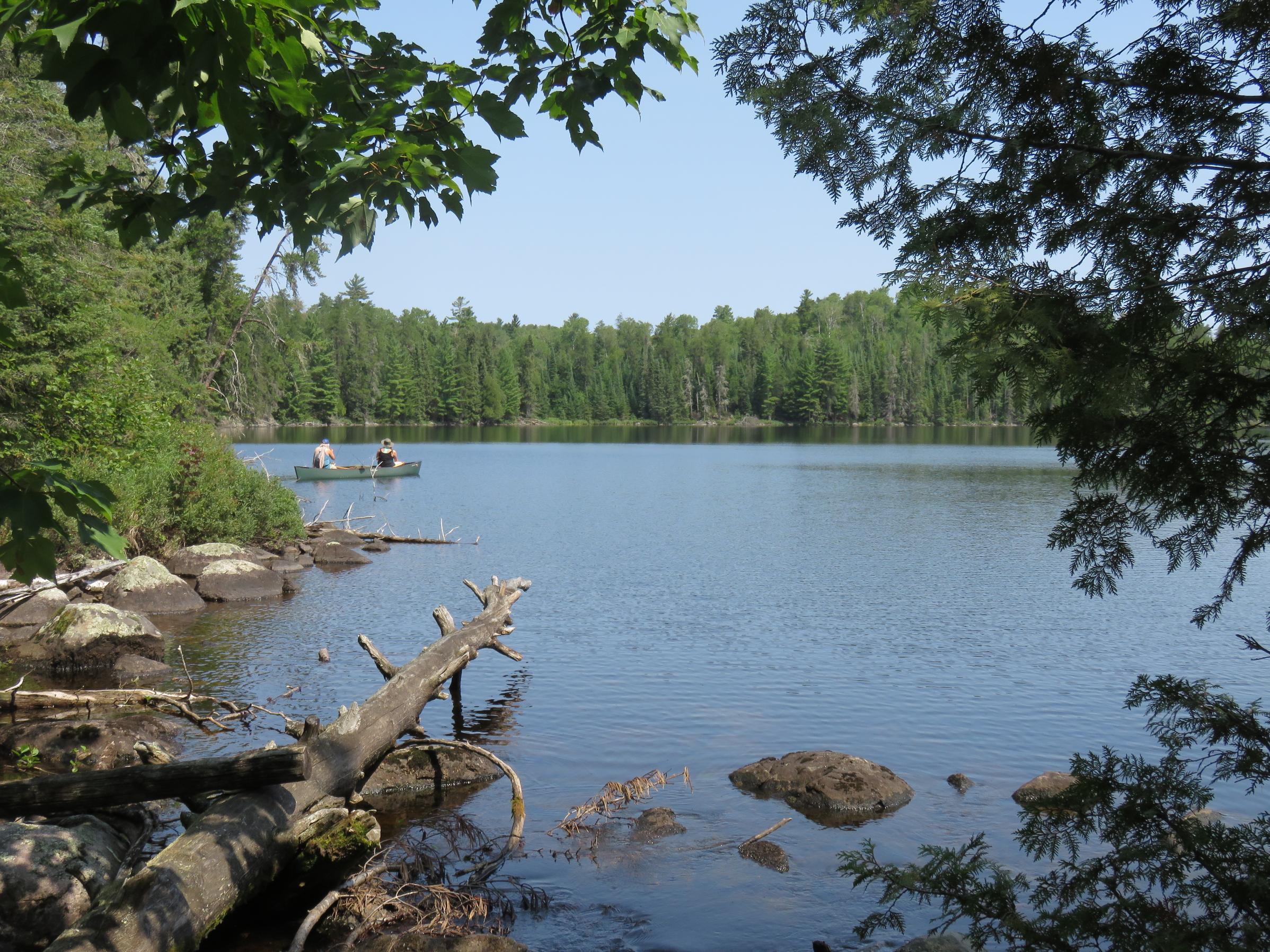 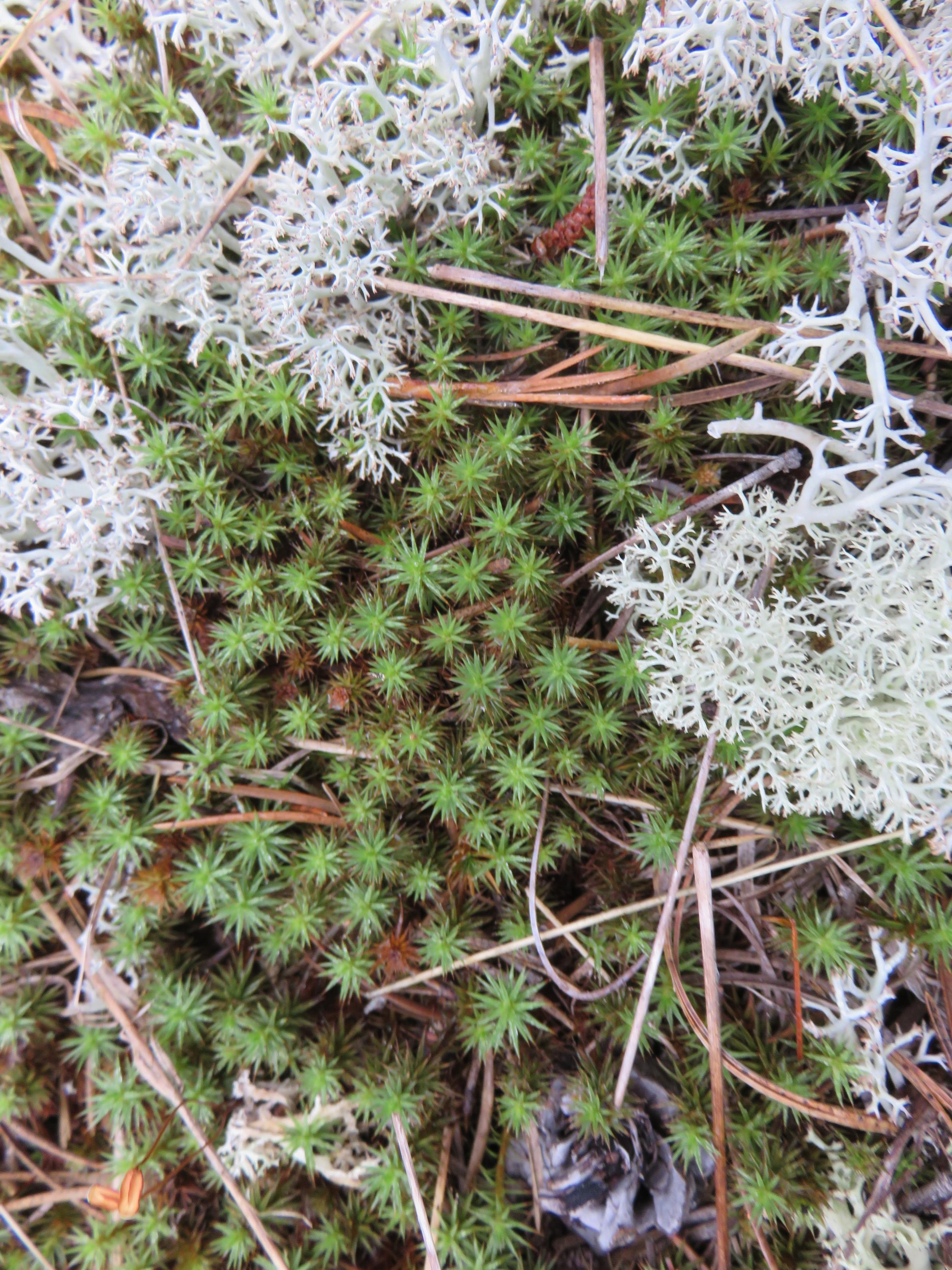 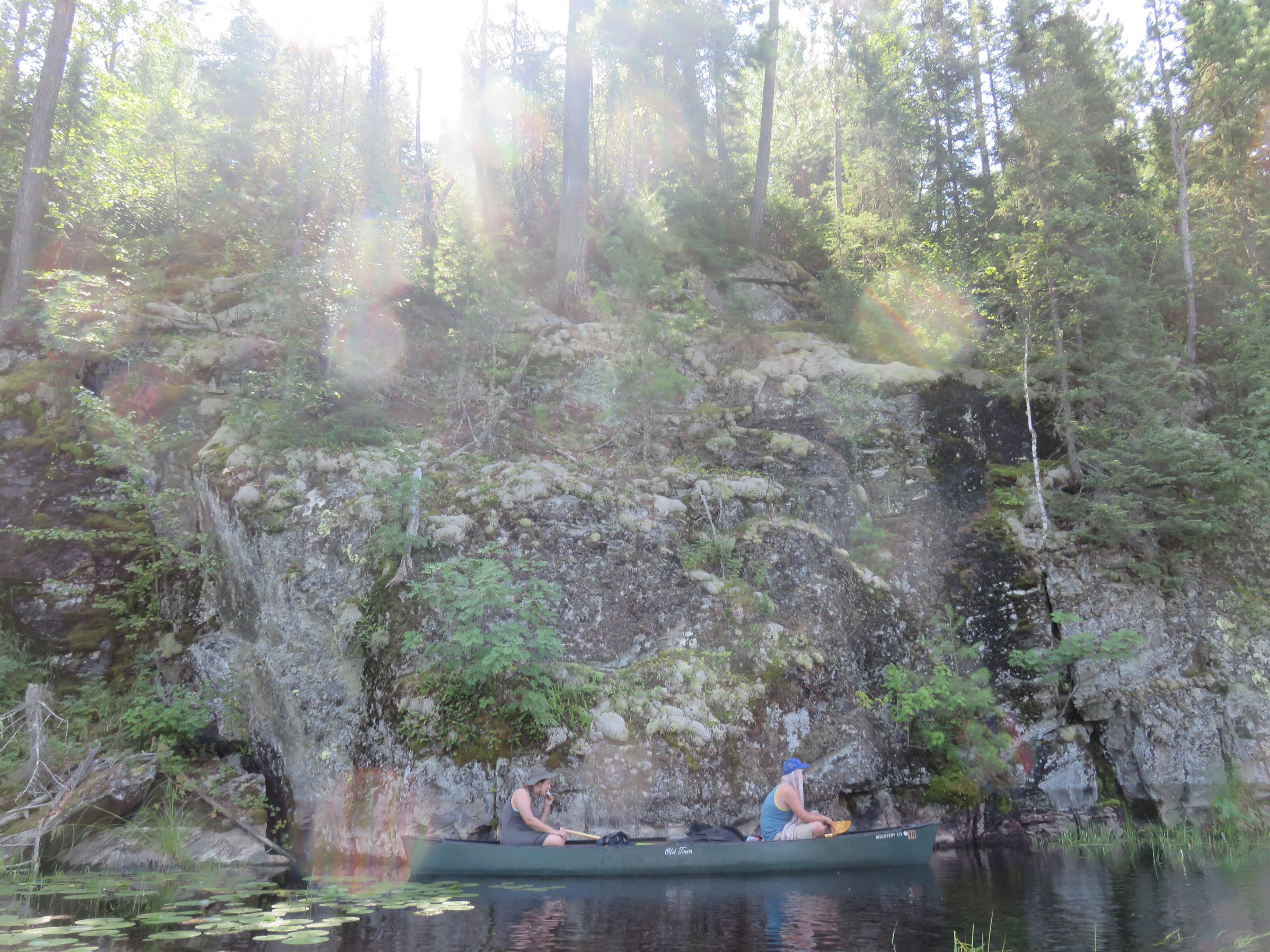 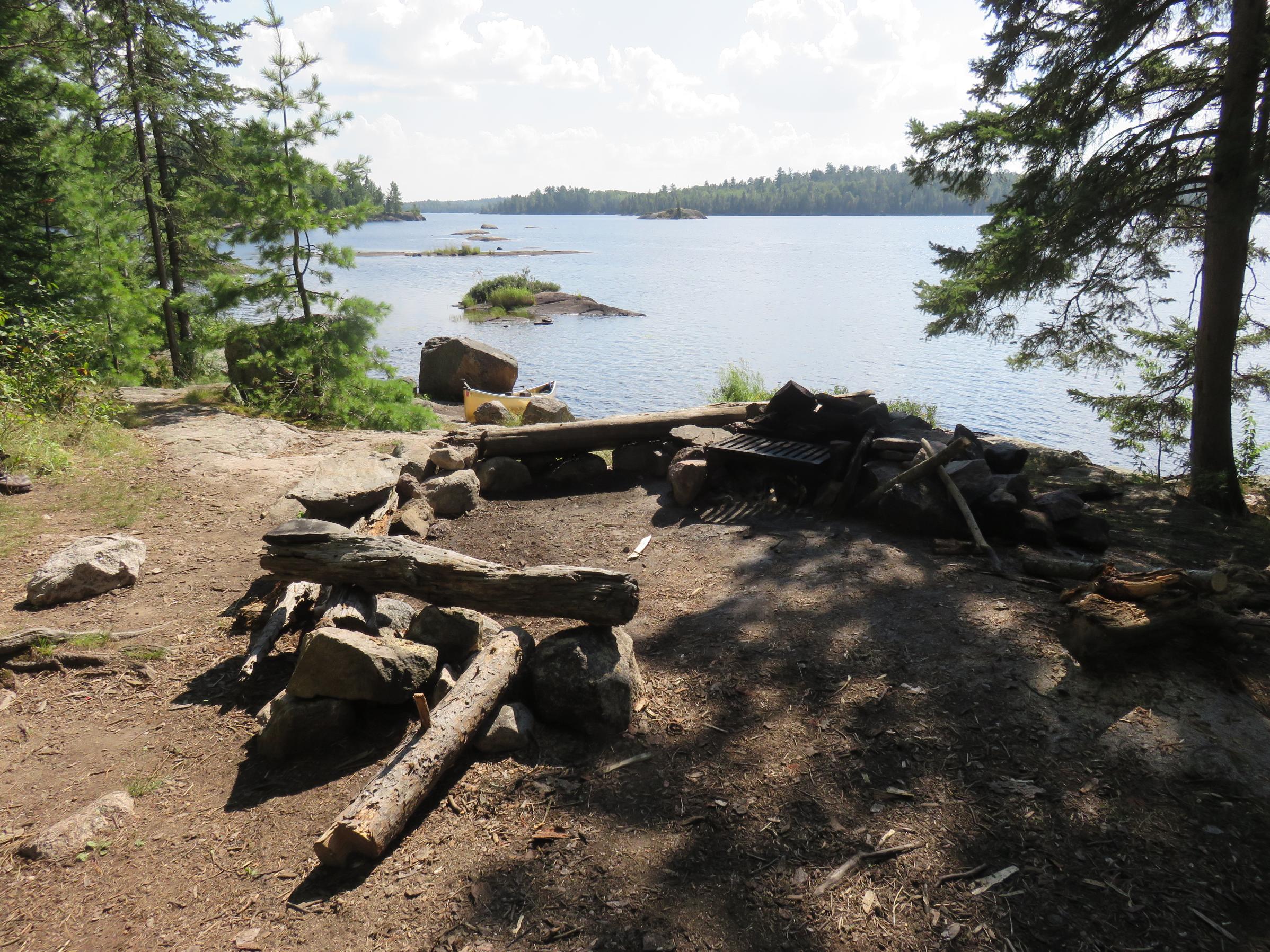 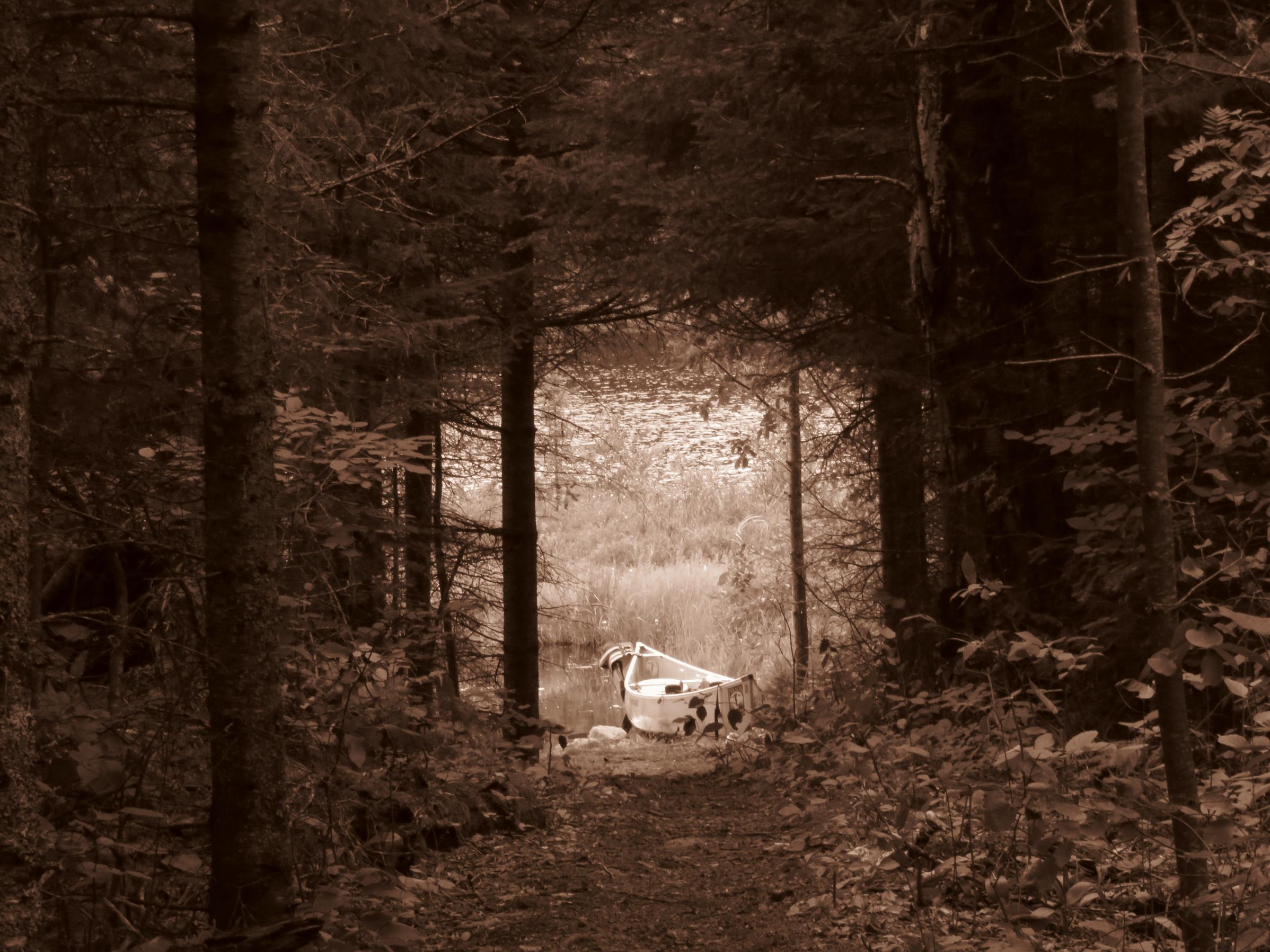 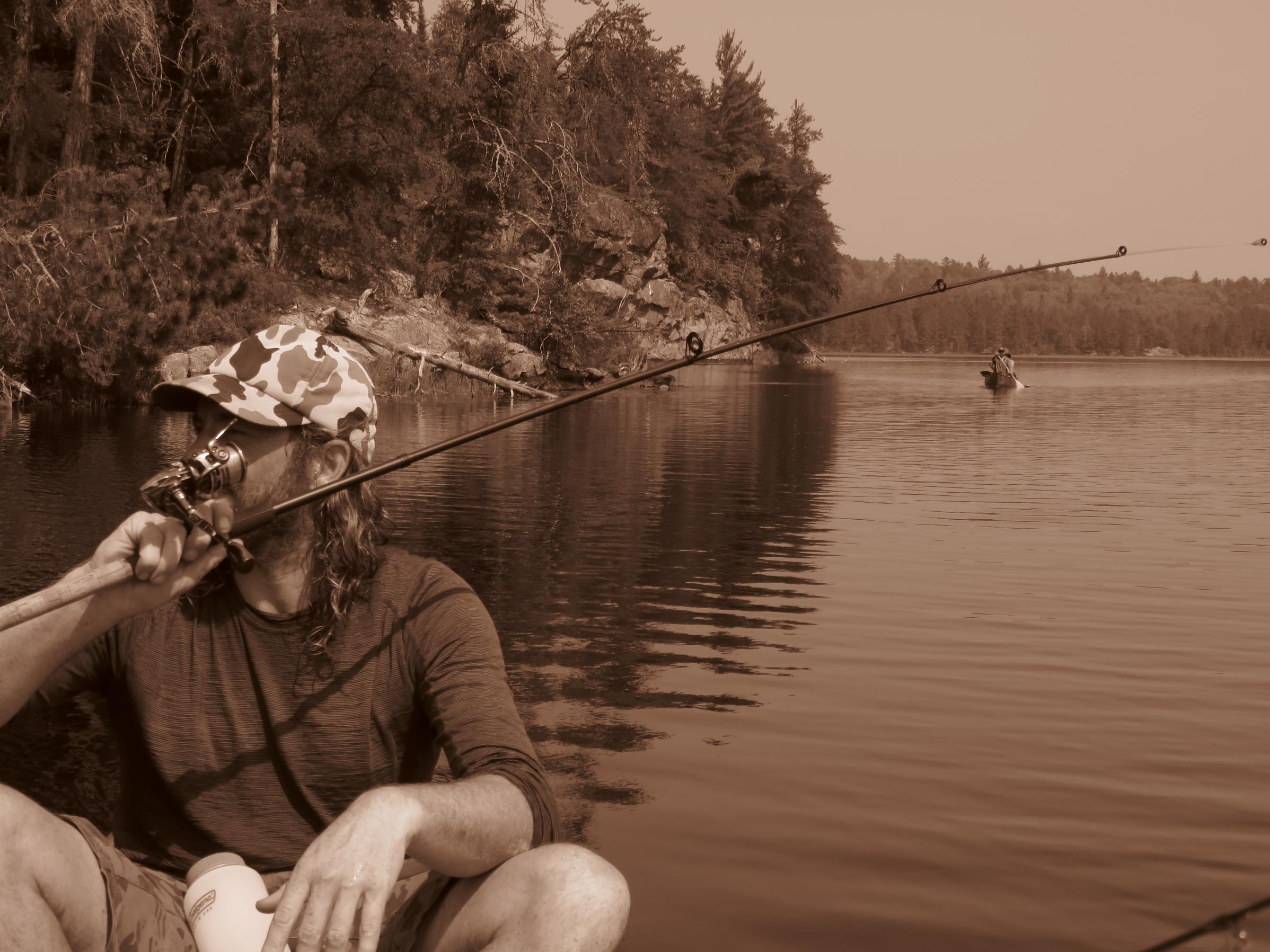 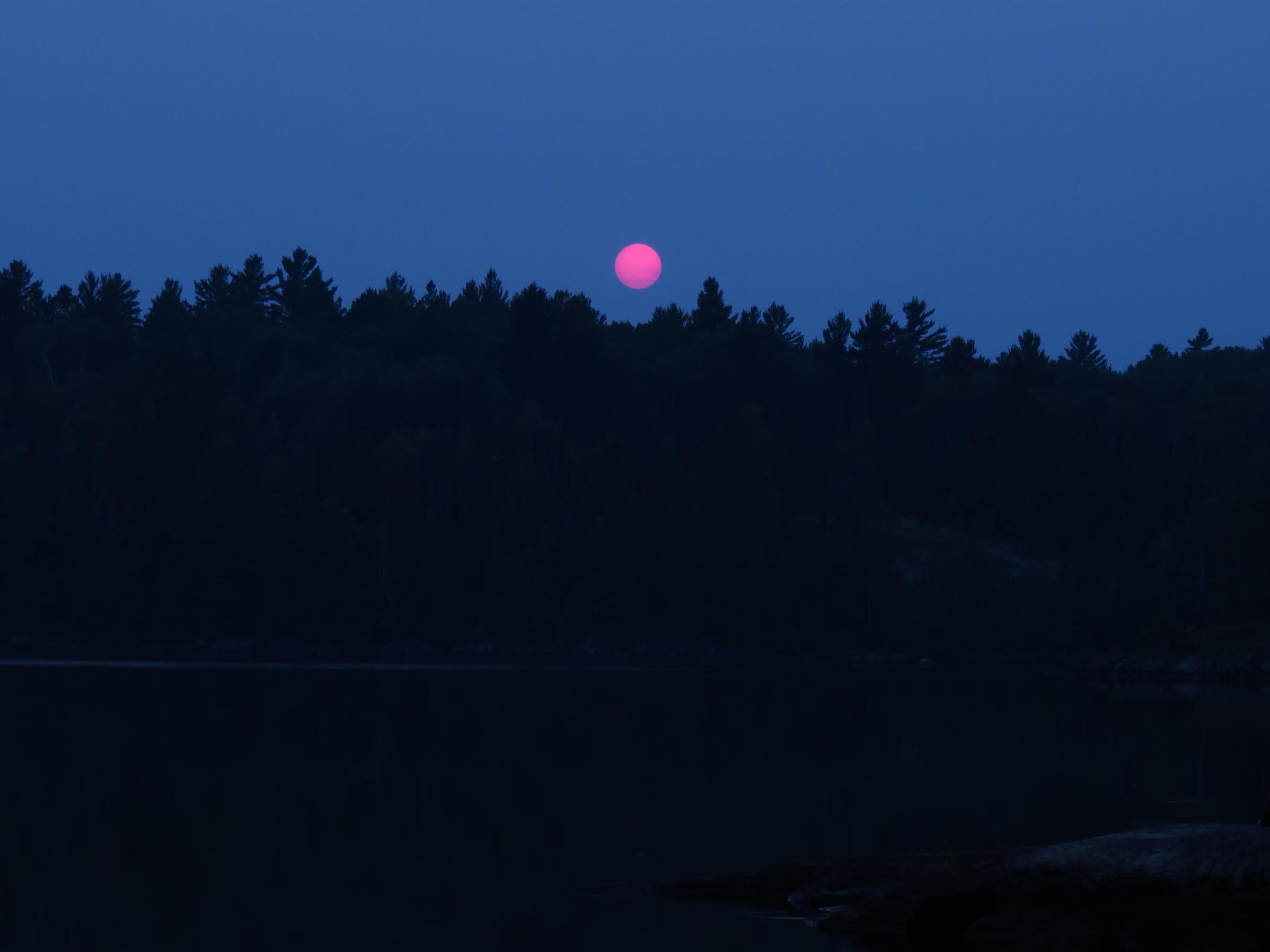