Trip Type: Paddling Canoe
Entry Date: 08/12/2018
Entry & Exit Point: Mudro Lake (EP 23)
Number of Days: 6
Group Size: 2
Trip Introduction:
This was to be our first foray into the world of canoe camping. My son and I entering at #23 Mudro and paddling the loop up and around Crooked Lake and back down through Moosecamp Lake and Fourtown lake.
Discuss Trip: View Discussion Thread (7 messages)
Day 1 of 6
Intro

The stillness of the morning woke me with a start. Unaccustomed to such quiet, I awoke thinking something must be wrong. I opened my eyes and stared at a foreign scene. Above me, an expanse of grey speckled in dark brown.

“My tent!” I realized. The grey nylon and mesh were speckled with sap from a previous camping trip under some leaky white pines. I lay quietly for a moment, unaware of the time and only briefly aware of the root under my sleeping bag. Crawling from the tent and into the early dawn of the day I stood, stretched and breathed in the beauty of my surroundings.

Directly in front of me lay a small expanse of flat glass water with several islands speckled throughout. The eastern far side, no more than a quarter of a mile away, was our neighboring nation of Canada. To the South of me lay a narrow channel with steep rising sides of granite which gave it a feel of an entry into another world. To the north, a highway of water leading to everything and anything I had not yet discovered and behind camp to the west rose a small mountain of granite that towered above everything else in the area and begged to be climbed and explored.

Nothing moved, not a wisp of wind not even a stir of a dragonfly’s wings. The air was already heavy with the heat of the upcoming day, yet the sun remained hidden behind the eastern tree line. Sun parched moss and lichens clung to the granite surfaces that made up the floor of our camp and they crunched underfoot whenever I stepped off the main camp area. The shadowy silhouettes of the trees soon gave way to deep green boughs and lush treetops as the sun began to creep over the tree line. It gave definition to the world around me that only moments ago was left up to my imagination. Both were equally beautiful.

By the time the sun had hit me square in the face I had already boiled water and ran it through my French Press coffee cup and I was standing on the first of two tiers of granite ledges that lined the front of our camp. Fishing rod in one hand and coffee in the other I set out casting a crankbait around the edges of the camp. My campmate, my son Joe, lay sound asleep in his bag inside the tent.

It was late in the year 2017 when an internet acquaintance announced his plans to visit Quetico with his son for a 30-day adventure. His name is Mike and his job is to travel all over Canada seeking out top-notch fly-in fishing outfitters and reporting in his magazine. He had helped me with a fly in trip in 2017 which would turn out to be, most likely, my Fathers last fly-in fishing trip. I had never heard of Quetico before, so a quick Google search revealed another universe. This ultimately led to my discovery of the BWCA and how easily one could have an adventure quite like my father and I’s beloved fly-in trips. Dad has been battling chronic heart failure since 2017 and is now currently on the heart transplant list. I did not want to give up on my yearly adventure trip, so I recruited my stepson Joe and the fire was lit.

After countless hours of research and YouTube videos and calls to VNO in Ely, we set our sights on entry #23 Mudro Lake in August of 2018. The plan was to enter at first light on Sunday the 12th. The trip route would be Mudro to Lower Basswood Falls the first day via the Horse River. Camp 1 would be somewhere in the vicinity of LBF. The second day would be a camp somewhere in Wednesday or Thursday bay of Crooked Lake. Day 3 would have us in Friday Bay and day 4 would see us travel the small lakes of Papoose, Chippewa, Nikki, and Wagosh across the tip of Gun and into Bullet lake and into Moosecamp Lake for a 2-night stay. Day 5 would have us running the Moosecamp Lake River down into Fourtown and out to Mudro. Day 6 would see us on our way home.

The trip did not go exactly as planned, in fact, the only thing that was the same was the actual route. 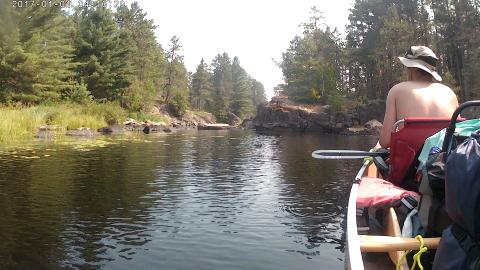 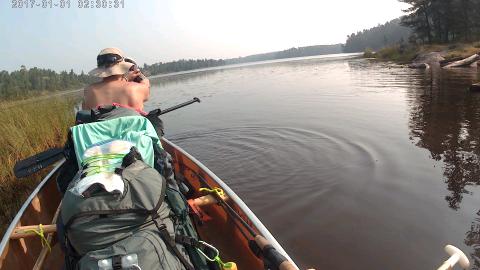