Trip Type: Paddling Canoe
Entry Date: 09/12/2018
Entry Point: Little Indian Sioux River (north) (EP 14)
Exit Point: Moose/Portage River (north) (EP 16)
Number of Days: 4
Group Size: 1
Trip Introduction:
My September 2018 trip was 3 days of solo travel before meeting a party of 4 good friends for 3 days of basecamping. The solo portion began at LIS entry in the BWCA before traveling the Namakan river to skirt Voyageurs national park, then returning to the BWCA via the Loon river. I had trouble finding a detailed description of the river, so I wanted to put together a trip report to share some beta in case others are considering this route.
Discuss Trip: View Discussion Thread (13 messages)
Day 1 of 4

Day 0: After driving to Ely and picking up permits, I had dinner and a couple beers at Rockwood- the first time I had ever eaten there. The food hit the spot, the Tuesday night bar staff was friendly, and the beer list was fantastic. I then began the long, dark drive up the Echo trail to arrive at Little Indian Sioux entry about 11:30pm. Slept in the back of the car and was fresh to go the next morning.


Day 1: I woke and ate my customary doughnuts and frappachino for breakfast before packing the canoe and getting on the portage trail just after 8. I’d never entered LIS before, and I began the winding paddle north in a damp September morning fog. The company was just me, a shy beaver, and a couple of trumpeter swans.

The funniest thing happened on the river: I came silently up on a lone Canada goose floating along the shoreline. I was about 20yards away when it first noticed my presence, and it immediately took off to fly away from me downriver. The only problem was that in its haste it did not see the dead log bent out over the water about 12 feet in front of it. The goose flew head-on straight into the log with a loud “smack” before falling over backwards into the water. I thought for a moment that I might get to eat fresh goose for a first night meal, but after a minute it did right itself in the water and spent some time shaking itself out. The poor goose looked downright bewildered and it no longer seemed to care about the human so close. It was just slowly regaining its composure as I paddled on by. Incredible.

Upper and Lower Pauness lakes each held one party I could see: a quiet sleepy tent on the former, and a group of scout-age boys fishing from shore on the latter. As I paddled toward the portage to Loon lake, I imagined that one of the boys in the large group is the quiet, introverted boyscout I once was. He sees the sleek solo canoe glide through the lake mist- and off to an adventure scripted only by the whim of the man paddling it with quick switching strokes in an unbroken, practiced rhythm. The boy never before realized that there are canoes made for only one person, and he will remember that moment- tucking it away to later influence his future adventures silently exploring wild places.

The water table was not especially high this time of year, and the Devil’s cascade was no roaring falls. It was a very scenic portage though; descending through the shaded gorge. Once out onto the main basin of Loon lake the sun began intermittent appearances through parted clouds and drove the fog away: signaling that midmorning had begun. I was feeling good in open water, and upped the pace as I happily paddled northwest across the lake. I followed the Canadian shore north to Beatty portage, and up into the western side of Lac LaCroix. I had paddled by here previously, but never stopped to look for the pictographs. I did find some faded images at the base of the big cliffs, but not nearly as spectacular as the ones on the eastern side of the lake.

I snacked on my lunch as I went north on Lacroix, and the sun came out more and more to make for a fairly nice afternoon. Wind was moderate from the northwest, but no big waves to contend with. Once I turned the corner to head east, I was in the best part of the lake. I love the north part of Lacroix- with the dozens of islands holding mature white pines: all with exposed rock ringing the shoreline. The motorboats of the Canadian side are far enough away not to bother you, and the camps are remote enough that you rarely see another paddler. I was planning to camp somewhere up here tonight, to make an early crossing of the lake and enter the Namakan river tomorrow morning. An east wind was starting to build and while I was relatively protected amongst the islands of Lacroix, my internal weather radio was going off, “nothing good ever comes from an east wind” I thought. Time to find camp.

The site I chose was right on the border just north from Takumich lake. I circled the small island with the red dot twice without seeing any sign of a camp. I pulled the canoe up on shore and began exploring. The island is shaped something like a budding yeast cell, and as it turns out, the campsite is located in the middle of the island at the isthmus where the two cells are dividing. The camp is accessible from either side, and it appeared to be used little. It was not a large camp, but was perfect for my needs. It was just after 3:00 and I thought I could hear distant thunder from the west, so I didn’t waste time in putting up the hammock and tarp- choosing a sheltered spot that did not involve the tallest trees on the island to give me some peace of mind. I had water and a snack, and was happy with the 22 miles I had put in today. I sat in my chair with the camera tripod pointed out west over the lake, and shot long exposures of the horizon, hoping to catch one of the strong bolts of the approaching electrical storm. As the rain shadow closed in, I retired to the hammock for an afternoon nap beneath the pitter patter of rain on the tarp, glad I had chosen a good spot out of the wind. 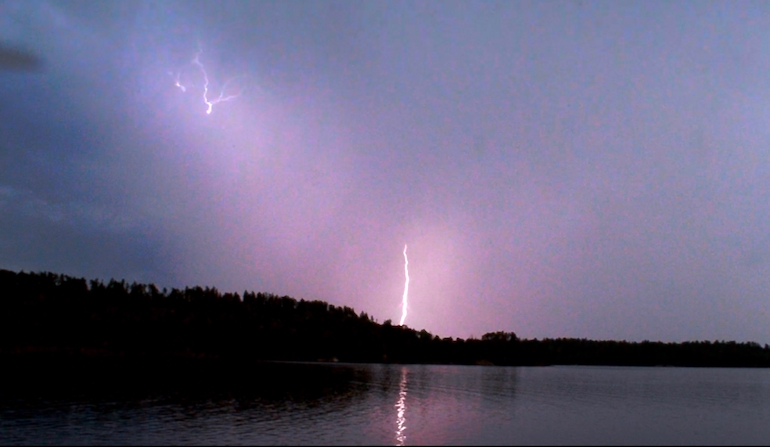 I awoke around 7pm to a bright sun low in the western sky that was illuminating the towering thunderheads that had moved off to the east. The air was still and peaceful, and I rehydrated my dinner. I sat on the lakeshore with the camera as I sipped bourbon and watched the sun set over the islands of Lacroix. As darkness closed, I again curled up into my hammock, falling asleep after hearing the very distant sound of wolves across the lake somewhere south of me. 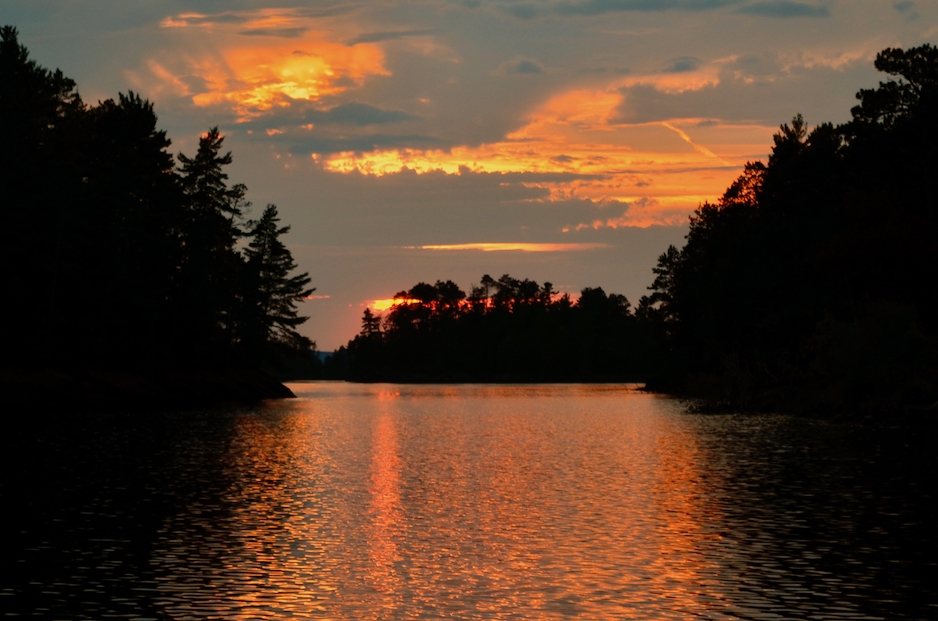