Trip Type: Paddling Canoe
Entry Date: 05/25/2019
Entry Point: From CANADA (EP 71)
Exit Point: North Fowl Lake (EP 70)
Number of Days: 3
Group Size: 2
Trip Introduction:
This is a story of setting a goal and giving it everything we had, mentally and physically, across Voyageur’s National Park and the Boundary Waters. Many have asked how we broke the longstanding record by a full 11 hours. It was simple. After a great first day with favorable conditions, we were too committed to let our good start slip away, so we hung on grimly until the finish. There were beautiful moments enjoyed in the most pristine corners of the wilderness, with incredible stars, sunrises and sunsets, a rainbow, a black bear, and peaceful glassy waters. There were moments of fun and laughter as we pushed through goals, ran rapids, cheered each other on, and met family and friends. There were moments of weakness, discouragement, and frustration in the damp cold and dark, struggling to hold together and depending on each other to push through. The pace was grueling and relentless. We were too driven to pause and admire all the places we would have liked to enjoy. Attempting this challenge meant sacrificing many of the good and renewing aspects of a wilderness canoe trip, but now that our crazy goal is complete we can finally relax and return to enjoying the wilderness in the way we love.
Discuss Trip: View Discussion Thread (36 messages)
Part 1 of 4
Preparations:
After Matt and I completed the Kruger-Waddell Challenge from International Falls to Lake Superior at Grand Portage in 97.5 hours in September 2018, we had genuine respect for the 80 hours 40 minutes established course record set in 1968 by Verlen Kruger and Clint Waddell. We also thought we understood what it would take, at least in theory, for a tandem team to shave off 17 hours from our time, in order to give the Kruger-Waddell record a serious challenge.
We were also aware, through BeaV, of an International Falls to Grand Portage claim of 78.5 hours by Dan Litchfield and Steve Park of Ely, in a MN 3 circa 1996 via the Namakan River route. We believed this record and set our goal to beat it too.
First of all, we knew that we had slept too much in September. We stopped for an average of 4 hours on each of the 3 nights, then we slept another 1.5 hours at Partridge Falls before starting the Grand Portage. That came to 13.5 potential hours that could be cut if we were tough enough to continue at the same pace without any sleep. Second, we knew that Kruger and Waddell’s route was 21 miles shorter. In September 2018 we started at the far western end of Rainy Lake at the Rainier City Beach, the location chosen by BeaV and GrandmaL for the September challenge, but Clint and Verlen started 9 miles farther east at Sha-Sha Resort and took the Dawson Portage shortcut through Canada, shaving 12 miles off the standard Loon River route. At a 4 mph average, 21 miles might amount to another 5 hours of savings, for a total of 18.5 hours in savings. Enough to beat the record? Perhaps, but barely! 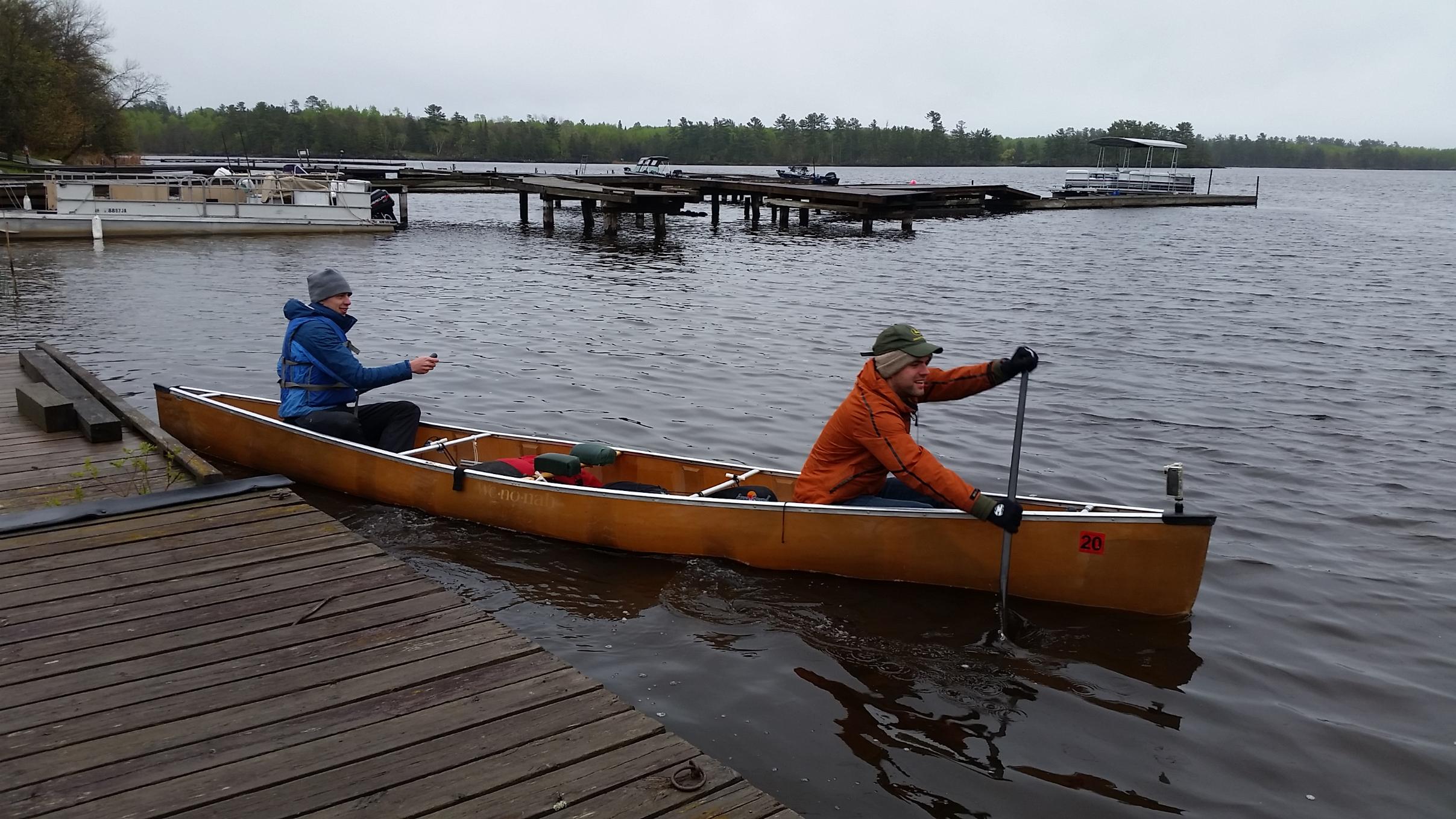 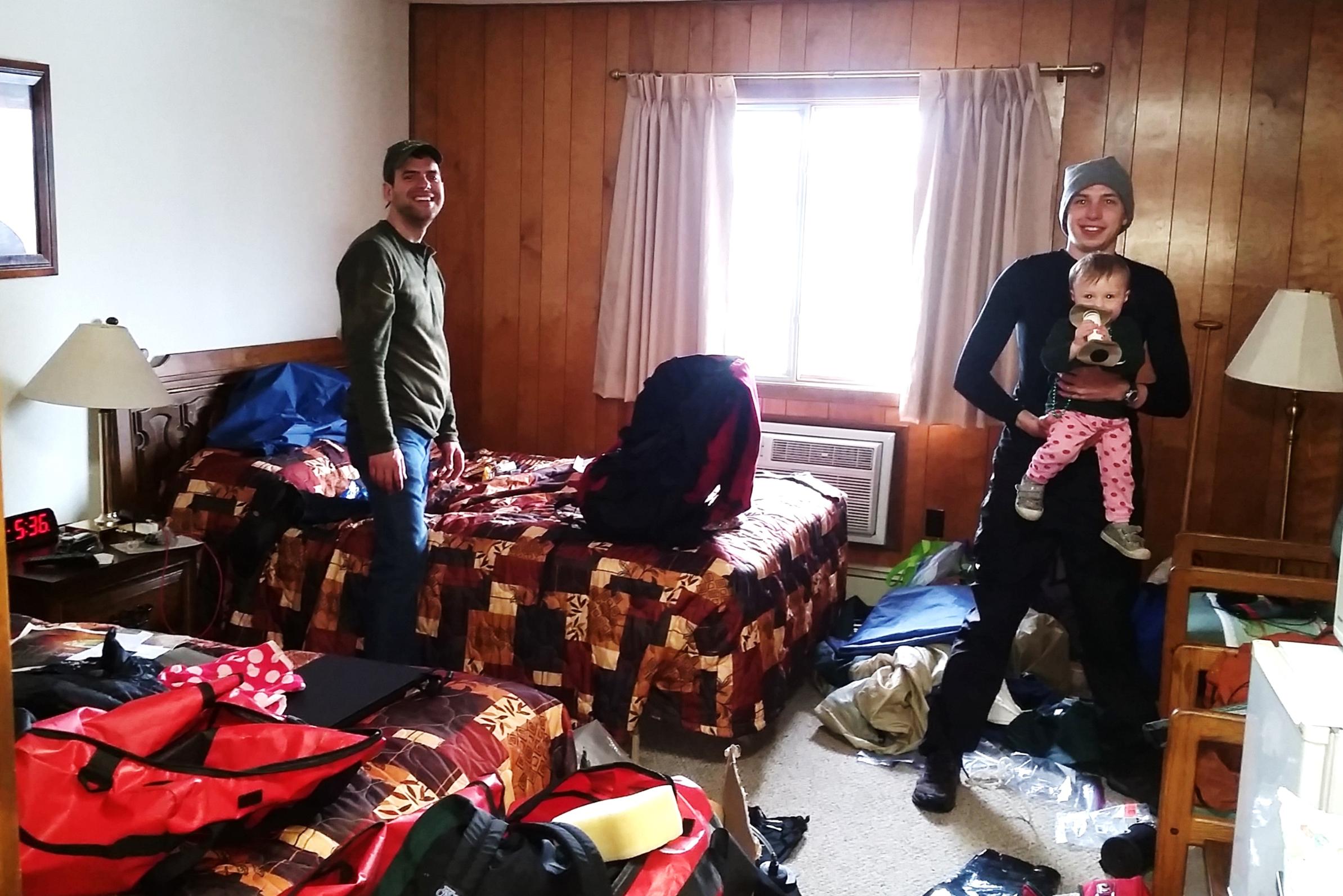 Packing our food and gear at a hotel room in International Falls on Friday the 24th.
Matt was responsible for figuring out the diet, planning for 80 hours of intense paddling. He decided that we would add Tailwind (a glucose-based endurance powder) to all our lake water. We didn’t think it would be wise to survive on Tailwind alone, despite the advertisements claiming this is possible. Matt packed lots of tortillas, peanut butter, Cliff bars, Snickers bars, and 3 Musketeers bars, as well as Ready-Rice packages and MRE (Meal, Ready to Eat) entrees with flameless heaters so that we would have something warm and comforting to eat. We dumped olive oil on everything, and gulped it down like a drink. Matt’s planning was excellent, except that he packed more food than we needed (since we went faster than anticipated), so I ended up carrying a lot of uneaten weight in the food bag on the Grand Portage.
As for miscellaneous items, we packed bivy sacks in case of very bad weather, as well as a single sleeping bag for emergencies. Matt upgraded our Wenonah MN2 canoe with bucket seats and foot braces. We mounted a timelapse camera to the bow in hopes of filming the attempt (but the lens came loose after 12 hours of paddling). We had a spare headlamp and a spare paddle, which turned out to be our single most critical piece of gear. We brought nothing else except spoons, some basic first-aid items, ropes and bungees, a Thermarest pad, and the clothes we wore. After I broke my paddle we wished we had 5-minute epoxy to repair it – let future challengers take note.
We arrived in International Falls on Friday, having obtained our BWCA entry permit for Saturday, and spent the day at a hotel organizing our stuff and anxiously watching the weather and wind forecast. The final regional forecast which we studied (and memorized!) on Friday night is shown below. We were very pleased about the consistent west wind forecasted to start after 6am and continue all day Saturday. This was our ticket to success, and we realized that Saturday would have to be the biggest mileage paddling day of our lives. We decided that we would aim for at least 75 miles in the first 24 hours in order to get ahead of schedule, and just try to hang in there after that. We were also pleased about the clear skies for navigation on Saturday night. We worried about the cloudy skies on Sunday night and the east wind on Monday, but tried not to think about it too much.

Weather forecast from windy.com for the days of our border route attempt.