Trip Type: Paddling Canoe
Entry Date: 05/25/2019
Entry Point: From CANADA (EP 71)
Exit Point: North Fowl Lake (EP 70)
Number of Days: 3
Group Size: 2
Discuss Trip: View Discussion Thread (36 messages)
Part 2 of 4
Day 1, Saturday May 25 – Sunday May 26:
On Friday night we did a practice launch at Sha-Sha, then ate a big meal of poutine and burgers at the Border Bar in International Falls. I slept poorly, waking up frequently and thinking about what could go wrong in the days ahead. This was frustrating because I knew I needed to be rested up in the morning. At 4:30am I checked the wind forecast and saw that the wind would be changing to the west sooner than we expected. I woke up Matt and my wife Rebecca and we hurried to get everything in the car. We drove to Sha-Sha Resort at the end of the Island View Peninsula, arriving in the gray dawn with the west wind already changing. A gentle drizzle was falling that continued for most of the morning. We rushed to load the canoe and get on the water, pressing the OK button on the SPOT tracker to mark the official start time of 6:00am on the dot. 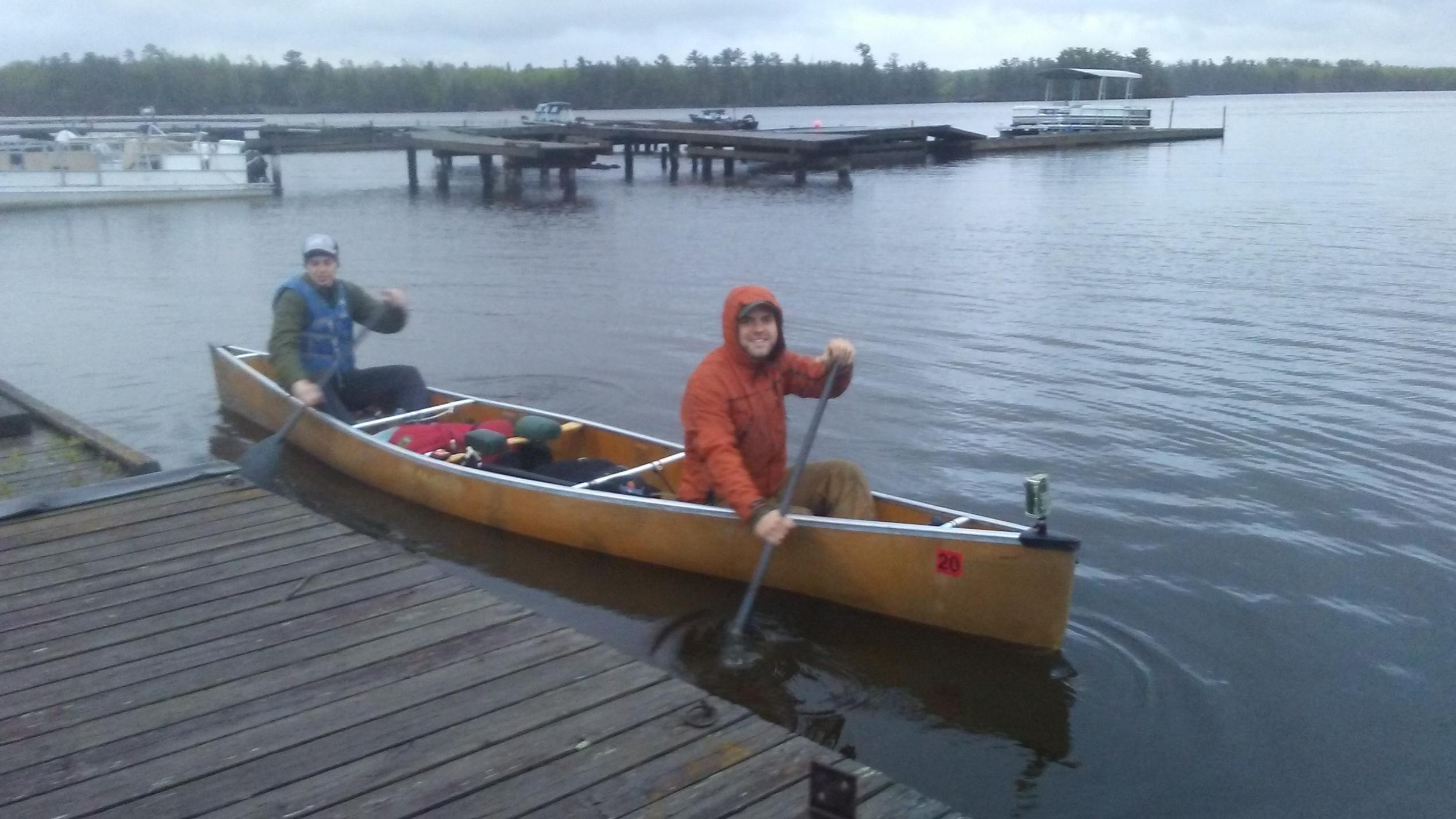 The actual launch from Sha-Sha Resort at 6:00am on Saturday May 25.
Heading southeast across Black Bay, the still-changing southwest wind was not a huge help, slowing us down a little bit with some larger waves that we had to pay attention to. Feeling anxious about navigation, I worried that I might have aimed for the wrong bay for the mouth of the Ash River, but we were fine. 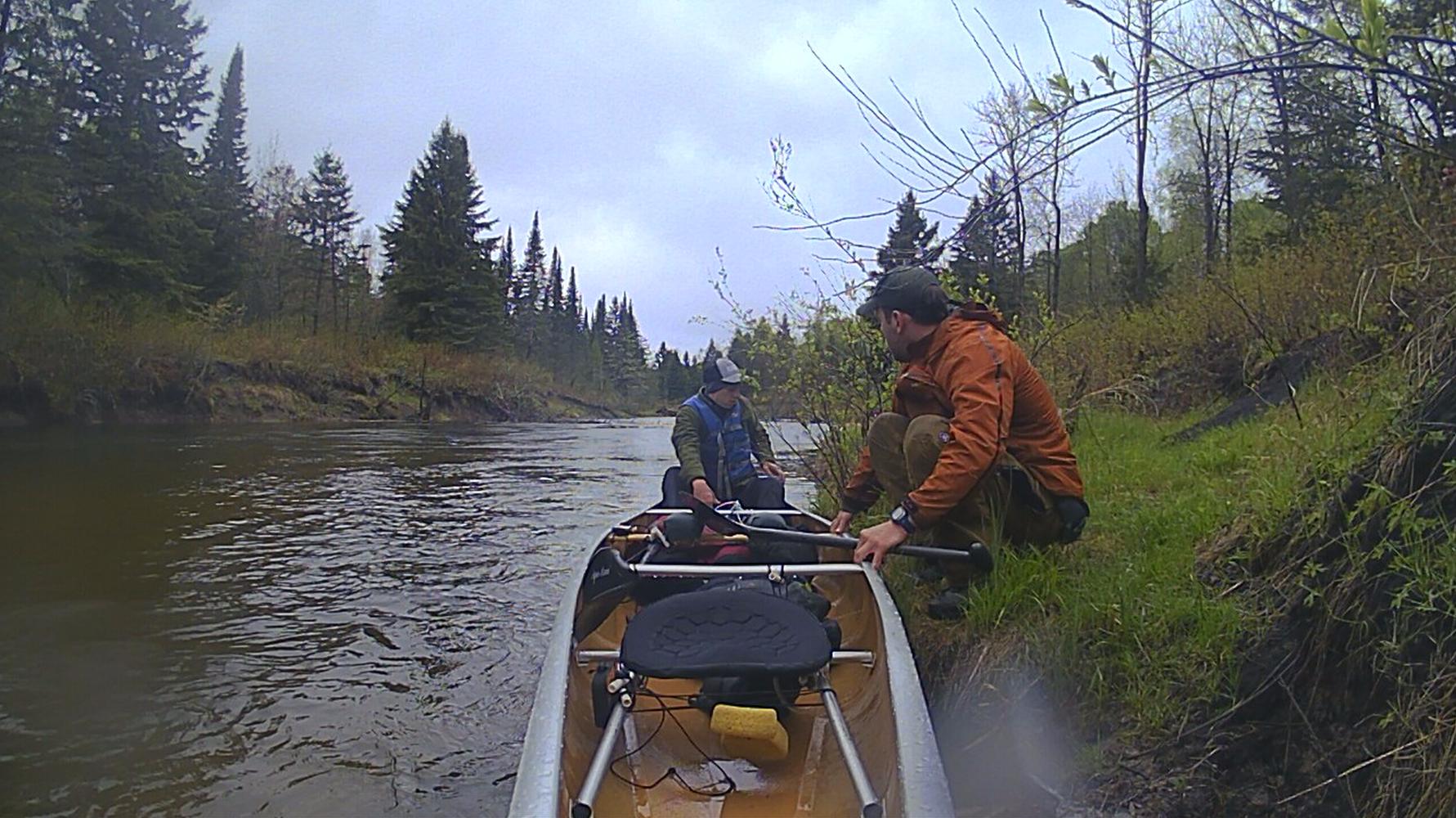 Starting the Gold Portage on the Ash River.
Less than an hour after our departure we were heading upstream as quickly as possible, over the short Gold Portage, then up a few more bends to Kabetogama. The west wind was blowing medium sized rollers, perfect weather to shoot across the big lake. Staying out in the middle south of Cutover Island, we aimed for the gap that looked like the right place to squeeze through the narrows. It was. So far so good. 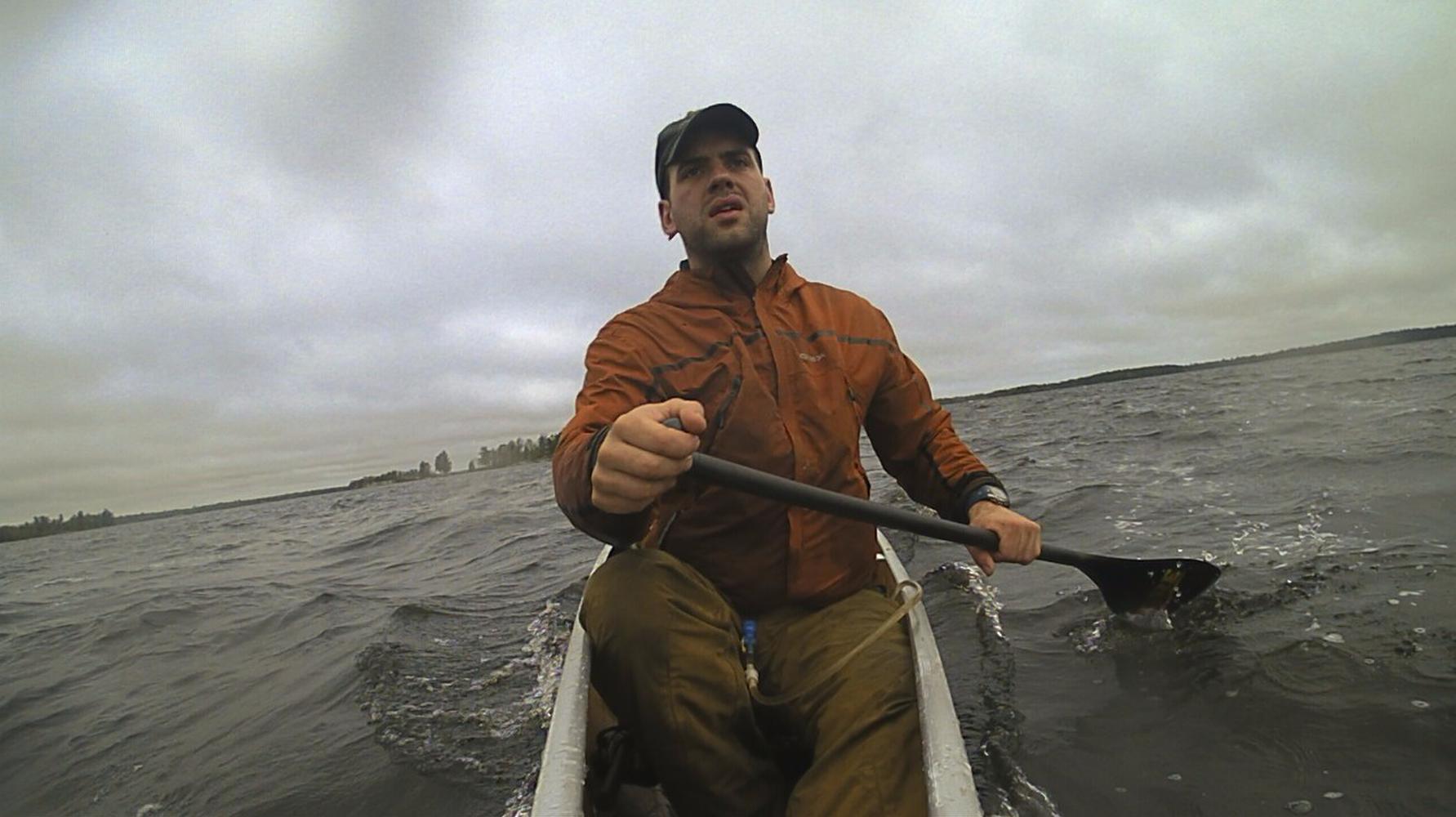 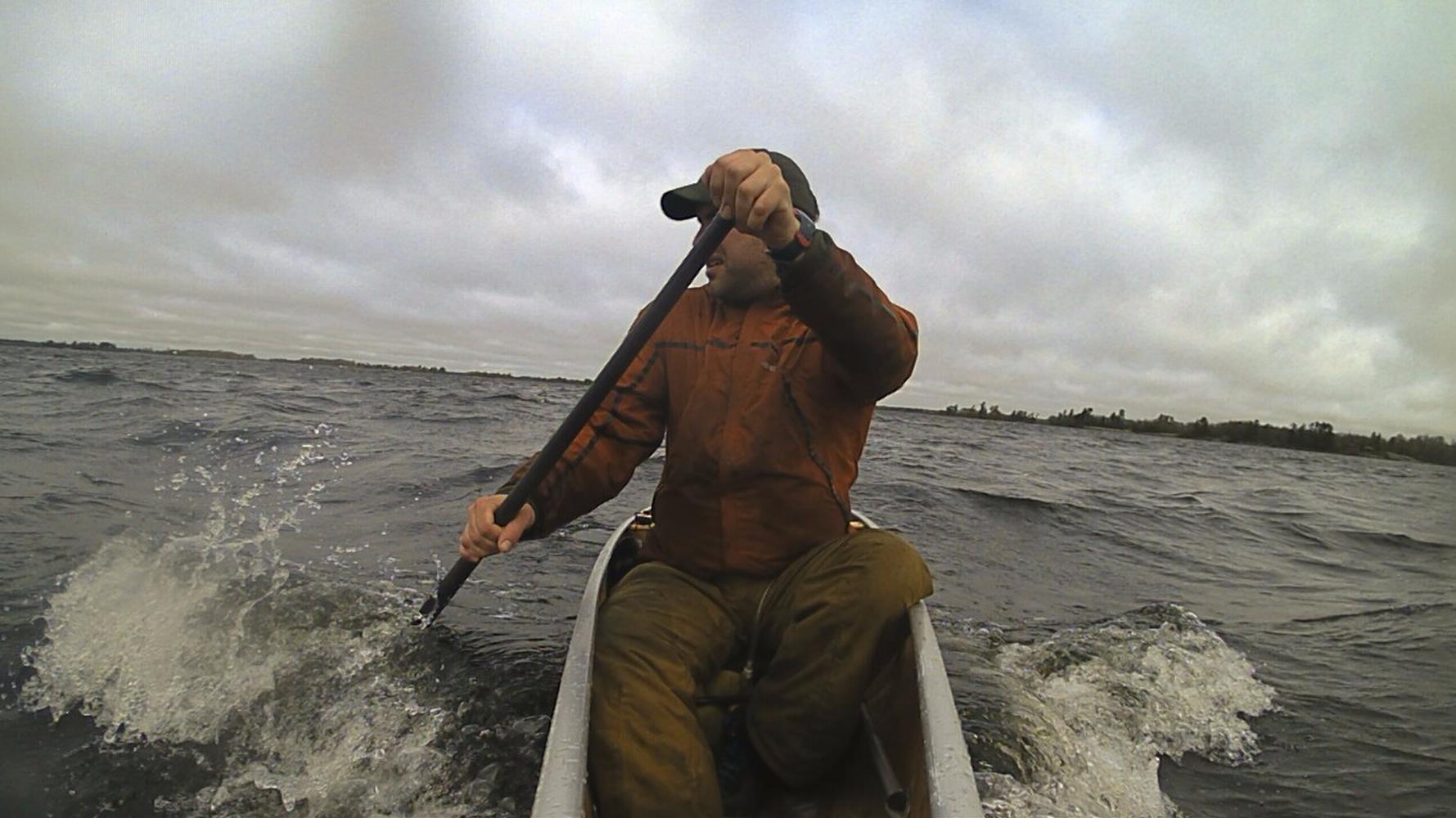 Big water and rollers on Kabetogama.
Matt called out the hours and I called out the miles. We were doing almost exactly 5 mph, motivated at the end of each hour for a push to reach another 5 miles. We drank our Tailwind steadily, pleased that it actually tasted pretty good. After 5 hours we were crossing the maze of islands dividing Kabetogama and Namakan. Sometimes I wasn’t sure we were exactly on course, but we always breathed a sigh of relief when we saw an island or bay where we expected it to appear. I worried about accidentally turning up the ominously-named Lost Bay, which would have looked fine for hours before we realized we were miles off course.
The west wind calmed a bit, which was nice because I no longer needed to drag my paddle like a rudder each time a roller swept under the canoe and tried to surge us off our heading. We fairly flew across Namakan, turned the corner down to Grassy Bay, and reached the landing at Grassy Portage in just under 7 hours at 12:38pm. Already ahead of schedule and delighted with the progress!
Grassy Portage in spring should be renamed Swampy Portage. On this and all the other portages, Matt carried the canoe with a small daypack, while I carried the food in a CCS hybrid canoe pack. The wet portage was unpleasant, but we pushed through. On the other side, Matt dropped the canoe, and that’s when disaster struck. Unused to the new way Matt had bungeed my paddle under the rear seat, I tossed the heavy food bag on top of my paddle and snapped the shaft in half. I was very upset about my mistake, so early in the trip. We had the spare bent paddle, but it was heavier – mostly plastic instead of carbon fiber. I must use that one from here on, and we were only 35 miles into a 216 mile trip. If Matt’s carbon paddle broke, our trip would be over and our great start would be squandered. Not only that, but as we left the portage I realized that I had left my warm hat behind at the beginning of the portage. We now had only one warm hat between us, and 3 cold nights ahead. Two serious mistakes at once, and both my fault. 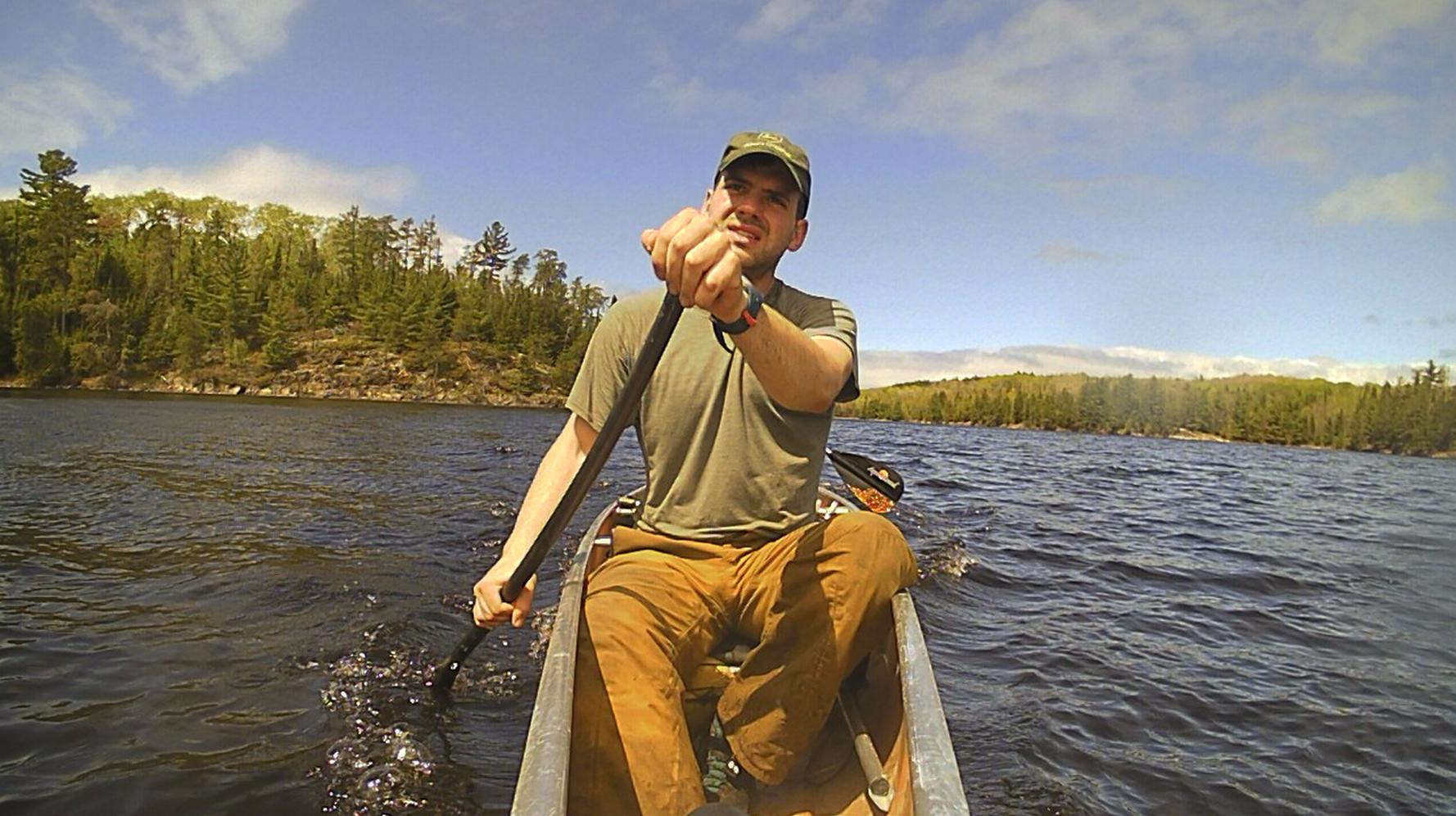 Sunshine and perfect conditions on Sand Point Lake.
I apologized to Matt. There was nothing to be done but get back on the water on Sand Point Lake. Before long I was accustomed to the heft of the spare paddle, and it worked fine. Sand Point Lake was uneventful, still cruising 5 mph behind a gentle tailwind. We passed the 40 mile mark at a narrows on the international border, then turned left into Portage Bay to find the Dawson Portage on the Canadian side, reaching the portage landing in just over 8.5 hours at 2:37pm. A tongue-in-cheek sign at the start of the 4-mile portage read, “Rest Area: 4 miles”. We started up the first climb on the 2-track gravel road, munching on candy bars and drinking Tailwind. The portage runs for most of its length along the north rim of an overflowing creek filled with swamps and beaver dams. It was therefore muddy and buggy, but not too bad. I got some distance ahead of Matt and startled a young black bear on the trail a few yards ahead of me. Unlike the 5 moose and 1 bear we saw on the September run, this was the only large animal either of us saw. 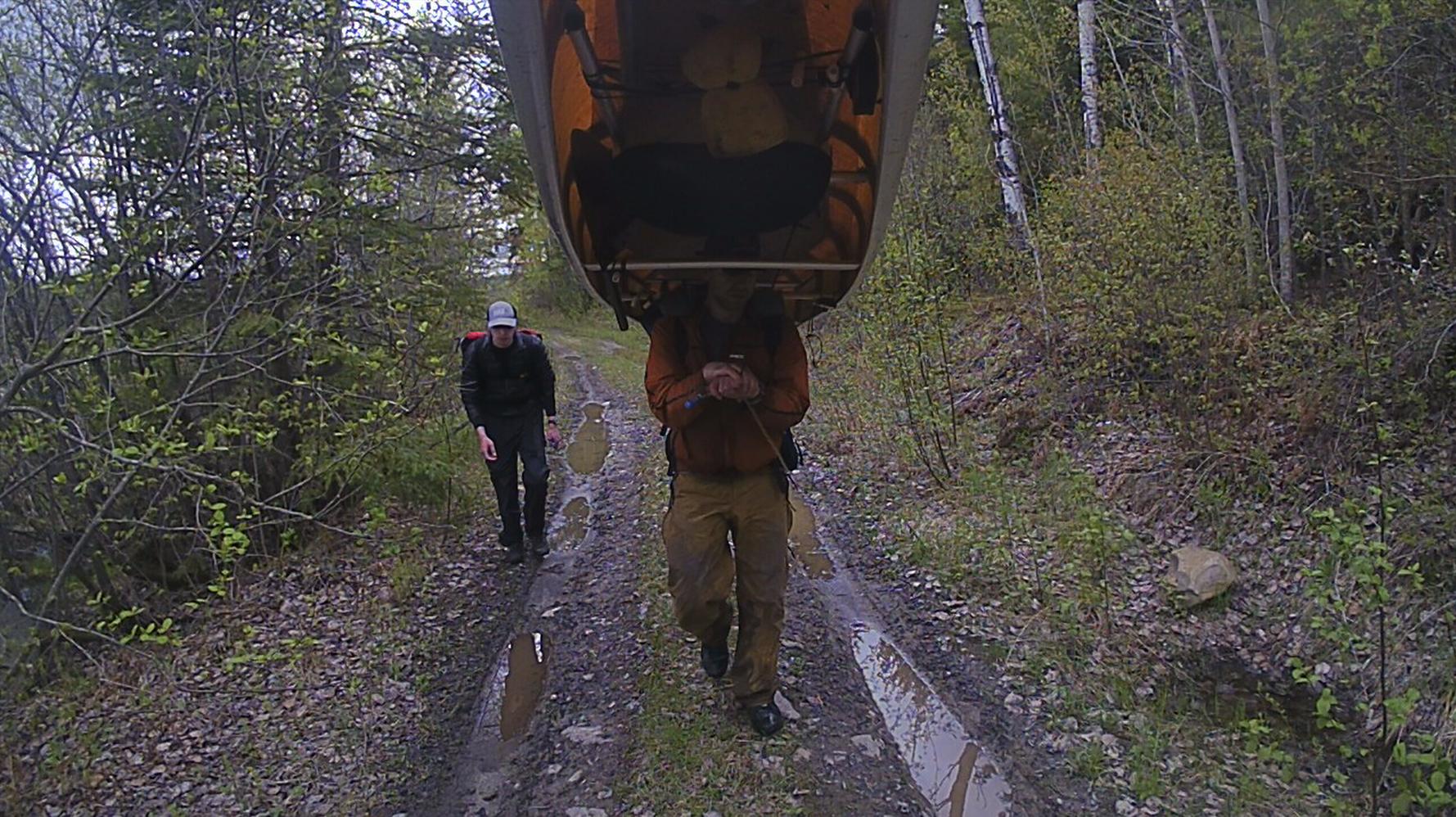 On the Dawson Portage.
The Dawson portage was plenty long enough. It was littered with abandoned busses and trucks, used over the decades to haul people and gear over the shortcut to the fishing camps on Lac LaCroix. It caused us to drop an hour off our 5 mph average, but that was hardly unexpected. When we finally got to the “rest area” on the other side, we were ready for a 10 minute break. Then back on the water across the Wilkins Bay arm of Lac LaCroix, to reunite with the border a few miles farther on. The 5 mph pace was becoming a chore. Turning north, the now northwest wind was briefly not in our favor, but then we turned east again to go across the top of Lac LaCroix. There was little to talk about, just the occasional comments about which point or island we were passing and how fast we were going. Amazingly, we realized that we were ahead of pace to do 100 miles in 24 hours, far better than we had hoped. If only we could hang on through the night, we could cross Crooked and maybe reach Basswood by sunrise.
The islands at the top of Lac LaCroix can be tricky to navigate, but we slid through without incident. Then there is a long, slow crossing of a big bay far from shore, which seems to drag by. The wind was mostly calm, and the miles were still clipping. After 13 hours and 60 miles at 7pm we turned south to shortcut around Coleman Island. Through Fish Steak Narrows, the wind was still gently blowing from the northwest, perfect conditions. Down the final miles of Lac LaCroix as the sun got low, and we pulled up to the Canadian side portage to Bottle Lake right at sunset, 15 hours from Sha-Sha.
As the sun went down I started to get chilly without a warm hat. We needed something warm, so we heated up a rice pouch and an MRE for supper. Seeing that I was shivering, Matt offered me his wool hat. He graciously let me wear it for the rest of the trip, using his windbreaker hood as his only head covering. We took a 10 minute break at each end of the portage, then felt better.
The warm food and the hat helped, but now we had our first challenge of night-time navigation on Bottle Lake and Iron Lake. We watched Mars rising in the southeast, and the Milky Way came out. Often through the night I found myself using Mars as my reference, staying a few degrees left of that heading. We followed the north shore of Iron Lake, found the channel we were looking for and popped out within earshot of Curtain Falls, exactly where we wanted to be.
The Curtain Falls portage went quickly, then back on the water on the western end of Crooked Lake. It was very dark now, but all night long the bright starlight created enough of a glow to make out the silhouettes of islands and shorelines. We picked our way past island after island, constantly checking the map. Suddenly Matt spotted a string of bright lights in the sky, directly overhead and moving fast. We watched them in amazement for about 2 minutes as each light brightened and dimmed, wondering what they were. Perhaps it was a satellite or large meteor that had broken up into many tiny pieces? After the trip we learned that it was the SpaceX Starlink launch, bringing the first cluster of 60 broadband internet satellites to orbit.
The hours wore on. The 5 mph pace was long gone, more like 4 mph now. I found myself continually shaking my head in order to clear my mind and focus on navigation. If I was already getting tired, how would the next days go? Not long after midnight I made a couple minor navigational errors. Once I ended up 100 yards left of the point I needed to hit and ran into an island, but we soon figured it out. Another time I expected a channel between two islands to open up in a place where none appeared. Then I thought I saw the correct channel, but we found ourselves heading southwest instead of southeast. Retracing our steps and going a bit further, we located the channel with only a few minutes’ delay. As we started to turn due south on the eastern side Crooked, the moon finally rose at 2:30am. It was orange and weak, and did not help. We passed a campsite with a roaring bonfire, no doubt they wondered what we were up to at that hour. Slowly we crawled south, ticking off the miles one by one toward the end of the long and challenging 17 mile lake. The sky grew slightly gray, and the temperature dropped. We passed the pictographs and decided to take a shortcut portage through Greer Lake, avoiding Lower Basswood Falls and leaving Crooked Lake at 3:22am. That portage, along with one out of Greer, were both crummy and overgrown, but they were mercifully short and we were very glad to stretch our legs and put Crooked Lake behind us.
Cruising up the Basswood River at 4am, we realized that it might still be possible to reach the 100 mile mark just south of American Point on Basswood Lake within 24 hours. That motivated us to redouble our efforts. We hurried up the rapids and started the long Basswood Portage. Without hesitation we jumped back in on Basswood Lake at 4:50am, stroking hard and glad to see the sunrise. Regaining a 5 mph pace for a few miles, we passed the spot which I estimated to be 100 miles just as Matt’s watch chimed 6am, the end of the first 24 hours.