Trip Type: Paddling Canoe
Entry Date: 05/25/2019
Entry Point: From CANADA (EP 71)
Exit Point: North Fowl Lake (EP 70)
Number of Days: 3
Group Size: 2
Trip Introduction:
This is a story of setting a goal and giving it everything we had, mentally and physically, across Voyageur’s National Park and the Boundary Waters. Many have asked how we broke the longstanding record by a full 11 hours. It was simple. After a great first day with favorable conditions, we were too committed to let our good start slip away, so we hung on grimly until the finish. There were beautiful moments enjoyed in the most pristine corners of the wilderness, with incredible stars, sunrises and sunsets, a rainbow, a black bear, and peaceful glassy waters. There were moments of fun and laughter as we pushed through goals, ran rapids, cheered each other on, and met family and friends. There were moments of weakness, discouragement, and frustration in the damp cold and dark, struggling to hold together and depending on each other to push through. The pace was grueling and relentless. We were too driven to pause and admire all the places we would have liked to enjoy. Attempting this challenge meant sacrificing many of the good and renewing aspects of a wilderness canoe trip, but now that our crazy goal is complete we can finally relax and return to enjoying the wilderness in the way we love.
Discuss Trip: View Discussion Thread (36 messages)
Part 3 of 4
Day 2, Sunday May 26 – Monday May 27:
We were spent. There was a tiny rocky island on Basswood just a couple hundred yards away. We paddled straight to the little island and took a half hour rest in the sunshine, not sleeping but just sitting or lying on the rocks. My back was hurting from a full day of hunching over. I took some acetaminophen and we ate snacks. We were very happy with the progress so far, but uncertain if we had pushed ourselves too hard. We joked that we were currently on a sub-50 hour pace for the trip, but we knew that from now on we would have to slow down or risk burning out. Still, at this rate we might not need to try to go 80 hours without sleep. The faster we paddled the sooner we could sleep! 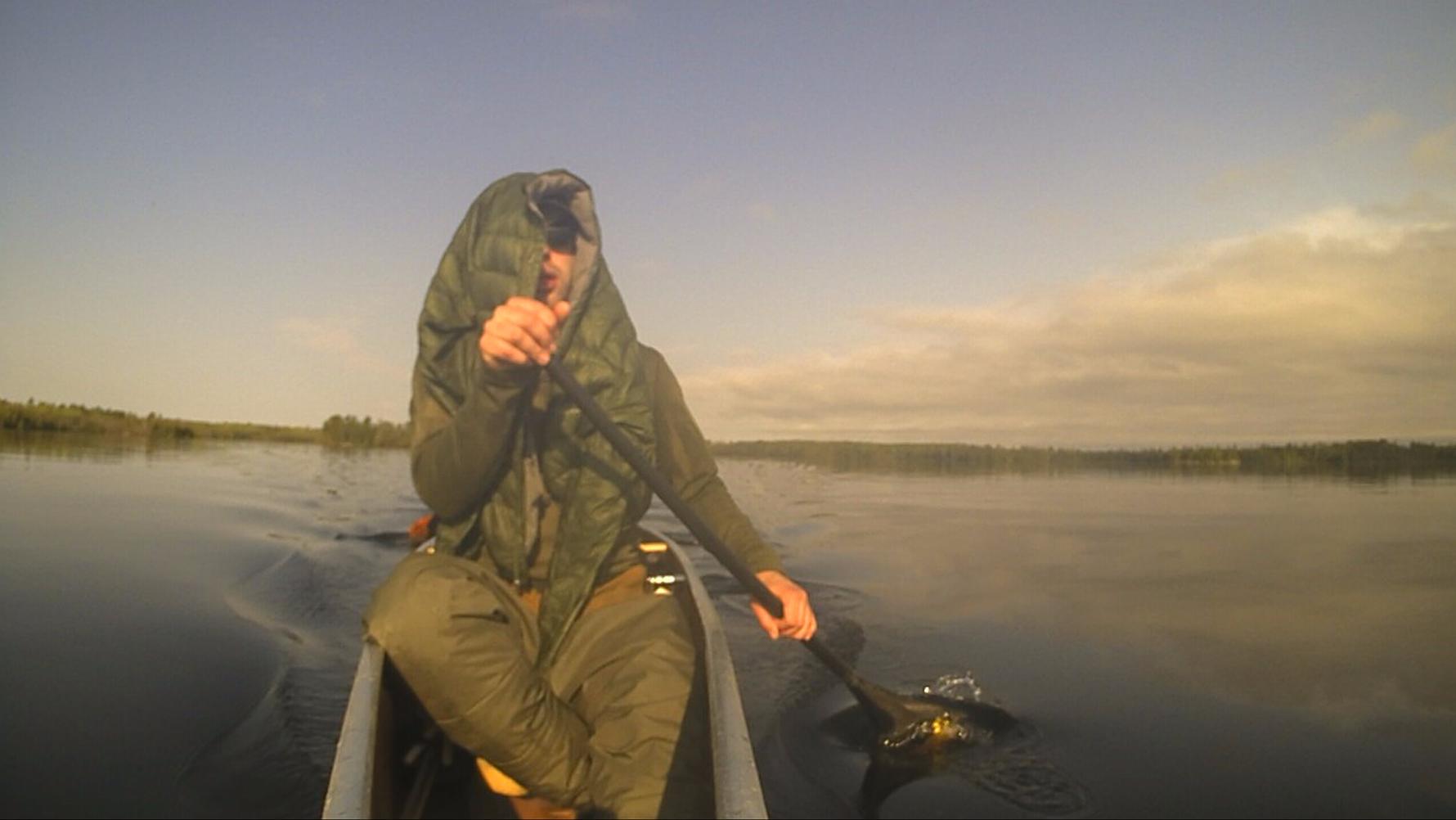 Dozing (and hallucinating?) in the sun while paddling across glassy Basswood Lake.
Crossing the rest of Basswood was almost like taking a break. Down to 4 mph, with the warm morning sun shining down and a big chunk of the route under our belts, we felt comfortable and more committed than ever to breaking the record. The wind was calm and the water glassy, as it had been all night long. We took a shortcut around Ottawa Island, then allowed ourselves to doze as we paddled across to Prairie Portage, passing the 108 mile half-way mark and reaching the portage at 8:45am. Our minds felt pretty foggy and disoriented in the warm sun. Matt started imagining faces in the trees around this point, and I found myself struggling more than usual to hold onto the heading.
I wondered if we were letting ourselves slack a little too much, but I couldn’t find the motivation to go any faster. The start and finish lines were too far away to think about. Ahead of schedule, we didn’t have a clear idea of how far we should try to go today. Remembering the 3rd day of the September trip in which we made it from Lower Basswood Falls to Gneiss Lake on the Granite River, we decided that we would shoot, at minimum, for a crossing of Gunflint before the end of this next 24 hour section. Since the weather was still nice, we needed to keep going strong. A 75 mile day would be good, if we could manage it. Up Birch Lake we cruised, seeing other paddlers on the water for the first time. The string of portages between Birch and Knife Lakes slowed us down a bit. 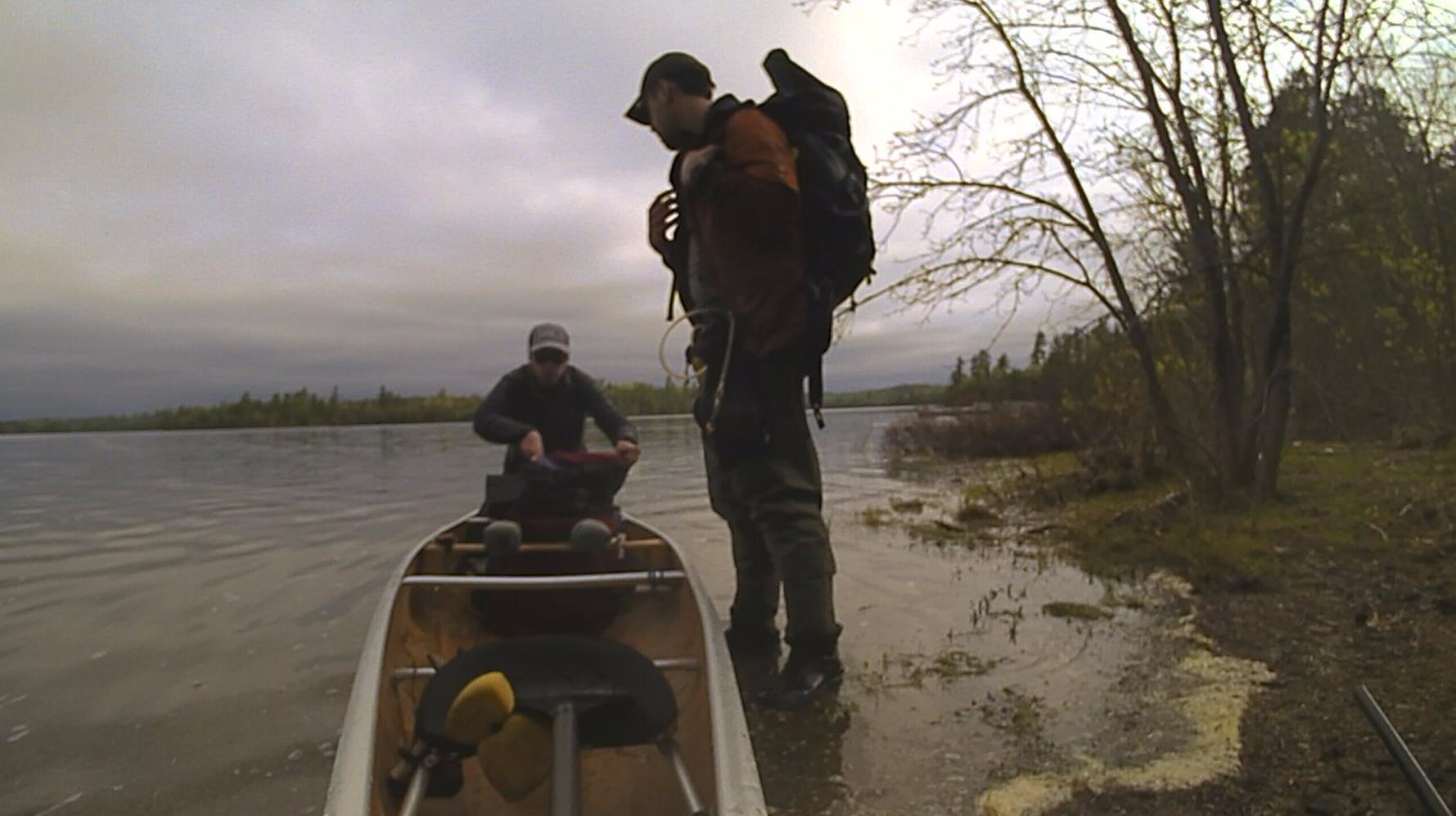 At Prairie Portage.
One paddler called out to me at a portage landing, “Knife Lake is beautiful! Enjoy!” I thanked him. “Where are you guys camping?” he asked. “Just passing through.” I replied without emotion. “Oh, what’s your goal?” he asked. “We’re trying to beat a Boundary Waters speed record. We haven’t slept much.” “Actually, we haven’t slept at all,” corrected Matt. “That’s nice, good luck!” he replied.
Some time later another guy called out, “Where are you two going in such a hurry?” “Grand Portage,” said Matt. “Well that’s a haul. I did the Grand a few years ago. Take a rest every 15 minutes, it works wonders.”
Since we had so little interaction with anyone but each other, these short conversations stood out in our memories. 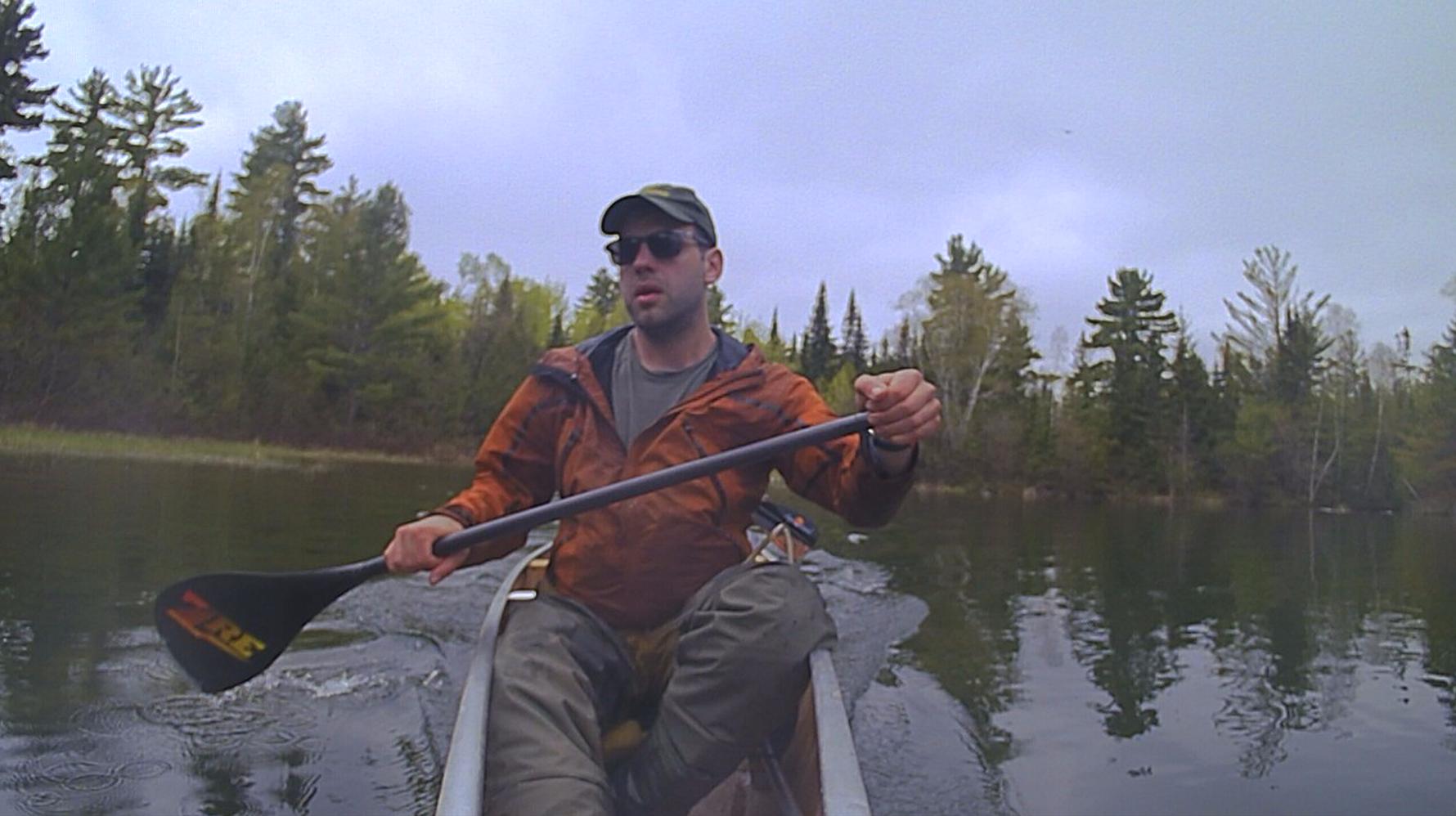 Paddling alongside Rebecca, Annika, and Peter and Ruth Preus on Magnetic Lake at 1am.
After we passed through the narrows and entered Gunflint, Ruth, Rebecca, and Peter waved goodbye and motored back across to the lodge to drop Rebecca and Annika off for the night. Alone again in the darkness, we were cheered and ready to make the crossing of Gunflint. Although we were both cold and soaking wet from our experience on the Granite River, we stayed warm by paddling hard. Following the Canadian shore, we kept going until 2:45am, when we passed the Preus cabins. Peter Preus was still awake, watching for our headlamps from his cabin. He got out his kayak and paddled out to meet us, surprising us in the dark. We were very glad to see him. He paddled alongside us for 2 hours and peppered us with questions all the way to the end of the lake and across Little Gunflint Lake, giving us an extra burst of momentum and the distraction we needed to power through the early morning hours. A northeast headwind began to blow gently, bone-chilling cold and getting stronger with each hour. My legs were cold so I wrapped them in our foam Thermarest pad to keep the wind from getting through the layers. Our neoprene gloves were soaking wet inside and outside, and did little to keep our hands warm.
Peter stayed with us until the short railway portage landing between Little Gunflint and Little North lakes. When we came ashore, we were both exhausted and I was very chilled. I curled up on the ground and shivered for a little while. We could tell that Peter wanted to help us with the portage, but instead he shook our hands and paddled back toward his cabin, as the gray dawn began to grow.
With one hour remaining until the end of the second 24 hour period, we needed to push hard to get warm and make some miles. We crossed beautiful Little North Lake and came out on North Lake, turning due south toward Height of Land Portage as a red sunrise came up, illuminating the mist and creating a huge rainbow in the west. Over the Laurentian Divide to South Lake, then most of the way across the lake before Matt’s watch finally chimed 6am. The second day was over, and although we had only done 67 miles, we reminded ourselves that (aside from yesterday) this was still the farthest we had ever paddled on flat water in 24 hours.