Trip Type: Paddling Canoe
Entry Date: 05/09/2019
Entry & Exit Point: East Bearskin Lake (EP 64)
Number of Days: 1
Group Size: 2
Trip Introduction:
I cannot say enough how proud I am of our daughter and her canoe camping skills she has developed over her short almost 8 yr life. She has been going to the BWCA since she was 8 weeks old and has over 16 trips in. However, this year will be the first year (hopefully many) that she and I will be embarking on mother/daughter BWCA trip(s) alone. Just as we did when we chose to take her in to the BWCA at 8 weeks old, I too, have evaluated this portion of our adventures in life. She and I have been successfully working our way from remote back pack in site camping at Bear Head State Park, to East Bearskin State Campground with a day paddle on East Bearskin and into the BWCA for a day trip. Both adventures have allowed me the opportunity to assess my own skill sets and to assess my daughter's skill level with the goals in mind of safety and of getting into the wilderness for an overnight BWCA Canoe Camping Trip.
Discuss Trip: View Discussion Thread (23 messages)
Part 1 of 3
Remote Base Camping: May 10th-May 12th. First on the path to our ultimate goal was assessing our th-current abilities and learning new capabilities with camping closer to civilization. Our destination for this trial would be at Bear Head Lake State Park where we would double “portage” our gear across the .7 mile somewhat rough trail to pack in site#1, on Becky Lake. The day before our trip I loaded the car with our gear and canoe as Aurora had school the next day and I had to work. The morning of our trip Aurora wore her “camp” clothes to school per her request. She was so excited to be going. In the car, on the way to dropping her off at school, she says “It smells like camping in here and I like that smell!” Thankfully I was able to leave work a few hours early and prior to picking Aurora up from after-school care, I rushed to get a fishing license and tackle as per Aurora’s request….she wanted to fish. A quick stop at Hardees and we were on the road towards Ely. 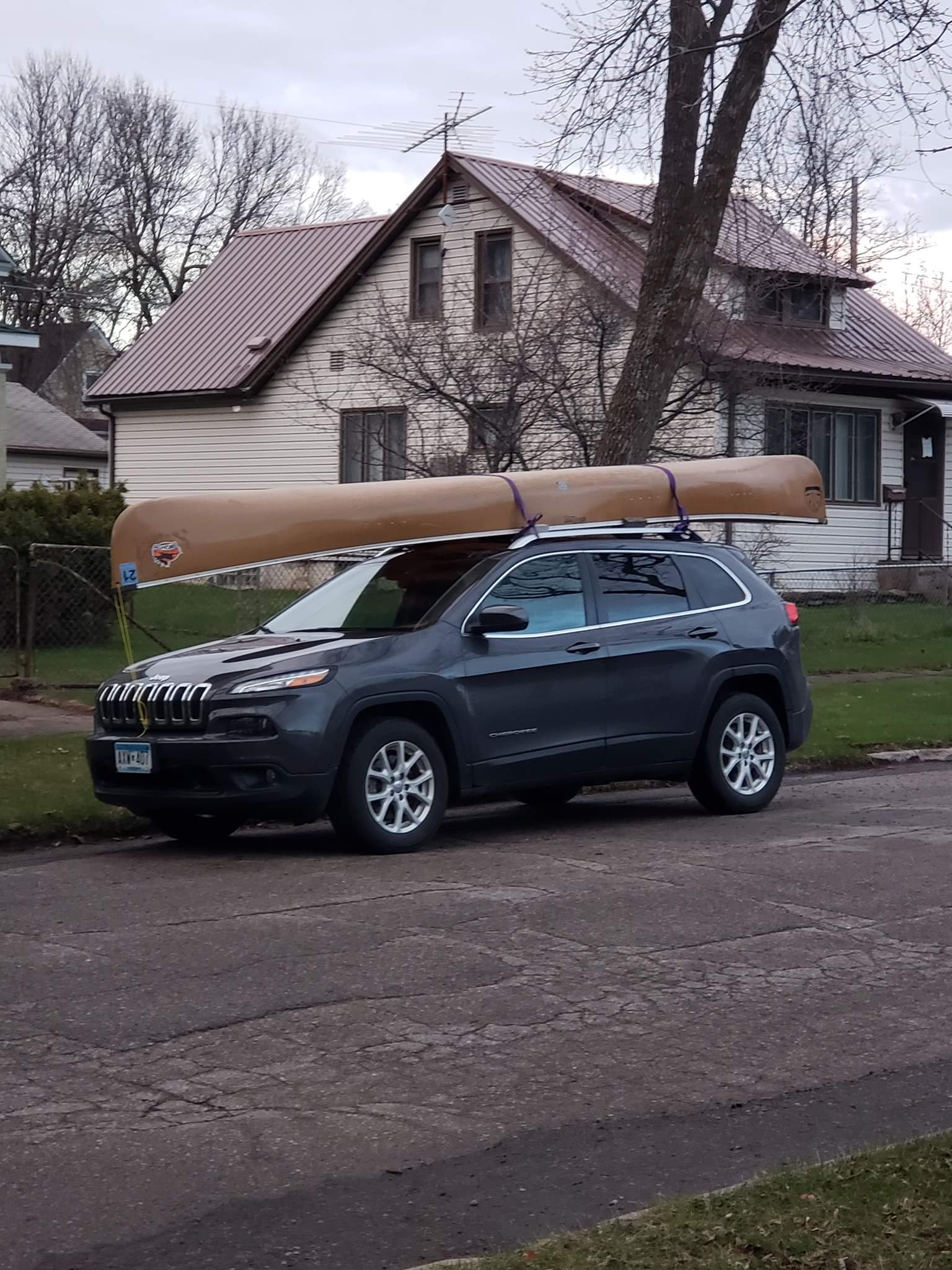 We arrived at the Park office at 4pm checked in and Aurora obtained a customary memento (stuffed fox). At the trail head we unpacked our car and loaded ourselves up for our first track across. This would be the first time for her to carry all her personal gear (save her chair). She made note when she put her pack on that “this is heavy”. She assured me it was not too heavy or uncomfortable for her and I reinforced with her that, as we have always done, if you need to take a break on the trail just let me know. At 450 pm we were finally set to begin this journey. We took 3 small 5 minute breaks and then we ended up deciding to leap frog after cresting yet another hill thinking the camp site has to be over this one and it was not. Ended up the camp site was located just over the next hill. We set to getting camp set up; Aurora picked up the twigs from around our campsite, found some birch bark and cleaned out the old soggy filled fire while I set up our tent, sleeping items and tarp. 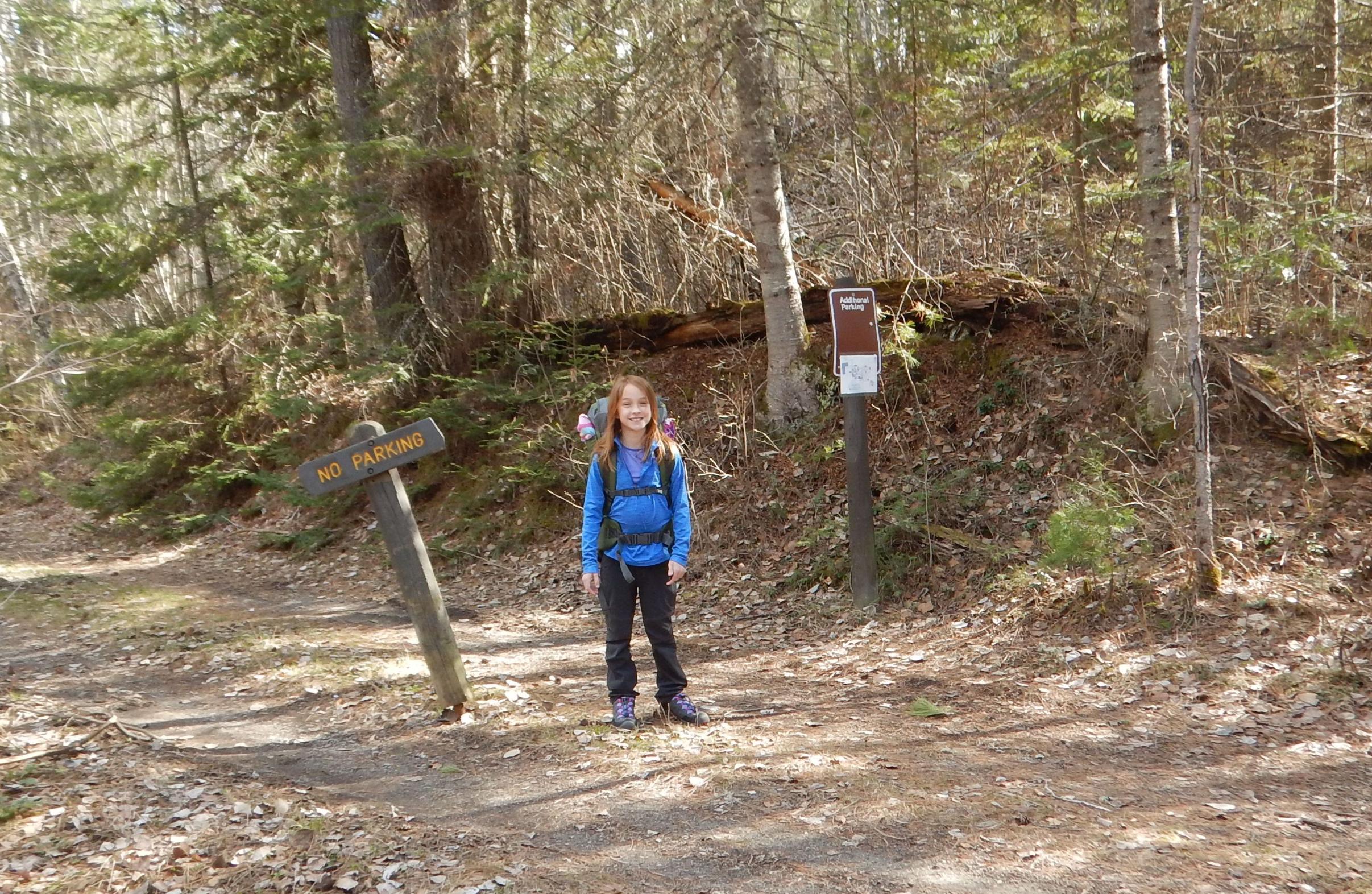 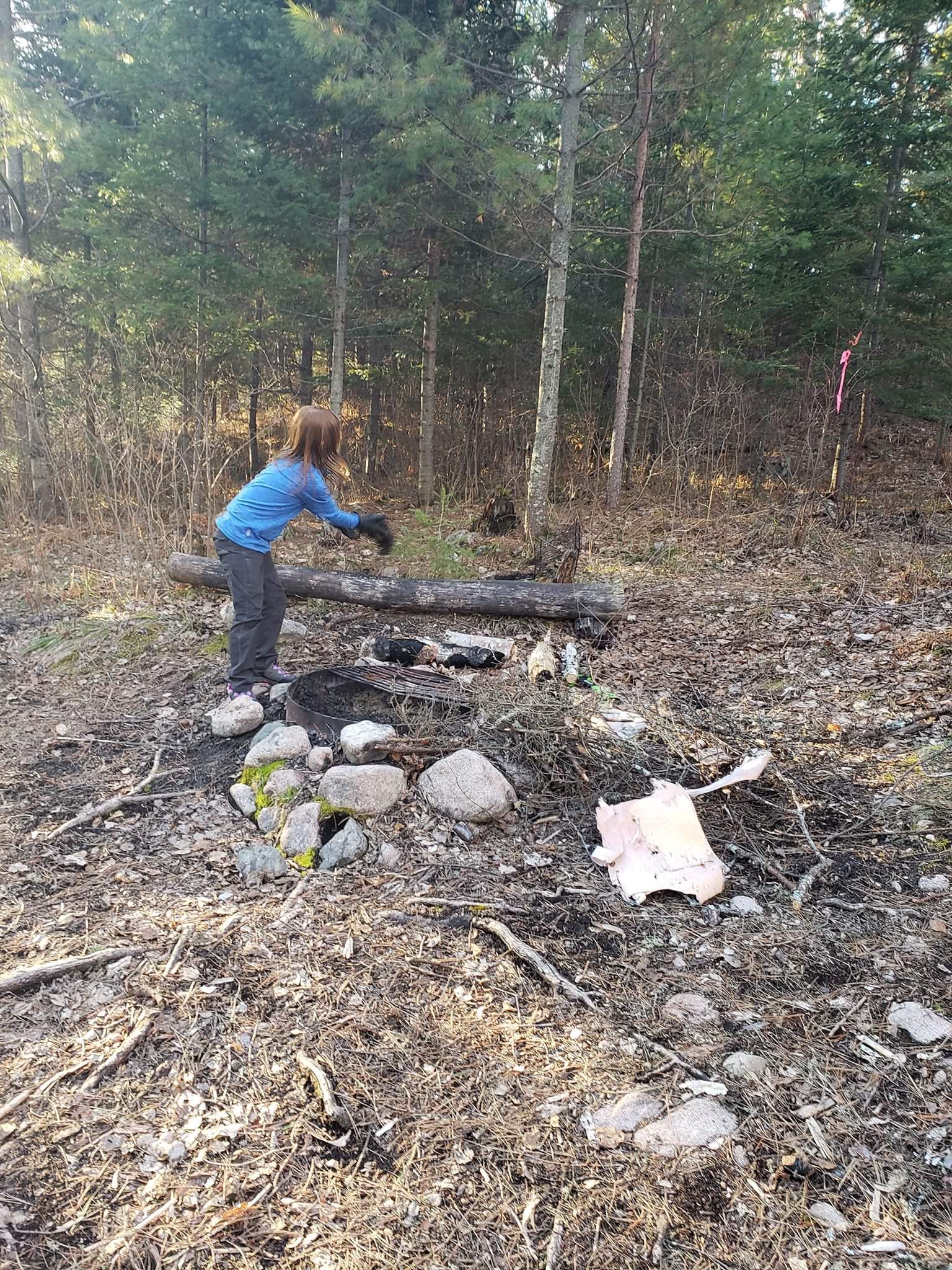 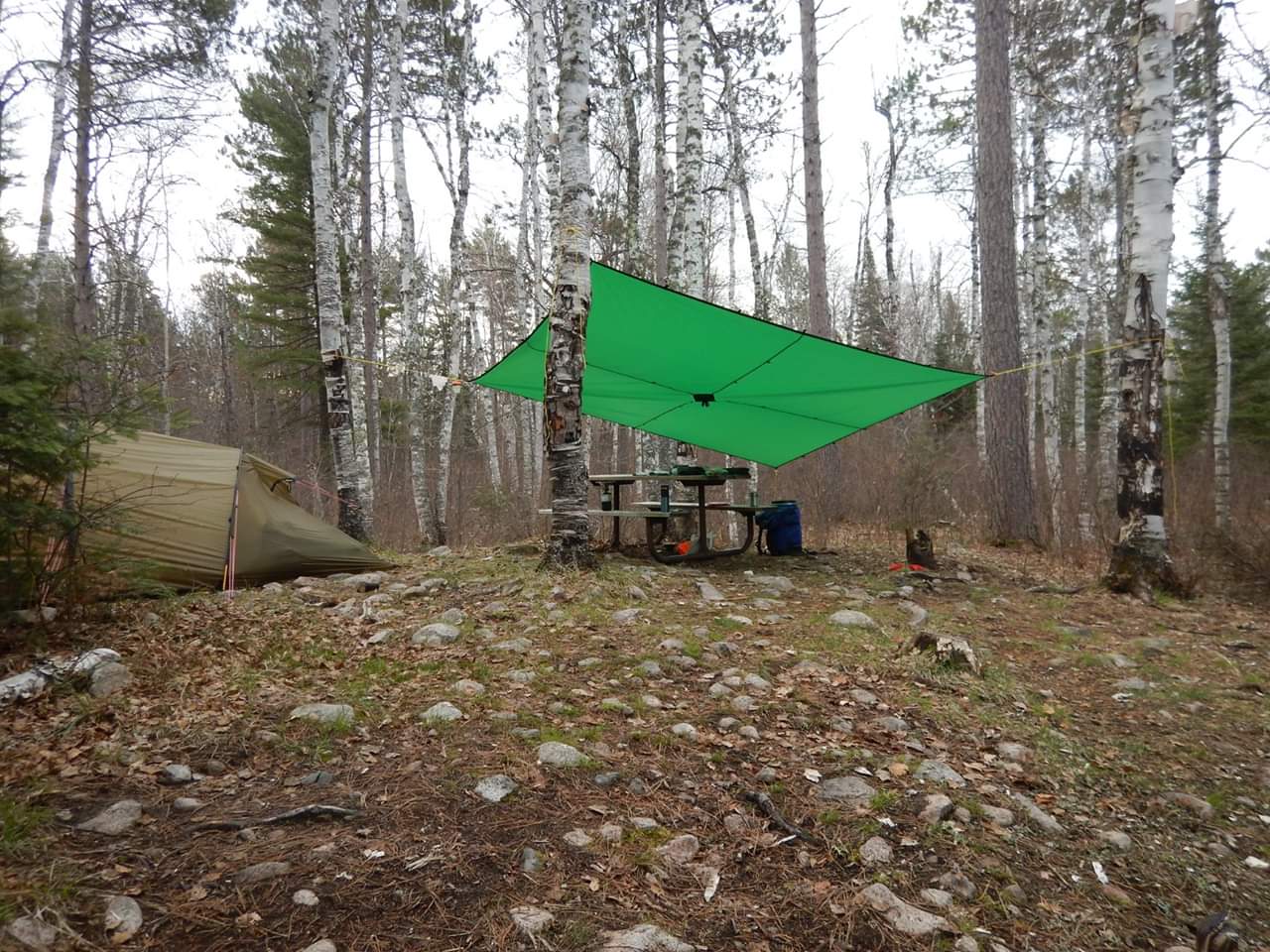 With camp set up, I processed some trees for firewood and Aurora helped stack it. By 840 we pulled up our chairs and enjoyed the fruits of our labor…..being in the woods. We both decided after about 45 min that we were ready to crawl into the tent and call it a day. It did not take long after being in the tent, away from the warmth of the fire to realize that the temps were a bit chilly, low 30’s. We both snuggled in and quickly fell asleep. A combination of a Black Bird “Cawing” and a full bladder had me up and out of the tent at 530am. My utmost favorite part of my past BWCA trips has always been waking up for the day. For two reasons….I’m alive and the serenity I am afforded with the quiet. The whole process of coming to take that first sip of coffee in the wilderness is, has been and always will be my favorite part of the trip. I’m forced to be patient and take in my environment....all of nature awakening for the day. The sounds, smells and visuals of life are one of the best things ever. Coffee in hand I make my way lakeside to sit and soak in the wonder of my surroundings. 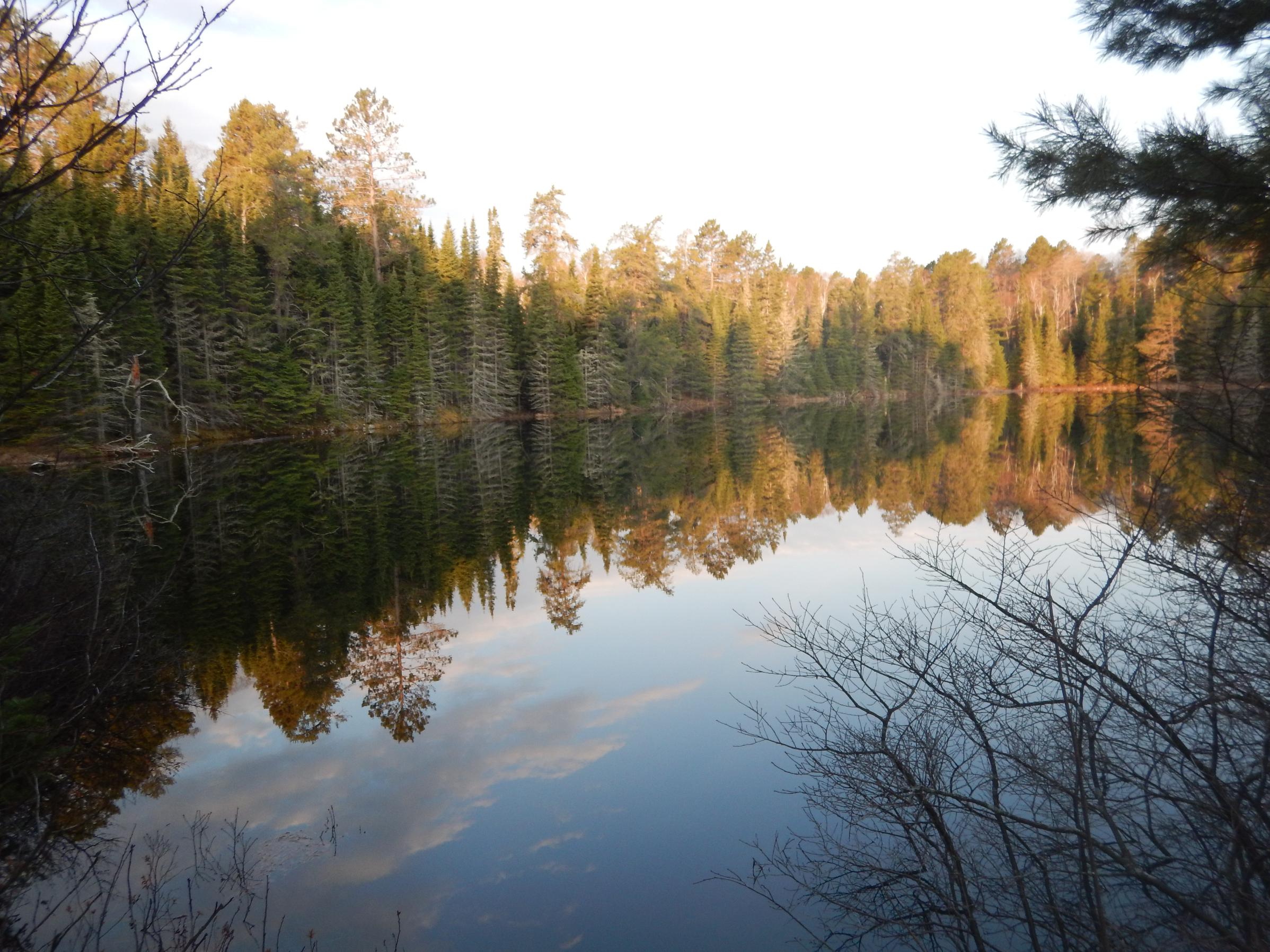 Three cups of coffee later I decide I need to start completing some camp chores. First on the agenda was to process more firewood so I could bake Aurora her Blueberry muffins. It’s now 830 am, wood is chopped, muffins are baked but Miss Aurora is s till snug as a bug in her bag. I have another cup of coffee and Aurora finally comes crawling out of the tent about 10 minutes later. While Aurora enjoyed her muffin we sat around the campfire and discussed our plans for the day. 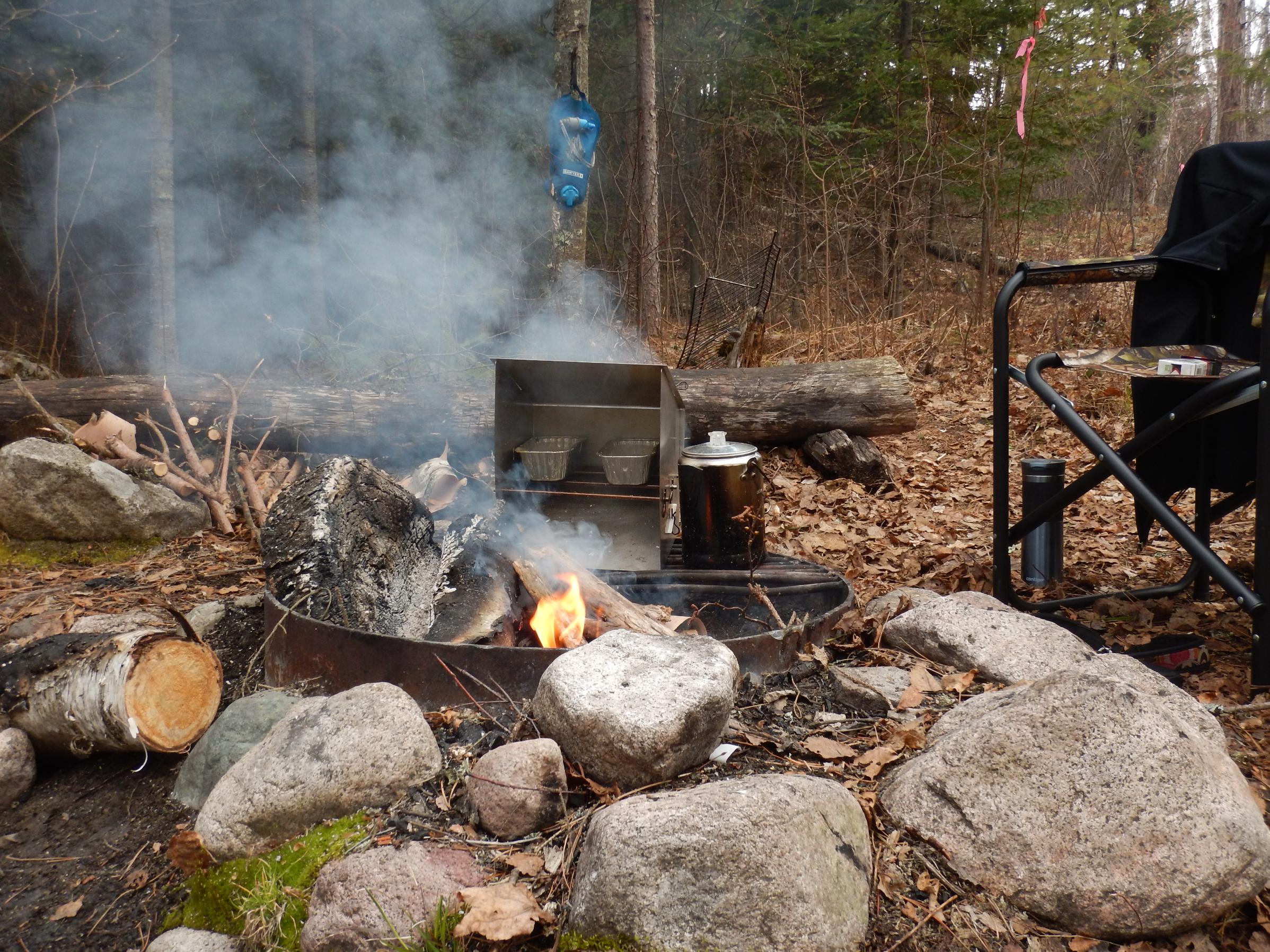 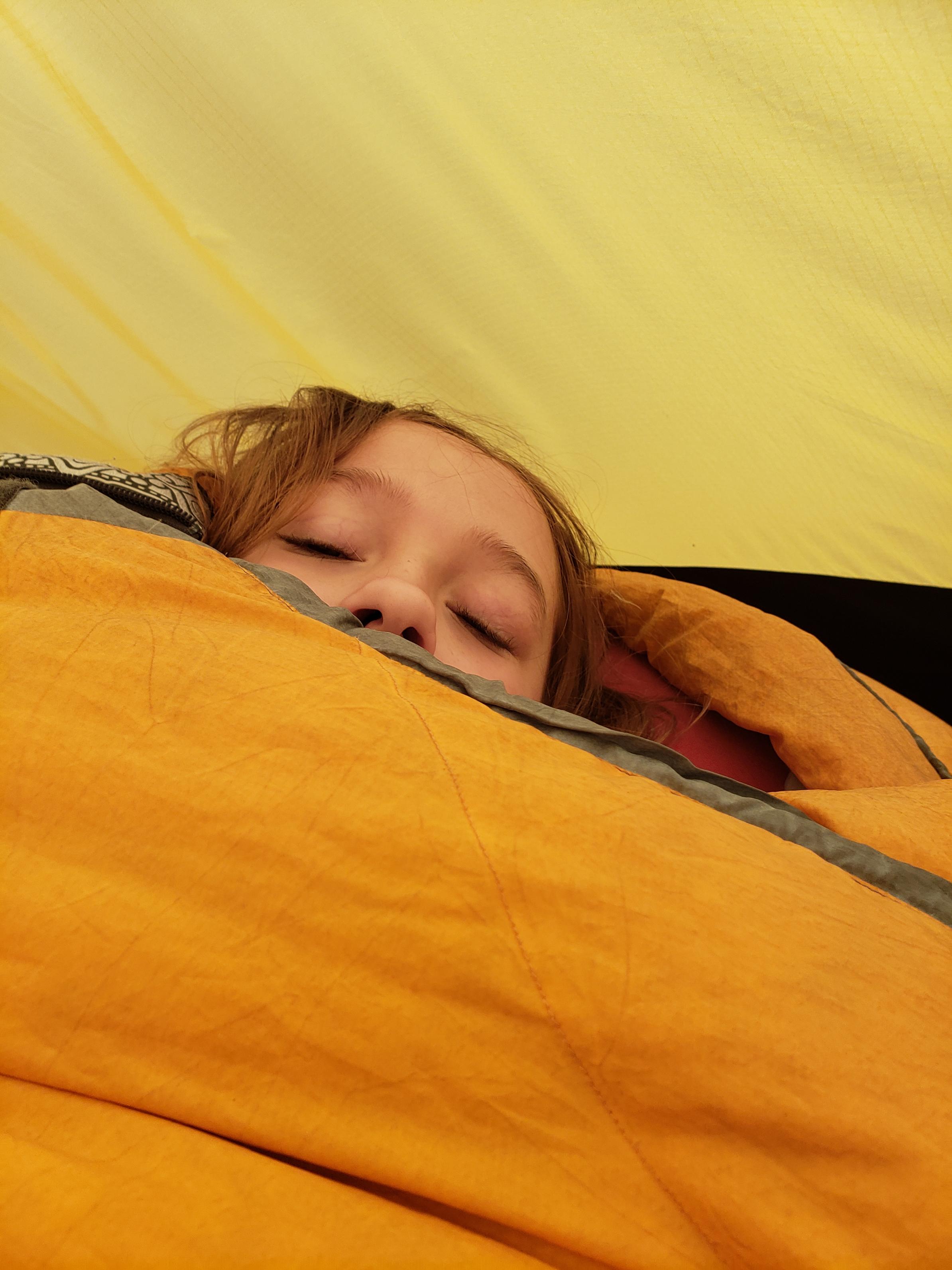 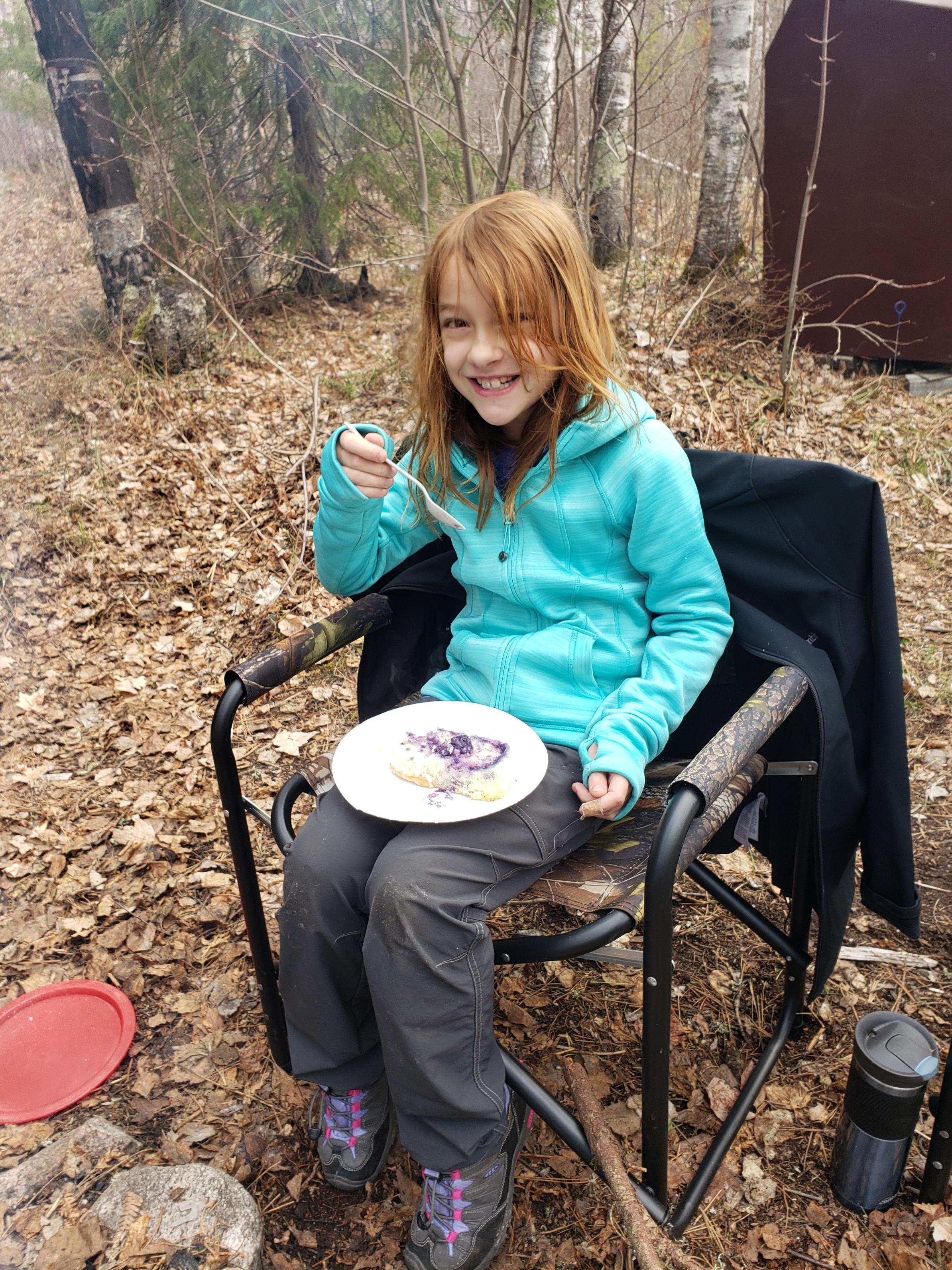 At 945 we were on the trail back to the car to drive to Norberg Lake (lake trout lake). Our goals for the day: Fish, Test my abilities to portage the canoe and test our abilities at paddling. Norberg Lake is a tiny little thing but that is exactly what I was looking for to assess our abilities in overcoming the next perceived hurdle in meeting our ultimate goal of BWCA camping trips. This would be the first time for me to portage the canoe and for her and I to paddle together. The trail that runs by the lake is literally a short walk in the park type trail. That’s ok, I will take that for my first attempt at portaging the canoe. 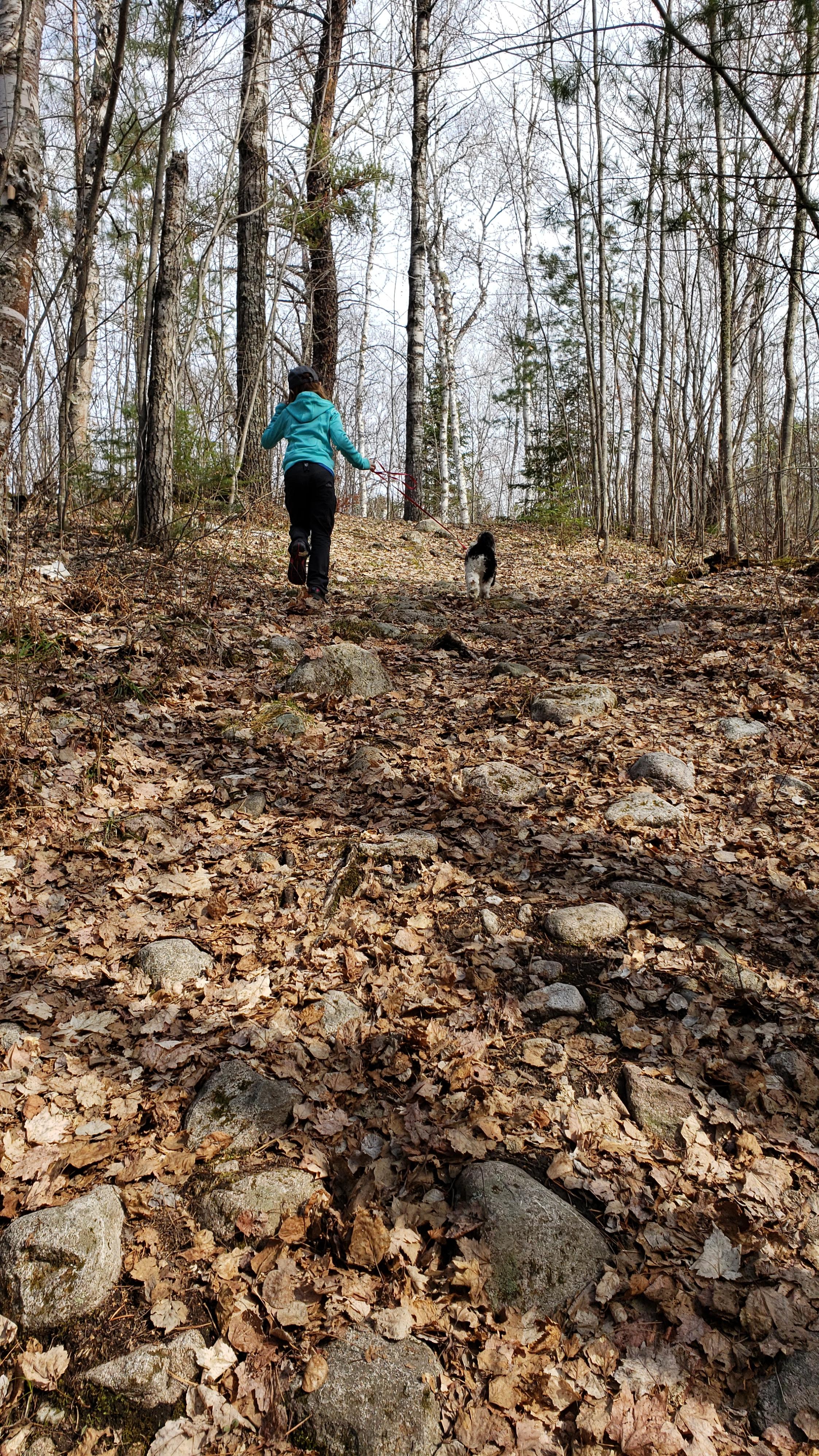 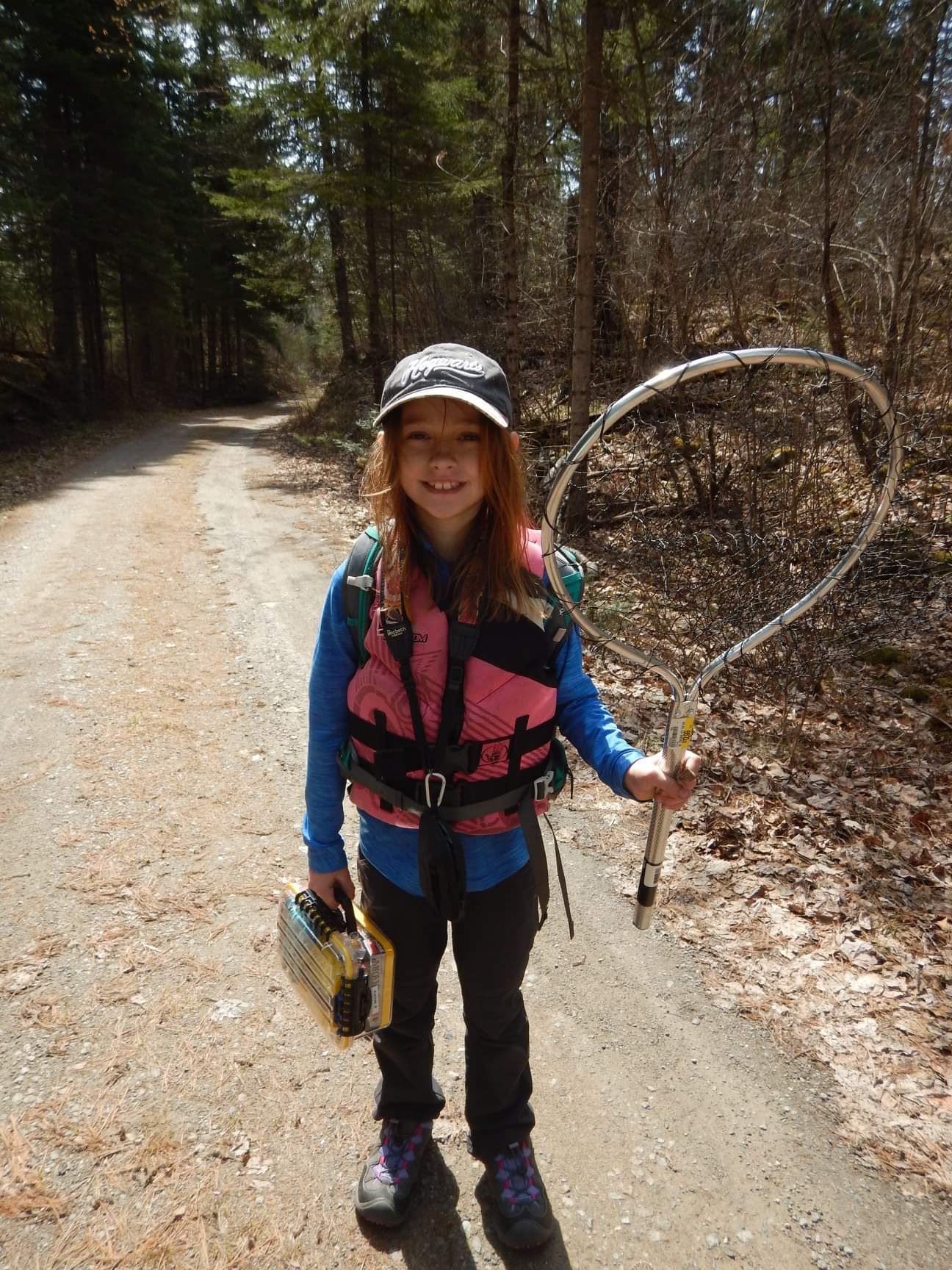 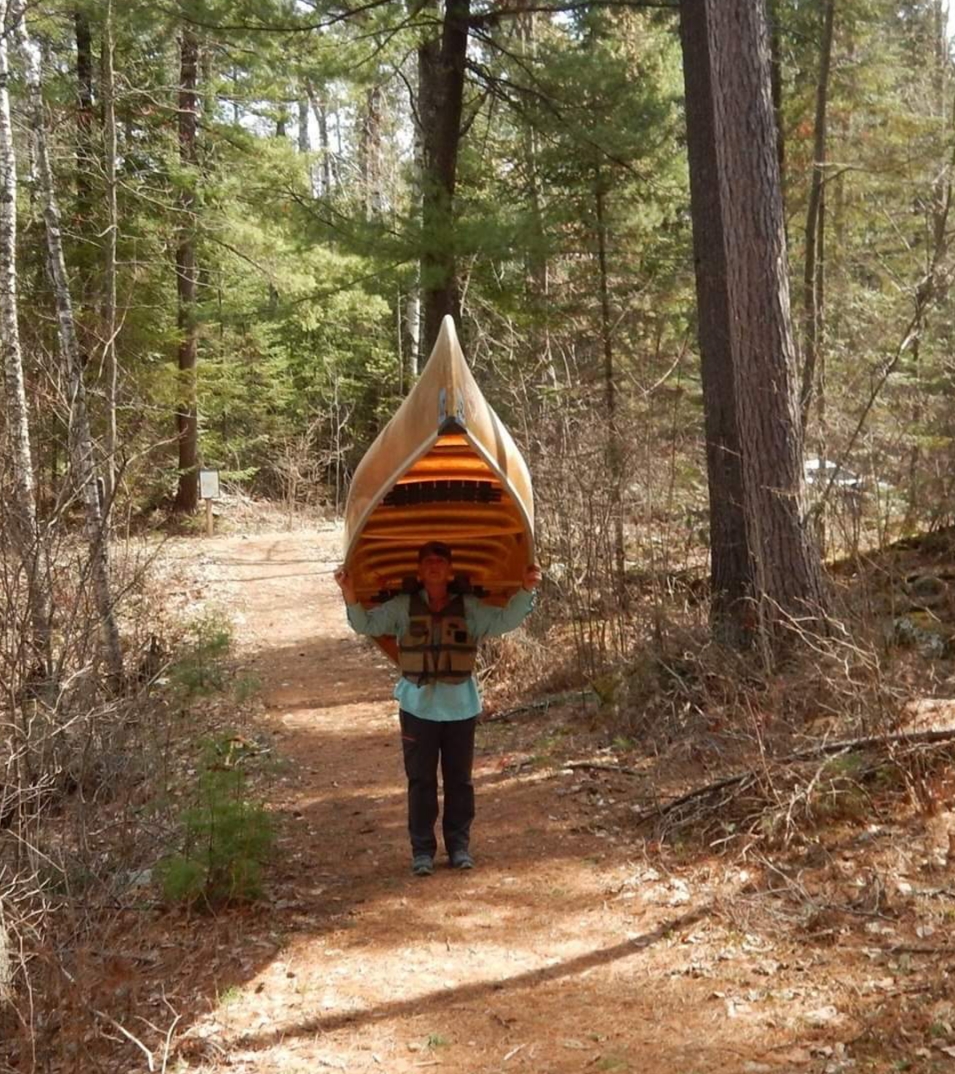 When the lake comes into site it is down the hill. I set the canoe down and scout out the best way down the hill to the lake. After getting the canoe down to the lake (no trail) and finding suitable shoreline to enter , we were paddling and fishing. Multiple times, during our outing, Aurora said “don’t paddle; I want to paddle all by myself. We were spinning in circles at her first attempts. Soon enough, with a little instruction, she no longer had us going in complete circles. 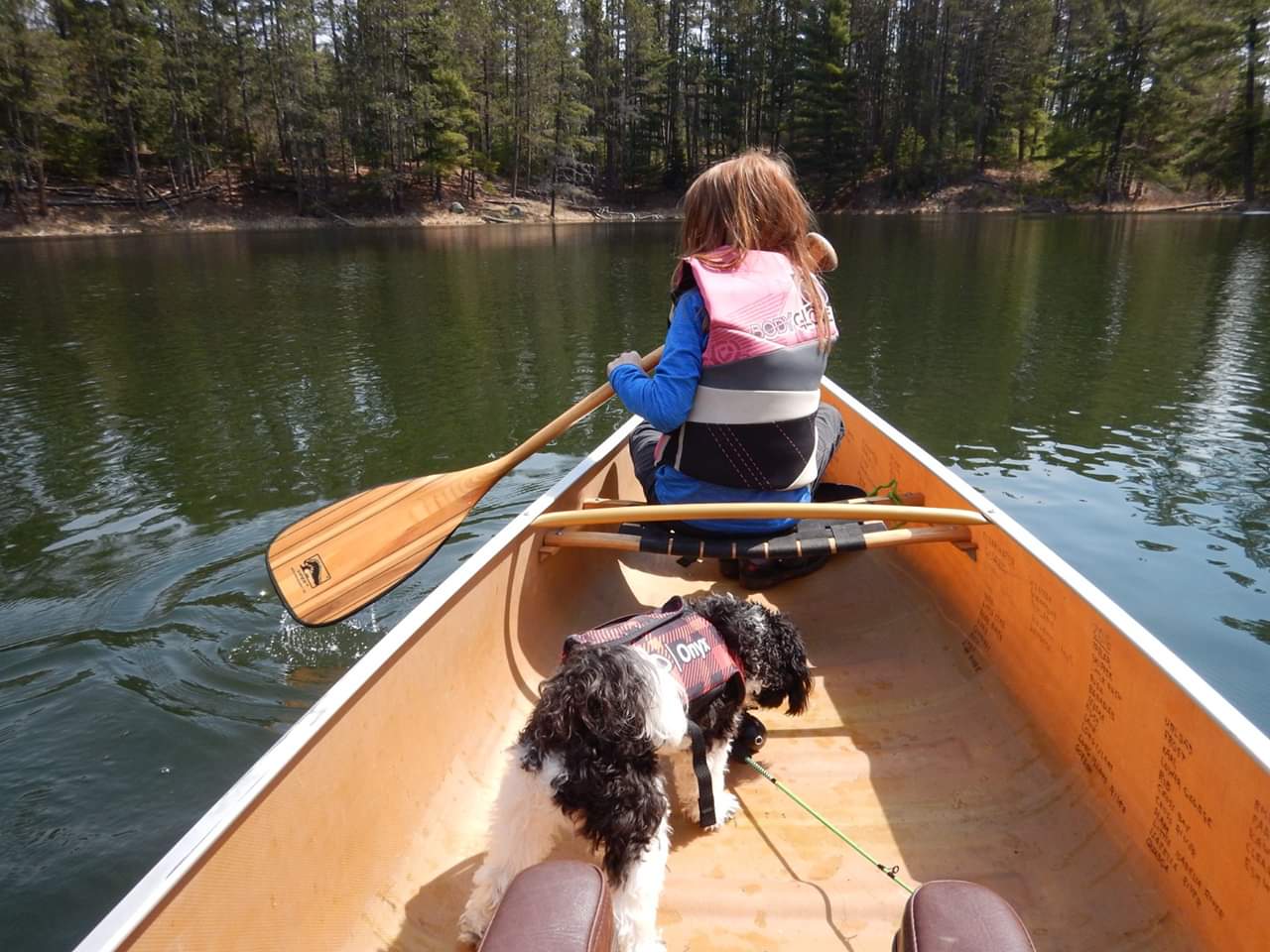 Upon exiting the lake, Aurora had her first experience with exiting a canoe in the water by herself. She learned and I learned that she was none too happy about getting her feet wet. After Aurora became adjusted to her wet feet I found myself standing at the water’s edge surveying the terrain laid out before me. My next task at hand was to get the canoe up the fairly steep hill that was littered with downed trees and underbrush. Believe me it was nothing close to bush whacking but definitely not a trail either. Fishing……Fishing for fish is not high or nowhere near the top of my list of to do’s while in the BWCA. If it were up to me I would not even bring a single pole with me. Every trip I have taken they have been an irritator for me during travels. Anyway, we did not catch any fish but what we did catch was another perceived obstacle overcome. With the canoe secured we made a quick stop at the park station to purchase some firewood. I had come to the conclusion this morning that the wood around camp was descent enough and served its purpose, but I wanted some better cuts for cooking Auroras requested dinner of Ribeyes, camp potatoes and peas over. With my Duluth Pack full of firewood, Aurora, I and Charlie head back over the trail that leads to our home in the woods for 1 more night. Overall the hike back to camp went well, only exception was that Charlie our pup started yelping ¾ of the way back. I stopped took of my pack full of wood and gave him a look over. I did not see or elicit any indicators of anything. I figured he must have gotten poked by a twig or something. Pack back on and we press on only for Charlie to start limping, I stopped again, took off my pack and re-inspected him. Now it appears he has a small bump and reddened skin on top of his back paw. I palpated it and felt it was probably some type of bug bite, as I did not feel anything broken and he had no reaction. I decided he was going to have to tuff it out and walk. He stopped limping but would rest. Back at camp I prepared a cold compress for him, wrapped it with coban and put him in his “Pup” tent to rest while Aurora and I played in camp. A few hours later Charlie came out of his pup tent and was keeping Aurora company while I set about preparing our supper meal. 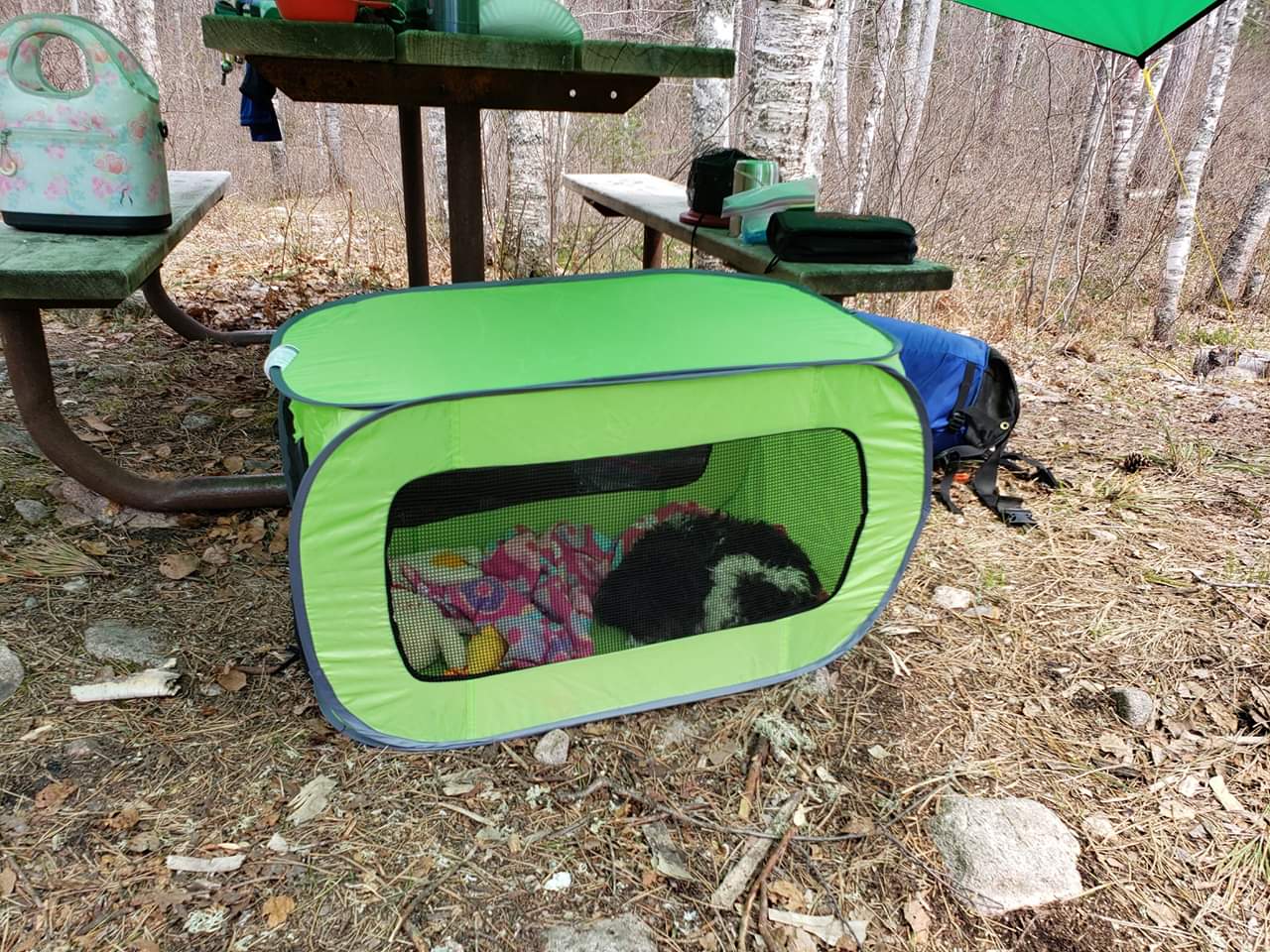 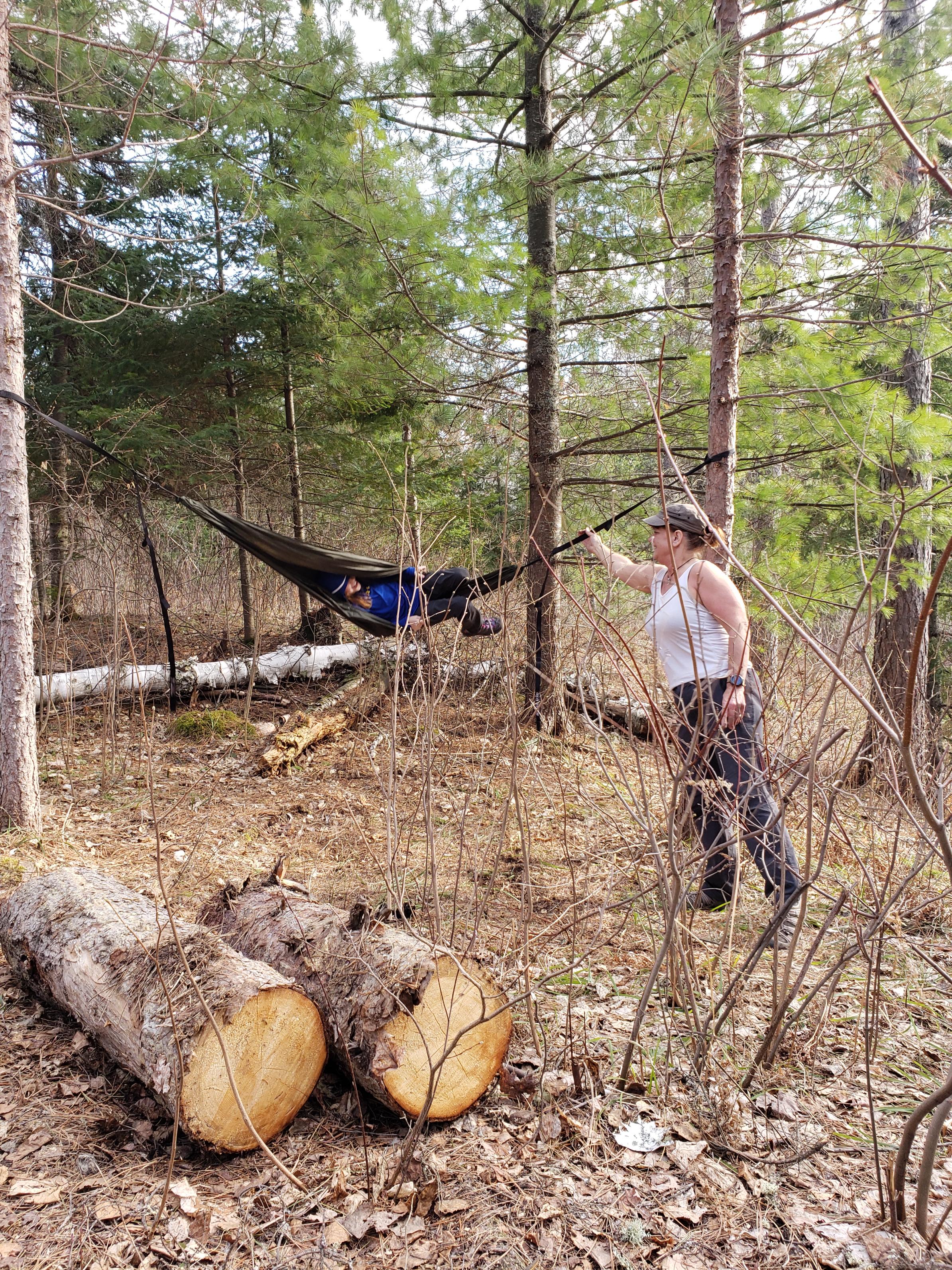 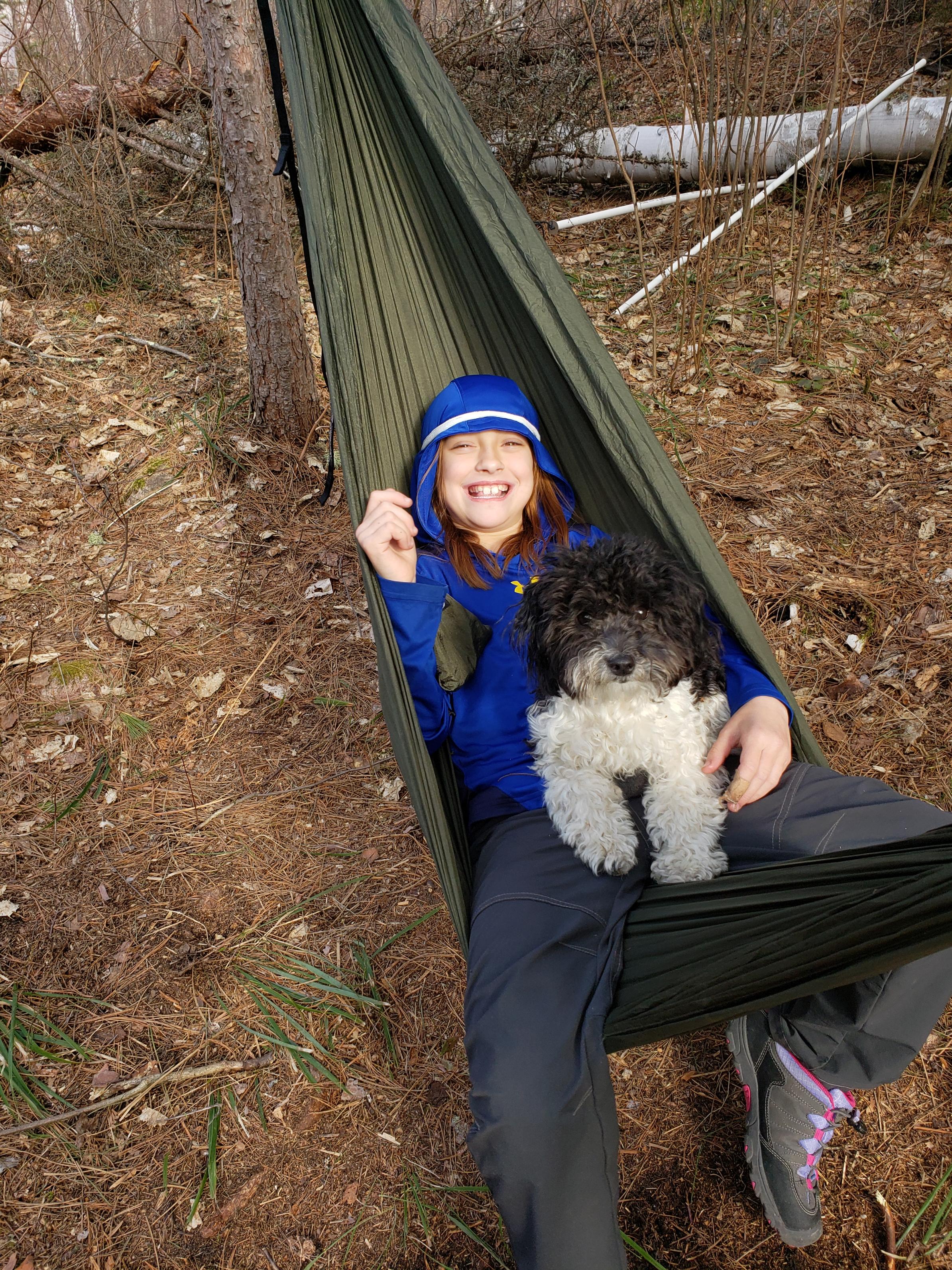 After supper we did some exploring around our camp site and then pulled our chairs up to a nice toasty fire. We called it a day around 845pm and crawled in the tent where we read stories and fell asleep with still a brightness left in the sky and feeling most grateful. I was up early the next morning and enjoyed my last wilderness morning coffee and soaked in my surroundings and all that has been learned. I set about getting some good coals going and started cooking the bacon. Now, for Aurora, waking to the smell of bacon when camping is her most favorite thing (memory). While the bacon is cooking, I begin to tear down what I can of camp and pre-pack some items when Aurora finally crawl out of the tent sometime after 830am and before 9am. We had breakfast of oatmeal & bacon, packed up the remaining camp items and hit the trail back to our car. 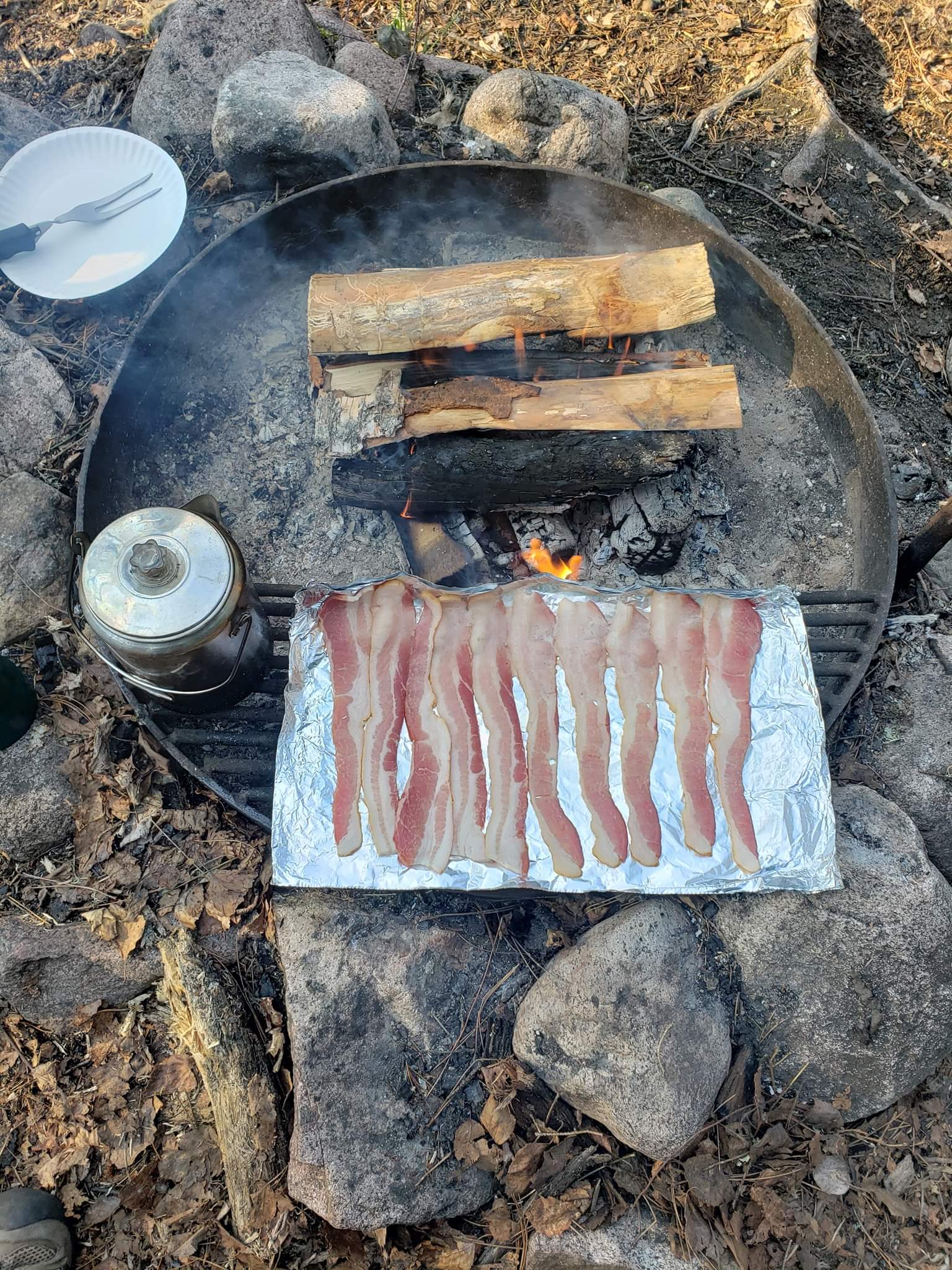 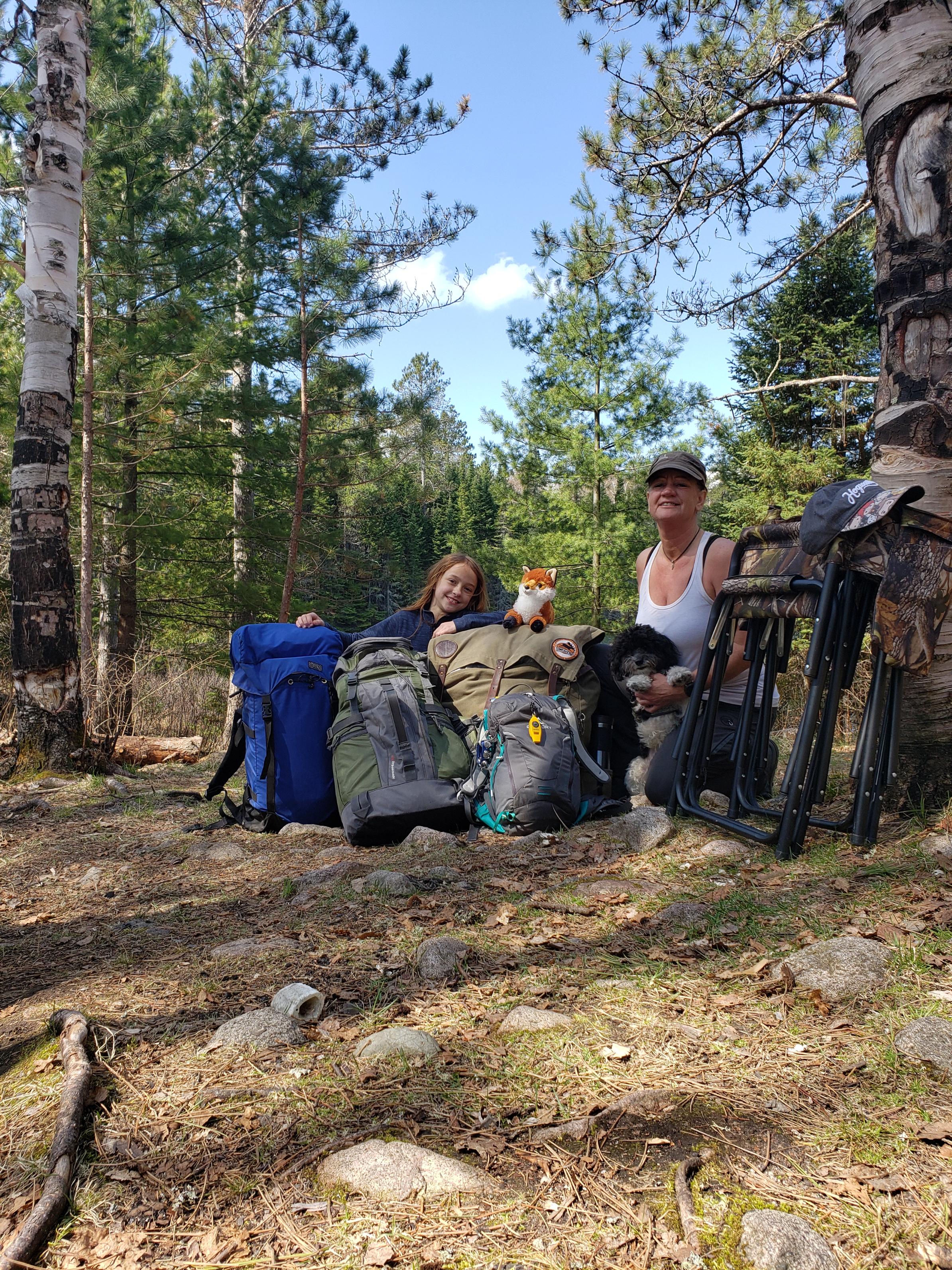 The hike out Charlie’s foot was healed..no more limping or swollen area. Aurora voiced complaints of the hike……I tempered it with myself in that I know how I feel when something good comes to an end…I just want to be home. Although that feeling for me does not set in until I see the car reloaded with my gear. Even with Aurora voicing complaints about the hike out she was still a happy camper. Of course a little silliness was had during our rest breaks ;) 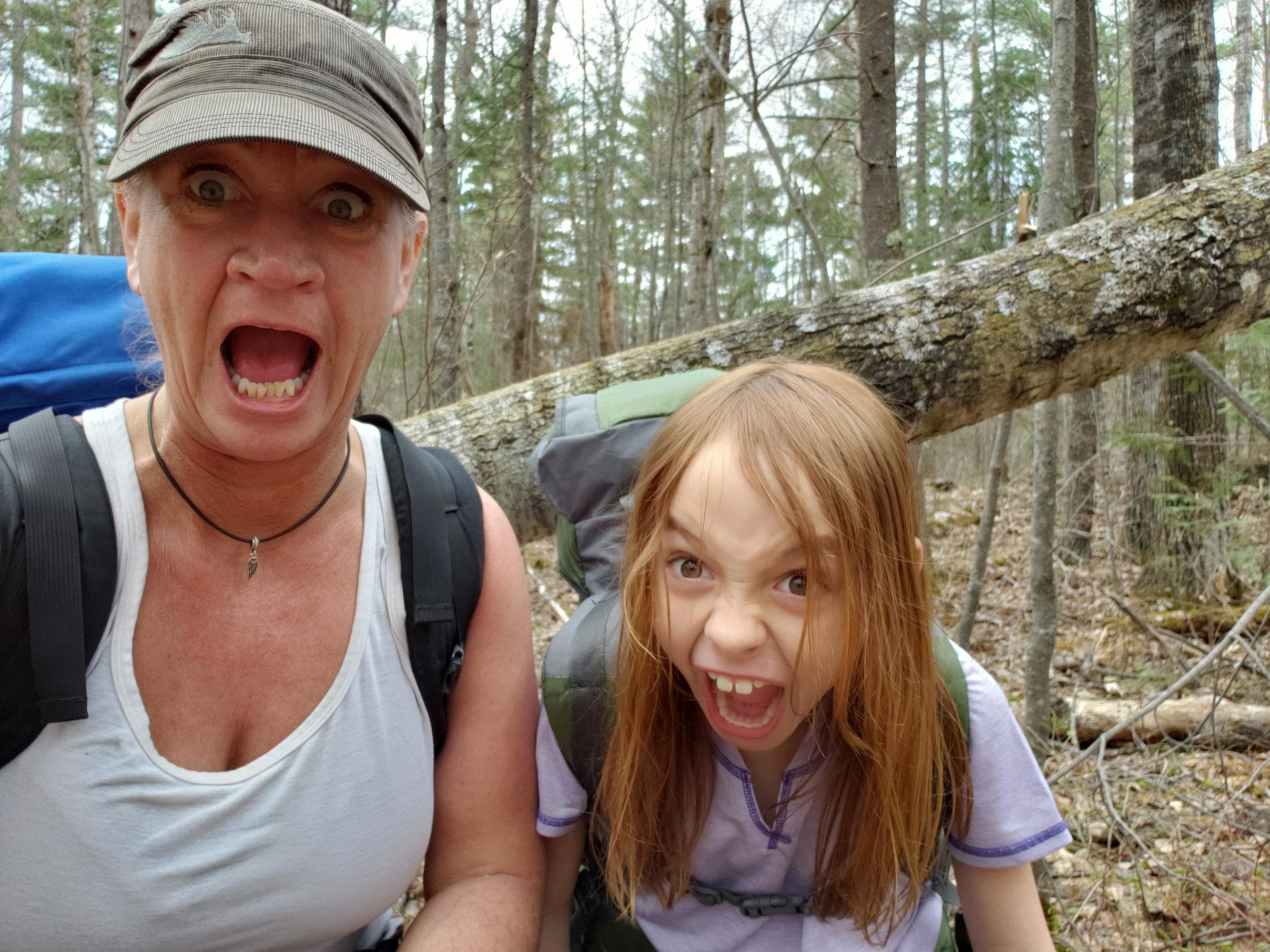 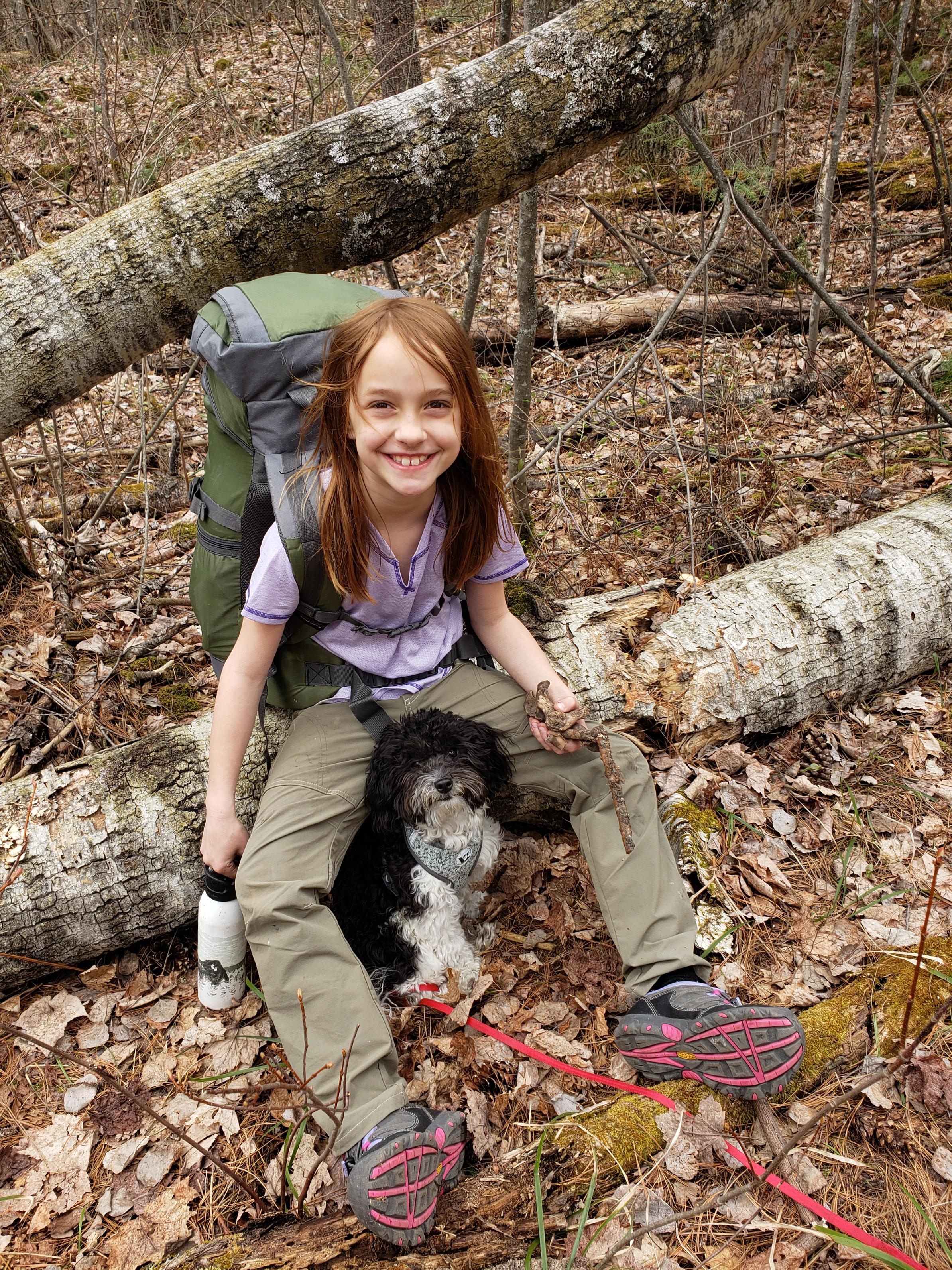 Learnings from this excursion: 1. Aurora can carry her gear although I would like to lighten it for her. Plan: On this trip I took my 30L barrel instead of the 60L for the fact I did not have a lot of food items with. On trips where we will be portaging our gear I will bring the 60L to add some of her items in it to decrease the weight out of her pack. 2. My new saw and hatchet worked great. 3. It took us approximately 1.25 hours to double portage the equivalent of a 224 rod portage. 4. It took me less than 45 min to get our tent and bedding unpacked and set up. 5. I can transport and portage the “Canoe” that is now known as the Overcomer 6. Aurora has the necessary safety and paddling knowledge of canoeing 7. Need to work more with Aurora on entry and exit via wet footing 8. Need a shorter canoe 9. Charlie needs boots 10. I need to practice and build my knot tying skills 11. I am blessed beyond measure