Agnes is a Lake Trout Machine
by pcallies

Trip Type: Paddling Canoe
Entry Date: 06/15/2019
Entry & Exit Point: Quetico
Number of Days: 8
Group Size: 4
Trip Introduction:
My father-in-law is 79. We started paddling together 21 years ago. While he's in phenomenal physical shape for a man his age, paddling trips have been getting more difficult the past few years. He just doesn't have the leg strength to catch himself if he stumbles and he doesn't have the stamina for multiple days of 5 hours of travel. This trip was an opportunity to relive a prior trip to Agnes and Kawnipi one last time. It was also an opportunity for my 16-year old nephew to experience the Quetico for the first time.
Discuss Trip: View Discussion Thread (3 messages)
Day 1 of 8
Saturday, June 15, 2019 We spent the night before the trip in one of the four-person bunk houses and LaTourell's Moose Lake Outfitters outside of Ely. The bunkhouse was basic, but pillows were provided and we felt it was a good value at $20/person.

We left the dock for the tow up Moose Lake to Prairie Portage at 7:15. After crossing the portage and getting checked in at the ranger station, we started paddling at 8:20.

Our route to Agnes took us through Burke, Sunday, and Meadows. I chose this route so we could see the southern end of Agnes and Louisa Falls as we missed that on our prior trip. I chose the Burke -Sunday route because the portages are easier than the Bayley-Sunday portage.

We arrived at the end of Sunday at 11:30, almost exactly matching my expectations. Like an idiot, I portaged through someone's campsite from Burke to Sunday. If you haven't been there (I hadn't), there's a portage on one side of the creek and a campsite on the other side of the creek. My map wasn't clear on which side of the creek the portage was on or that the campsite is also right there.

The two portages from Sunday to Agnes via Meadows were in good shape, but the Meadows-Agnes portage was much more technically challenging because of the large number of rocks embedded in the portage trail. It felt like I rarely took a level step and my feet were sore that night and into the next day. We encountered a portage maintenance crew that was breaking rock to create gravel for the portage -- I can't even imagine doing that myself. We thanked them for their efforts and picked our footing along the portage.

We were a much slower portaging party than I had planned so we didn't get onto Agnes until 2:15 including time for a snack and to rig our lake trout gear. Our first preferred campsite was occupied so we ended up paddling about a third of the way up the lake before finding a satisfactory site at about 6:30 -- way too long a day. During that paddle, my wife and I latched onto 12 lake trout and my father-in-law and nephew caught 3.

The weather on this day was a harbinger of things to come with temps mid-upper 60's, a gentle hint of air movement from the NE, and light cirrus and cumulus clouds against a deep blue sky. 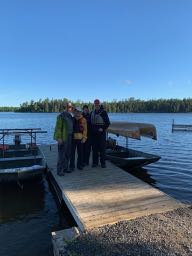