Canoeing in a Winter Wonderland
by TreeBear

Trip Type: Paddling Canoe
Entry Date: 10/12/2019
Entry Point: Bower Trout Lake (EP 43)
Exit Point: Ram Lake (EP 44)
Number of Days: 2
Group Size: 2
Trip Introduction:
We had been planning this trip for over a month as we found ourselves missing the BW more and more each day. Little did we know what kind of adventure lay ahead. As the planned weekend drew closer and closer, we watched the weather forecast go from bad to worse. Never ones to back away from a challenging trip, we drove up as planned. It was truly a magical adventure unlike anything either of us had seen before.
Discuss Trip: View Discussion Thread (13 messages)
Day 1 of 2
Saturday, October 12, 2019~Bower Trout Lake, Marshall Lake, Dugout Lake, Skidway Lake, Swan Lake, Vernon Lake, Brule Lake, Lily Lake, Mulligan Lake, Wanihigan Lake, Winchell Lake

The idea for this trip ended after the two of wrapped up this last guiding season. A fall canoe trip to the BWCA had always intrigued us, but we just never had gotten the time before. Our tripped was pushed back until the 12th of October, and little did we know what kind of adventure was in store!

We drove up from the cities on Friday night and slept in the back of the car. After 4 hours of sleep, we rolled out of bed around 5:30 to start our adventure. It had snowed overnight, and there was a light dusting across our canoe. 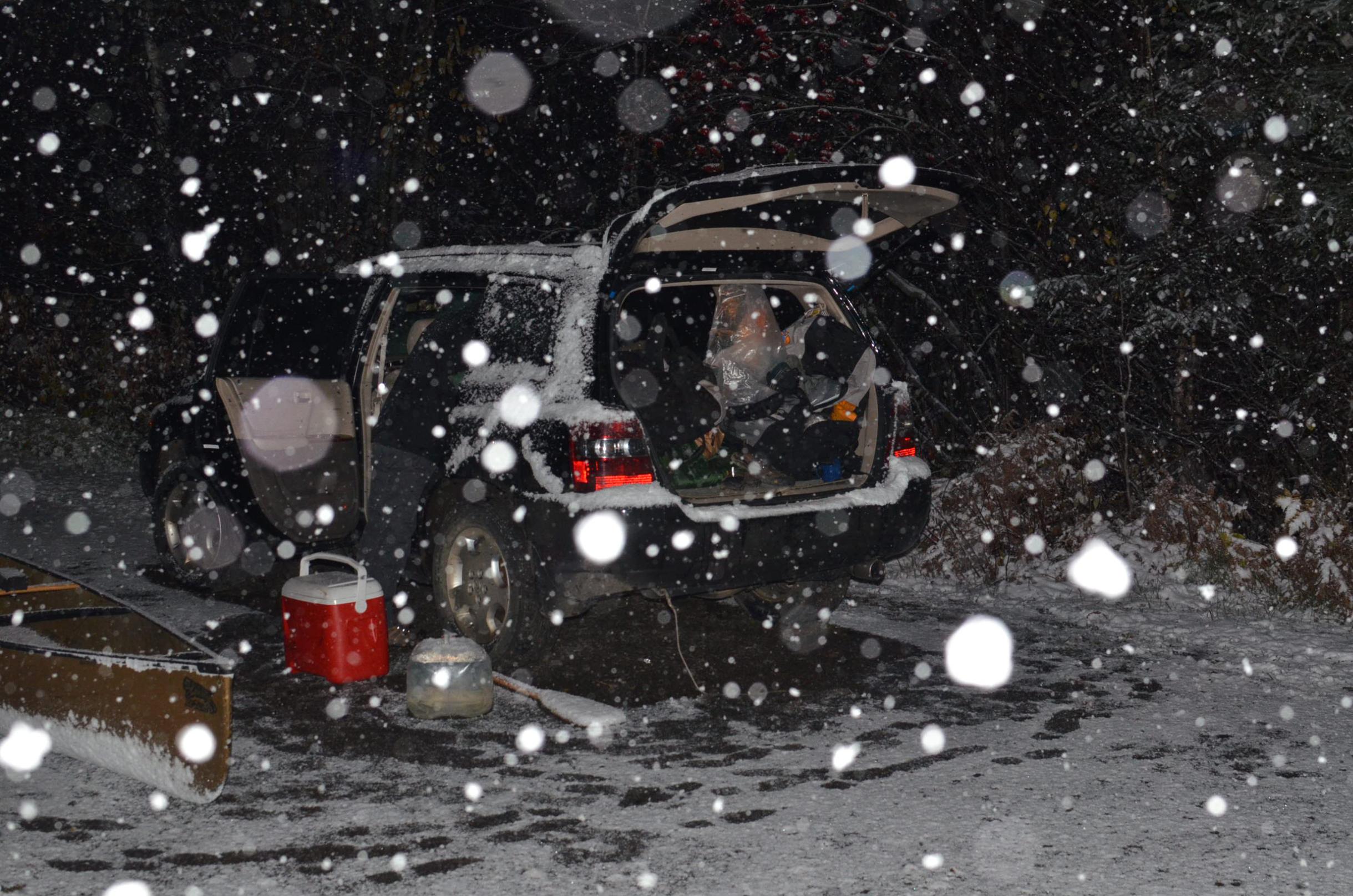 We unloaded our gear, packed our bags, and ate a quick breakfast. The forecast called for snow in the morning, and possible rain by afternoon, with 1-3" of snow accumulation throughout the day. We knew we didn't want to be out in freezing rain, so we were trying to make up mileage in the morning to avoid as much of that as possible. We started our portage into Bower Trout at about 7:30 am. As the sky begin to lighten with the sunrise, and the first large snowflakes were starting to fall, we began to grasp how incredible this trip could be. 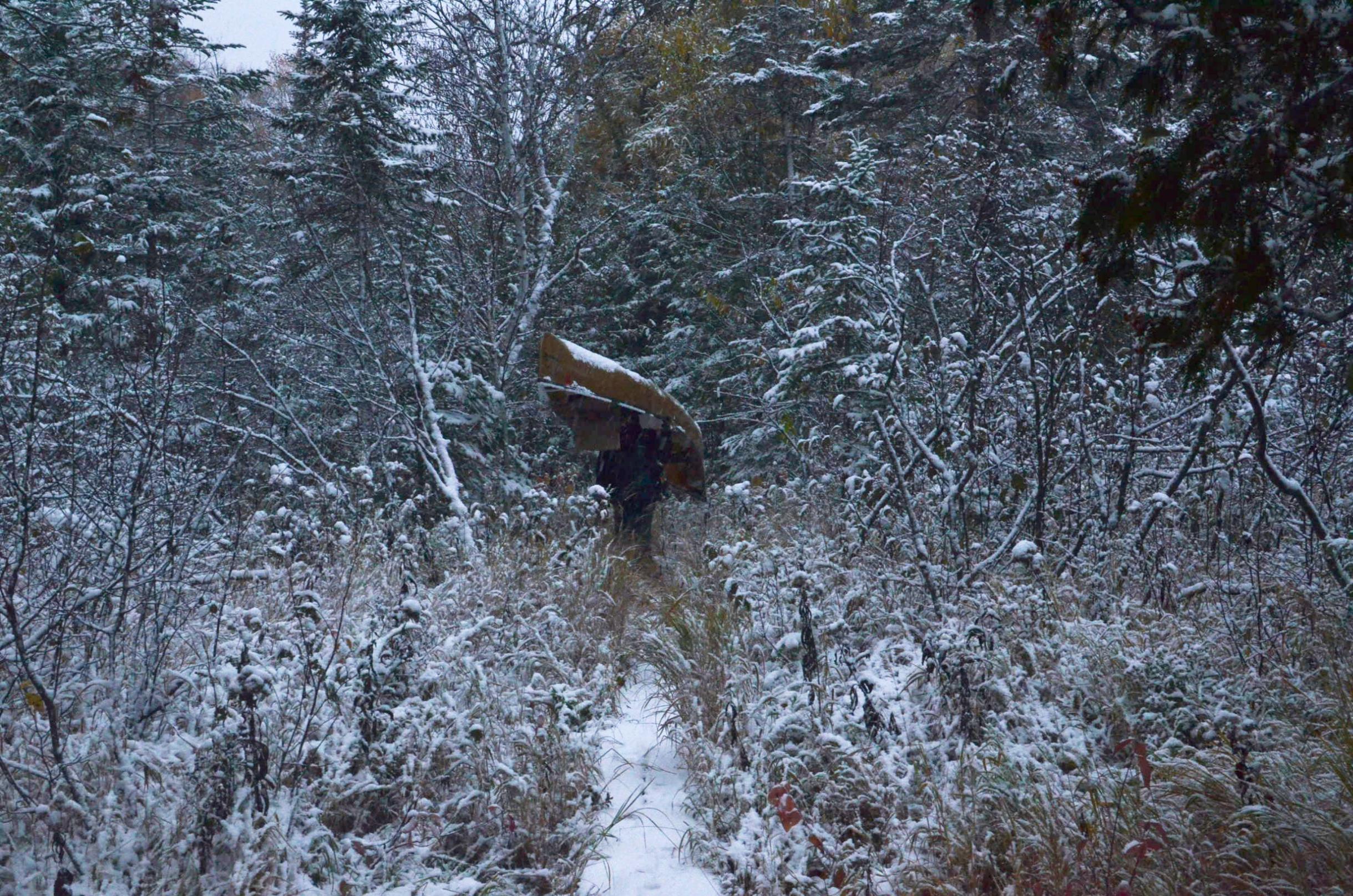 We paddled across Bower Trout and stared in amazement at the golden leaves that still clung to the Birch trees under the fresh blanket of snow. A large flock of ducks took off in front of us and flew to a different lake. Apparently they were not expecting visitors today. It was such a strange contrast of fall and winter at the same time. We reached our first portage into Marshall, making sure to plant our feet soundly on the boardwalk. A spill in this weather wouldn't be a very welcome surprise. We took one more look back at Bower Trout, before a nice portage walk to keep the blood flowing. 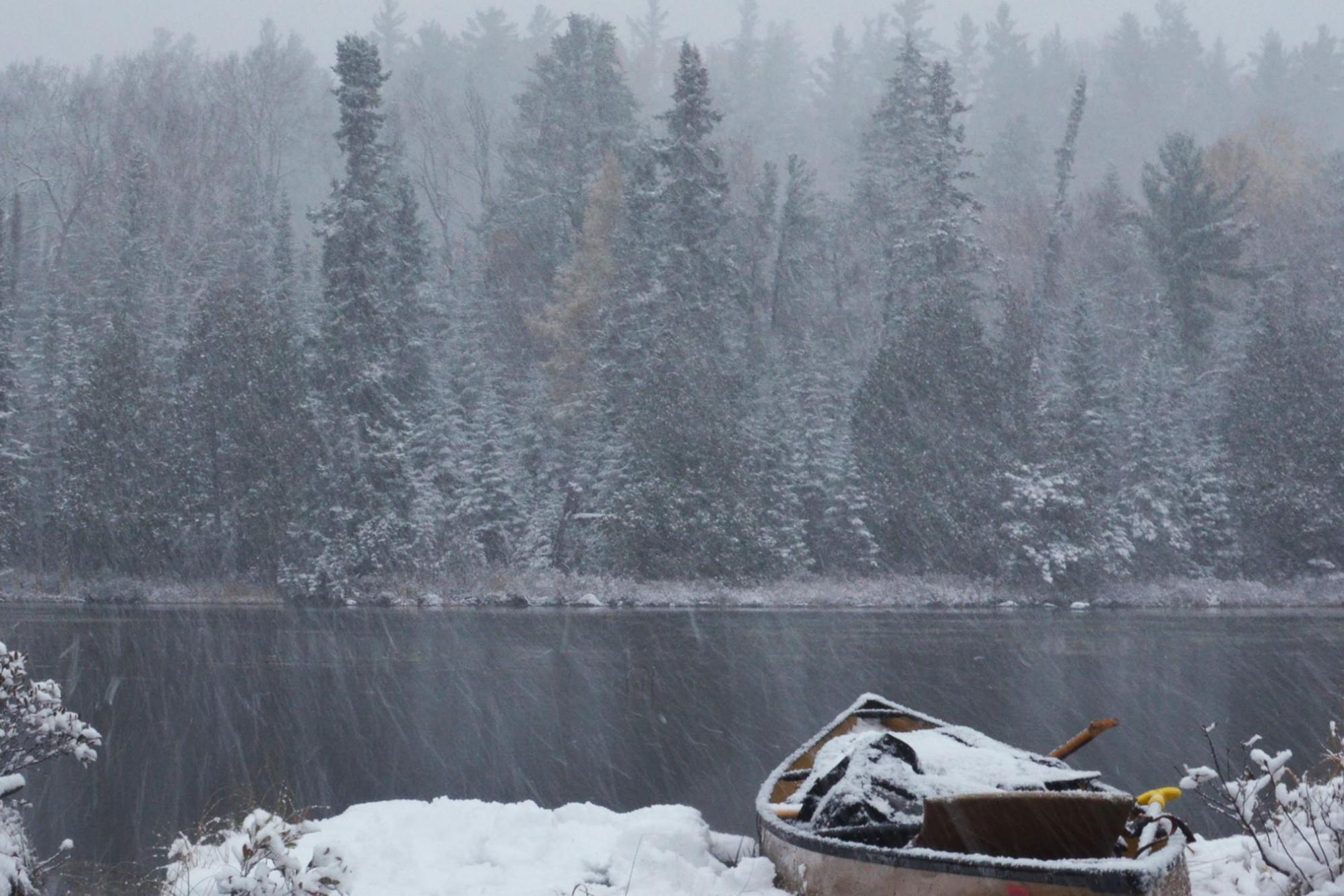 We reached Marshall by about 8:15 after slipping and sliding through the portage. There was an inch or two of snow on the ground at this point, and it was just getting started. By the time we got to Marshall, the large soft snowflakes turned into ice pellets: stinging our faces in the breeze that was just starting for the day. We made slow and steady progress through Marshall and Dugout, pulling into Skidway around 9:00. Right before the portage out of Skidway we encountered a large Bull Moose. He was standing in about chest deep water and had a huge, snow covered rack on his head. We watched each other for about five minutes before he lumbered off into the forest. Sadly, I didn't have more than a landscape lens along, so I couldn't get much in terms of pictures to document the magical experience. 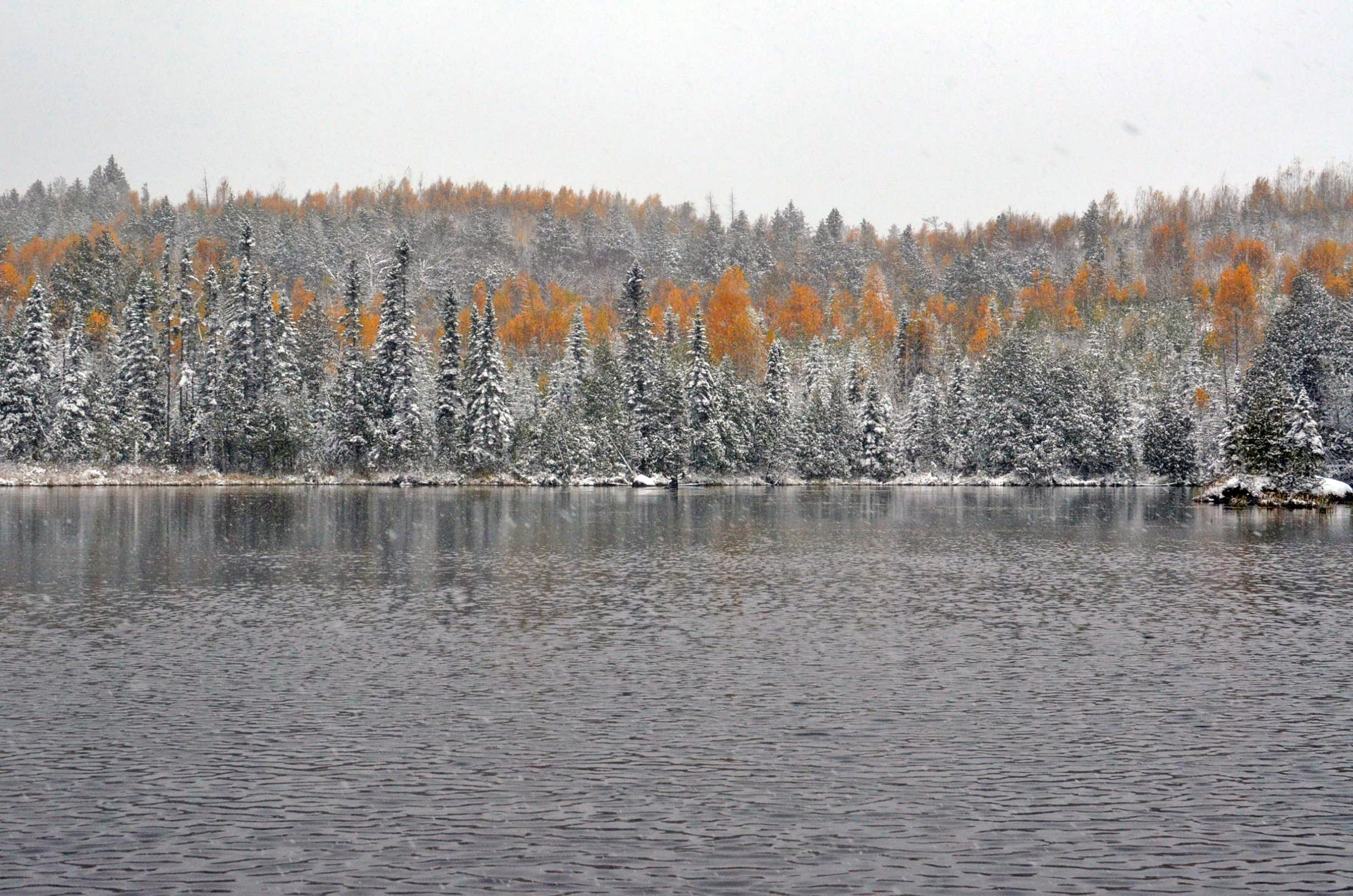 >
We continued struggling through the portages as the snow deepened, and footing became harder to find. Many of these portages on this stretch are rocky and a little overgrown, and the snow added a new level of hazard. We reached Swan by 10:16. The snow was getting stronger with a wind out of the South/South West. Little did we know that once we landed at the portage to Vernon, our toughest challenge of the day lay ahead of us. This portage is not marked with a distance on our McKenzie map, and so we were truly in the dark as to how challenging this portage would be. When we started the portage at about 10:40 there was approximately 5 inches of snow on the ground. I set off with the pack, the paddles, and my camera to hopefully blaze a trail for my buddy who was double packing a pack and our canoe. I scared a grouse up midway through and had to clear some down trees off the trail to provide clearance. This portage seemed to just keep going and going, with another inch of snow falling in the hour or so it took for us to cross. We were grateful though for the long walk as it helped warm our extremities which had begun going numb by this point. 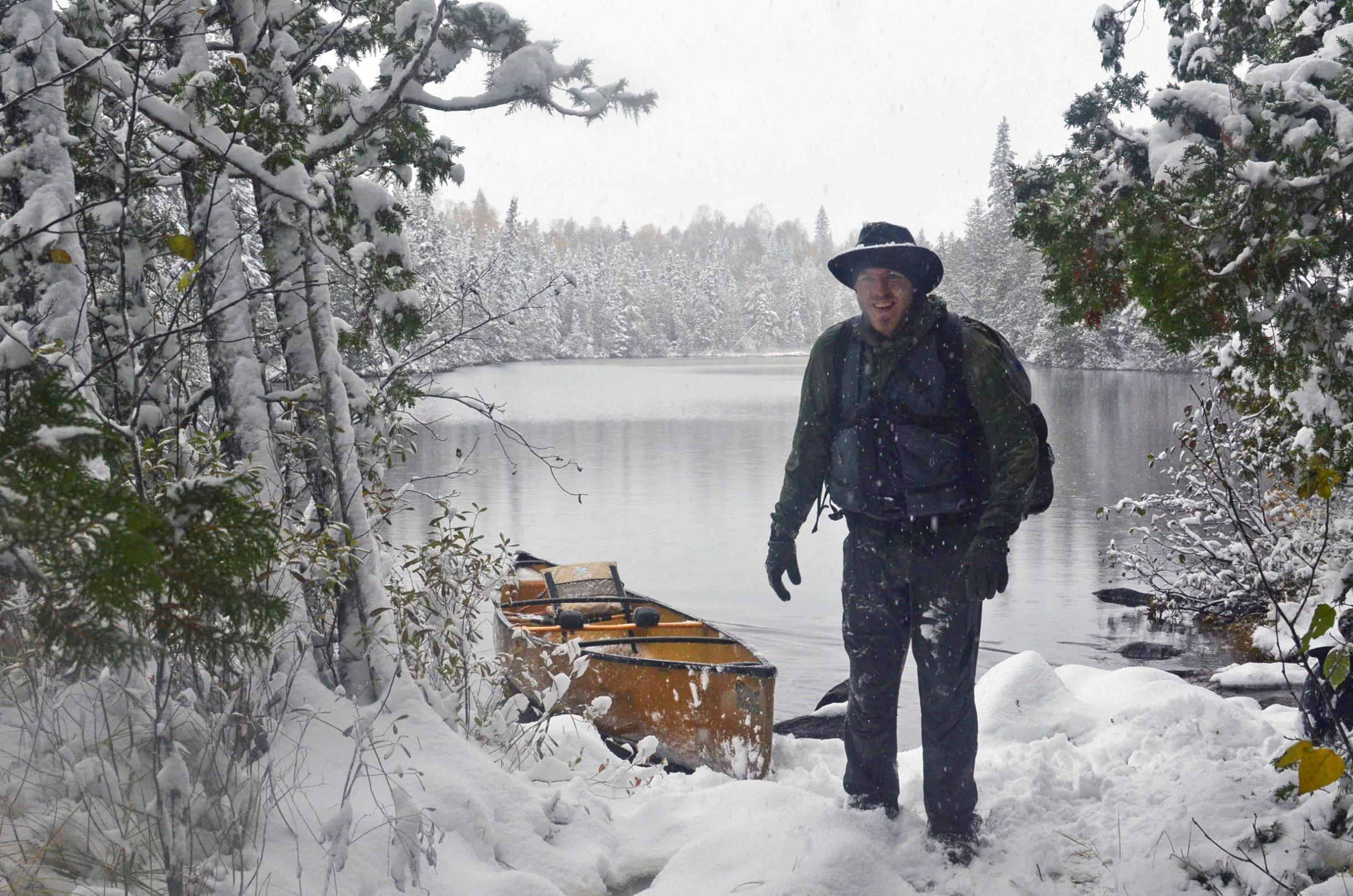 We reached Vernon by 11:30 and paddled across the lake to the campsite by the portage to make a lunch stop. The weather seemed to be changing every 20 minutes at this point, with all sorts of different kinds of snow hitting us with breaks in between. It didn't seem to be warming up though, which we deemed to be a good sign as we were really hoping for no rain. We ate lunch at the site, and enjoyed the sites and sounds of our winter wonderland. 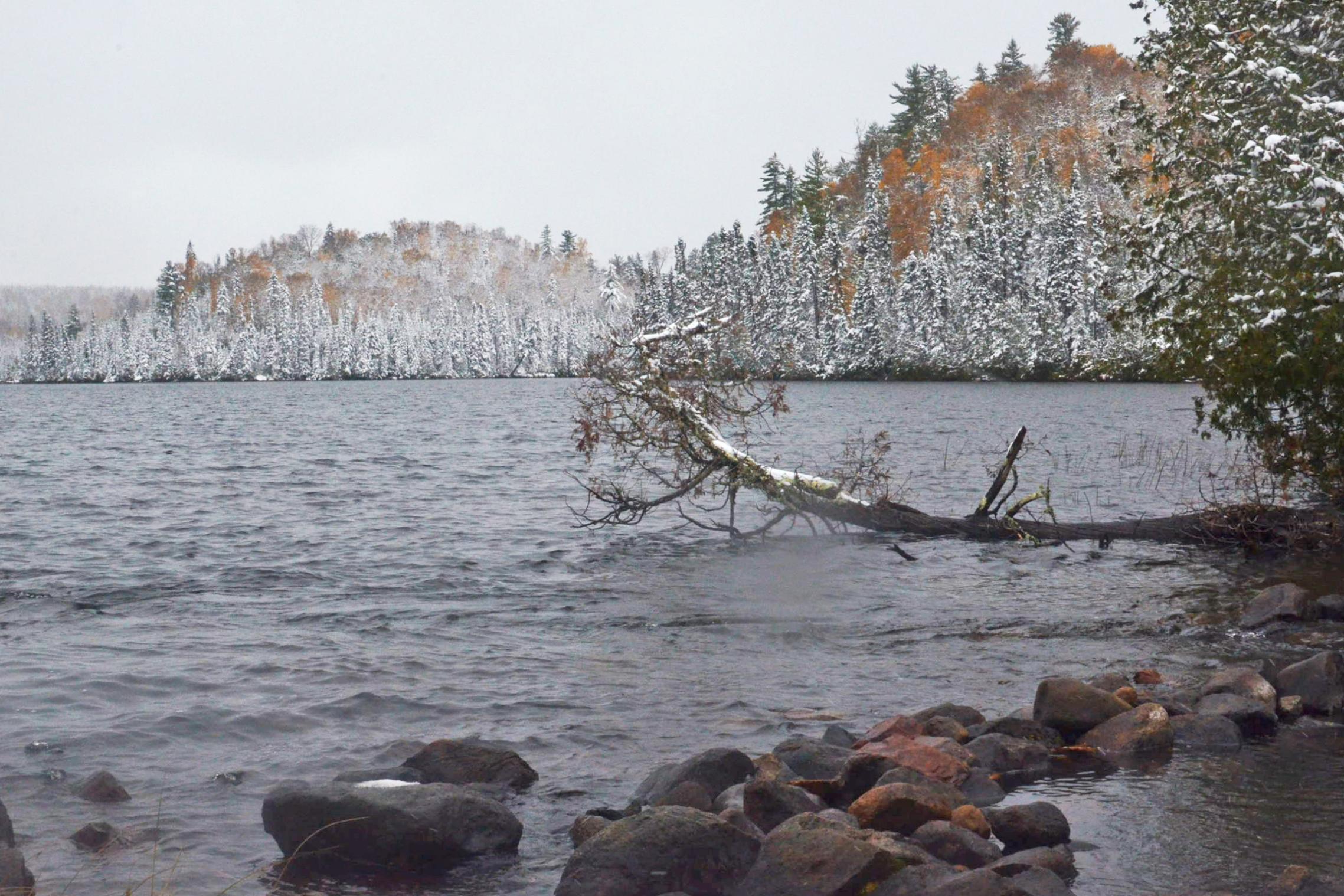 Our group took the steep portage out of Vernon into Brule. With the 6 inches of snow we had on the ground, the hills acted as ski slopes. I had the canoe and slipped and slid on more than one occasion! We reached Brule a little after 1 amidst small snowflakes blowing in an ever strengthening wind. We fought the SSW wind as we worked our way towards Lily. By the time we had reached Lily, I was struggling pretty bad with the cold (the wet clothes combined with the strong wind really drained my heat.) We took a snack break and I jogged the portage a few time to get the core working again. Lily and Mulligan passed without too much difficulty. By the time we reached Grassy, it was becoming tough to find the portages. We found the landing, but it was difficult to follow the trail for very long. In the end, the portage into Wanihigan ended up being a wet mess in the morning snow. We reached Winchell by about 4:30 in the afternoon and made a beeline for the site south of the Omega portage. When staring at the map, we predicted it would be the most sheltered from a SSW wind. The site looked great to us after a long, hard day. After briefly enjoying the view from our new front porch, we set up camp. We prepped ourselves a well deserved warm dinner and changed into dry clothes before buckling down for the night. Another day lay ahead. 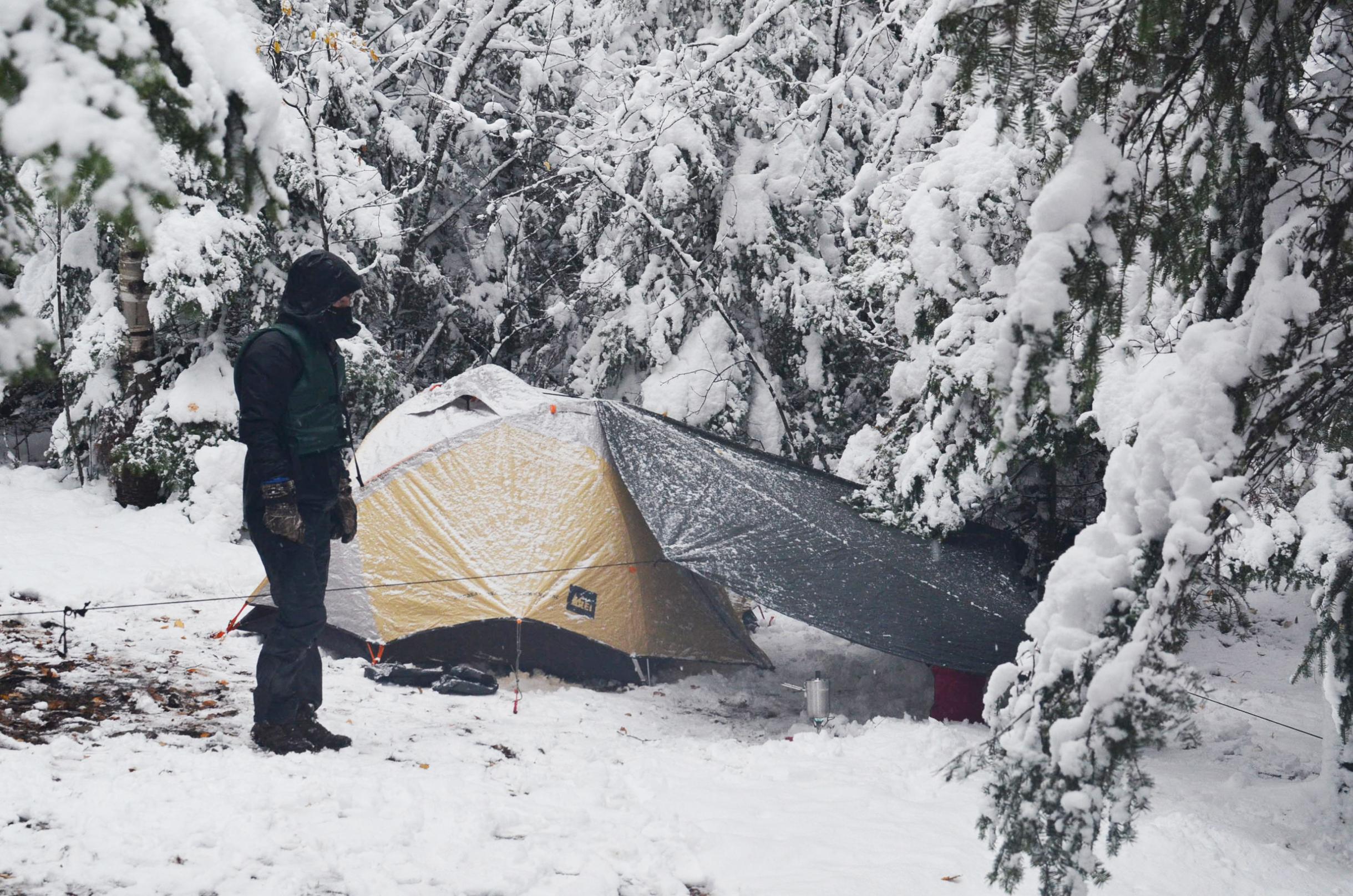