Much to my surprise and delight, Aurora is out of bed with little to no prodding and is displaying an uncharacteristic pleasant early morning demeanor as we are able to hit the road before 7:00 a.m. She naps most of the way, and I enjoy a quiet backroad drive to highway 61 and the North Shore of the big lake they call Gitche gumme.

We make a quick stop at Gene’s IGA in Grand Marais to pick up a few forgotten items and then walk across the road to Subway to grab a sandwich for brunch. Hungry Jack Outfitters is nestled at the end of a long narrow dirt road off county road 65 and we stop here to grab our permit and a hat for Aurora. Fortunately, Aurora aces the permit test and we are allowed to enter the wilderness without further delay. 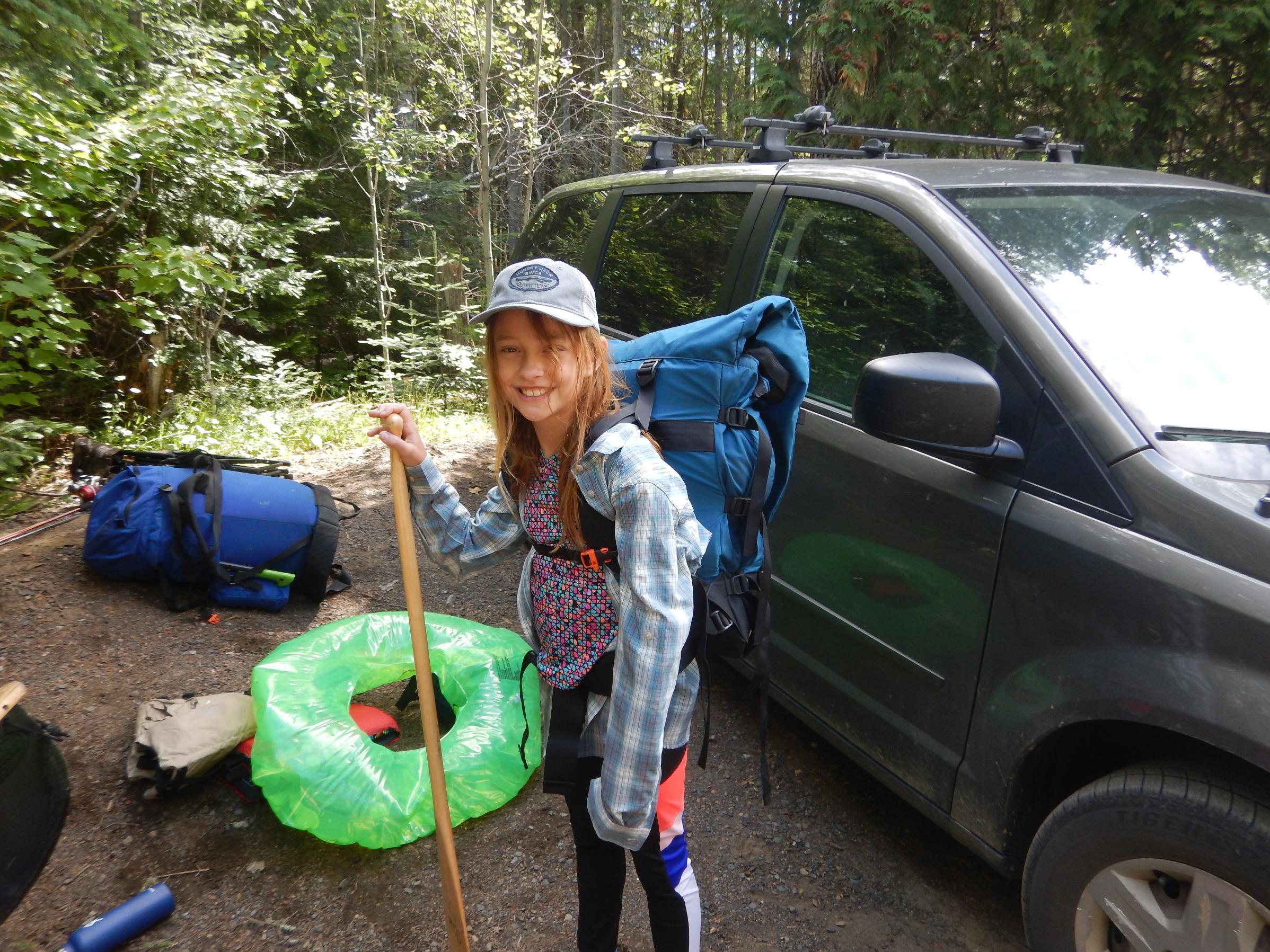 It’s late morning by the time we pull into the landing at the south end of West Bearskin Lake and, predictably, there is a lot of activity here. However, we get unloaded and on the water without encountering too much congestion or confusion.

It is a beautiful day and paddling conditions are optimal as we traverse to the Duncan Lake portage. There is a group unloading as we pull in, and after we exit our canoe we notice another group out on West Bearskin headed our way. I’m not a big fan of busy portages but, we are able to negotiate this one without bumping elbows or hindering anyone. Also, Aurora does a great job hauling her fully loaded new CCS youth adventurer pack across the trail without any complaint, and also eagerly pitches in grabbing a few of the smaller items on her return trip.

Upon putting in on Duncan, we turn west and begin looking for a vacant campsite. Aurora gets a little discouraged as the first 2 we pass by are occupied and we can see a couple more across the lake are as well. Approaching the narrow channel in the SW end of the lake, we soon discover the site at the entrance of the channel is also occupied. Aurora is now really growing concerned and I try to reassure her that there are a couple more sites on the lake we have yet to check.

Continuing up the narrowing channel, Aurora spots what she thinks is a fire grate just a short distance in front of us and off to the right. There is a mess of large boulders strewn about what appears to be a landing but, I am able to gingerly pull up and she excitedly hops out and scurries up the pine duffed rise. She exclaims, “It’s a campsite! And,there’s nobody here!” So, I pull the canoe up and take a look for myself. It certainly is campsite #658 and while Aurora is excitedly running around giving it full inspection and approval, I concur and begin hauling our packs up to the site proper.

I notice there is another landing closer to the kitchen area but, it looks more treacherous than the boulder field, so I decide to leave well enough alone and keep the Black Pearl at the first landing. The site itself is slightly elevated and offers a decent look back up the channel to the main body of the lake. There is a huge downed tree running along side the fire grate that appears to serve double duty, providing excellent seating and will work handily as a table as well. However, there isn’t a lot of room here and much of the site is quite lumpy. There only appears to be one semi-decent tent pad but, I suppose you could find a spot to squeeze in another. For just the 2 of us it will work just fine, and we unpack and start getting camp put up.

There is an ideal spot for our hammock near the tent and Aurora immediately grabs her book and retreats to the shady sanctuary while I finish getting the CCS tarp and the rest of camp up. It doesn’t sound like we’ll need the tarp much for rain but, we will certainly need it to provide some shaded relief. 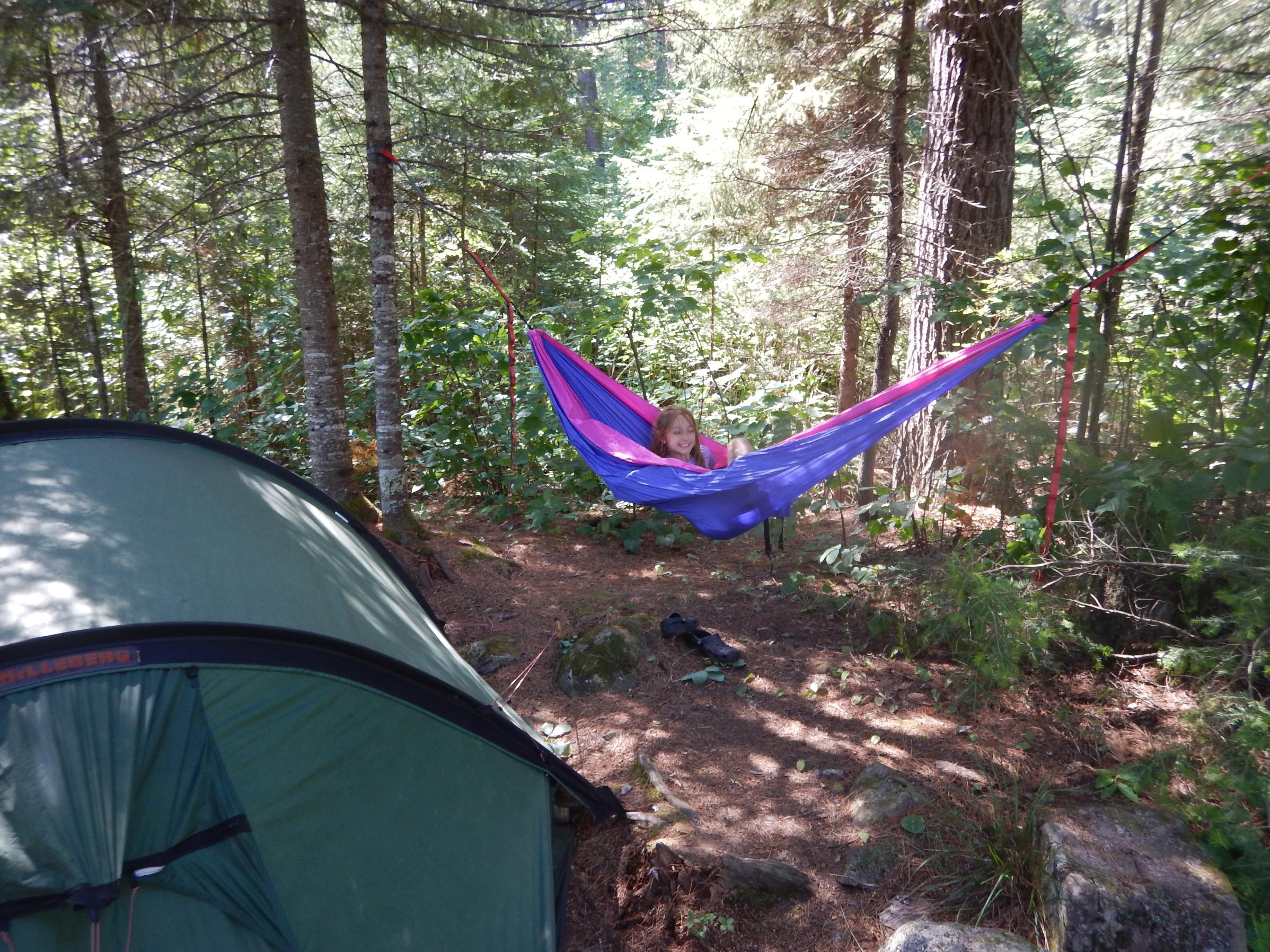 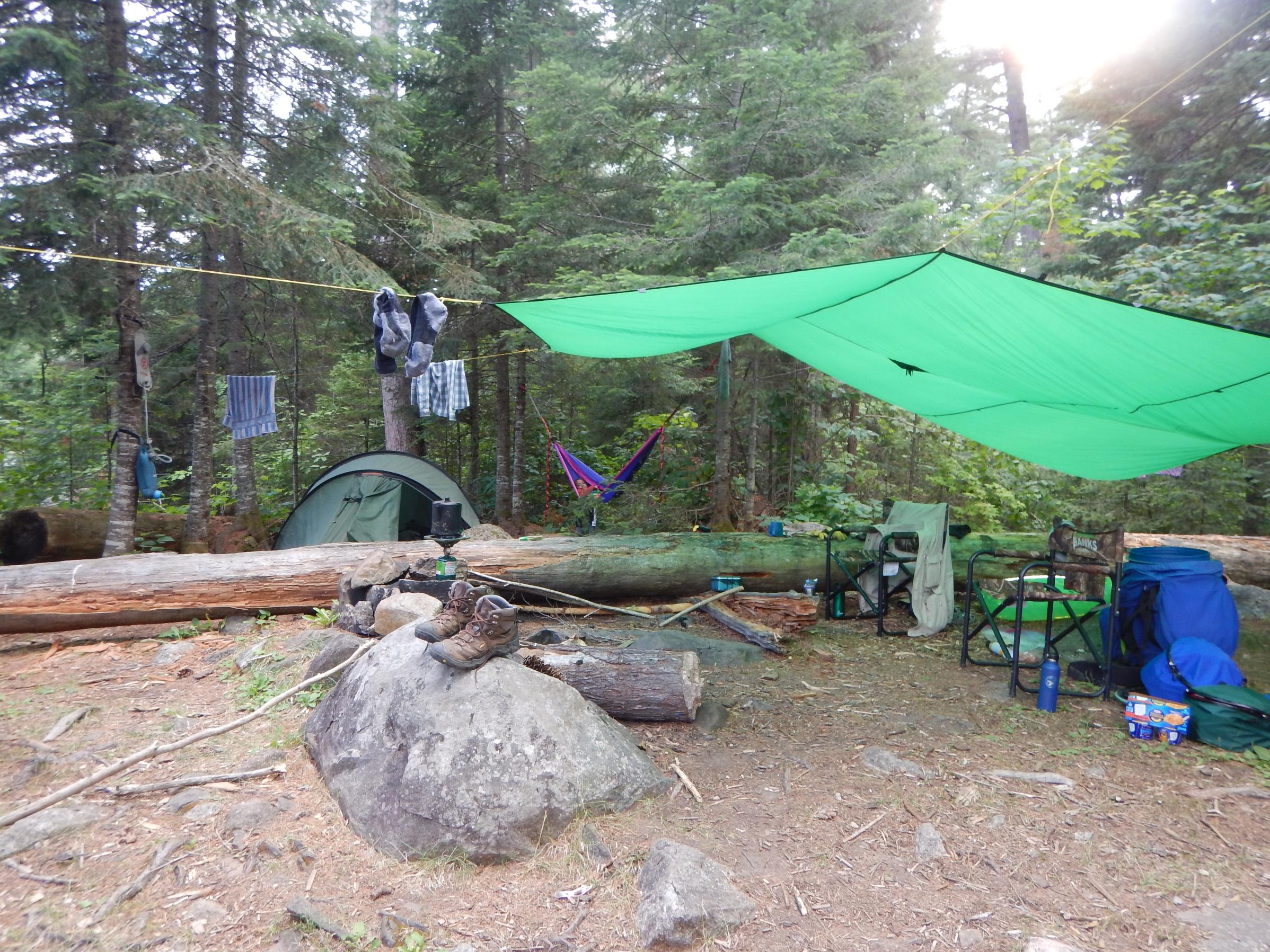 Having enjoyed a long respite in the hammock, Aurora now finds some frogs down by the lakeshore that keeps her busy. I’ve pretty much got camp setup the way we need it and it is still quite early in the day. One of the primary objectives of this trip is to do some serious swimming, and with the midday sun beating down, Aurora feels it’s high time to start doing just that. It takes a little convincing but, I get her to agree that our campsite isn’t the best spot to swim from so, we hop in the Black Pearl and head up the lake.

As we approach the vacant northern most site (#663) I tell Aurora I had stayed here several years back and it’s a pretty good site for swimming. Impatiently, she wants to get out and get started but, I tell her she’ll have more fun at the next spot. As we approach the portage to Rose lake she asks, “Are those rapids I hear?” Trying to keep the secret, I initially tell her no but, quickly reveal that it’s a waterfall.

It’s full blown sensory overload as Aurora sees the waterfall, and the nearby BRT bridge, as she excitedly darts around checking everything out. Even repeatedly climbing the lengthy stairway while I watch from a comfortable, stationary spot at the top. Fortunately, there is currently no one about so we have the place to ourselves. Eventually we work our way to the bottom of the main falls and cool ourselves off. Aurora absolutely revels in this misty paradise and soaks in the pool just below the falls with an enormous perma-grin on her face. She tells me it’s like a hot tub and I should join her. Much to my surprise, the water is exceedingly warm, and I soothe my ole sore bones and muscles in the foamy pool as well. I've heard it said, 'a picture is worth 1000 words.' So, I think the smile on her face speaks volumes about the wisdom of choosing to come here. 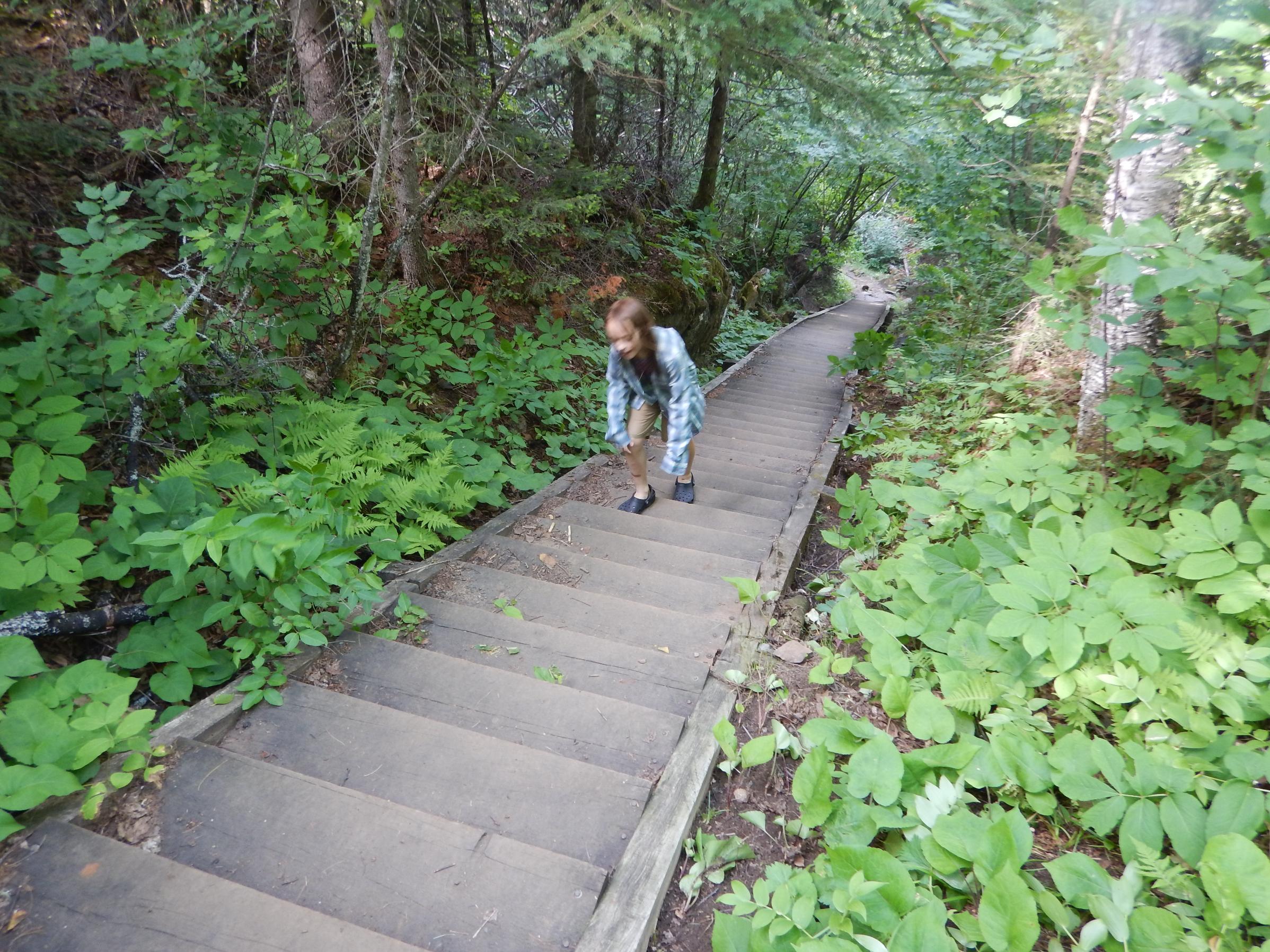 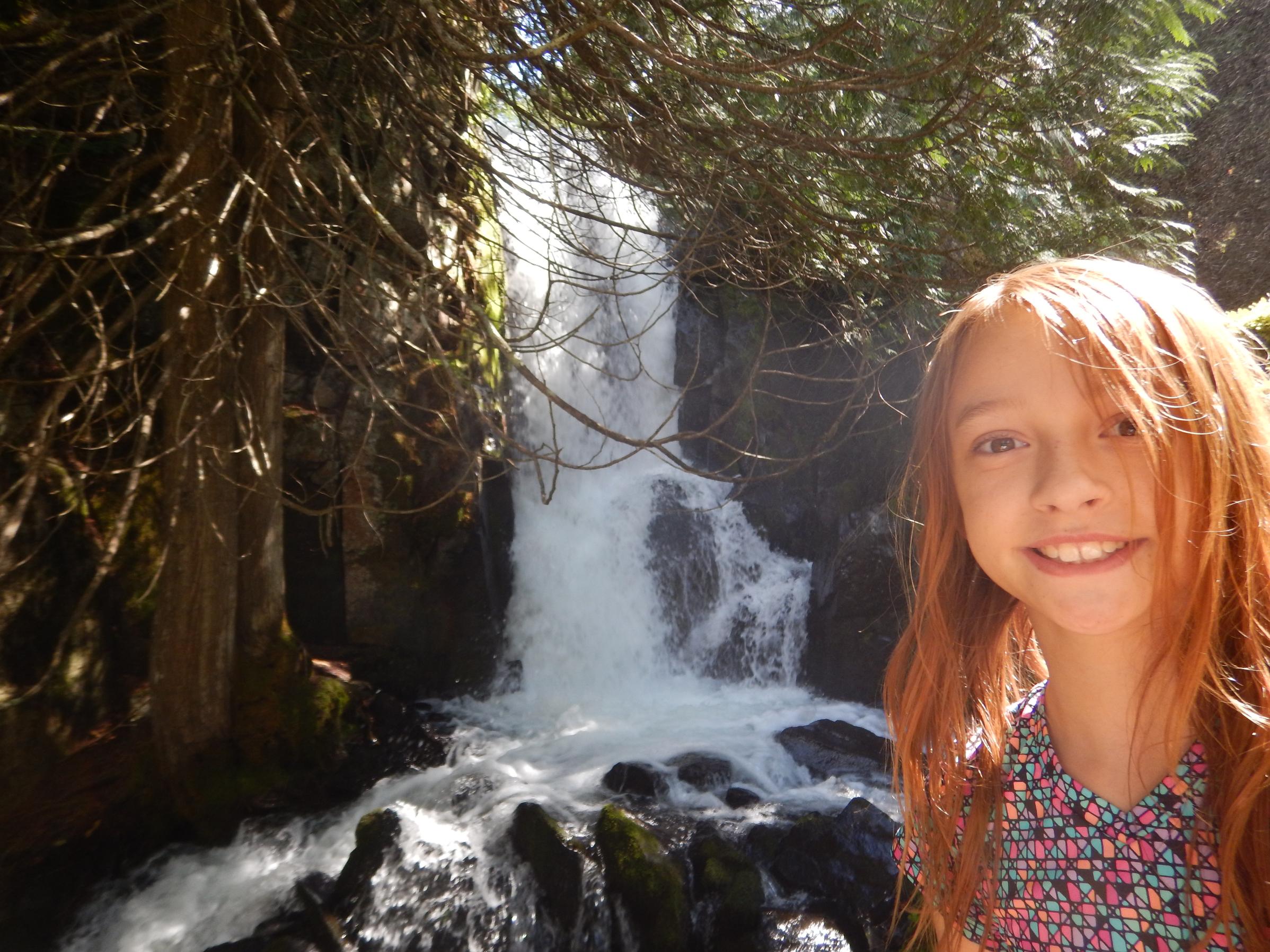 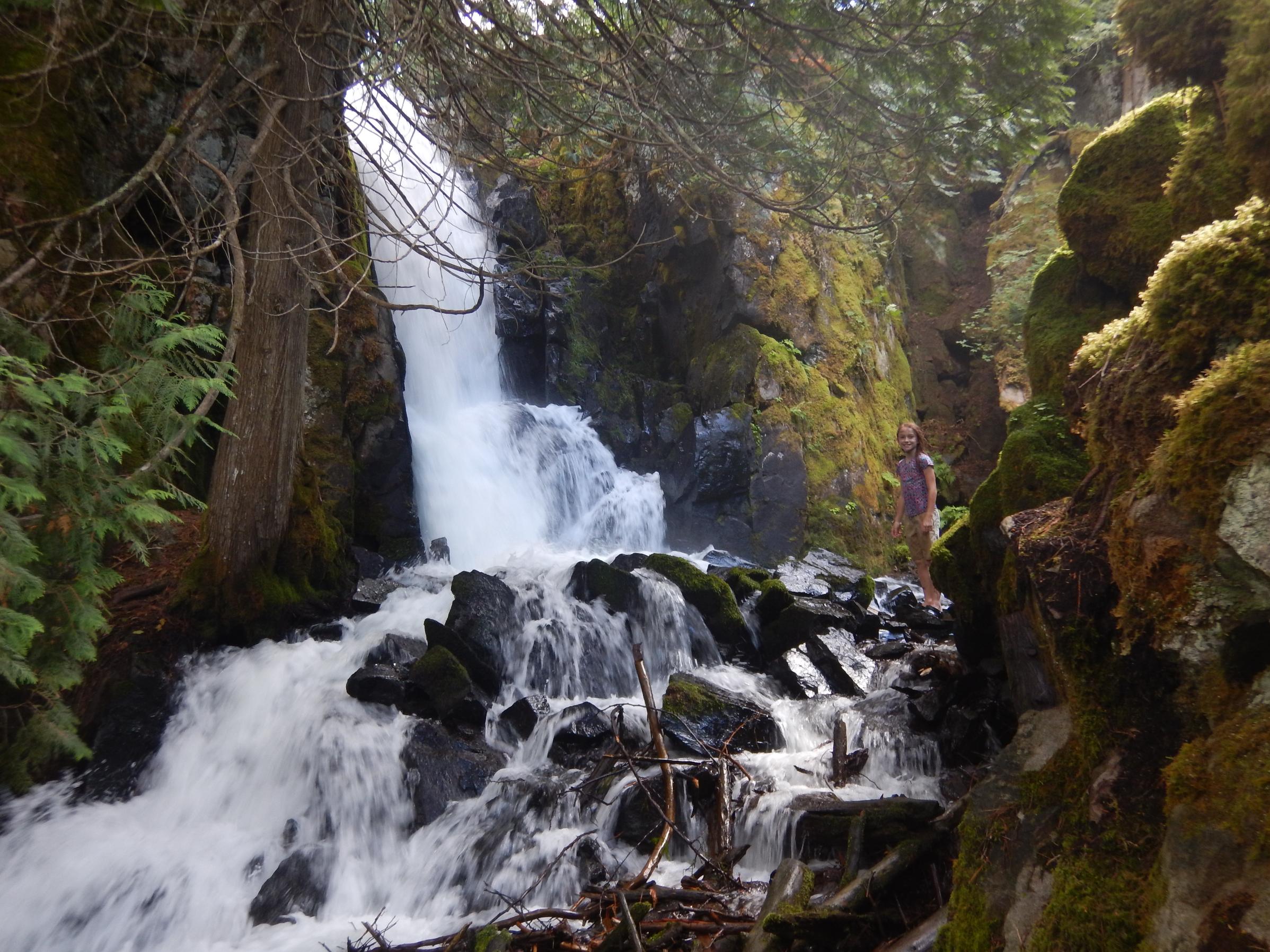 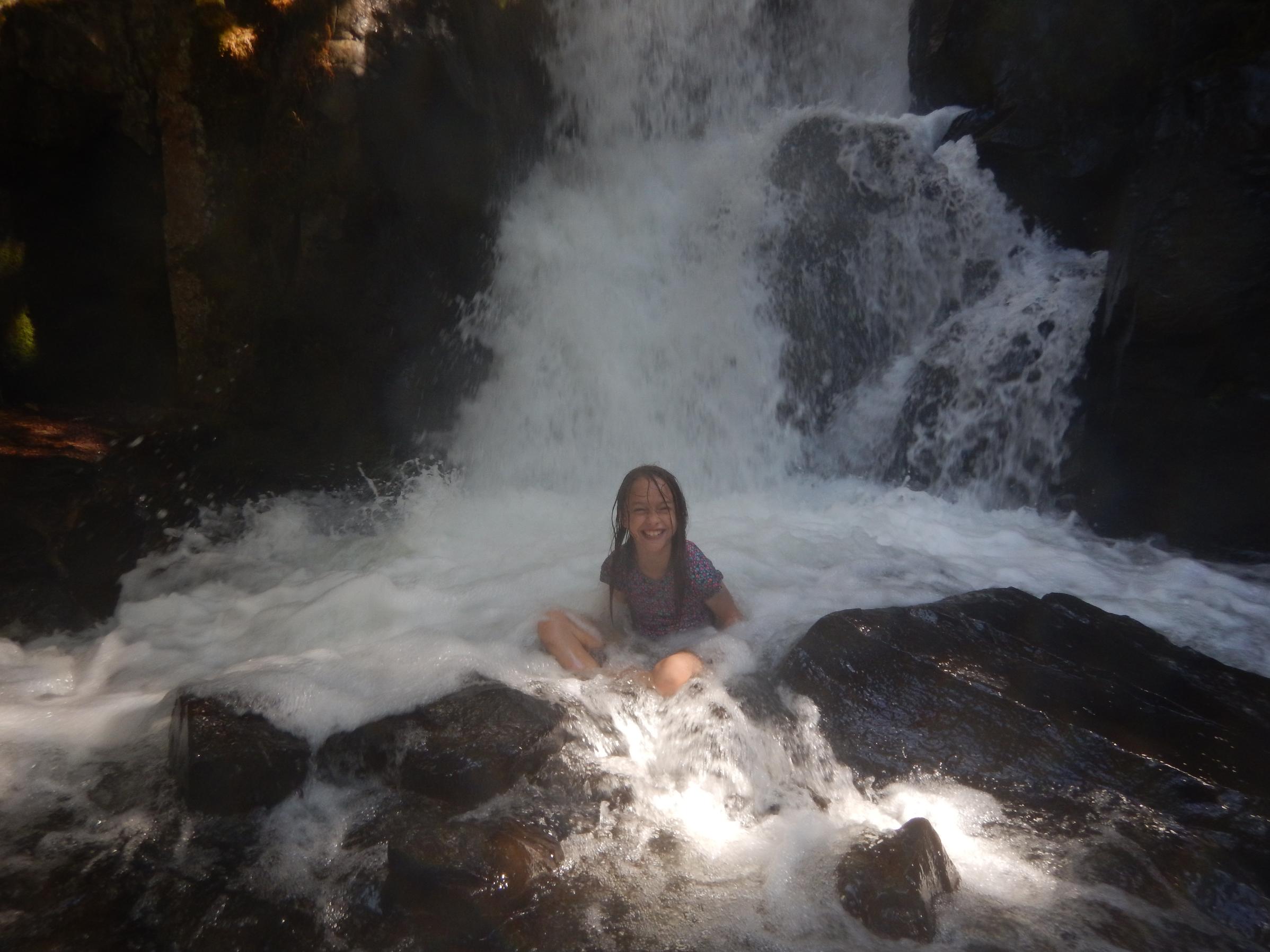 After our lengthy soak, and a little further exploration of the surrounding area, some other people show up and we retreat to the landing. It’s still reasonably early so we paddle back to site #663 and pull in there. Aurora brought a float tube along and we spend the next hour or so playing water tag and various games in the shallow but, somewhat rocky bottomed waters out in front of camp. Finally, hunger overtakes us, and we paddle back to camp. It’s a quick supper of macaroni and cheese but it sure hits the spot. Aurora roasts a few marshmallows for dessert. One Providential thing we quickly notice about our camp is that it is certainly the most quiet and private site on the lake. And, there appears to be a lot of wildlife inhabiting the area as we see (and hear) loons, ducks, mergansers, bald eagles and a busy beaver just out from camp. 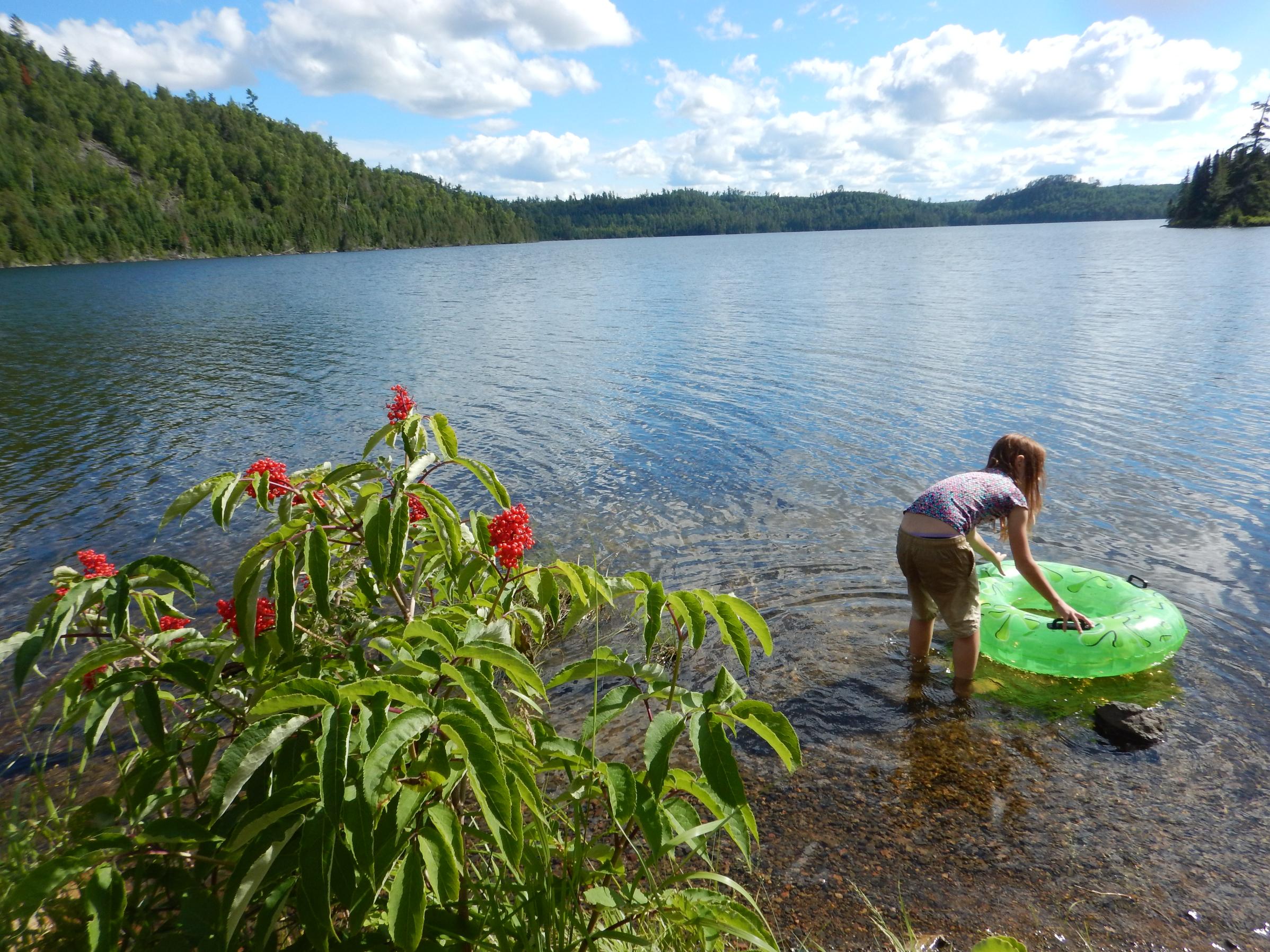