Thunder Point: The view that was worth it. Barely.
by Nelsonti

Trip Type: Paddling Canoe
Entry Date: 09/04/2020
Entry & Exit Point: Moose Lake (EP 25)
Number of Days: 4
Group Size: 7
Trip Introduction:
A Realtor, Engineer, Landlord, Parts Salesmen, Maintenance Supervisor, Pharmacist, and bio-chemist walk into the BWCA.... and calamity, hilarity, and a whole lot of fun ensue. I am a BWCA regular, but not necessarily a guru. We had a terrific group of a lot of different folks and personalities, and that ended up being the best part of the trip. How the group melded instantly and then throughout the trip was awesome, and certainly not the norm. We had guys fall into the traditional roles such as "Camp Cook," "Guy Who Carries Heavy Stuff," "Guy Who Does Not Carry Heavy Stuff," "Guy Who Tells Stories About How It Used To Be," "Guy Who Brought Too Much Stuff," and "Pyromaniac." But we had other, less noticeable roles too. It was, in retrospect, a fantastic trip. Especially since we were a raw group who packed WAYYY too much stuff, and bit off a tad more that we should be chewing. I won't say who actually came up with the packing list.....
Discuss Trip: View Discussion Thread (10 messages)
Day 1 of 4
Friday, September 04, 2020

We got into Ely on the night of the 3rd. A lot of prep had gone into the trip. We decided to do a Knife Lake Trip because I had heard that the fishing on the lake was supposed to outstanding and some of the best in the BWCA. I set up the canoe rental through Piragis and the tow rental through them as well. I have never done a trip like this with 7 people, so naturally, I packed enough food for 14 people.

We met at our lodge at about 8:30 PM and we all had a couple of Beers. Before we get any further, let me introduce you to the members of the trip. We had me, my dad, my dad's best friend Andy, my Uncle Tim, my buddy Trevor, my brother-in-law Andy, and my father-in-law Dave. Me, my dad, and Trevor had done a BWCA trip on the Sawbill Loop in about 2005 when Trevor and I were in Boy Scouts. I think that was their only trip up here, but they are both very experienced outdoorsmen. My dad's buddy Andy had not been to the BWCA since about 1975, and that was on Knife Lake. How cool is that? Back to Knife Lake after 45 years away. My Uncle Tim lives in Denver and hadn't been to the BWCA in decades, since he did a solo trip here. Dave and Andy do Canada trips yearly, but were BWCA Greenhorns. They proved to have more than enough grit for the trip! So, after a few beers and getting acquainted and catching up, we hit the sack because it would be an early morning.

At 4:30 AM the alarms went off and we packed quick and sucked down two pots of coffee. I was not expecting punctuality to be one of our hallmarks, but that was one of our many strengths throughout the trip! We were at Piragis at 6 AM when they opened, loaded up the canoes, and were at Vosburg's for our tow across Moose Lake at 7 AM. Amazing! Since we all drove from different locations and got in so late, we didn't really have a time to catalog and triage our gear. And we had a lot of it. When we unloaded at Vosburg's the chauffeur's eyes were at big as our packs. They said it wasn't the most stuff that they had ever seen, but the most this year. Ah well, I'm an over-packer, and at least we were prepared for every continency. It was a beautiful morning and the wind was at our back (foreshadowing? Nah.). What could possibly go wrong?

Once at the Portage, we spent some time and consolidated our gear. That helped a ton and made the portages a lot more tolerable. The second portage into Knife Lake is a little longer (40 rods) than most of them and that one I quadruple portaged. Wow. But, that just shows how much better we got. By the end, we were all just double portaging. That's a serious statement when you see what we brought.

In all reality, I was really amazed at how well it went. We had a huge range of camping/canoeing experience and ages ranging from 30 to 61. We had no sprained ankles, no strained muscles. It was 6 portages and these guys crushed it. I have a military background and we have a phrase called, "Embrace the Suck!" That became a mantra, and once we admitted to ourselves that the BWCA was made by God to be A Fine and Pleasant Misery, we had a great time.

Once on Knife, we decided to check Robbins Island. We found the Westernmost was open, but was pretty wooded, so we decided to head to the South Shore. We found the first site just south of Robbins Island was open, commanded a good view of the lake, and had a nice area for tent pads. We claimed it and decided to unpack. We ended up having 2 six man tents and a four man. We ended up just using one of each. We were all pretty beat and famished, and after carrying in the food we recognized our great need of gluttonous behavior so we wouldn't have to carry it back out. So, we ate. And tapped into the whiskey. Everyone brought Scotch and Bourbon, so I took the alternate route and brought Blackberry Brandy. I thought we'd never drink it all (foreshadowing!).

After we each ate about 2 lbs of food we went out and fished for a couple hours. It was not fast and furious. For what we may have lacked in BWCA experience, we totally made up for it in serious fishing experience. With the exception of Uncle Tim, we are all really avid fishermen, so for us to struggle to catch fish like this left only one conclusion: They weren't biting. We even brought depth finders for the first time - I think it was very effective for future fishing trips. Uncle Tim caught a 14 inch small mouth and Trevor caught a smaller northern. We got several very small smallmouths and decided to head back to camp for steaks.

My dad picked out some amazing New York strips and they may go down as some of the best steaks that I've ever eaten. While everyone decided to stay in camp and have a campfire, Trevor and I hit the water and fished for a bit. Again, it was slow, but a beautiful evening. That night we hit the whiskey pretty hard, but it was good fun and everyone enjoyed catching up. Andy, our resident pyromaniac, put on enough wood per stoke to see the fire from space (not really), and we had a great time. We were tired from the early morning and portaging, so we headed to bed around 10:30 PM. 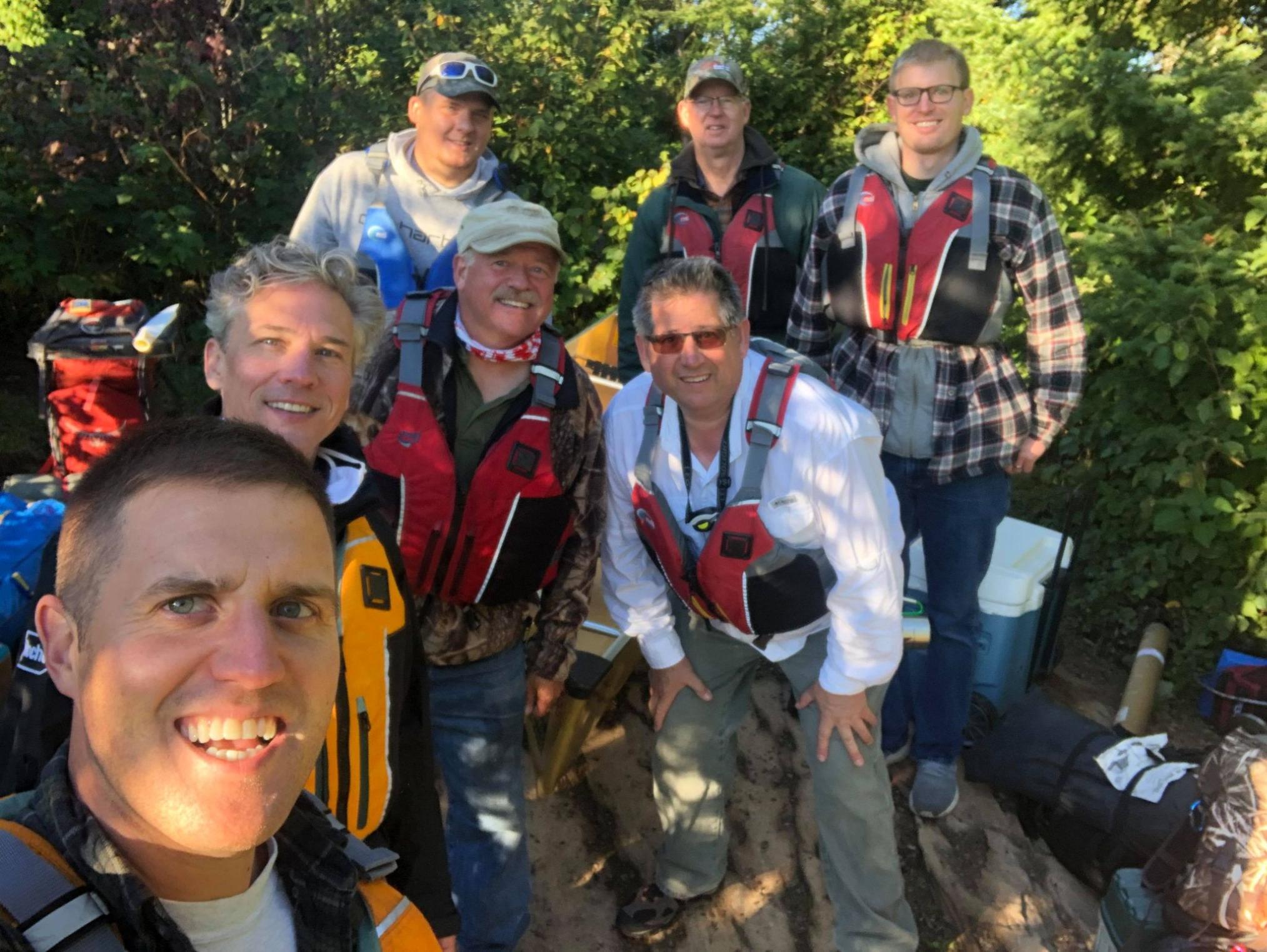 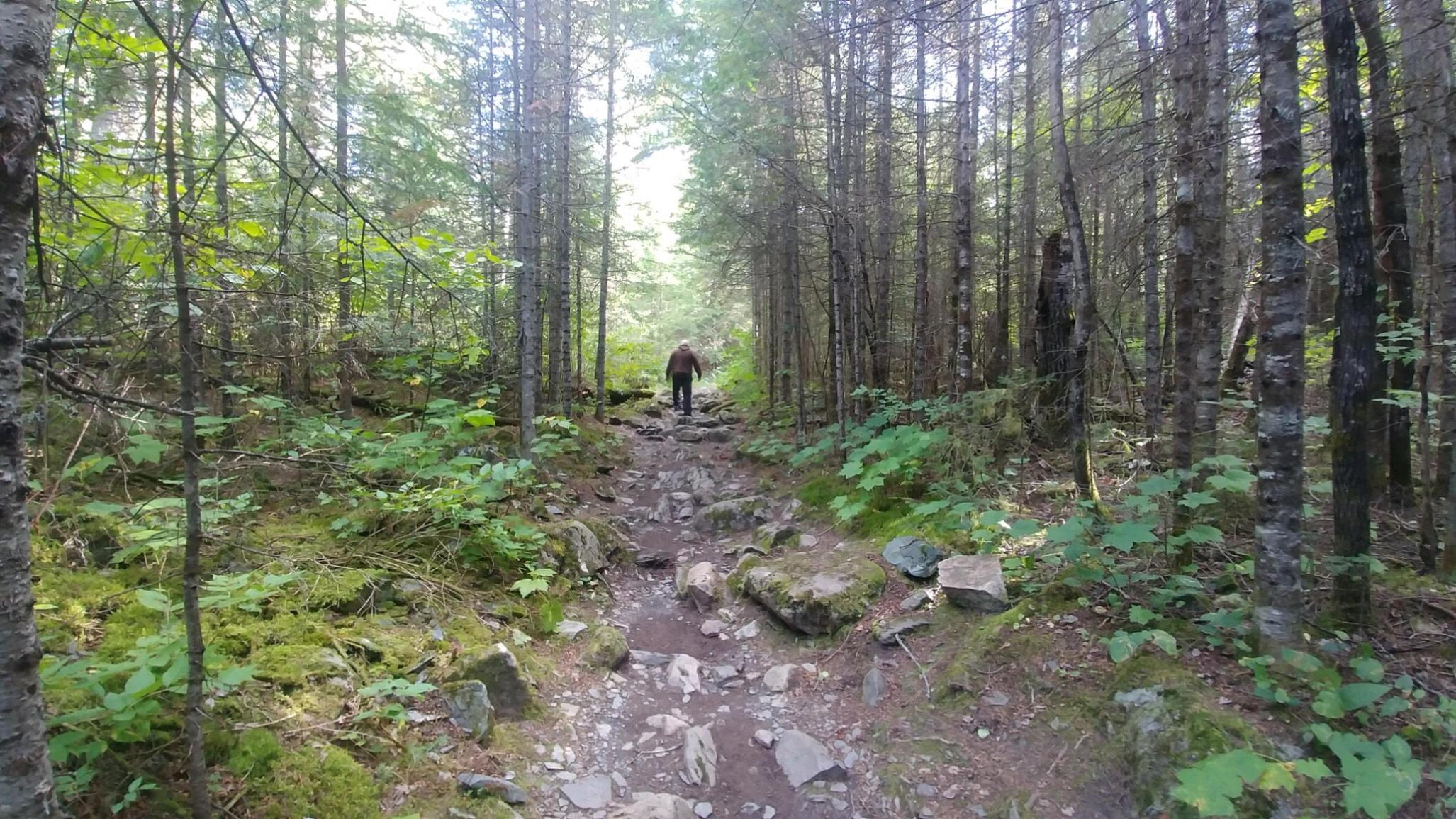 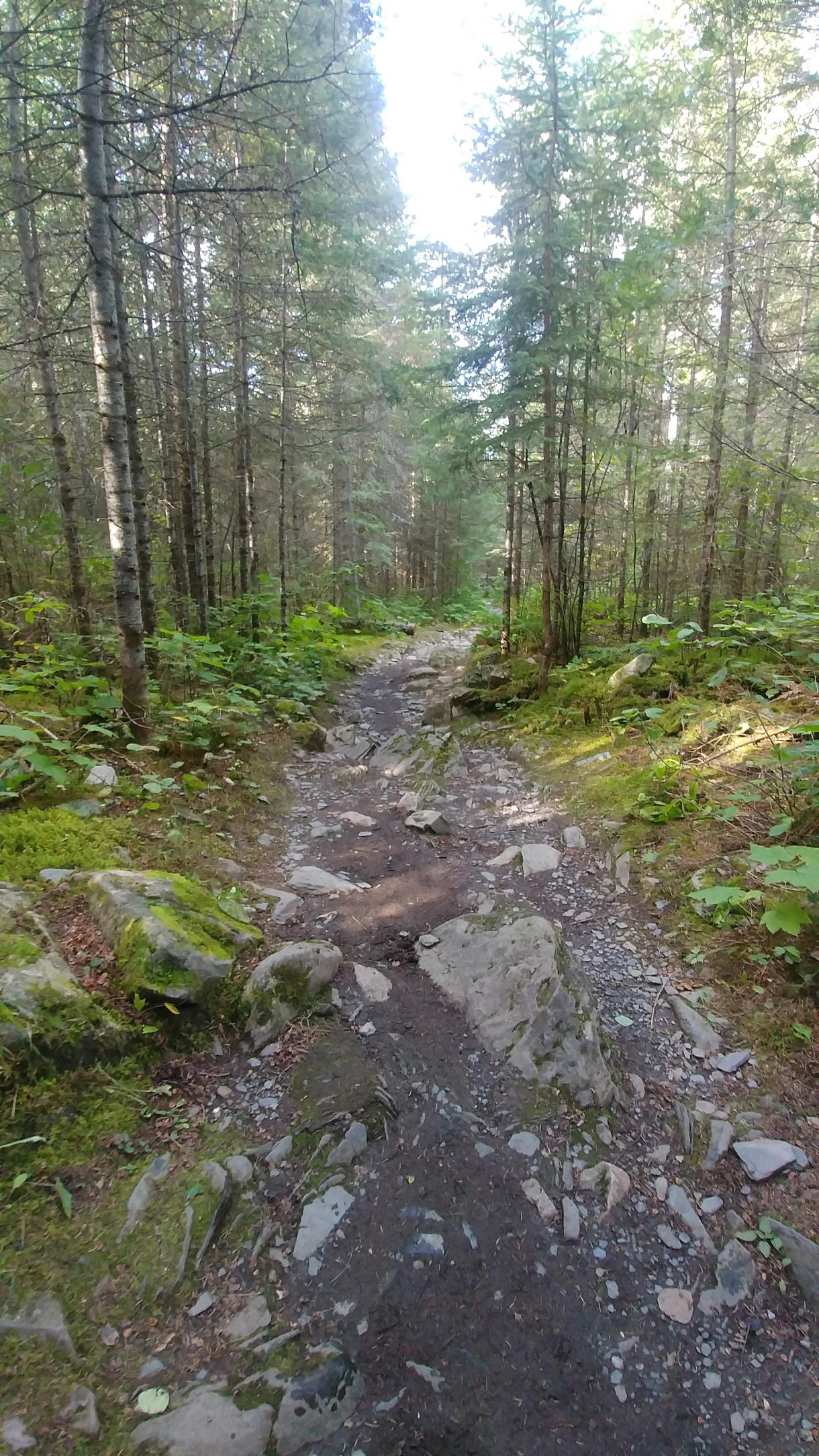 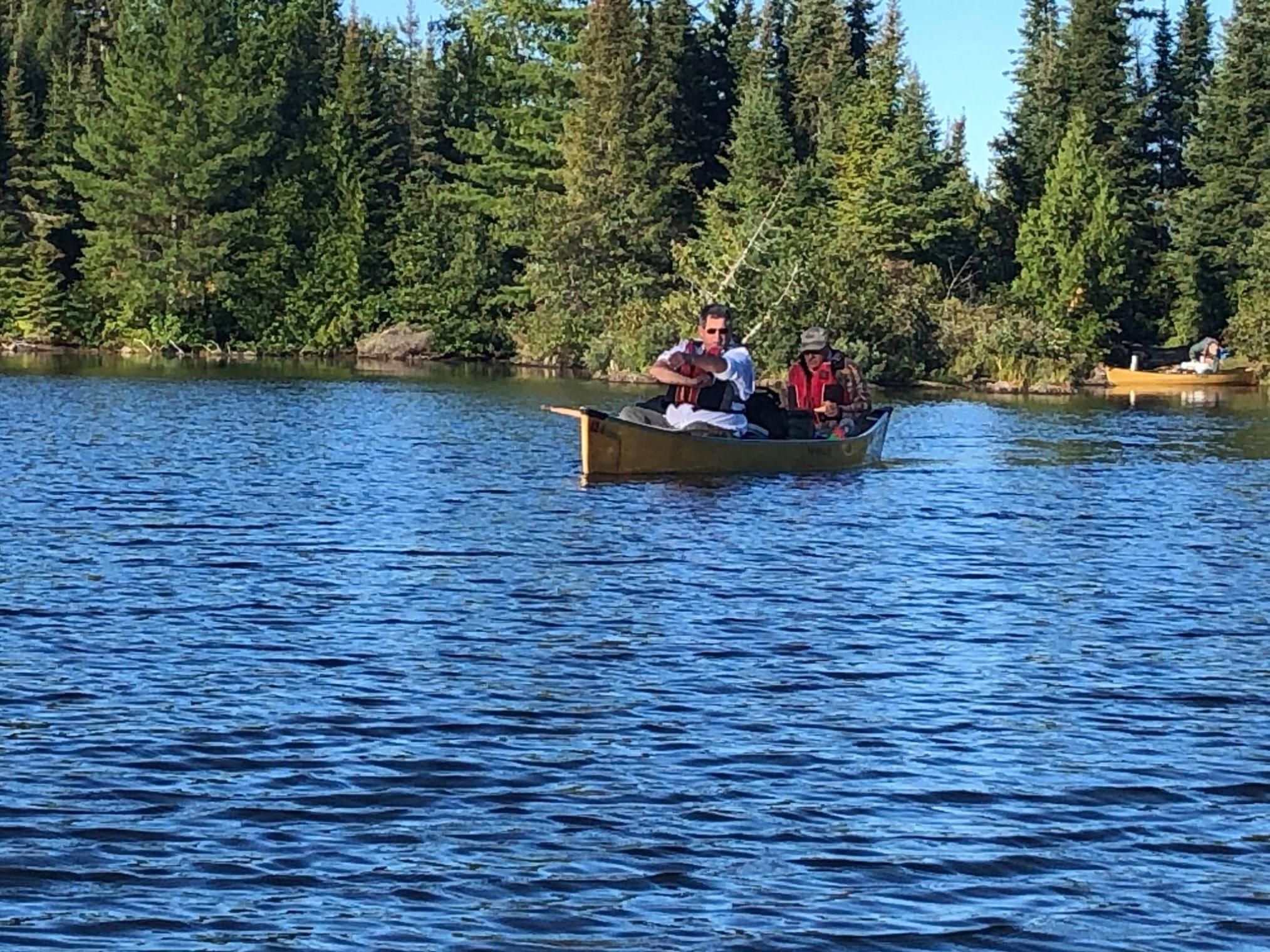