Even though I started my day at the same time as yesterday, we made pancakes so we didn't leave the campsite until 10 a.m. We watched a bald eagle riding the thermals very close to us with the sun glinting off its white head and tail. Then it came in for an extremely graceful landing in the tippy top of a tall spruce tree. 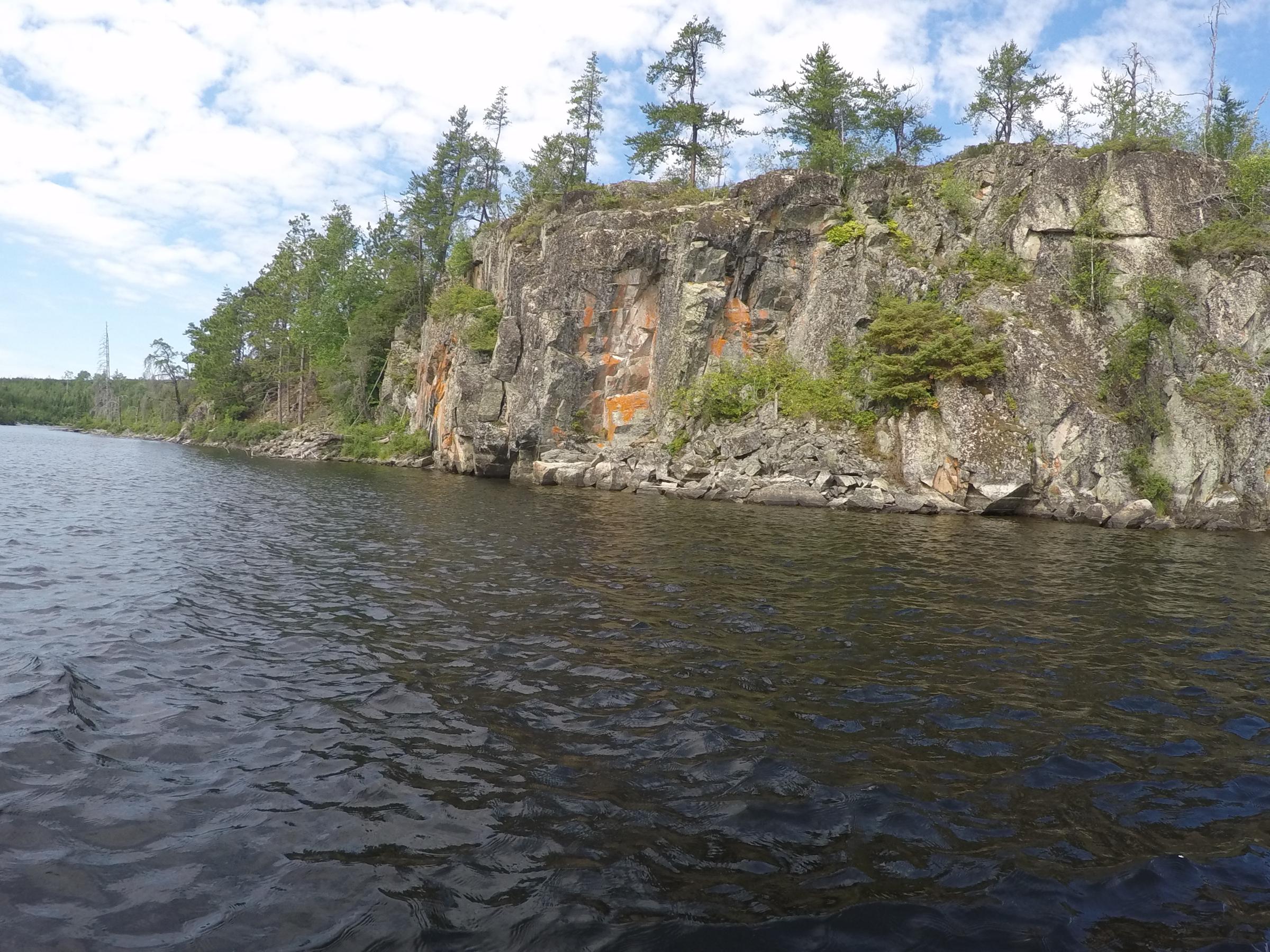 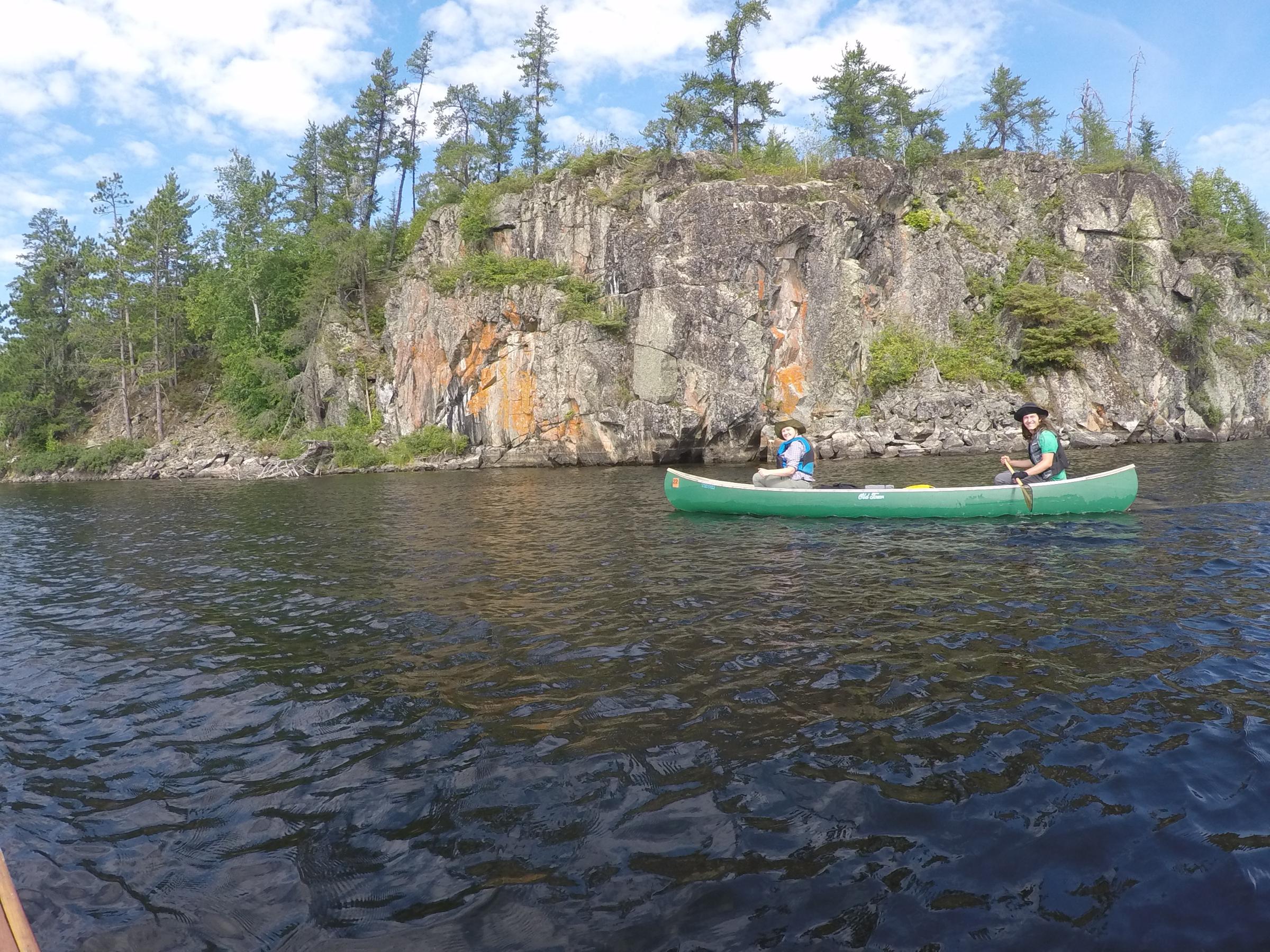 We saw plenty of canoes traveling from Saganaga to Alpine starting at 8 a.m. The wind was coming from the south today and it was a stiff wind. We really should have gotten an earlier start, but not sure it would have made much difference. Morgan took our advice about using her torso and lower body in her paddle stroke, not just her arms and she said it really helped. She loves to sing to help her zone out and ignore her tiredness and it is lovely to hear since no one in our family can carry a tune. She says all the portaging and paddling is making her back feel better than it ever has. 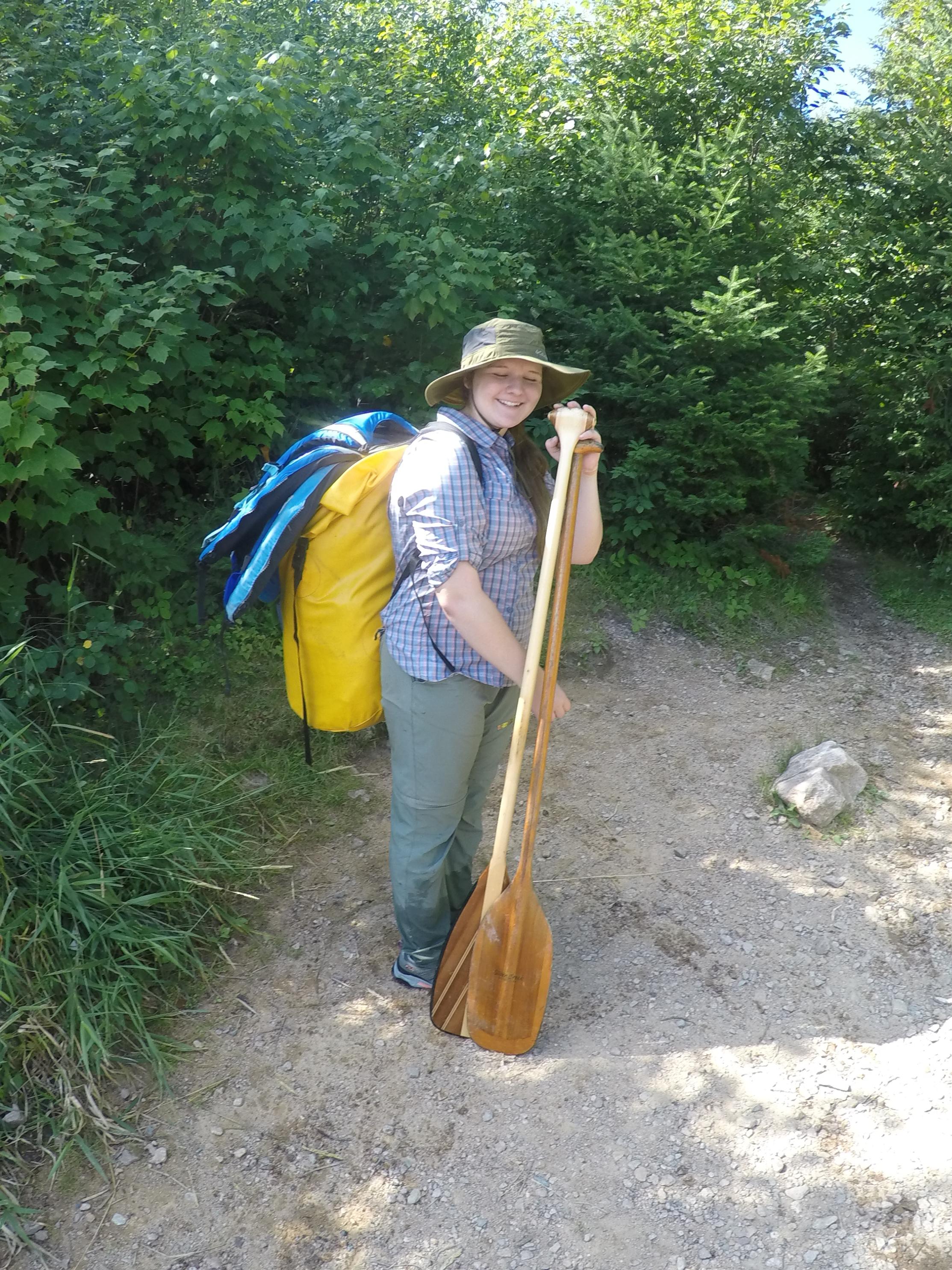 We single portaged again on the 48 rod. Oof! that Old Town Tripper sure is heavy! But I went the whole way with it. Alpine was very windy, but we used the lee of the islands whenever possible and wind ferried when necessary. We thought we would double portage the 97 rod because I wasn't sure I could carry the daypack and Tripper the whole way. However, someone had left their canoe pulled up on the landing w/ a food barrel still in it and had taken just their packs across. It was so annoying to have it blocking the landing that we made the decision to single portage just to show them up a bit. Petty? Sure, but satisfying. I planned to shift the Tripper to Joey if I couldn't make it the whole way, but darn if I am not stubborn. After the uphill, I was able to fast walk and trot because that portage is so flat. A nice father and son combo kindly stepped aside for me as they were bringing their canoe and pack across. Morgan was farther back and returned the favor by stepping aside for them to pass her. Then we met the "rude" couple returning for their gear that was clogging the landing. They did step aside for me and for Joey with his pack, but they refused to step aside when Morgan tried to go past with her pack. They just charged right at her until she felt she had no choice but to step off the path. She sensed they were NOT happy with each other and that the woman was pretty PO'd with the man. Maybe it was their first AND last trip together.

I powered through the entire portage with the Tripper and even had a perfect 1-person down in the wind. Woohoo, still got it! We all accomplished a beautiful, efficient single portage and walked the packs straight into the waiting canoes. 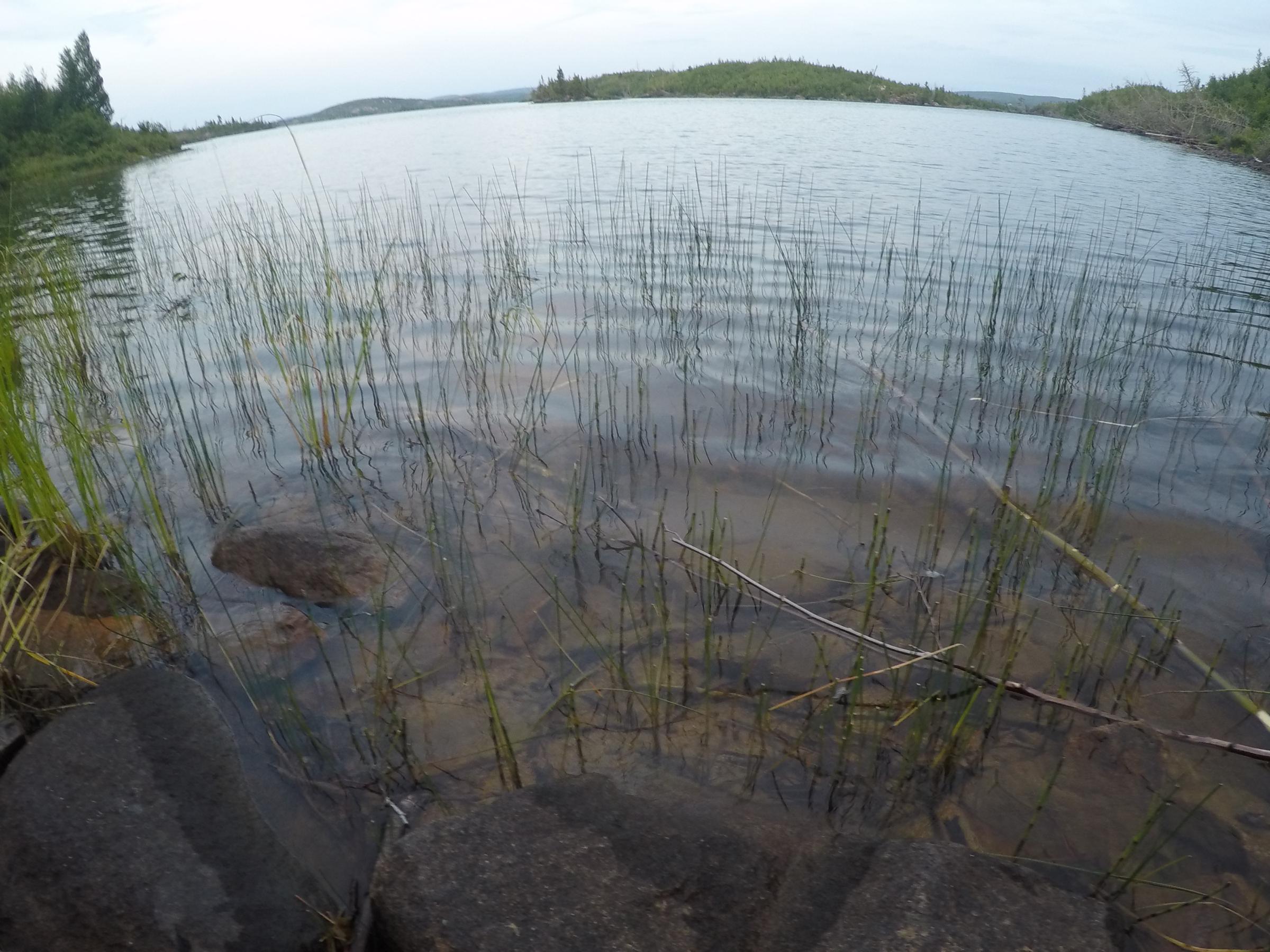 Our strategy for Seagull Lake was to skip all the campsites near the portage and then start checking every site as we paddled along the northern shore with the islands as a wind buffer. The rollers between some of the islands were HUGE! We kept seeing full sites until we ducked into a bay that Joey had wanted to skip over. I insisted we at least take a look and turns out the site was empty. It was tricky to find, but was a gem of a site. While it lacks the big rock slopes of most sites on Seagull, it had 2 sandy landings (1st one better for swimming, the 2nd better for unloading boats).It is a burn area all around except for the main part of the site which sits atop a flat hill w/ tall red and white pines all around. Beautiful breeze today! 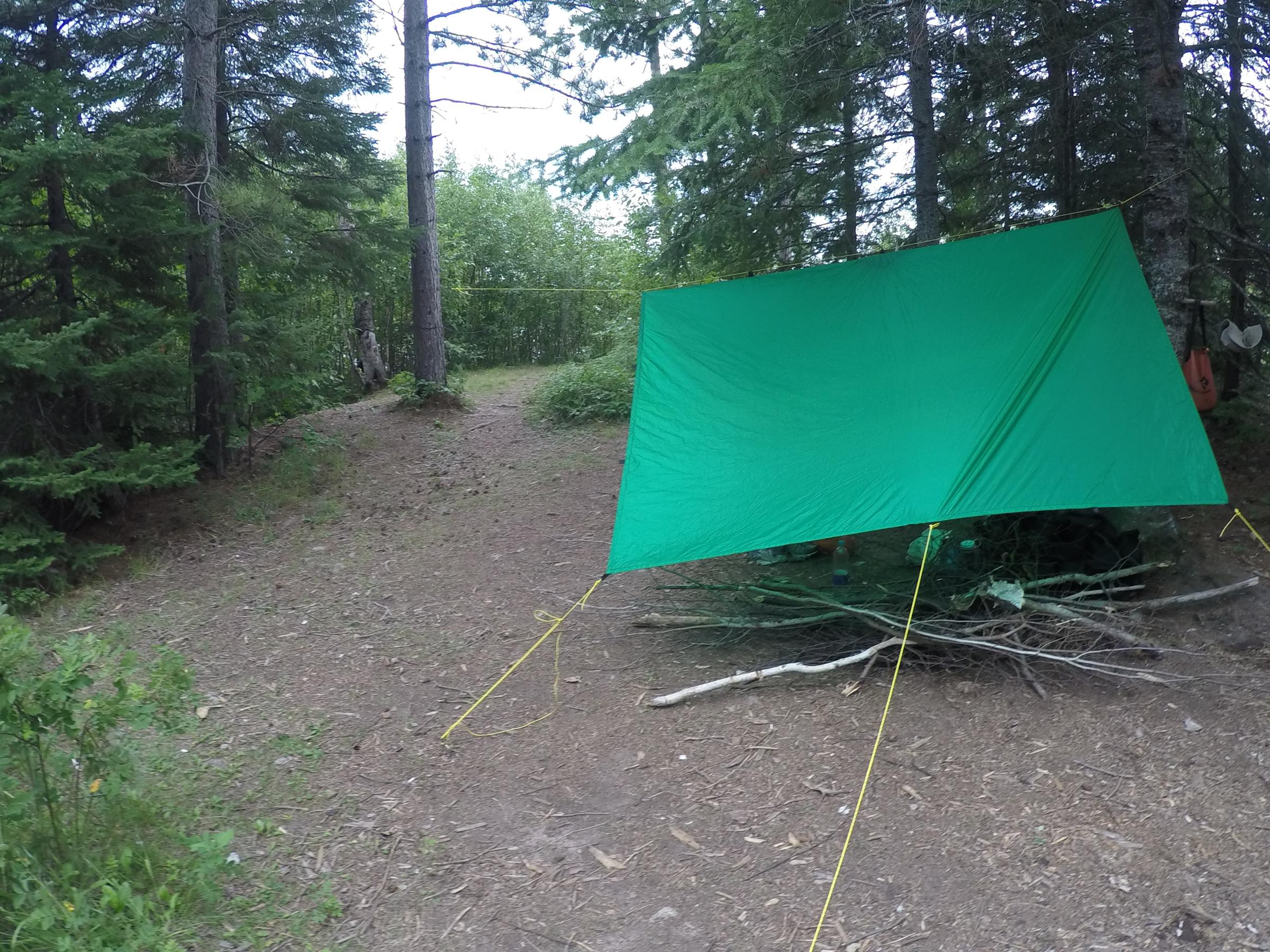 While we were hanging out after lunch, four grouse came strutting down the path from the latrine, nibbling things along the way. After dinner, we were exploring the site. It seems like it used to be an old homestead site and sure enough we observed some old bits of pottery by the shore around the corner from the 1st landing. Then a large hare came hopping into the campsite and clambered into the fire grate area (our coals were already extinguished) and just hung out licking the ashes at times. 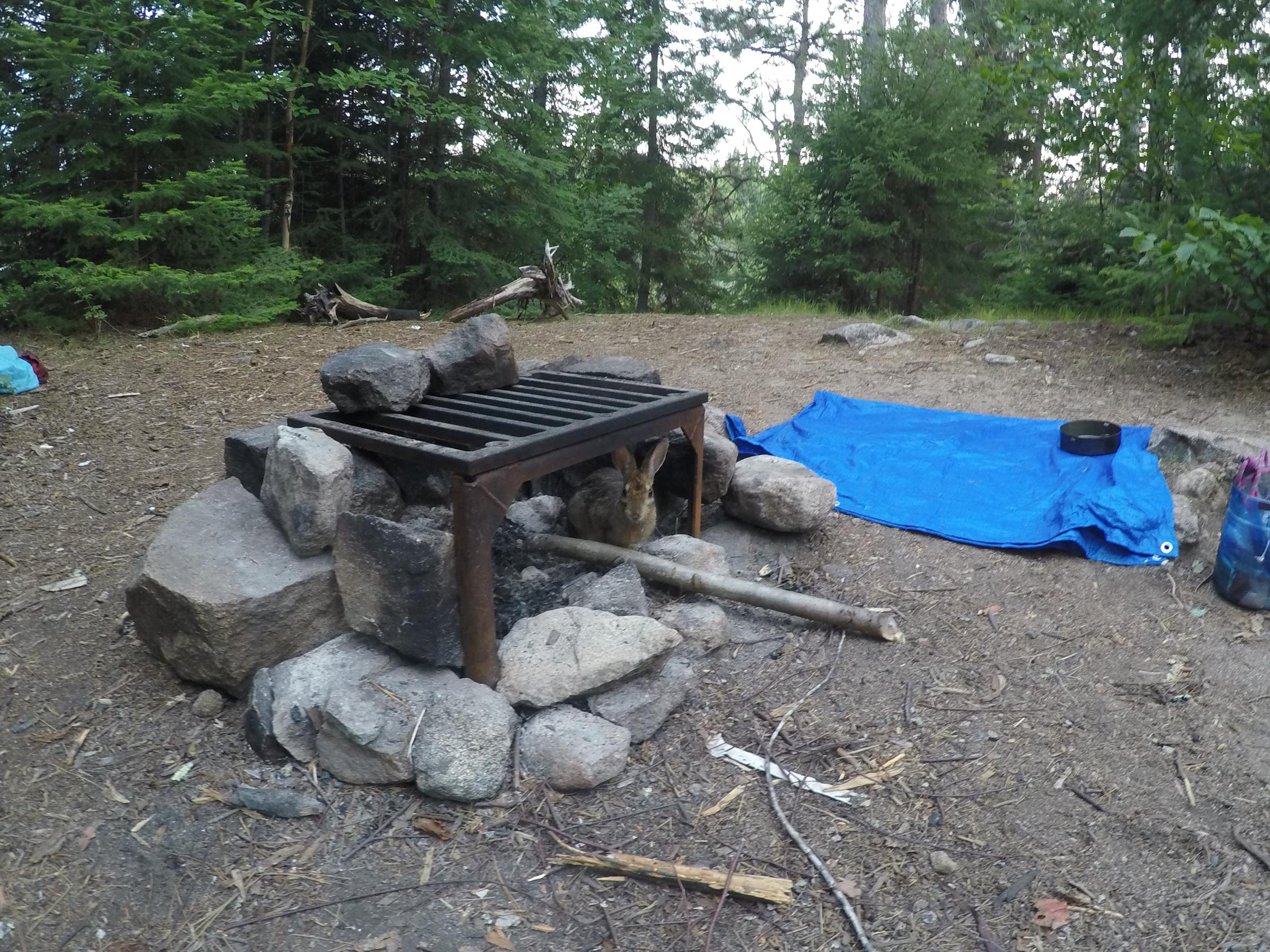