Trip Type: Paddling Canoe
Entry Date: 06/26/2006
Entry & Exit Point: Sawbill Lake (EP 38)
Number of Days: 4
Group Size: 2
Trip Introduction:
After a very memorable 6 day trip a couple of years ago with the PE teacher and 6 high school boys I wanted to give the same experience to my own son. I also wanted to plan and equip the trip myself because it is a special part of the father/son bond I was looking for. After a lot of great advice from members on this site, friends that travel to the BWCA, and reading well written books I felt confident we could handle this. The trip report "A Journey to Manhood" was very inspiring even though Jr. is not ready for the Manhood speech yet. But when that time does come it will be so much easier to work that in to a father/son trip. My brother-in-law passed in an accident a few years ago and if that day ever happens I want to make sure I leave my family with as many special times as I can. I also hope this helps anyone that is hesitant in planning a trip to the BWCA with children for the first time prepare and enjoy the experience.
Day 1 of 4
Monday, June 26, 2006

4:00 AM and Jr. wakes the house announcing it is time to go. Jr. is 8 1/2 years old and has not seemed overly excited about this trip. Last year he was with 6:20 AM the first morning of turkey hunting when I shot a big tom. That was exciting! This year he hunted one day and decided Grandma’s house was more exciting than getting up at 5:00 AM.

He is excited now to get this canoe trip started. I took a shower, loaded the truck, we kissed our sleeping Mom/Wife and we were headed north by 4:30 AM. The ride went fast with 101 questions from Jr. First stop is McDs in Two Harbors, for sausage biscuits, hash browns, OJ, and coffee. Filled the tank with gas for $2.81 and bought a couple things at the bait shop next to the gas station.

Tofte Ranger Station 8:00 AM, watched video, answered 20 questions, took a picture of Jr. with the stuffed wolf and filled water bottles. The ladies at the station were really great with the kid. 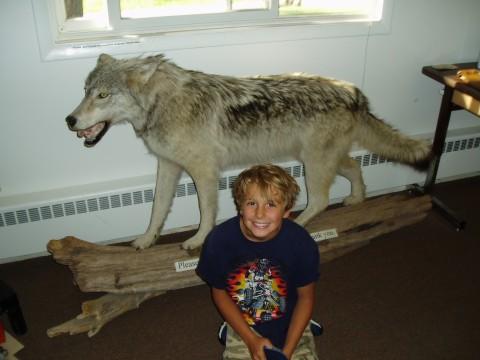 Sawbill Lake 8:35 AM, paddling by 9:00 AM. My Timex, compass watch died. Junk!! Left it in the truck. Beautiful morning, the lake was glass and temp was in the 70s. It seemed like it took a long time to get to the first portage. It is 80r. to Ada Creek and then 92r. to Skoop Lake. The Scoop Creek is a trickle of water and does not seem possible to float. After taking the Warden/Wife a couple of weeks ago I had a good idea of how to take care of Jr. He had a water bottle of Tang and a bag of trail mix with some extra goodies, like Gummy Worms, Bears, and Sour Skittles. I would send him first with his Mason pack to scout the trail. I would then put on the Army pack with food and supplies, and the canoe and catch up with him or if the portage was short enough he would be waiting for me at the end. I gave him a coaching whistle to wear and we discussed that the only time he could blow it was if it was an emergency. No cry wolf. If anything would happen to me he should blow it until some one found him. He was good about that and I felt good about it also. He would wait with the canoe and packs while I went back and portaged my Mason pack, fishing poles, and paddles. His Mason pack had his clothes, sleeping bag, 2 sleeping pads, water bottle, and the 6-pound Eureka Tetragon 5 tent. The pack weighed in at 25 pounds. We practiced carrying the pack up and down the drive the night before. After the first portage Jr. was left alone with the canoe and when I came back he was crying that he wanted to go home. I didn't understand until I saw all the welts around his neck from the mosquitoes that were attacking him. I sprayed him down with some good bug dope and he noticed they were going away. He was ready to push on. On the second portage we crossed paths with a family heading out. Dad was carrying the big packs and a big cooler, the teenage boy carried the canoes, the 10 year old had the paddles and life jackets, and Mom had a pack. We crossed Skoop Lake and started the 180r. portage into Cherokee Creek. Jr. took this one in stride knowing it was the last one of the day and next stop was camp. Cherokee Creek is narrow but very pretty. We had to do a pull over of a beaver dam. Jr. thought this was cool and the beaver dam amazed us how they are constructed. Jr. saw a bear go through the brush over the ridge I just saw the black, furry butt end for a second. 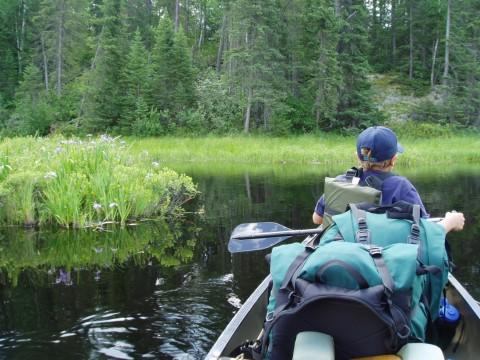 Cherokee is a busy lake and a lot of the camps we could see were full but we were lucky and the one we scouted out on the map was free. It is the fourth site northwest of Cherokee Creek. It is on a rocky point. We set up camp, and found some firewood just in time for a downpour. While waiting the storm out under the tarp I pulled out the GPS to mark our spot and see what time it was. 3:45 PM. At 5:00 PM the rain stopped and Jr. was in charge of fire building. 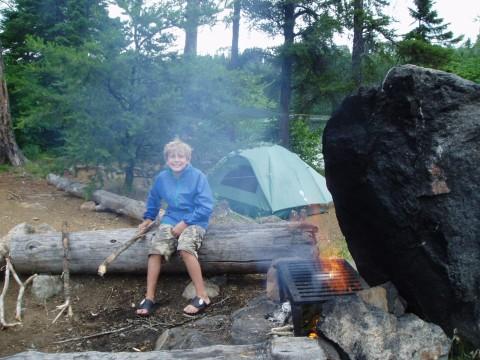 I started supper, 4 venison franks wrapped in tortillas, two packs of Simple Easy Mac, and hot apple cider. His lips were orange all day from the quart of Tang he drank. I cleaned dishes and organized gear, Jr. fished off the rocks without any bites. We then took a swim to the rock island and back. We dried off and Jr. crawled into his mummy bag and was snoring soon after. I took a look at the GPS and it was only 6:30 PM. The night was young and my partner was sawing logs. After 8:00 PM I was writing in the journal and Jr. wakes up asking if it was morning. I fetched him some Tang and he went back to sleep. Four different groups floated by looking for a campsite, one after supper. After the rain it cooled down but we managed to keep everything dry. What a special first day