8:00 AM we slept in. Jr. slept almost 13 ½ hours. I guess we needed it. We took down camp, and packed bags. We made 3 packs of oatmeal and brown sugar over the single burner with apple cider and green tea to wash it down. Oatmeal tastes better camping. 10:30 AM paddling across Cherokee looking for the portage to North Temperance. He wanted to be the first to spot portages and camps. We missed it the first time and beached it on a narrow sandy shore where the second campsite up the east shore is hidden. It is back in the woods and cannot be seen from the water. No one had used it in a while but I am sure a group last night looking would have taken it if they could find it. We paddled back and found the 140r. portage. 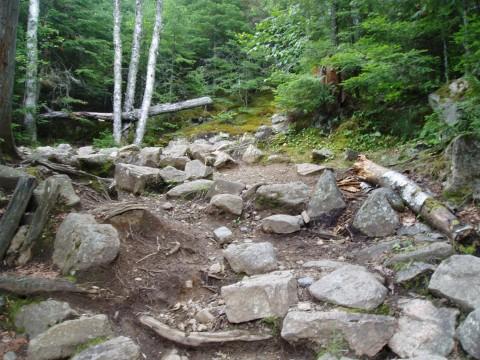 This is probably the most challenging hike of the trip. It is rugged with rocks to climb and seems to go uphill the whole time. We crossed paths with a family with four canoes going into Cherokee. They did a double take seeing Jr. carrying a big pack. He would find places to sit or lean the pack against to take breaks. I did notice any time he saw people he didn’t stop. 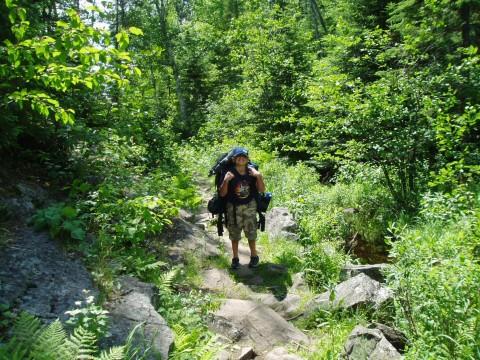 Sitka Lake is short and the 105r. portage at the end is a little steeper than I anticipated. Jr. was wearing out and we still had one more portage until South Temperance where we would stay the night. North Temperance is a pretty lake and we did not see any campsites taken as we paddled by. The 55r. portage was easy and flat but as we started paddling on South Temperance it was thundering in the east. It looked like it was backing up from Lake Superior. We checked the first two campsites but they were taken and we took the one on the northwest end. We put the tarp up and waited the weather out before putting the tent up. It was 2:00 PM. The tent pads all looked like they would pool water so we wanted to make sure to get the tent where we wanted it. Jr. caught a big fat leech after collecting some firewood. We went fishing for a while but Jr. was a little impatient. He did loose his leech to a fish but we didn't get it. I managed to catch a real short Smallie. We shared some beef jerky, pumped water, and Jr. paddled me back to camp while I fished. We made it back in time as the sky let loose. It flooded most of our campsite as the rain came down. Jr. messed around in the rain while I watched under the tarp. We were lucky we didn't put the tent up. The spot he choose for the tent was ankle deep with water. But we did find a nice spot high and dry. I cooked supper on the single burner about 6:30 PM. We had cheesy rice and broccoli, peanut butter on tortilla, salami and cheese on tortilla, and hot cocoa. As we were finishing up four canoes were headed our way but saw Jr. smoky attempt at getting a fire going and turned around. Jr. cleaned up in the lake, found some clean clothes and hit the sack. He started snoring in record time. He will have a tough time finding a girl that will put up with that snoring. I cleaned the dishes and camp, hung the food, and fished in the bay for a short time. I managed to catch a couple of nice Smallies, a short Northern and another Northern pushing 10 pounds. One Walleye chased the Rap to my feet. All fish were released. It would have been a nice night to paddle and fish a little but I don’t dare go too far from camp. The rainy afternoon sucked but it was another great day Father and Son.