EP #26- Wood to Indiana
by ChiTrader

Trip Type: Paddling Canoe
Entry Date: 09/15/2021
Entry & Exit Point: Wood Lake (EP 26)
Number of Days: 6
Group Size: 1
Trip Introduction:
Beautiful, lots of solitude, but drought still an issue with portages
Discuss Trip: View Discussion Thread (7 messages)
Report
Call me The Bringer of Rain, or the Droughtbuster, because the first two nights of my trip, I estimate at least three inches of rain fell on me and my tent. I'm so good, I got the campfire ban lifted before my trip was over! :-)

I arrived at the EP 26 parking lot around 11:30 on 9/15 and lugged my gear down to Wood Lake. All I saw was a sea of grassy reeds off into the distance and a tiny channel of water where a decent landing used to be. I had to go an extra 10-15 rods away from shore to find water deep enough to float me and my gear. Very treacherous footing, so be careful. *NOTE* returning 6 days later after two torrential downpours in two days helped a little bit with closing that gap, but I still had to go an extra 5-10 rods to get to solid ground. Every little bit of rain will help that situation.*

Wood is a beautiful lake and I soon learned a reason why it got its name ( I think). I noticed dozens of deadheads dotting the surface of the water, especially on the north end. Also, the portage landing to Hula looks like an abandoned log jam from a timber cut. Dozens of tree trunks floating at the outlet heading toward Hula and many more washed ashore (or exposed by the drought). I estimated the water level to be at least two feet below normal. However, this was my first time on Wood, and I was going by what looked to be the "historical" normal water level compared to the current water level.

I camped at the north-central site on a small peninsula oriented to the north and east. I'd rate it 5*. Little to dislike about it. The canoe landing was a sandy beach about 10 feet wide and shallow enough to step out easily and safely. There was one large flattish boulder that could serve as a get-in/get-out spot too. The site is elevated about 5-6 feet from lake level and the climb from the landing is wide open and easy. The fire grate is adequate. Two logs form a seating area facing the water. I counted at least four good tent pads, and if using small tents, that could be five or more. But I can't imagine any group other than 6+ solo canoeists, each with their own tent, needing more than five sites.

The kitchen area is open, but there are plenty of large pines for rigging tarps. Two flat rocks on the side of the grate are a plus for food preparation. A tapered, rounded rock ledge extends over the water to the east and would make a good jumping platform for swimmers on a hot day. Also offers nice views of sunrises and moonrises.

The latrine is a short easy walk from the kitchen and offers full privacy.

I liked the site so much, I stayed there again on my way out.

Portage to Hula is short and relatively easy. Hard to discuss the landing because the water levels are so low, but it took a bit of work. With normal water levels, I think it's easier to handle. Hula landing was good. Hula is a strange, atypical BWCAW lake. Very shallow, lots of that reedy grass that is on Wood. Trumpeter swans abound on both lakes. Saw three on Wood my first night, six on Hula on my return trip, and EIGHT on Wood my last day! Incredible birds. So beautiful to look at and fun to listen to.

Hula-Good portage is the toughest of the group. Moderately long and challenging elevation change. Going out from Wood to Indiana was easier since the overall elevation change was down. Coming back, uphill overall. But the trails were wide and dry (duh!) and no spots that would pose standing water risks in a normal year. No maintenance issues.

Good-Indiana portage is another up-and-downer, but shorter than the previous portage so it didn't seem as bad. Indiana is a fairly plain-looking lake, oval-shaped, no islands, no dramatic topography. But the fishing was decent (for me). I caught three nice bass (15-18" estimated) in two "serious" days of fishing. Had a fourth on the line for about twenty seconds that felt like the biggest of them all. I'm a casual fisherman who loves to catch smallmouth bass, so it was enough for me. BWJ rated Indiana a 3-star SMB lake, (the best). I imagine a good and serious fisherman would love fishing the lake because I had it all to myself except for one afternoon when a tandem canoe came in and fished the entire circumference and then some. And I'm pretty sure at least one of my bass was a largemouth. I thought the lake only contained smallies, but I stand corrected. Didn't notice if the first two fish were smallies because I was so intent on getting them off the hook and back into the water. But the fishermen who were on the lake the one day said they'd caught at least one LMB that day. Either way, bass put up a great fight. And those boys were FAT, too!

I camped on the western site of the two. I'd rate it about 4* at most. The landing was adequate (again, hard to know what it would be like with normal water levels.) Appeared to also be about two feet lower than historically normal. It's a steep climb up from the water (2-3 feet) and another several-foot slope up to the kitchen.

It's a large, sloped site, overgrown with roots, so I didn't see any totally flat and smooth tent pads. Room enough for three or maybe four. Unfortunately, one group of trees has a bunch of widowmaker branches overhanging perhaps the best tent pad, so I didn't put my tent there. The site faces south, so it's exposed to typical S & W weather patterns most of the season. Putting up a tarp for a windbreak didn't help much on the worst of the windy days.

The kitchen area is good but not totally level. Again lots of mature pines for tarping options, and it's an easy walk to a secluded latrine. The landing is mostly sandy beach but there are a pair of downed tree trunks on the shore that can be used for loading/unloading. I moved several rocks that were in the way to make it a nice little mooring site for a canoe between the two logs.

The weather was generally too hot for my liking. Got up to 80 my second to last day (moving day--ugh!) Had one night where the temp dipped below 40. That's more like it. A couple of days in the 70s, one in the 60s (perfect!). Other than the two nights of rain that stopped well before sunrise, I got sprinkled on a few times on my last day as I was paddling out. Not even enough to justify a rain suit.

I'd say if you're looking for easy access to good fishing and relative solitude, Wood-Indiana is a darn good trip. 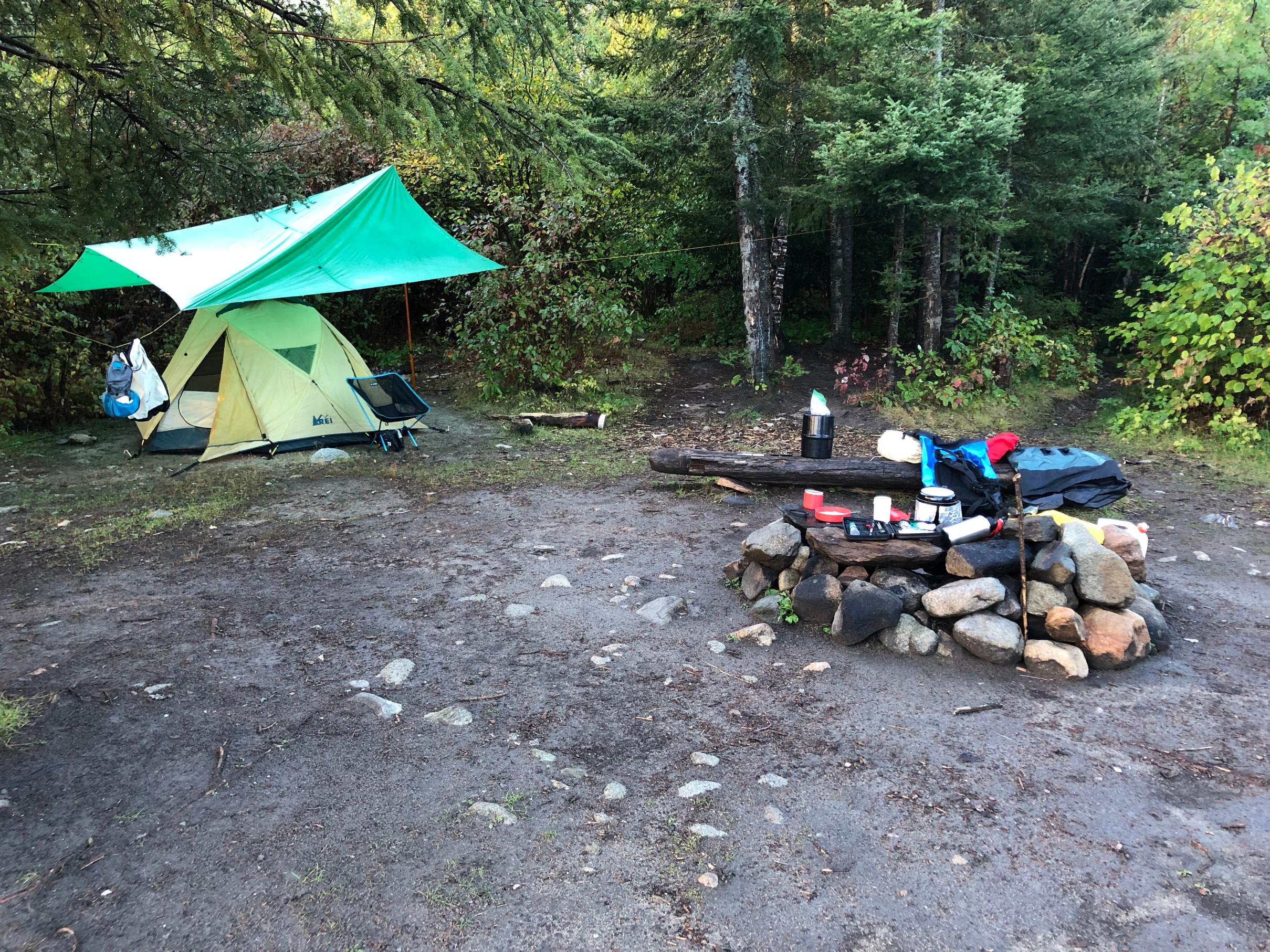 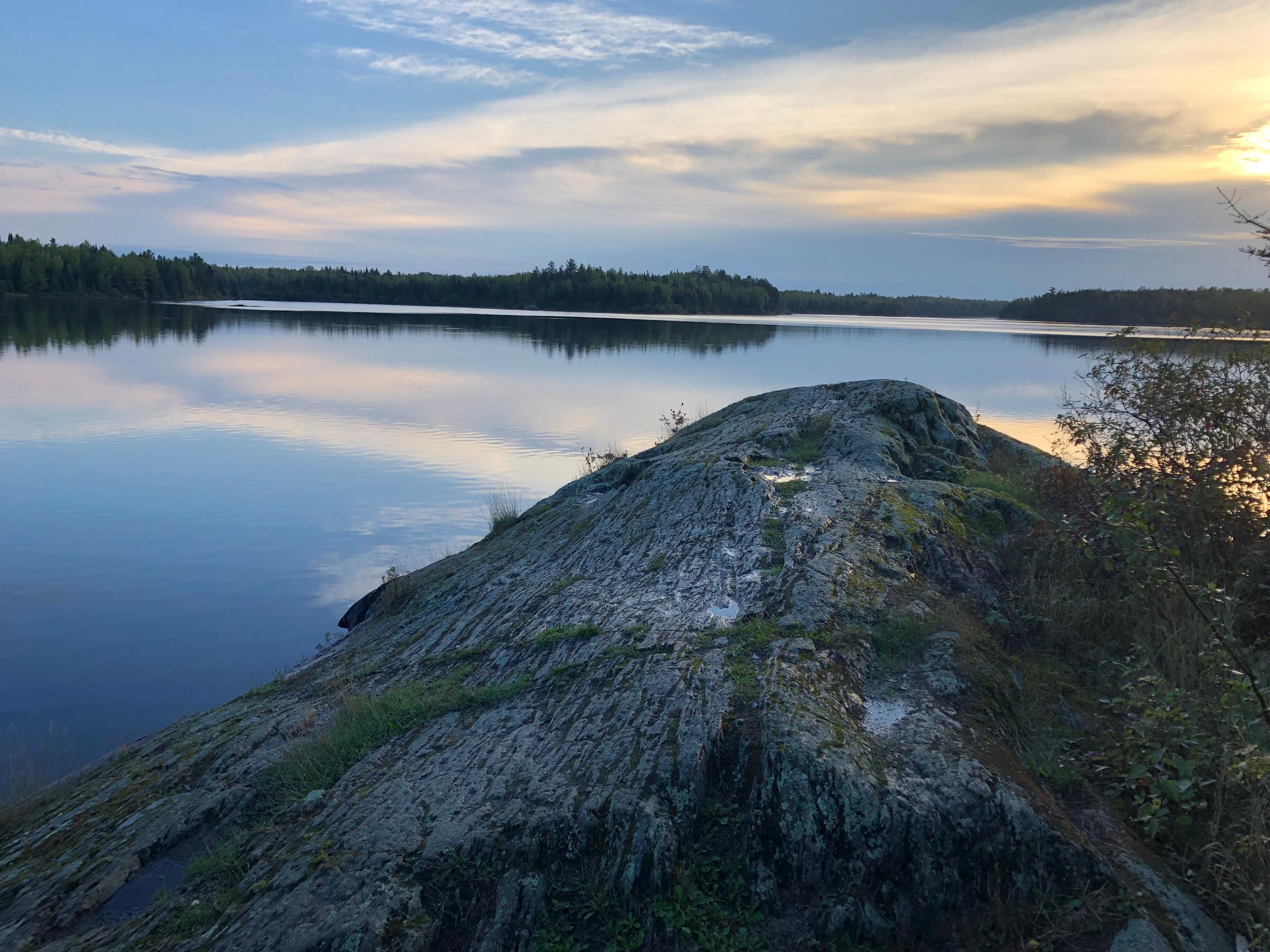 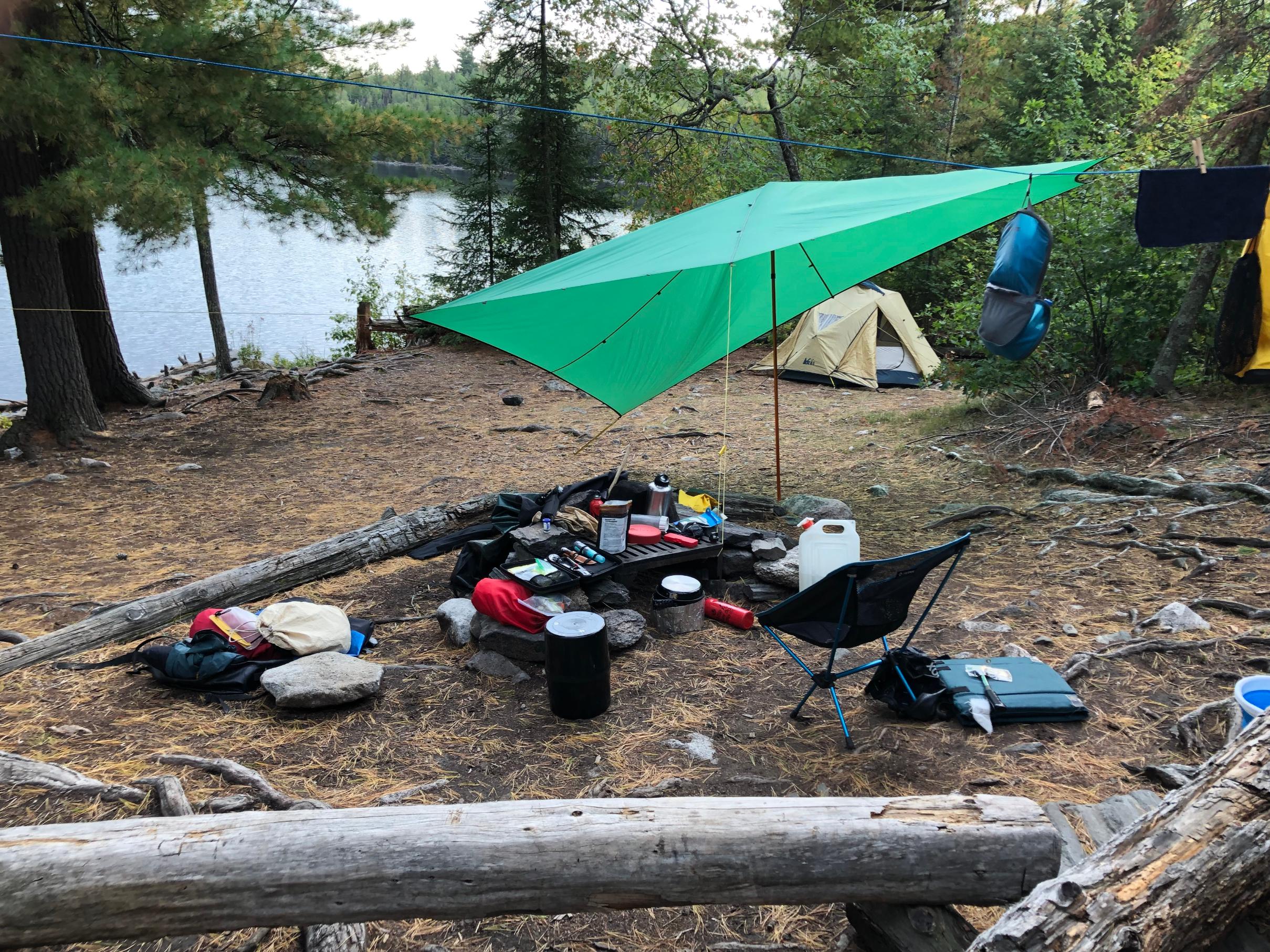 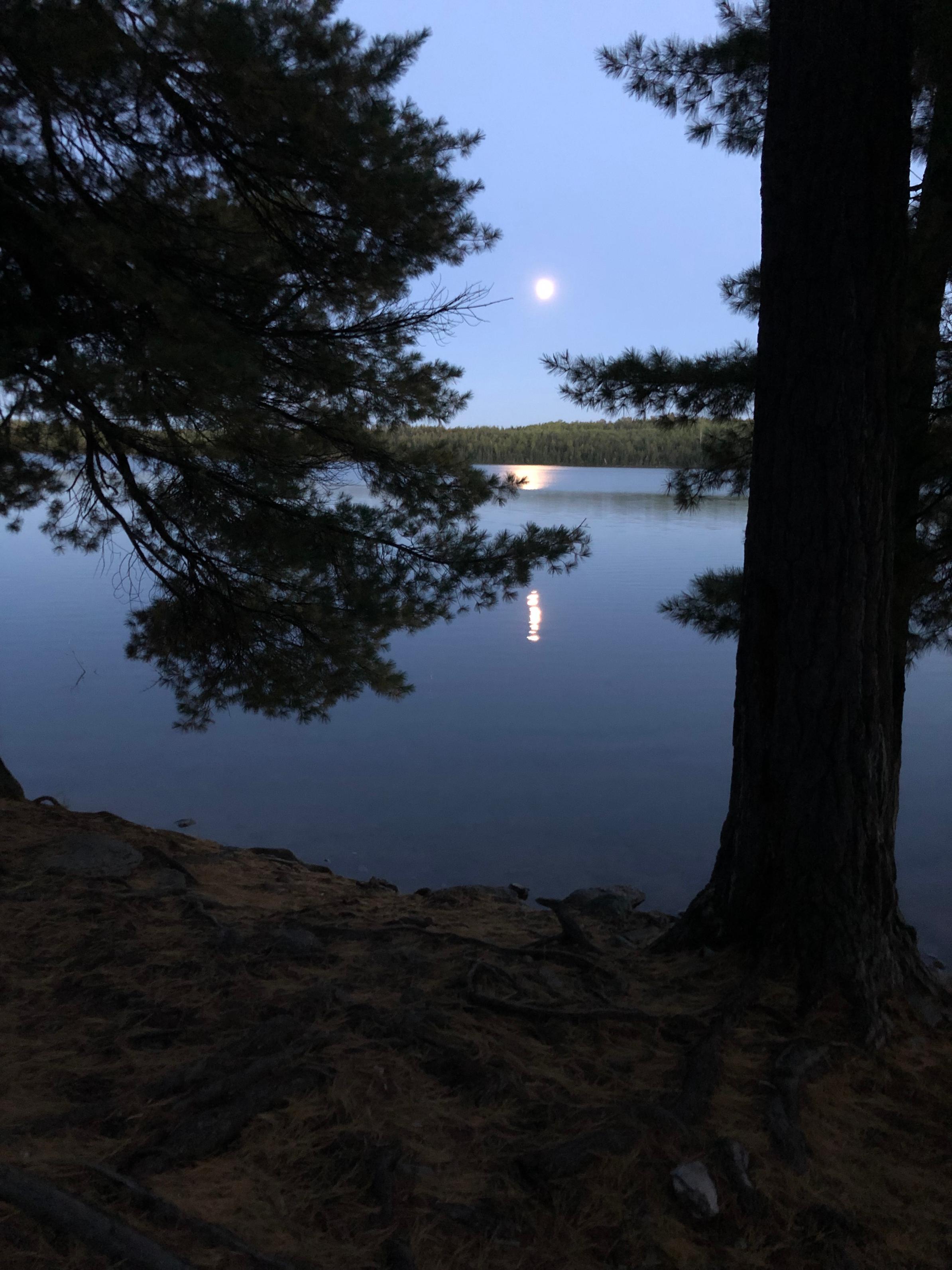 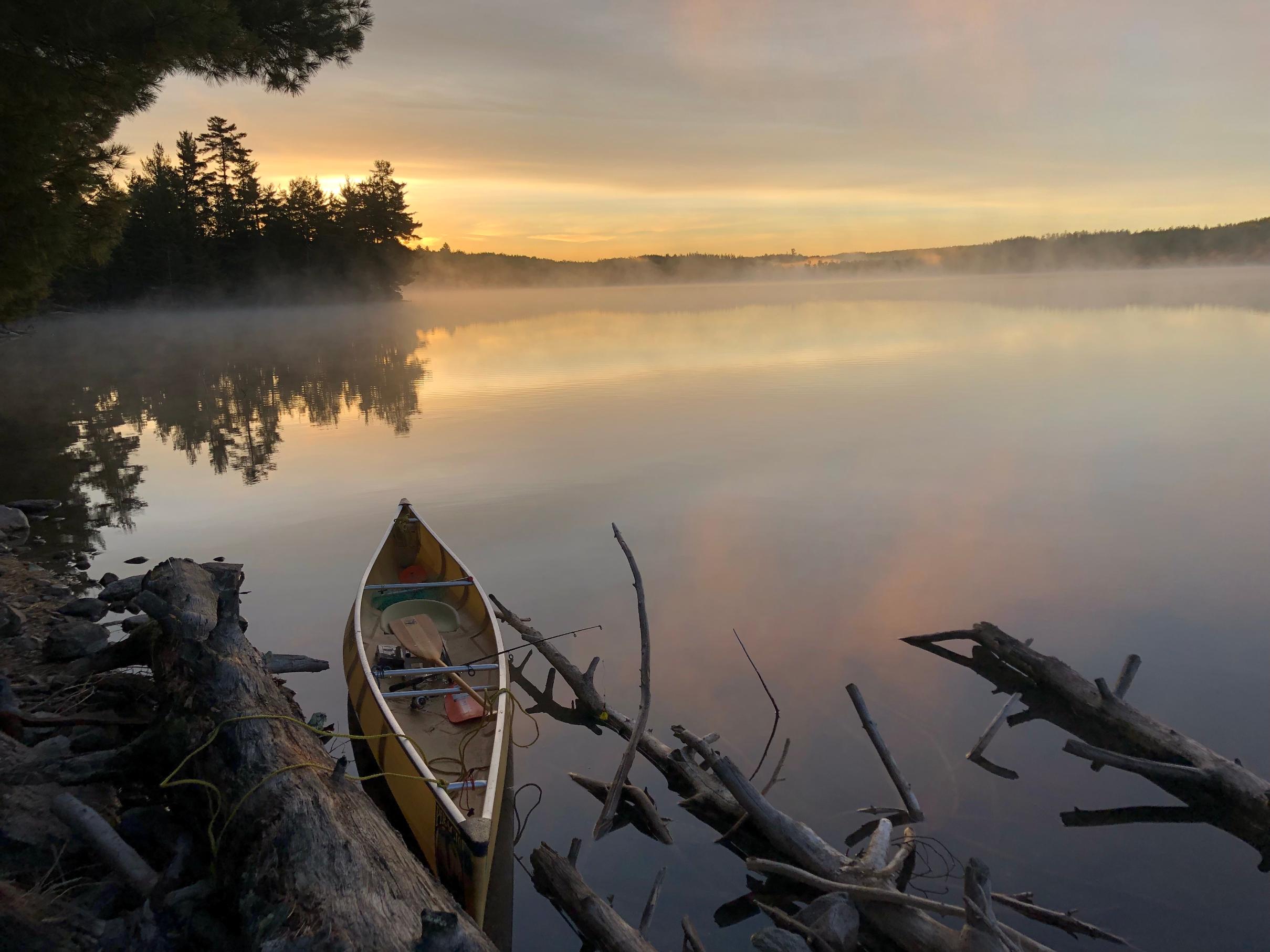 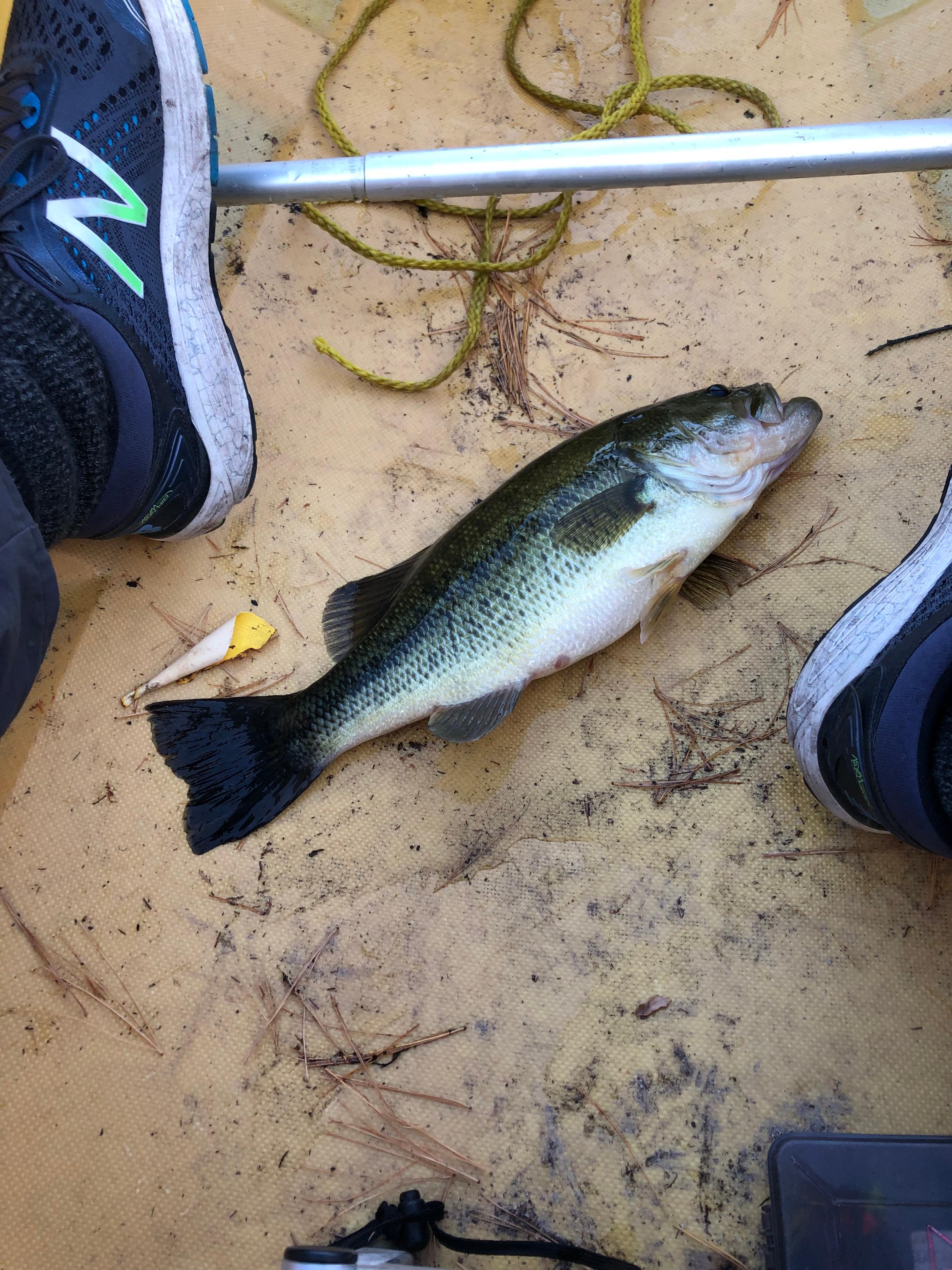