Trip Type: Paddling Canoe
Entry Date: 06/22/2007
Entry & Exit Point: Other
Number of Days: 5
Group Size: 5
Trip Introduction:
I have to get back to the north woods every year or two and this time I took my older brother, his son, and his grandson as well as my six-year old boy. We went to Elbow Lake in the Timber-Frear area.
Day 1 of 5
Friday, June 22, 2007 For the first time in my life I started a canoe trip sick. I didn't let on to the other guys as I didn't want to ruin something we had all be waiting a long time for. I’m traveling with my older brother, his 37 year- old son and 9-year old grandson as well as my youngest boy, 6. I’m 52 by the way and have been coming up to the north woods since I was knee-high to a loon. My brother and his family were on their first trip north.

We began the day at Betty’s Pies – a suitable destination for a northwoods trip in itself. After some blueberry pie and ice cream we drove north to the Temperance River and then heading inland for about 30 minutes on dirt roads to the put-in on Whitefish Lake.

A few folks are camping at the put-in in campers and a boat is tied up on shore. The morning is beautiful except that I am nauseated, weak, light-headed and breathing poorly.

My canoe is a 1963 Thompson and it’s the only canoe I have ever taken on a trip. My nephew borrowed a big green rowboat disguised as a canoe. It had a 40” beam, 3 seats, and a square stern. What a barge. As it turned out it was a pretty good boat for 3 guys who had never been in a canoe before. Maybe impossible to tip.

It’s a short paddle to the Elbow Lake portage which is a very easy 65 rod grassy sidewalk. Since this isn't the BWCA some folks actually portage boats and motors across here although I have been here a number of times over the years and have yet to even see anyone else. I think more folks park near the Cross River south of Finger Lake and then take the 30 rod portage over the Elbow.

The portage wore me out (sick, remember) and I had to rest almost 30 minutes before loading up to paddle down Elbow Lake. There are five acceptable campsites on Elbow and 3 or 4 unofficial sites. Two of the sites are much better than the others. The best one was taken (right on the elbow) and so we paddled north to the far end of the main lake to a nice site on a big rock. It took about an hour and a half to paddle here from the portage.

The boys are excited and my nephew wants to fish so I put up my tent got the bear tree ready for the food bag, hung the hammock, and fixed dinner after which I felt really lousy and went to bed in my jeans and four shirts and still had the chills. 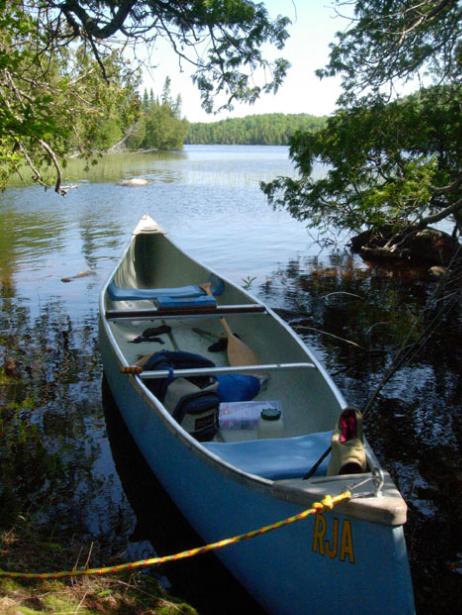