Trip Type: Paddling Canoe
Entry Date: 06/10/2007
Entry & Exit Point: Quetico
Number of Days: 7
Group Size: 2
Trip Introduction:
This was the first time my son Dusty and I have been to Quetico; a special thanks to Paul, a co-worker who has been traveling to this area with his family since his teenage years, and to those on this forum who so willingly share their experiences and information. Having this information, we felt quite prepared to enjoy a week of some Father-Son time there. This trip entered the planning stages about six months prior to actual departure. First compiling the list of stuff to bring, hashing over the weight vs. needs dilemma, it has been revised over and over. Then the route, and how make the most of seven days. Finally the shopping, since everything we already had for camping/canoing was not intended for portaging a trip like this, everything we had was replaced one by one with an ultra-light version. The travel up to Ely was about 560 miles from our home in S.E. Wisconsin. Just outside Ely, Minnesota we checked in with LaTourells Outfitters for an overnight bunk before heading out in the morning.
Day 1 of 7
Sunday, June 10, 2007      Prairie Portage – Agnes Lake At 6:30am we were greeted by Mindy LaTourell at the dock, she was happy to tow us the eight miles to Prairie Portage Ranger station at the Canadian Border. 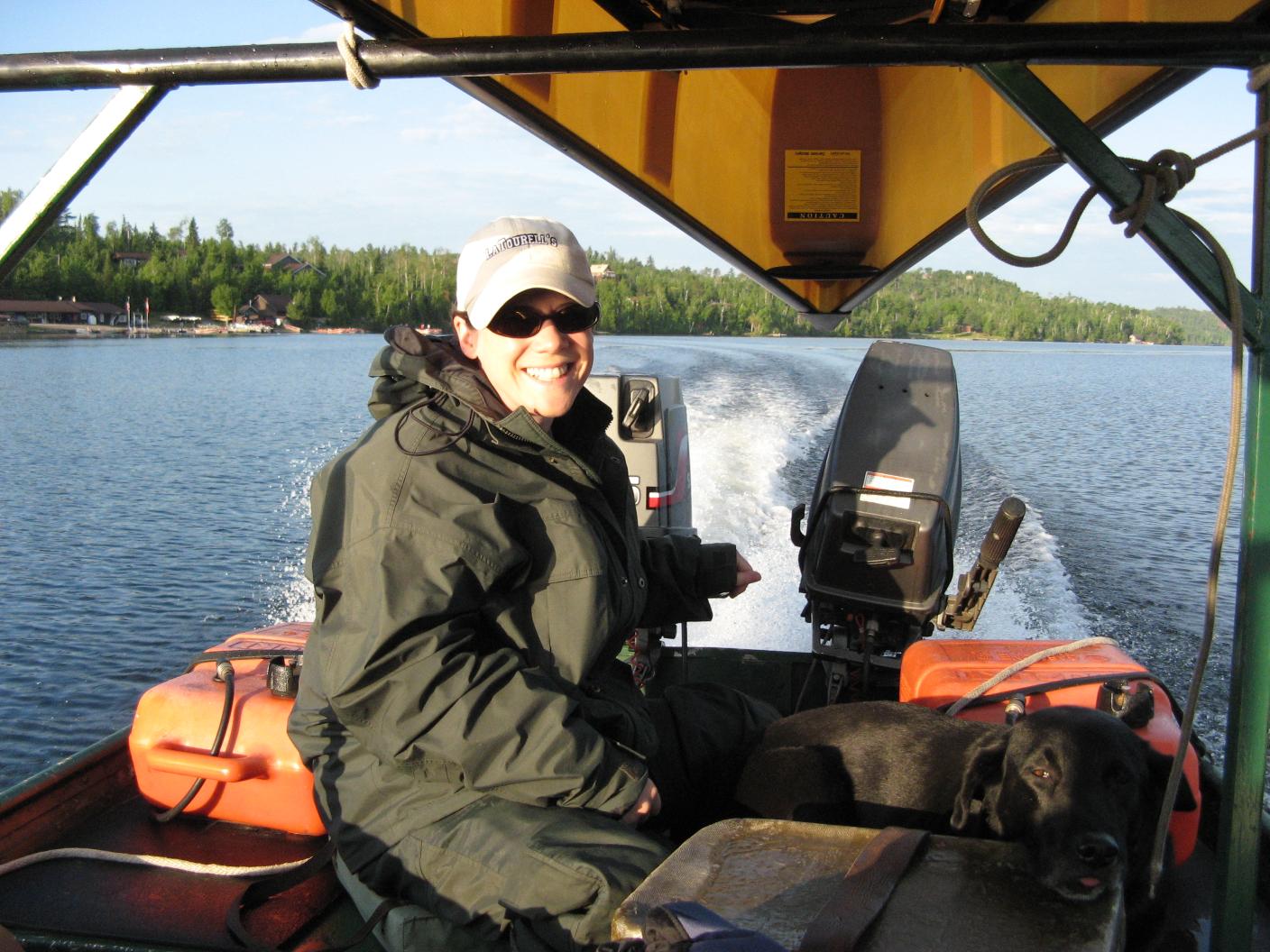 We arrived an hour before they opened, got camping/fishing fees taken care of, and paddles hit the water at 8:00 a.m. Ahead lay 300 square miles of wilderness area, and the plan for the day was simple; put a lot of miles between civilization and us. We paddled through Bayley Bay, Sunday Lake, Meadows Lake and into Agnes Lake. The three portages connecting the lakes, each nearly a half mile in length, were found to be a little rougher than expected. Large loose rocks and mud paved the way, mosquitoes were waiting for us, poison ivy was visible along the trails, and a few ticks hitched a ride.

We managed to single portage our canoe/gear on all three portages into Agnes Lake, a real accomplishment. We made good time, but not exactly the way to enjoy a trip like this. We will not do this all week. I carried the canoe, the heavy pack and fanny pack (55% of my body weight) through the first and third portages, and Dusty carried the other two packs (52% of his body weight). About ¾ the way through the 1st portage I came across a good rock to sit on for a short breather. Dusty, at age 18, is out to prove his manhood by carrying more weight that me at my “old age” of 42 was quick to complain that I was slowing him down, (an argument he warned me of for weeks). He insisted we switch loads on the 2nd portage. Not a smart move on his part to volunteer to take what would be a staggering 79% of his body weight on the longest portage of the day, even for an athlete. Why argue, we’ll see who is slowing whom down, I thought. Next portage, Dusty was true to his word carrying the load the whole way, non-stop. Very impressive!

A short paddle into Agnes Lake brought us to Louisa Falls at 2:00 p.m. Temperature was up to 80 degrees and we were ready for a well-deserved break. We stopped at the falls, an attractive place for cooling down and enjoying the scenery. 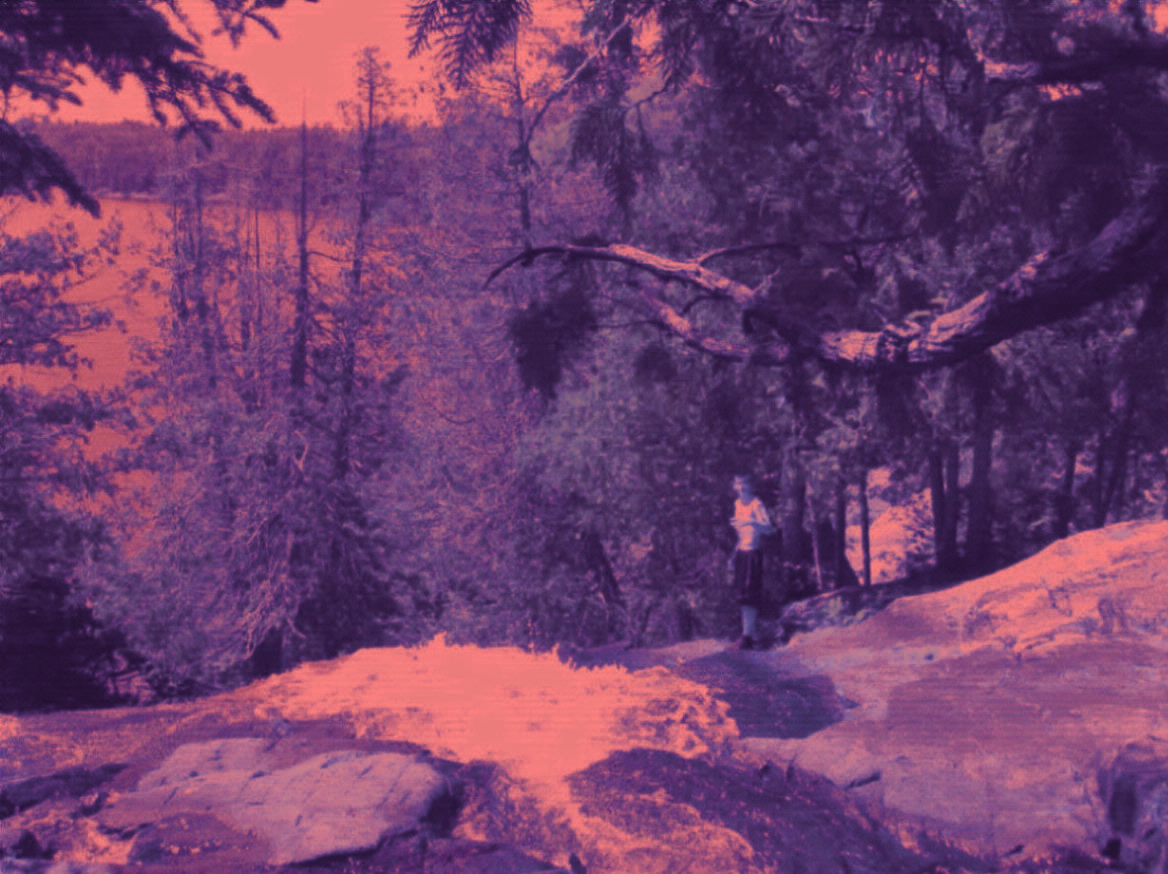 Half way down there is an inviting whirlpool type area that seems made to rejuvenate weary travelers; it was a refreshing way to spend an hour. 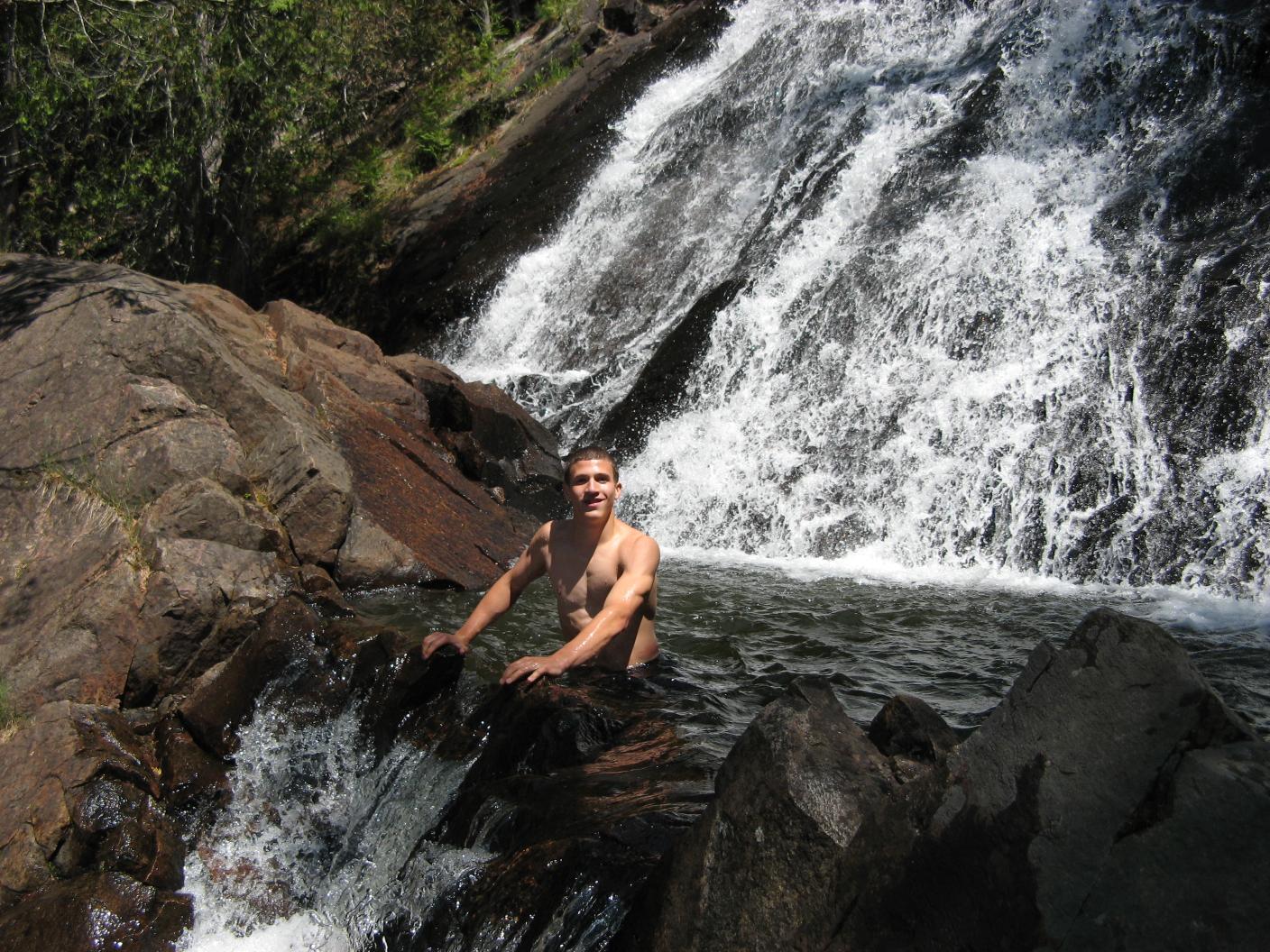 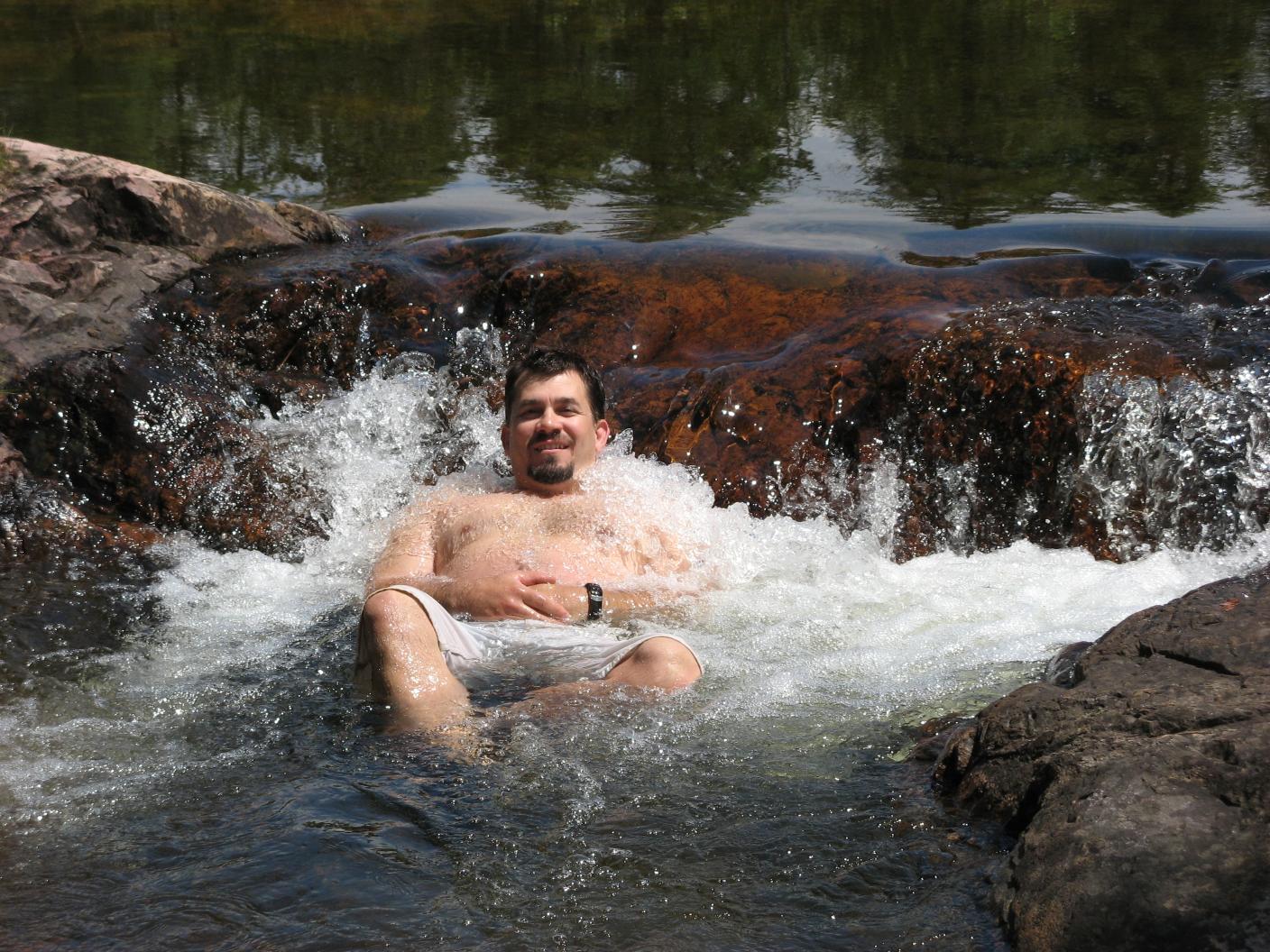 Feeling good about our achievement so far, we pushed on and stayed hydrated by refilling our water bottles and drinking straight from the crystal clear lake. About half way through Agnes Lake we came upon an island campsite, not officially on the map but discovered by Paul on an earlier trip I had it penciled in, thanks Paul. 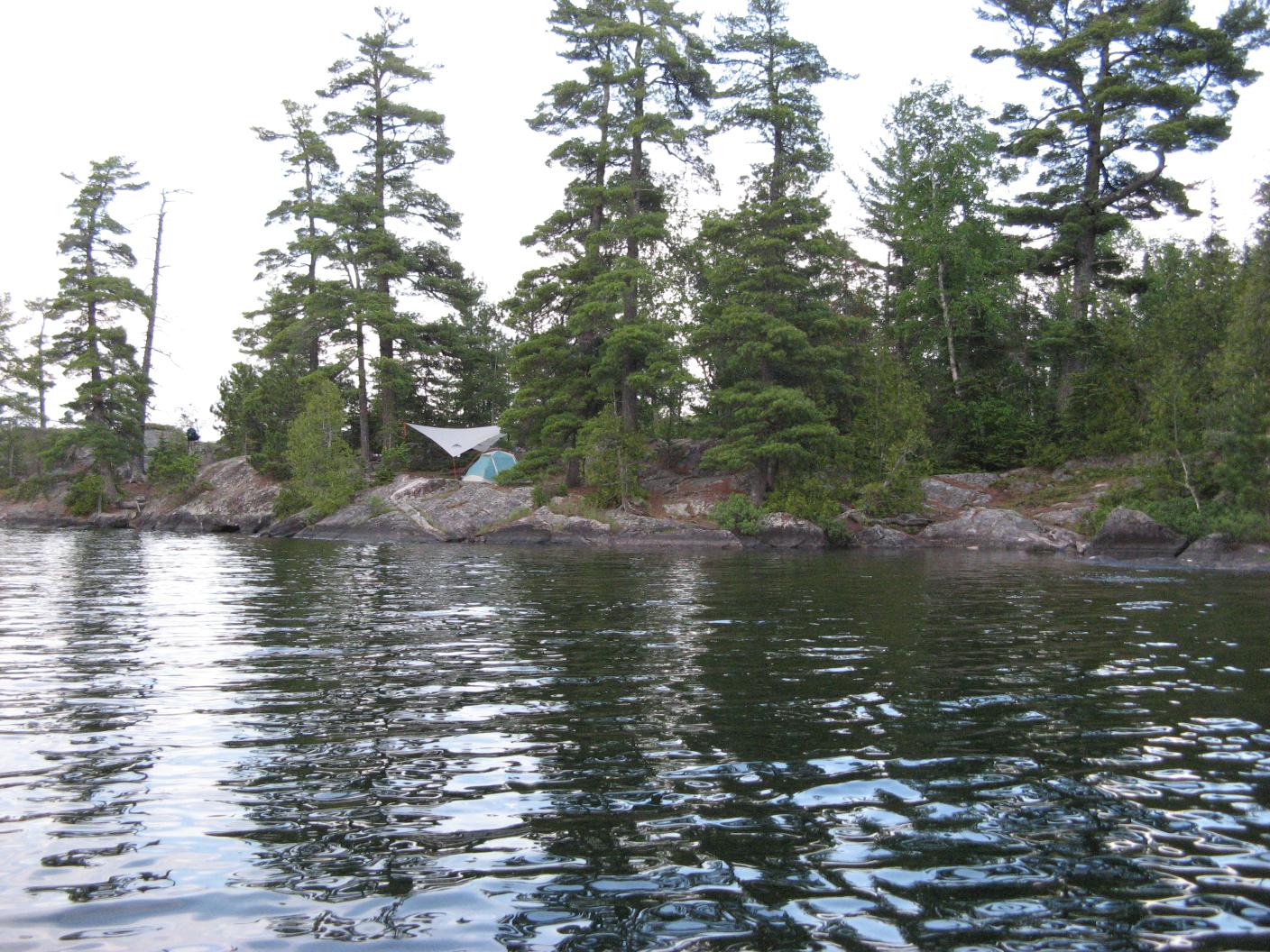 We set up camp, had dinner and enjoyed the view, 18 miles was now behind us. We enjoyed some unsuccessful fishing and a nice sunset. By this time, it’s after 10:00pm and still light, then a campfire and a lemonade cocktail before turning in for the night. It was a good day.