Trip Type: Snowshoeing
Entry Date: 02/15/2008
Entry & Exit Point: Clearwater Lake (EP L)
Number of Days: 3
Group Size: 2
Trip Introduction:
This is beginning to be a yearly tradition for me! I think it takes about that much time to forget how much work it is to winter camp.
Day 1 of 3
Friday, February 15, 2008

As I was loading up my truck, I saw Mike's front door light finally light up the street that runs between our homes. It sure is nice having someone so close share a common interest. Or at least someone who will give winter camping a shot. It sure isn't for everyone as our friends and co-workers would agree.

We started out around 6:30 and made it up to Duluth to pickup our tent and toboggans just after 10:00am when the Wintergreen shop at Fitgers opened. We were renting our gear from White Woods Outfitters who I met while attending the Winter Camping Symposium last fall. W.W.O. uses the shop for pickup and drop-offs it was nice and easy to get to.

We strapped our toboggans to the truck and off we went to the Gunflint trail. Although Mike has never canoed in the BWCA, he and his wife spent their honeymoon on Gunflint lake a few years ago and Mike seemed happy to finally be heading back up that way. We arrived at Clearwater lake at about 2:20-later than I wanted, but we still had a lot of daylight left.

After packing up the sleds and strapping on our shoes we headed across Clearwater lake and easily found the portage to Caribou lake. The portage has a couple of forks and I knew to stay to the left, but ended up getting on a trail which brought us past a couple campsites. The trail had been recently used and I thought the packed snow was the right way. It wasn't. Although the narrow path through the was woods was very pretty, the mistake cost us a lot of time and energy. It was nice to get back to the snow covered ice where the toboggans were hardly noticeable. 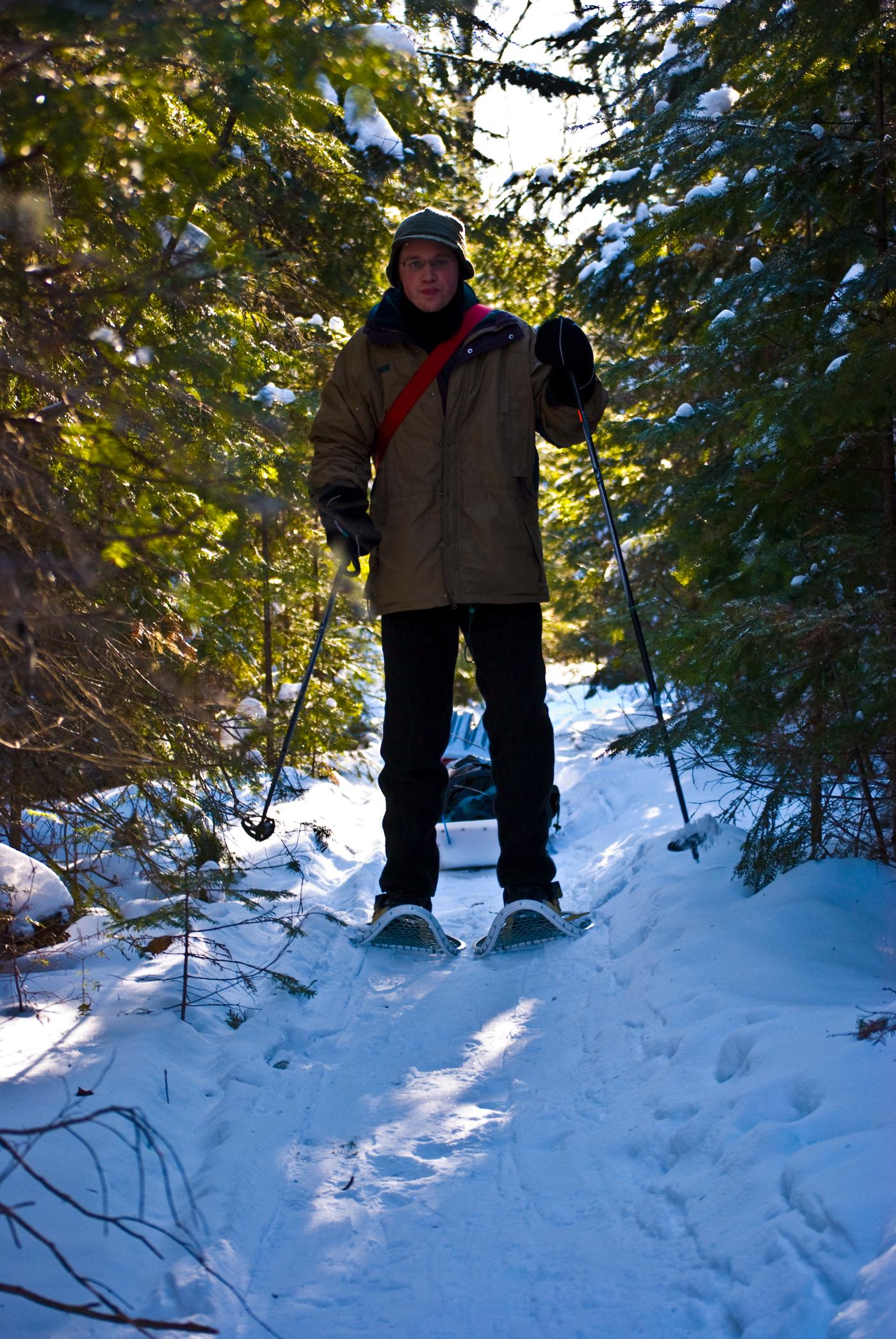 At about 5:00 we saw an open spot on Caribou lake which looked like a promising place to setup camp. Although the site was not listed on a map, I would guess that the place had seen a lot of use either from overflow camping or perhaps it was just an old out of commission site. Anyway it was perfect for us. We quickly pitched the tent, setup the stove and pipe then headed out to get some wood just as the last light of the day left us. 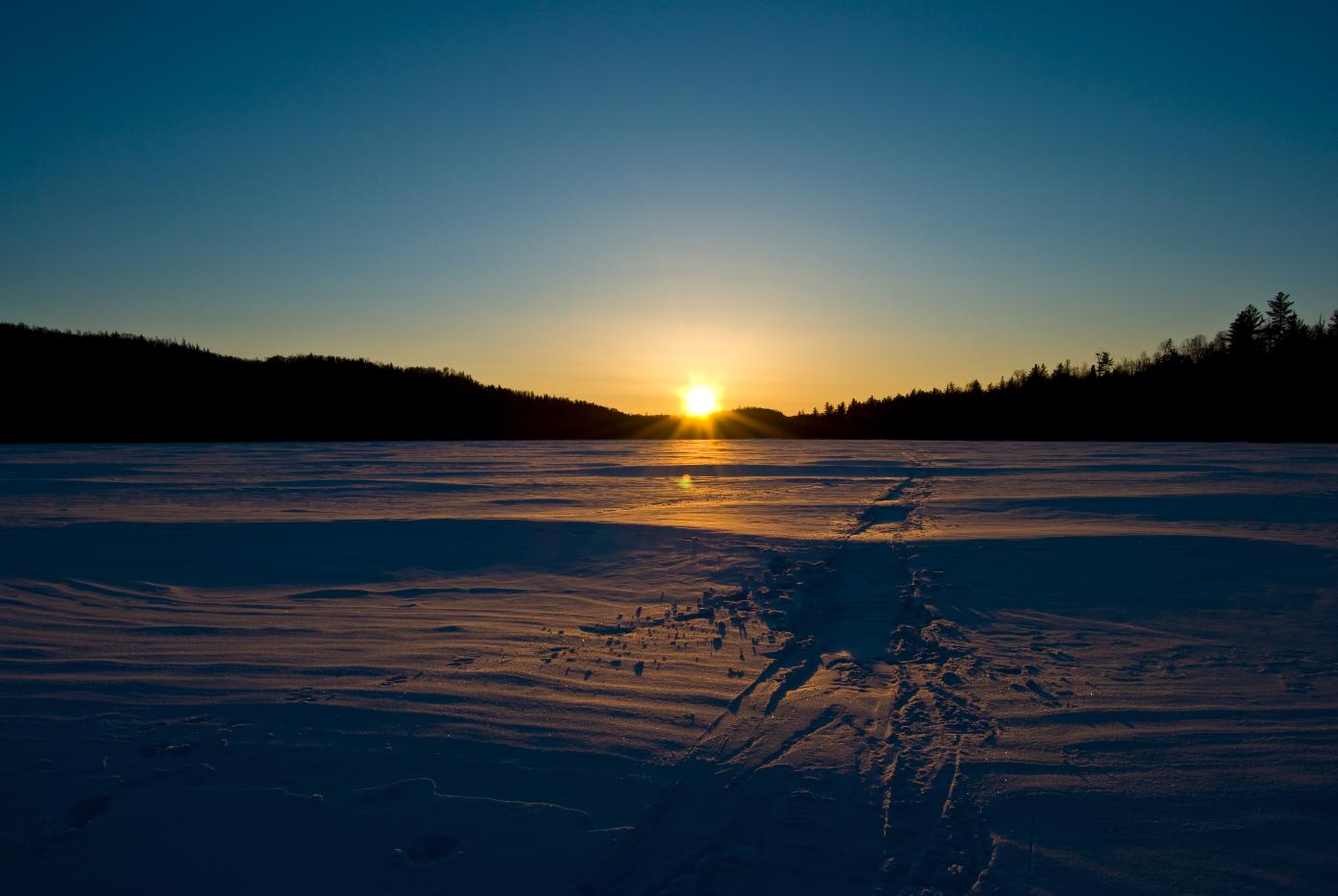 It was probably around 6:30 or 7:00 by the time we got the tent nice and warm. That was the first time either of us had used a hot tent setup and we both thought that putting it all together went pretty well.

Mike took off his boots to reveal some of the nastiest blisters I had ever seen. The entire front pad on both feet was one big blister. I guessed it was from having two socks on during the 3.5 mile trek in.

I left Mike in charge of cooking up the New York Strips. He cooked them right on the paper directly on the stove. It was something that looked strange but the steak tasted perfect like it was on a Weber.

I kept the fire going all night and had two logs left over just perfect! Well I suppose having enough fuel for breakfast would have been better but at least we didn't get cold. The temps for the day were just above zero.