Saturday started out great, partly sunny skies and the forecast was for mild temps maybe reaching into the twenties. We cooked up some tasty Egg Beaters and bacon which we rolled into tortillas. I had some coffee, Mike wished for some tea- next year I will add that to our menu! 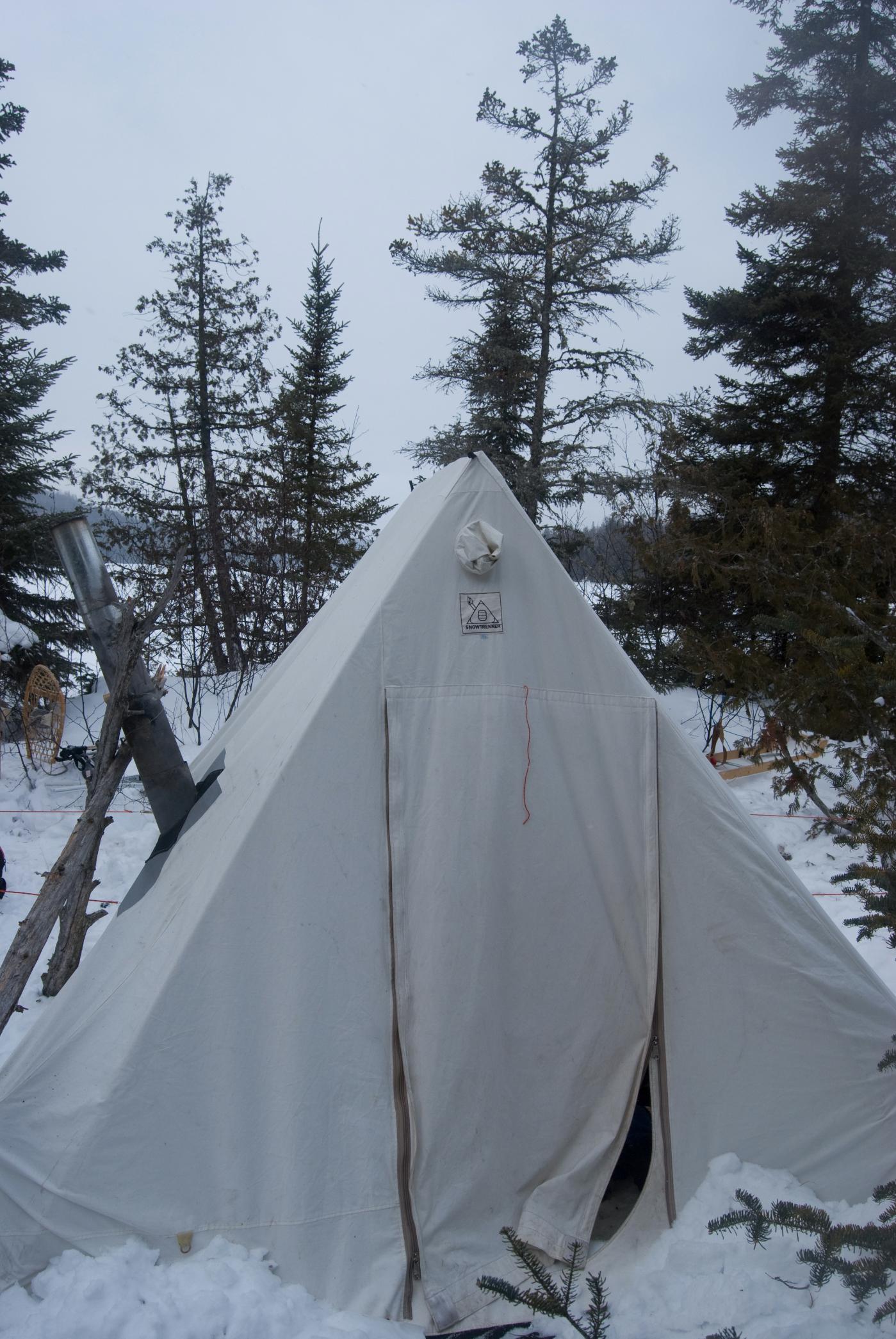 I asked Mike about his blisters and wondered if he thought he could make it to the falls and back plus out the next day. After some deliberation he decided to stay and tend to camp. I had mentioned that I wouldn't think any less of him for staying back, I knew how painful those blisters must have been. Later he said that comment helped him decide. :)

I packed up some lunch, filled my water bottle and set out across the rest of Caribou Lake and into Little Caribou lake. I found the very nice campsite which was our goal for the previous day. I was a very nice site, but sat up high and was exposed to the cold wind. I was happy with the site we decided on the night before. In addition to the exposure, it would have been rather tough to pull our gear up to the top of the site. I managed to set the timer on the camera and get into the shot even with snowshoes on! 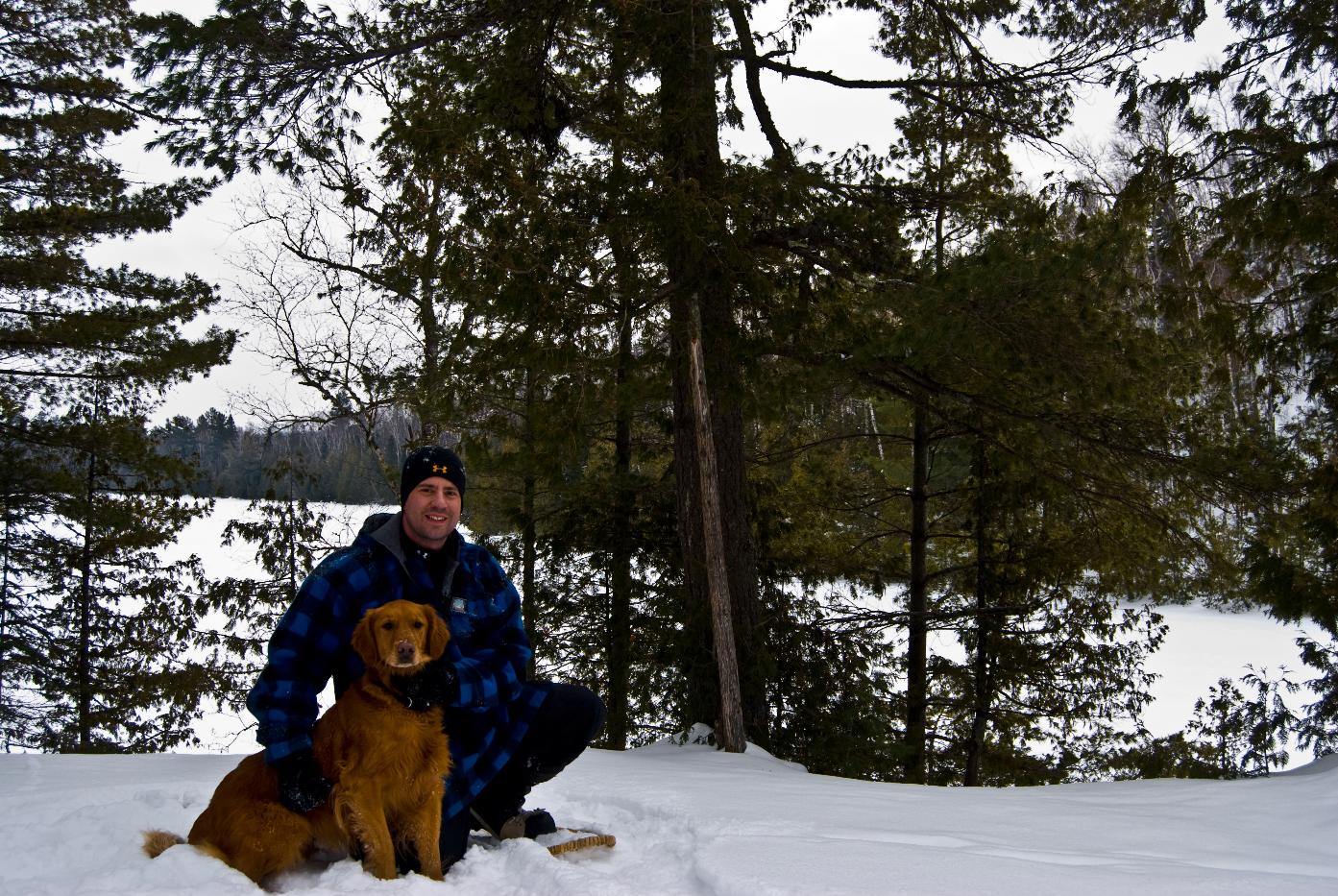 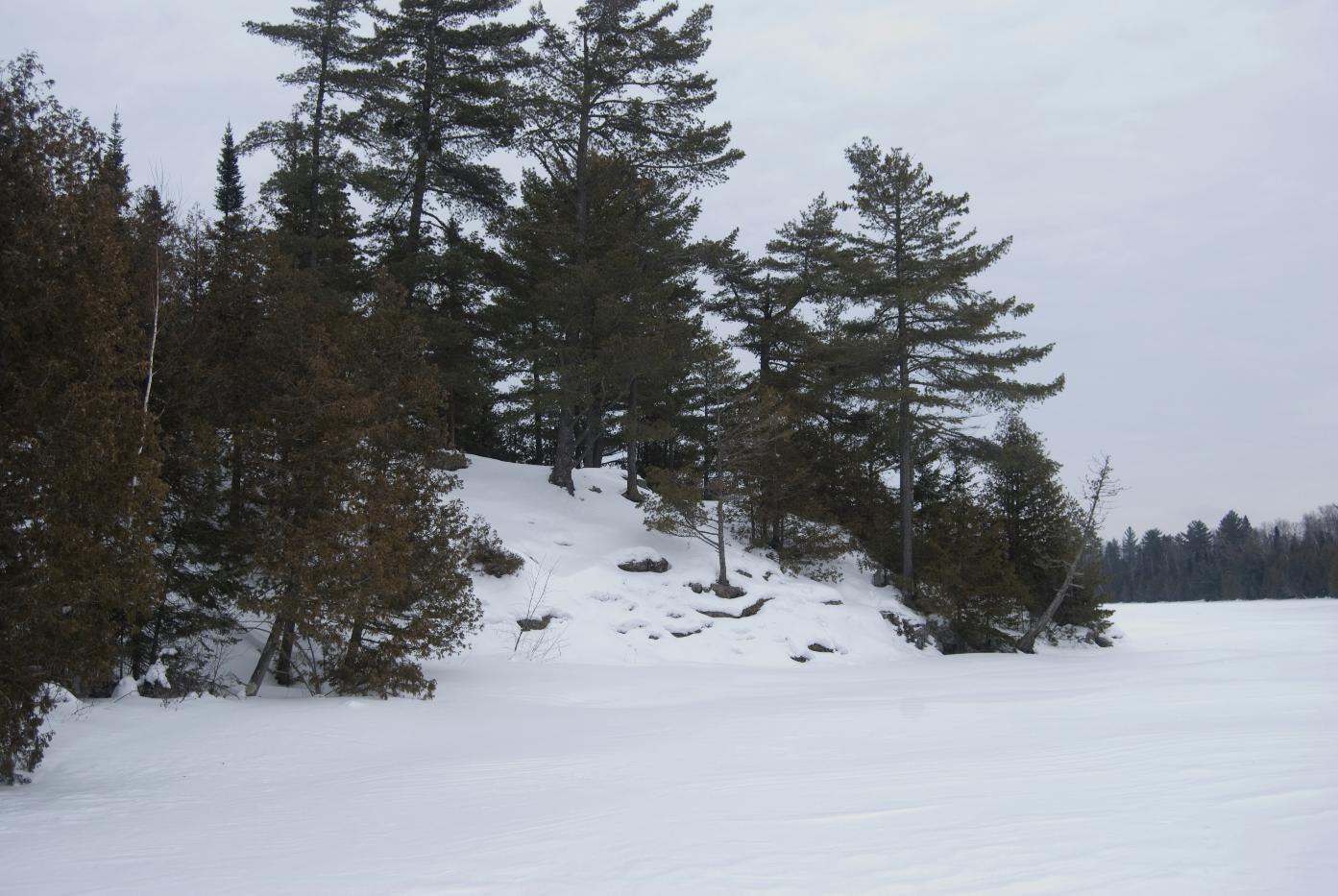 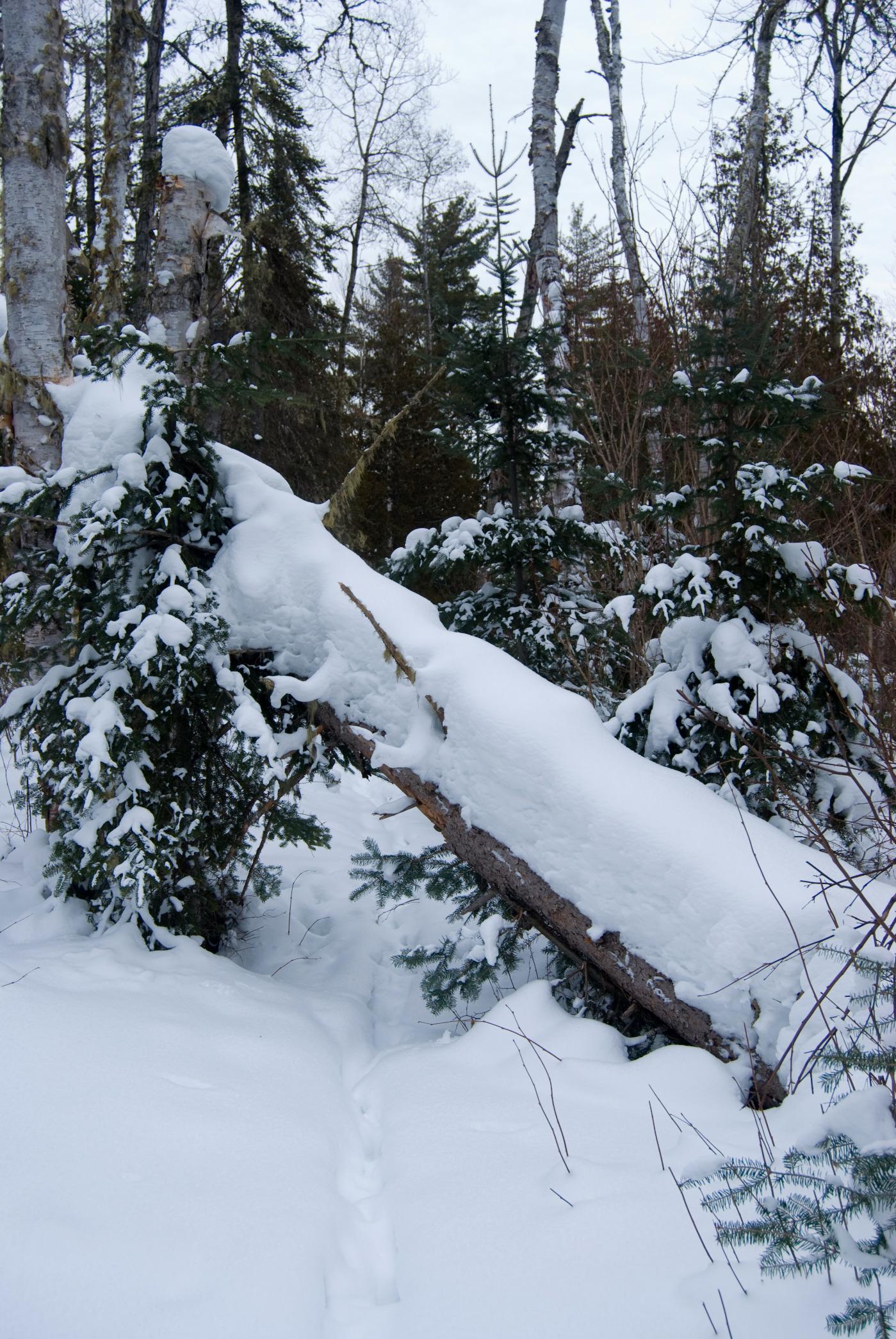 I noticed a lot of yellow snow as I left Little Caribou, and followed only wolf tracks across the portage. The short portage to Pine Lake was quiet and warm without the wind. The still flowing river gave the appearance of spring like weather although it had been bitterly cold just a couple days before. I stayed clear of any thin ice where the river spilled into the lake and found more tracks which lead into the woods on the south side of the river. Other than those tracks it was difficult to find the path in the deep snow and I am sure I left whatever trail there was many times. If someone were to follow my tracks in the future they would surely think I was drunk. I was happy to be wearing large traditional snowshoes through the deep fluffy snow. 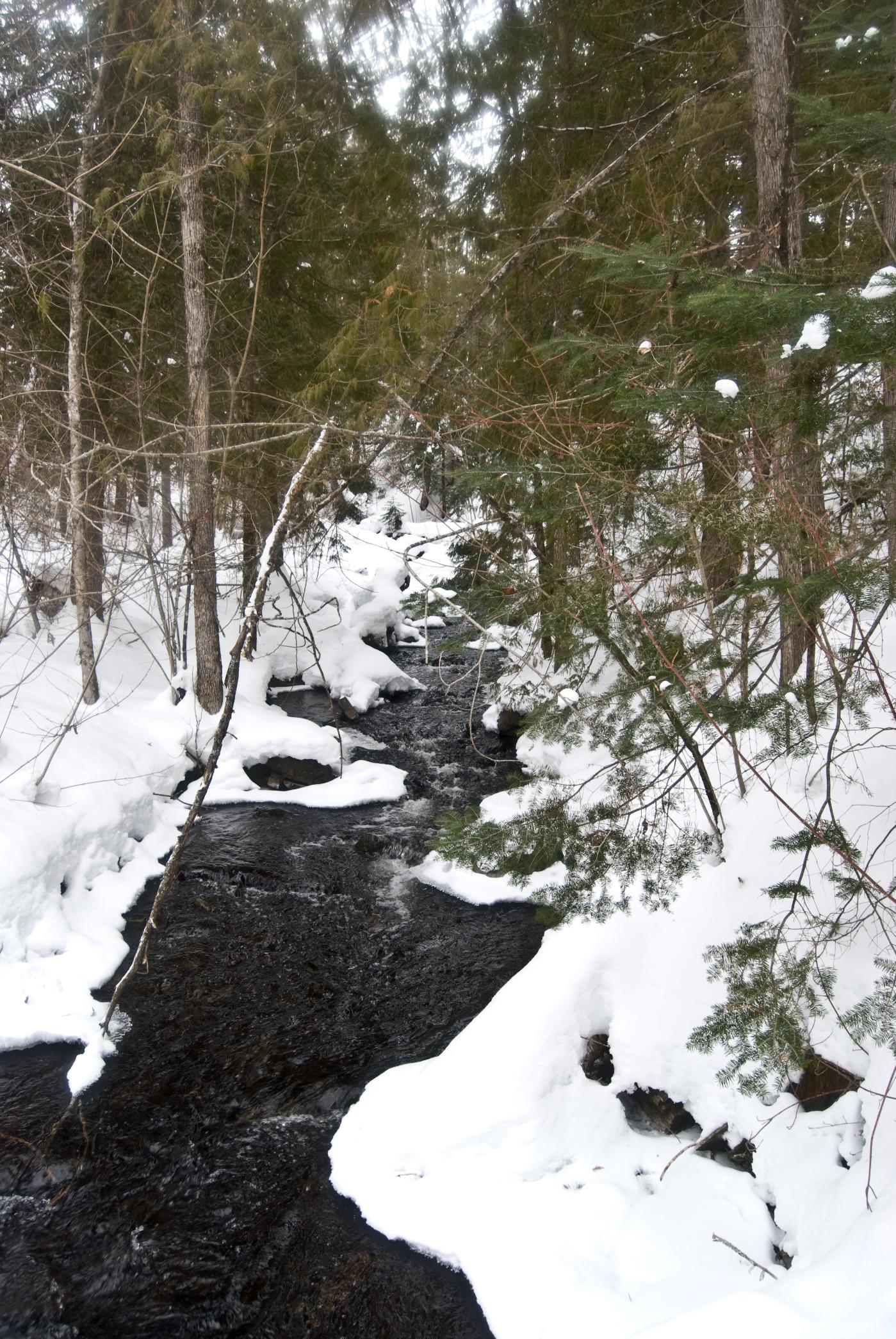 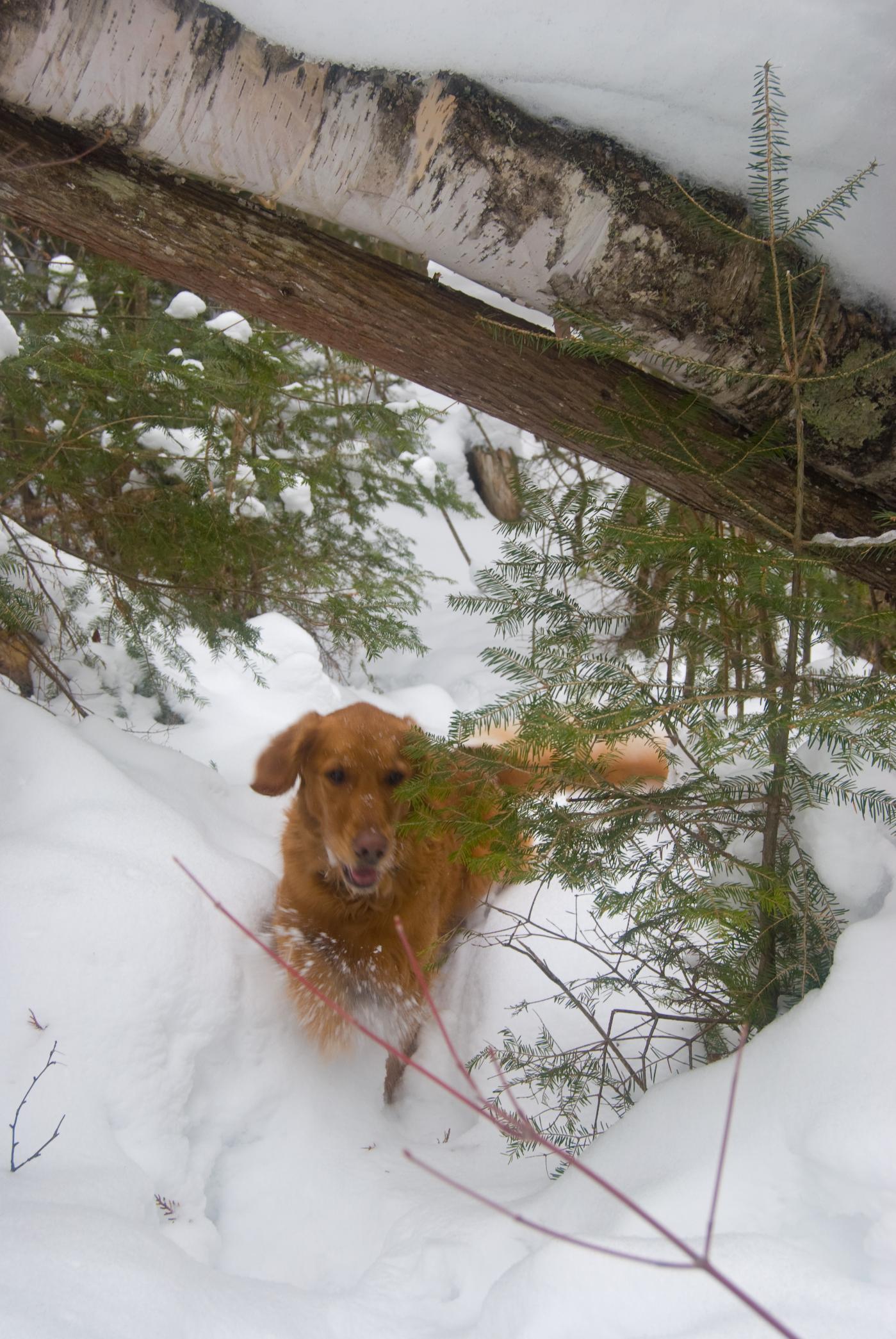 Eventually, I did find one set of falls and stopped to take a couple pictures. I was tired from the trek in and decided that I should keep moving otherwise I would sit there for the rest of the day. Although the falls were frozen solid I could hear a lot of water behind the ice. I thought that was the best part of the falls. 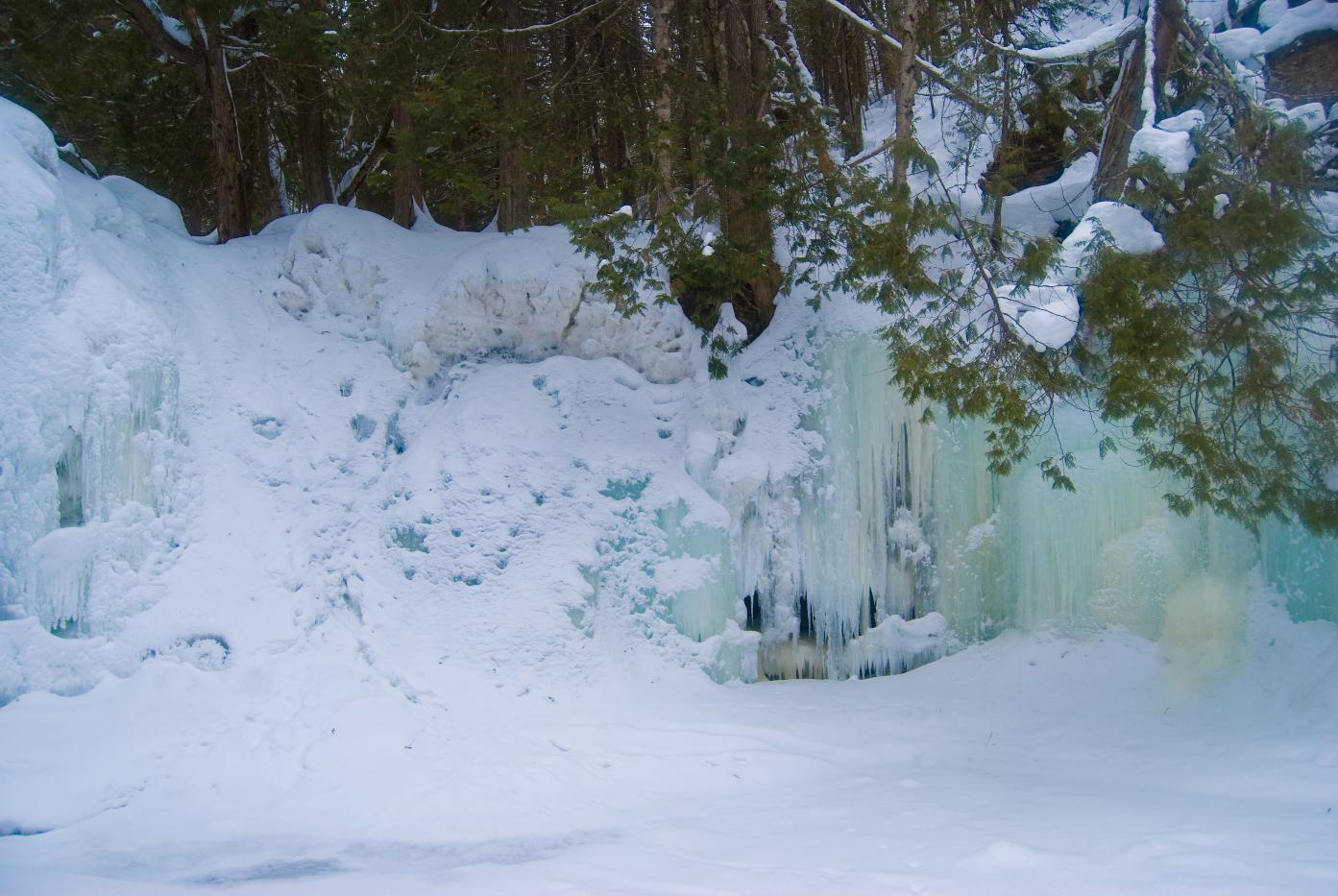 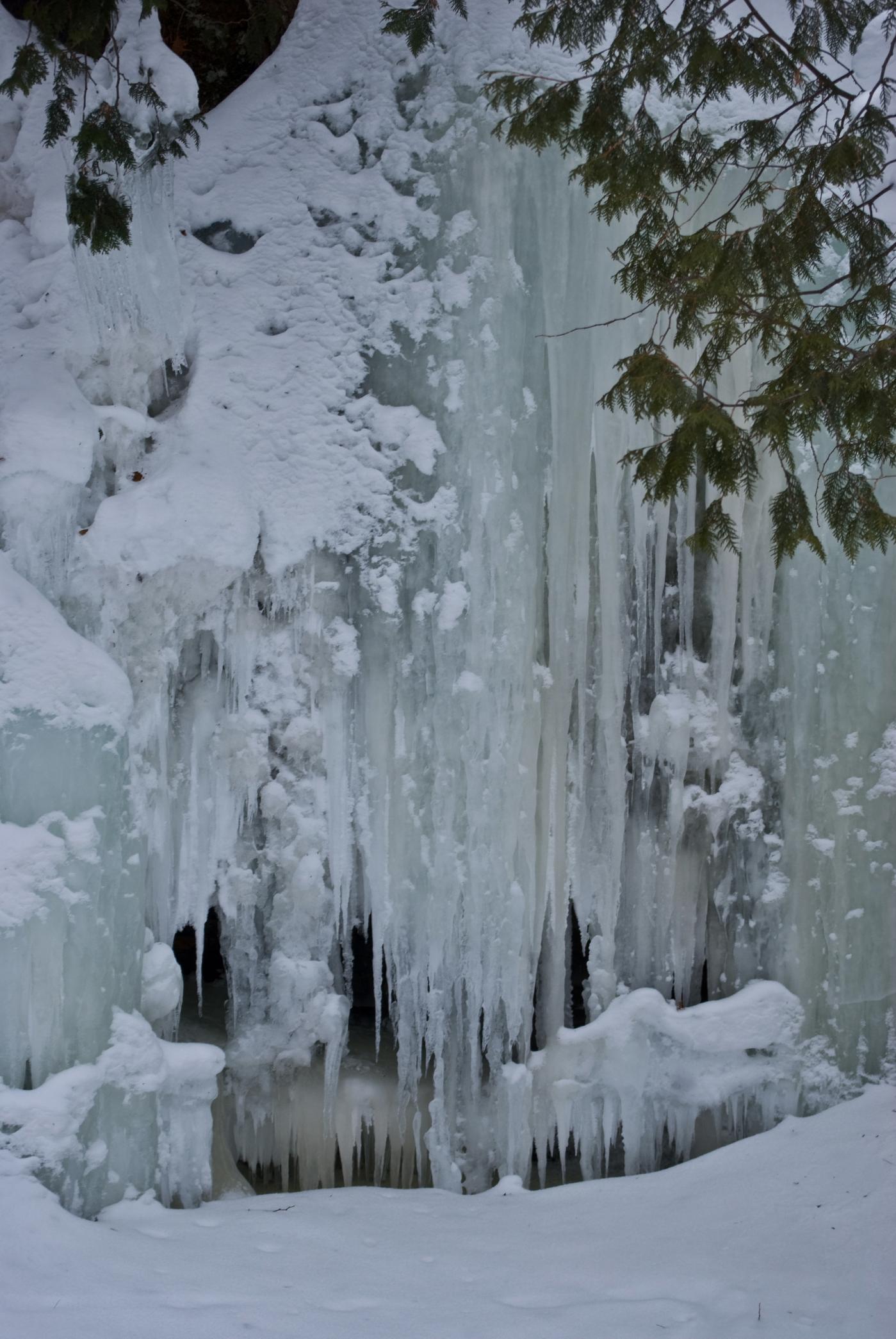 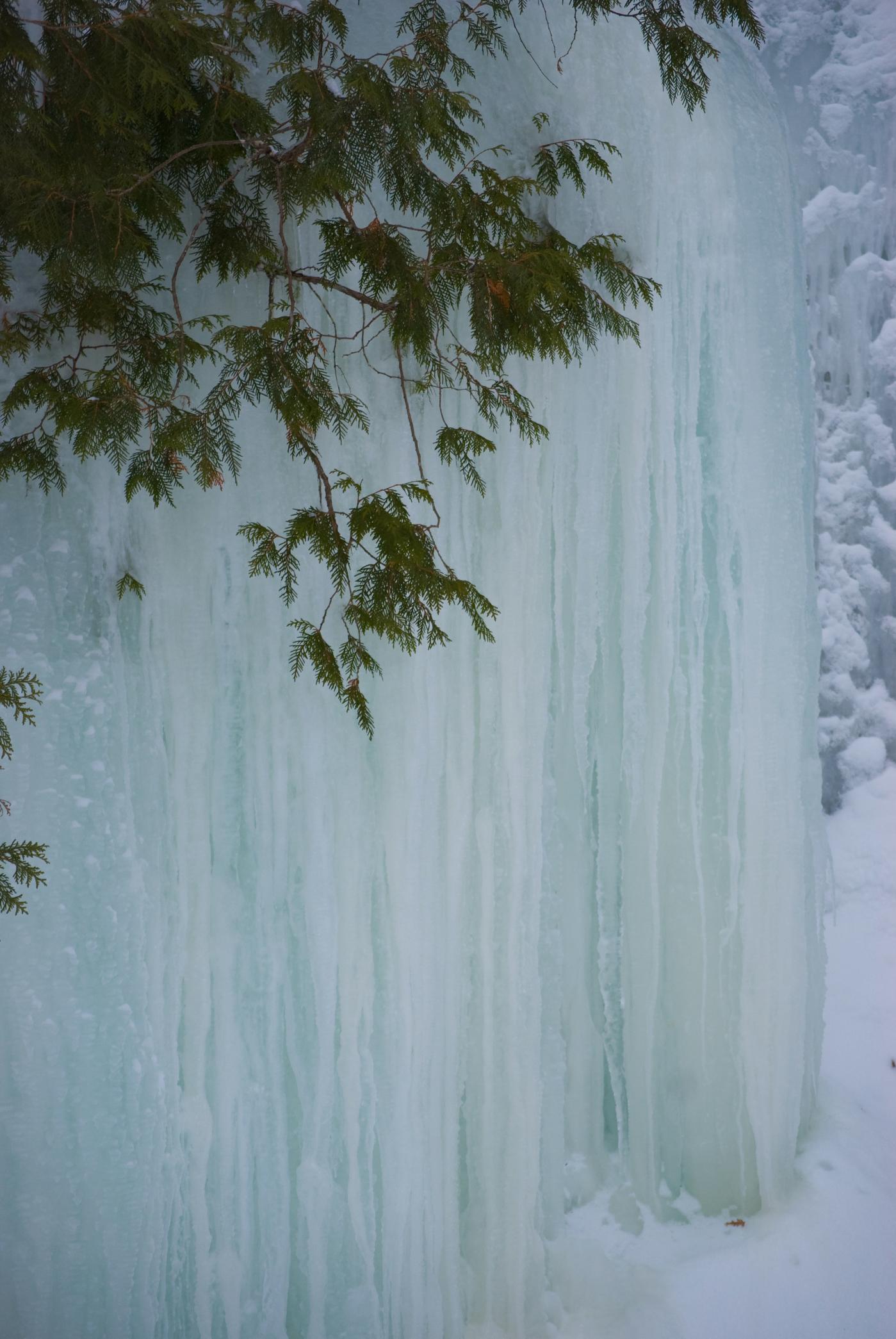 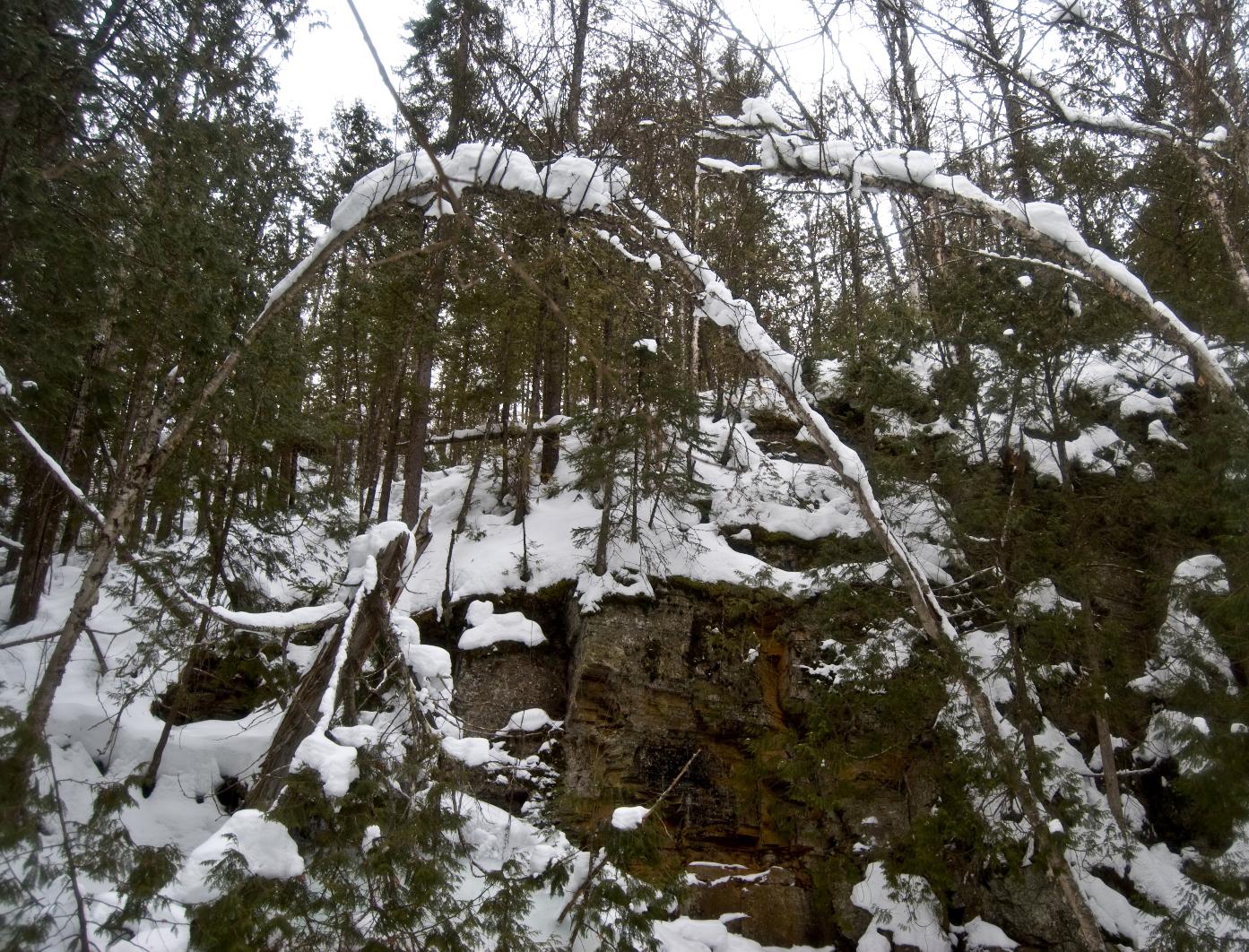 I still had lunch to eat but thought I should get out of the woods put a little distance between me and the falls before I ate. I made it back to the campsite on Little Caribou where I found a flat rock just off the lake and out of the wind eat my bagel and summer sausage. It provided a great view of the cliffs which surround the lake.

By the time I made it back to our camp, I was dog tired. I knew this because Annie (my dog) and I both dove into the warm tent and took a nice nap. That trip to the falls and back took 3.5 hours and covered just about 6 miles according to my GPS. I had a great sense of accomplishment for reaching the falls that day. 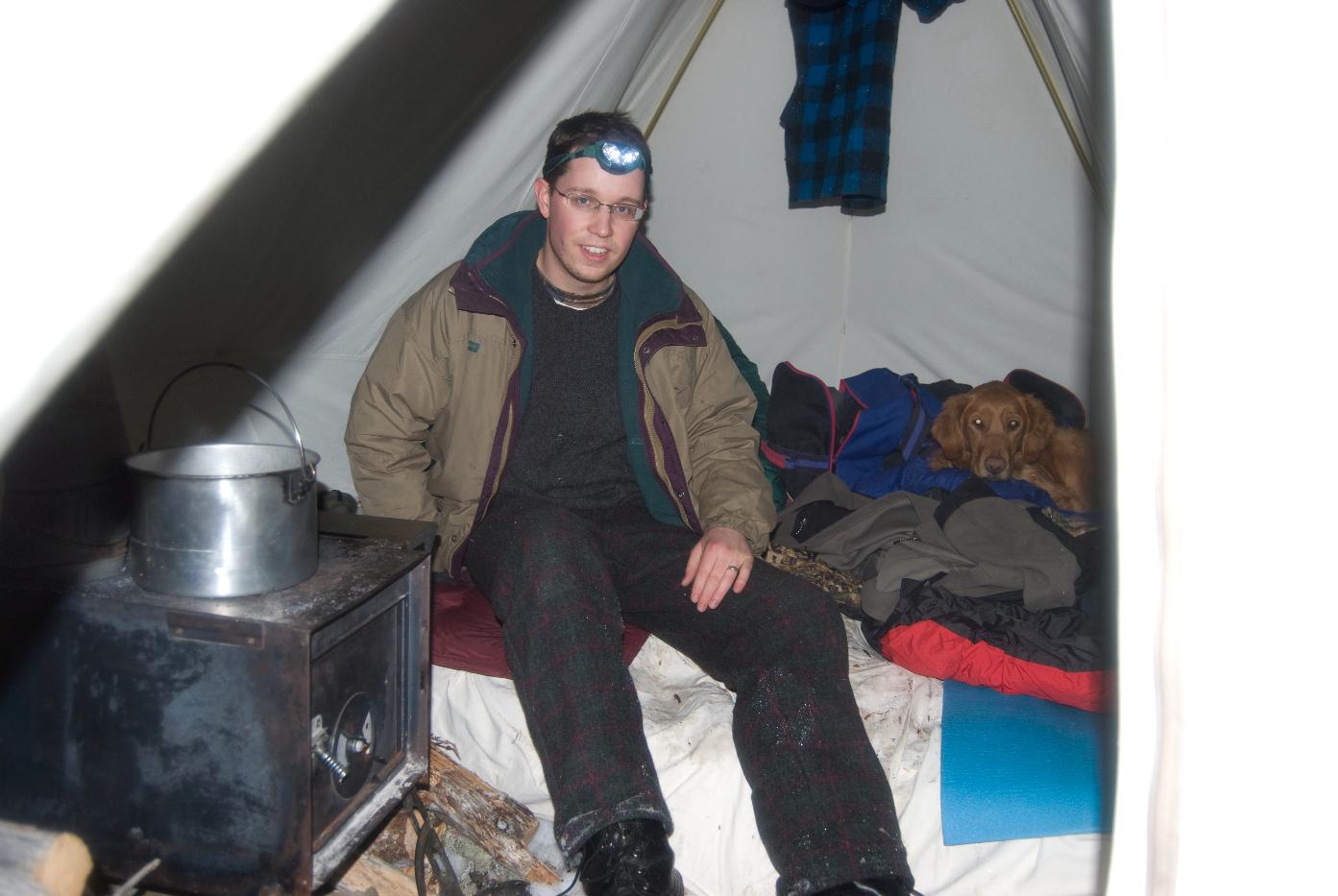 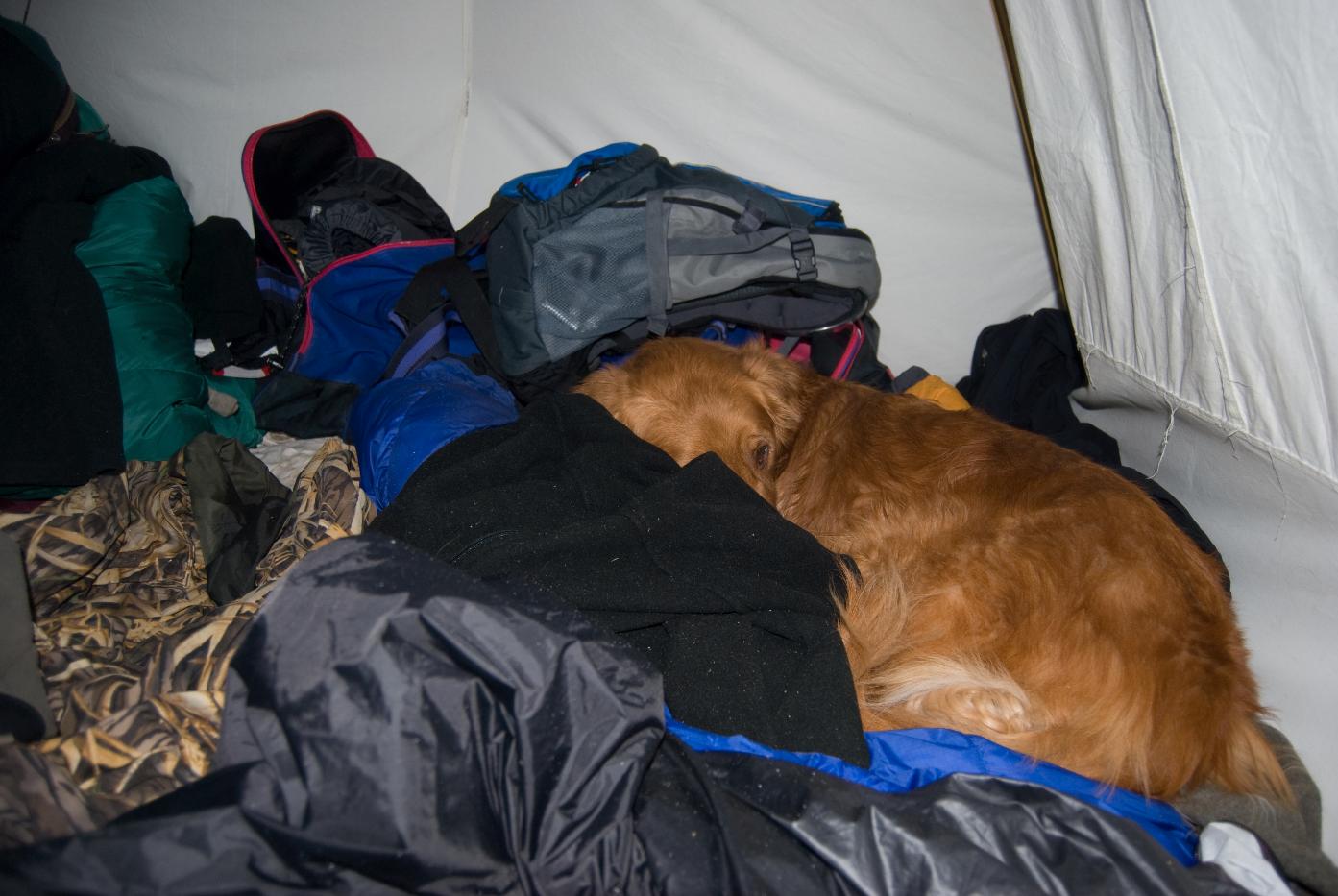 Mike and I gathered more firewood cleaned up the tent and started preparing dinner. We cooked B-Dub Pizzas on the stove and they were great! Talked a lot played some cribbage, had a few sips of the "Master Hunter", stoked up the stove and turned in around 10:30 or so. 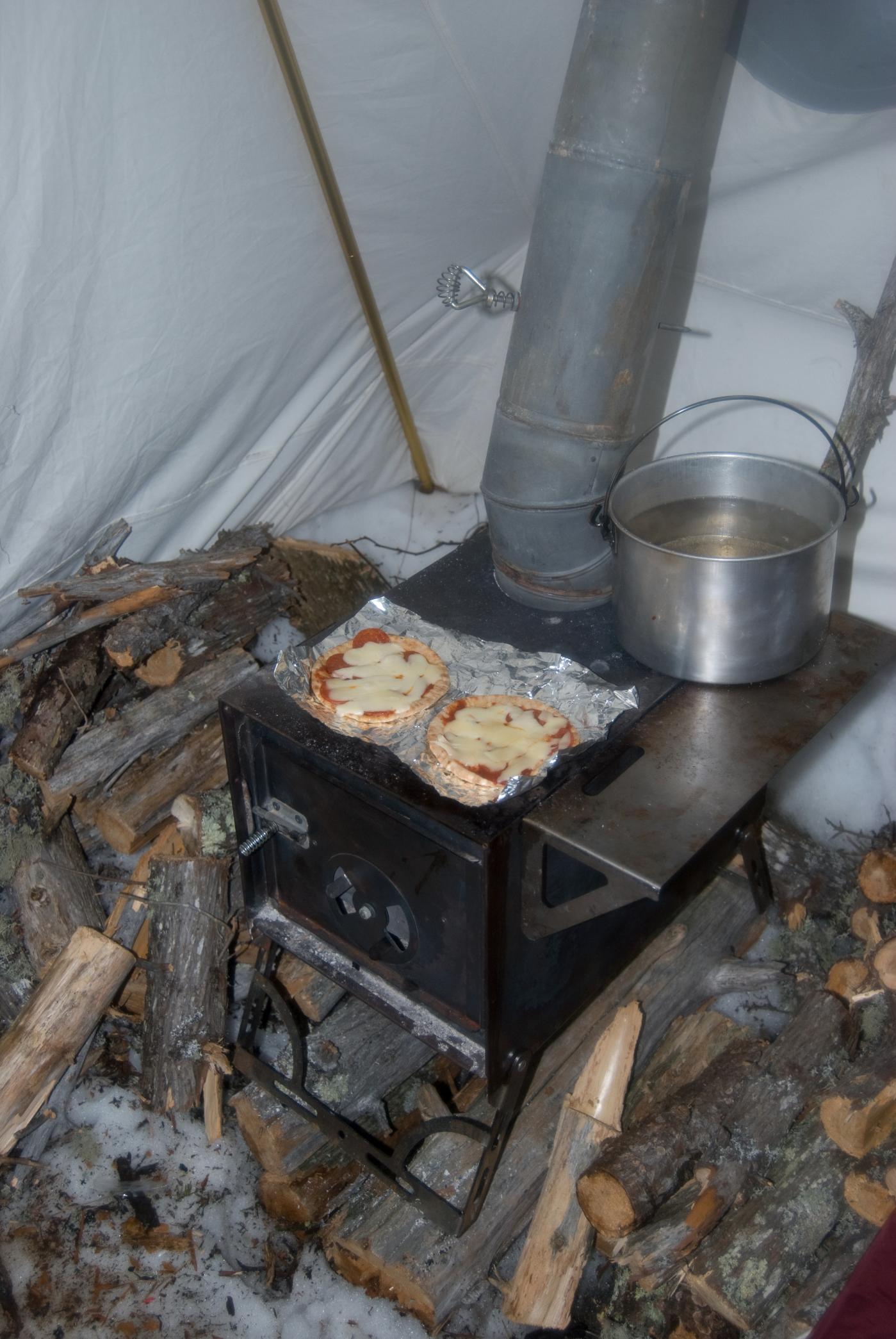