Trip Type: Paddling Canoe
Entry Date: 07/02/2013
Entry & Exit Point: Quetico
Number of Days: 11
Group Size: 2
Trip Introduction:
20 years has gone by since I paddled the waters of Poohbah Lake. As I was pouring over my mountain of maps last winter deciding on this year’s destination, my mind kept drifting back to Poohbah. Are the fish still as plentiful as I remember? Is that 5 star campsite still as beautiful as I picture it in my mind? Is the water still as crystal clear as it was so many years ago? After long consideration, I decided I needed to find the answers to these questions. I discussed this with my long time tripping partner Jody and he agreed that this would be a great place to test our fishing and backwoods skill. I contacted Zup’s Resort on Lac La Croix to set up our tow to Twin Falls for our July 5th entry into Quetico. We fished Lac La Croix for three days before our Quetico adventure. The following is a day to day log of this wonderful adventure.
Discuss Trip: View Discussion Thread (34 messages)
Day 1 of 11
Tuesday, July 02, 2013

The rumble of the train lumbering through Orr, MN woke me out of a deep sleep on this long awaited day. After a strenuous drive the day before, the bed at Norm’s Motel was a comfortable switch from the seats in my heavily loaded pick-up truck that was awaiting us in the parking lot. I lay in bed watching for any movement of my tripping partner Jody, who was sawing logs in the other bed. The train didn’t seem to interfere with his sleep!

The sun was rising, creating a beautiful contrast between the red sky and the blue water of Pelican Lake and I couldn’t wait to start our adventure. After hot showers, we were out the door and into Patten’s Café for a hearty breakfast of flapjacks and eggs.

We were anxious to hit the road for our ½ hour drive up Highway 24 to Scotts Marina on Crane Lake. We were to meet our tow boat operator Melanie for a 7:30 am pick up. Our final destination for the day was Zup’s Resort on Lac La Croix. Jody and I both agreed we would fish for three days there before we started our Quetico adventure to Poohbah Lake. As we arrived at Crane Lake, the little town was just starting to stir. A few people were milling around down at the docks preparing for whatever adventures awaited them. We backed the truck up and unloaded our gear—we always pack heavy, and this trip was no exception. I had two packs—a Paul Bunyan Duluth pack and a Frost River Bushcrafter that was busting at the seams, while Jody had his #4 Deluxe Duluth pack also stuffed to the max! Our Kondos insulated food pack was also filled to the brim—along with 10 fishing outfits and our 20 pound tackle bag sitting atop our packs! The last thing to add to our mountain of gear was my Souris River Quetico 18.5 foot canoe. A big canoe for a big load!

As we finished unloading, another group pulled up to unload their minivan. When they got out, a tall gentleman dressed in Patagonia from head to toe asked if we were also going to Zup’s. I assured him we were and that they were in the right spot. The group of four, including his wife, son and family friend were making their second trip into Quetico, entering at Black Robe on their way to Darky and Argo. We hoped that they were prepared for the journey, as they didn’t seem to have some of the necessary gear that Jody and I consistently bring. They remarked that they hoped the bugs weren’t going to be too bad, because they ended up using a whole bottle of bug spray already—plus a few choice four letter words! We were hoping that the boy had some long pants and shirts for the portages or he was in for one miserable day! Melanie soon arrived and we loaded our gear and the other group’s, as they were swatting flies, mosquitoes, and other insects. Our first stop was Canadian customs on Sand Point Lake just north of Crane Lake. Customs was busy that morning! We were the third boat in line. The process went quickly though. The officials asked the basic questions and we were on our way in no time. Melanie fired up the motor and we headed back toward Crane Lake en route to Lac La Croix. Our route took us through Crane to Little Vermilion Lake and finally into narrow, windy Loon River. Melanie expertly maneuvered the boat like a Nascar driver, taking each turn and straightaway with precision. The river was very wild and scenic. We watched for wildlife but today we only saw a few eagles sailing high in the blue cloudless sky. There were places in this river that were barely wide enough to accommodate the large tow boat. Melanie slowed the boat down to a crawl, raised the motor and skillfully dodged all the massive boulders that rested on the river bed. In no time we were at the mechanical portage a Loon Falls. We jumped out and helped steady the boat as Melanie waited for the steel cart that would carry the boat across to Little Loon Lake. The mechanical portage was a cable system that pulls the cart up a “miniature railroad track”. It’s operated by a man in a building that houses the engine that runs the system. In a few minutes, we hopped into the boat and were on our way to the next mechanical portage. On the other side of Beatty Portage was our final destination of Lac La Croix and Zup’s Resort! It sits on an island on the east end of this massive lake. Palisades adorn many areas of this lake and photo ops are aplenty! As we pulled up, owner Mark Zup was there to greet us. The other group stayed on the boat, heading straight to their portage. Hoped all went well for them!

Mark tells us that our cabin is a mile and a half away from the main lodge, which suits us just fine. Jody and I relaxed while the staff prepared our boat before following them to our Northwoods piece of paradise. The secluded bay looked like it was full of Northerns. The cabin was amazing with two nice bedrooms, large kitchen and dining area, and a great living room with wall to floor windows facing the lake. After unpacking and getting settled, we headed back to the main lodge to go over some maps with Mark. We took the box lunches that were offered rather than dining in and headed to an area northwest of the lodge where fishing had been pretty good the last week. With two dozen minnows and crawlers, we boated to the area Mark had pinpointed on the maps. There was a slight breeze that made for perfect drift fishing. We baited our ½ ounce jigs with a minnow and sent it to the bottom and began our slow steady drift. In a couple of minutes I felt the familiar “tap tap” on my line and set the hook. In a short time a nice three pound Smallmouth was in the boat. A few seconds later, Jody also had a nice Bass on his rod. This area produced fish after fish—a mixed bag of Bass and Northerns. We caught at least one fish on every pass. I’m a Walleye guy, but had a great time battling these hard fighting fish.

The rest of the day yielded those same results. Every spot that Mark suggested, we caught fish! No Walleyes, but lots of nice Northerns and Bass. We would drift for awhile, then spend time casting shorelines with equal success. The largest Northerns were in the 6 – 8 pound class. The Bass were all 1 ½ pound to 3 pounds. By the time we went in for our 6:00 p.m. dinner. We had caught about twenty Bass and the same number on Northerns. No monsters that day, but still a hell of a lot of fun! Dinner consisted of Prime Rib, potatoes, green beans and a salad—these guys put on a heck of a spread! We never went hungry here! After dinner, Jody and I each had a beer and chatted with Mark about the day’s fishing. His wife Kathy was a delight. We headed back to the cabin to get some rest before another day of fishing! 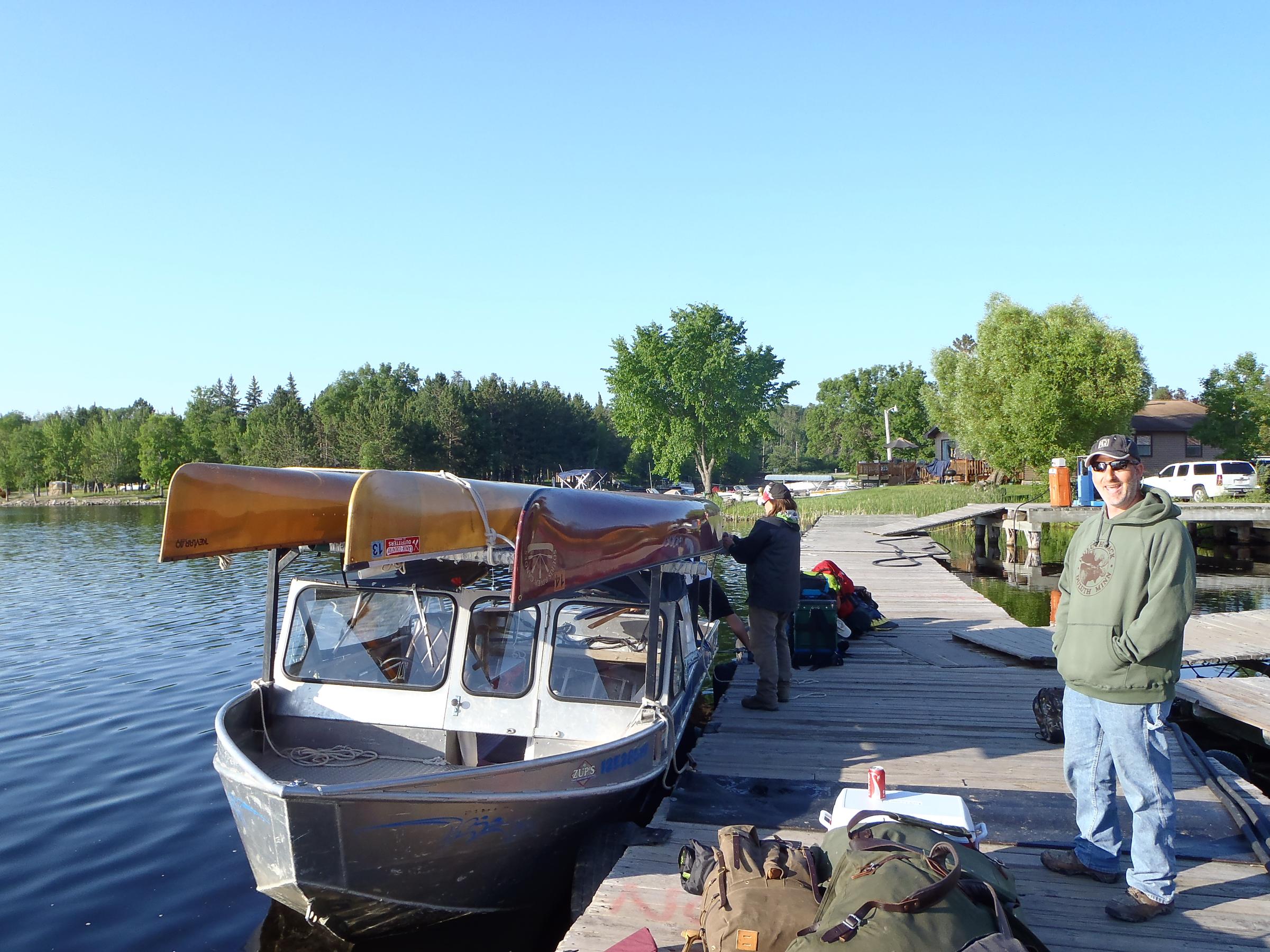 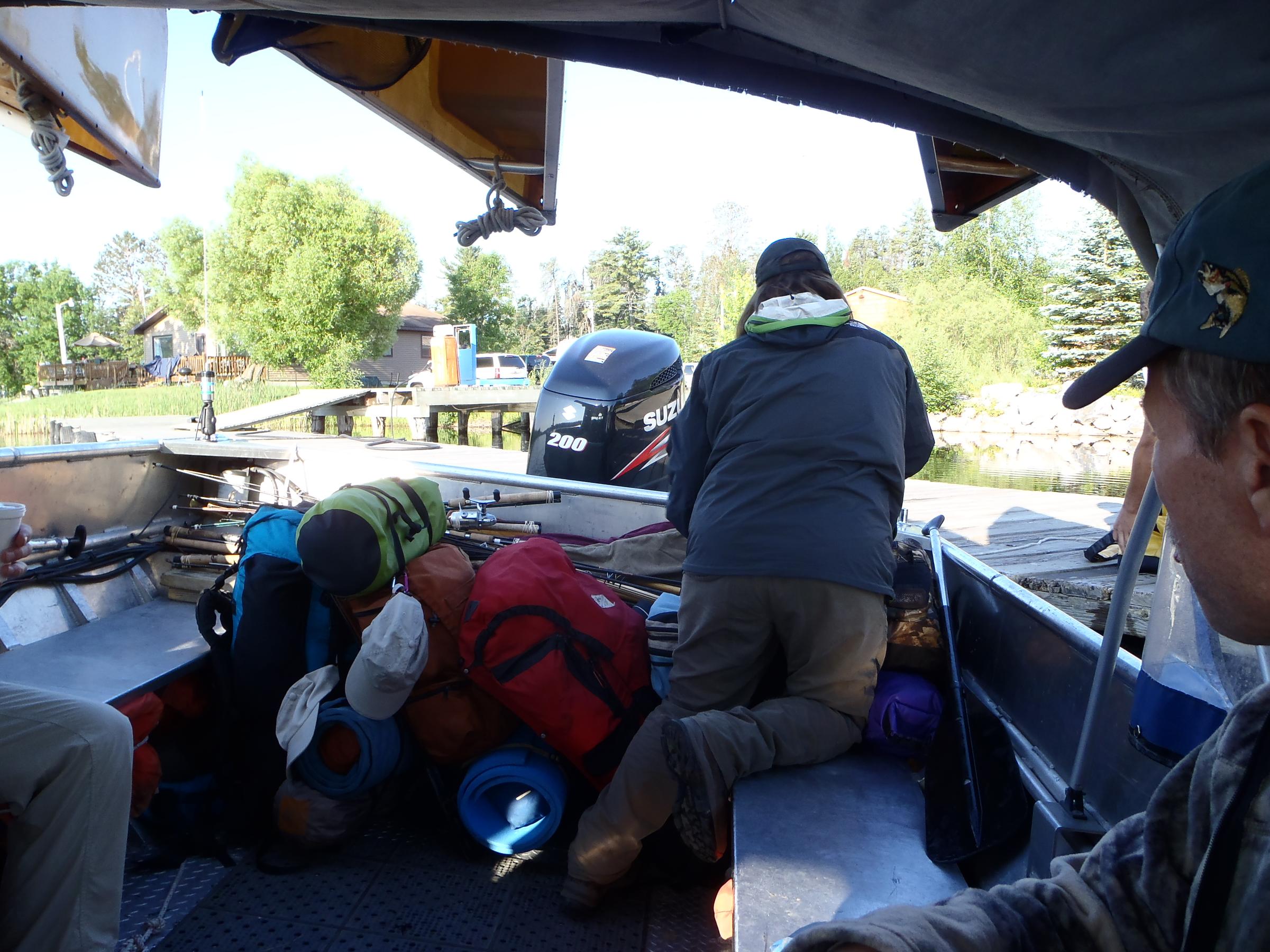 Melonie ready to head out 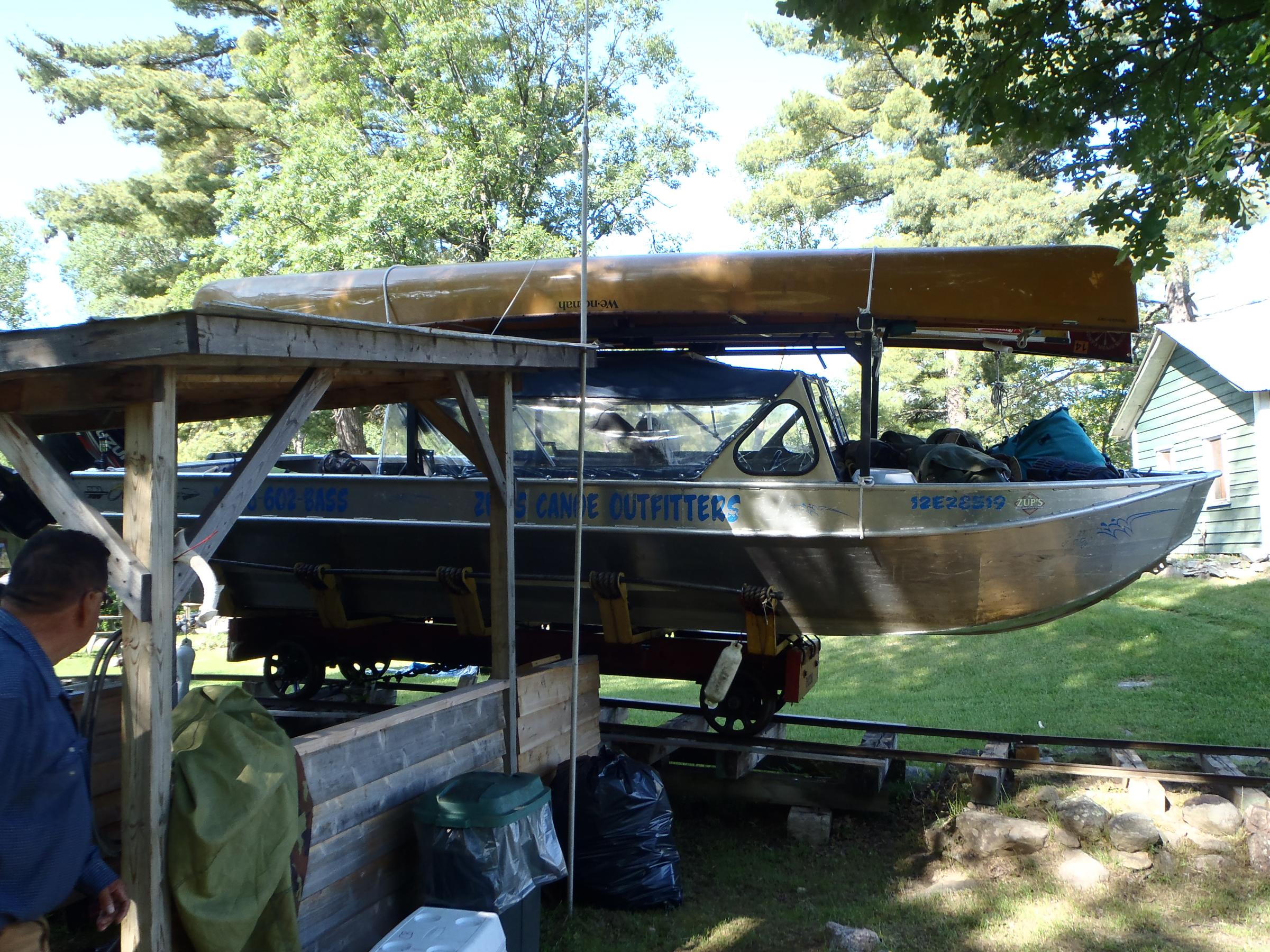 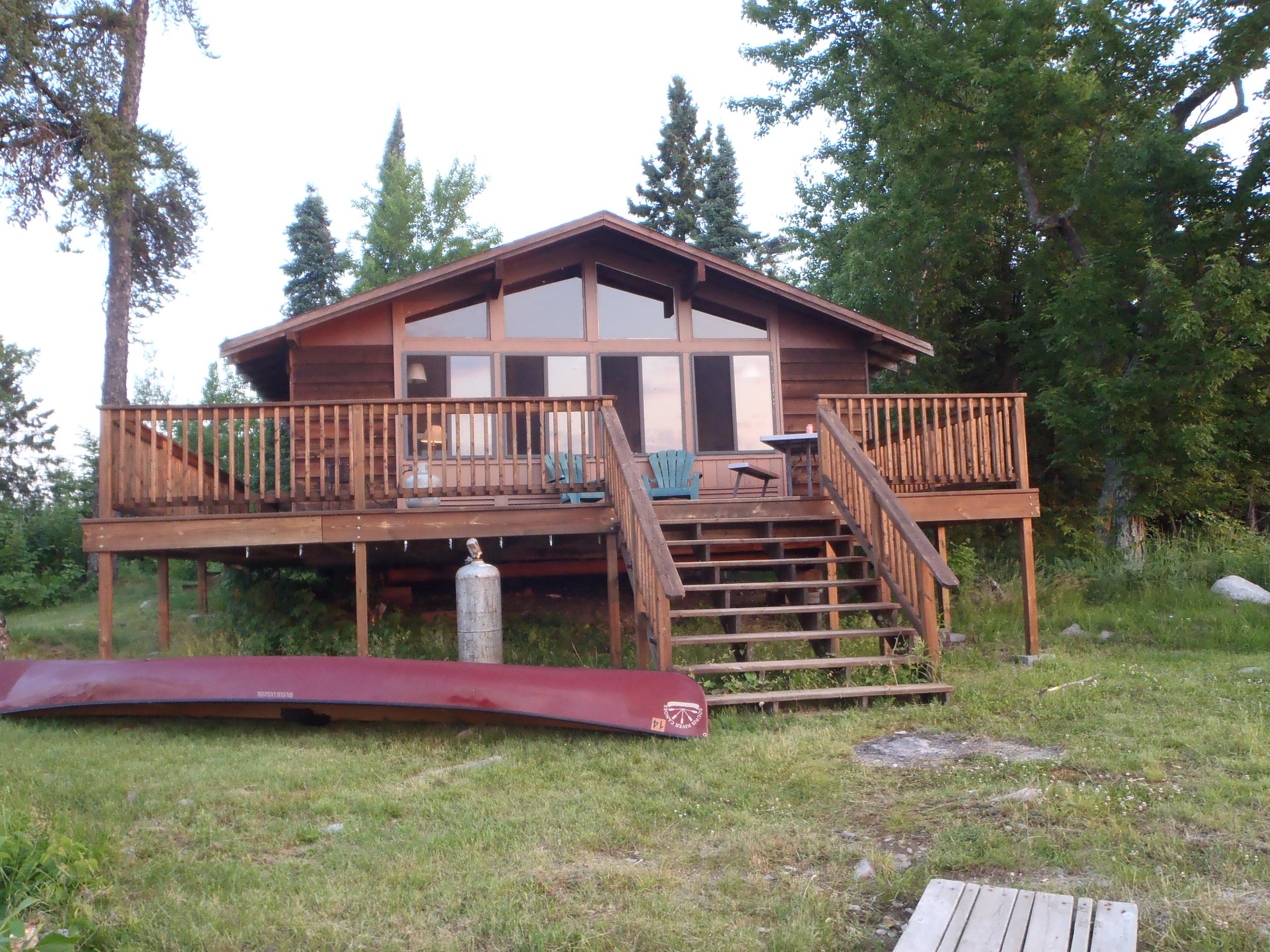 Our cabin on Lac La Croix 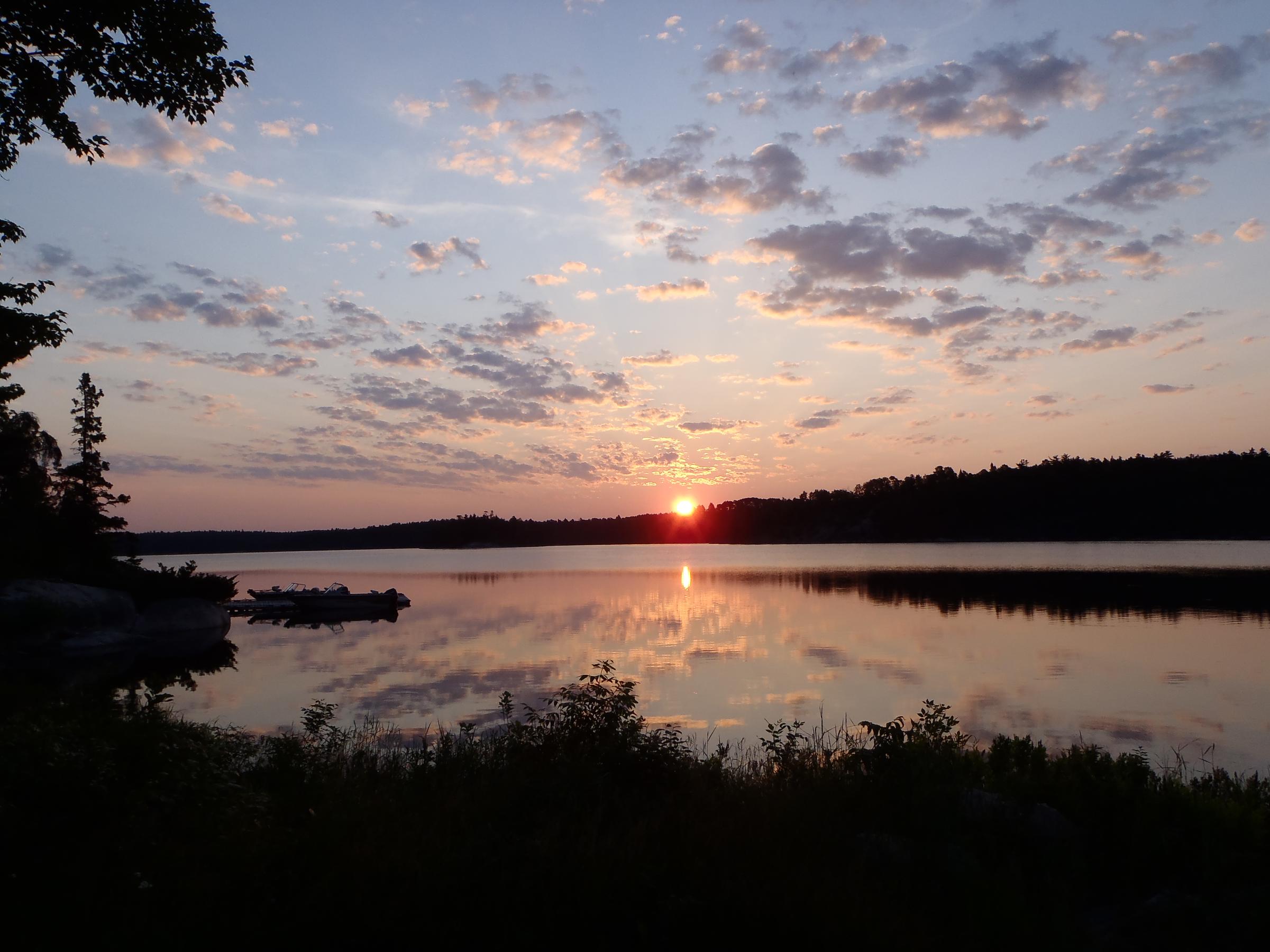