Trip Type: Paddling Canoe
Entry Date: 07/29/2014
Entry Point: Fall Lake (EP 24)
Exit Point: Mudro Lake (EP 23)
Number of Days: 5
Group Size: 2
Trip Introduction:
This was both our first time in the Boundary Waters and our first canoe trip outside of paddling around the lagoon near home for practice. We saw Upper and Lower Basswood and Wheelbarrow falls, the Horse River, Horse and Fourtown Lakes. We had an amazing campsite just below the falls on nights 2 and 3. We caught a few fish, saw lots of Eagles and beavers, learned a lot about canoe trips, fell in love with the tranquility and vowed to return soon.
Discuss Trip: View Discussion Thread (12 messages)
Day 1 of 5
Tuesday, July 29, 2014

This was our first time in the BWCA and the excitement was simply overflowing for both of us to get under way. We had arrived at our outfitter the day prior and went over our equipment and spent the night in the bunkhouse.

We woke at 6am and got our selves ready. Had a quick breakfast at 7 that the outfitter provided and we were in the truck by 7:40 headed for Fall Lake. We pulled up right at 8:00 and there was a towboat waiting for us with our canoe already loaded up top and two men waiting to help us load our gear. This was our first view of the Boundary Waters and it took a minute to sink in that we were actually there! It was mostly sunny, 75 F and a little windy. Seemed like the perfect day.

We boarded our tow boat and made our way towards the northern most part of the motor zone to be dropped off. The tow would take us through Fall and Newton Lakes and into Basswood Lake. The entire boat ride there, which was about a hour and twenty minutes total with portages, we never saw another person. I was not at all prepared to portage a motor boat. The thought hadn't occurred to me until I was jumping out and helping to lift it to get the portage wheels underneath and then sprinting with the boat uphill over rocky terrain against the wind... It was probably because of the adrenaline and excitement that I was able to help out as much as I did. I'm not as young as I once was. After 2 portages with the boat we were dropped off near campsite 1558 which was not occupied. By now it was about 9:00am, our towboat driver left and we were a pretty good way into the Boundary Waters. We spent about an hour just getting ourselves prepared and oriented. Loaded the canoe and started to paddle for Basswood Falls. The paddle to the first portage took some time. We were taking our time just looking everywhere and taking in the beauty. It didn't take me too long to adjust to the speed of our travel versus the map. I began to easily identify land points and islands which made me feel much more comfortable navigating this vast area. At one point, about and hour after we paddled away from our drop point, we were paddling past a point that had a campsite and an older gentleman sitting by himself at camp. We wave to him. About 5 seconds later he yells to us: "You're holding the paddle the wrong way" At first I laughed like he was joking, but then I realized we were using bent shaft paddles (never had before) and so we both flipped out paddles around and what do you know! Paddling suddenly seemed easier! About 5 more seconds and he yells; "THATS how they are SUPPOSED to work!" Pride only mildly bruised. Fortunately he said something to us or we probably would have paddled the whole trip with the paddles backwards. I'm sure he was thinking..."NOOBS"

We probably got to the first portage around 12:30. This was the portage around Upper Basswood Falls. The one that's 340r and would soon try to break our will. This portage was pretty busy. There were a couple of larger groups coming and going and I was a little surprised to see so many people, but I knew this was a popular area, so I just got on the trail as soon as it was clear. We tried to single portage, but it was too much for us. We had to stop several times along the way. Near the half way point along this monster portage a thunderstorm swept over us rather quickly. We dropped the canoe and both packs and grabbed our rain gear. I had frogg toggs for us both and they came in handy! They kept us dry throughout the storm which only lasted a short while. We opted to leave the canoe around the half way point of the portage and return for it because it was slowing us even more to go 150 feet and rest. There was enough of a clearing to do that and that worked for us. What a way to start our trip. We were both exhausted and wet. But somehow those things didn't dampen our spirits. We knew where we were headed and enthusiastically got back in to paddle.

There were some very mild looking rapids after that portage. We saw a group of 2 canoes go through but opted to safely portage around them even though we were tired. There really isn't a portage marked on the map at this spot. I imagine the water level was higher and that made it look more intimidating.

As we continued up Basswood River, we were about to portage around a set of rapids and we noticed the campsite near the portage was empty. I told my partner that it would probably be a good idea to stop for the day, as we were tired and still needed to set up camp. She reluctantly agreed, but was happy later that we made the decision.

We unloaded and looked around. This was site 1542 I believe. It was really private because it was on a narrow part of the river giving it some cozy feeling and the end of the river in both directions were obscured by peninsulas jetting out. Also the gentle sound of rapids played in the background. It was a nice little site. The camp furniture was sparse, but we made the best of it. Best part was we didn't see another person or canoe for the rest of the day. It was like our own private paradise for a while.

As I was telling my partner I was glad we had stopped because sites up ahead closer to the falls might be full, Mother Nature churned up a cold wind and we saw flashes of lightning up North. We immediately went into "get the tent ready" mode and our pace and heart rates quickened as the storm grew more imminent with each minute. We scrambled to get it set up in the wind before the rain got to us. The tent pad was quite a ways back from the water, so it took some time to move stuff back there. We managed to get our packs under tarp and the rest of our stuff in the tent about 2 seconds before the downpour came. I am not even exaggerating. I zipped the tent door closed and we waited the storm out which lasted about 30 minutes. It cleared, briefly, and I went out to check the site when another hard downpour rolled in. Back to the tent for another round. After it cleared we had a peaceful evening. We were able to get a fire started and make dinner. After we ate I fished a few casts off shore and caught a little Northern, about 18" on a Jig and Leech near a downed tree limb. I thought it was a Bass when I hooked it. This was the only fish I wasn't able to get a photo of. It was also my only fish that night. I was too tired to do any more fishing.

Tired but inspired, we went to bed for the night so we could get an early start the next day. 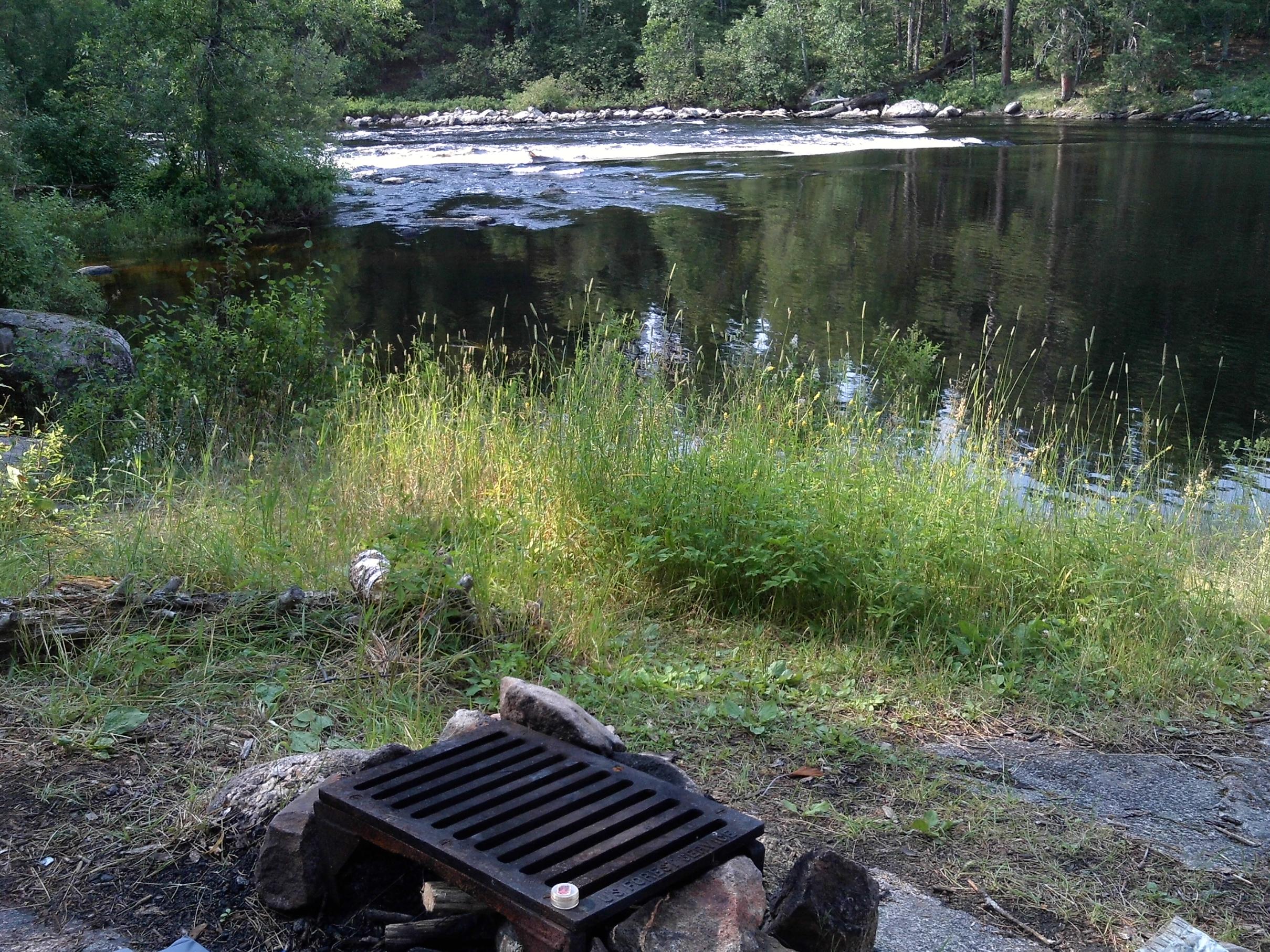 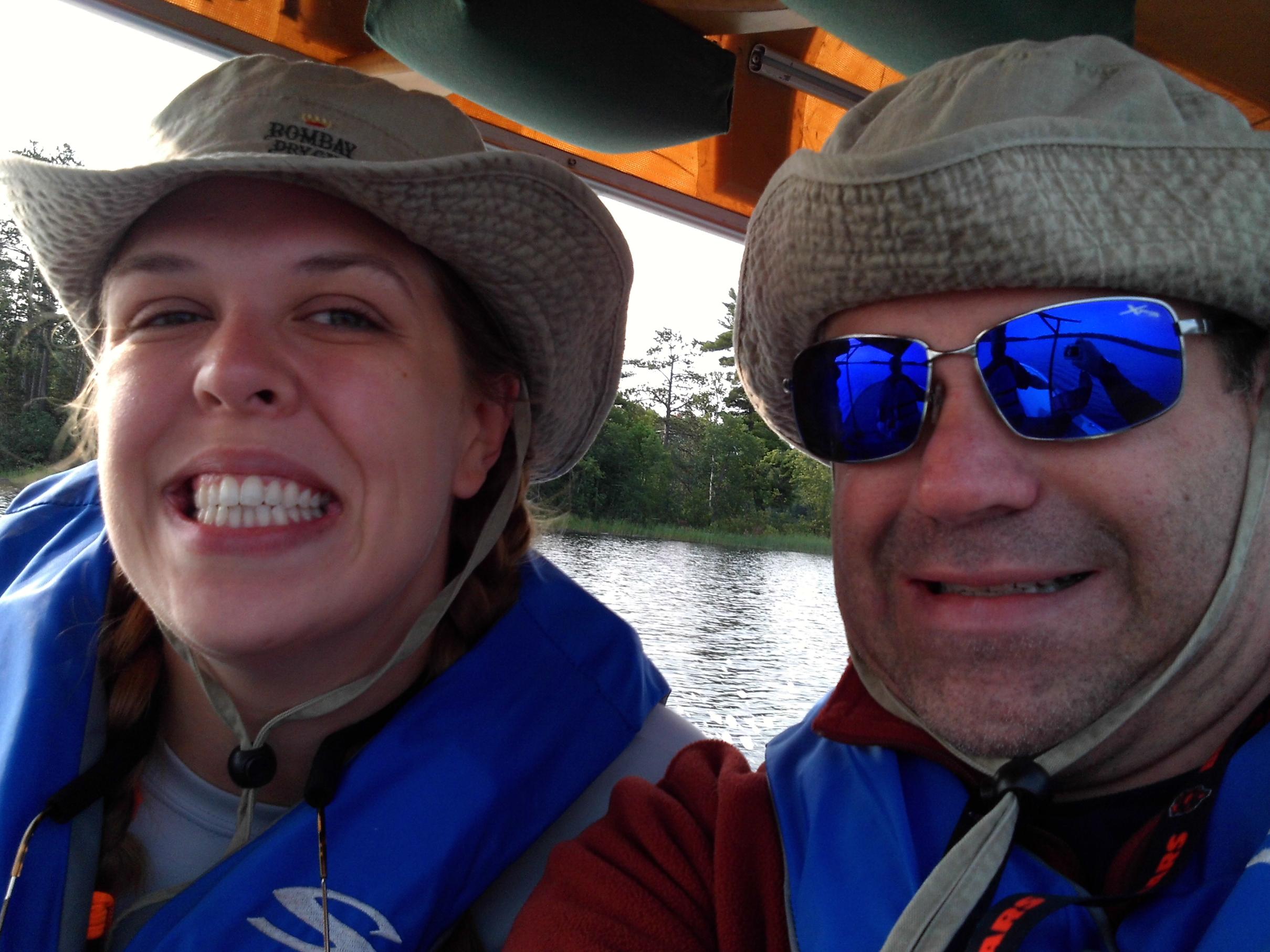 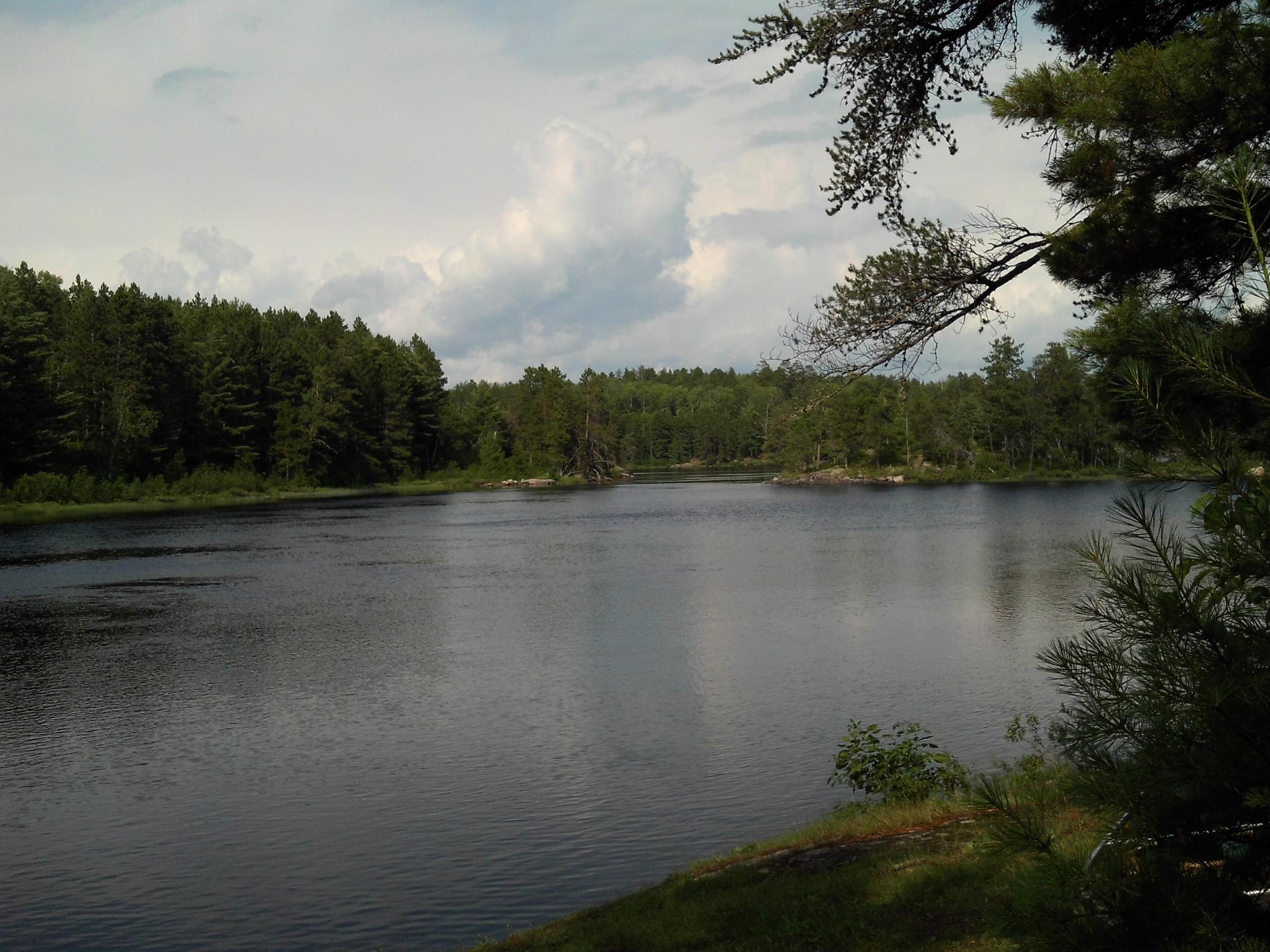