We were on the water by 9:30 this morning. We had a headwind today, but it was light enough that Morgan did fine. Her arms were tired, but she never complained...just dug in and sang to herself. 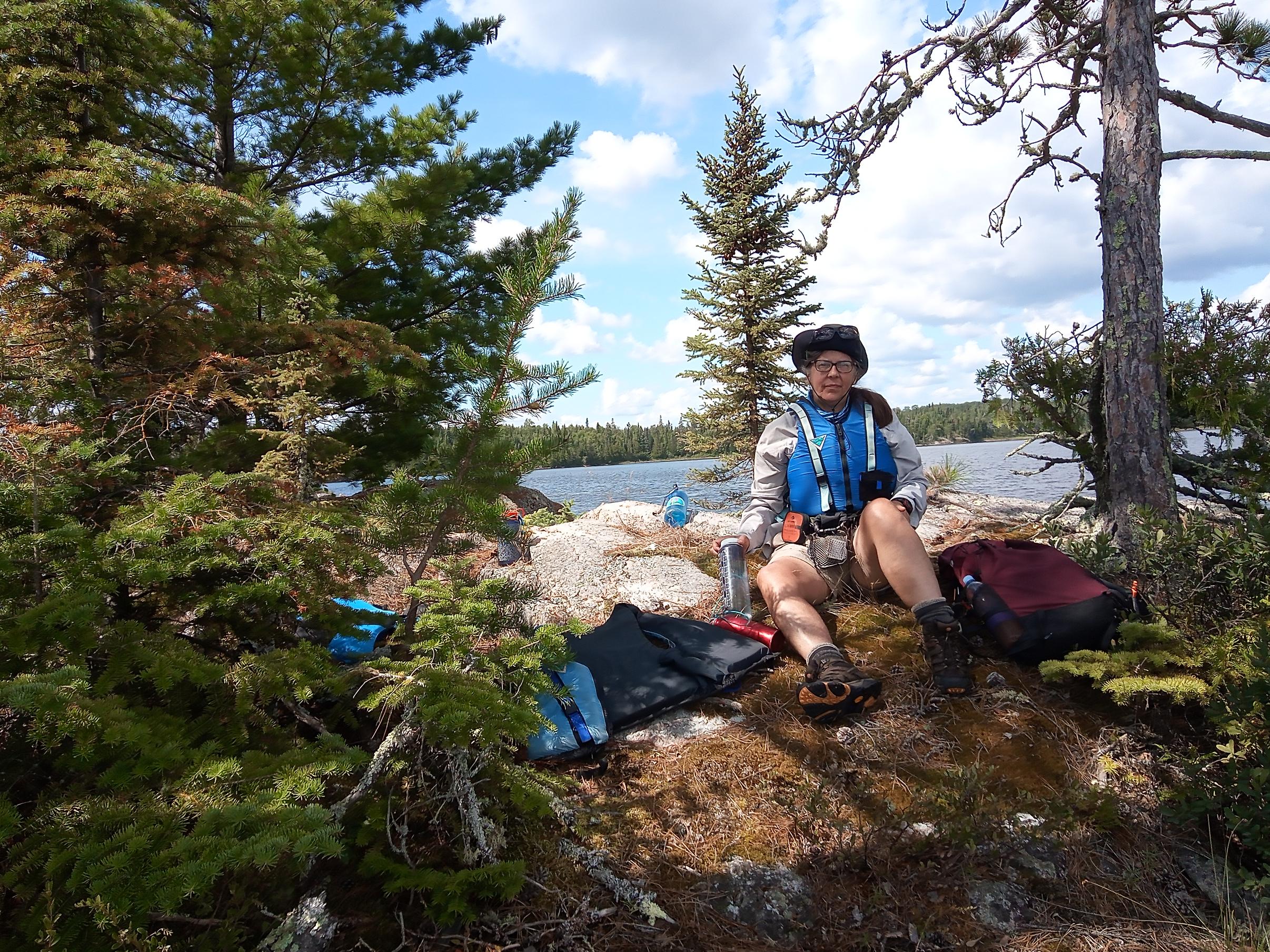 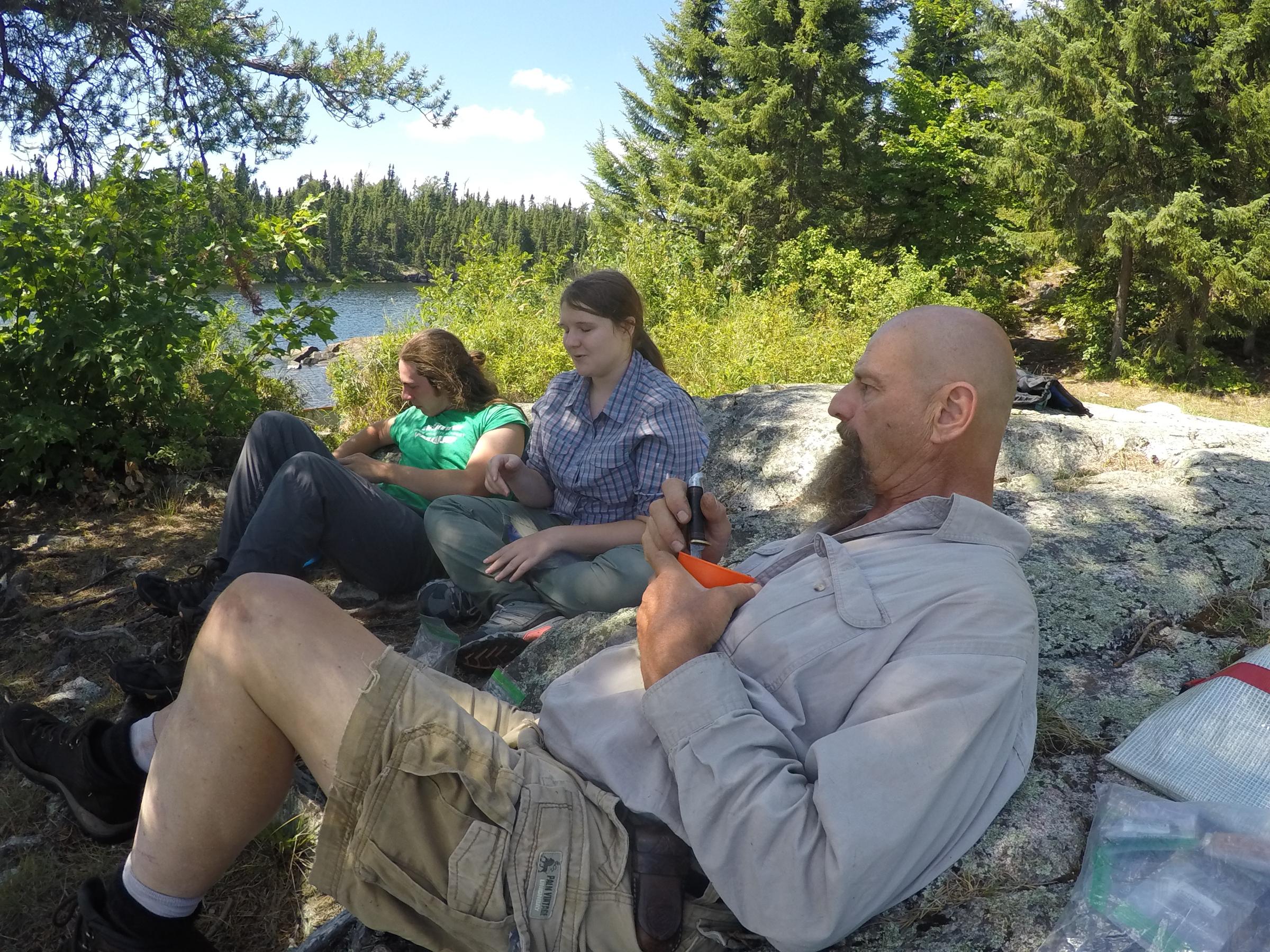 Lots of islands to navigate through, but Stew, Joey, and I all had maps so it went smoothly. We stopped on a teeny island in Red Rock Bay to eat a small lunch. But then tons of canoes started coming. One large group looked inexperienced and like they might be a little lost. We didn't want to get stuck behind them on the portage to Red Rock Lake, so once we were on the water, we worked to pass them. Stew and I reached the portage first and decided to get our gear across right away. There was a single canoe at the other end just starting to load. We walked around them into the water, and loaded our canoe. Then I went back to help Morgan and Joey. I carried the Old Town Tripper, while Joey and Morgan each took a pack. We had them loaded quickly and we launched without ever seeing someone from the group we passed. Glad we got ahead of them. They didn't come out of that bay for another 45 minutes. 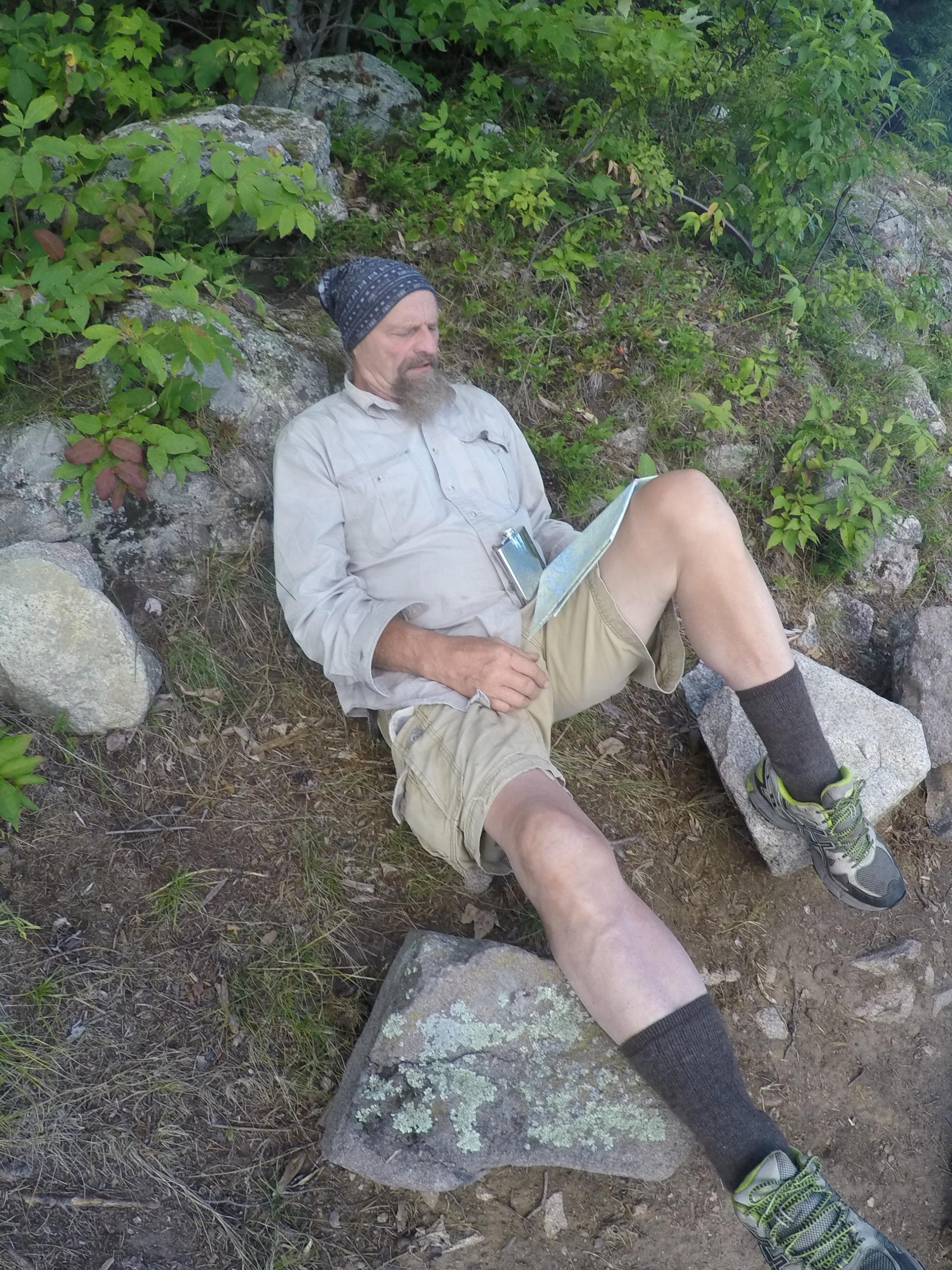 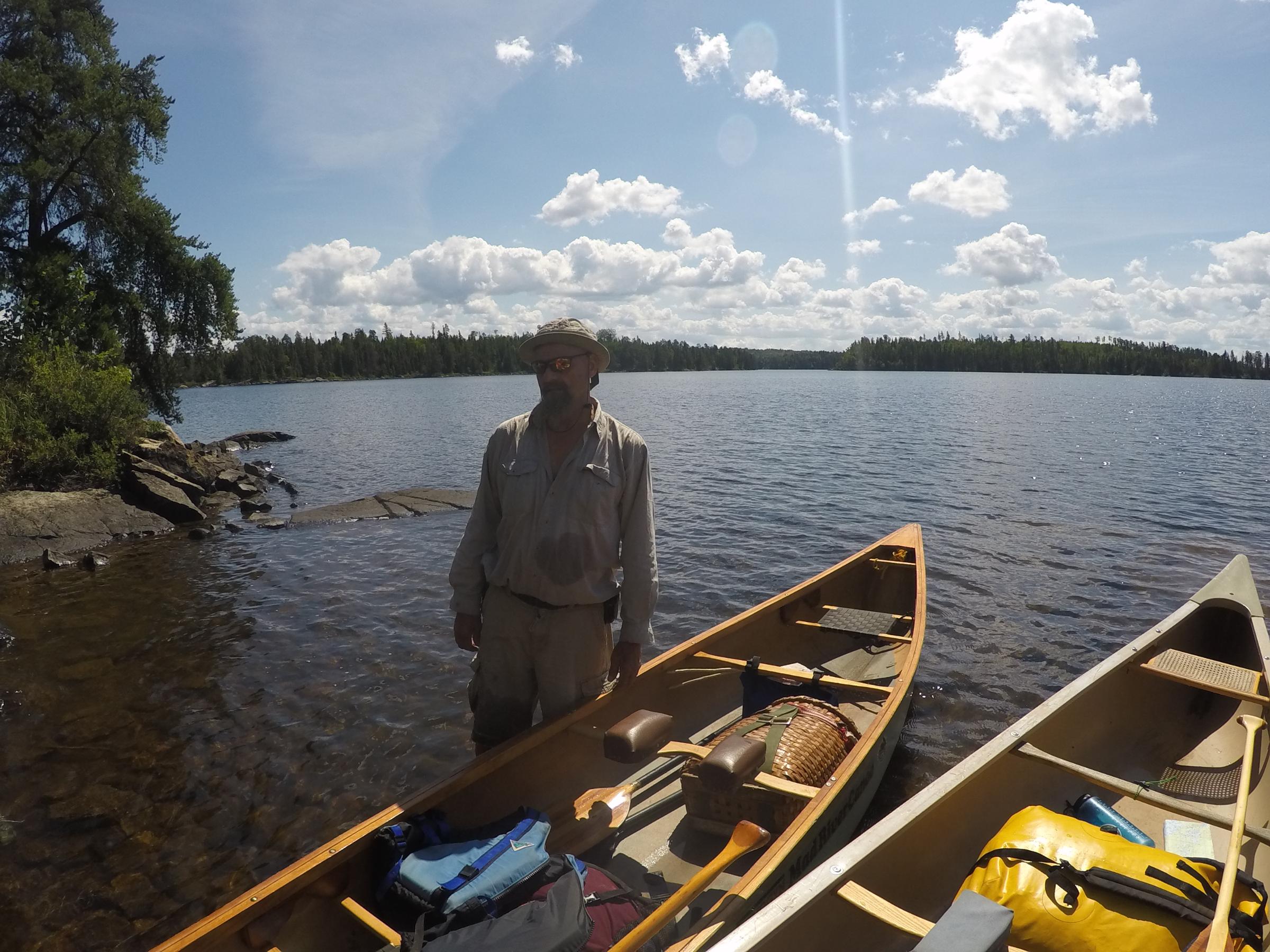 The single canoe that loaded just ahead of us was looking for a campsite. We didn't want to be pushy, so we slowed to stay behind them until they started stopping frequently to figure out where they were and then paddled past the first campsite. So we hurried over and claimed it, campsite #408. This site has a great combo of shallow swimming (both Morgan and Joey hate swimming in deep, dark water) and reasonably deep water for me and Stew. Lots of frogs hanging out on shore unconcerned with our movements. There was one nice level and shady tent pad for the 4P tent and a nice shady hammock spot for Stew. 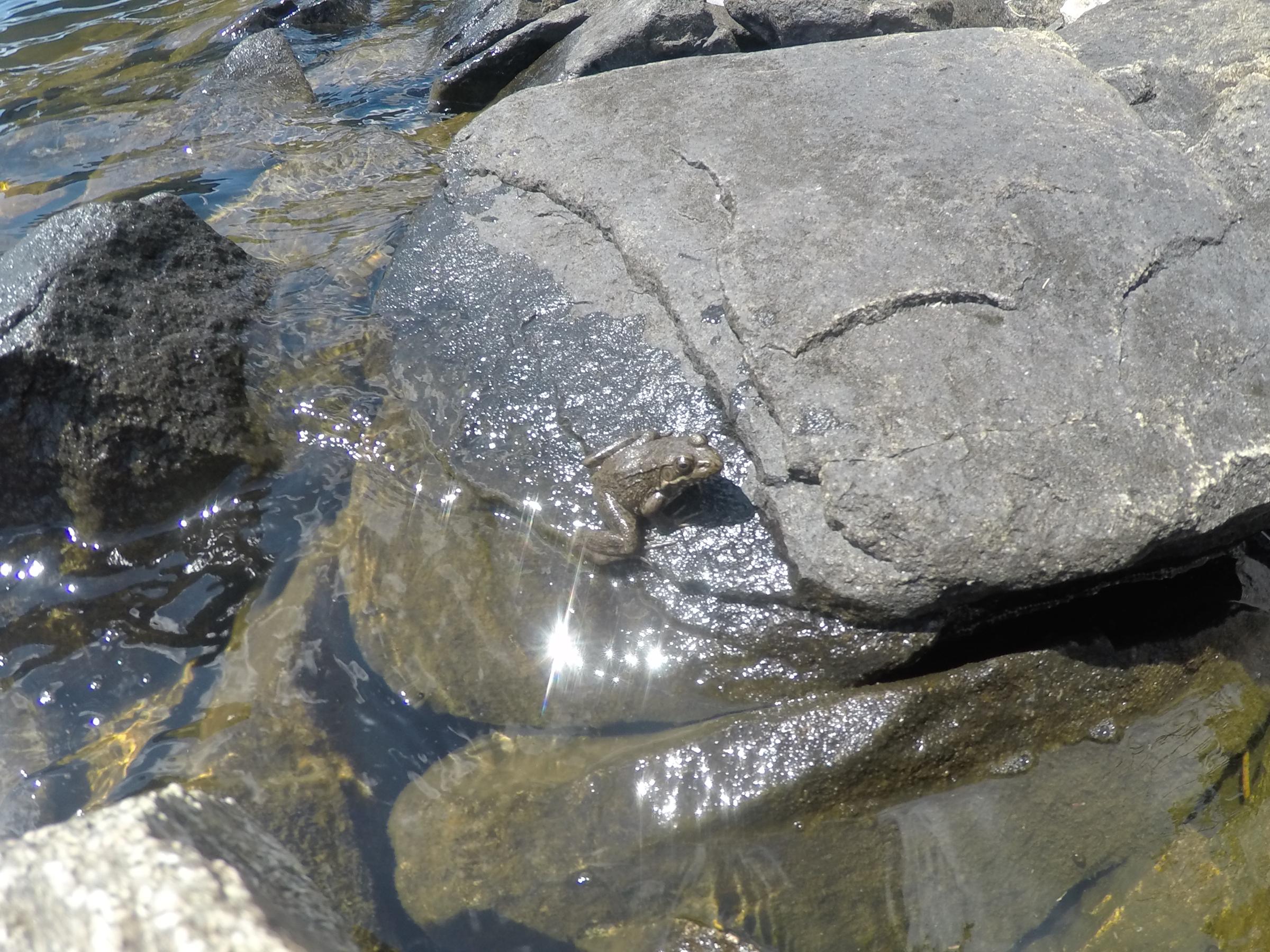 Stew and I spent some time paddling around exploring one of the bays while he did a little fishing. A few nibbles, but no catches. 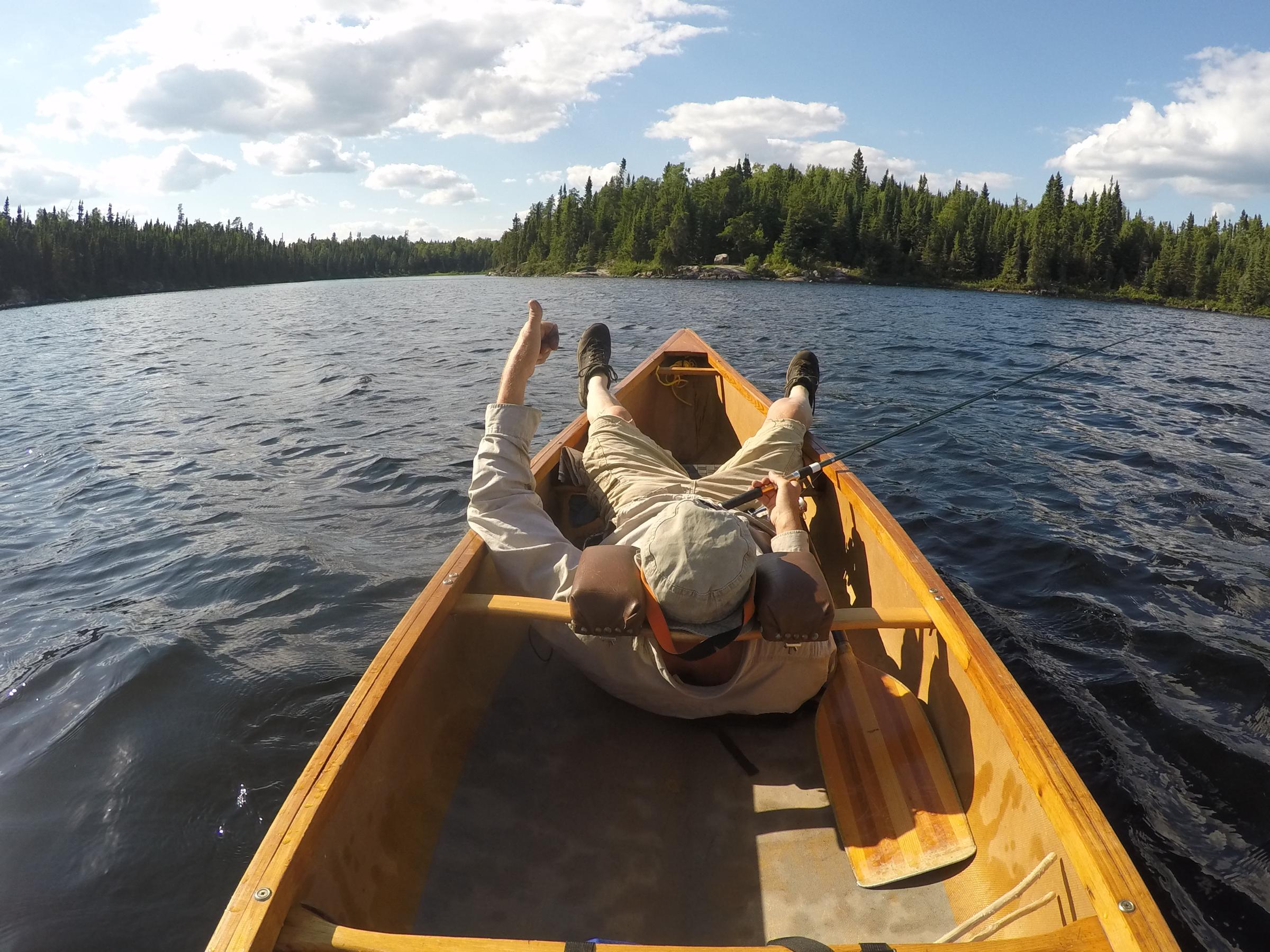 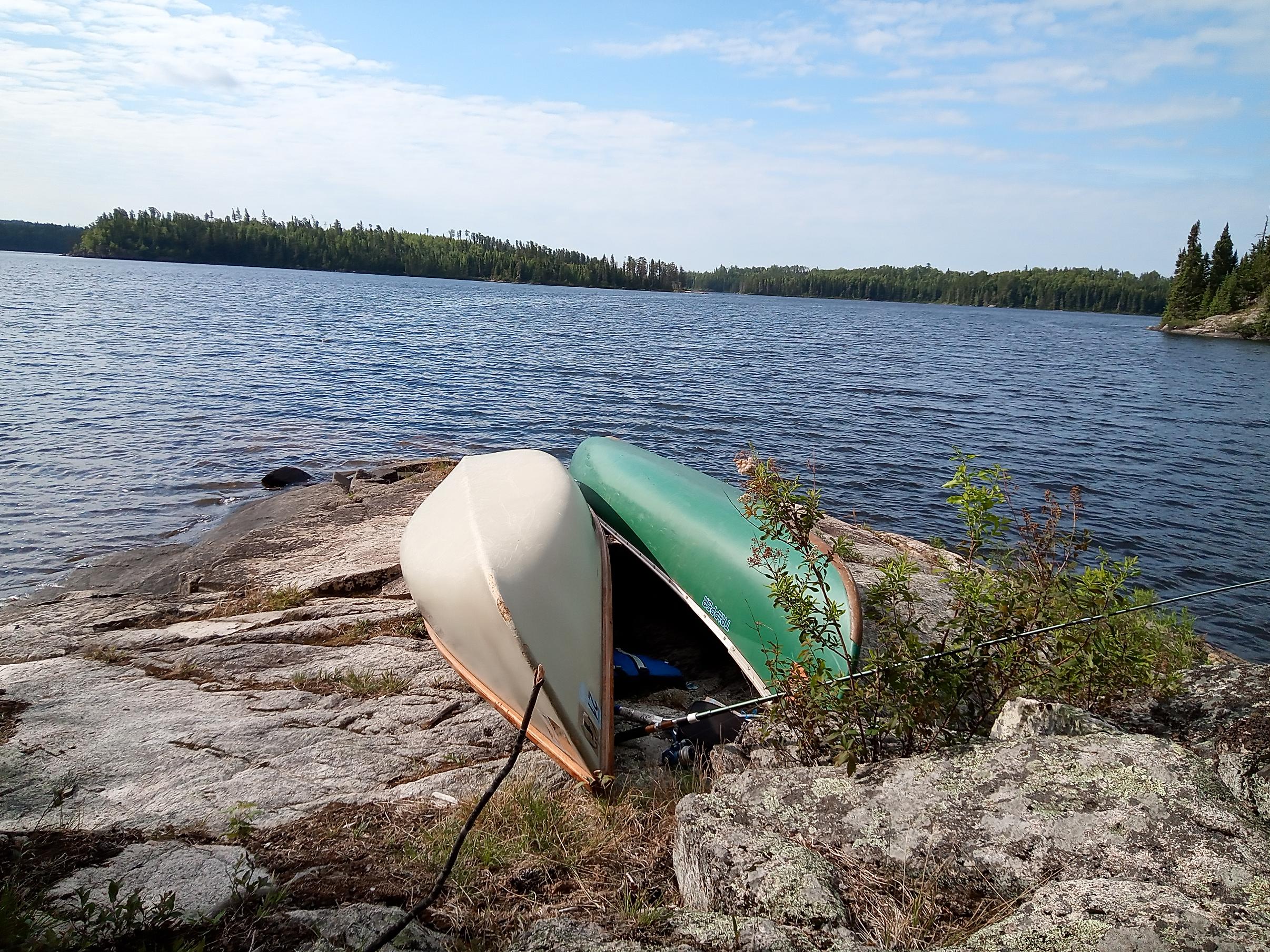 Morgan is the queen of finding lost/abandoned fishing lures on both land and in the water! In just these 2 days, she has already found 5 of them! She earned her wilderness nickname, Eagle Eye. She also has such a great attitude and is a pleasure to have along. 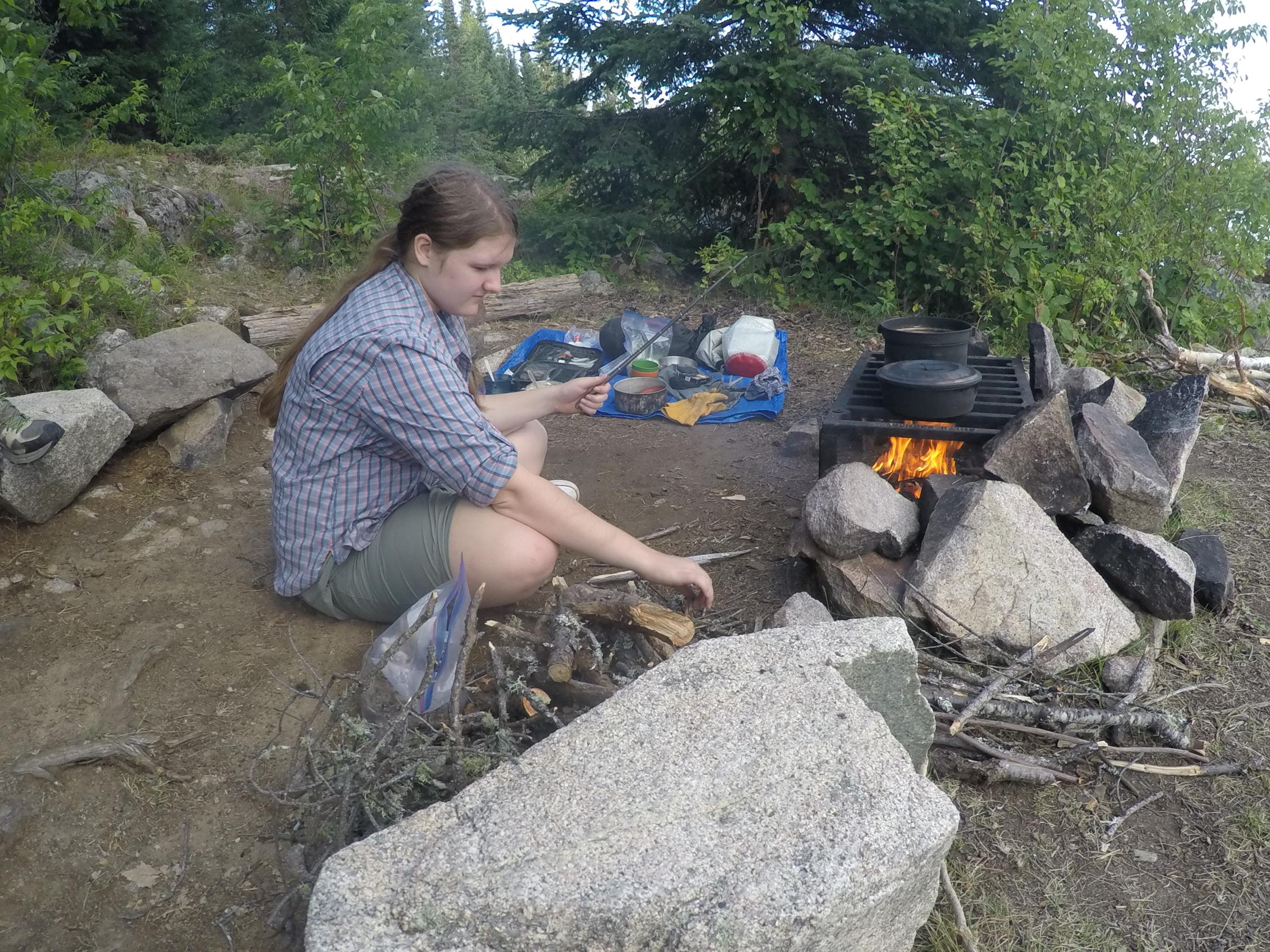 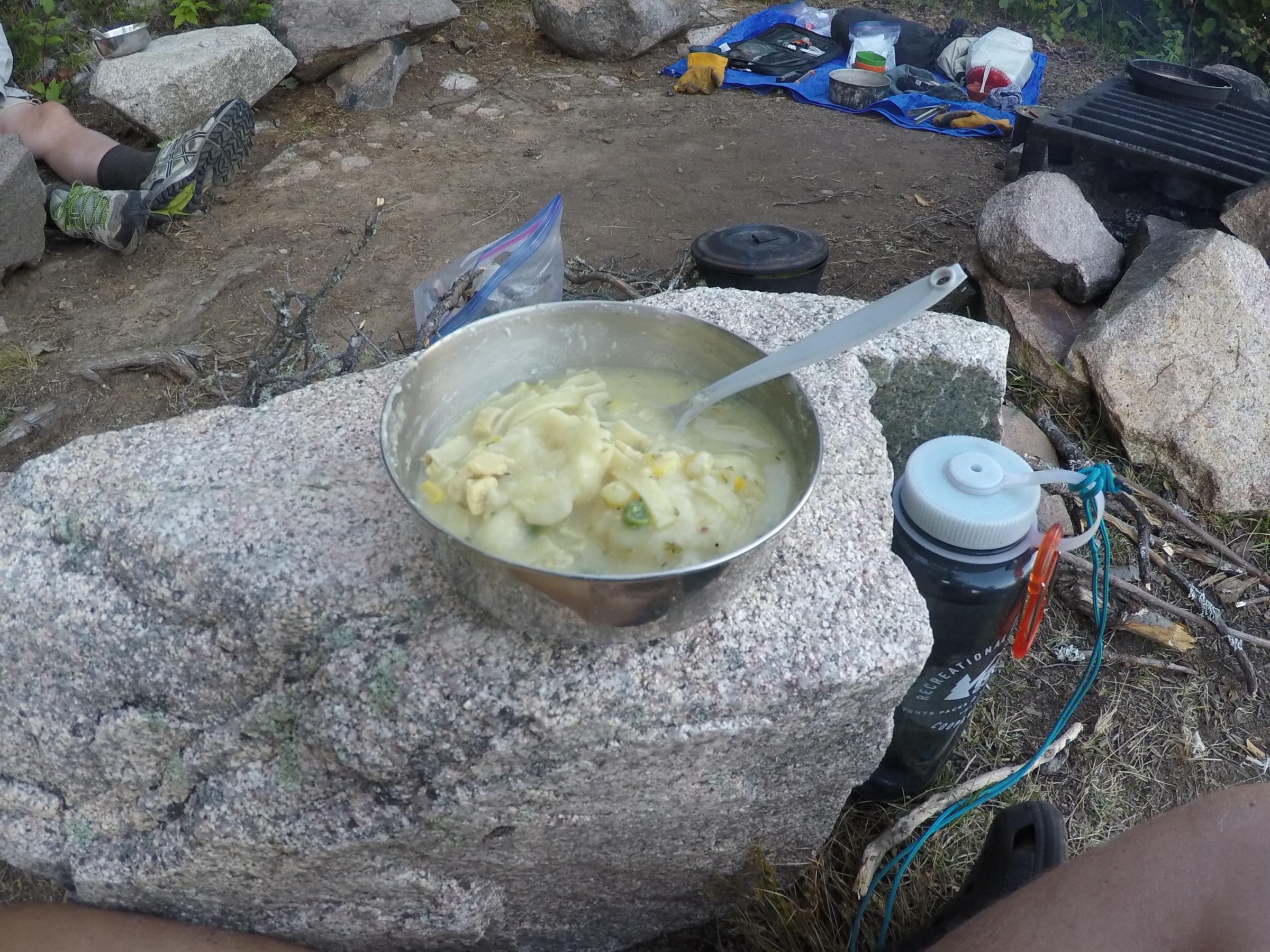 After a dinner of chicken noodle soup with dumplings plus cupcakes for dessert, we went exploring. There is a beautiful overlook off to the left of the path to the latrine. We all sat up there watching the sunset. Joey and Morgan stayed up watching the stars. They watched a beaver swimming by in the moonlight and heard wolves howling. I heard the beaver slap its tail, but was sound asleep by the time the wolves were howling. 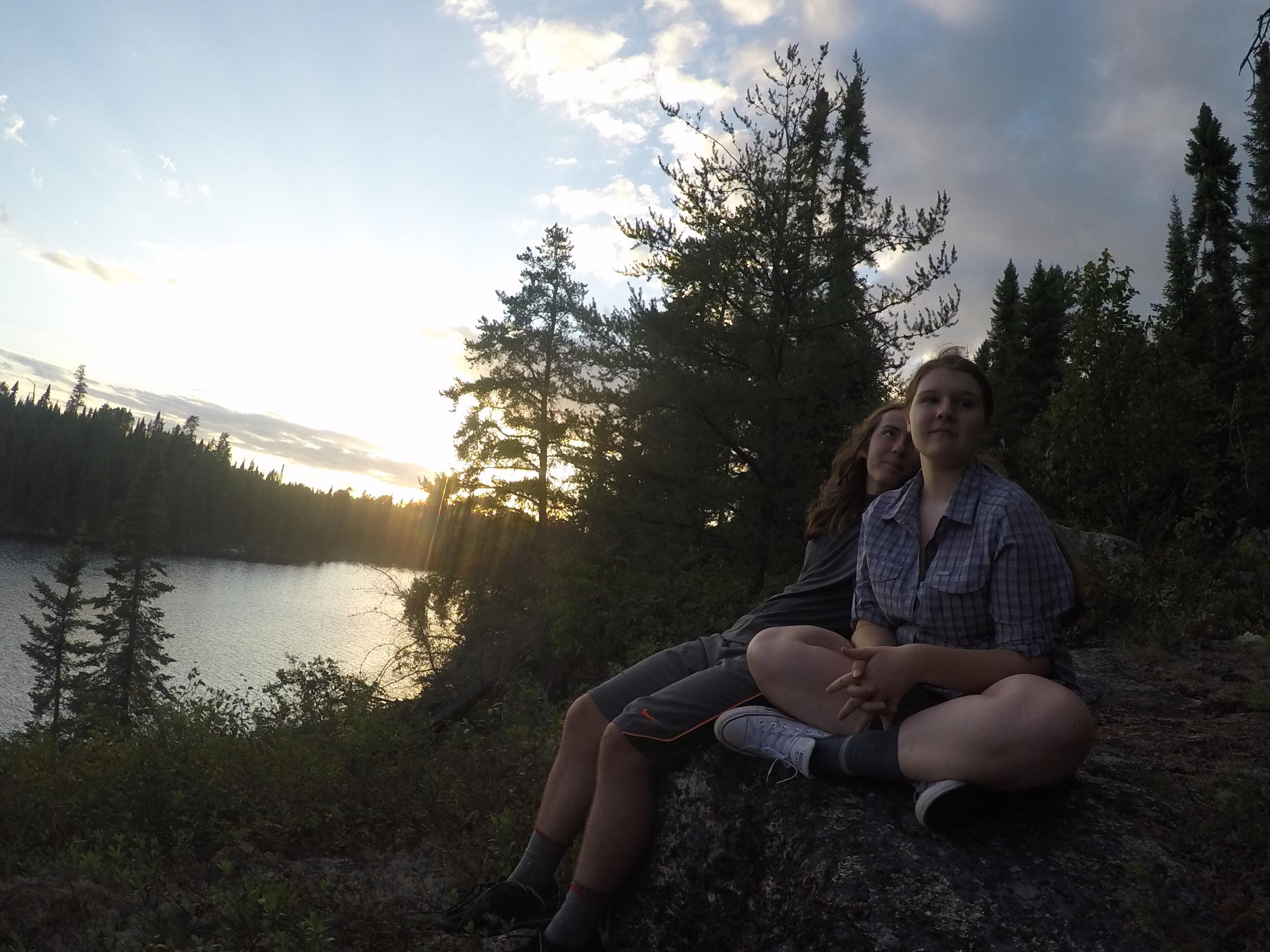 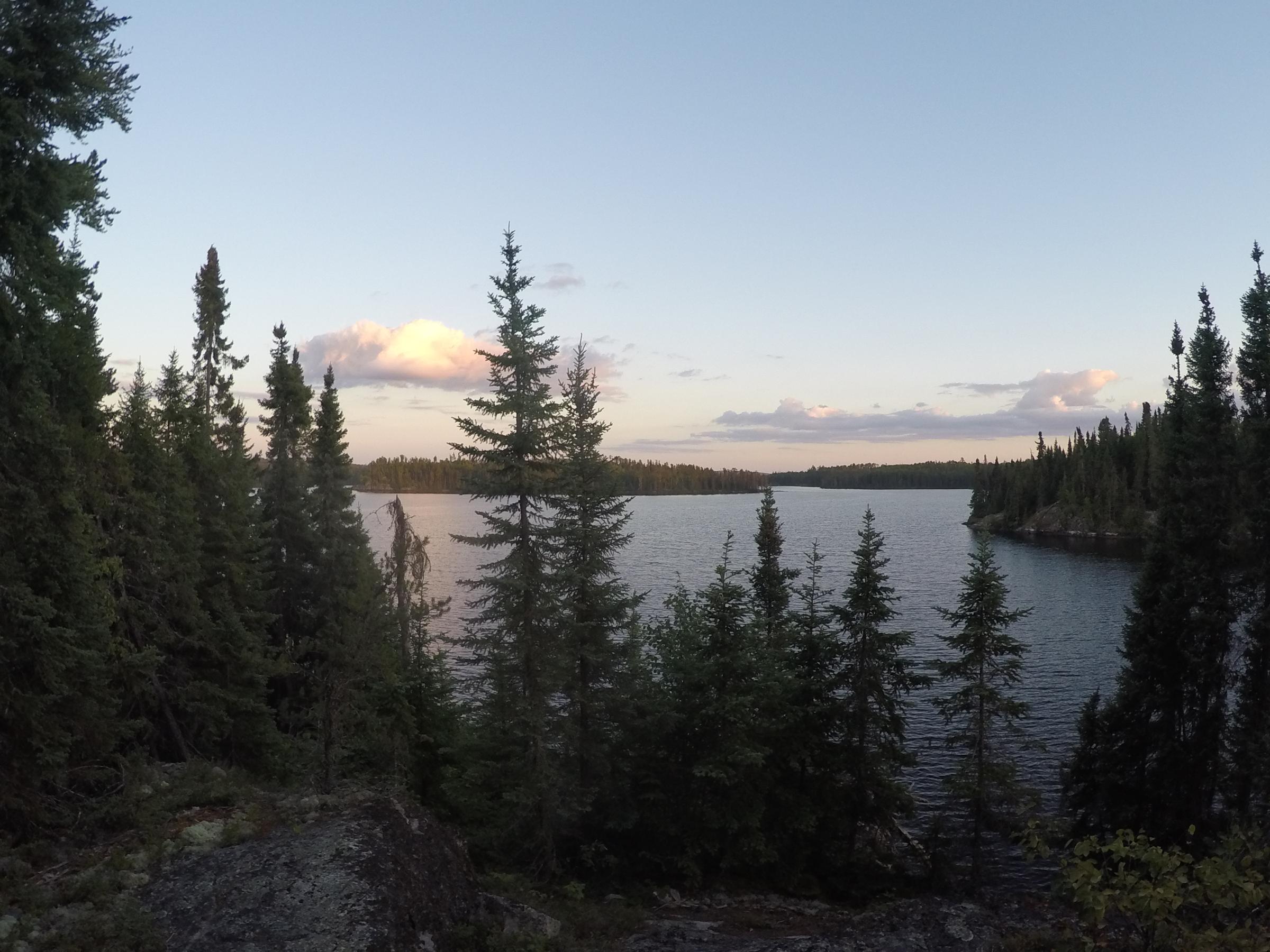 Quote of the day: "Spiders at the biff... a feature, not a bug. Biffy spiders don't eat your butt, but they do eat the things that eat your butt." 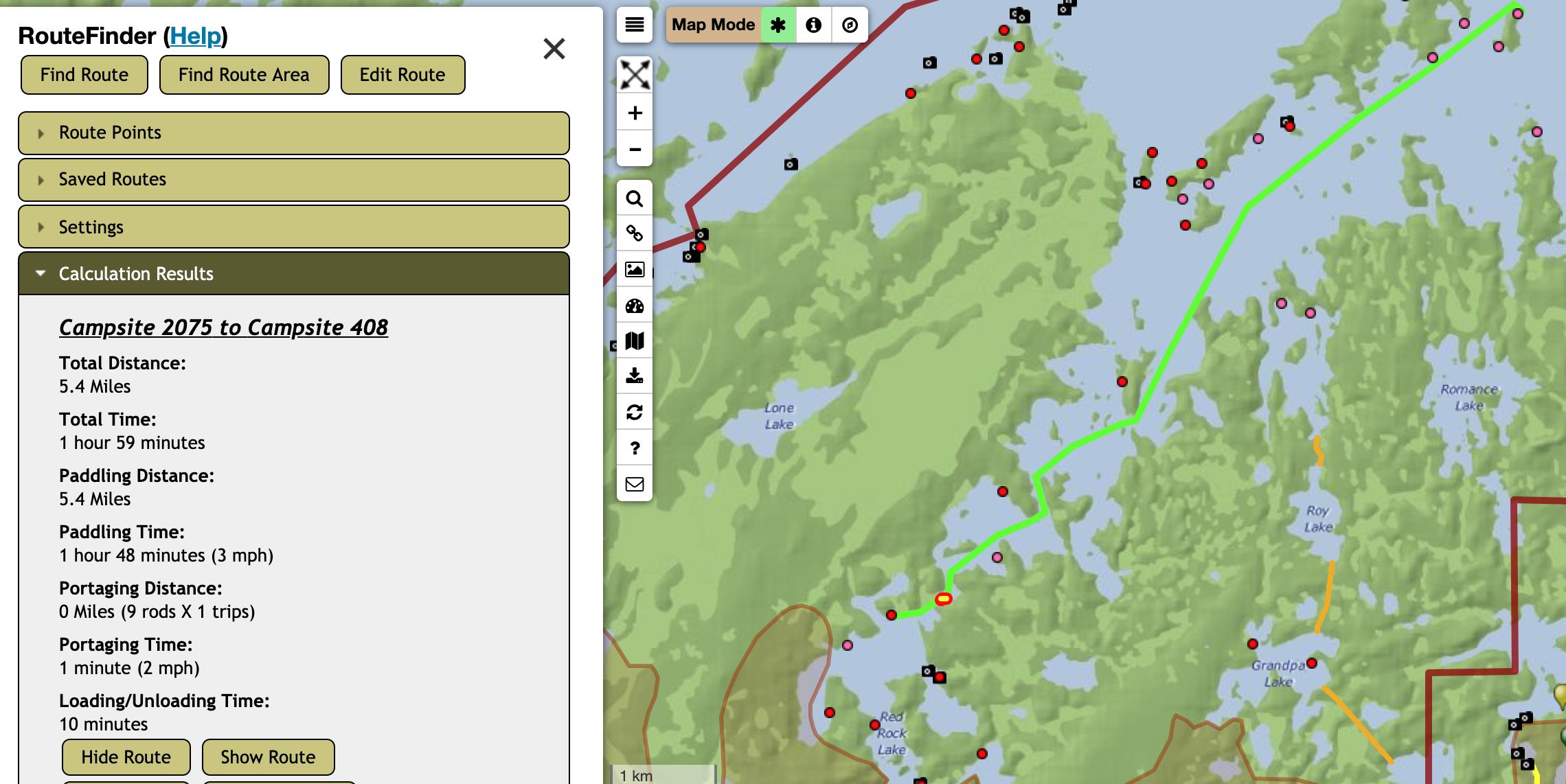