Trip Type: Paddling Canoe
Entry Date: 05/27/2022
Entry & Exit Point: Quetico
Number of Days: 6
Group Size: 2
Trip Introduction:
With the flooding occurring on the border this spring, I had more apprehension about this trip than any I'd taken in my 25 years of paddling trips. I'd been reading the reports of paddlers rescuing themselves or being rescued after capsizing in fast water. I'd also been reading about flooded portages that were nearly impossible to find or traverse. With cold water temperatures and high, fast-moving water, I took a couple precautions. I packed a rescue blanket and storm matches in my PFD. I also borrowed a Garmin InReach Mini from a friend and activated my own account for it. The week before our trip, I got a call from Quetico HQ. They said the Beaverhouse ranger station had been damaged by the high water and wouldn't be open when our trip started. They offered the very pragmatic option of remote registration instead of requiring us to drive into Atikokan to pick up our permit. As long as I didn't call to cancel our trip, they would register me in their system the morning of our entry. The day before our entry, I called the Quetico staff to check on park conditions. They said the Beaverhouse portage from the parking lot to the lake was dryish so there was no need to float part of it as had been the case a few days ago. Portage crews hadn't returned from their first trips into the park so the ranger didn’t have anything else useful to offer.
Discuss Trip: View Discussion Thread (6 messages)
Day 1 of 6
Friday, May 27, 2022

Yesterday, I left my house in the Twin Cities at 12:30pm, heading for Walter's house near Cook, MN, with a detour through Ely. I got to Piragis about 5:00 and bought a reusable pack liner and a disposable one just in case the reusable doesn’t work out. I had Cannelloni at Sir G’s for dinner. High gas prices were another theme in 2022: $4.29 per gallon in Cook.

We left Walter's house near Cook at 5:25am. We returned ten minutes later because I'd forgotten the cold food in the fridge - nice start.

We were on the water at Beaverhouse a little before 10:00, trolling our pink ladies enroute to the Quetico Lake portage. We saw many lake trout in the shallows before the portage. Very, very cool.

With the high water in Beaverhouse, we were able to paddle all the way to the portage, staying to the right, out of the fast water. As we approached the portage, I mentioned to Walter to be careful with his rod tip which was leaning out the front of the canoe. He acknowledged me, but didn't move his rod. Sure enough, he broke his brand new rod pulling into the first portage. He hadn't brought a spare, but I had.

Between the broken rod and my losing a leader and one of my favorite lures we really "jicky jacked" the first portage. I don't think I've ever done such an uncoordinated portage.

After the portage, we started fishing the pink ladies in the narrows entering Quetico because of all the Trout we'd seen in the shallows on the other side of the portage. Of course, we snagged a few times. After one snag, my pink lady didn’t set so I gave it some slack. When I ripped up to set it, the knot tied to the pink lady failed and all was lost. Now I was down a pink lady, the great white spoon, the gold cyclops, and a leader - all before catching a fish.

We caught the first lake trout, which became dinner, in 100’ south of Eden Island. All the way across the lake, the trout were suspended at 11’-13’. We hooked many more fish in the narrows southeast of Eden Island. We got most up to the boat, but only three in the boat - barbless hooks and Walter was fishing with a single hook instead of a treble. 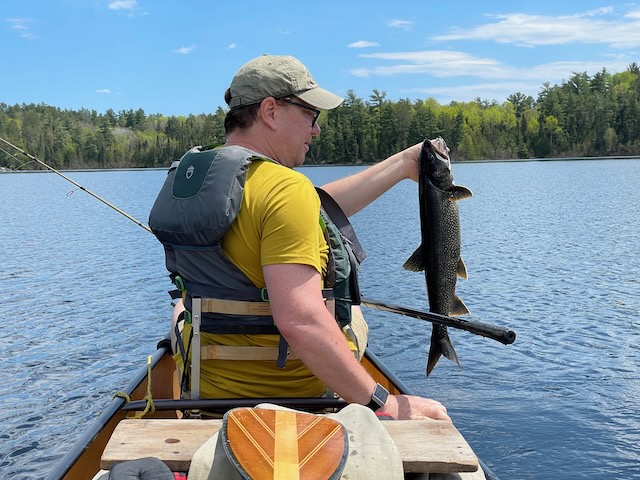 (Day 1 Dinner)
We pulled up for a lunch of PB&J on pita and a stretch. Afterward, we caught more fish, but decided it was slowing us down too much so we stopped fishing and started paddling in earnest. This was about 3:00. We decided we would make a destination decision no later than 6:00. We pulled up for a stretch about 4:30 and decided that we could make Jean.

FYI, the portage from Quetico to Conk is marked on the wrong side of the falls on both the Fisher and McKenzie maps.

Dead tired (we didn't take in enough calories today), we were thrilled to see our desired 5-star camp in the narrows of Jean available. We baked the lake trout in foil and cooked pasta for dinner at 9:30 before bed at 10:30 - way too late for us now that we're in our 50s. 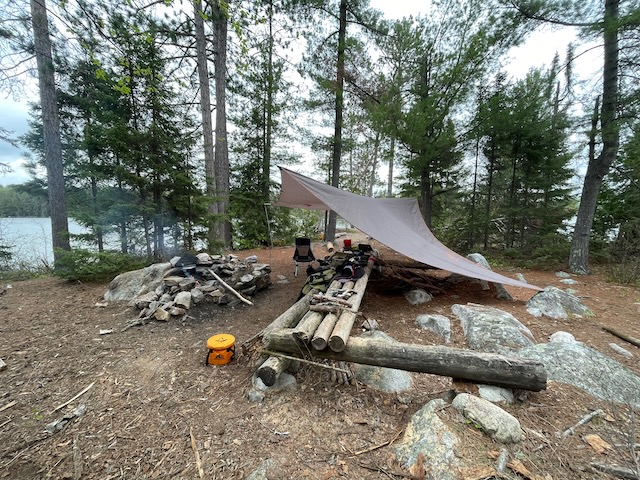