Hiking across the border
by MN_Lindsey

Trip Type: Hiking
Entry Date: 10/10/2022
Entry & Exit Point: Other
Number of Days: 6
Group Size: 2
Trip Introduction:
BRT Recap: Day 0 After finishing the entire Superior Hiking Trail, and years of talking about it, my hiking best friend and I finally decided to tackle the Border Route Trail! Bre showed up to my house around 9:30 a.m. on Sunday 10/9 to head up to Grand Marais to meet Carl from Rockwood. He was going to follow us up to the Eastern Terminus where I would leave my car, and then bring us back to Rockwood for the night. We had a lovely lunch in Grand Marais of stuff we packed at home and ate overlooking the waves of Lake Superior near Worlds Best Donuts. After some walking about, we met Carl at IGA Gene’s. We followed him up to Otter Lake Road to drop off my car, and he brought us via the backroads to Rockwood Lodge. He pointed out the prestigious, invite only Greenwood Lodge, and showed us some other cool hidden gems in the backroads to Gunflint Trail. The bunkhouse was AMAZING, with a private bathroom and comfy mats. He had the heat on for us, and included also was a folding table and chairs so we could eat our dinners, for me, Subway! We really lucked out because this was the last day/night that Rockwood was open for the season.
Discuss Trip: View Discussion Thread (11 messages)
Day 1 of 6
Monday, October 10, 2022

Carl & Mike (the owners of Rockwood) had coffee on for us in the morning, and helped us check the weather one last time before Carl drove us to our destination.

On the way he took us into Tuscarora Outfitter’s property to take a look of their property as I’ve followed these outfitters on Instagram and Facebook for several years, and always admire what Andy & Ada are up to. All was quiet, and soon we left there for the Western Terminus…

Carl soon dropped us off, snapped a photo of us (telling us with a bit of dark humor, “This is the photo they can use in the newspaper for missing hikers!!”) and wished us luck! Soon we were heading down the trail. 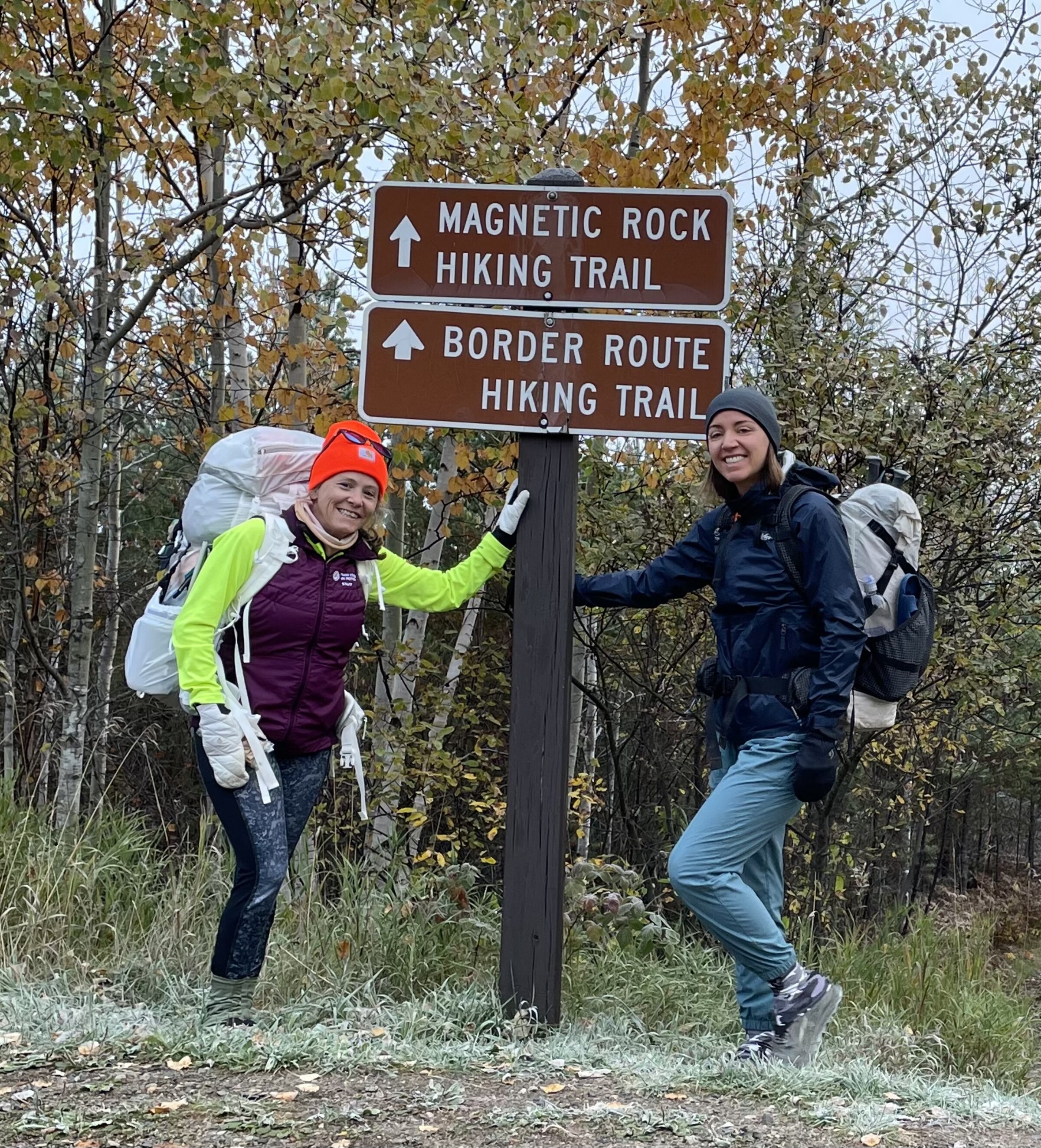 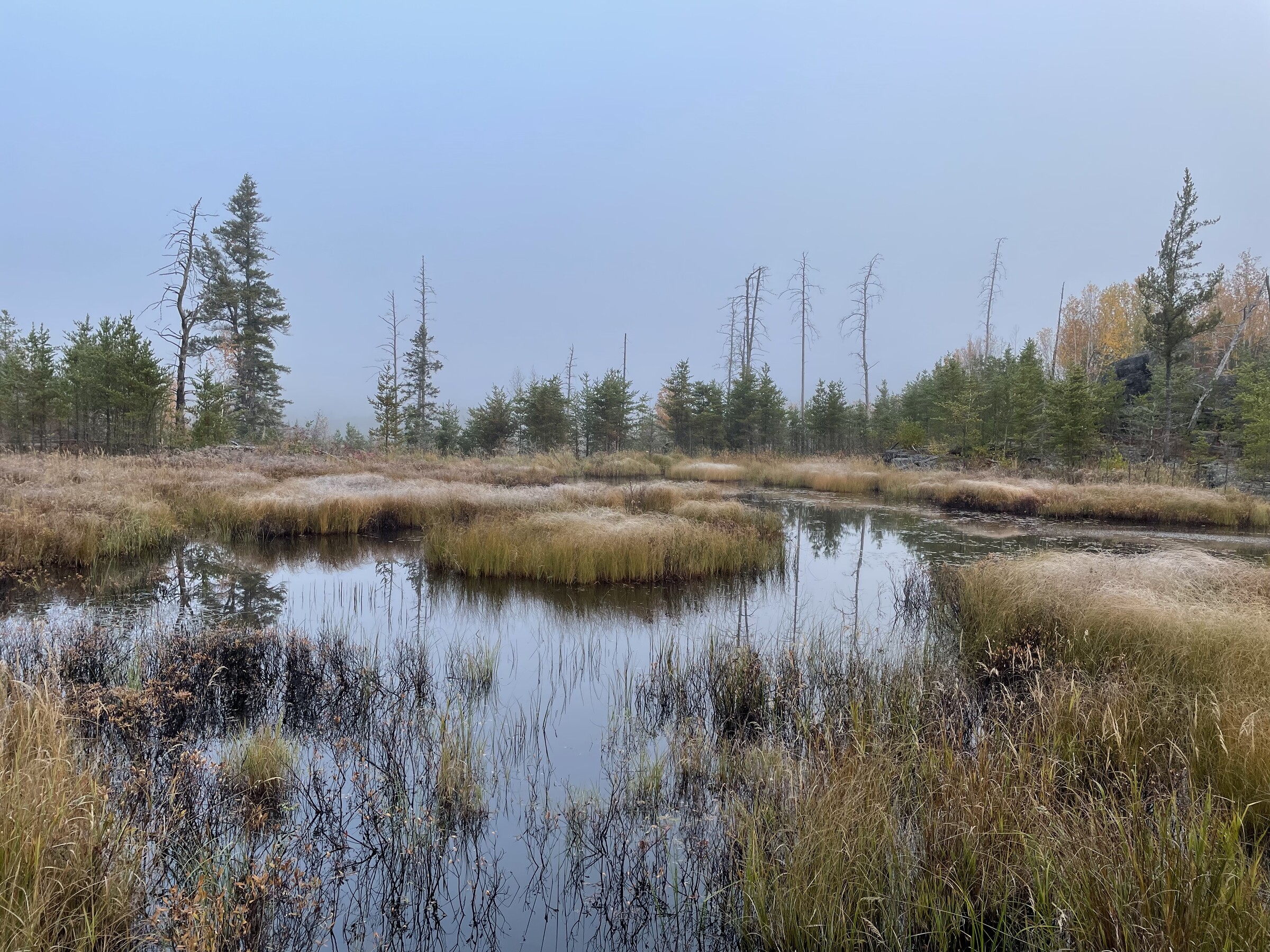 Our first 1.5 mile leg was to Magnetic Rock. An iron ore monolith in the middle of nowhere that is notorious for playing tricks on your compass. Of course I had to try it out, and it was the only time I used my compass for the trip. As I approached the rock it flipped my compass 180°. 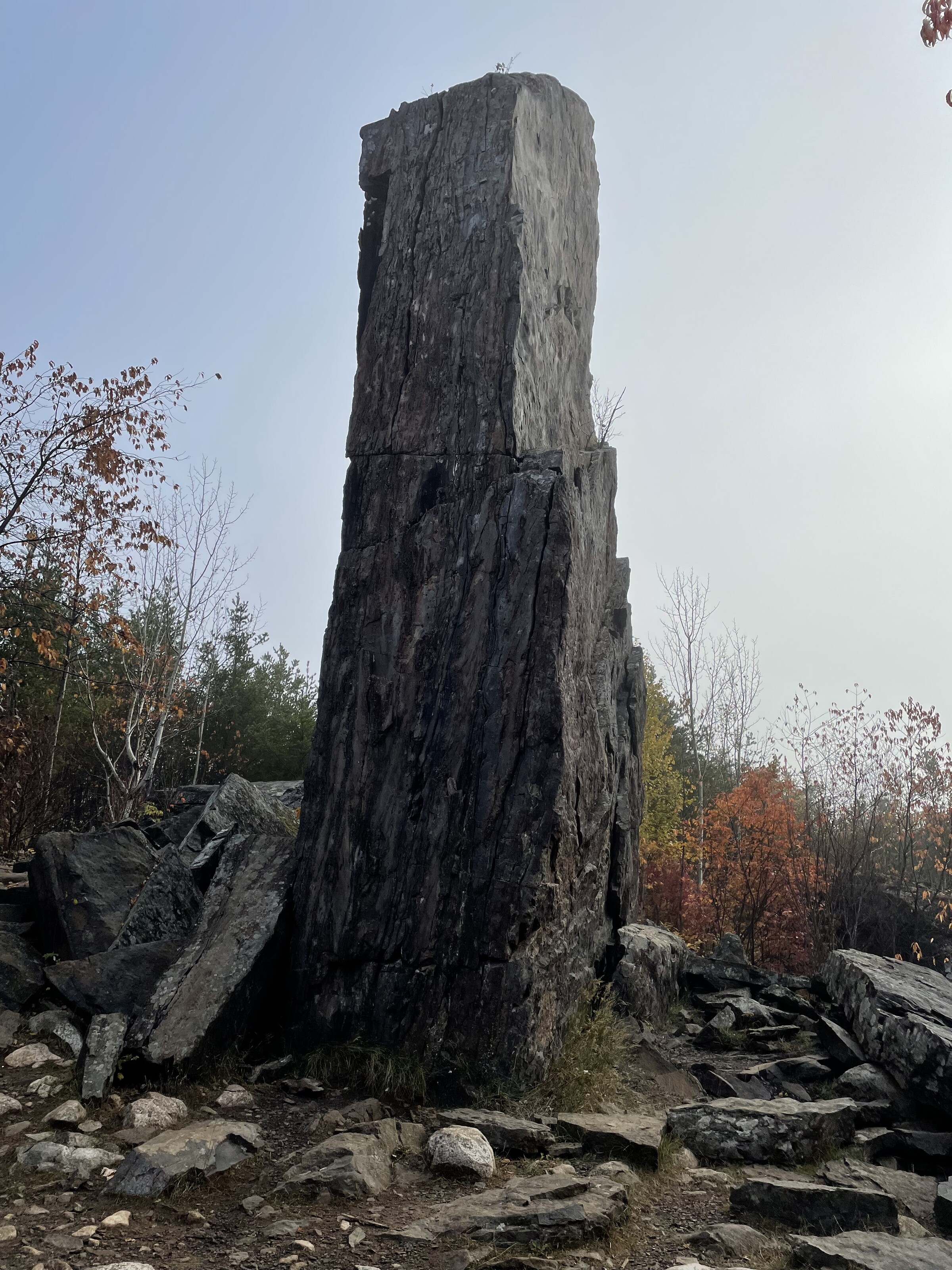 We started out just west of Gunflint Lake, directly north of Round & Ham Lake and traversed through the 2007 Ham Lake fire area. Soon we approached this giant beauty of water that we would be traveling along the south edge for the entire first day, into the next. 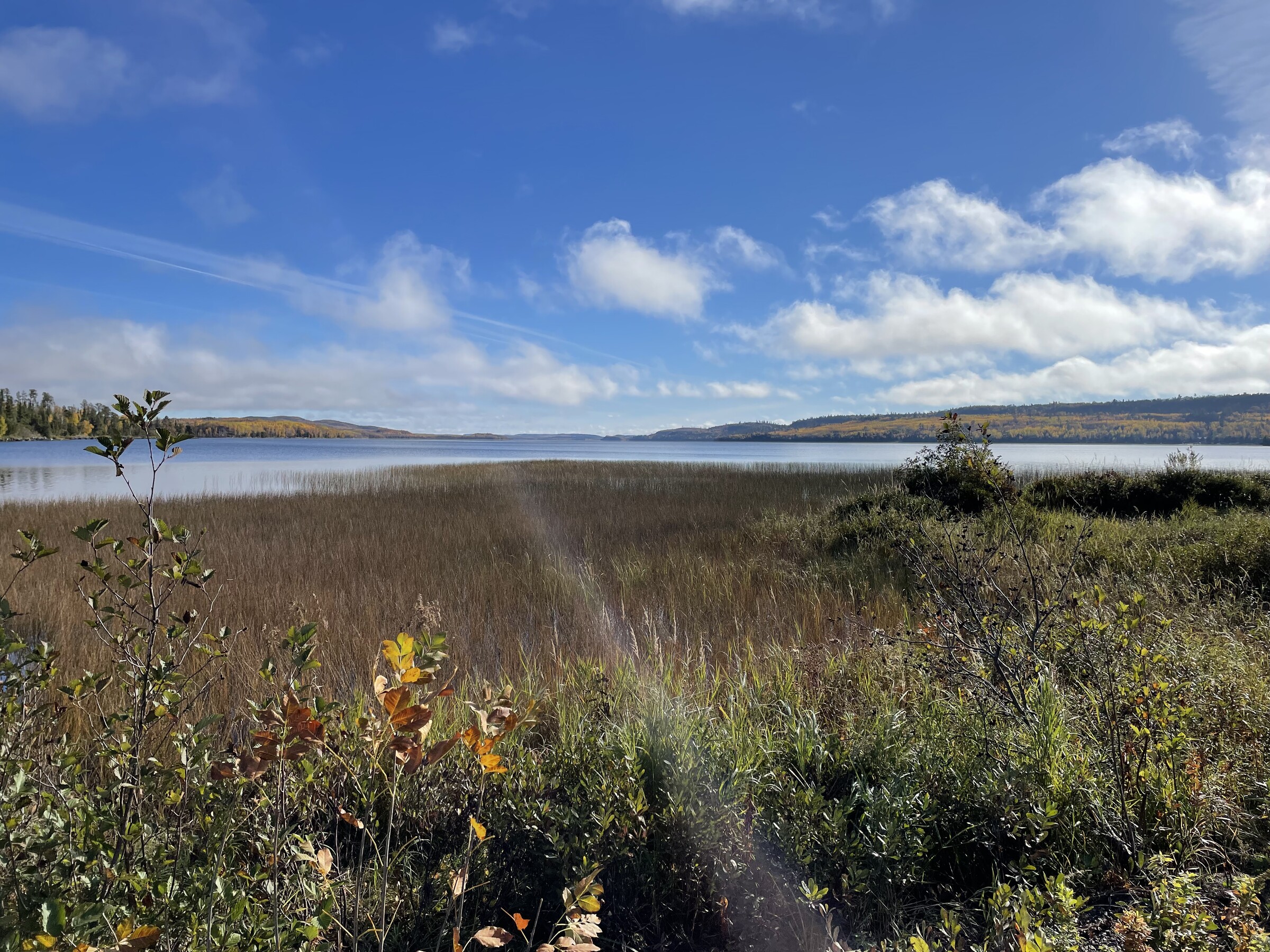 Although the skies were dry, the trail was surprisingly SOAKED from the morning fog that blanketed the land.

Some of the trails were slightly confusing as we had many XC Ski trails intersecting, and we even made one giant circle at one time getting lost for about 10 minutes. We quickly righted our wrong, and continued up the hill. 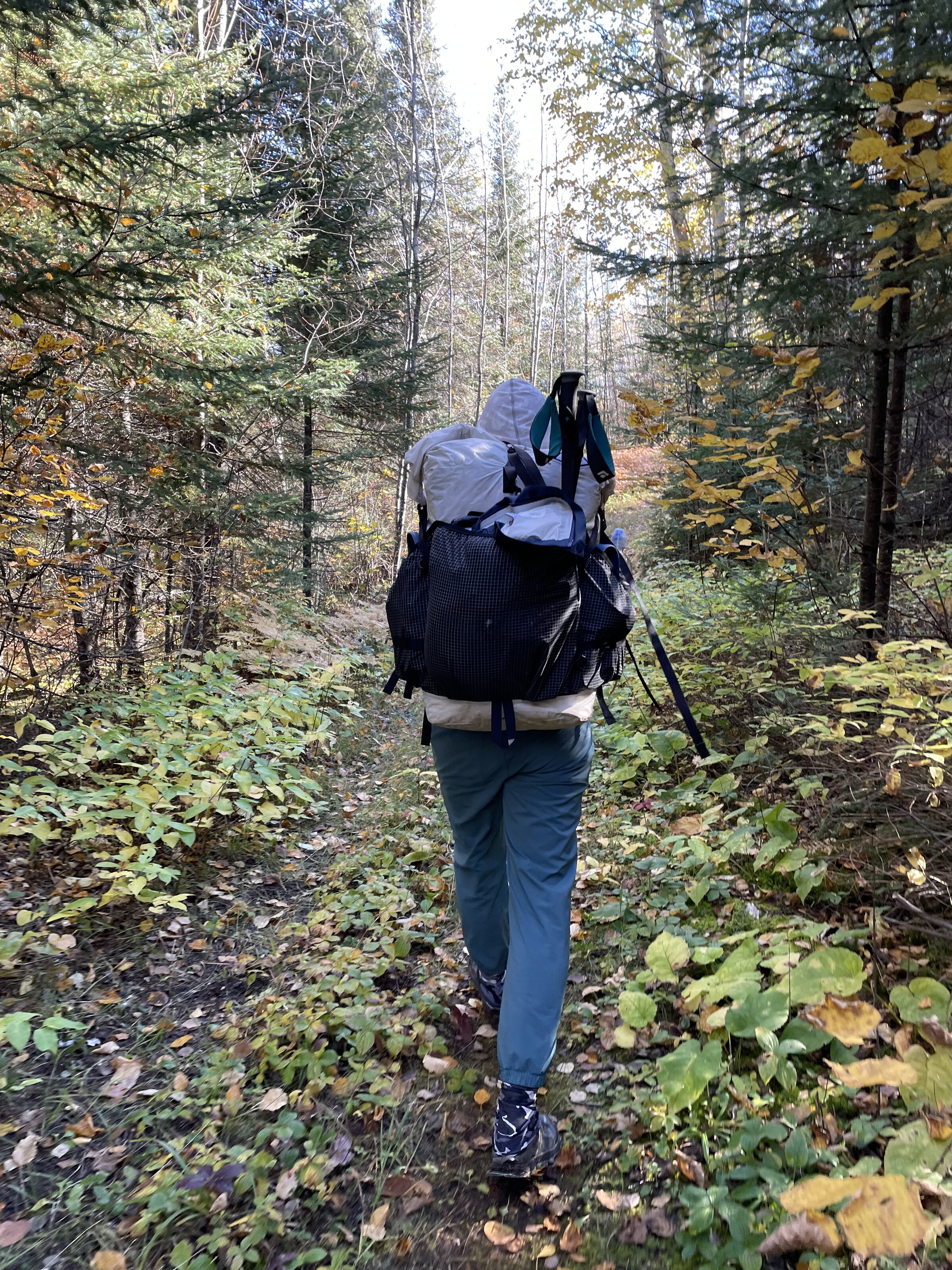 We heard some shotgun shots, and I was pretty glad for my blaze orange hat. We met a grouse hunter on trail, and he had a few bagged already! (This trail is covered in Grouse.) We saw a few other folks walking in and around the area, and soon we were on the Bryce-Breon trail heading to our campsite on Loon Lake. 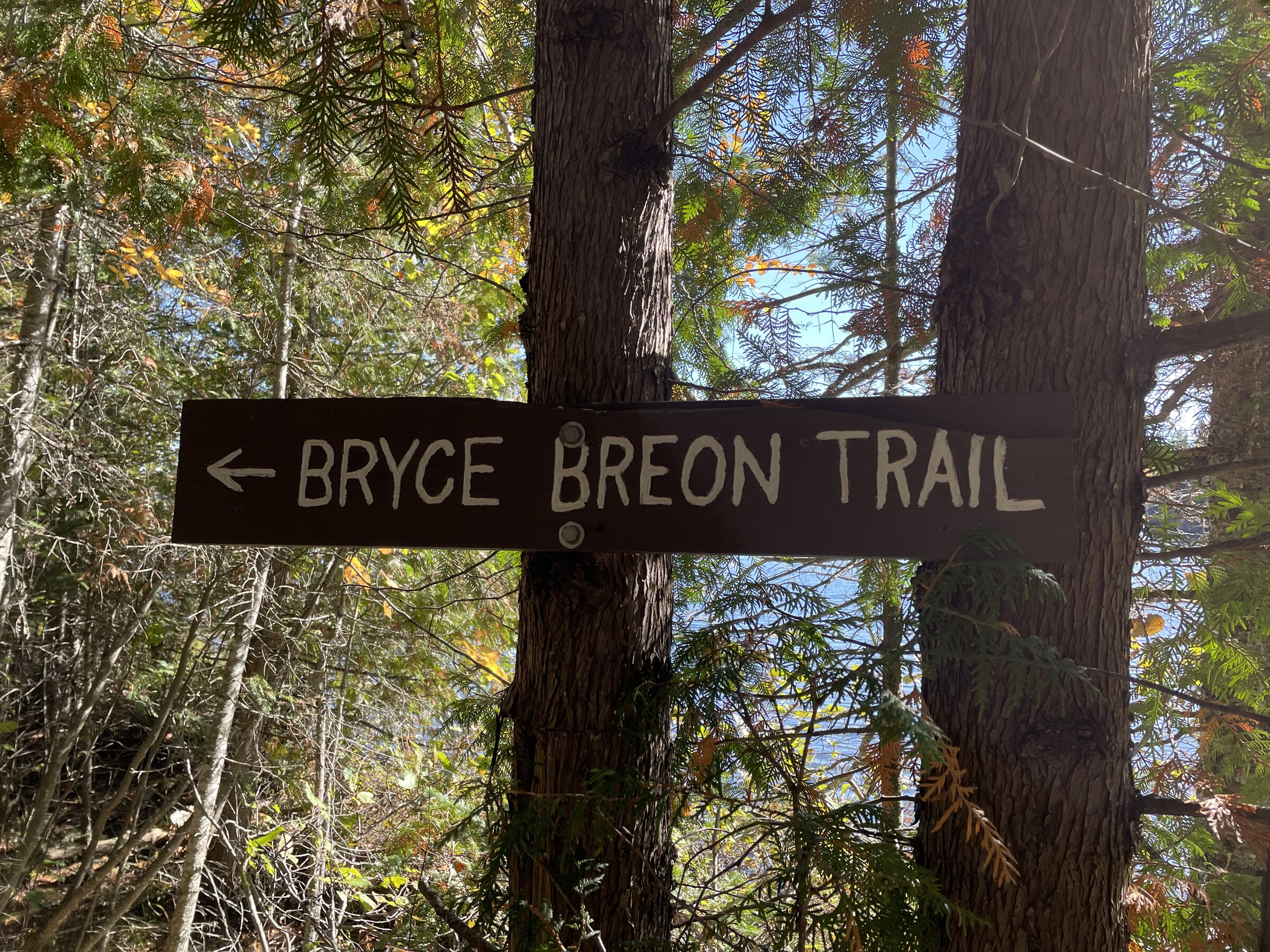 Our first day was set to be 9.2 miles but when we got to our (amazing) campsite around 1 p.m. we knew we should try to put on a few more miles. Originally we were going to take 7 days to hike the trail due to less sunlight at this time of year, but we began toying with the idea of making it in 6! Hmmm…

We continued up the trail and decided to disperse camp on Loon near a nice spot to get water. Interestingly enough near our makeshift campsite was also a set of trail side reclining chairs. Perhaps a motor boat hauled them over from a lodge on Loon? We would later sit in them post-dinner for a sunset lounge. 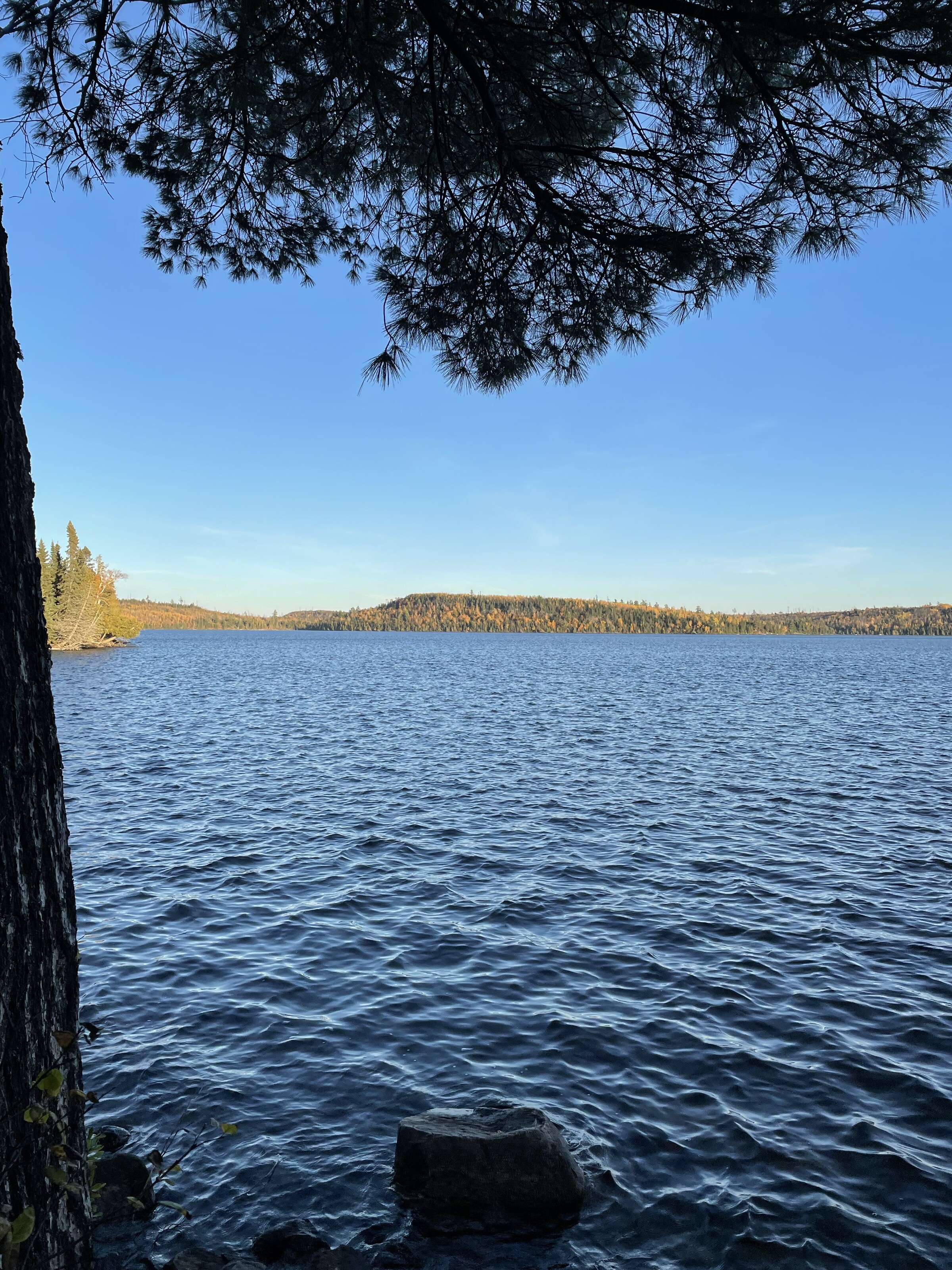 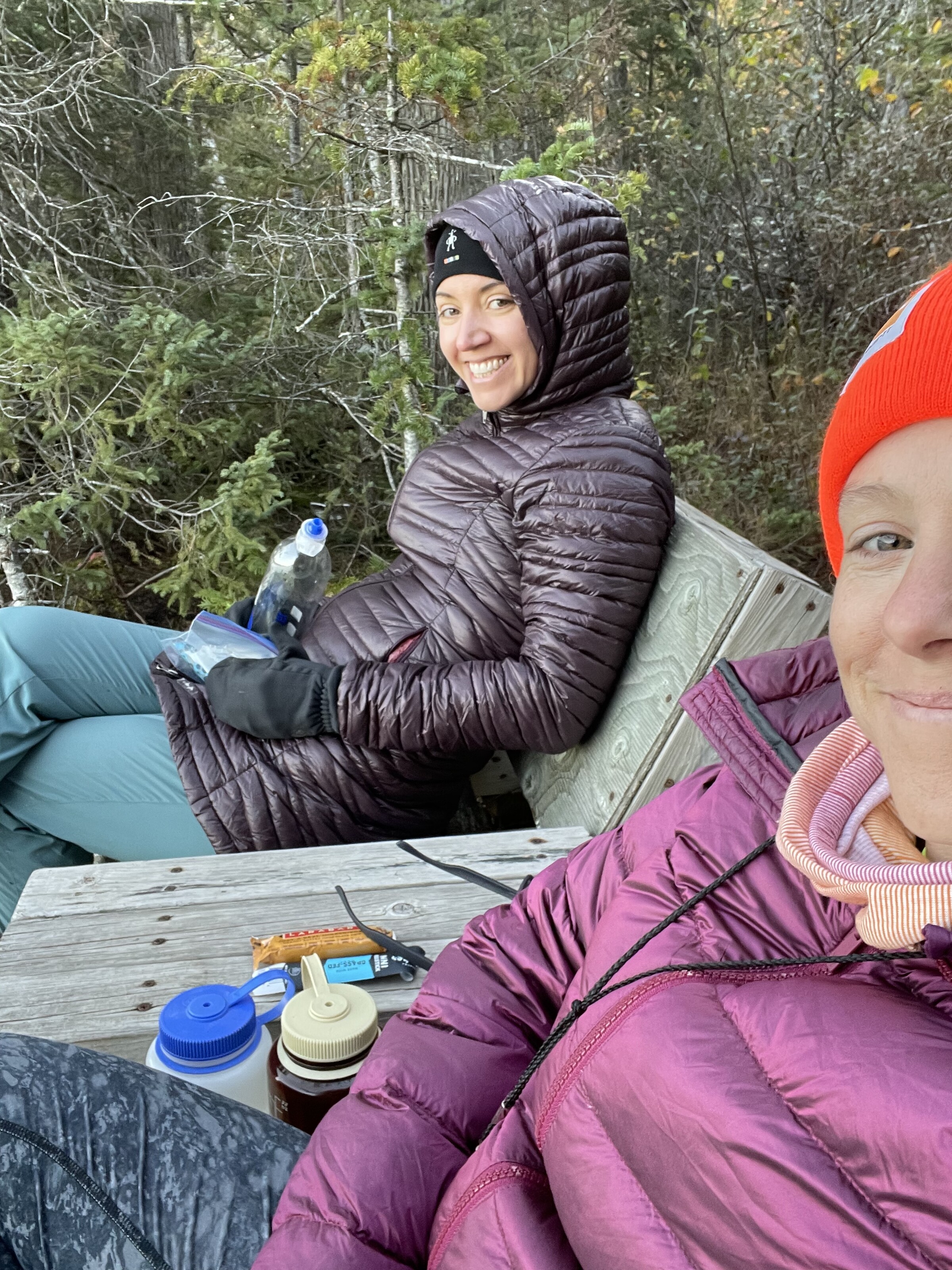 Tonight’s dinner was from Camp Chow - Pork Rice Alfredo. It was SO delicious, and I would absolutely have it again. Just cook in the bag, and no dishes need to be done before tucking into bed for the night.