Gear for the Boundary Waters, Quetico, and Canoe Camping Locations 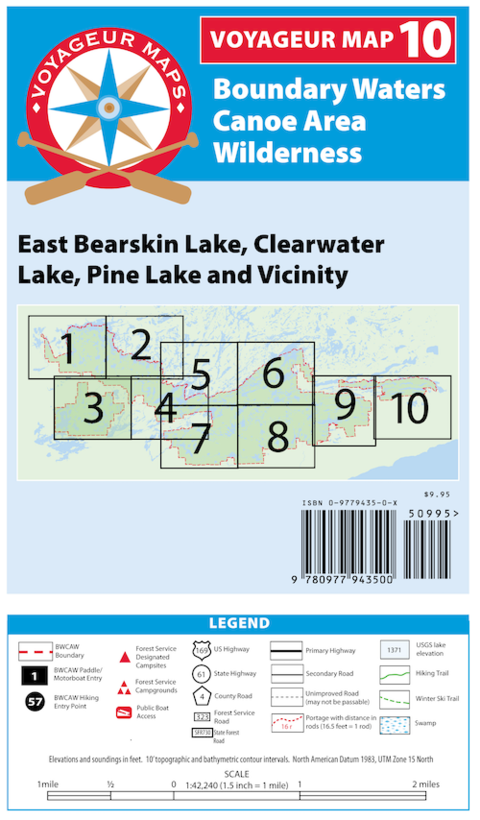 Voyageur Map 10 covers eastern portions of the Boundary Waters Canoe Area Wilderness (BWCAW), including Clearwater, East Bearskin, Pine, and Mountain lakes. Eight different water entry points are shown. Motorized watercraft are allowed within the BWCAW only on Clearwater and East Bearskin lakes, and then only with a 10 horsepower or smaller motor.

Most lakes within the BWCAW on Map 10 are long and thin, stretching from west to east between towering hills of gabbro bedrock. As a result of their shape and orientation, many of these lakes channel westerly winds down their lengths. Larger lakes, such as Mountain, Moose, Pine, and Clearwater are particularly prone to developing big waves when the wind is out of the west. Travel on these lakes is often best undertaken early in the morning before winds pick up.

The geology of this area also heavily impacts portage difficulty. Portages that follow a west-east axis, or connect the ends of lakes, are typically relatively easy. In contrast, portages having a north-south axis are often quite hilly and very challenging.

The most difficult portage on map 10 is certainly the 232 rod portage between Pine Lake and Canoe Lake. This portage climbs over 200 feet in elevation along a switchbacked trail. Fortunately, the path itself is relatively smooth.

The Border Route Trail, stretching across Map 10, provides some of the best wilderness hiking in Minnesota. In addition, other hiking and cross country ski trails are maintained along the west end of the Map 10, near Daniels, East Bearskin, and Flour lakes.