Trip Introduction:
After seven trips to Lake Agnes/Boulder River, we decided we wanted a different trip. We did some research and decided this would be a nice change of pace.

Since we weren't going in that far we took a more leisurely pace on Friday morning and were to the entry point by 9:00 a.m. Temps were in the low 50's but the wind was starting to pick up. Thankfully we had all of a 40 minute paddle to our campsite--1710 on the north side of Gabbro. We were all very pleased with the site and would rate it much higher than the 3 stars schweady gave it in his review. Even with a group of 8 we found three nice tent pads and the view from kitchen to the east was awesome. The only drawback to the site was the lack of downed cedar and pine for the cooking fire. We found some, but it was a haul to bring it back to camp.

After we set up camp the weather took a turn for the worse. The wind picked up and it started to sprinkle, but that only seemed to help the fishing. Buzz17 and I fished a pool just off the current between Gabbro and Little Gabbro, and in the course of two hours I limited out. The rest of our group tried other areas without a lot of success. We were, however, pleasantly surprised when one of the guys came back to camp with some nice perch.

Probably the excitement for the first day was my battle with the food pack. I overloaded it, so while we were hanging it the handle snapped and it body slammed me into a small rock wall. I survived, but I really felt like a moron. Live and learn to never stand directly below the food pack.

During breakfast we fished for northern from camp and the bite did not disappoint. One member of our group landed a 32" and a 34" northern about 15 minuets apart. Once we left camp, however the wind picked up and it never subsided. Instead, it only got windier. We went down to the rapids between Gabbro and Bald Eagle and had some luck with the walleyes. The real adventure began, however, on the way back to camp around 3:00 p.m. The wind must have been blowing steadily at 20 mph with gusts over 30 mph. After battling the wind and waves for 10 minutes and watching the approaching storm, my canoe partner and I decided to hit shore to wait things out. About five minutes after we stopped it started to rain and hail--it was about pea sized. With temps in the upper 40's or low 50's this was a real joy. Thankfully, this lasted for about 20 minutes or so and then the winds subsided to maybe 10-15 mph. Everyone in our group made it back to camp safely. That evening we fished with ciscos on slip bobbers from camp and caught several northern 30"+.

The temp dropped to 32 degrees Saturday night and Sunday morning was windy. In the morning we threw out slip bobbers with ciscos and I landed a 34" northern. But once we left camp, this was probably the slowest day of fishing. We tried between Gabbro and Little Gabbro without much success. And then tried several points in Little Gabbro with just a few small walleye. The wind finally subsided in the evening and the lake became glass. The best part of Sunday, though, was the moonrise and then the bite picked up from camp. Caught two nice walleye and a 14" crappie on slip bobber rigs. A few guys went out in the canoes and caught walleye, crappies and more perch. One of the perch was just over 12". A nice way to end an otherwise very frustrating day. 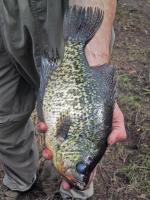 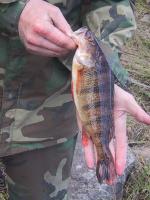 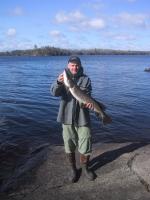 It got even colder on Sunday night. According to WeatherChannel.com, the temp dropped to 28 degrees. Thankfully I packed enough warm gear that it wasn't that bad. Temps rebounded to the 50's but once again the wind picked up and fishing during the day was slow. We fished the northeast bays of Gabbro and produced a few walleyes, but once again, the best bite was in the evening after the wind died down. We went up into the end of the northern most bay and found a school of walleye, crappie and perch.

Thankfully it didn't get as cold as it did the night before. I think the temp dropped to the upper 30's. The morning started out calm but as we packed up camp the wind started to pick up and by the time we hit the water the wind must have been blowing straight out of the west between 15-20 mph and we had to paddle right into it. Once we hit Little Gabbro, though, it didn't seem as bad.

Overall, we had a good trip despite the wind and unstable weather. Based on the feedback I've gotten from everyone in our group, we'll probably do Gabbro again next year. Hope you found this report helpful, if not interesting. If you have questions or want more info, feel free to e-mail me.