Number of Permits per Day: 6
Elevation: 1166 feet
Latitude: 48.0356
Longitude: -91.8301
On the Water- Monday July 20th-
On the water late considering how far we need to go today. Up the Horse river to the falls by 6pm. Started raining and NO campsites available. Mudrow-Alruss-Tin can Mike-Horse Lake-Horse River-Basswood. 13 miles by water. (not counting portages)

Mudro to Crooked Big Fun One One

Trip Introduction:
My June 2011 trip to the BWCA was to be slightly different from years past. Missing this year were my two brothers and my dad, unable to attend due to scheduling conflicts. Life can get in the way sometimes. They would be replaced by three friends; two with BWCA experience and one rookie.

Day one began at midnight as the crew from Rochester, MN picked me up in Cottage Grove and then we hit the road for Ely. We arrived in Ely at 4:30am, stopped at the gas station for a couple of breakfast items, and then walked into Voyageur North Outfitters as they opened the doors at 5:00am. After securing canoes, life jackets, paddles, and bait, we loaded our gear in the Voyageur North van and headed for entry point 23. The sun was shining bright and temperatures were comfortable on the drive out. A few mosquitoes greeted us at our entry point, but they were to be expected. We were paddling across Mudro Lake at 6:30am with a campsite between Wednesday and Thursday Bay on Crooked Lake as our afternoon goal.

Our goal for the trip was to single portage as often as possible to maximize our fishing time; the first 80 rod portage from Mudro to Sandpit Lake tested our mettle. Our trip rookie was unsure what he had got himself into and was questioning how much he was going to enjoy the trip after the physically demanding first portage. We assured him that would be the most difficult portage of the trip.

After buzzing across the glasslike Sandpit Lake with bright sun and blue skies we were on to the longer, but much less strenuous 160 rod portage into Tin Can Mike. Paddling with the rookie in my canoe, we decided to take turns double portaging, so we weren’t exhausted before noon.

We cruised across Tin Can Mike, very happy with the pace we were moving, and excited about the prospect of huge smallies waiting for us on Crooked Lake. A quick 80 rod portage into Horse Lake and we were relieved to be dealing with a crosswind, rather than a headwind on our way to the Horse River.

We managed to hit what seemed like every rock in the river, but eventually the rookie started identifying the boulders before we felt them. The rapids were a fun little challenge and the portages of 58 rods, 48 rods, and 73 rods were knocked out quickly. A short sandwich break on the last portage to refuel and we were paddling again toward Lower Basswood Falls.

The breeze was now starting to kick up and some clouds were blowing in, but nothing too ominous. After taking a quick peek at the falls, we were paddling toward our destination. We reached Table Rock at noon, and were greeted by rain and rough water. The wind was really getting to Nick and he wanted to set up camp for the day. We decided to stick with our original goal and made it to campsite 1856 by 2:30pm. We were done traveling for the day!

Thankfully, the rain was done for the day (and our trip) and we were able to set up a dry camp. We decided to have an early dinner of brats and Mac n cheese after setting up camp, so he could get out on the water and enjoy the fishing. The fishing was not as hot and heavy as in years past as we were unable to locate numbers of fish, although we did find some quality. This would end up being the theme for the trip. Nick and I were pretty tired from the day, so were returned to camp before dark and decided to call it a night at 9:00pm. Tyler and Andy remained out for the evening bite and were rewarded with a few fish.

The first night was chilly and I was happy to have packed a stocking hat last minute. After a full night’s sleep, I left the tent at 5:30am and was fishing from camp by 5:40am. No bites for two hours from camp wasn’t the start I had hoped for, so I started to get breakfast ready. Nick and I enjoyed a great breakfast of pancakes with blueberry infused Craisins and then hit the water around 8:00am. Tyler and Andy decided to sleep in and missed out on a feast. Our favorite way to fish is with top water Skitter pops so we began the morning tossing at boulders on shore. With nothing really going for the first hour, I decided to go subsurface with a shallow running crank and was quickly rewarded with an 18” smallmouth bass. I decided to try slip bobbering a leech on the first break line and quickly landed smallies of 18, 19 and 20 inches. Things were looking up!

We spent the afternoon exploring near Thursday bay and caught more smallies and a handful of pike. Nick caught a nice five pound pike that we put on the stringer for dinner. It was delicious and was the perfect amount of food for us. Tyler and Andy came back for the evening empty handed, so they headed out with leeches to try and catch a couple walleyes before dark. They did just that and cooked dinner with their headlamps.

After a fairly lackluster Thursday, we decided to fish our way back toward the falls and see if we could find some more active fish. Andy landed 18 pound pike top water which was his personal best, so the travel was worth it. We aimed for campsite 1865, but it was taken so we paddled on to the next available which was 1550. After eating a late lunch/early dinner we hit the water to do some more fishing.

The water was perfectly calm and begging to be pelted with top water lures. We arrived to our first bay and had a huge blowup immediately. Fish on! A little while later a 21” smallie would make it into our canoe. My new personal best! A couple high fives and some photos and she gave us a nice splash on the release. The evening produced a couple more bass and some small pike.

Saturday would be another big travel day, so we packed up the rods after breakfast and headed for Tin Can Mike. It was another gorgeous day, mostly sunny with mild temperatures and we made great time paddling and portaging. We arrived at Tin Can Mike mid-afternoon, set up camp, ate lunch, and hit the water looking for dinner. Nick and I had three huge largemouths come unbuttoned before we could land them, but at least we were finding fish. As usual, a couple small pike made an appearance and provided some entertainment. I put a mid-20” pike on the stringer for dinner and decided to try my luck with a slip bobber and leech. Bobber down, hook set, fish on. A very pretty 20” walleye provided on a nice tussle on light tackle; on the stringer it went. After paddling across to a different point; bobber down, hook set, fish on, repeat. 21.5” walleye added to the stringer and we are set for dinner. We fish for a little while longer and head back to camp.

After having a great dinner, Nick decides to test the water and try and wash the grime off his legs. I opt for the swim trunks and a cannonball from the campsite provides a good splash and lots of laughs. After the initial shock of the cold water, my body was happy to get cleaned off a little bit. The other three followed suit and campsite 2095 provided us with some good entertainment. 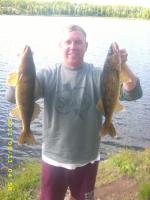 Sunday would be our exit day and Voyageur North was set to pick us up at 12:30 at the entry point. We broke camp, paddled across the lake, knocked out the 160 rod portage and decided to spend a couple hours fishing the deep and clear Sandpit Lake. I rigged up a tube jig for smallies and had one on almost immediately. A little 12” whipper snapper that caught the attention of a large pike. Next thing I know I am fighting two fish as the pike latched onto the smallie. Eventually I got the pike to let go and released to the smallie, likely to get lunched a short time later. A couple top water blowups but no hookups and our fishing for the trip was complete.

We packed up the rods, powered through the unpleasant 80 rod portage into Mudro and met the outfitter at the other end of the lake. Ice cold Hamm’s beer awaited us, delicious as always!

After getting cleaned up in Ely, we enjoyed a couple pitchers of beer and the Bucky burger at the Ely Steakhouse. The burger was outstanding! Although we had hoped to catch more fish, it was hard to argue the quality. I can’t wait to head back next year!