Trip Introduction:
6 of us headed out, 5 being on our first trip, into a loop we were sure would challenge all of us. It ended up being just as challenging as advertised plus a little more. It was a good trip with a lot of great sights, laughs, and good fishing.

4 of us left Wisconsin at about 5 am in my Ford Escape. I had just bought a Wenonah Jensen 18 a week prior so this would be its first action in the BWCA and my first lengthy canoe trip. We made it to Duluth right at 10 am and were making great time. I always love going over that bridge.

We made it up to Ely around 1 oclock and got checked into our bunkhouse, Ely Outdoors Company. I highly recommend this outfitter. Ryan is a great guy and he will make sure you're taken care of before you depart. The bunkhouse is really nice as well.

We left the next morning at about 5 am on our way up the echo trail to the Little Indian Sioux. We made it up to a small lake just as the sun was coming up and I captured this beautiful sunrise:

We continued up the gravel road and I got really excited that we were so close. I was probably driving a bit too fast.. Anyway we got to the entry point and unloaded all of our gear and traveled down the portage to the LIS. The water was glass and we couldn't wait to get going. On my way back to help my buddy Dan I realized we forgot something...THE LEECHES! I contemplated leaving them in the fridge at the bunkhouse and going with just artificial bait, but we didn't have very much. I decided to make the decision to make the 45 min drive back to Ely and grab the leeches. An hour and a half later we're back and finally taking off on the river. I immediately admired the way my canoe paddled very effortlessly even when loaded with a lot of gear.

It took us a couple hours to get up to the Pauness lakes, took a break at Devil's Cascade(which wasn't much because of the low water), and ate an early lunch. We got to the shell lake portage to find it fairly muddy but not a problem to portage. Cruised through shell lake into little shell. Little Shell is a beautiful little lake. We almost stayed there but we wanted to get up to the campsite on Lynx near the portage to Hustler. We paddled through the "portage" from Little Shell to Lynx lake very smoothly. The campsite we wanted was open and it was great.

After we set up camp we set out to fish and hopefully catch some walleyes. We caught plenty of eyes. My buddy's biggest was 25" and I pulled in a giant smally probably around 6 pounds. 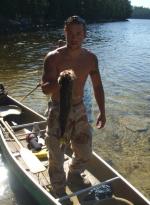 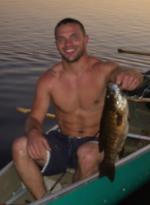 We had great fishing on Lynx and liked our campsite so much we decided to stay a second night. The fishing wasn't as good the second day but it was decent. Nothing to show off. We decided we'd head out early in the morning and head towards Hustler Lake.

It was a good hike to Hustler Lake but it was worth it. Hustler is a beautiful lake with some good northern and bass fishing. We spent one night there, and encountered a giant snapping turtle. Easily the biggest I'd ever seen. Must have been at least 40 pounds.

The next morning we headed towards Ge-be-on-e-quet lake. About the time we got to Rocky lake it began to rain pretty heavily. No time for pictures through here as the wind was howling and we were eager to get to our next campsite. I can see how these lakes would be very majestic on a nice calm night. It seemed to take forever to get through Rocky and Green because of the wind but we finally made it to Gebe. Of course the 2 best camps are taken so we had to travel to the northern part of the lake to find another. At first glance our camp was not the best looking, but after setting up a couple tarps and fixing the fire pit a bit better it was a good looking site. We spent the rest of the day lounging and had a big dinner. The rain let up an hour or so after we set up camp. Great night, had some whiskey as well.

The next day 4 of us went on a day trip to Lac La Croix to check out our portage and Gebe Creek. Also to do some fishing. 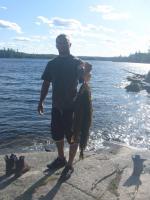 We stayed one more night, had some more whiskey, watched the stars and had a beautiful night. Probably our best night of the week.

The next day we headed through Lac La Croix, beautiful lake. Had some fun a long the way.

Found a nice campsite a couple miles past Fish Steak Narrows near Boulder Bay. It was up on a rock and provided a great view. We decided this could be our last night so we all came up with the bright idea of finishing the everclear(didn't happen) but we still had a blast.

The rain really came down on us that night but my tent stayed nice and dry. Got up in the morning with a headache and packed up camp to get to at least Nina Moose Lake. We seemed to have plenty of energy so we figured we'd leave early and catch the Packer game that night :).

EXCELLENT TRIP! ALREADY PLANNING MY NEXT ONE! Thanks for reading!